The Medicine Man of Chiapas 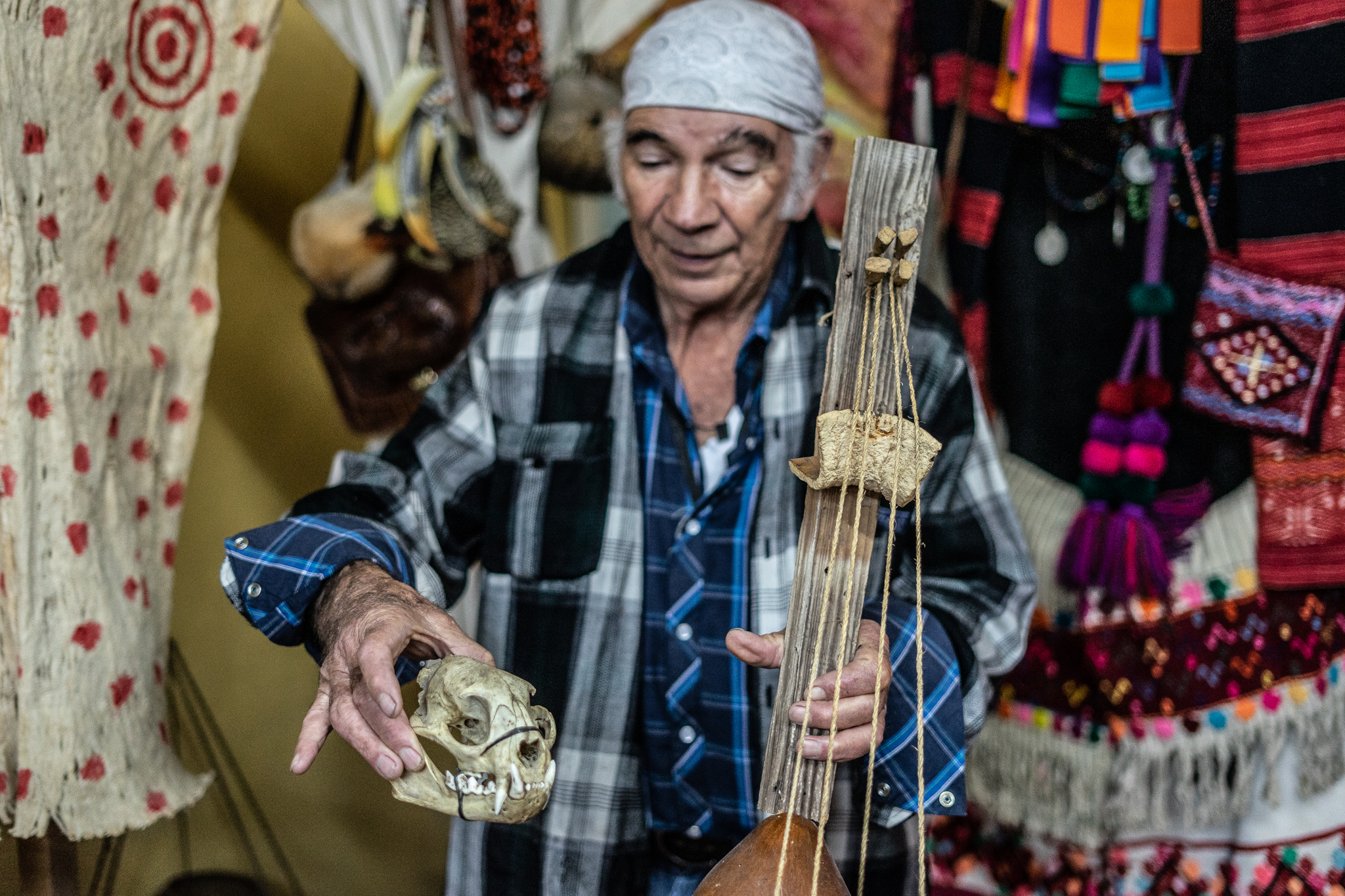 When I enter the house of Sergio Castro in San Cristobal de las Casas in Chiapas, Mexico, a young child is having his burns treated in the large, open-air courtyard by a man in a tattered, checked shirt and jeans, who has a white bandana wrapped over his head.

The sign above the doorway I just walked through says ‘Museo’, but this is not your average museum. This is also a clinic, where the man in the bandana treats those who can’t afford to pay for treatment in the hospitals, a job he has been doing without fail for the last fifty years.

That man in the bandana is Sergio Castro, known by those he cares for as Don Sergio, and labelled by the media as El Andalon, The Healer.

He is the medicine man of Chiapas.

The House of Sergio Castro

As a tourist, you will only find Sergio Castro if you know where to look. He opens the small museum in his house – which is also his clinic – for visitors, but only for a few hours each day and by appointment only.

The outside doorway is simply labelled number 38, and it looks like any other house in the city of San Cristobal de las Casas, except for the steady stream of people walking in and out. Only when you enter, do you see the sign informing you that you are, in fact, in the right house.

The locals though, the villagers who travel down from the hills to see Sergio Castro, know exactly where to find their healer, especially when they are in need of his talents.

“Buenas!” Says Sergio in greeting when he looks up from his work and sees me standing awkwardly in the entrance, as I wonder if I’d arrived at the right time.

I knew his museum was also his clinic, but I hadn’t expected it to be this busy in the evening when he has invited me to call in.

More locals file through the door as Sergio directs me into one of the large rooms, switching on the lights to reveal a vast collection of indigenous outfits he’s collected from the different Mayan groups in Chiapas.

“Take some pictures, and I’ll be with you when I can”, he says in English before returning to his patients.

Don Castro has been helping to provide minor treatments for the people in San Cristobal for decades. Most of his patients arrive from the surrounding villages, with burns or scolds or diabetic ulcers.

He doesn’t take payment and instead relies on donations from the few visitors like myself, who call in at his museum and from outside fundraising through his charity.

Over time, Sergio has collected traditional clothing from almost all of the different Mayan villages in Chiapas. This is the southernmost state in Mexico, and it’s home to the largest percentage of indigenous populations in the country.

Many of the items were donated by patients, in thanks for his care. Now, while Sergio was treating injuries outside, I was faced with an impressive display of indigenous clothing and objects to peruse.

Although the general term ‘Mayan’ is used to describe the descendants of the pre-Colombian civilizations that existed in Central America before the arrival of the Spanish in the 16th century until now I hadn’t realised just how broad a term this is, encompassing hundreds of different cultural, ethnic, and linguistic groups.

Arrayed around the room were outfits and clothing of different designs, materials and colours that were all very distinct from one another.

The diversity in Chiapas alone is staggering with each rural area having their own unique customs and clothing, and some with more autonomy from the federal government than others.

Sergio was probably the best man in San Cristobal to explain more, and after he had treated the last of his patients in the courtyard, he showed me around the museum and the clinic.

The Indigenous of Chiapas

“In Chiapas, around 2 million of the 5 million people that live in the state are of indigenous descent”, he tells me as we wander around his small museum.

“This one”, he points out a thin, white outfit decorated in red spots and circles, “is from the Lacandon group. There are only 600 or so people left, near Palenque, and they still speak Maya. Their clothing is very thin because it’s very humid there”.

Across the room, he shows me the heavy woollen outfits of the Chamula people, who live in the hills just up the road from the city of San Cristobal, a place that Don Castro regularly visits. “You know, up there they are living at over 2200 metres, so their traditional outfits are much heavier and warmer than the lowlands”. The Chamula speak Tzotzil, a local language which Sergio is proficient in, amongst the many other languages he has also learned over his years of providing treatment.

Sergio shows me through several smaller rooms, laden with gifts and souvenirs collected from across Chiapas, including Jaguar pelts, instruments handcrafted from wood or animal bones, and even old cameras and different currencies left behind by visitors from across the world.

In the background, his assistants have been helping a new patient, and before long a man comes over to shake Don Castro’s hand and to give him a pack of cigarettes as thanks.

The Medicine Man of Chiapas

“I’ve been doing this for fifty years now”, Sergio tells me in the courtyard after he’s given me the grand tour of his clinical museum.

“In the villages, they are very poor and in Mexico, there is little healthcare. So I do what I can”, he tells me humbly.

“I can only treat minor injuries though, anything worse and I have to send them to the hospital. There are lots of burns because, in the houses, the cooking pits are open, and the children will be playing around in the kitchen and get hurt easily”.

Local religious ceremonies also make heavy use of fireworks as part of the rituals, many of which are homemade.

“There are lots of burns from fireworks too, if they explode in the hand or if someone has had too much to drink during celebrations”.

And it’s not just burns and scalds he helps with, but over the last fifty years, Sergio explains how he has helped to build schools in the villages and improve farming techniques, by raising money and pitching in with the manual labour himself.

He opens his clinic at least 6 days a week and has become a respected figure amongst the indigenous communities for his selfless help and devotion, frequently travelling out to villages to treat those who can’t leave their homes.

With the last patients for the evening having left, I realise it’s past 8 pm on a Friday night, and knowing that Sergio has been working tirelessly all day, I thank him for his time, leaving my own small donation on the way out.

His work though, never really ends, and the next day, I knew that the Medicine Man of Chiapas would be needed again.

Sergio Castro allows visitors to visit his Museum, which is also his clinic, by appointment only. In practice, this just means giving him a call on the number below. He opens his Museo de Trajes Regionales up most evenings, between 5.30 pm and 8.00 pm. This is also when he keeps his clinic open for the locals too. Entrance is by donation only, and you can give as much or as little as you’d like.