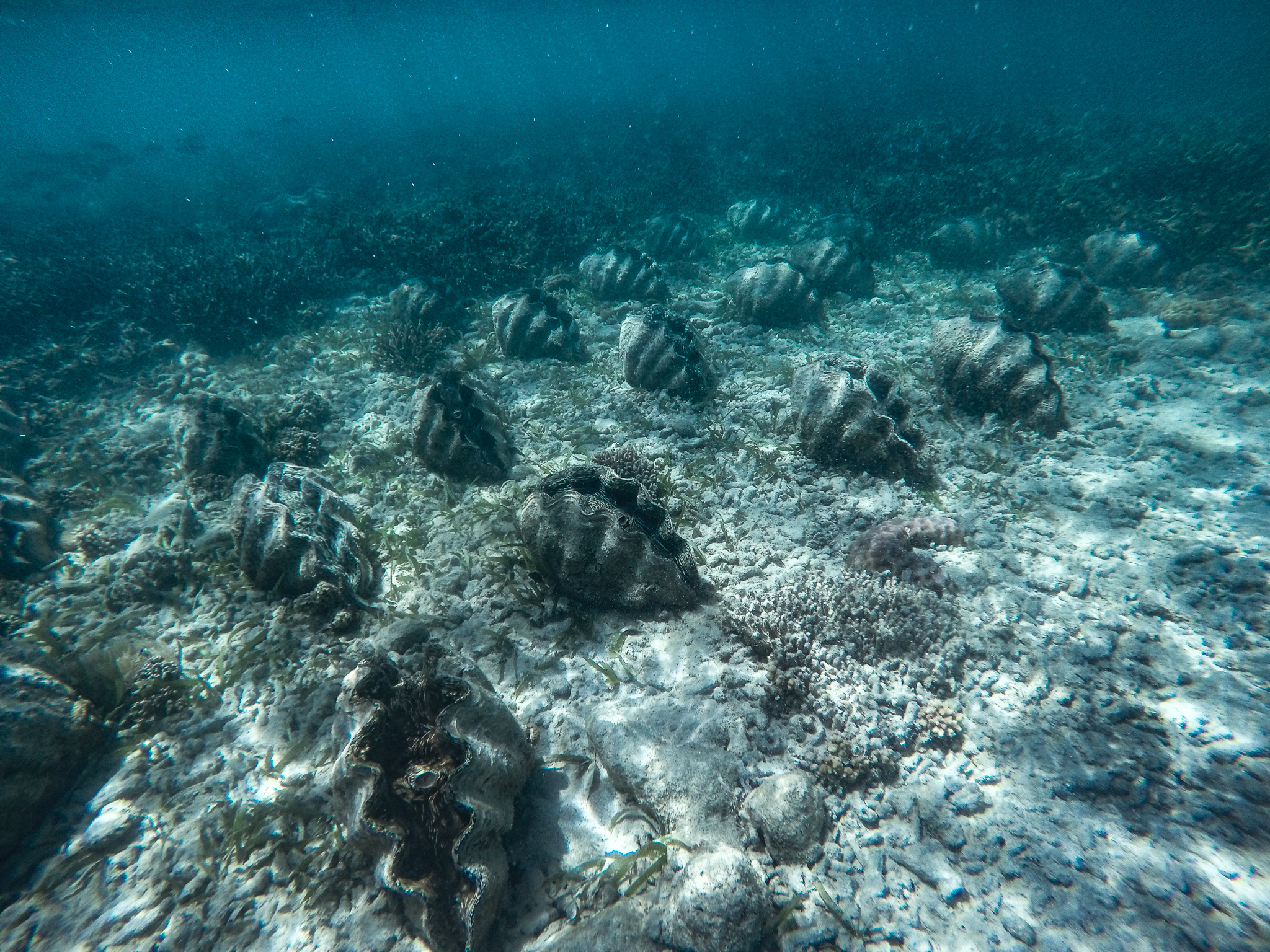 I’d never even seen one giant clam before, but here I was with the opportunity to go all out and see hundreds for the first time. This was exciting. I had no idea how big a giant clam really is. I mean who does until they’ve seen one? And now I was being informed that on the other side of Camiguin Island, there was an entire sanctuary dedicated to the preservation of Giant Clams.

I was supposed to be checking out and leaving Camiguin for Bohol the next day. I didn’t particularly want to depart this beautiful island anyway, and within seconds I’d made the executive decision to stay on and to visit the Giant Clams first thing in the morning.

He seemed bewildered at my enthusiasm for clams. I suppose for some, once you’ve seen one giant clam, you have seen them all. But I knew little of clams yet. 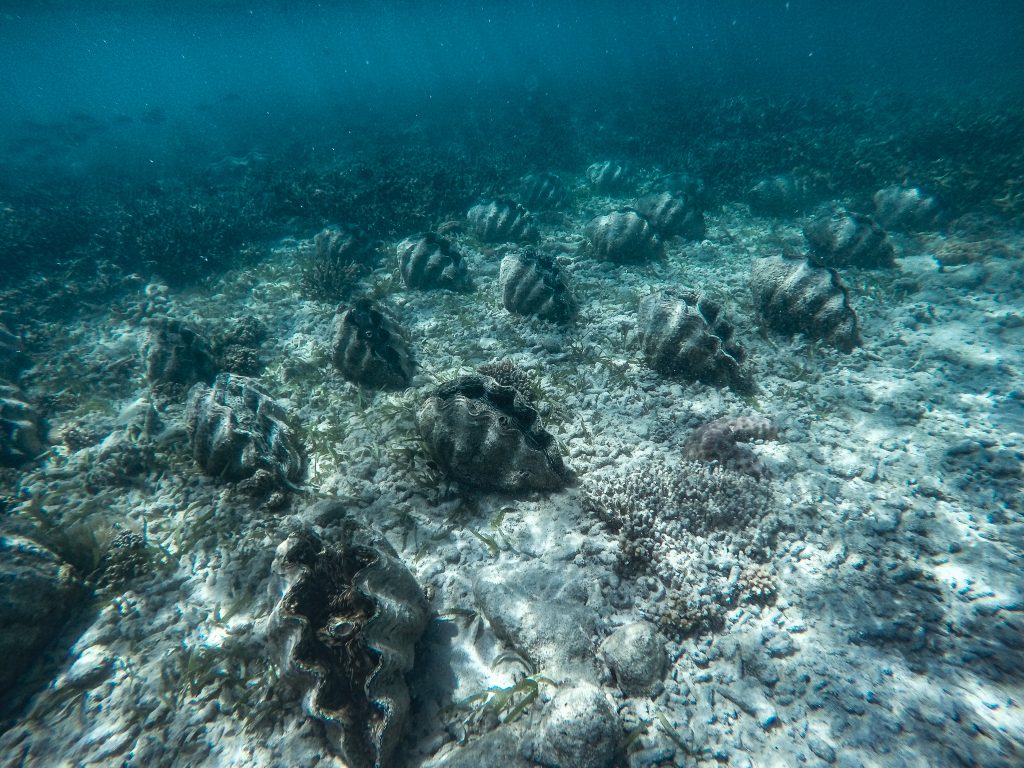 I knew little of clams, and I’d never seen one before, because these incredible sea creatures are actually very much an endangered species.

Giant Clams thrive in shallow coastal areas, and the reef at the far end of Camiguin Island in Northern Mindanao was perfect for their survival. These huge sea creatures can grow to four feet in length and, I found out soon enough, could even live to ages of over 100 years if they were lucky enough to survive.

At the southern tip of Camiguin is Kibila White Beach, a beautiful stretch of pure white sand. Not the whitest on Camiguin, that accolade goes to the appropriately named White Island at the other end of the island, but certainly white enough to dazzle me as I parked up the motorcycle and walked into the sanctuary.

This Clam Refuge was the place that had got me all excited the evening before and here I was, walking along this beautiful beach and being guided by a local school kid through their family’s long lasting, personal cooperatives. 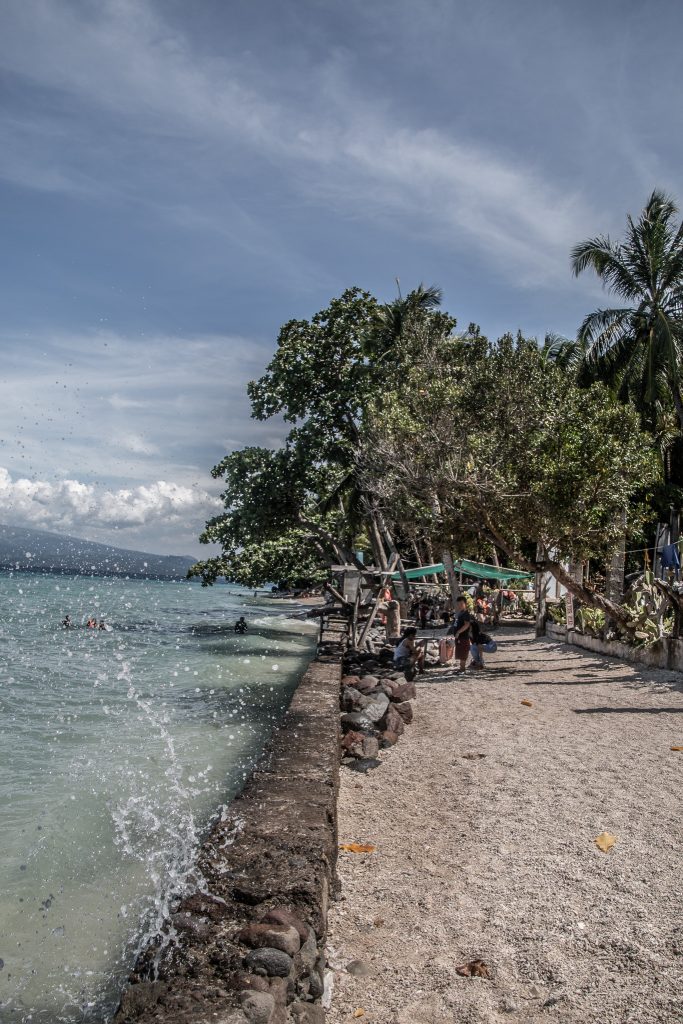 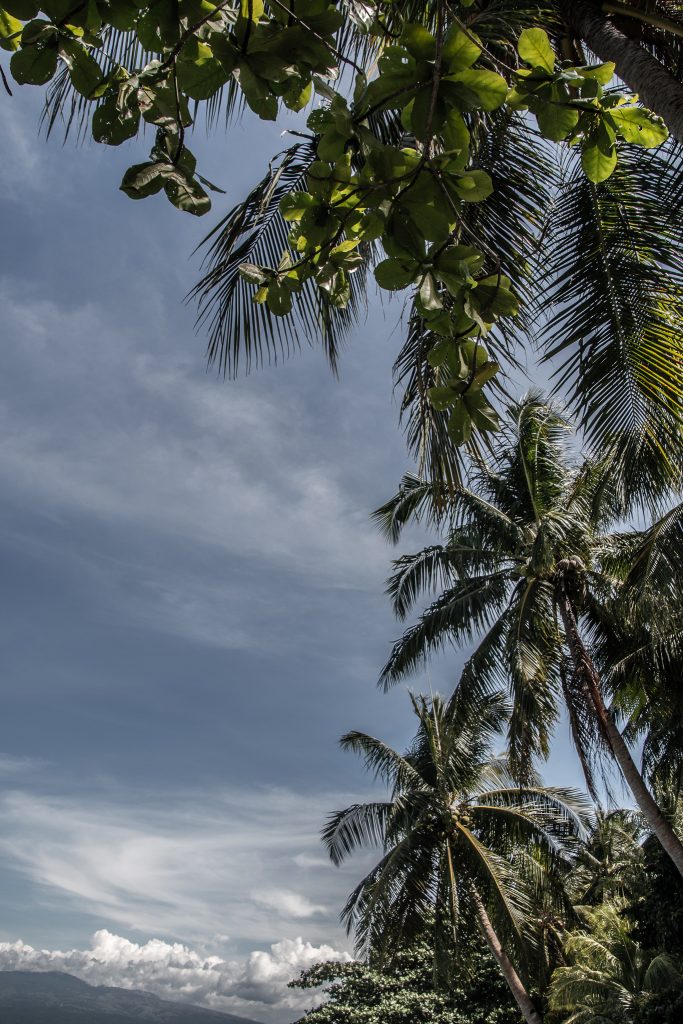 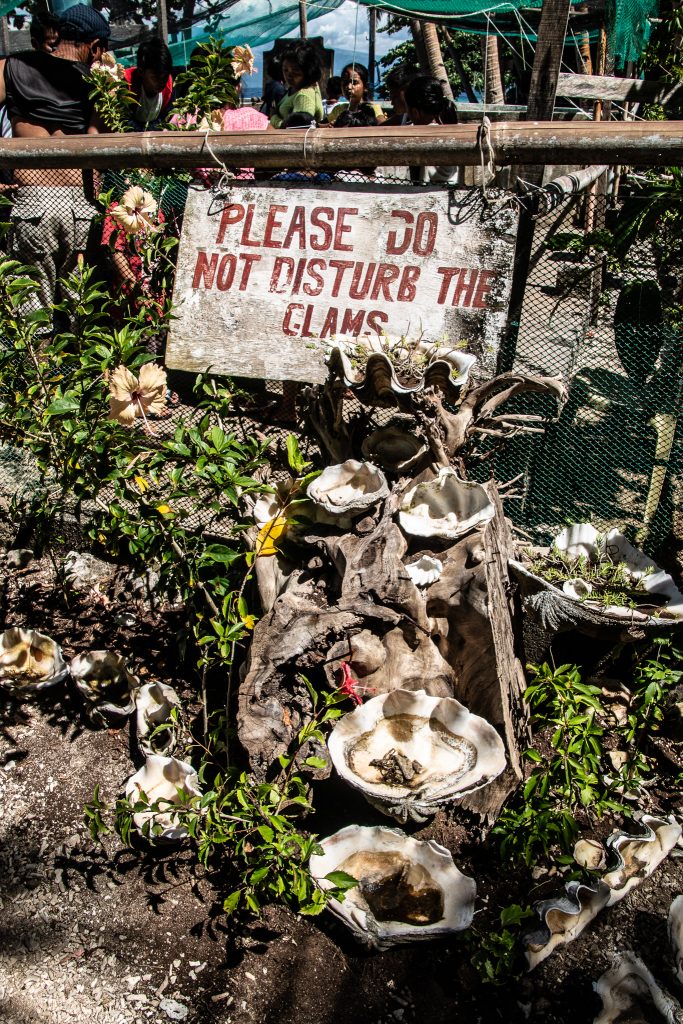 A Walk Through The Clam Sanctuary

My guide was just ten years old. He probably should have been in school, but the way he was reeling off facts and figures in perfect English gave me the impression that perhaps he was already too good for school. He showed me the huge concrete tanks where they grow certain clams,  and allow them to reproduce, before moving them out into the coral reef off the shore. This ocean nursery is home to hundreds of individual Giant Clams of various size that are protected and nurtured in the sheltered waters around the bay.

This entire sanctuary started as a family run affair to protect the few remaining Giant Clams in the water here, and years on the sanctuary is still very much a local affair, with the guides and staff all being from the Cantaan area nearby.

The concrete tanks are used to grow pearl producing clams as well as nurturing Giant Clams, and the sanctuary was set up, primarily out of a love for Giant Clams, but also as a way to provide various income streams for the local villages, from tourism and pearl farming. 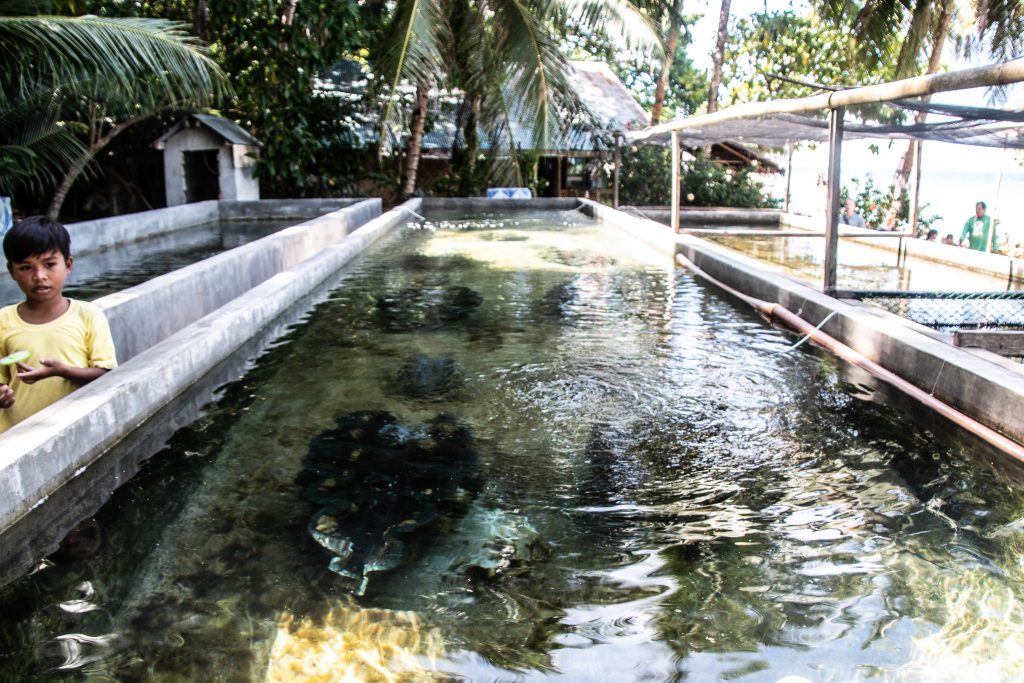 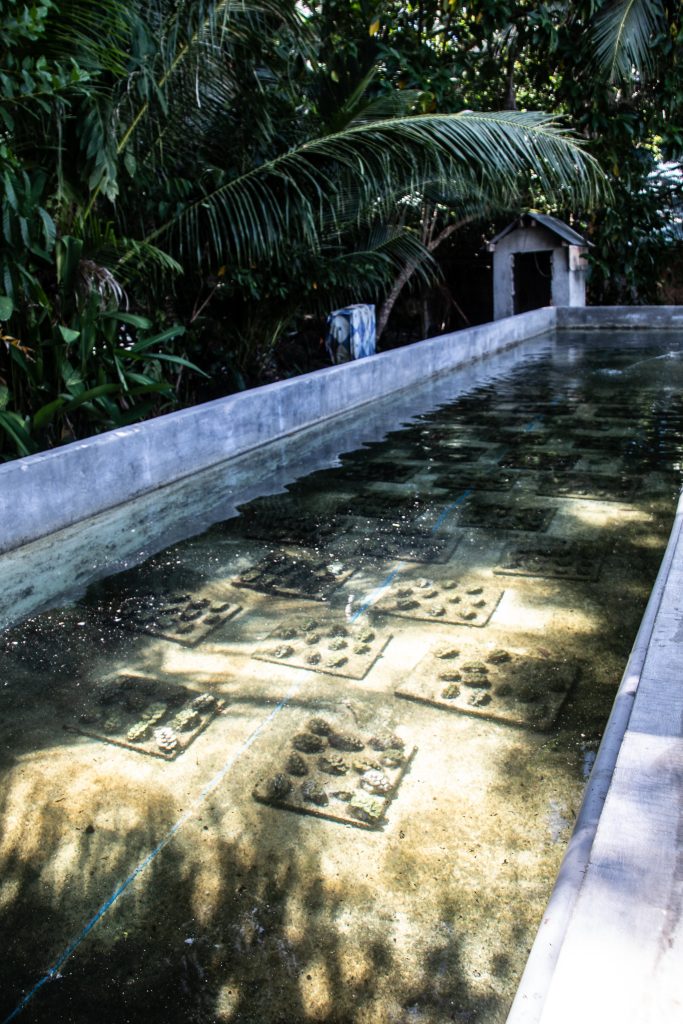 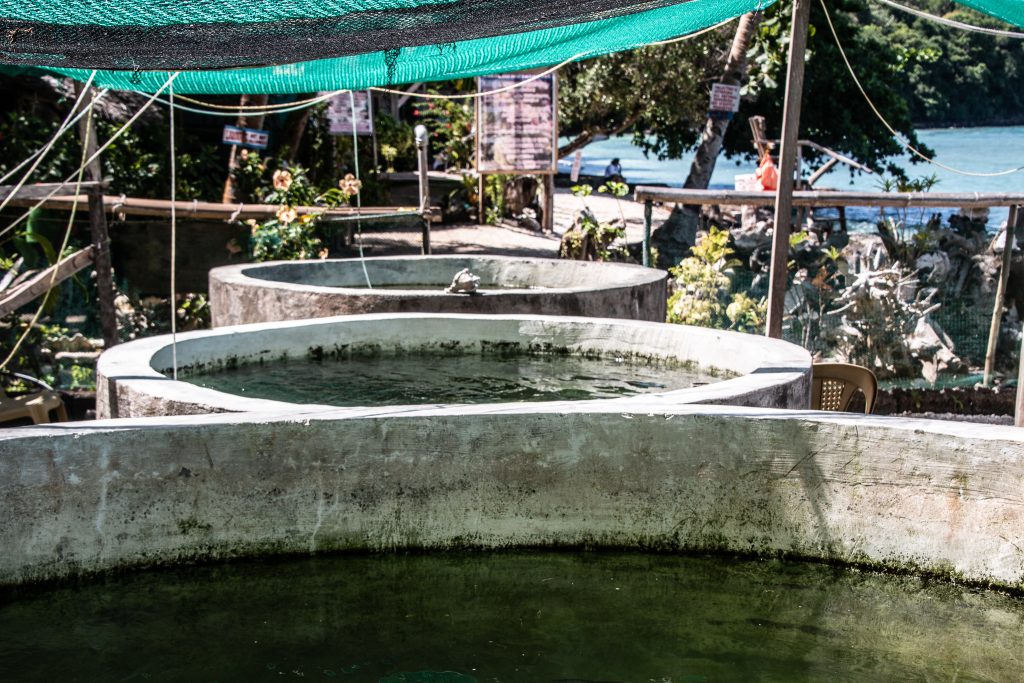 My young guide, after showing me through the tanks and Clam growing areas told me that I should snorkel out to the reef, and to the offshore Giant Clam ‘farms’ where I could see hundreds of these peculiar creatures living and flourishing in the water.

The Giant Clams live on the coral reefs and are bottom dwellers that allow algae to live within their tissue and shells. The algae photosynthesize and the Giant Clams consume the byproducts of this photosynthesis to grow themselves and to achieve their exponential size.

I strapped on a mask and snorkel and was taken out into the open ocean by my snorkelling guide, another young local who worked here in the cooperative taking tourists out to visit the ocean nursery.

We walked far along the white sand beach, under the palm trees, before we entered the sea. The water here was shallow and sandy, and the clams that were growing here on the sparse coral and seabed were small and young, no more than 6 months old. Many of them could live for another hundred years, some even longer.

This was extraordinary though, I was seeing my first Giant clams in the open ocean and the colourful clams shrank and expanded in and out of the opening of their shells as I moved along the rows admiring these strange creatures. 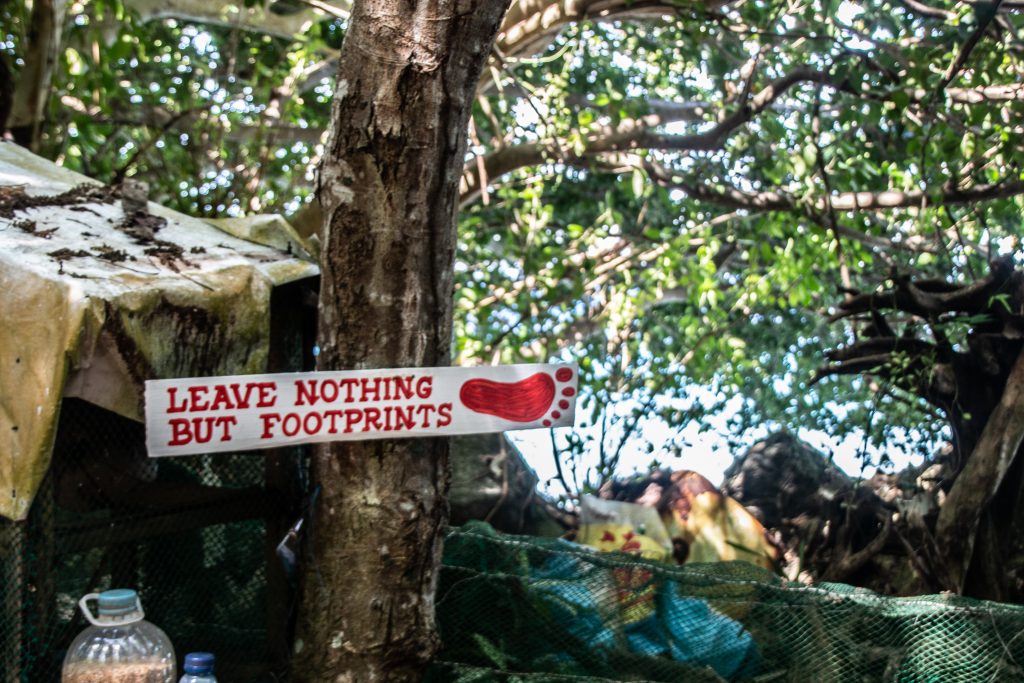 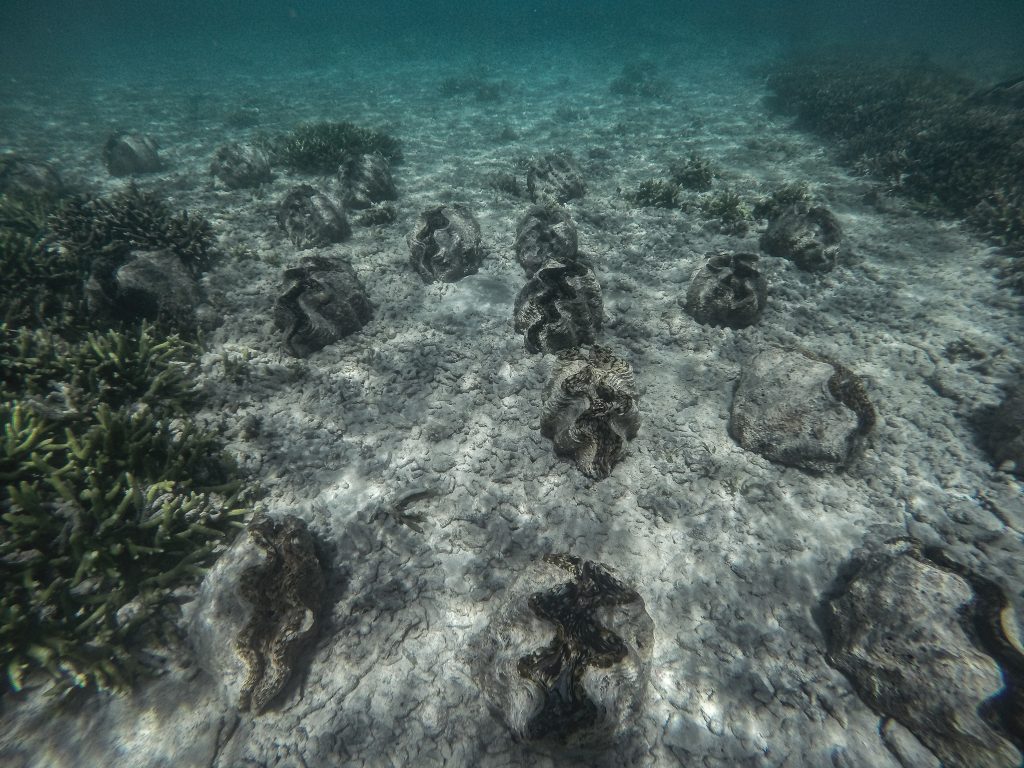 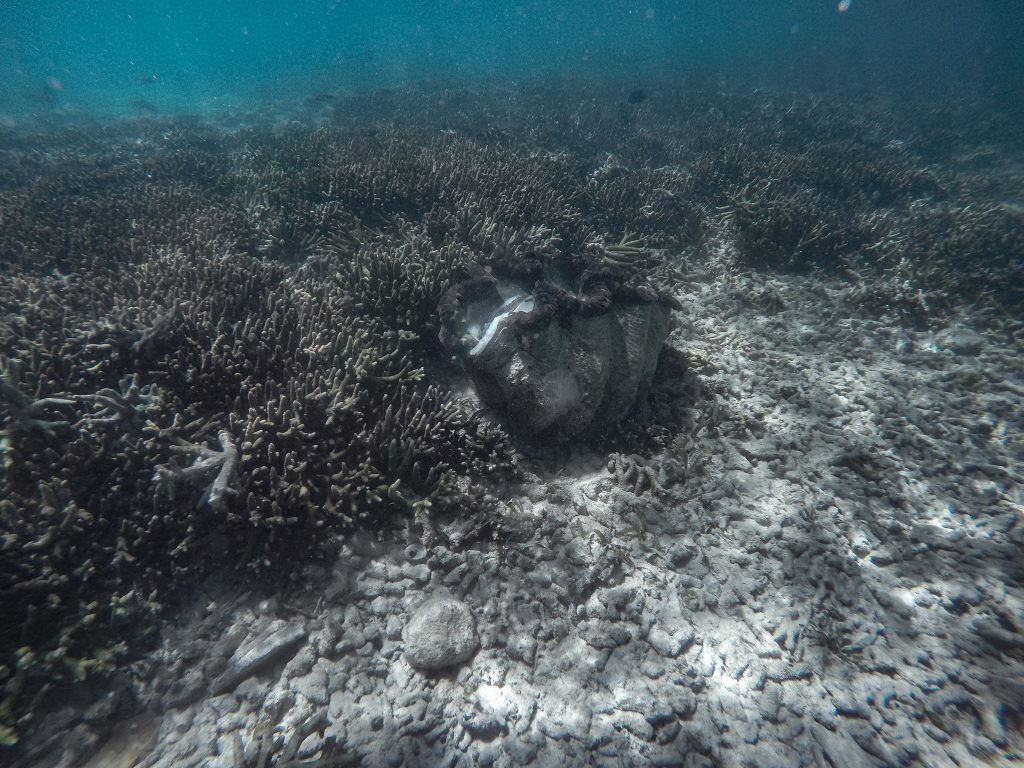 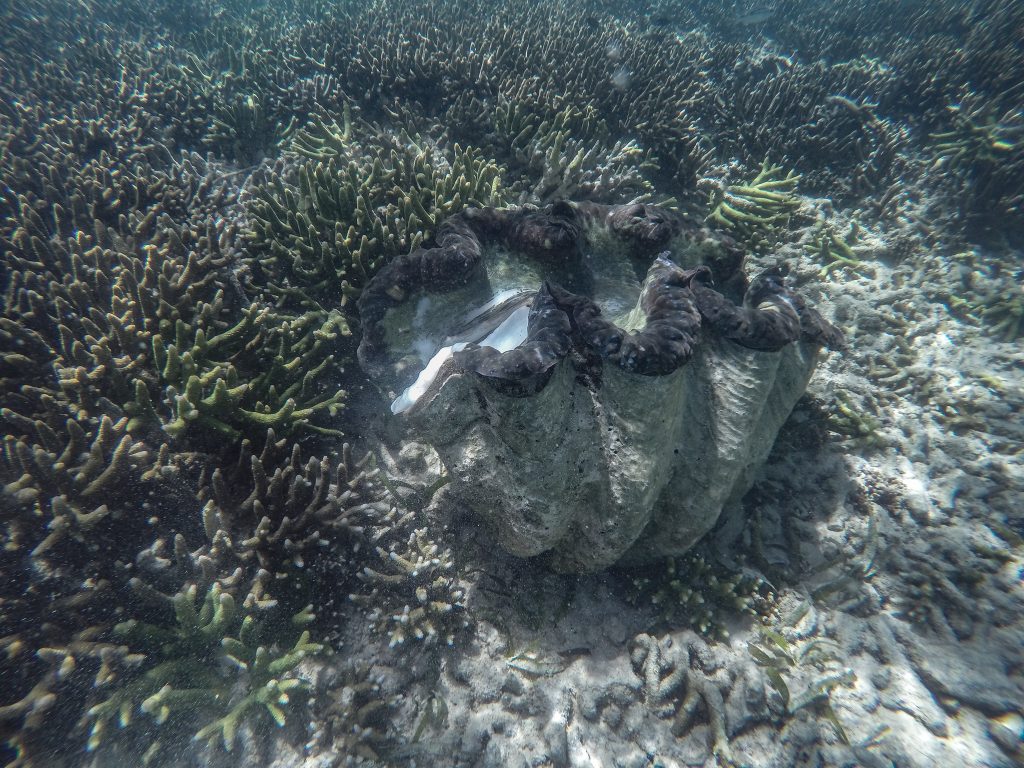 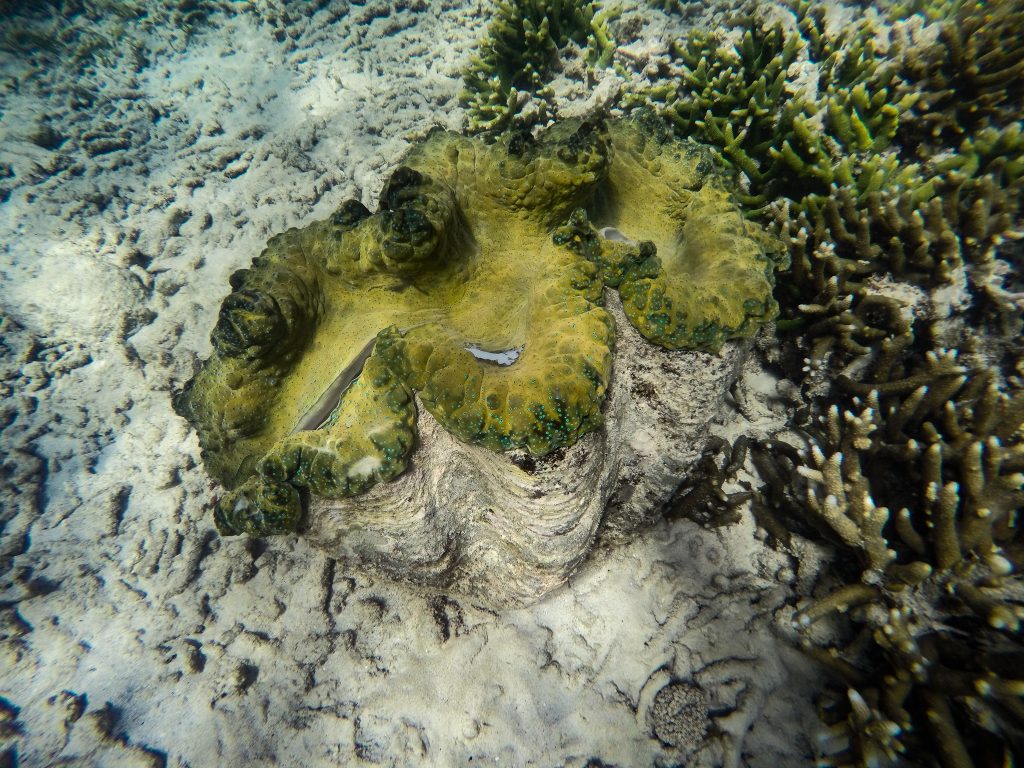 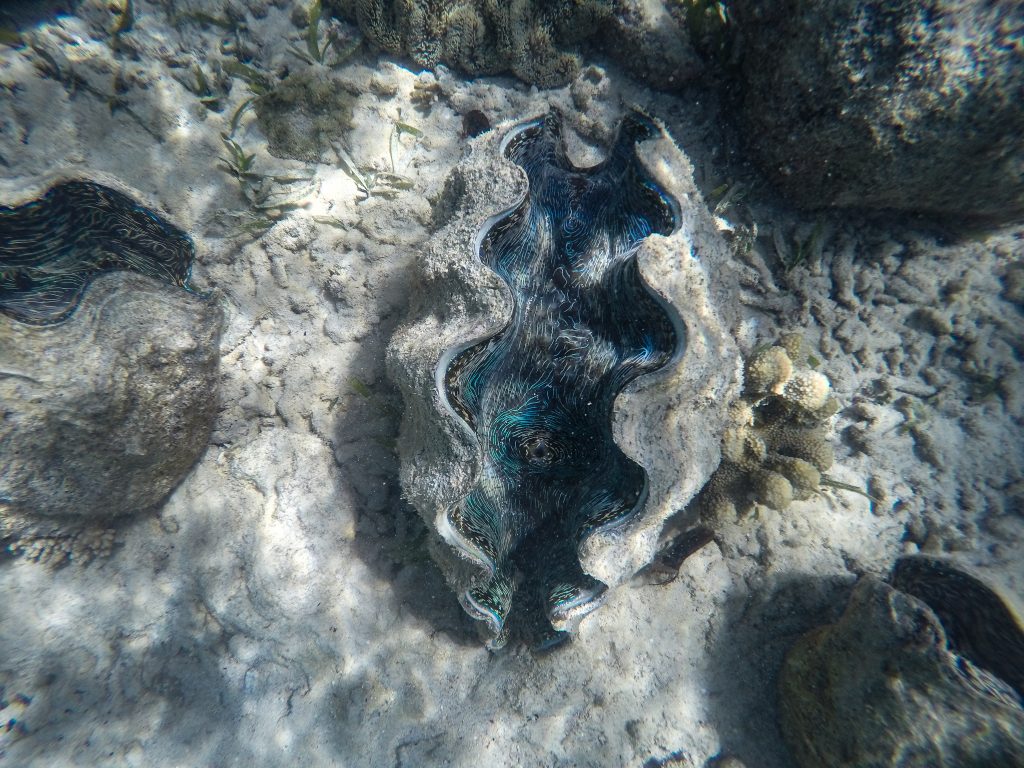 Into the Deep Water

My guide led me further out into the deeper water, where the coral was denser and there was more marine life. Here the Giant Clams were even larger, some growing to four feet in length after years of feeding on the ocean floor. They were at depths of up to 10 metres in this water and there was row after row in neatly organised lines as they had been placed by the sanctuary staff.

These beautiful and unique creatures are listed as vulnerable across the world. Their numbers in the wild are ever dwindling because in some cultures their meat is considered a delicacy and overharvesting has led to a sharp decline in their natural numbers.

The Giant Clam Sanctuary on Camiguin is helping to expand their numbers, but still in a very artificial environment, while numbers plummet in their natural habitats. They educate visitors like myself on these beautiful creatures, creatures that I had never before had the pleasure of seeing anywhere, even in an aquarium, and creatures that I was utterly ignorant of except through vague legends or in passing reference.

I returned to the white sand beach having accomplished what I’d stayed on the island to do. I had snorkelled with hundreds of Giant Clams, an experience like no other I’d been apart of before, and I knew more about these gentle giants than I’d ever thought possible. 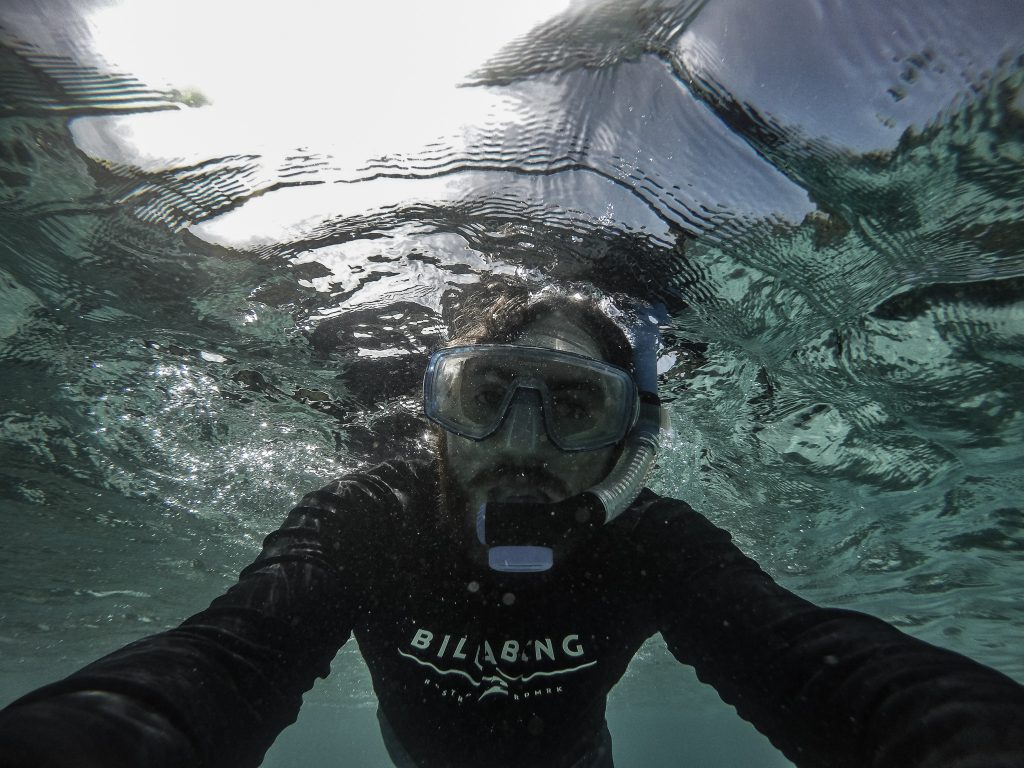 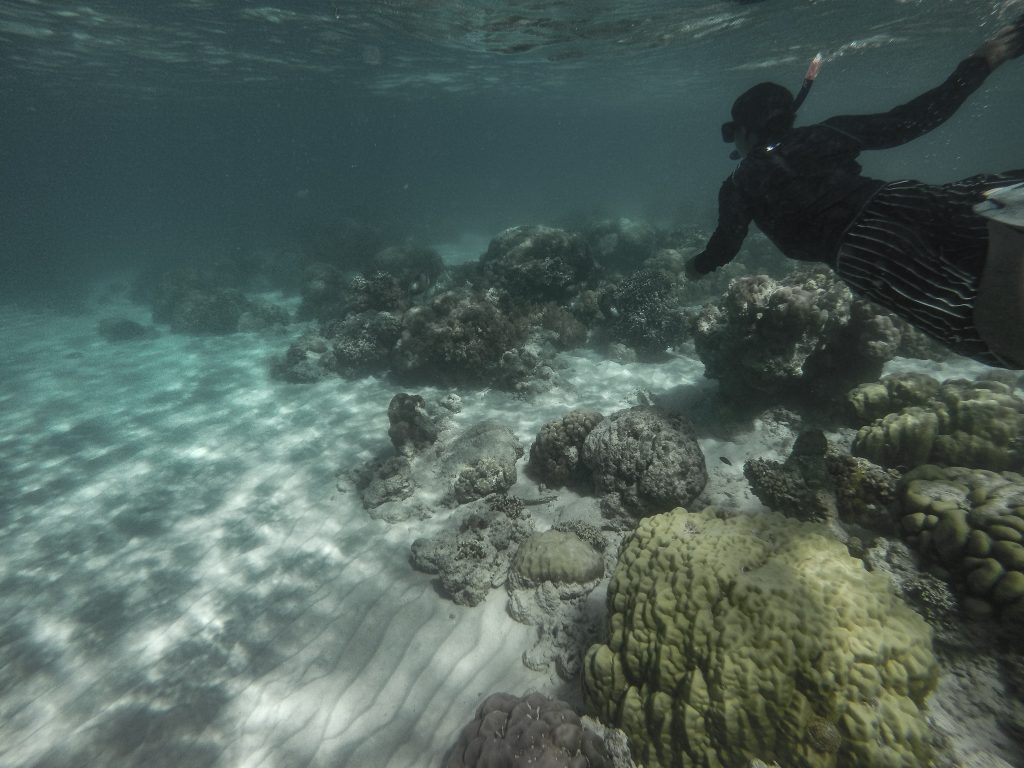 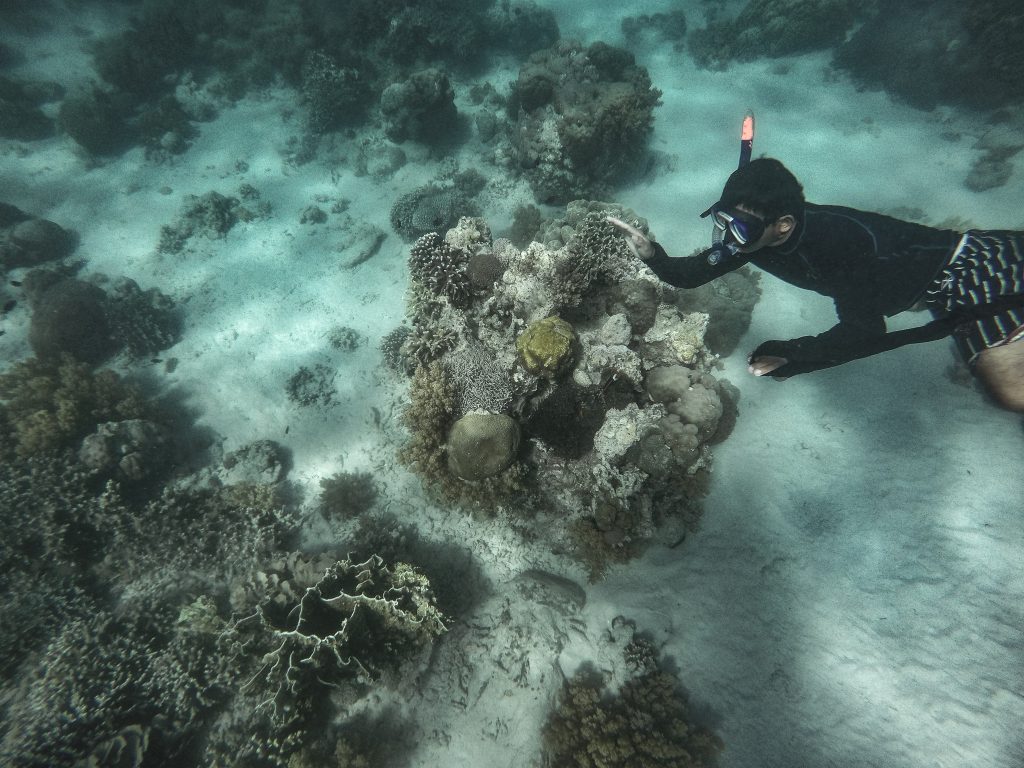 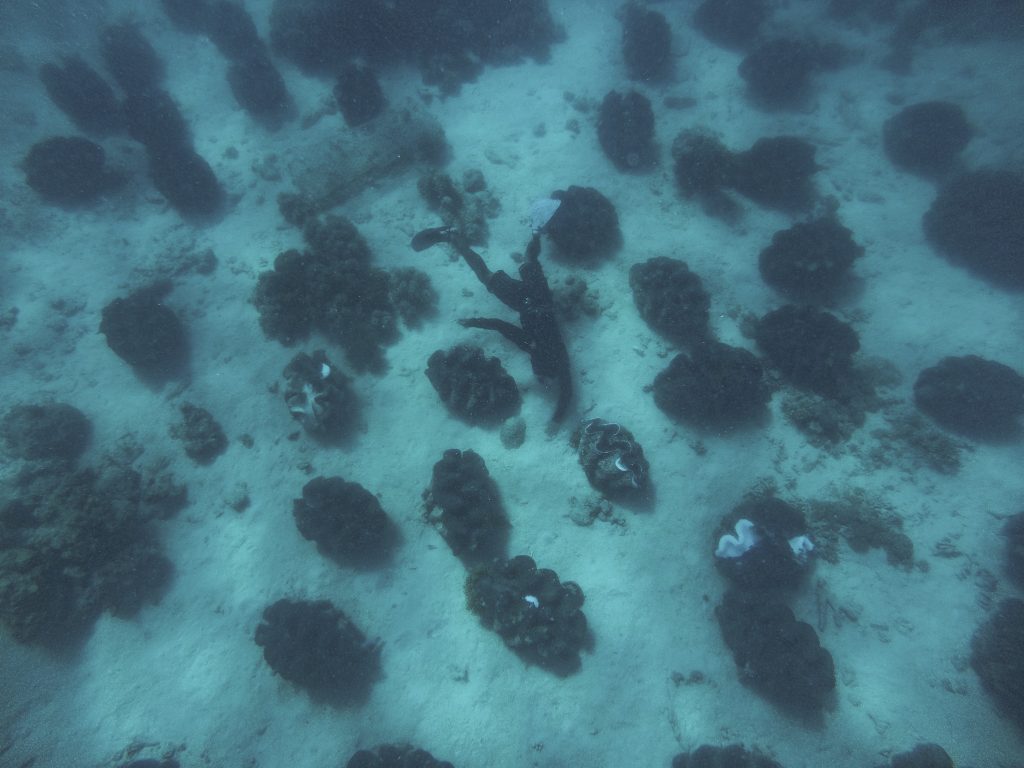 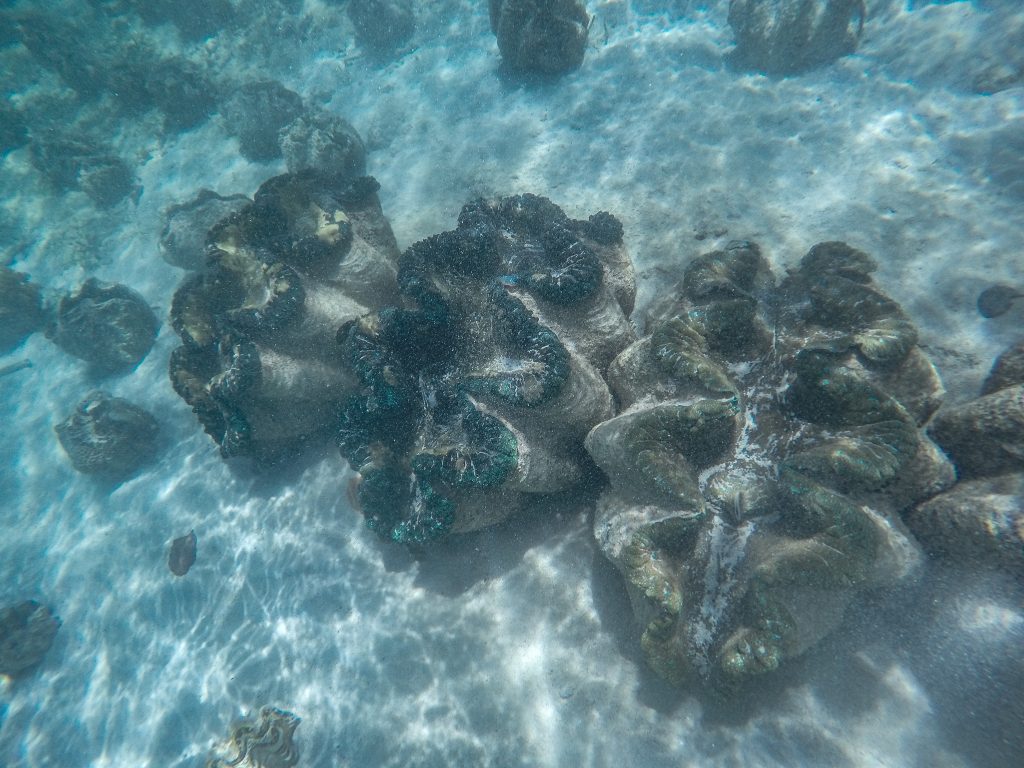 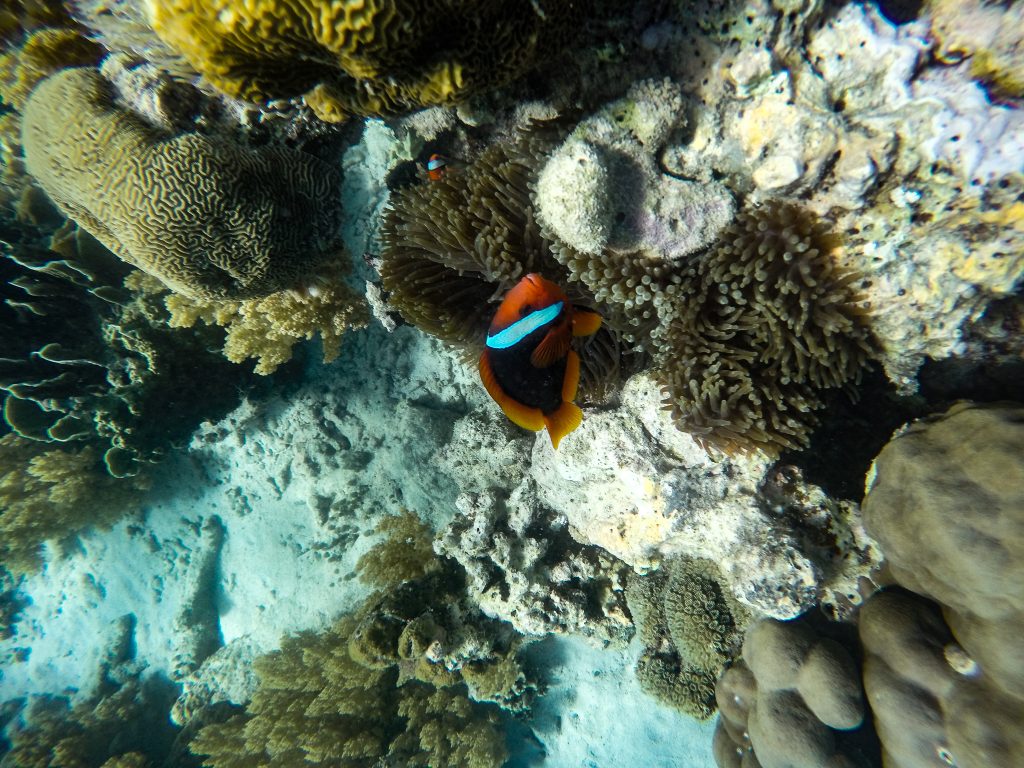 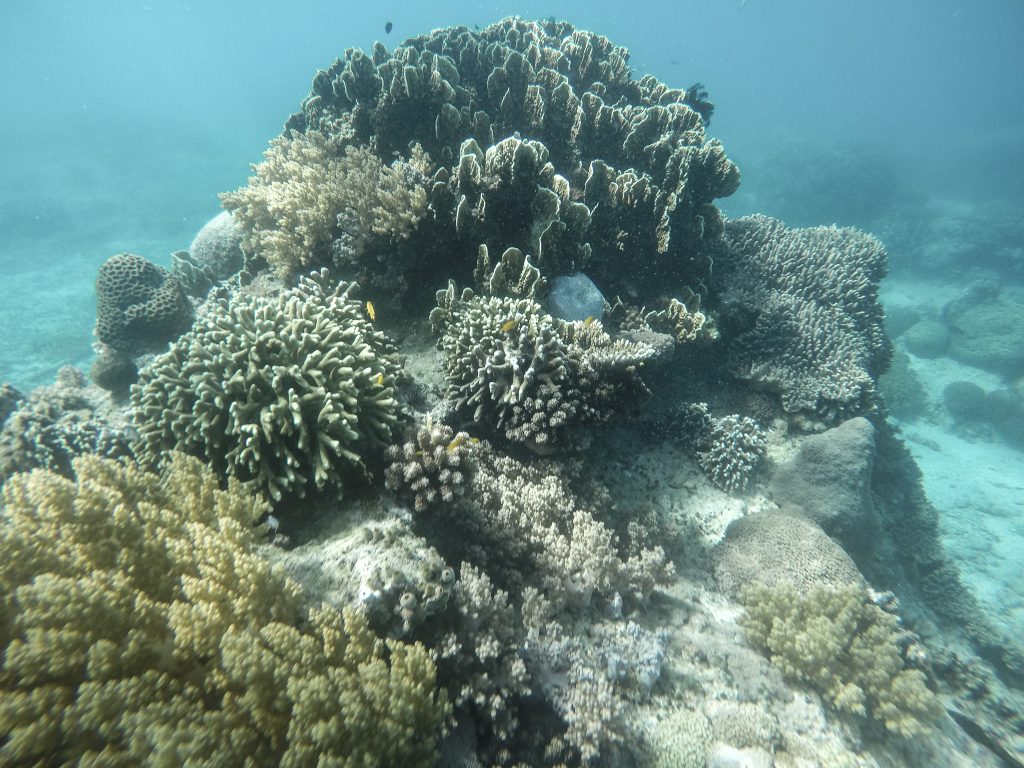 The Giant Clam Sanctuary is located on Kibila White Beach in the southern part of Camiguin Island, in Northern Mindanao. The sanctuary is found in the small village of Cantaan, and to travel here is easy from anywhere else on the island, but does require access to your own transport. It’s not far from the port of Benoni, where ferries connect to Mindanao, and it’s around an hour away from the popular Mambajo region in the north, near White Island. I hired a motorcycle to travel here, but I met other tourists who had hired drivers or minibuses if they were part of a group, as there is no easy way to get here by public Jeepney.

How much does it cost to visit the Giant Clam Sanctuary?

The Giant Clam Sanctuary is a privately owned cooperative run by the local people of Cantaan, on Camiguin Island. They charge an entrance and conservation fee of 50 PHP per person which includes a short tour of the facilities by the local kids and guides. If you want to experience the Giant Clams in the open ocean then you need to pay extra as a guide is required to escort snorkellers around the sanctuary. The price list for this and for gear hire can be found below (see picture).

I rented a motorcycle from my hotel to travel here and paid 500 PHP for a full day’s rental, as well as petrol costs. There’s a small restaurant serving food and drinks at the sanctuary too, so you may want to bring some cash for lunch as well! 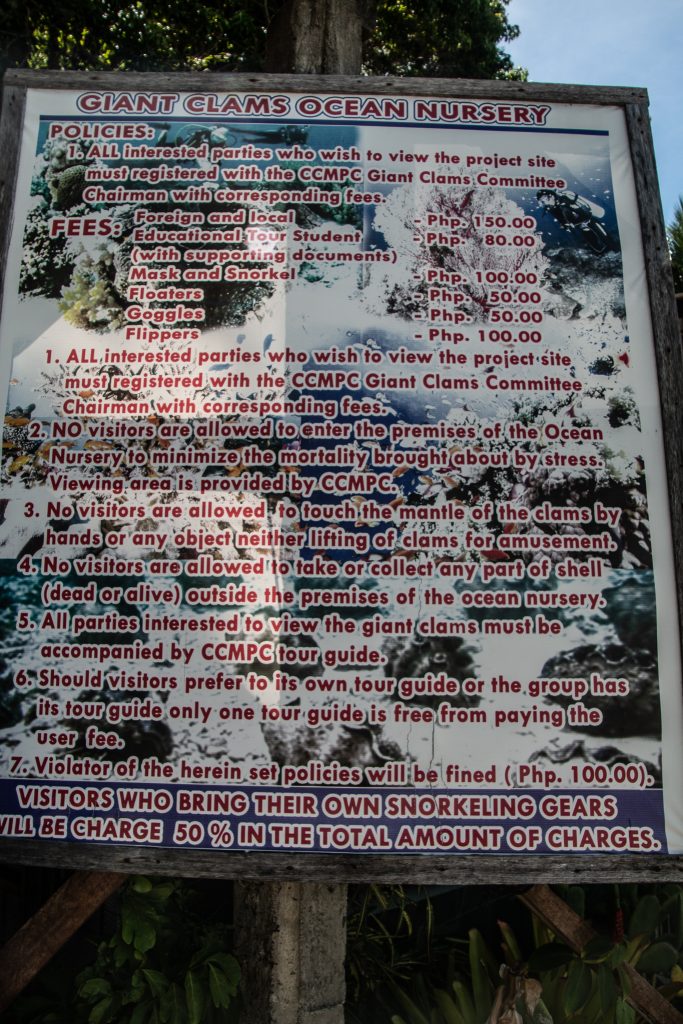 Disclaimer I was hosted by Medano Island Resort as part of a complimentary 3 night stay on Camiguin Island, and they suggested I visit the Giant Clam Sanctuary. Thank you for the excellent recommendation, however, all my opinions are my own, as always!