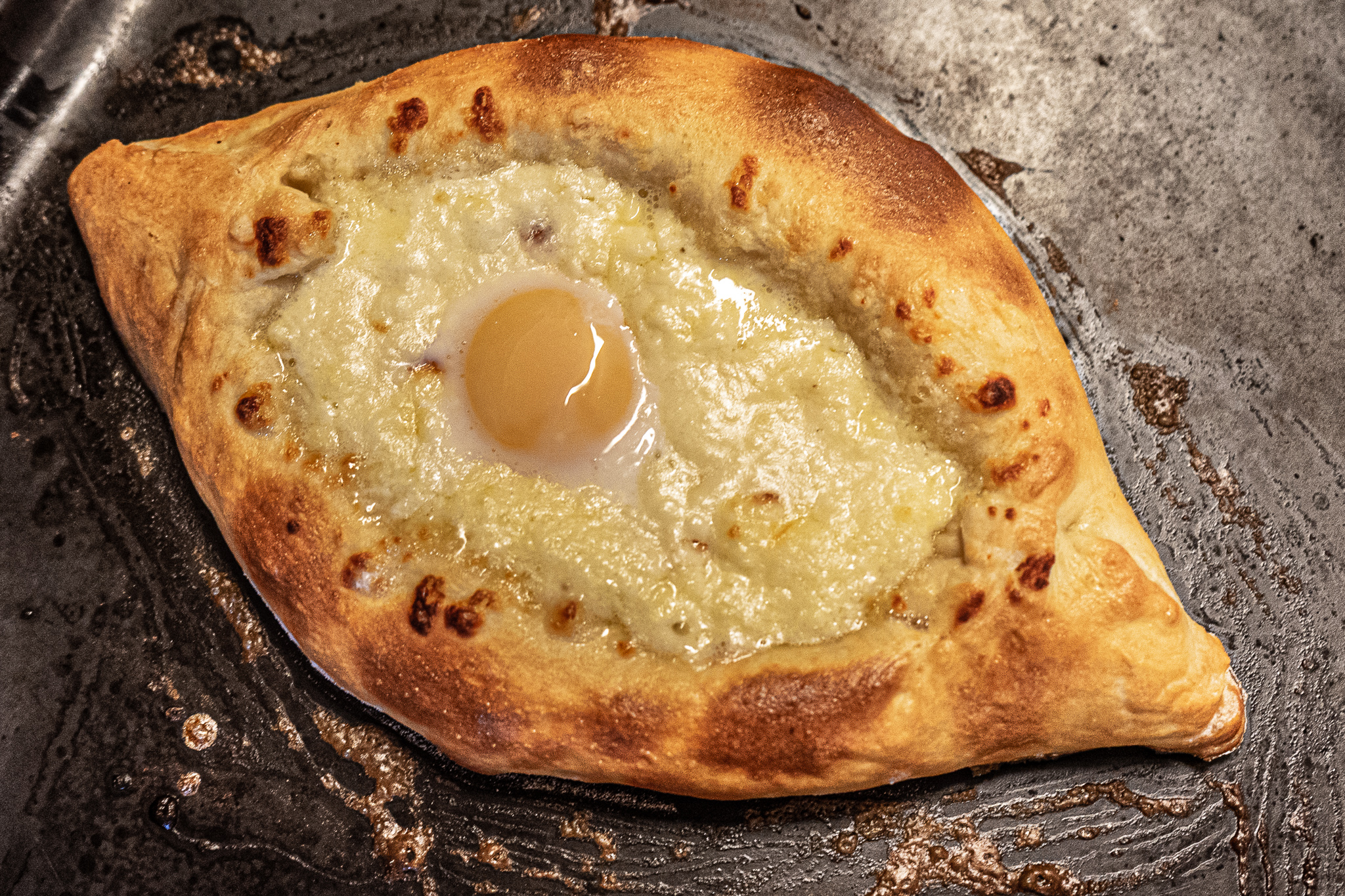 In Georgia, there are over 50 different types of Khachapuri, but there’s one type of Khachapuri that’s more renowned than any other that’s baked in the country.

This is Acharuli Khachapuri, a dish which to tourists is more commonly known as the Georgian Cheese Boat. This fine example of Georgian cuisine is the heartiest meal you might taste in the country, but it’s also a heart attack waiting to happen.

Shape dough into a boat shape, stuff it with several different types of cheese, crack an egg in the middle and serve with an artery-clogging quantity of butter, and more cheese.

It’s Georgia’s most recognisable cuisine, and in Tbilisi, I was given a culinary masterclass to craft my own Acharuli Khachapuri with local chefs at Chakandrila Georgian Cooking Classes.

Georgia is a country that’s famed for its cuisine. Despite having a population of just over 3 million inhabitants, and being just a small mark on the world map sandwiched between Russia and Turkey in the Caucasus, this is a land where hundreds of dishes have been refined over centuries of culinary practice.

In fact, Khachapuri – translated literally into English as Cheese Bread – is so fundamental to Georgian culture and society that Tbilisi University uses Khachapuri pricing as a measure of economic inflation across the country – similar to the more well known Big Mac Index which was invented by the Economist.

Khachapuri is variously described as Georgian pizza, Georgian cheese bread, or even as Georgian pie, such is the diversity that’s waiting to be eaten here. Khachapuri comes in myriad shapes and sizes, with myriad fillings ranging from cheese to beans.

While most visitors are likely to only sample the classic Khachapuri, such as Imeretian Khachapuri it’s usually the unique shape, look and cheesy taste of the Acharuli Khachapuri that captures the imagination of the culinary tourist.

Acharuli Khachapuri is unlike most bread-based dishes known to the rest of the world. It’s shaped like a boat and it’s stuffed with cheese, egg and butter, and anyone who has ever drunk too much Georgian wine will know that eating a monster-sized Acharuli Khachapuri is the quickest way to sober up after midnight.

This particularly iconic version of Khachapuri originates from the Black Sea region of Georgia, from an area known as Adjara. This is where you’ll find Georgia’s second city, Batumi, but Acharuli Khachapuri has long since spread far across the country – and indeed, across the world – from its humble home town.

Acharuli has many different transliterations, and you might see it written down on menus or in shop windows as Adjaruli Khachapuri, Adjarian Khachapuri, or as simple as the Georgian Cheese Boat.

Compared to other Khachapuri styles, Acharuli differs significantly in that it’s open, with the distinctive, hollowed-out boat-shape providing the perfect vessel for what is an extreme amount of cheese, butter and egg.

For anyone who’s not vegan, and who’s not afraid of diabetes, it’s a winning combination.

Down a small side street in Mtatsminda, in the heart of Tbilisi, I was shown by local chef the art of making an Acharuli Khachapuri.

Gia Kalatozishvili has been baking Acharuli Khachapuri for decades, and in the restaurant and kitchen of Chakandrila, he began to demonstrate the process behind it.

Arrayed on the table were the simple set of ingredients needed for an Adjarian Khachapuri. On a small plate was a large, round ball of dough, ready to be rolled out swiftly into the boat shape that Acharuli is known for. Next to this, was a glass containing egg yolks, a bowl of flour, and two bowls of different cheeses.

This was all that Gia would be using to make the Acharuli, and with the dough already prepared, it wouldn’t take him long to fashion the legendary Cheese Boat from the small number of ingredients ahead of him.

Imeruli is cheese from the Imereti region of Georgia. This is perhaps the most well-known cheese in Georgia, and you’ll find any table, be it breakfast, lunch or dinner. It’s produced from cow’s milk and is known for its salty-sour taste, which for western cheese pallets can at first be overwhelming.

Sulguni is a type of cheese produced from cow’s milk that originated in the Samegrelo region of Georgia. Its elasticity and texture ensure that it’s often referred to as Georgian Mozzarella – because, like most foods in Georgia, it can’t simply be referred to by foreigners as what it is, which is Sulguni.

Sulguni is indeed very mozzarella-like, or in my opinion, a cross between mozzarella and halloumi. Like all Georgian cheeses, it’s overtly salty.

Both kinds of cheese are grated, and Gia makes sure that the Acharuli Khachapuri is over-loaded with both Imeruli and Sulguni, to the point where it seems almost dangerous to eat the thing.

After rolling the ball of dough out flat, Gia starts by placing Imeruli around the edge. He then rolls the dough over, to form a cheese-stuffed crust that’s bursting with Imeruli. This is when the boat shape begins to take place, and after rolling both cheesy crusts over, he crimps the end and ensures that his Khachapuri is ready to sail.

He pastes the egg yolk over the dough, and then in the centre of the boat, he places an extraordinary quantity of Sulguni, before then layering over another large quantity of Imeruli.

Satisfied that things are just about cheesy enough in the boat, Gia takes his Khachapuri into the kitchen at Chakandrila, where he’s already preheated his oven to the correct temperature for baking.

He places the Khachapuri on a baking tray, and then kicks back with some Georgian wine for the ten minutes it takes to cook.

When those ten minutes are up, he takes the Acharuli out of the oven and prepares a solitary egg, which he expertly places in the centre of the boat. He puts the Khachapuri, with added egg, back into the oven for just one more minute, before quickly removing it, and sliding the completed product onto a plate.

How to Eat Acharuli Khachapuri

Know it’s time to eat the Khachapuri, in all its heart-attack-inducing glory, but not before Gia places a large knob of butter into the centre of the boat.

Gia demonstrates the correct process behind the consumption of Acharuli Khachapuri, I quickly realise that the knife and fork are mostly there just for show. Gia does use the knife, but it’s to stir the egg, cheese and butter into a gooey mess in the middle of the Khachapuri.

He puts the knife down, but tears off a large chunk of cheese-stuffed crust from the end of the Acharuli, where it’s at its thickest. Stirring the cheese-egg-butter centre further, he uses the cheesy crust to scoop up the Khachapuri filling.

It’s a heavy dose of cheese, egg and butter, and a heavy, yet hearty dish to eat at lunchtime, and I know that by Georgian standards, this is just a small Khachapuri too, meant just for one person.

With a smile on his face, Gia devours the Khachapuri, one piece of crust at a time, and when he’s finished, he insists that I start helping him to prepare some more.

Chakandrila is one of the best culinary schools in Georgia because it’s a locally owned business run by Georgians who’ve spent their whole lives cooking.

This is home-style food at its best, and if you are looking for a place to learn a few recipes, be it Khinkali or Megrellian Kharcho, then I can’t recommend Chakandrilla enough, because the level of cheesy goodness you’ll experience baking an Acharuli Khachapuri is absolutely extraordinary…

Chakandrila Georgian Cooking Classes provided my cooking class free of charge, but as always, my opinions are always my own!

Travelling to Georgia? Sign up for Air BnB to book your accommodation using this link HERE and you’ll get £25 free credit towards your first booking!