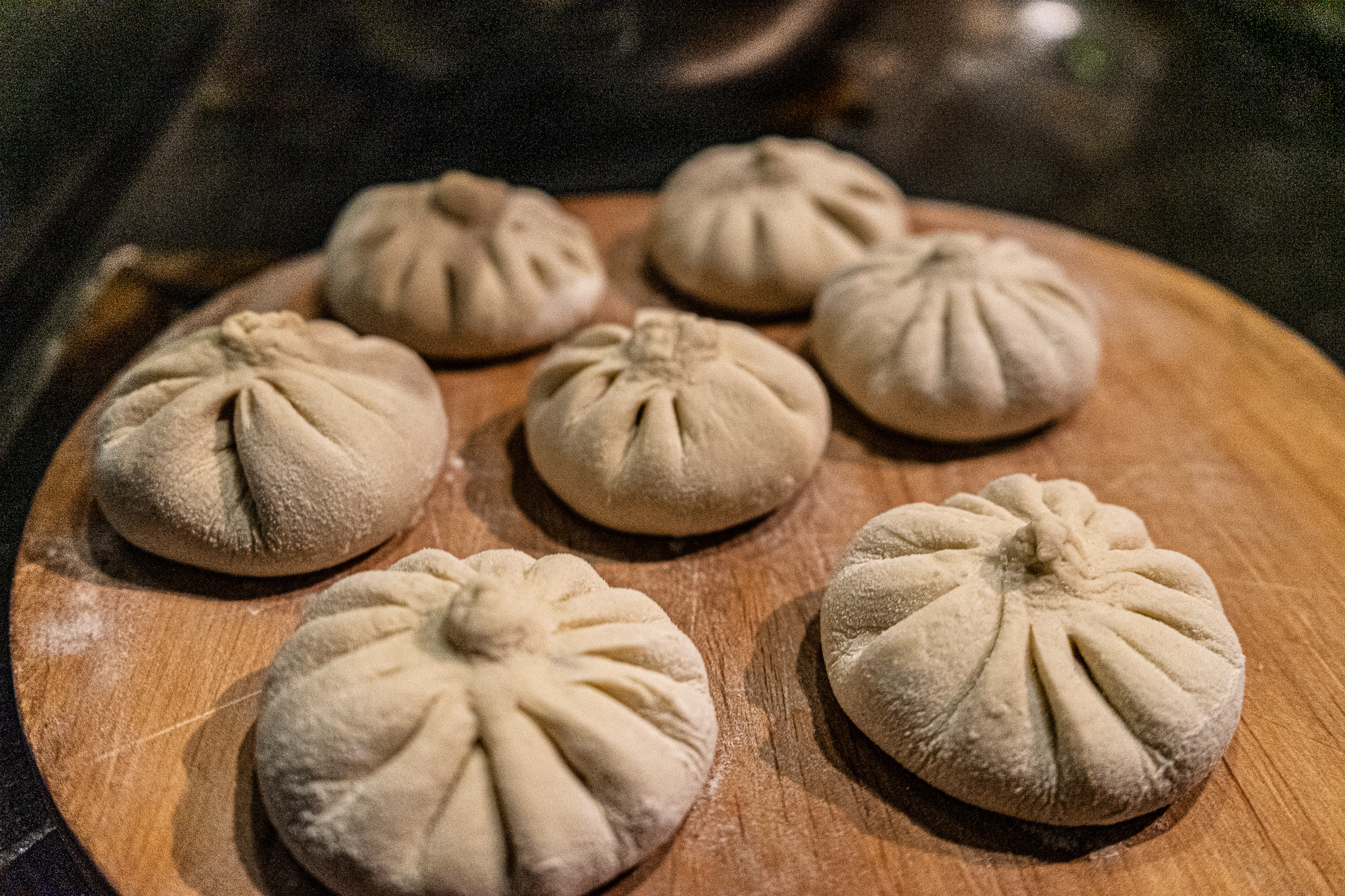 Khinkali is perhaps the most ubiquitous food item that you’ll find on a Georgian menu, a simple concoction of ground meat and spices, cheese or potatoes, which is packaged up in parcels of dough to create the famous Georgian dumplings.

Khinkali has a long history in Georgia, and these juicy dumplings are usually the first thing a traveller tries when they first arrive in the country. Khinkali originated in the mountains, but the dish has spread across the country, and Khinkali making has been refined to an art in the capital, Tbilisi.

Many restaurants claim to offer the best Khinkali in Tbilisi, but khinkali has an abundance of fillings and cooking techniques, and no one establishment can ever truly claim to the ‘the best’.

At Sioni 13, in Tbilisi’s Old Town, I found some of the best khinkali I’ve tried so far in the capital, and I was also shown just how these delicious parcels of juicy joy are made by Georgian chefs in the kitchens.

Sat at a table in the dimly lit back room of the restaurant, Manana Patashuri is preparing to craft an order of khinkali. Her rolling pin is ready, and the table is covered in flour.

She confidently grabs chunky circles of dough, placing them in front of her, before smoothly rolling them flat. Her Khinkali making skills were learnt in her home village in the mountains, and for decades she’s been handcrafting dumplings and perfecting khinkali recipes until her skills led her to work in the capital.

Now she lovingly prepares khinkali every day in Tbilisi, and she continues rolling the dough into flat, circular pieces until there’s a sizeable pile ready on the table.

While Manana is rolling the dough, her colleague and fellow chef Iza Kokaia is preparing the fillings.

Right now, they are making a traditional khinkali recipe, which consists of a mixture of ground pork and beef meat, seasoned with plentiful quantities of what they simply call Georgian Spices. The spice mixture includes the likes of pepper, chilli, coriander and many other herbs.

This is just one method of khinkali making, and across Tbilisi and across the rest of the country, you can find many other fillings on offer. Meats, including pork, beef, lamb or a mixture of the three are the most popular, but for vegetarians, you can commonly find the likes of cheese or potato fillings.

Iza brings the meaty mixture out to the table, where Manana begins spooning it into the waiting circles of dough.

Once she’s satisfied with the quantities in each, she begins the expert process of parcelling up the ingredients into the iconic khinkali shape.

Manana takes great pride as she works the dough nimbly with her hands, her years of experience showing as she quickly turns out a perfectly shaped khinkali.

She folds the edge of the dough over to create a sort of layered, lattice effect around the edge. Then she pulls the dough together to meet at the top and to completely encase the pork and beef filling inside. It’s important that the khinkali is airtight because it’s the juice that forms inside that’s the best part of the dish.

This gives the khinkali its dumpling-like shape, but to finish it off and to hold the whole package together, Manana then has to crimp the top together. This holds everything in place, but also creates a convenient handle by which to actually hold the khinkali, a handle which comes in handy when it’s time to eat.

Once the Khinkali has been prepared, Manana places them onto a wooden board, which Iza then takes through to the restaurant’s kitchen.

With other Georgian delicacies sizzling in pans or stewing in large pots, Iza brings up a large saucepan full of water, which she heats until it’s boiling nicely on the stove.

She stirs the water until it’s swirling, then she carefully places each of the khinkali into the saucepan. She adds more water intermittently, and after 7 minutes, she’s inspecting each khinkali to see if they are thoroughly cooked.

When she’s satisfied, she places the khinkali on a plate. Now it’s time to eat them.

Khinkali is one of Georgia’s national dishes, and being such an important part of the culinary culture, there’s a fierce etiquette employed when it comes to eating them. In fact, that etiquette begins when you order khinkali in a restaurant.

While khinkali are often listed on menus individually, with a price per individual khinkali – in Tbilisi, this ranges from 0.40 Lari at a standard eatery up to no more than 1 Lari per khinkali at incredibly fancy establishments – restaurants usually impose a minimum order of at least 5 khinkali per table.

From Georgians, I’ve been told that it’s impolite to even consider ordering less than 5, and I’ve seen tourists frowned upon when they attempt to order just one or two from the menu, with genuine confusion or offence being taken by the serving staff.

The first rule of eating Khinkali in Georgia: order at least 5. Minimum. In restaurants, you’ll often see local tables stacked with khinkali, and it’s not uncommon to see khinkali eating competitions going down in public or at an infamous Supra feast, as competitive Georgians attempt to out-eat each other. The more you order, and the more you eat, the better it is when it comes to Khinkali.

The second rule is that khinkali should only be eaten using the hands. This is the most important rule of them all because the best part of the khinkali is the juice that forms inside while it’s cooking in the pot. Cutting open the khinkali with a knife, will only ensure that all that delicious juicy goodness is lost on the plate. Just to confuse matters though, even if you ONLY order khinkali, and no other sides or dishes, you’ll probably be given a knife and fork anyway. Don’t touch them, and just go straight in with your hands.

You take the khinkali by the conveniently placed handle at the top, and as you bite into it, you slurp the juice down as quickly as you can. I’ve also been told that it’s bad luck to lose even just a drop of juice. I’ve also heard stories that eating the handle, was once considered to be a sign of poverty, but these days, I don’t think anyone judges if you devour the entirety of the khinkali.

Khinkali eating is almost a skill in itself, and when it’s important to learn the local etiquette when ordering a plate of these delicious Georgian dumplings.

1. Roll out the dough

2. Cut the dough into circular pieces

4. Place the pork and beef mince onto the round, flat dough

5. Crimp and fold the edges of the dough to create the dumpling shape

6. Pinch the top of the dough to create a ‘Khinkali handle’

7. Boil a saucepan full of water

8. Stir the water and place the Khinkali in

Sioni 13 is located on Sioni Street, in the Old Town. You can find it just opposite the Caravanserai, by the Zion Cathedral. Their Khinkali is fantastic, although there’s fierce competition in Tbilisi for ‘the best’ Khinkali.

If you’re eating in the restaurant at a quiet time of the day, you can actually ask to see the khinkali being prepared, and they’ll even give you the chance to roll your own.

All Words and Photos by Richard Collet

Travelling to Tbilisi, Georgia? Sign up for Air BnB to book your accommodation using this link HERE and you’ll get £25 free credit towards your first booking!