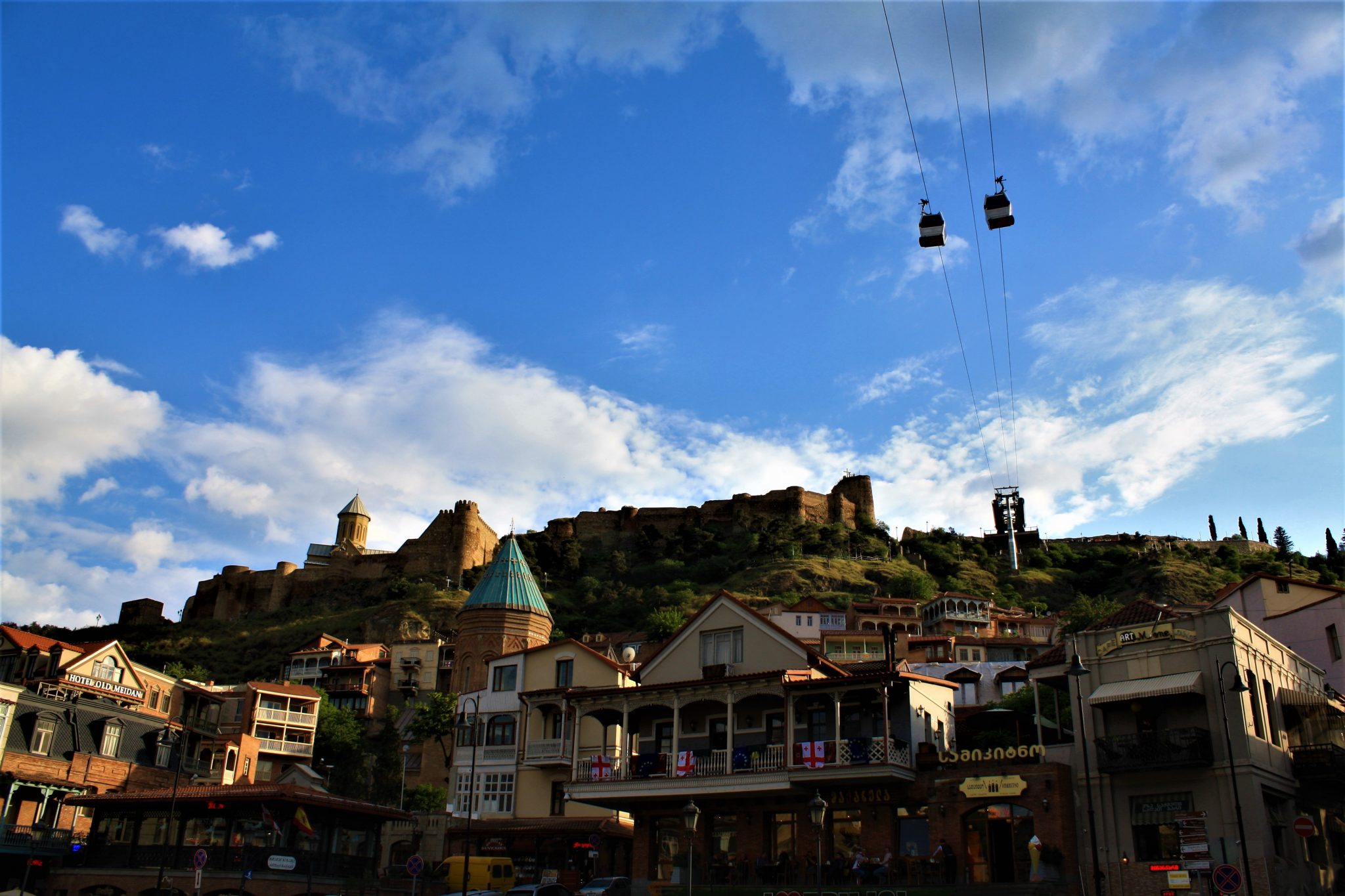 Travel Tramp’s Top Things To Do In Tbilisi!

Don’t leave home without Travel Tramp’s guide to the Top Thing’s To Do In Tbilisi, the capital of Georgia! From copious quantities of wine and heart attack inducing food, to cascading waterfalls in the city centre and centuries old sulphur bath houses, get off the beaten track and explore the Georgian capital!

Tbilisi is a rare city, it’s a place I visited reservedly with no prior expectations and left with  sorrowful goodbye tears. I’d planned to stay for a few days but fell so hard for Tbilisi that I stayed for two months. 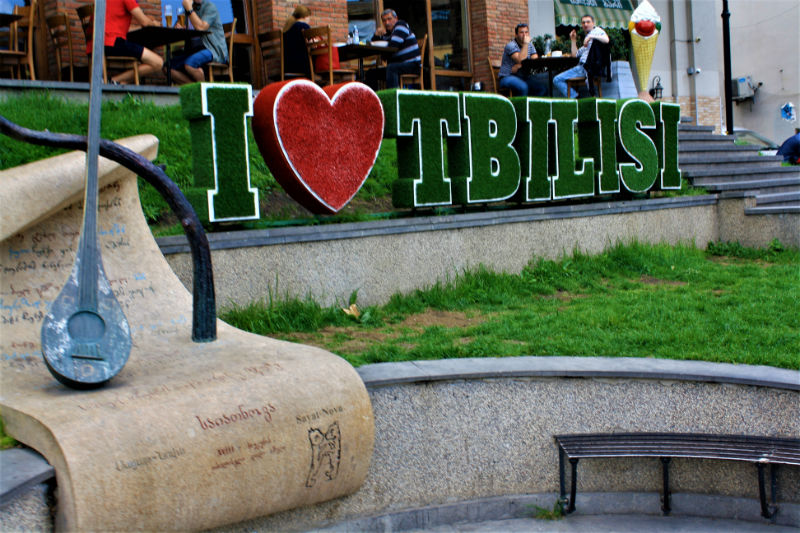 That’s because Tbilisi has it all. It’s been at the crossroads of East and West for centuries, and in its old streets you can find a collision of cultures preserved in a unique and truly Georgian manner. It’s a city like no other.  It’s also a city on the rise, it’s safe, it’s friendly, it’s modern and it’s historic.

There’s a lot to see in the city, so here’s my list of the Top Things To Do In Tbilisi, but the real charm lies not in the sights and museums but in the cuisine, the culture and the people of this fine city, who will welcome you with too much good food and too much good wine! 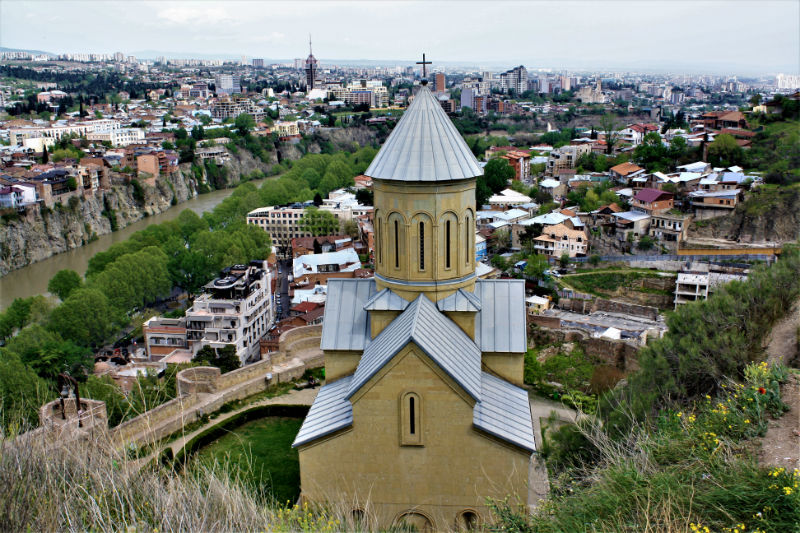 The first place to start any tour of Tbilisi is in the Old City. Before you drink too much wine and eat too much Georgian cuisine it’s time to hit the streets, exploring the old back alleys and historic sights of the capital, with its fusion of Russian, Persian, Armenian, Stalinist and modern architecture which collides to create the distinct Georgian blend. Walk past centuries old ruined fortresses, patrol the old city walls, and admire the ramshackle, colourful houses of Tbilisi. This is the heart of the city, and while the modern suburbs have sprawled away from it, it’s a place that’s somehow managed to retain its old charm. 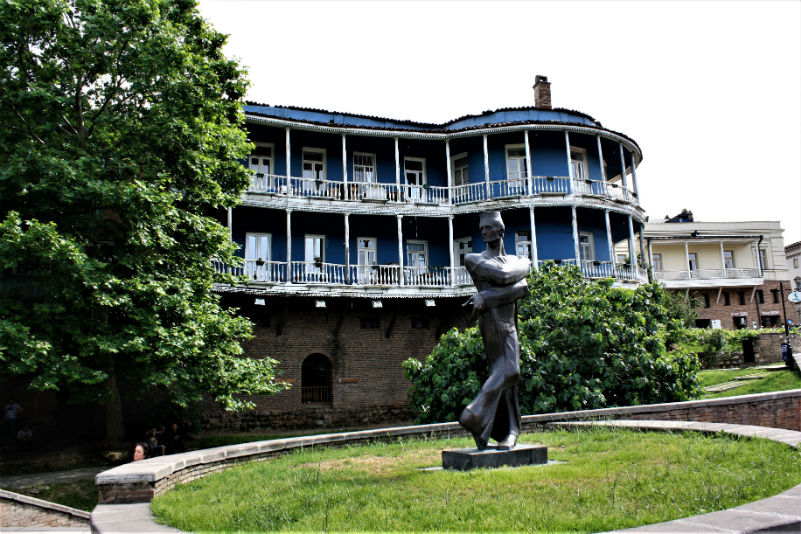 This jumbled up, yet delightfully intriguing Clock Tower sums up the quirky, endearing nature of Tbilisi to its core. It’s in the Old Town, but isn’t quite that old. Next to the Gabriadze Theatre, the clock was designed by Rezo Gabriadze, a puppeteer who built the nearby theatre and directs puppet plays of a heart wrenching nature – itself a culture performance that should be seen if tickets can be secured. 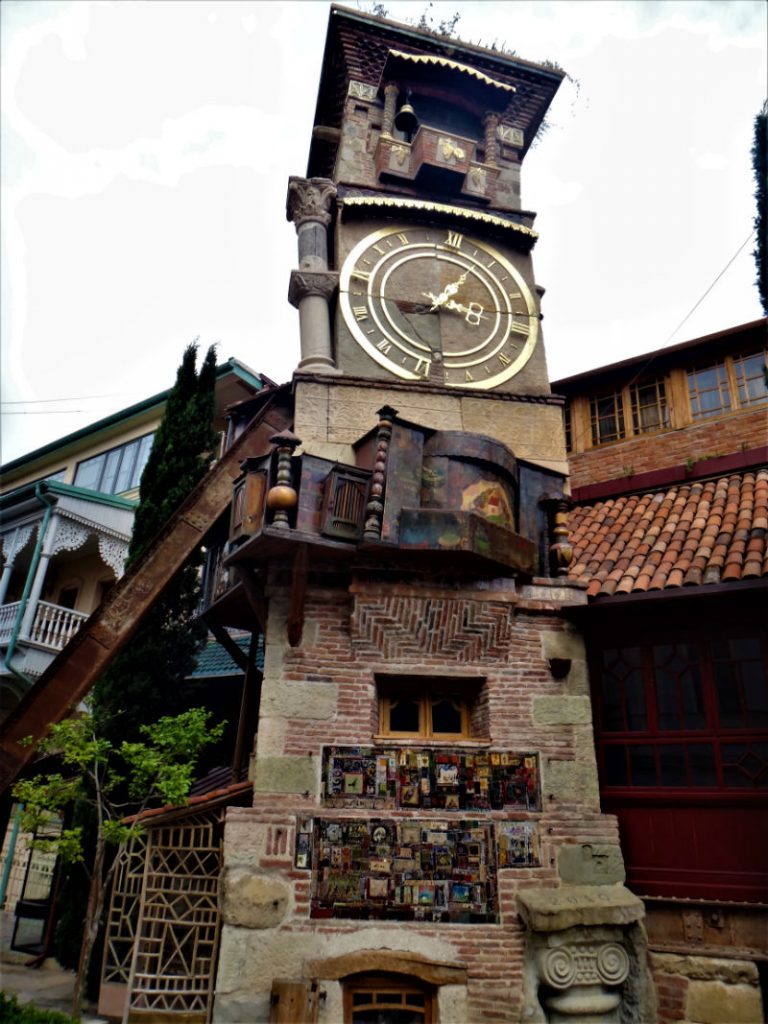 This is the main street of the city, the site of government buildings, museums, theatres, cinemas and shops. The long avenue starts at Independence Square near the Old City and ends over a kilometre later. There’s street artists, performers, book sellers, food vendors, while it’s also the the site of exhibitions, demonstrations and celebrations. 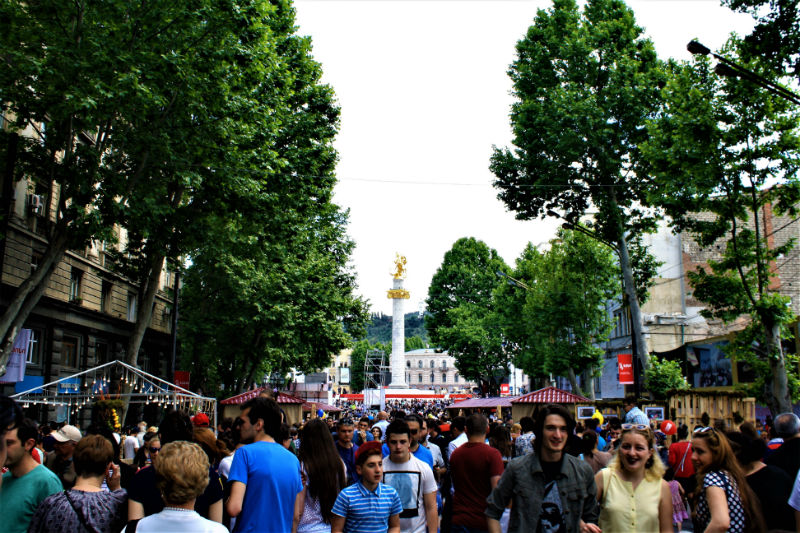 This Soviet era monument stands next to the 4th Century Narikala fortress atop a steep hill overlooking the city, and can be seen from all across Tbilisi. This epic statue is Mother Georgia. All major Soviet Republics had similar statues in their capitals, but while most of the other statues tend to go for swords and shields, Tbilisi’s Mother Georgia carries a sword and a flagon of wine. 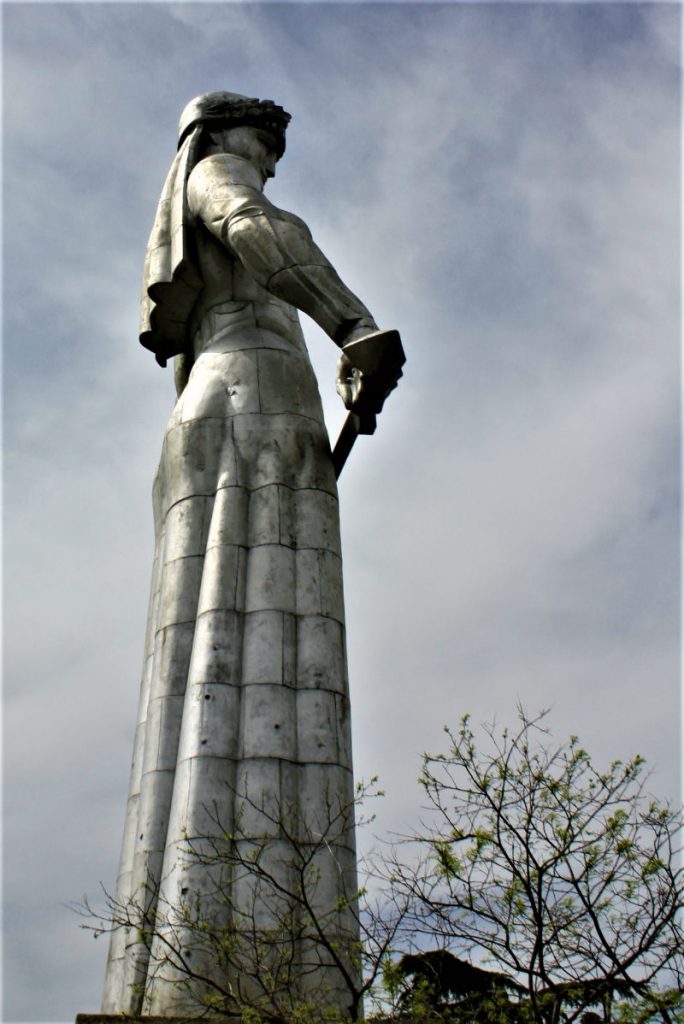 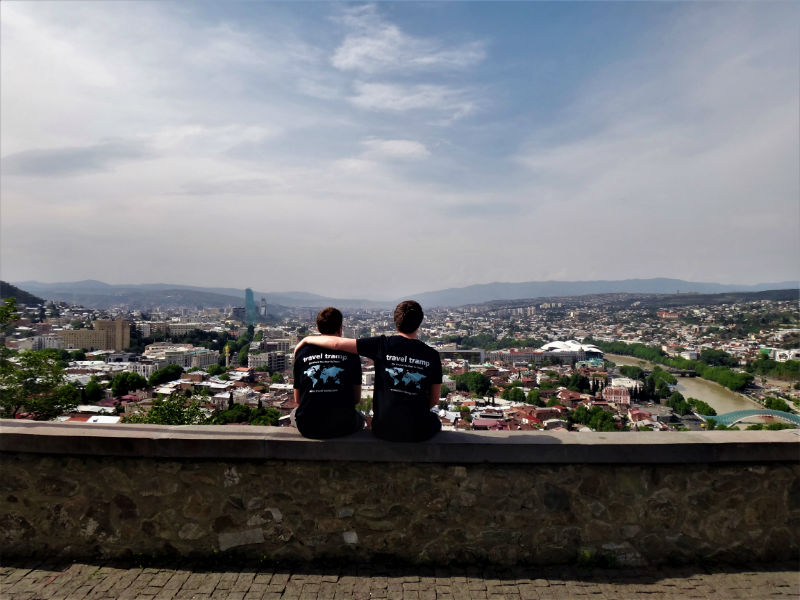 View Of Tbilisi From Mother Georgia

Tbilisi might be a large capital city- an urban jungle in places- but it’s one of the greenest cities I’ve ever visited. There are parks seemingly everywhere, lakes on the outskirts, and waterfalls in the city centre. 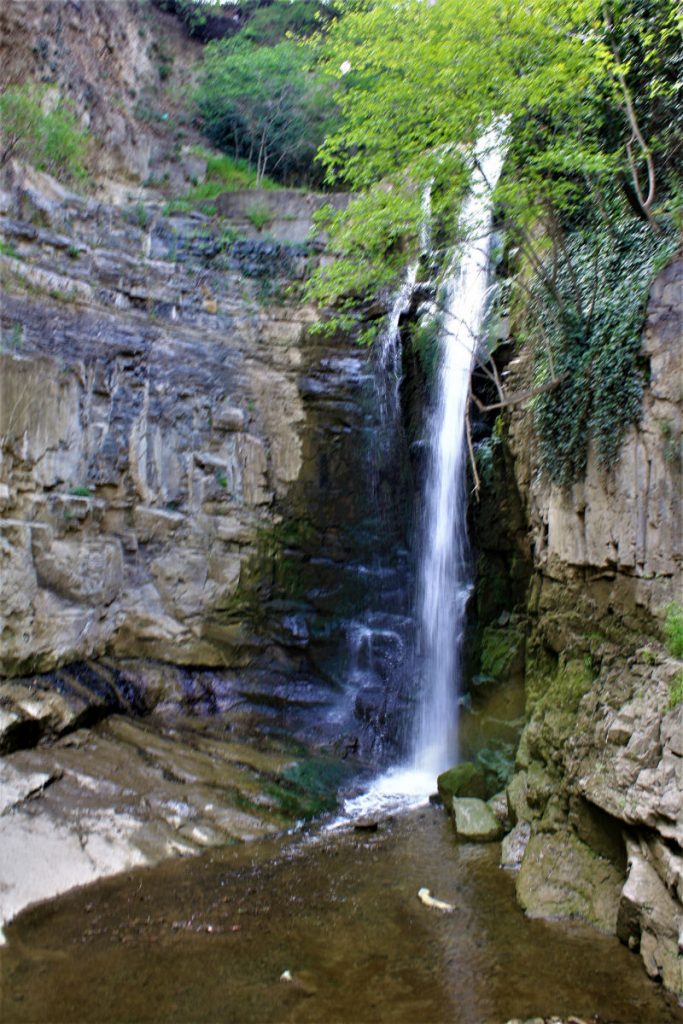 By the old fortress a waterfall drops from the ridge top into a small gorge below. The smell of sulphur is strong, as the city was founded here centuries ago on the spot where an ancient Georgian King discovered the hot water rising from the ground. Now the sulphur is used to feed the numerous bath houses which you can find just down the hill from the waterfall. 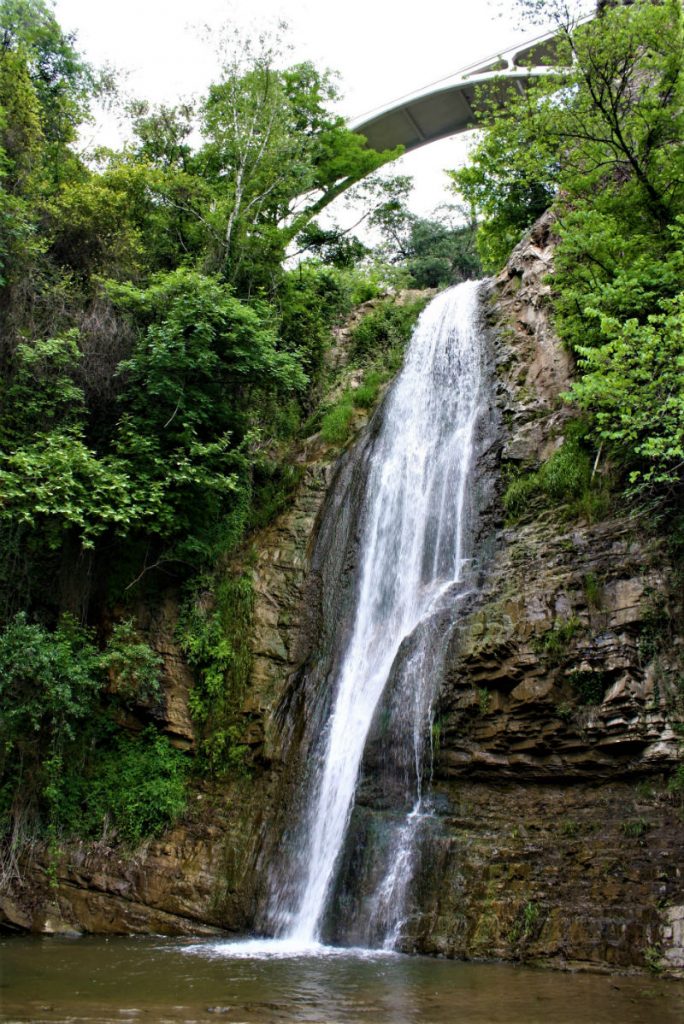 In the nearby Botanical Gardens, an even taller waterfall cascades down from a great height into the gardens. Both waterfalls are great places to retreat to on a hot Tbilisi summer’s day.

Go For A Swim In Turtle Lake

If the waterfalls got you in the mood for a refreshing swim and you’re in Tbilisi during their notoriously sticky and humid summer season, then don’t fear, near Vake Park on the other side of the city, is Turtle Lake. I never actually saw any turtles, but it’s an appealing name. 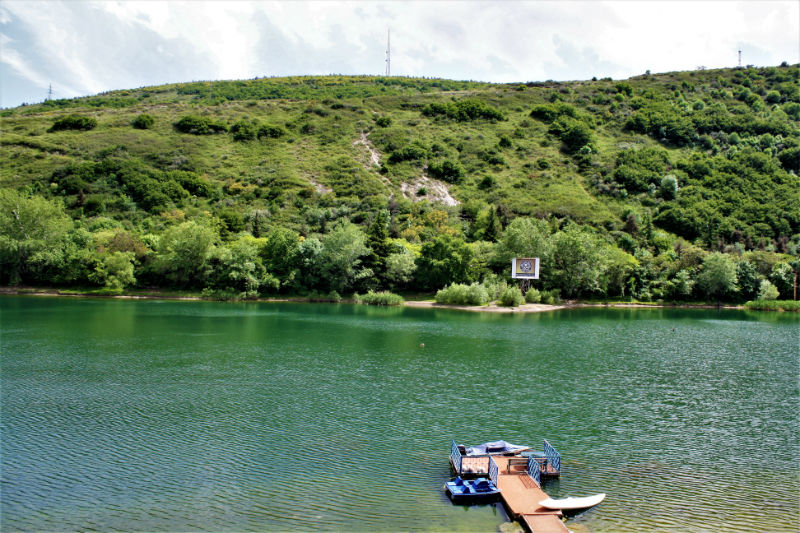 It’s a great spot to visit in summer to relax around the water’s edge, to visit one of the lake side cafes, have a beer or go for a swim. If you’re walking it’s a steep route to the lake, as it sits atop a mammoth sized hill, but there’s some epic hikes up and down if you’re feeling energetic, with panoramic views of Tbilisi to reward your efforts. 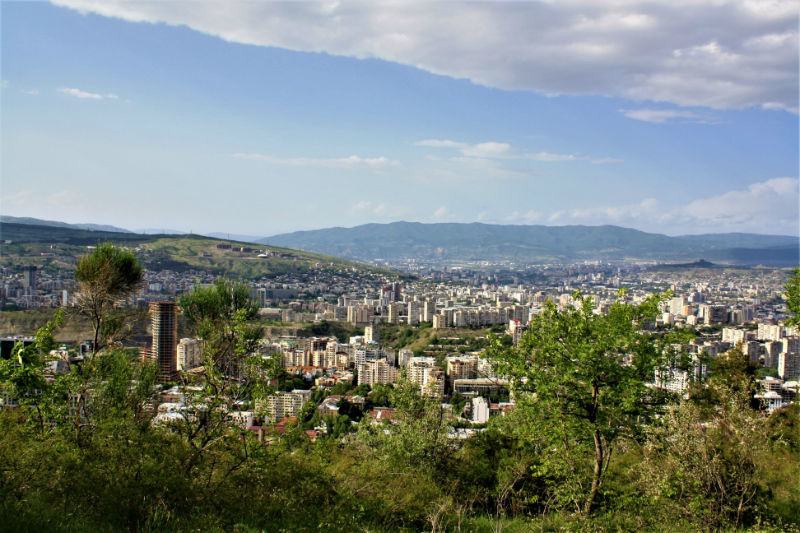 Georgian wine is a thing of beauty. Georgians have been making wine- and good wine at that- for centuries, and it’s an integral part of the culture and history of the country. It’s cheap, it’s delicious and it’s excellent quality. Any bar or restaurant in Tbilisi will serve up a good bottle or two of the local stuff, and wine lovers will find it hard not to be impressed.

Wine connoisseurs can venture further afield to the estates and wineries that surround Tbilisi. Towns like Telavi in the Khaketi Region aren’t that far from the city, and are famous for the quality of their wine. 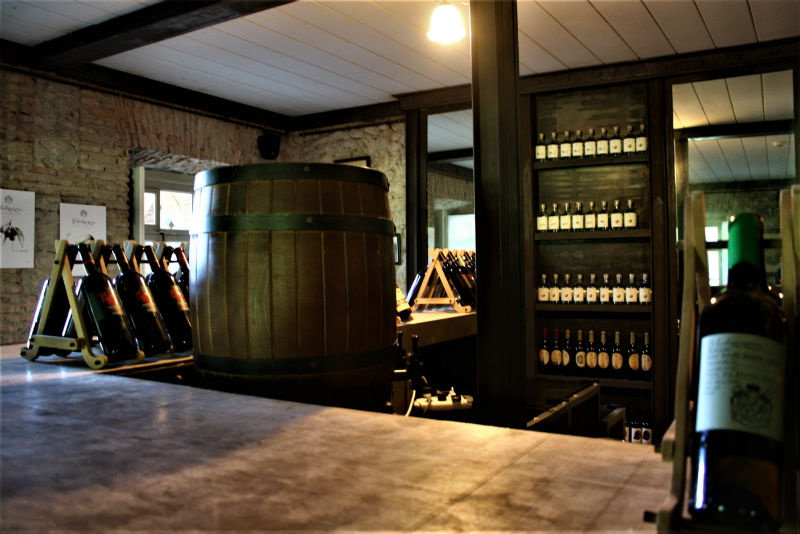 If you need to sober up a bit after all that wine then head to a local eatery and order a plate full of Khinkali. And I mean a full plate, not a few Khinkali, but mounds of Khinkali. It’s a real test of Georgianess to see how many of these delicious meat filled dumplings you can eat without dying. Be warned though, there’s an art to eating Khinkali. Hold the dumpling by the top, and bite into the bottom. This allows you to slurp up all the juice you can. Don‘t even think about using a knife and fork, you’ll just spill all that delicious Khinkali juice all over the place. 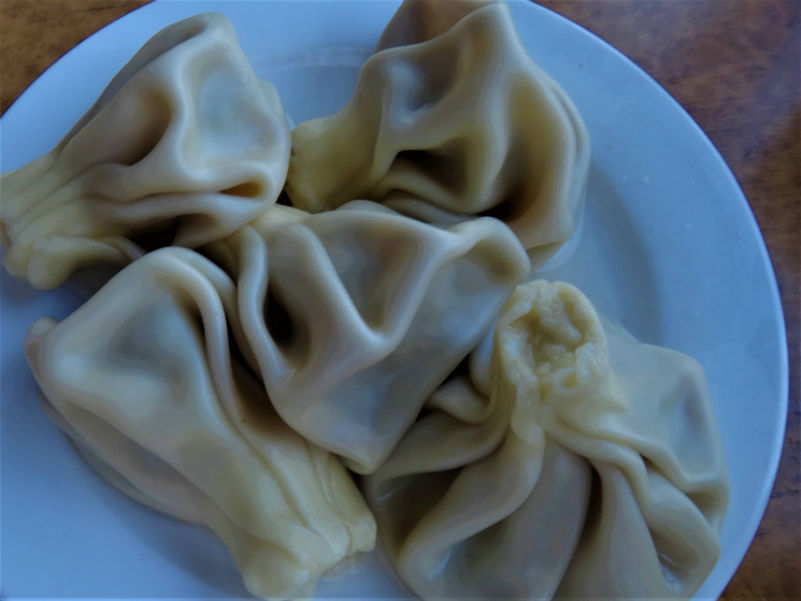 If the Khinkali dumplings didn’t quite cut it and you’re still feeling worse for wear after all that wine, then try a heart attack… It’s not actually called that of course, but it may as well be. Khachapuri is a traditional, bread based Georgian dish. Well, it’s more of a death inducing meal than a dish, and it’s also scarily delicious, but that‘s probably just all the calories and wine talking. The Georgians take big slab of dough, hollow out the middle, cover it in cheese, add a few eggs and then top it off with a few slabs of butter. Tear off a chunk of bread, mix it all up in the middle, and then eat until you pass out or sober up, whichever comes first. 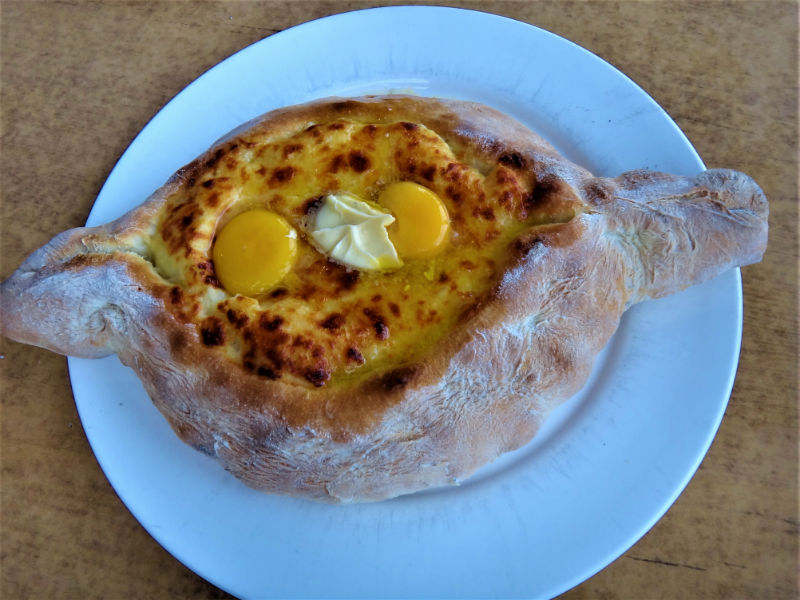 Take A Bath to sober up

If you’re still feeling worse for wear after gorging on Georgian cuisine and drinking far too much then the perfect cure for any hangovers are the sulphur baths. There a few to choose from, and the baths date back centuries in some cases. You can either go public- and get naked with the locals- or splash out and get a private bathing room to yourself. The water comes from the famous sulphur springs beneath the city, and are part of the legend upon which Tbilisi was founded. You can even crack open a beer too if you‘re feeling up for it, then just sit back and let the water wash away the grease and booze… 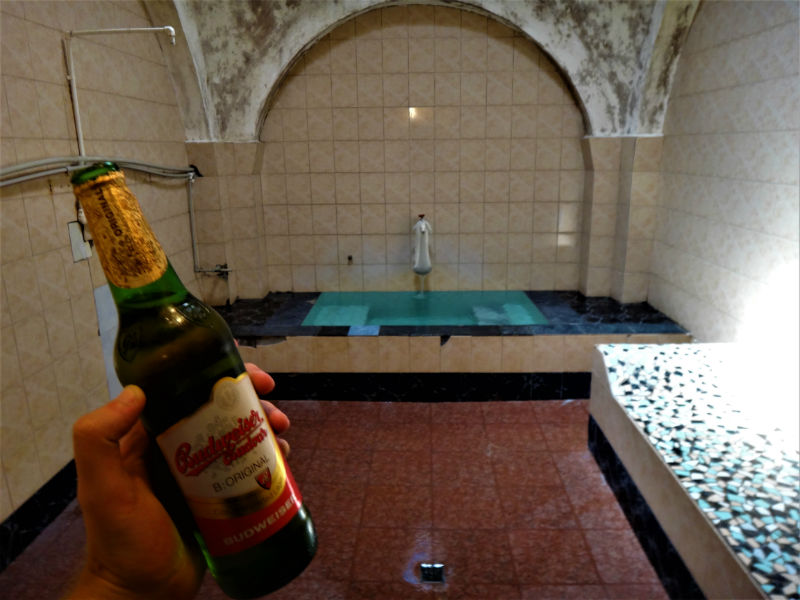 Escape The City In Mtskheta

If city life gets the better of you then a quick Marshrutka ride away from Tbilisi is the small city of Mtskheta. This is Georgia’s Holy City, an important place for Christianity and for Christians in the country. Old churches aside, it’s also a beautiful little city, on the banks of a wide river, surrounded by wineries and green hills. It’s a great place to escape the city and to get out into the open. 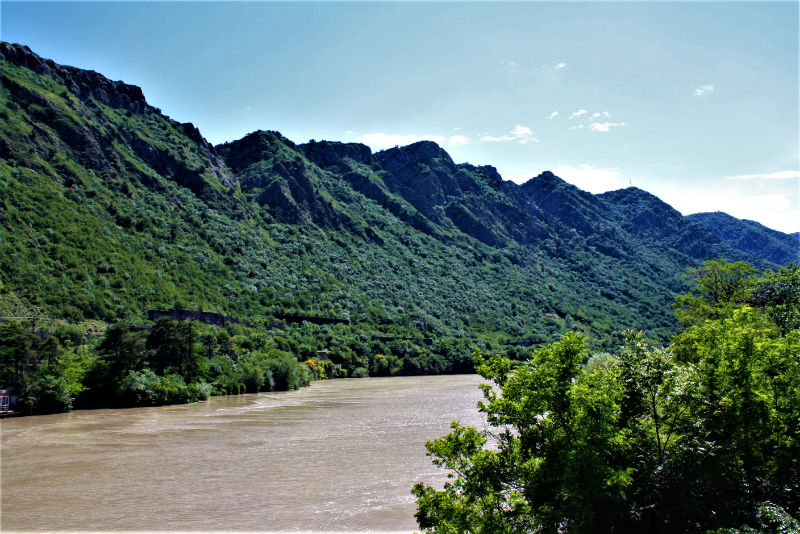 That’s right, the infamous Soviet leader Joseph Stalin was actually Georgian. He grew up in the town of Gori, which can be reached on a day trip from Tbilisi. Until recently, a huge statue of Stalin even stood in the centre of Gori, but it was quietly removed by Georgian authorities trying to distance themselves from one of histories most divisive characters, under the protests of many residents who warmly see the dictator as their town’s most famous son.

A Smaller Statue OF The Man Himself, Mr Stalin

The giant statue may be gone, but there are still streets named Stalin. You can visit the house where he supposedly grew up- which has eerily been almost enshrined- and there’s a vast museum dedicated to his life, although mysteriously lacking many details of his more brutal exploits and habits. 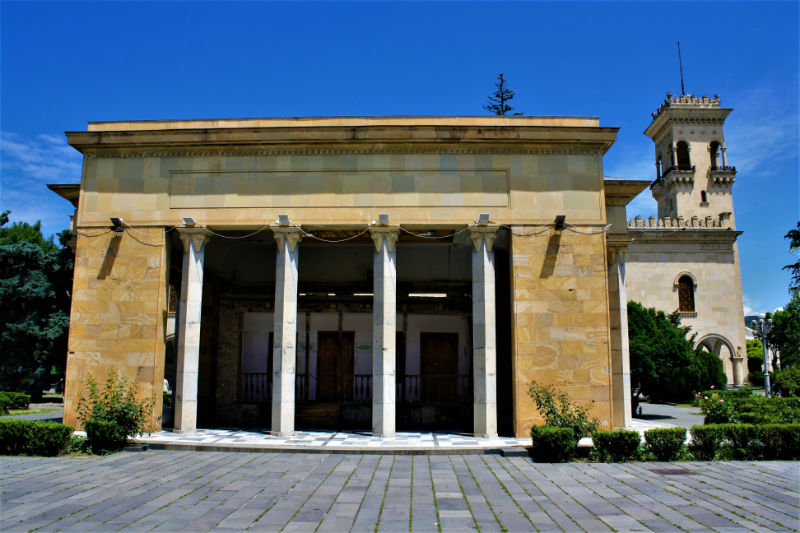 The Museum Of The Soviet Occupation

Back in Tbilisi you can visit the Georgian National Museum, where you will find the story of the other side of Stalin’s not so glorious rule in The Museum of the Soviet Occupation, on Rustavelli Avenue. The days of the USSR are increasingly being portrayed as a long occupation by the government in Georgia, and in the museum you can find harrowing stories of war and secret police during the country’s many years of communist rule. It’s a real insight into the trials and tribulations that formed the modern Georgian character and the city of Tbilisi.

A Culinary Walk Through The Backstreets of Tbilisi