A Culinary Walk Through The Backstreets of Tbilisi 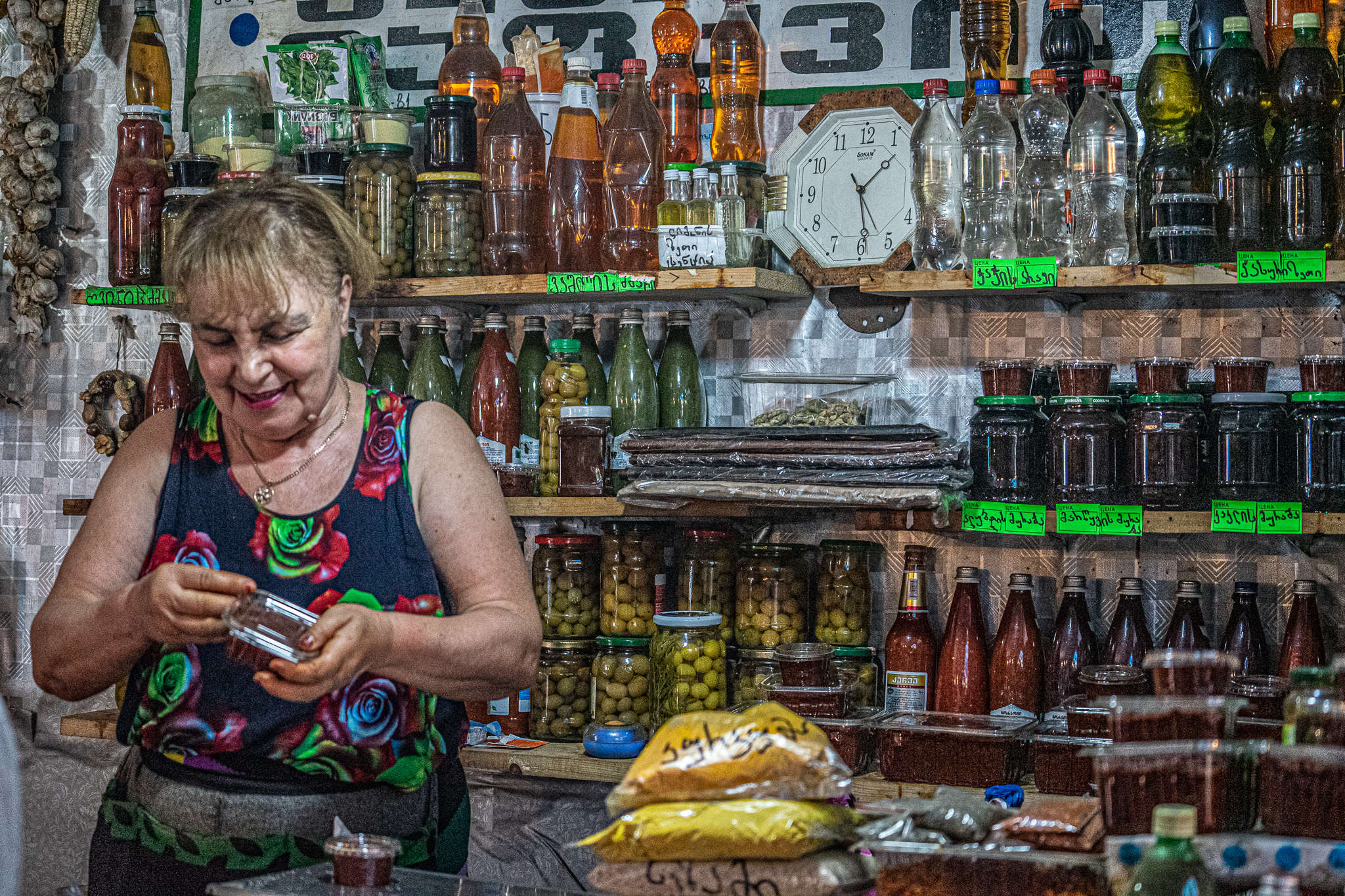 It’s 11 am at the Dezerter Bazaar in Tbilisi, and Tina, a local spice vendor, pulls out a plastic bottle filled with a suspiciously clear liquid that she’s been hiding behind the counter.

I know what’s coming, and as she twists off the top I can already smell the nasal defiling smell of paint stripper wafting towards me.

“Cha Cha!” Tina exclaims happily, before pouring out shots and passing around cups of Georgia’s most infamous alcoholic beverage.

I cringe, but I knock back the Cha Cha, trying not to breathe as I force down the pungent liquid that has an undefinable percentage of alcohol.

Grimacing, I realise that this is just the beginning of my culinary tour through the backstreets of Tbilisi, and there’s much more waiting for me over the next 6 hours.

A Cure for any Hangover

I’d met with Paul Rimple of Culinary Backstreets and the rest of our tour group just one hour before I was forcing down Cha Cha at the local market in Tbilisi.

Already, Paul – a journalist and lover of all things Georgian, who’s lived in the post-Soviet nation for several years – had shown us traditional Georgian bread making in Tone ovens, and shared out sticks of Churchkhela, a walnut snack that he calls “the original Georgian energy bar”.

At the market, perhaps knowing that because this is Georgia, and it’s an impossibility to go even a single day without being offered wine or Cha Cha, Paul assumes that many in the group will be nursing hangovers from the Friday night before, and he guides us through the rows of fruit and vegetable stalls to buy a large quantity of Matsoni.

This yoghurt-like drink that’s mixed with cheese is “a cure for any hangover”, Paul claims, as he passes around polystyrene cups filled with the Matsoni.

Paul’s assumption is resoundingly correct, and indeed, myself and many others are nursing mild hangovers from the night before. Paul hands me the cup of Matsoni, and I tentatively sip at the sour, yoghurt and cheese mixture, before hungrily slurping down every last drop.

“They even have Matsoni delivery guys here in Tbilisi”, Paul muses, “They do great business”.

“This market is called the Dezerter Bazaar because at the end of the First World War deserting soldiers would come here to sell their weapons”, Paul explains as we browse through the stalls, freshly invigorated by the Matsoni.

There aren’t so many weapons for sale anymore – or at least on display, anyway – but the market is one of the biggest in the city, with many of the stalls being owned by people who fled their homes in the west of Georgia, when the Soviet Union collapsed and the country was thrown into a violent period of ethnic conflict.

“This is Louisa”, Paul says as he introduces the group to a lady selling salts and spices from a stall in the maze of alleys that make up the bazaar. Louisa specialises in Svanetian Salt, a spicy concoction of salts and spices that’s originates from the high mountains of Svaneti, and that makes for an excellent addition to almost anything.

Like many working in the market, Louisa fled from the west in the 1990s. Originally from Sukhumi, the largest city in the breakaway territory of Abkhazia, Louisa set up shop here at the Dezerter Bazaar selling spices after the war.

The bustle of the market place and the smiles of the vendors hides a deeper tragedy that lies beneath the mounds of colourful spices and stacks of fruit and vegetables.

Everyone at the Dezerter Bazaar has a story.

Because this is Georgia, it’s not long before the alcohol starts flowing. By 11 am, I’m already drinking Cha Cha, a strong homemade spirit that’s distilled from the leftover products of homemade wine. It has a special place in the hearts of Georgians and it’s led to the hangover of many a visiting tourist.

Fueled by the recuperating effects of the Matsoni, I’d shotted back Tina’s Cha Cha, and after browsing through a few more stalls, Paul had soon led us to the wine.

Georgia has a long tradition of winemaking, a tradition stretching back thousands of years, and the country is famous – or perhaps infamous – for its wine culture. At meals and Supras – an enormous, Georgian feast – vast quantities of wine can be consumed in hours, and at the market, homemade vintages are available to buy in 23-litre containers, and it costs just 1 USD per litre.

We won’t be purchasing quite such a quantity on this tour, but we are scheduled for a wine tasting in Old Tbilisi in the afternoon. Before we dip into the more expensive side of the modern Georgian wine industry though, Paul wants us to try “the cheap stuff”.

Passing around plastic cups filled with an amber coloured wine that’s commonly made in the villages, I’m surprised that actually, I quite enjoy this cheap, market wine.

To give us an insight into the full spectrum of Georgian wine and cuisine, Paul takes us from the Dezerter Bazaar to the revamped streets of Old Tbilisi, where wine cellars abound and restaurants can be found on every corner.

Underground, we enter a classic Georgian wine cellar, and it’s stacked from the ground up with bottles from across the country. This is the culmination of thousands of years of Georgian winemaking, and we try different reds and whites from the different regions.

The wine is great, but for Georgia, it’s expensive too, and I know that the real culmination of the Georgian winemaking has long been available at the local markets and in the villages, and not just in these fancy cellars.

The culmination of my own culinary tour through the backstreets of Tbilisi is about to begin too, and Paul leads us from the wine cellar and into a ramshackle courtyard in the Old Town, where rustic tables are laid out across the concrete.

This is Ezo, where Georgian traditions are being upheld in the most authentic manner possible, while the restaurant strives to provide fresh and organic products for is customers.

To round off the day we’re served yet more Georgian wine in a large carafe, alongside a veritable feast of Georgian dishes that includes Lobio – beans in a clay pot – and Pkhali – a dish that’s a mix of spinach and spices, amongst, many, many more.

Thanks to Culinary Backstreets for inviting me onto their Tbilisi tour, and to Paul Rimple for leading us through the Georgian capital. My tour was provided free of charge, but as always, the opinions expressed in this article are my own!

You can find out more about Culinary Backstreets, and their culinary tours across the world, HERE.