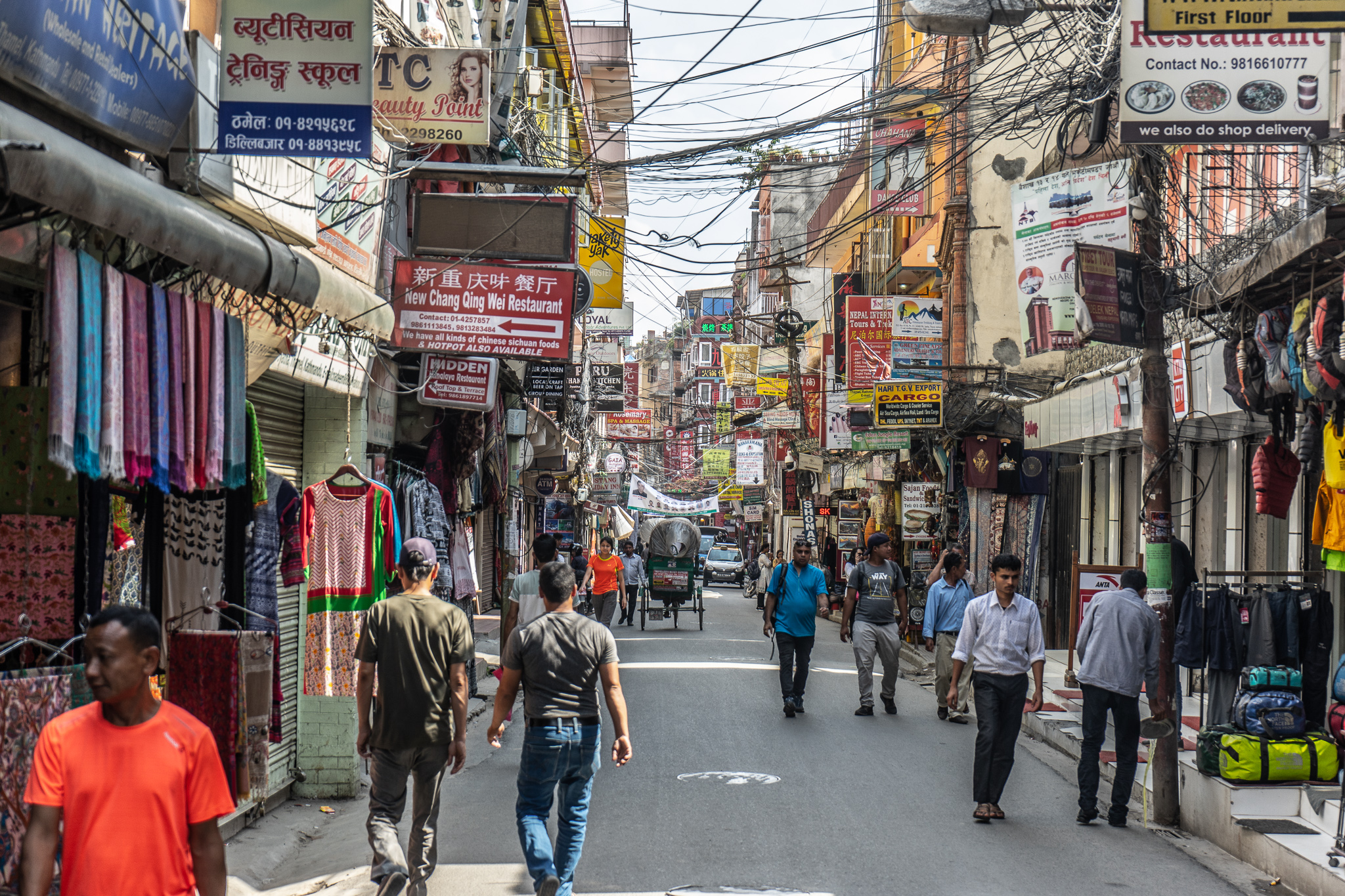 Kathmandu is the chaotic, colourful, and captivating capital of Nepal. It’s a city that sweeps you in with its sights, sounds and smells. It’s a city where around every corner, something interesting, intriguing or downright irreverent is happening. There are a fascinating array of places to visit in Kathmandu, and it’s a city that has been pulling in travellers with its charms and mysteries for centuries.

Despite hundreds of years of history, many of the places to visit in Kathmandu suffered immensely during the devastating 2015 earthquake, as did the millions of people that call the city home. The capital is on the road to recovery though, and many historic sights have been restored, even if others have been lost.

But Kathmandu is never just about seeing sights. This is a city that needs to be lived and experienced. The joy of travelling to Kathmandu and Nepal is in the people, it’s in the freshly cooked momos, it’s on the rooftop bars in Thamel and in the ramshackle streets and alleys of the old city.

Here are the best places to visit in Kathmandu!

Places to Visit in Kathmandu

Thamel is easily the most famous place to visit in Kathmandu. This is the iconic backpacker district, where you can find hostels, rooftop bars, restaurants, trekking shops and these days, big clubs too. It’s the main tourist hub in the capital, and it would almost impossible to not visit, even if you don’t end up staying in the area.

Thamel has long been the capital’s tourist hub – and in many ways, the tourist hub of the entire country too – as for decades, travellers have been using the district as a base. It all began when Nepal became a stop on the Hippie Trail, and these days you can see the legacy of this in the many bars and hostels you’ll find in Thamel.

These days though, Thamel is as much a base for trekkers as it is for hippies – and in fact, due to its touristic nature, prices are inevitably much, much higher for food and drink in Thamel than in other areas. What you can get though, is excellent trekking gear for low, low prices. The shops and vendors on the streets overflow with gear from international brands, both fake and real.

It’s touristy, but it’s a lot of fun, and away from the main drag it’s easy to quickly lose yourself amongst the local alleyways and narrow streets of Thamel, for a more local experience. Thamel has character, that’s undeniable, and it’s always going to be one of the best places to visit in Kathmandu.

The Garden of Dreams

Thamel is busy and chaotic at the best of times. That’s part of the district’s allure. Rickshaws trundle down the narrow streets, markets and food stalls spill out onto the streets, and taxis and motorcycles honk their way along the roads.

If it does all get a bit too overwhelming though, then luckily, there’s a garden of peace and tranquillity that’s found within Thamel. Loftily known as the Garden of Dreams, it’s an escape from the turbulence of the outside world.

The Garden of Dreams – also known as the Garden of Six Seasons – was inspired by the landscaped gardens of the Edwardian era, and was built in the 1920s to suit the prevalent style made fashionable by British landowners.

The garden was designed with six pavilions – hence, six seasons – and today is a fantastic place to escape the dust and noise of Thamel.

For centuries, Nepal was ruled by an absolute monarchy, and it was only in 2006 that the last king of Nepal was overthrown during a revolution and the country became a Republic.

Close to the Garden of Dreams, you can visit the Narayanhity Palace. Now a public museum, this was the royal residence of the monarchy until their final abdication. The building dates to the 19th century, and while being a lavish and opulent endeavour, it’s also seen more than its fair share of bloodshed.

If you want to learn about political upheaval and revolution in Nepal over the last century, the Narayanhity Palace is one of the most intriguing places to visit in Kathmandu. The Nepalese monarchy had a habit of overthrowing one another or being overthrown themselves, and many massacres took place within the palace walls.

The most infamous massacre that occurred at the palace was in 2001 when 10 members of the royal family were shot in a bloodbath. You can still see the bullet holes in the walls today. It’s dark tourism, and it’s utterly compelling.

Kathmandu Durbar Square has long been one of the most popular places to visit in the city. ‘Durbar’ means royal, and so this is a royal square. Across the city and across the country even, you can find many different Durbar Squares, a legacy of hundreds of years of royal rule in Nepal.

In the capital, the most prominent royal square is known simply as Kathmandu Durbar Square. Constructed in front of a former palace – not the Narayanhity Palace mentioned above – the square was once the centre of royal life in the city, although of course, since Nepal became a republic, it has simply become a tourist attraction.

Kathmandu Durbar Square is part of a UNESCO World Heritage listing which encompasses several other royal squares in the Kathmandu Valley. It’s an interesting place to visit, and you’ll find Hindu temples, towers and plenty of other tourists.

A second royal square under the UNESCO World Heritage listing can be found at Bhaktapur, an old city in the Kathmandu Valley, which is around 15 kilometres away from the capital itself.

Bhaktapur was once its own independent kingdom before the Kathmandu Valley was united under a single monarchy several centuries ago. The old city has retained much of its former regalness, however, and the Durbar Square, despite being damaged during the 2015 Nepalese earthquake, has remained an enduring symbol of local history, and a much-visited tourist attraction.

It’s a great place to spend the day, and a chance to get out to Kathmandu and to experience the rest of the valley.

Nepal is a country that’s comprised of a complex mix of ethnicities, cultures, languages and religions. It’s a diverse and multicultural nation, and while the old monarchy may have been Hindu, a large proportion of the Nepalese population are also Buddhist.

Across the capital, you’ll see prayer flags flying and stupas glowing in the sunshine, and one of the most important places of Buddhist worship you can visit is the Boudhanath Stupa.

This is one of the largest Buddhist stupas in the world and it’s thought to date back to around the 14th century. It’s long been an important centre for the religion in Kathmandu, but it became even more important during the 1950s, when refugees from Tibet began to use the stupa as a place of worship too, and when they began to increase exponentially in numbers after the Chinese occupation of Tibet.

Kathmandu is a city that’s bursting with excellent food, and you can find a huge range of Nepalese, Indian and other international cuisines across the capital.

While there are hundreds of restaurants to choose from, you might want to opt for the street food, because this is where you’ll find some of the best tasting snacks and dishes in Kathmandu.

Venture down the hidden alleyways and look where the locals go to source some of the most popular dishes or join a local food tour to get the insider knowledge and to be shown the best places to eat in Kathmandu.

Before you leave the city, make sure you’ve indulged in momos. This classic Nepalese dumpling dish is one of the best in the world, and you’ll find them served with a huge range of fillings and a huge range of styles.

Okay, so this might seem like a slightly bizarre suggestion when you are in Nepal, but Kathmandu has the strange distinction of being one of the few cities in the world that hosts a North Korean restaurant run by the North Korean government.

If like me, you have a strange fascination with the hermit kingdom, then you should try and get here, to see what the food exactly is like – I ran out of time, unfortunately.

The restaurant is supposedly run by and staffed by the embassy of the DPRK in Kathmandu, so you would, unfortunately, be contributing to the government if you visited. If you aren’t comfortable with that – we’ll leave that debate for another time – then don’t visit.

Lord of the Drinks

Kathmandu is a great night out, and if you are looking for a party or a few drinks before or after your trekking begins in Nepal, then the only place to go is Thamel.

In Thamel, you’ll find rooftop bars, pubs, live music and even clubs. If you want an epic night out, then head to Lord of the Drinks (LOD).

This awesomely named venue is the biggest and newest club in Thamel, and it’s unlike anywhere else in the city.

Once you’ve seen all the best places to visit in Kathmandu itself, then you’ll want to get out of the city and start exploring the rest of the country. Let’s face it, no one comes to Nepal just to stay in the capital.

After you’ve geared up in Thamel, and sourced any last-minute trekking gear you might need, then it’s time to hit the mountains. While many travellers will make their way straight to the Anapurna Circuit or to Everest Base Camp, there’s actually a much less trodden trek which is closer to Kathmandu.

The Langtang trek is one of the best treks in Nepal, and the Langtang National Park is just to the north of the capital. The Langtang Valley trek starting point is 140 kilometres away – although remember, this is Nepal, and this is remote Nepal, so it can take the whole day to get there by bus!

The Langtang Valley trek can take you well over 4000 metres in altitude, and you’ll see snow-capped mountain peaks on the border with Tibet. Much of the Langtang Valley was destroyed during the 2015 earthquake, and they are only now just recovering, and the locals will appreciate any support and extra income from tourism.

You can easily spend at least a week hiking through the Langtang Valley, and you’ll find that compared to the more popular trekking circuits in Nepal, there are few other tourists around.

Disclaimer: My trip to Nepal was provided by the Nepal Tourism Board, as part of HTM 2019, however, all opinions expressed in this article are, as always, my own!

Eating My Way Through The Street Food of Kathmandu

A Guide to the Langtang Trek in Nepal