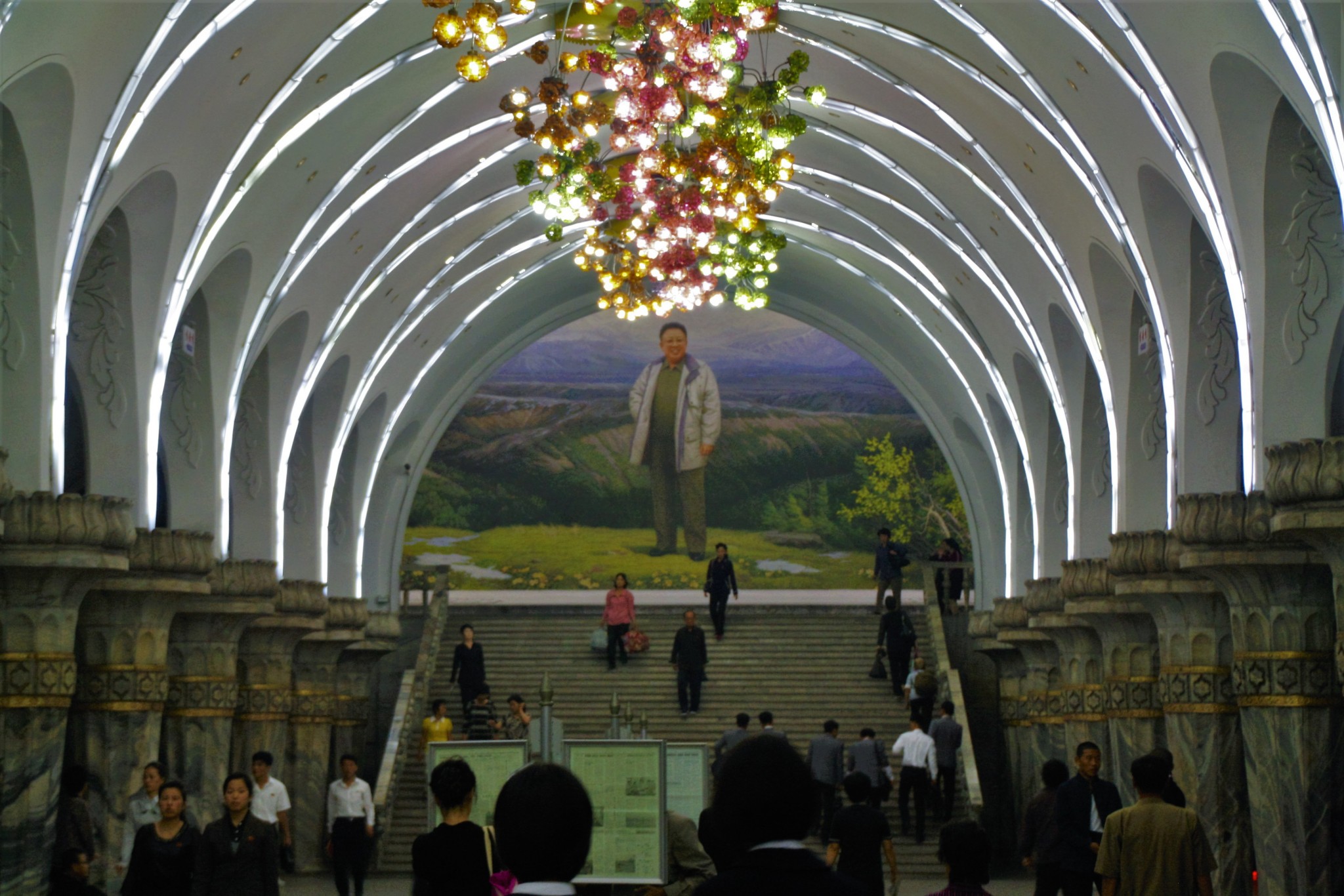 In the Democratic People’s Republic of Korea I went for an underground ride on the Pyongyang metro system!

Few tourists make it to the People’s Democratic Republic of Korea, but for those brave travellers that do, a highlight is a ride on the capital’s metro. And this is a public transport ride like no other, for the Pyongyang Metro is one of the most secretive underground systems in the world. It’s North Korea, and as you might know, they like to keep things under wrap. 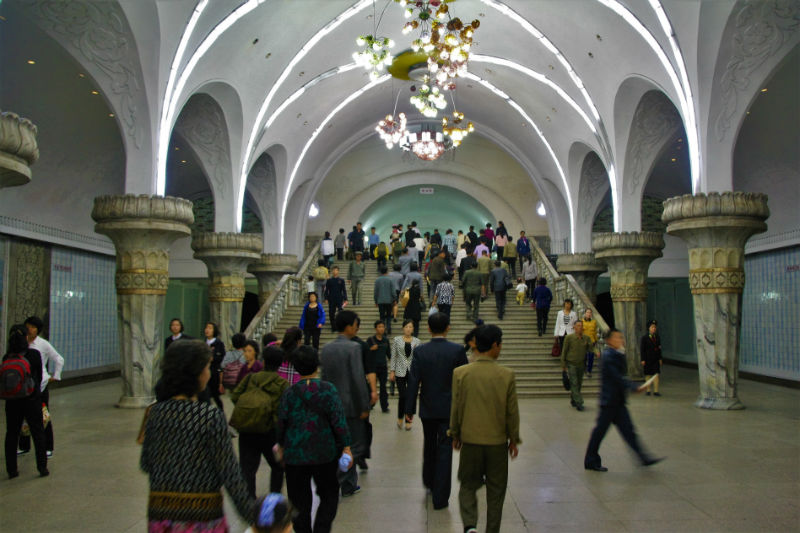 The deepest metro system in the world

North Korea is heavily militarised. There’s a huge standing army ready to wage war against Imperialism and a vast defence network ready to repel any threat from outside the borders or within. Part of that system is the Pyongyang Metro, which at 110 metres in depth is the deepest underground Metro in the world. And that’s because it also has the handy function of being an extensive bomb shelter for the citizens of the capital. 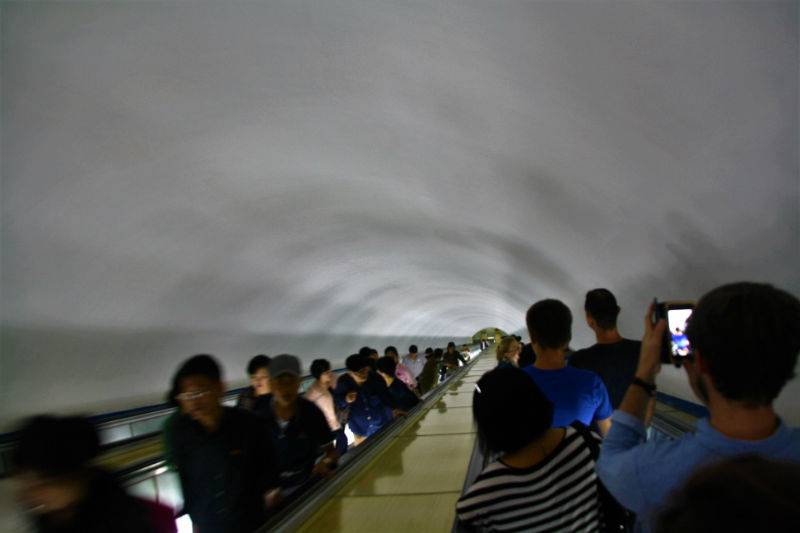 The Pyongyang Metro has sixteen operational stations spread across two intersecting lines. Foreigners are rarely permitted to see anything other than a pre-approved route, few visitors have seen the entire extent of the system, and indeed, theories abound that perhaps there are secret military lines running underneath the city too. The two known lines are the Chollima Line- named for a legendary winged Korean horse of old- and the Hyoksin Line- which in English I was told means to renovate or rebuild, a constant theme in the life of a North Korean. 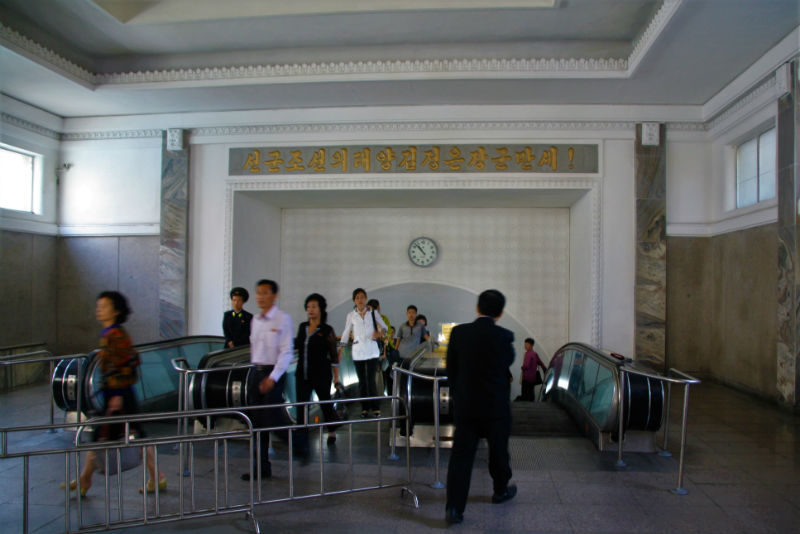 I was riding on the Chollima Line, and of the two this is the longer. Still, I was only going to be riding for three stops so that hardly mattered. The starting point of the line is Puhung Station, and this is where our tour group began the long descent downwards into the metro system. 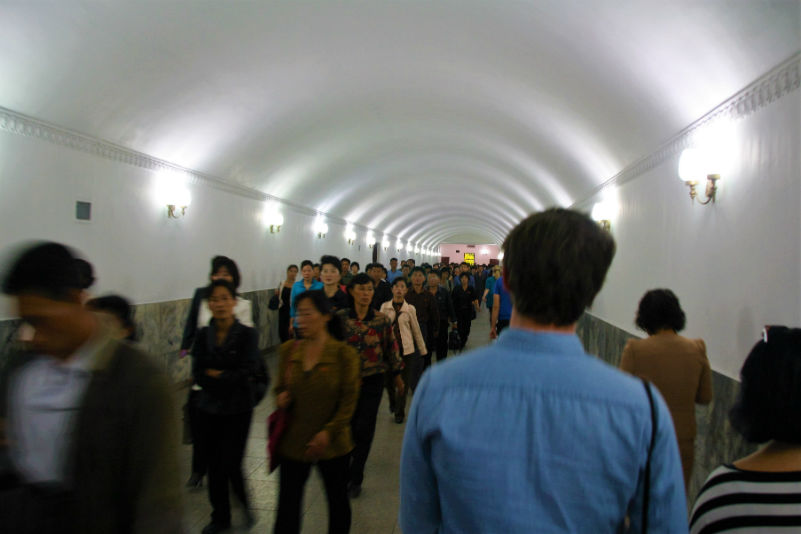 The barriers were opened for us, and I was ushered under a golden political slogan paraded above the entrance way and onto the escalator for the three minute downward commute to the platforms. The metro was busy, with local citizens hurrying past, most staring rigidly ahead, only a few daring to glance at the foreign faces within their midst, and after a brisk walk through the arched passageway I was looking down on the Pyongyang Metro. 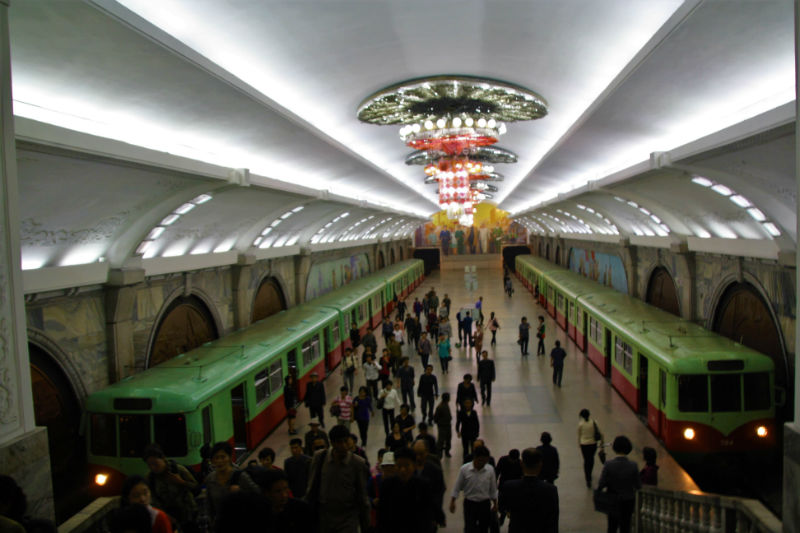 One train had just arrived, and was disgorging its passengers across the platform while another waited to depart. At the far end of the station was a lavish mural depicting Kim Il Sung and his revolutionary antics, while on the walls were equally decorative murals of revolutionary workers, presumably in the midst of revolutionary work. 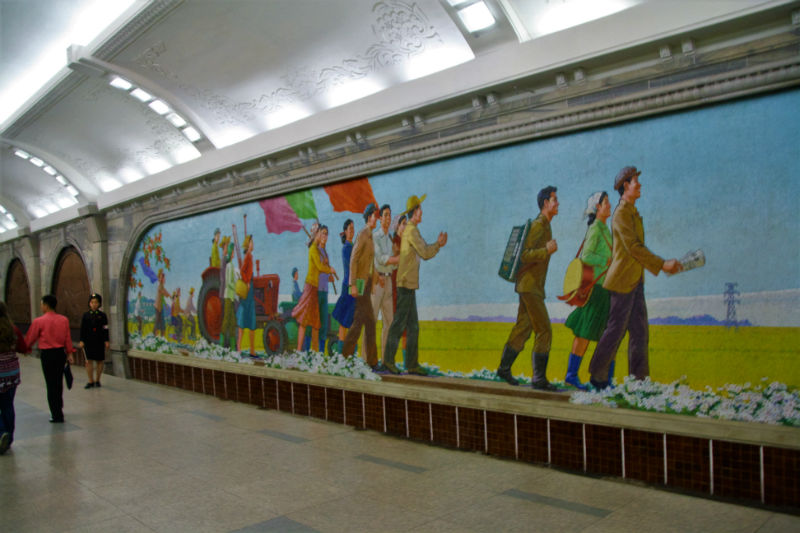 The platform conductors- all young ladies in crisp uniform- were directing the trains and passengers from the platform edge as I marvelled at the socialist art surrounding me. Puhung was a grand station, and of course, the first station that a tourist gets to see. 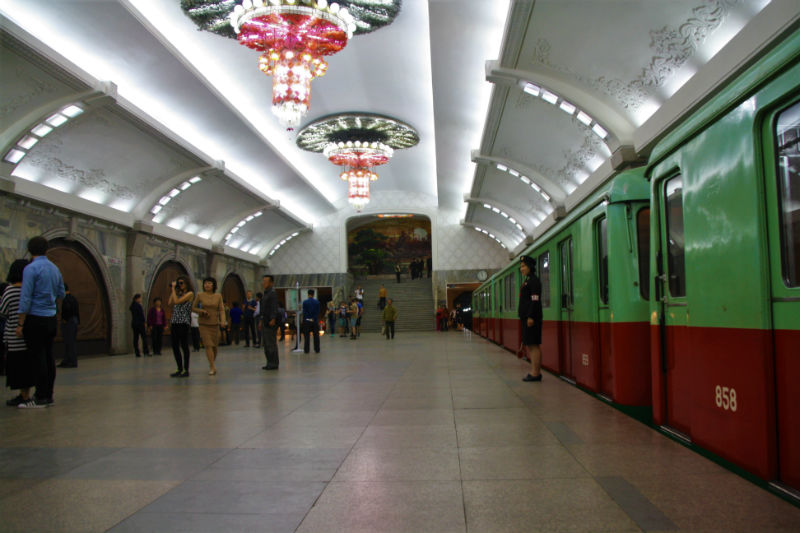 The trains themselves were old, but meticulously clean, while perfectly aligned portraits of Kim Il Sung and Kim Jong Il were hung in every carriage. Standing up, holding onto a rail, I was soon on my way to the next stop along line, Yonggwang Station. 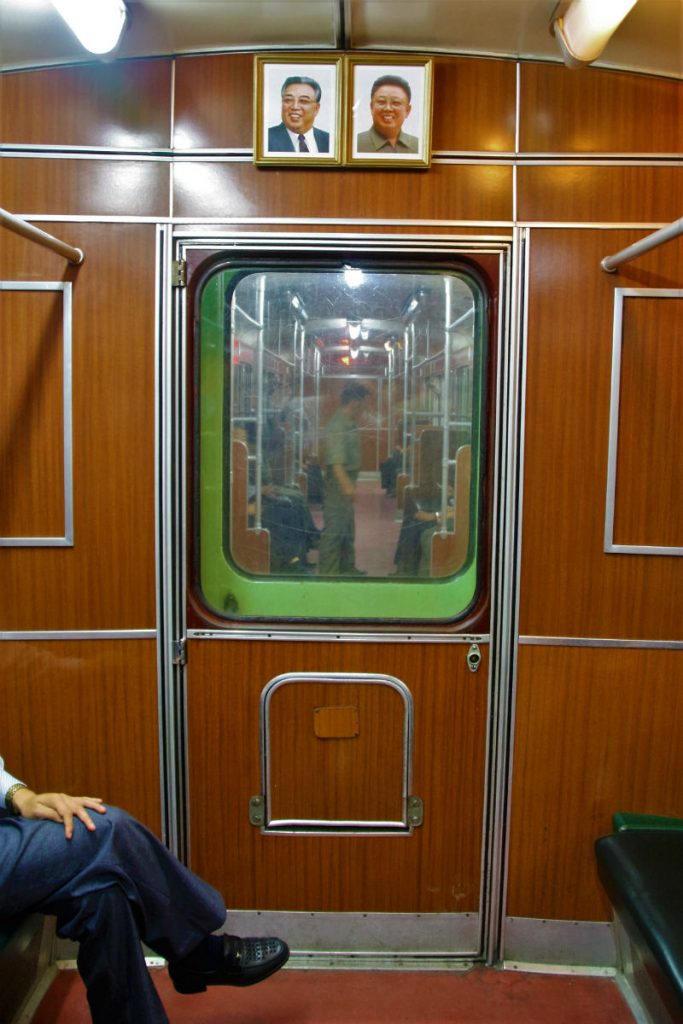 The Grandest of the Grand

Yonggwang was even grander than the first station. And busier too. Koreans were waiting right up against the platform edge as the train pulled in, ready to cram into the compartments. Those that exited marched purposefully towards the exit with unwavering intent and soon the station had emptied, leaving us foreigners to admire the grand arches and colourful lighting. 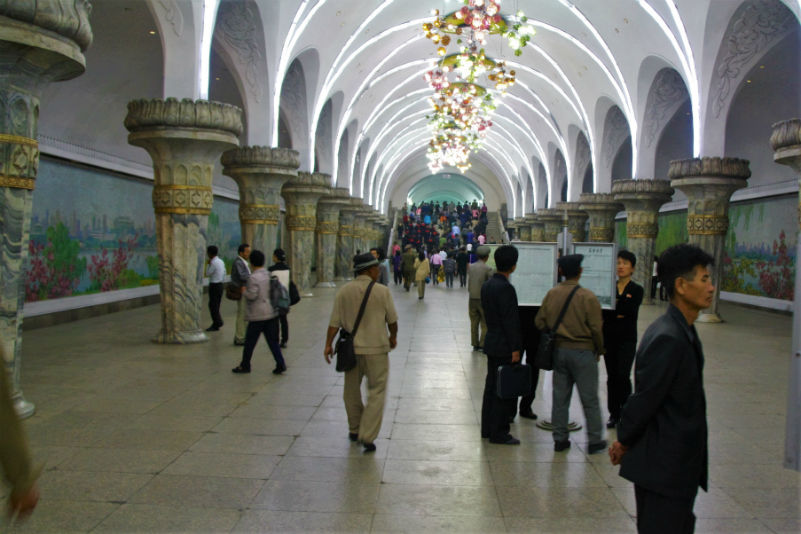 Those that were waiting for their train had the chance to peruse the pages of The Pyongyang Times on carefully displayed news boards, catching up on the latest gossip and happenings from within DPRK. 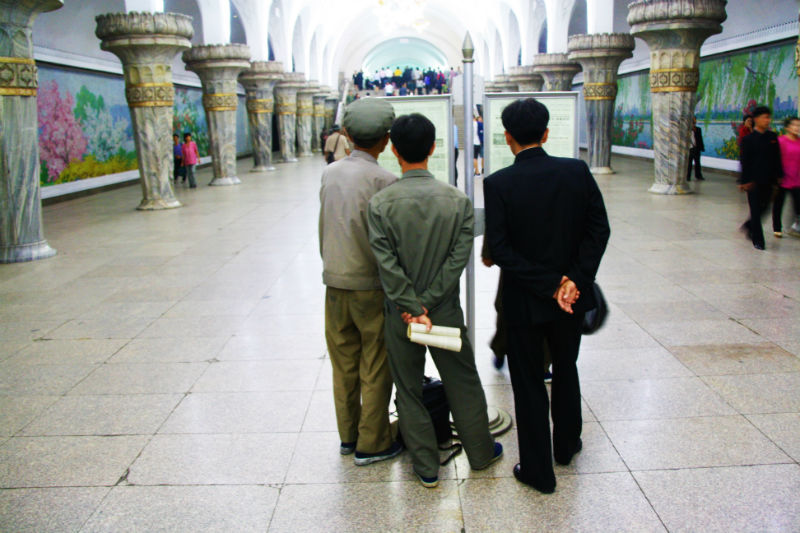 We waited on the platform, watching local life go by as a few trains came and went along the tracks. It was a surreal experience, I felt like a voyeur intruding on the lives of the North Koreans, but in a strange way- knowing how secretive this secluded the nation is- it was gratifying to see. 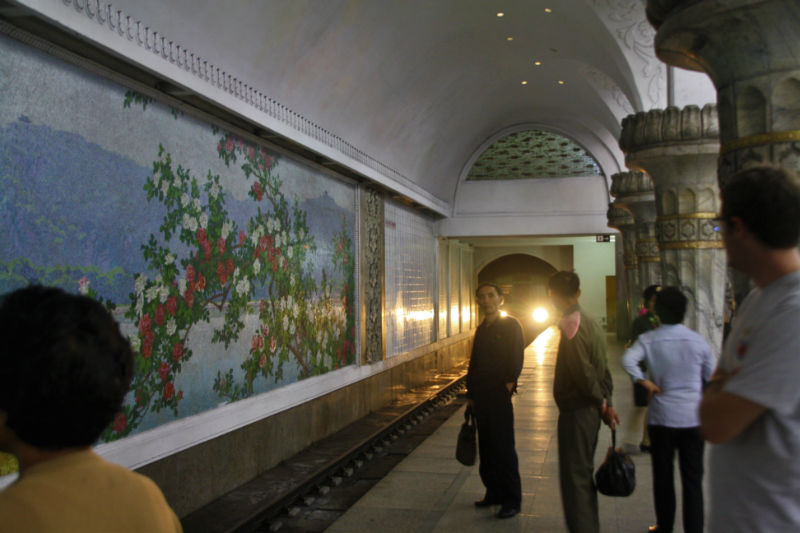 The metro was busy. Our guides explained rather honestly that petrol costs were high in Pyongyang, as it all had to be imported. There are few cars, and almost no private transportation exists. That much was hard to hide when we spent most other days above ground driving around the quiet streets. And at only 5 North Korean Won a trip- almost nothing in Western terms- the metro was the most important and cost efficient means of transportation for many citizens. 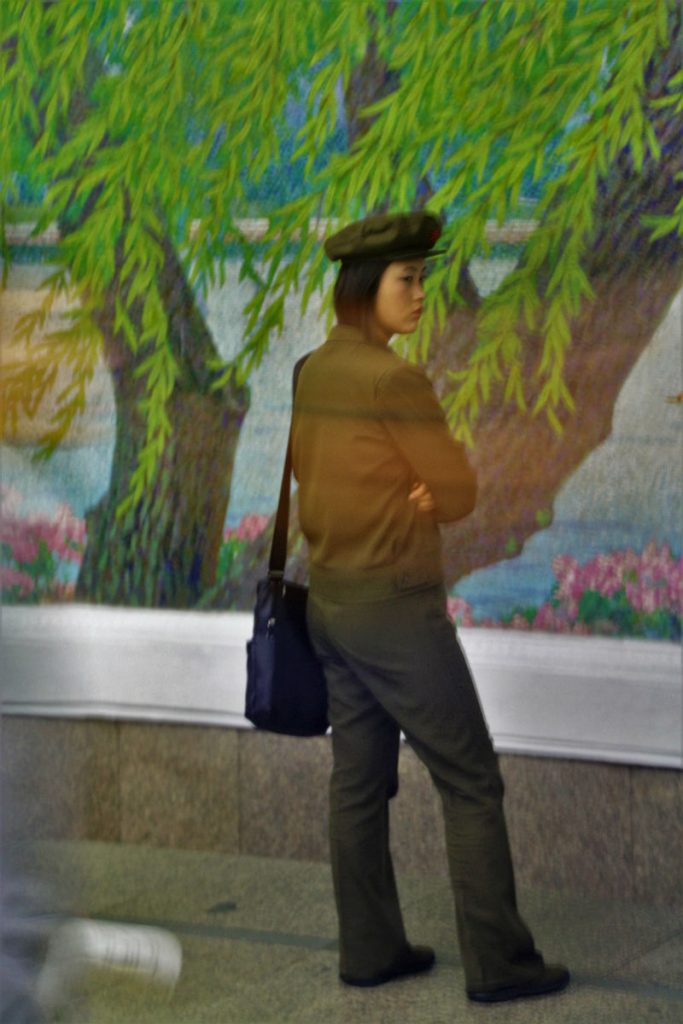 The third and final station on the pre-approved itinerary was Kaeson. This means Triumph, as the station is outside Pyongyang’s very own Arc de Triomphe, a sight of dizzying proportion and revolutionary courage that greets all who exit the metro with a display of…well…triumph. Exiting the train before this though, on the platform I was greeted by the warm embrace of a golden statue of Kim Il Sung himself. 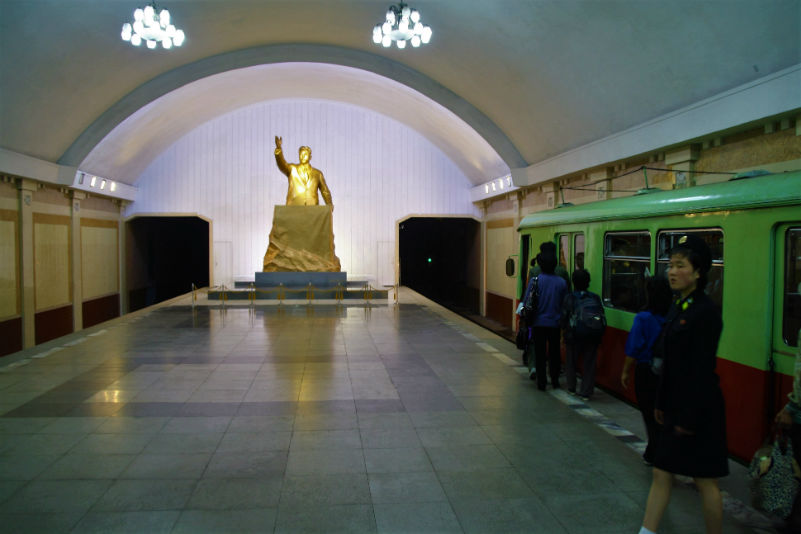 The Pyongyang Metro is possibly the most socialist of socialist metros in the world. Kaeson station exemplified this trait. The socialist realist artwork on the walls was full of revolutionary zeal and fervour. 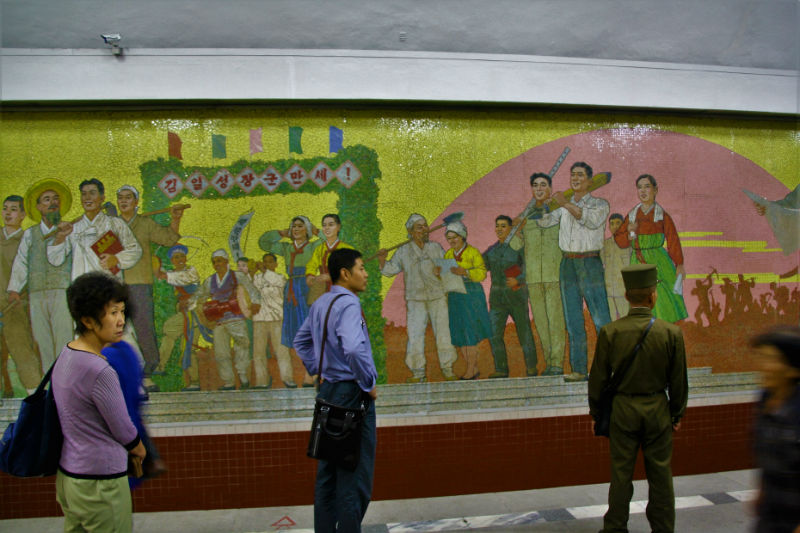 The murals were inspiring to all who waited for their trains, shining examples to be carried forward into their working day and beyond. And to think, on the London Underground there’s just McDonald’s adverts and people in lingerie. 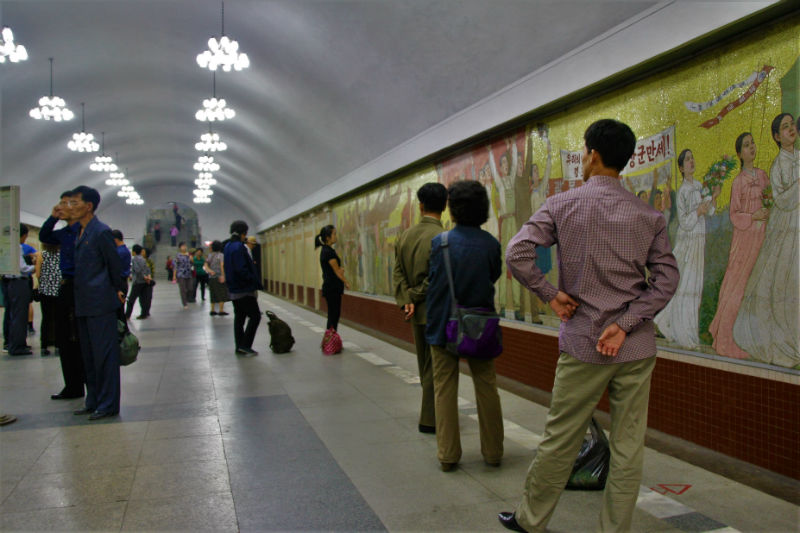 Our allotted time on the Pyongyang Metro came to a halt at this third and final stop. Few have ventured further than this. In the corridor on the way out a small shop was selling all manner of fluffy, cuddly toys to commuters, presumably for comfort if the metro ever had to actually be used as the giant bomb shelter it was designed to be. 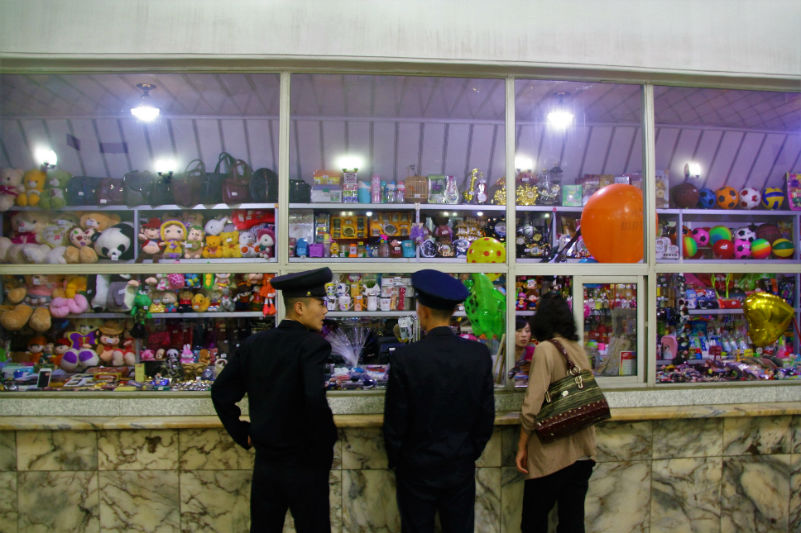 How does Pyongyang Metro compare to the London underground?

Mrs O, one of the ever present tour guides who accompanied my group for the whole week in Pyongyang asked me on the way out of the last station what the London Underground was like. I told her my honest opinion, that the Underground is busier, more crowded and not so extravagantly socialist. She took some pride in the state of her nation’s metro from my vague answer, but I didn’t go into too much more detail about the state of the London Transport System. It’s wise not to talk too much when in the People’s Democratic Republic Of Korea, but after a long escalator ride to the surface, I emerged to the glory of the Arc de Triomphe. 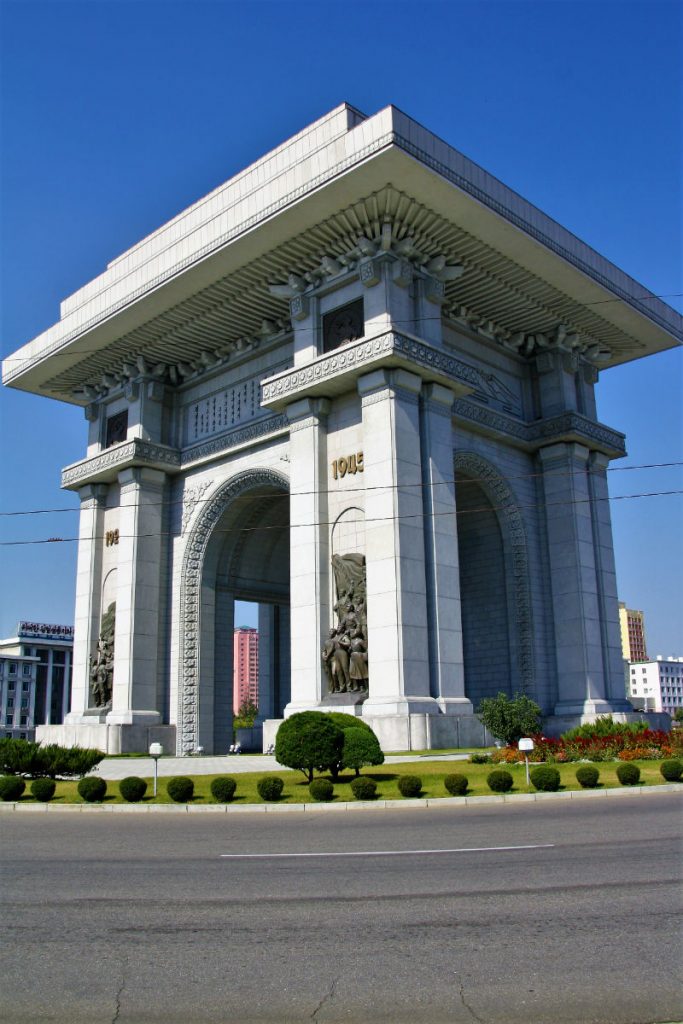 A Casual Day Out At The Pyongyang Zoo