Eating My Way Through The Street Food of Kathmandu 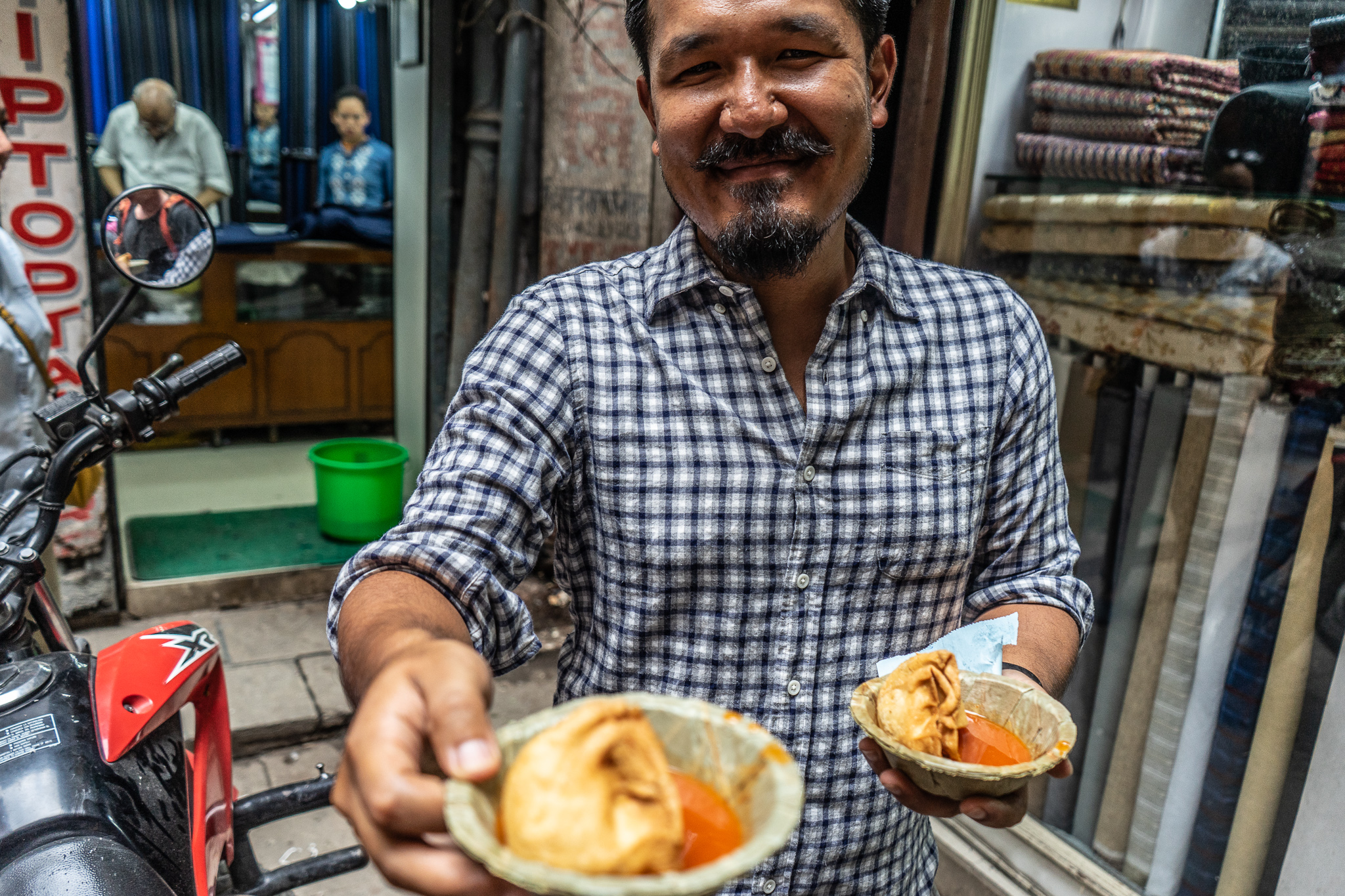 “I hope you haven’t eaten yet”, says Anil with a knowing smile as we meet on the dusty streets of Thamel in the heart of Kathmandu. “Because we will be eating a lot this afternoon!”

Anil is the manager of Backstreet Academy, a travel company that specialises in creating cultural experiences across Asia, and with the help of his trusted food experts, he was about to immerse me in the culinary delights of Nepalese street food.

I hadn’t eaten since breakfast, and it was now well past midday, and I was ready to eat whatever amount of Momos or curry they could throw at me while we explored the alleyways and hidden eateries of Kathmandu.

This is a local tour because this is where Anil and his friend and colleague Kanti, who is helping to guide us through the maze of streets that is Kathmandu, both grew up.

“All these places, they are places that my Mum took me to when I was younger”, Anil tells me as we push our way through the crowded streets. This is Thamel, a district in the Nepalese capital that’s known for its backpacker hostels, clubs that stay open until the early hours of the morning and shops that sell knock off North Face gear to would-be trekkers.

In many ways, this is tourist central, and as I walk past shops lined with sleeping bags and hiking boots for the treks into the mountains, dodgy-looking guys whisper offers of magic mushrooms while rickshaws rattle past.

For Anil and his team though, Thamel is much more than the superficial sights that I was observing. To them, this is very much home, and they were about to help me to uncover the hidden world that lies amongst Thamel’s non-descript parking lots and behind faded shopfronts.

This is a labyrinth to the uninitiated, but I was about to be shown into the belly of Thamel, and I was about to gorge on Kathmandu’s best street food.

Pushing past crowds in the packed streets, Anil ushers me through a darkened doorway and into a small courtyard behind a row of shops. Suddenly, the noise and the dust of the outside street disappears completely, and there’s nothing but the sound of cooking, eating and talking echoing off the walls.

Sat down, two women are moulding a dough-like substance into pancake-shaped treats on a hot plate, quickly shaping and cooking them, before passing them to waiting customers.

Kanti hands me an aluminium foil plate with fresh pancakes that are covered in some sort of curry sauce, but these aren’t normal pancakes as I would know in England. “These are called Bara”, she explains. “They are lentil pancakes, and be careful because they can be a bit spicy!”

When I’m finished eating, Kanti hands me another dish. A large dumpling-like creation that quickly takes the edge off the spicy Bara pancakes. “This is Yomari”, Kanti tells me as I bite into the thick rice flour.

The inside is filled with condensed milk and cheese. It’s good, and I’m barely listening as Kanti goes on to explain how these giant dumplings are “culturally significant”, and used in certain ceremonies in different communities across the country. I can confirm that Yomari is delicious, but just what exactly those culturally significant ceremonies are, I couldn’t tell you.

The Best Momos in Kathmandu

“Our next stop is the best Momos in town!” Anil exclaims excitedly as we leave the remains of lentil pancakes behind and head back onto the dusty streets of Kathmandu.

I’m excited because this is a street food item on the menu this day that I already know, and that I know well from my time trekking the Langtang Valley. I’m excited, not just because Momos are delicious, but because I know that wherever you go in Nepal Momos are created differently.

If there’s any Nepalese dish that should long ago have broken onto the international scene, it’s Momos. Momos are dumplings. Delicious dumplings which can be steamed or fried, and which can be filled with meat, vegetables or even mars bars and snickers.

The possibilities are endless, but somehow, outside of Nepal, this heaven-sent dumpling dish has yet to rise from the shadow of Dim Sum, or Gyoza, despite being able to compete in all the same fields, be it taste, texture or for potential creativity.

“Momos are a mix of Chinese and Tibetan food”, Kanti explains to me as we duck into an open courtyard from a crowded alleyway. Amongst the crowds, I almost miss the turning, and Anil has to grab me as he waits by the entranceway.

At the far end of the courtyard, hidden from the surrounding streets, is a simple Momo stall run by a family that lives in this old square, a rustic square that’s at the very least a few hundred years old.

“Momos are always different depending on which ethnic group you belong to. Each group has a different style of Momo”, Kanti continues to explain as I eye up the dumplings being steamed by the family under big metal lids. “The Momos we are having now are from Kathmandu, from the Newar people who are the original inhabitants of the city”.

Anil hands me a bowl of Momos that are swimming in sauce as Kanti tells me all about these outrageously good dumplings. As I begin to slurp up the spicy sauce and the meat-filled, steamed dumplings, she goes on to say that “Momos are very much a part of local tradition. In Langtang for instance, Momos are fried, and there would be no sauce. Here, in Kathmandu, they are steamed, and there is lots of sauce!”

The Momos are good, and they taste fresh and almost healthy. “These guys don’t use any fat in their cooking”, Anil says when I ask how they are prepared. “Many other ethnic groups in Nepal will use lots of fat, but the Newar people say no to this. That means that there are lots of fresh flavours and they aren’t too bad for your health either!”

The family have a steady business outside their home, and it seems that Anil and Kanti aren’t the only ones who think that these could be the best Momos in Kathmandu.

From the best Momos in Kathmandu, we moved across the city and into a cramped parking lot in a residential square that, strangely, is home to one of the busiest Samosa stands in the Nepalese capital.

These crispy pasties are stuffed with meat and vegetables and they are being fried up fresh, but oily, at the side of the parking lot. The square is full of motorcycles and bicycles and after queuing for Samosas, the local customers simply sit back on the parked bikes and dig in.

It’s an unusual setting, but it’s delightfully atmospheric, and I’m keen to gorge on Samosas as Anil hands me a bowling hot pastry covered in a bright orange sauce.

I take a bite, and I’m surprised because the sauce isn’t spicy, at least not in a fiery, chilli way, but it’s distinctly sweet. It’s a local twist, and in the packed parking lot, I enjoy every bite of the large, stuffed samosa.

A few streets down from the parking lot samosa stand, we stop at another stall that’s doing a brisk trade, this time for a few refreshing sodas.

“This is the Ranjana Soda stand”, says Kanti as I watch two animated men behind the counter popping the tops of soda bottles and mixing up colourful concoctions to serve to their ever-growing line of customers.

This was soda as I’d never seen it done ever before. The soda sellers were mixing carbonates, liquids, sugars and all other sorts of flavouring and additions to create super fizzy drinks.

There are peculiar items on the menu such as Interesting Soda, Medicated Soda and Ice Cream Soda, alongside fruity sodas and anything else you probably couldn’t even imagine.

“Ranjana Soda has been here for at least 100 years”, Kanti remarks as I decide which soda to order from their extensive list.

Kanti recommends the simple lemon soda, and when it’s served,  she insists that I have to “… drink the soda fast because the bubbles are good for you! You have to put the gas in, to get the gas out!”

Belching heavily from the gaseous soda creation I’d just consumed, we head to our final stops of the day, for our last street food experiences of the tour.

Our journey through Thamel’s street food haunts ends with a Dahipuri Chat, followed by a classic lassi to line the stomach.

The Dehiduri Chad is a snack or dessert that’s creamy and saucy, and quite unlike anything I’d usually associate with being a dessert.

The lassi is yoghurty and creamy, and as I watch the crowds mingling outside the lassi shop, grabbing their after-work snacks and treats before handing home for the day, I know that I would never have found any of these obscure vendors and street food stalls on my own in the narrow streets and endless alleyways of Thamel.

Anil and Kanti are hungrily washing down the day’s eating with a thick lassi too, and from the crowds of locals and the faces of delight, it’s clear that this could well be the best lassi in Kathmandu.

Disclaimer: The Street Food Tour in Kathmandu was provided free of charge by Backstreet Academy, however, all opinions expressed in this article, are as always, my own!

I would highly recommend their tour if you’re looking for a local, authentic experience in the city! It takes roughly 3 hours and you get at least 5 stops. The Secret Food Tour costs USD 16 per person. If you’re veggie or vegan, that’s fine, they can easily cater for this too!

My wider trip to Nepal was funded in part by the Nepal Tourism Board, as part of their HTM 2019 conference.