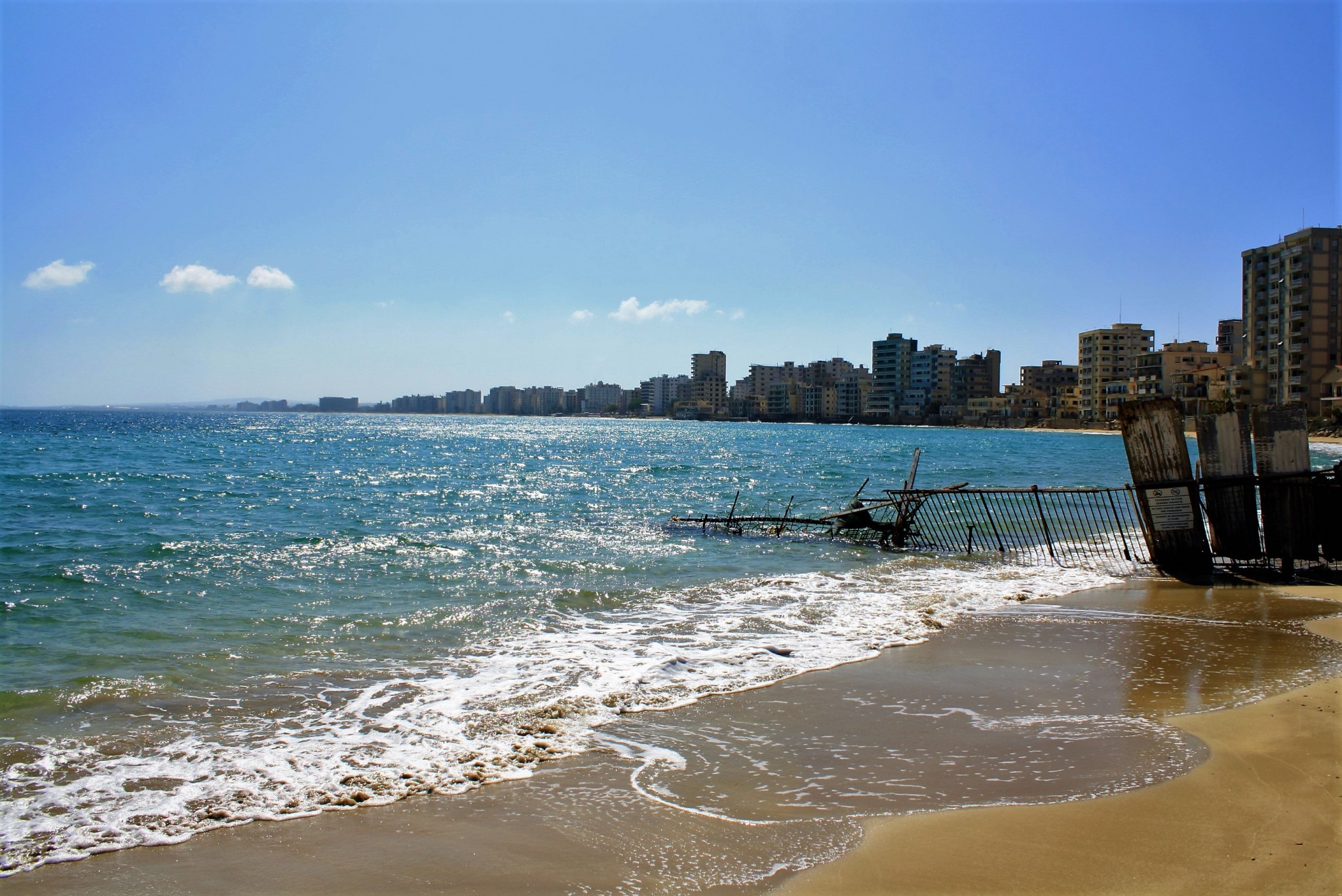 The Cypriot holiday resort of Famagusta abandoned when the Turkish army invaded the island in 1974 is a war torn ghost town on the golden sands of Northern Cyprus.

Famagusta was once the island’s largest holiday resort. Before the 1974 Turkish invasion of Cyprus the city was the place to be. The rich and the celebrities of the day used Famagusta as their holiday stomping ground, and visitors would descend upon the hotels and restaurants, lounging on the golden beaches and in the turquoise waters. It was a Mediterranean holiday resort that would soon turn into an abandoned war zone. 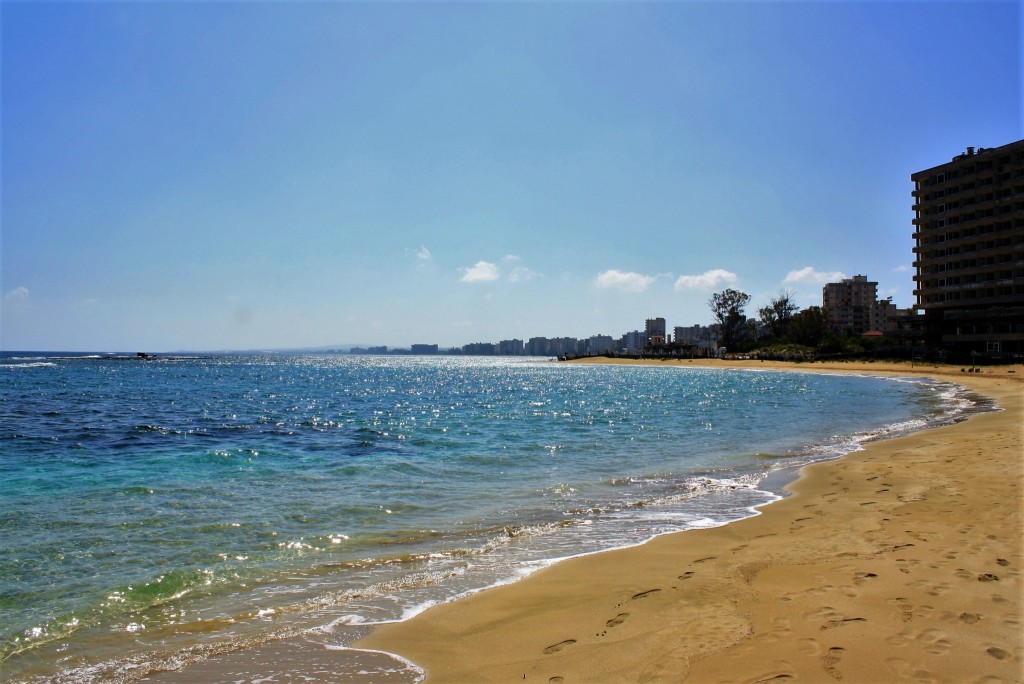 I set foot on the beach and was instantly dazzled by the bright sunshine reflecting off of the colourful waters. The beach here was almost deserted. At one end, near the rocks that begin to form Famagusta’s large and natural harbour, there is a solitary holiday resort. If it wasn’t for the dark history and looming presence of the Turkish military, this would be the perfect place to escape the throttled up and over run beaches of Southern Cyprus. 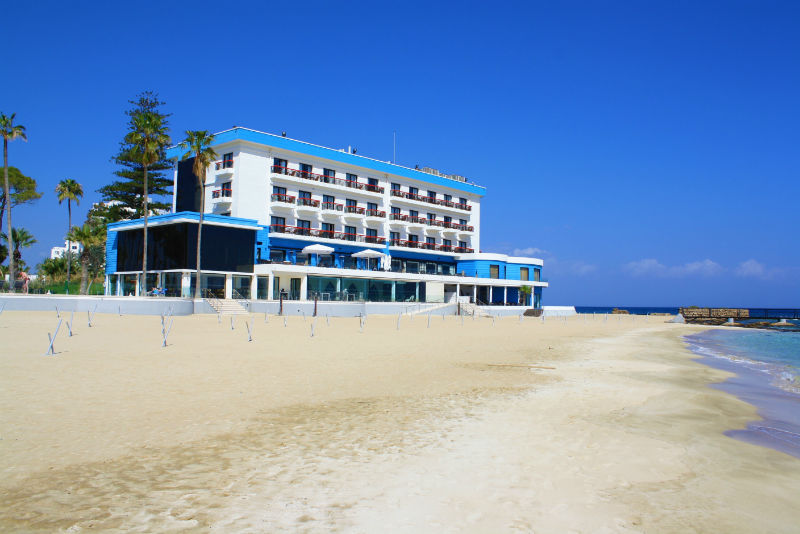 But only a few people were lounging around on the deck chairs or splashing in the open air swimming pool at the Palm Beach Hotel. No one was in the water, and a few tourists wearing blotchy sun cream and sun glasses were strolling across the smooth sand- sand barely untouched by feet or flip flops. 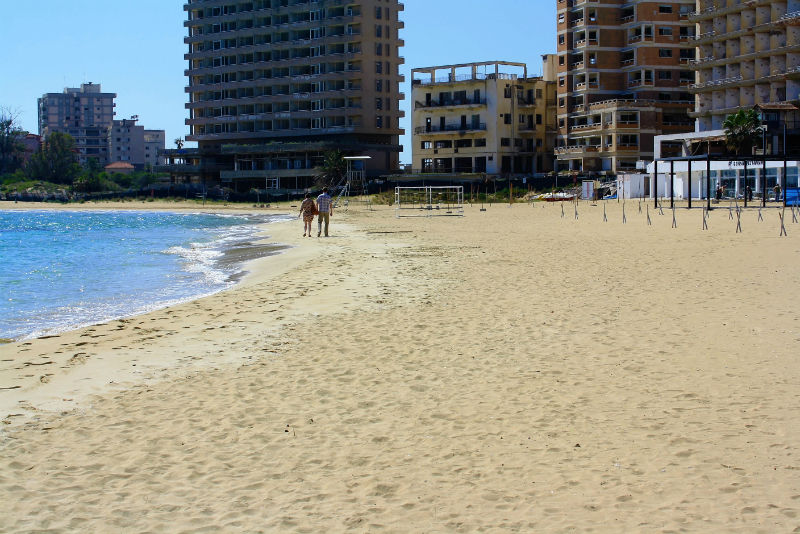 Along the beach, stretching into the distance far beyond the horizon, were line after line of hotels and small skyscrapers. They were built far along the coastline, but it was eerily quiet. There was no life further ahead, and that’s because I could only walk so far up the beach. 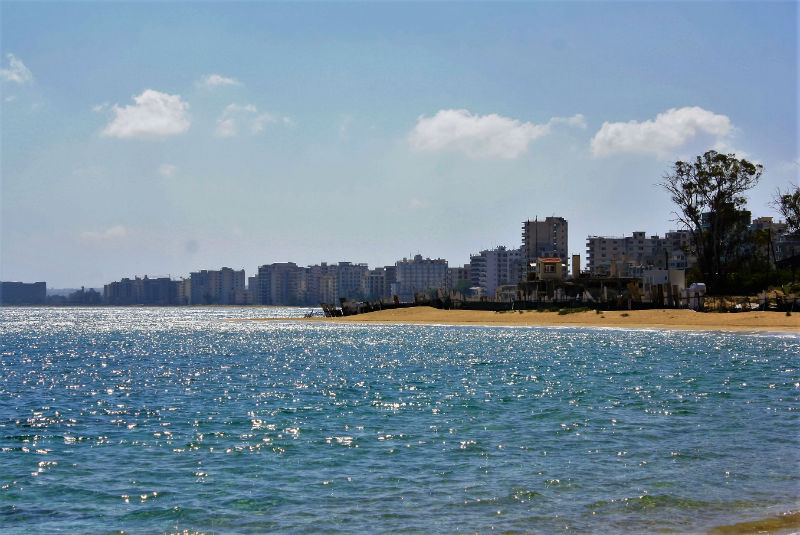 I was soon stopped in my tracks by a barbed wire barricade which jutted out across the beach and into the water. There were imposing Turkish military signs warning me to stay away, to not photograph anything, and looking out across the coast were armed guard posts, casting their shadows across the once lively holiday resort of Famagusta. 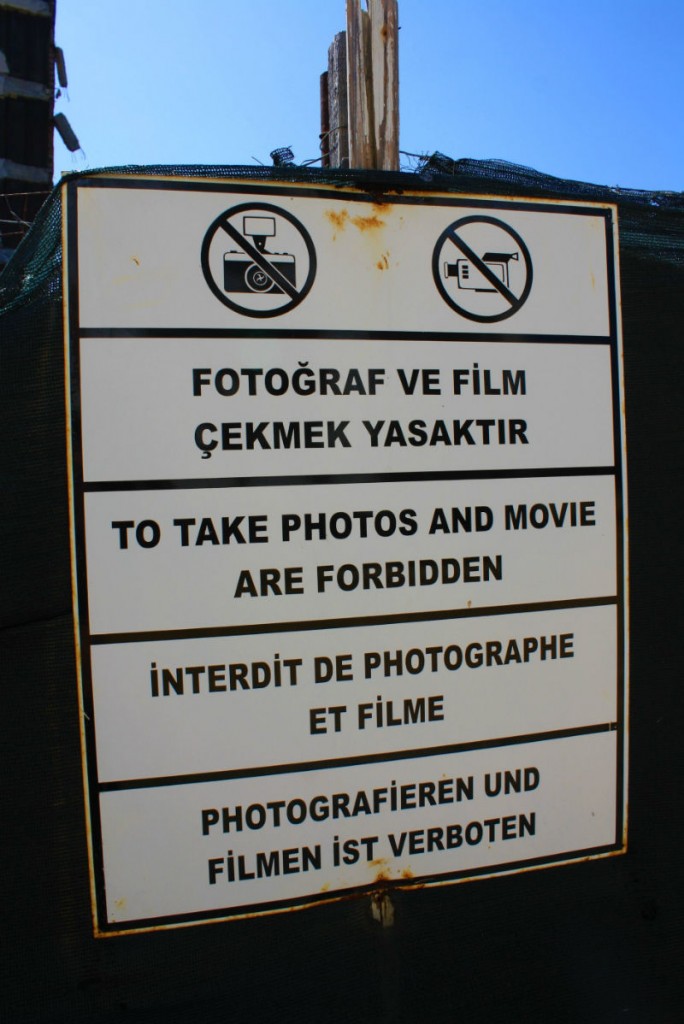 Famagusta now falls under the de facto control of the Turkish Republic of Northern Cyprus, the unrecognised government which runs the north side of Cyprus. Ever since the Turkish invasion of 1974 which divided the island, the holiday resorts have been cordoned off and left to decay by the Turkish military and the northern government. 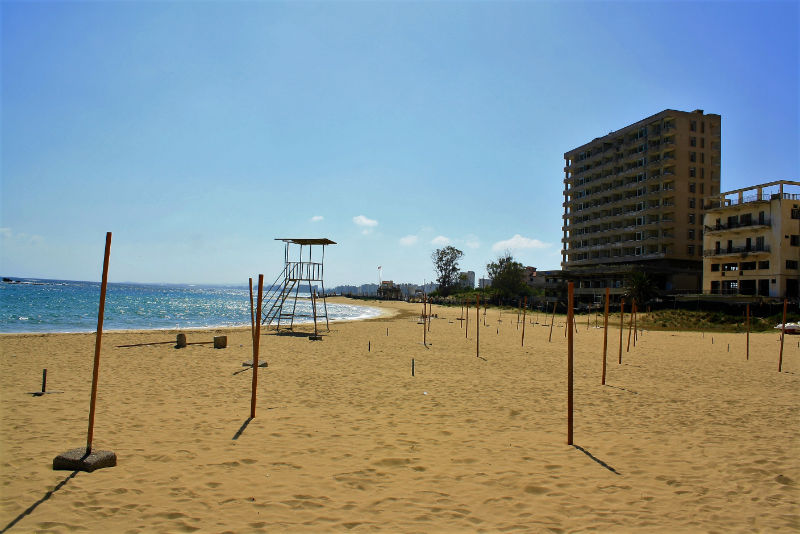 Before the invasion, the holiday resort area, or Varosha as it was known, was mostly populated and run by the Greek Cypriot community. When the invading Turks closed on the city, they fled along the coast, towards what is now the territory of the Republic of Cyprus. They have never been allowed to return. 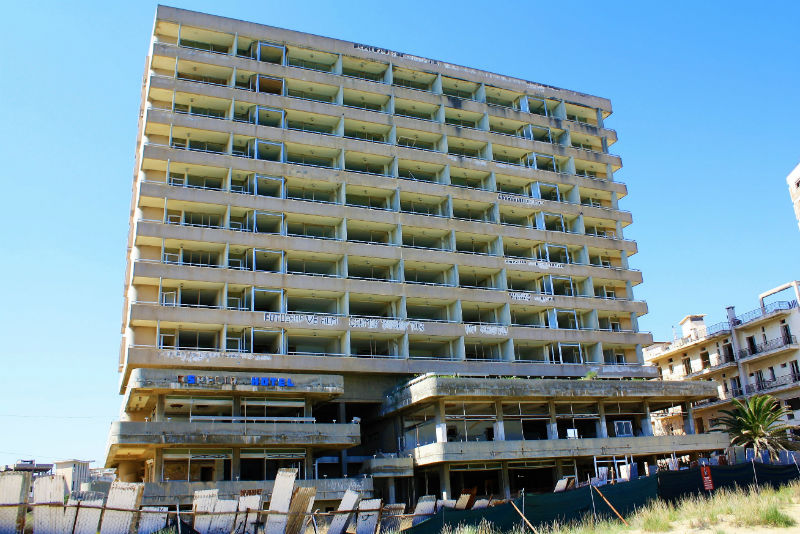 It was only in 2003 that the border restrictions between the Greek and Turkish areas were lifted. The tourists didn’t exactly flock back however. They’ve relocated to the beaches of southern Cyprus. Famugusta’s holiday resorts have mostly remained derelict and empty. The military won’t even let anyone in to explore the ruins. They are a sensitive area. Heavily secured and guarded. 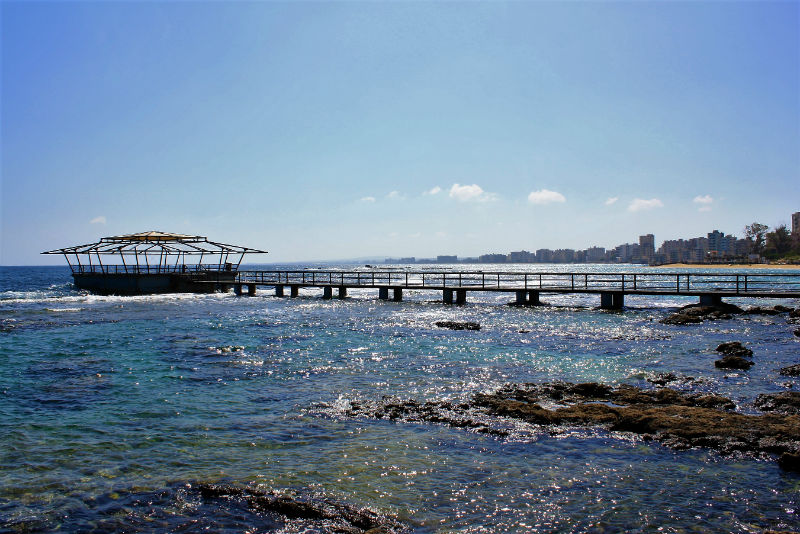 From the beach though, I can see through the barricades and screens. I can see the old hotels crumbling. Some of the ruins lie disturbingly derelict only a few metres from the few tourists sunning themselves by the new resort. 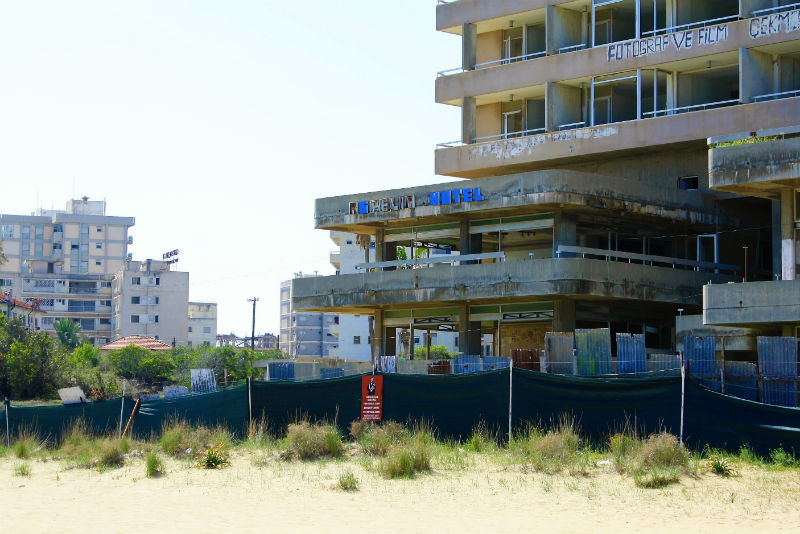 I can see the scars of war, patterned across the concrete buildings and I can see the weeds growing over old homes and businesses. 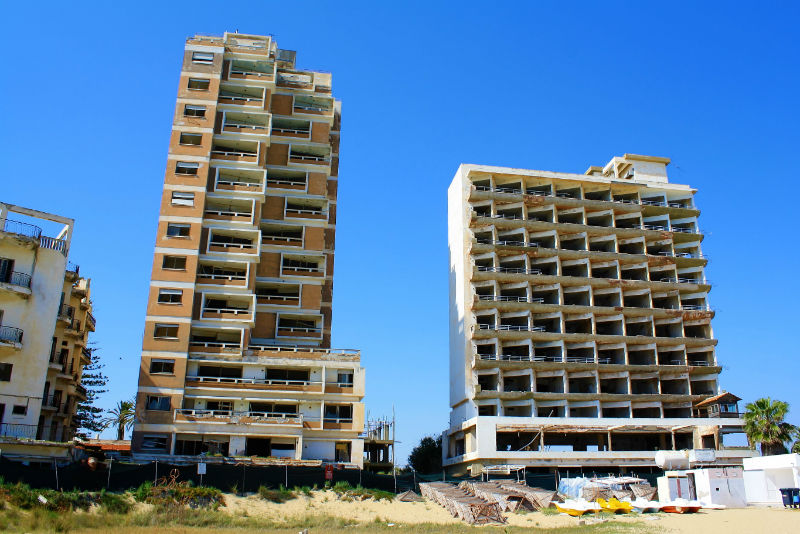 The Turkish Cypriots live in the Old Quarter of Famagusta now, and ringing the city are the ruins of the Greek areas, a strange reminder of the division that still manages to separate these two communities to this day, over 30 years on. 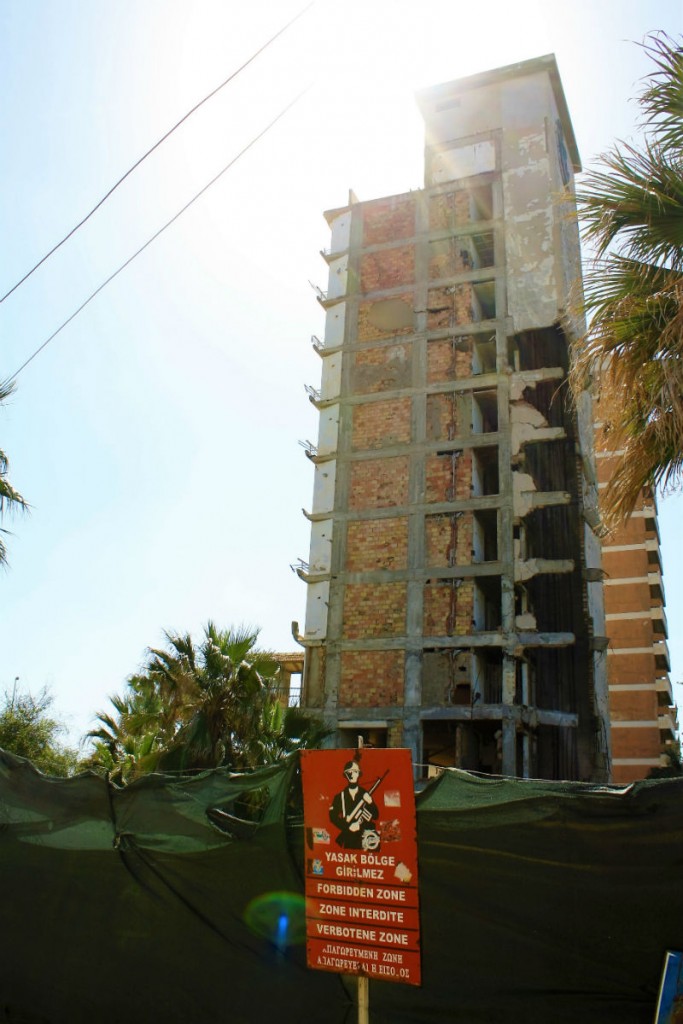 There are rumours that the old resorts might be turned back over to the Greek Cypriots, possibly to entice Cyprus to stop blocking Turkey’s entrance to the European Union. But for years, the Turkish side has kept the once busiest part of the island in a state of terrible neglect, keeping the beaches empty and the holiday makers away, to remind all Cypriots and visitors that there was a once a terrible war waged across these golden beaches, a war that irreversibly changed Cyprus for ever.

How Do I Get To The Famagusta Abandoned Holiday Resort?

The abandoned holiday resorts can only really be seen from one point, the part of the beach by the city that is still open. It’s a small stretch of sand, on the map below, by the Palm Beach Hotel. The city itself can only be reached from Northern Cyprus, not directly from the South. Be careful when taking pictures here as it is illegal, and it’s illegal to enter the ruins. There’s a very real possibility you would be fired upon by the Turkish Military.