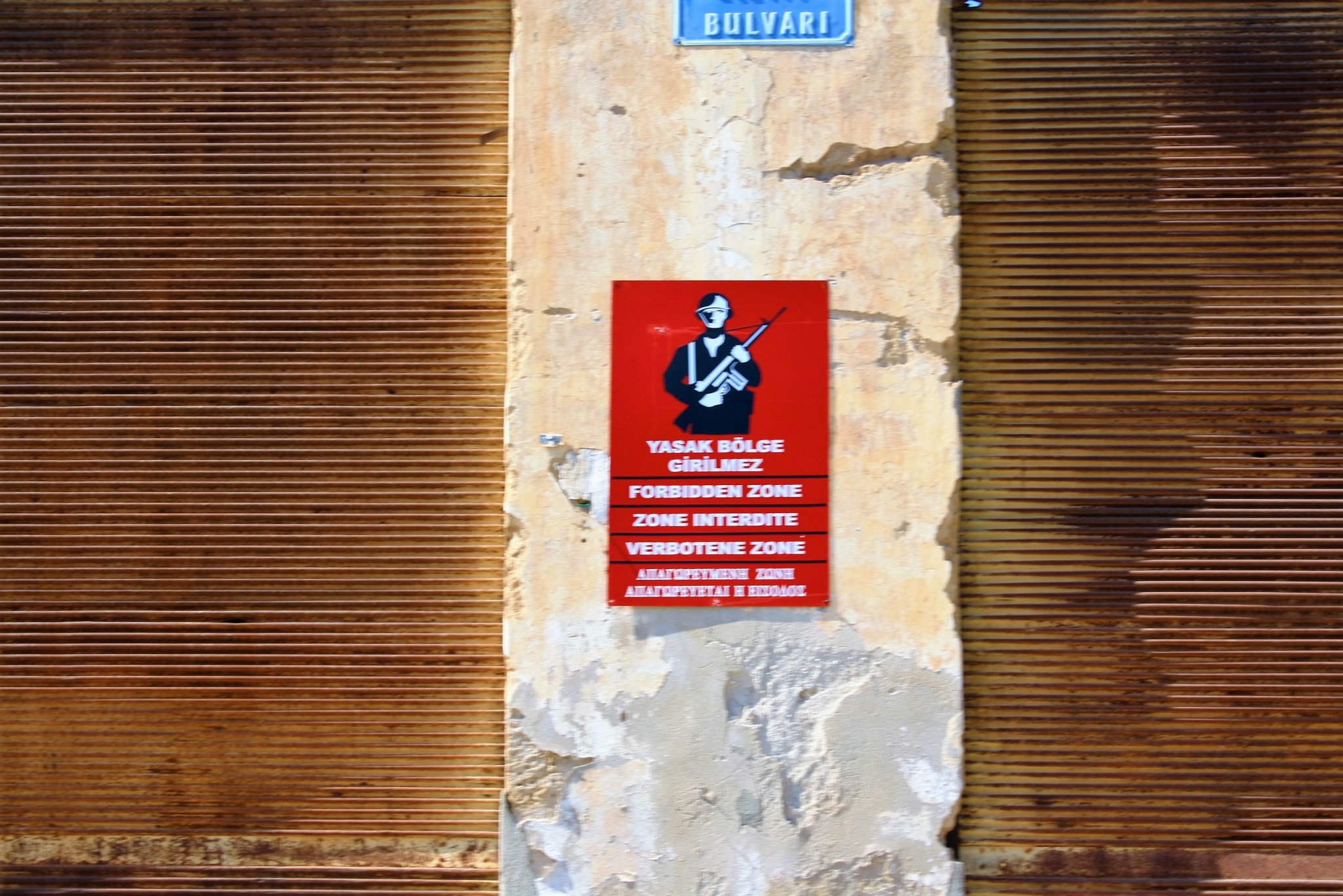 There is nothing but haunting desolation along the Cyprus buffer zone that divides the island between the Greeks and the Turks.

In 1974 the Turkish invasion of Cyprus left the island torn in two, as the Greek and the Turk communities were divided and separated. The Turkish military occupied 40 percent of the island, their goal being to keep Turkish Cypriots safe from the perceived threat of the Greek Cypriot government which had taken control. Greeks in the path of the invasion fled, heading south.

The United Nations set up a buffer zone to separate the two military forces, which ran along what was known as the green line, a divide which had previously been set up by the British colonial administration to stop inter-communal violence in the 1960’s before Cyprus was granted independence. Green was the colour of the pen used by the British Commander to draw that line across the map. The Turkish military had advanced as far as this line during their invasion, and this became the separation line. 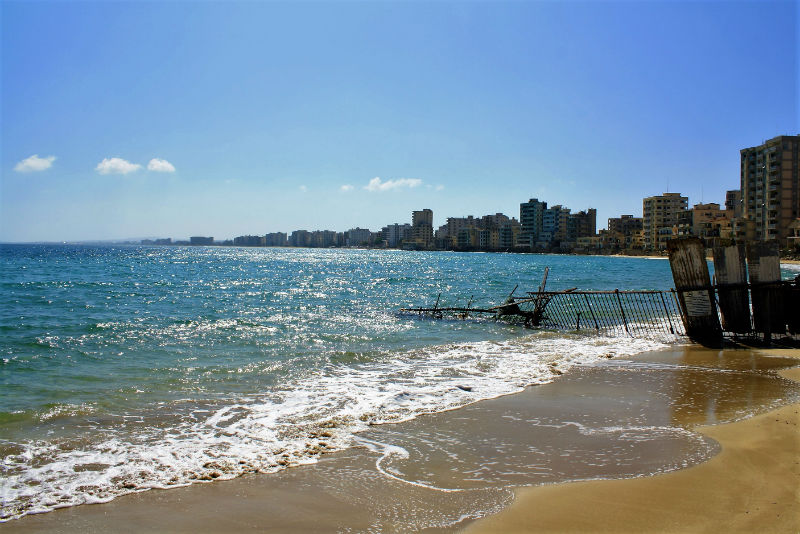 The security zone was established to stop further violence and a peacekeeping force has patrolled the land ever since to stop any clashes and further fighting.

The divide still separates the north from the south, and runs for 112 miles across the island. It even cuts straight through the middle of the capital city, Nicosia. In the south, the Republic of Cyprus is the internationally recognised state, and they see the north as being under the military occupation of Turkey. In the north though, a de facto government, the Turkish Republic of Northern Cyprus, declared itself as an independent nation, but the only country to acknowledge that is Turkey.

Things have calmed down a lot since the war. The borders were even reopened in 2003, allowing access for locals and travellers between the two states.

I decided to see this buffer zone for myself, so I travelled along it where I could. I saw a heavily militarised line of desolation that runs through Cyprus, an enduring legacy of the war that shook the island. 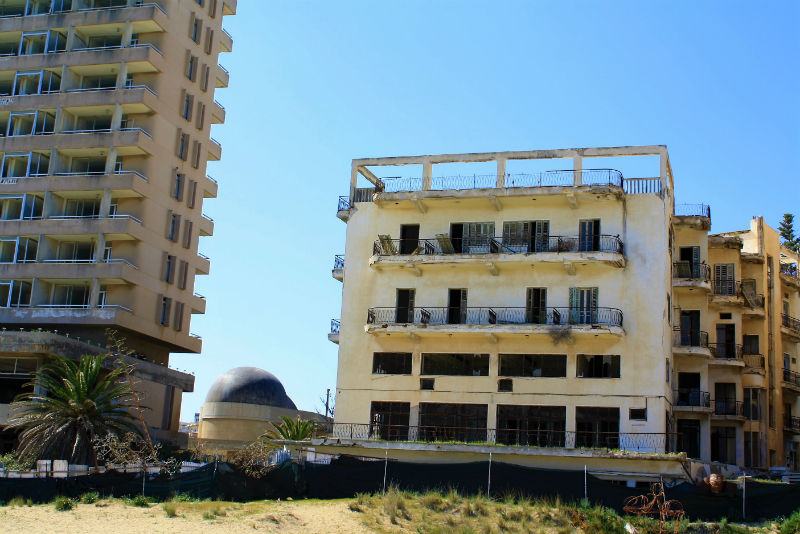 I started in the east, in the city of Famagusta. This was once a thriving beach resort, but by the white sandy beaches I found the haunting remains of Varosha. Thousands of Greeks fled the city when the Turkish army advanced, leaving behind their homes and businesses. The Turkish army then closed off an enormous section of the city that lies along the Cyprus buffer zone. Over the years, the holiday resorts and hotels have decayed, fallen down, and become wildly overgrown. Next to these war torn remains, along one of the nicest beaches on the island, tourists still bathe in the waters and drink beer on the sands. 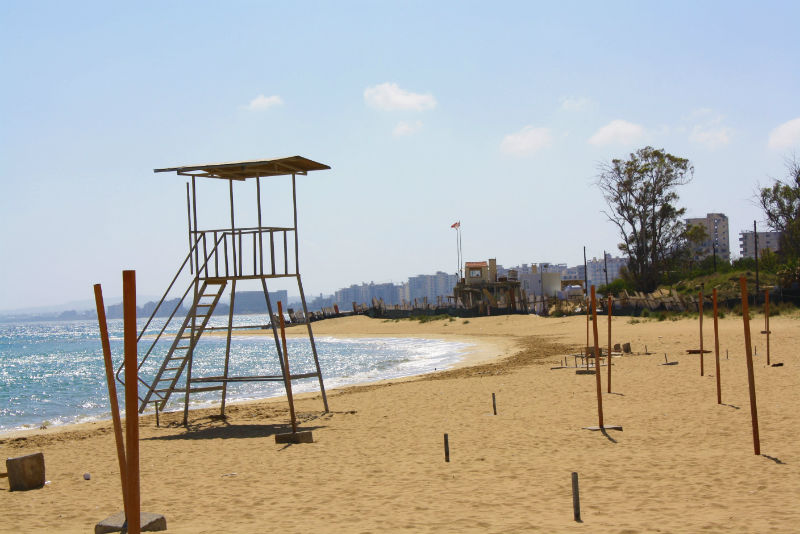 I followed the road away from the coast. The barricades and barbed wire extend into Famagusta itself, creating an impenetrable barrier that has completely isolated the old Greek settlement from the public. 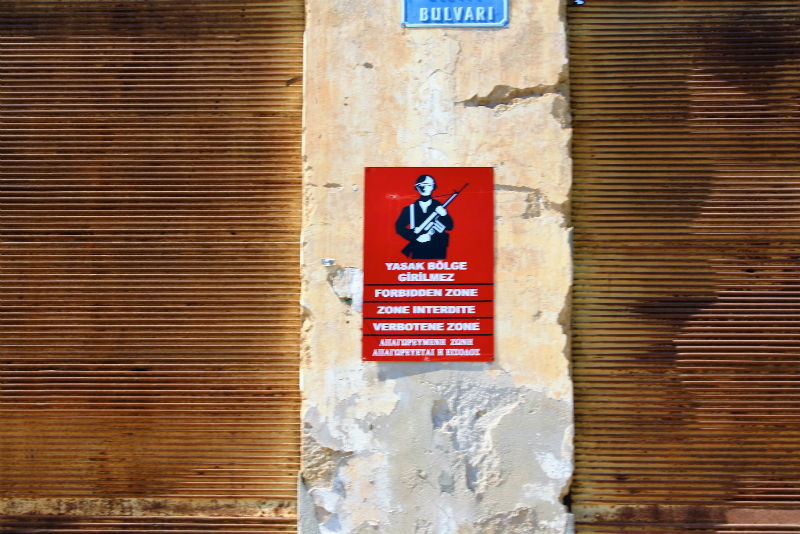 After Famagusta, I headed west into the interior of Cyprus. I took the road to Nicosia, which is the world’s last divided capital city. Here you can stroll across the border at leisure, with only brief passport checks. On one side you can eat a Turkish kebab, and on the other a Greek Gyros. 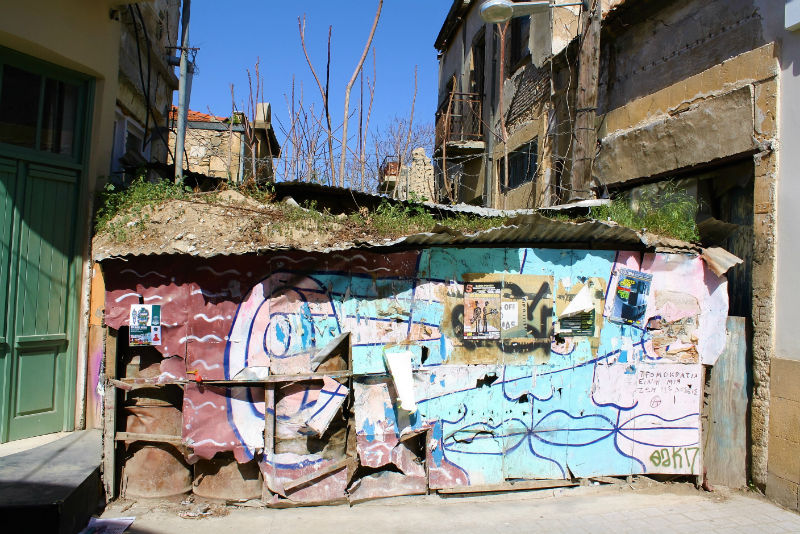 But the buffer zone still runs through here, and both sides are heavily fortified despite the relaxed border control. I could see UN troops looking out over the city from the middle of the security zone. They were relaxed, suggesting things weren’t quite so tense between both sides, but the Turkish and Greek soldiers on either side of the buffer zone were still on rigid lookout duty. 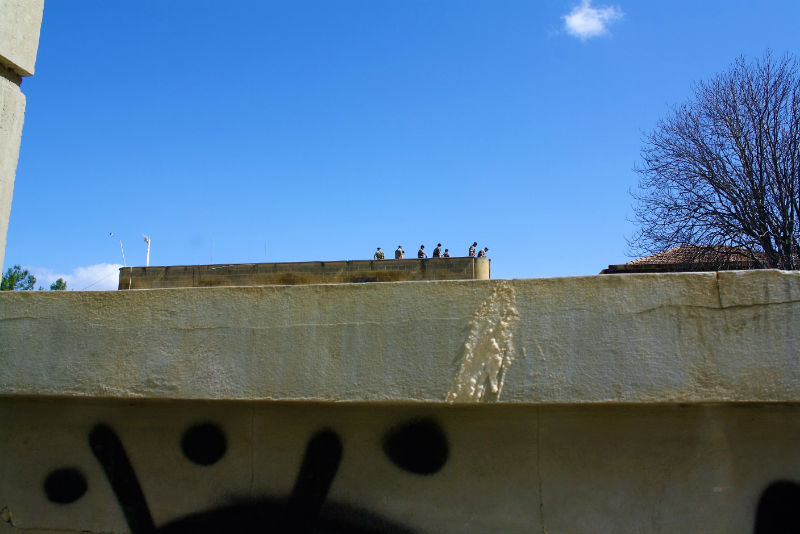 The capital is an incredible place to witness the sudden change in culture, language, currency and religion that comes from simply strolling across the border. No where else on Cyprus can you really see the contrasts and the similarities  caused by the long divide of these two nations in such sudden detail. 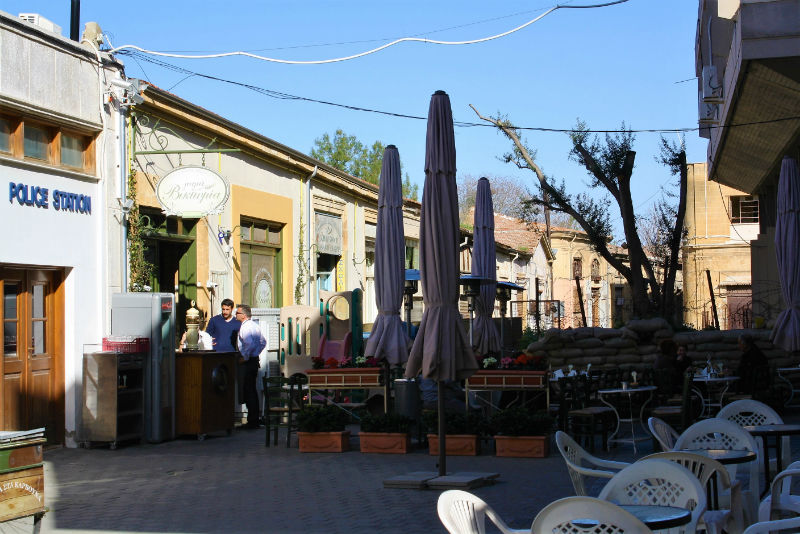 I then went towards the western coast of Cyprus.

By the Mediterranean Sea, in the small town of Denizli, I found a war memorial to Turkish parachute regiments who fought in the war. 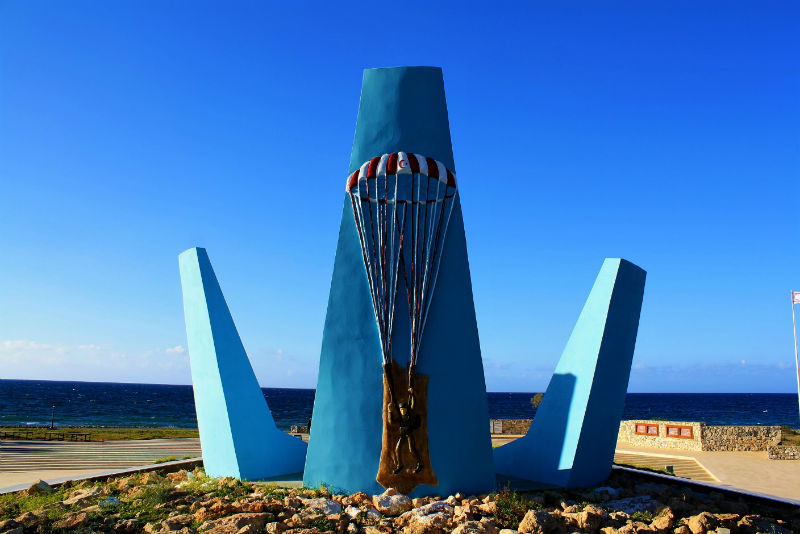 There were old bunkers, now sealed up, and unused, facing out towards sea. 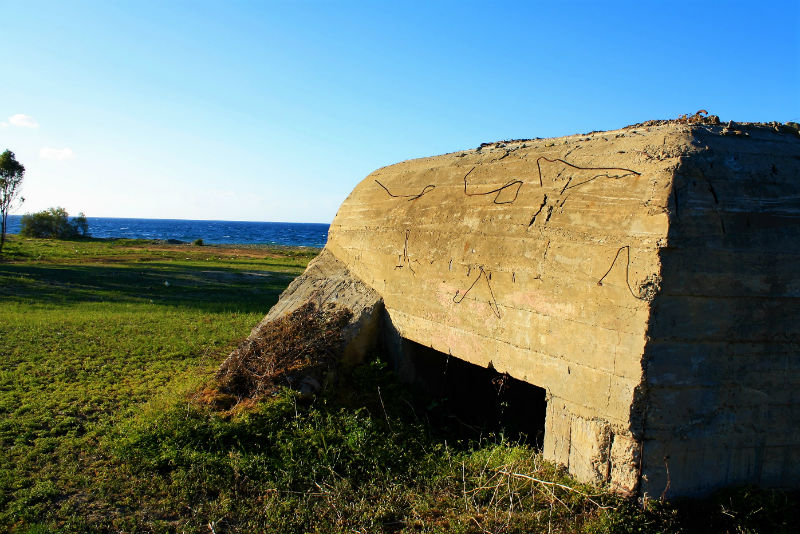 I drove along the coast, towards the buffer zone, and then up into the mountains, where I found communities still living their lives right up to the border. Military signs and the odd guard post warned that the buffer zone was close, and the odd abandoned building showed that perhaps from here, people had fled, never to return. 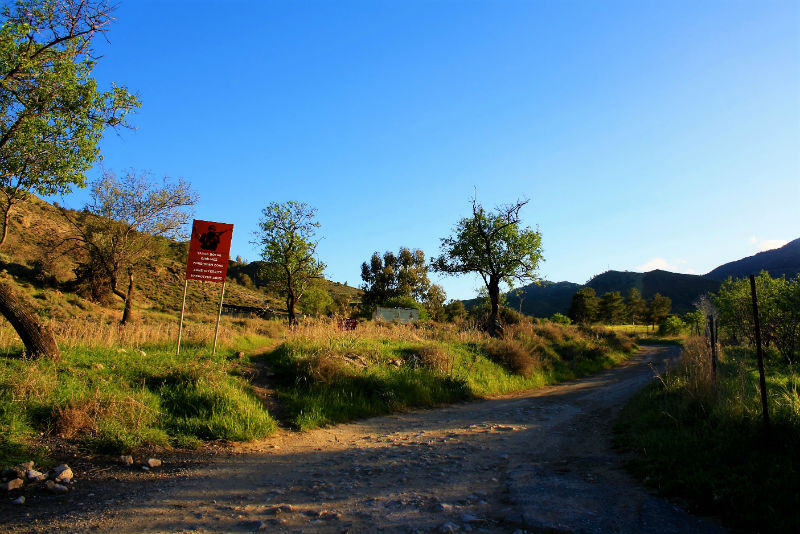 Further along, a few miles away from the coast again and near the town of Yesilirmak, I found another military exclusion zone. 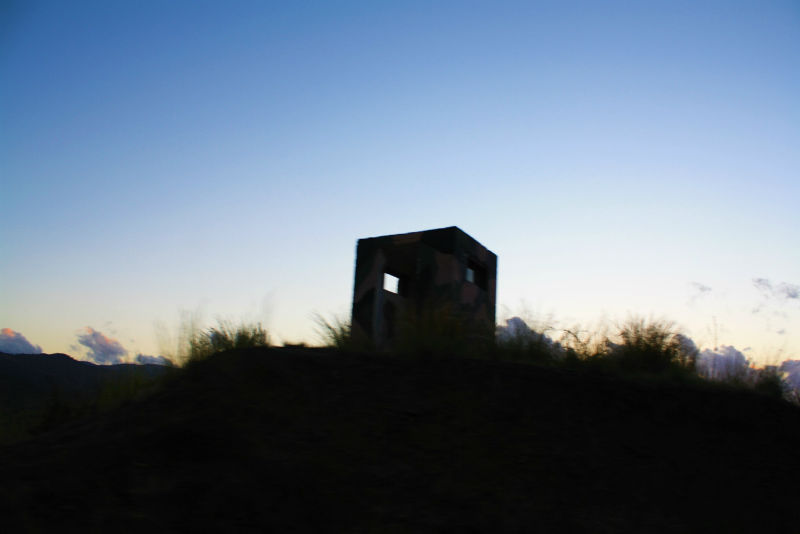 This was an old village, war torn, derelict and abandoned.

The war took its toll here, and the haunting ruins have never been reclaimed, simply fenced off by the military and left to rot. This was the starkest reminder, these abandoned homes, that the war divided, and continues to divide the people of Cyprus. 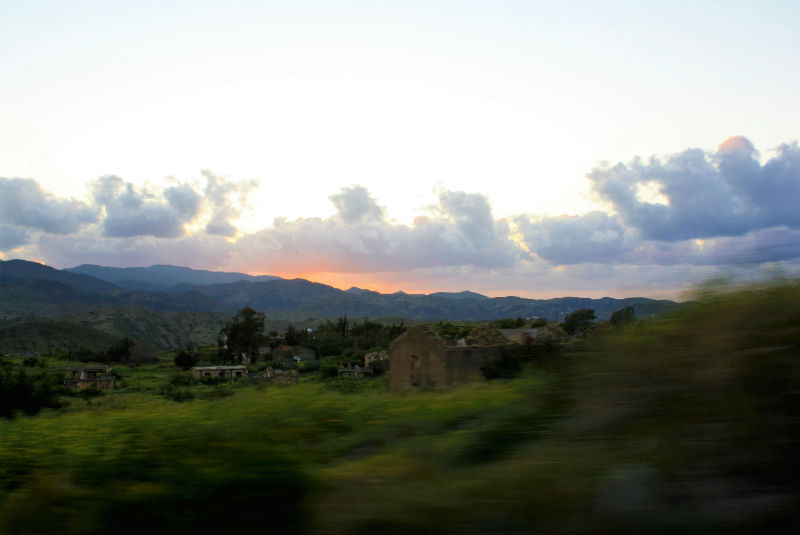 Along the buffer zone, I found communities which had been separated, literally divided in two by an almost arbitrary line which dictated where they could live and travel. Rather than being able to travel across the entirety of a single island, I had to follow the buffer zone instead, one side always out of reach.

The buffer zone may be a quieter affair now, and the border openings offer a huge glimmer of hope, but it may still be a long time before the two sides it separates manage to achieve a lasting peace and compromise that all can agree on. And until then, the unlucky villages, businesses, hotels and even airports which were caught in the middle by the green line, will continue to decay away, while at the same time the unlucky families and communities caught up in it all, will not be able to return to their homes.

Nicosia International Airport fell into the confines of the buffer zone too. I couldn’t find a way to visit, but I did find these incredible pictures from someone who did! Click HERE!