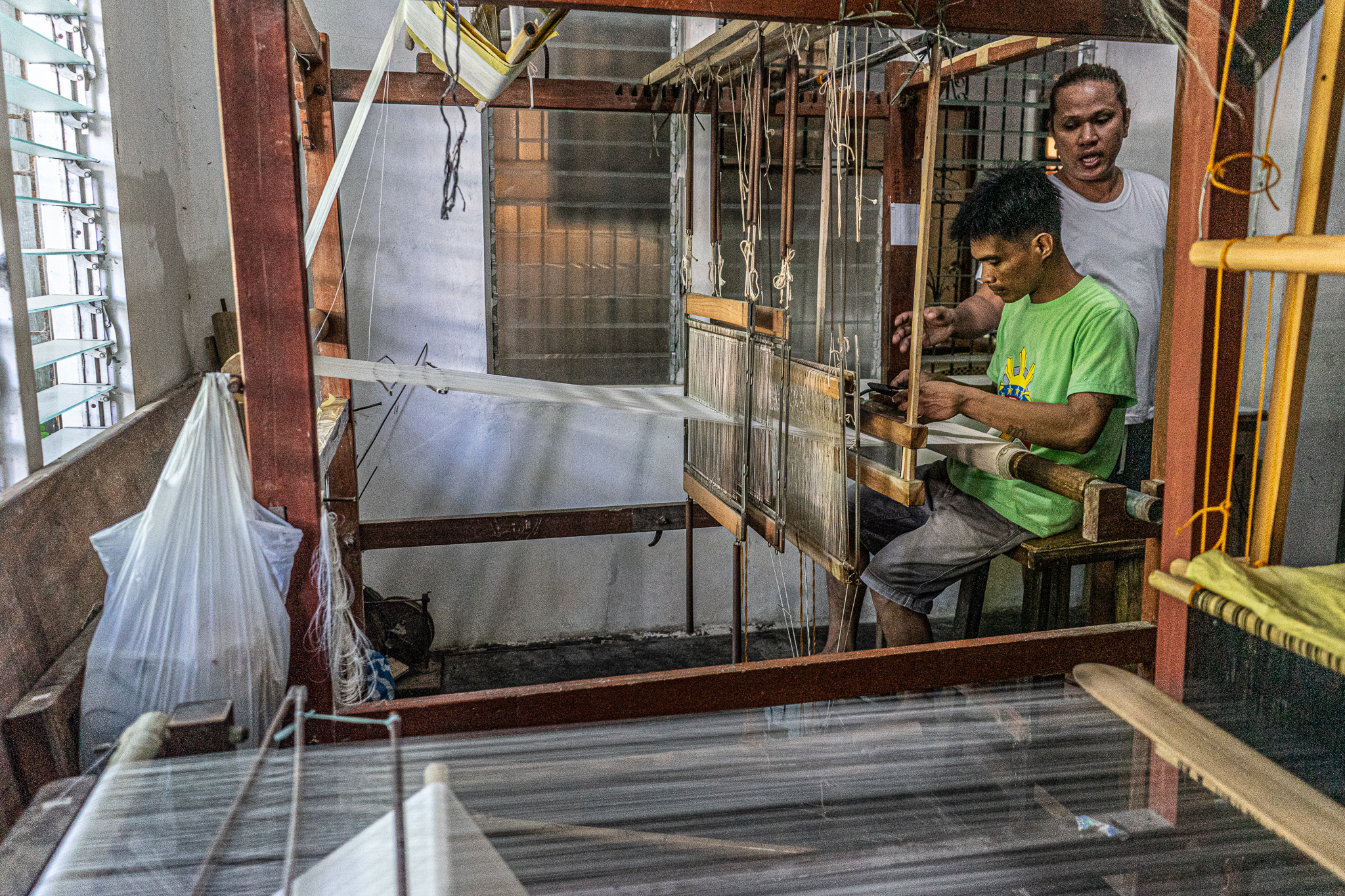 In the Philippines, ingenious weavers turn the leaves of a wild pineapple into high-end, fashionable clothing. I visited Aklan province on the island of Panay to find out how.

“This is the red pineapple”, Phats de la Cruz Tambong explains as he pulls long, green leaves from the ground in front of us.

“It’s a wild pineapple”, he adds. “It’s not a pineapple that you want to be eating”.

In fact, the only thing that I had ever associated pineapples with, was eating. Or, perhaps, drinking pineapple juice, or mixing up pineapple smoothies or cocktails.

This pineapple though, or the leaves at least, was destined to be spun into a tough, natural fibre, and then woven into elegant Filipino clothing. And Phats was about to give me a crash course in the art of Pina weaving.

A History of Ingenuity

Phats isn’t a farmer. But he does know a lot about pineapples. He needs to, because he’s the head fashion designer of La Herminia Pina Weaving Industry, a company based in Kalibo, on the Filipino island of Panay that specialises in turning pineapples into clothing.

Weaving has a long history in the Philippines, and Filipinos have a long history of being ingeniously resourceful. I’ve seen vegetables turned into hats, leftover pork heads led to the creation of the country’s unofficial favourite dish in Pampanga, while old US Army Jeeps evolved into the iconic mode of transport that is the Jeepney.

It’s no wonder then, that when the Spanish introduced the almost inedible fruit that is the Red Pineapple to the Philippines that it quickly sparked the creation of an industry that has lasted over 200 years.

Because what else is there to do with wild red pineapples except to turn them into fashionable clothing?

The Wild Red Pineapple has bright red skin, and tough, fibrous leaves. It grows well in the tropical climate. The Spanish might have introduced the Pineapple for eating, but Phats says that it’s quite an acquired taste. Not like your standard pineapple. The Red Pineapple didn’t take off as a culinary staple in the world of Filipino food, but due to the strength and durability of the leaves, it did find another inventive purpose.

While the Pineapple was introduced, weaving was not something that was introduced by the Spanish. This is a craft that the Filipinos across the archipelago have honed for centuries, and all it took to create the new industry of Pina weaving was the application of age-old skills to a new resource.

Outside the workshops of La Herminia Weaving Industry, Phats is explaining the history of the Wild Red Pineapple, while his colleague begins to cut leaves from a fruit in the ground.

Most of the pineapples are grown in larger fields in the countryside of Aklan, but they keep a small patch here in the garden for demonstrations, because the fields are around a six-hour drive away.

“First, they remove the leaves”, Phats diligently explains. “Then a piece of broken porcelain is used to scrape the fibres off”.

The porcelain is a traditional element of the process, and the jagged make-shift implement helps to separate the different fibres

“There are two types of fibre”, Phats explains. “Bastos and Liniwan. The Bastos fibre comes off first and is cheaper. The Liniwan is rarer and becomes much more expensive”.

Which of the two fibres is used will ultimately determine the quality and then the price of the clothes that are woven later. But before that can happen, the fibres are washed to remove the green colour of the Pineapple leaves, before being dried out in the sun. Once they are suitably dry, the fibres are knotted together end to end to create a large bundle that’s ready for weaving.

The intensity of the work is clear already because it takes around 100 pineapple leaves just for the small bundle I can see being knotted together.

“It can take months just to get the bundles of fibre together”, says Phats. “This small one is just 32 grams, but we need 64 grams to make 3.6 metres of Pina cloth. That’s why it’s so expensive”.

At La Herminia Weaving Industry, they’ve been crafting clothing from Pineapples since 1996, when they began to revive a dying industry. “Aklan Pina has always been known as the strongest, but we are one of the few places still weaving”, Phats laments as he takes me to meet the weavers.

The Art of Pina Weaving

Inside, the weavers are sitting at their stations weaving lengths of fibres into strips of fabric. The 3.6 metre length of Pina that Phats mentioned, that alone can take 5 weeks to spin, and it’s a long and tedious job that takes skill and patience.

“If you have heart and patience, then you can weave”, says Phats. “it’s not easy, it takes a long time to learn. That’s why most of the weavers are women!”

Making clothes from pineapples is no easy task, and the weavers slave away for hours at a time to produce the Pina cloth.

But most of the weavers are from the older generation, with a few rare exceptions.

“One of the problems we encounter is that the younger generation don’t want to learn. They don’t have the patience. They want the product, but they don’t want to make it”, explains Phats.

How to Make Clothes From Pineapples

Once the weavers have supplied the Pina cloth, Phats can begin his real work. As a fashion designer, it’s his job to actually turn the finished cloth into clothing.

He shows me the collection of Pina clothes and demonstrates their durability by bringing out a shirt that’s believed to be 110 years old.

His work has featured in fashion shows, and Phats remarks that “they call Pina the Prada of the Philippines”.

The famed Filipino President helped to popularise the Pina during her term in the 1980s and led to a resurgence in Pina. But even as Phats tried to market more day to day Pina ware, promoting the sustainability of the product and its heritage, he still realises that the future of Pina can only be secured if more of the locals take an interest in how to weave. Ultimately the respect and the demand for Pina doesn’t matter, not if there’s no one to carry on the traditions.