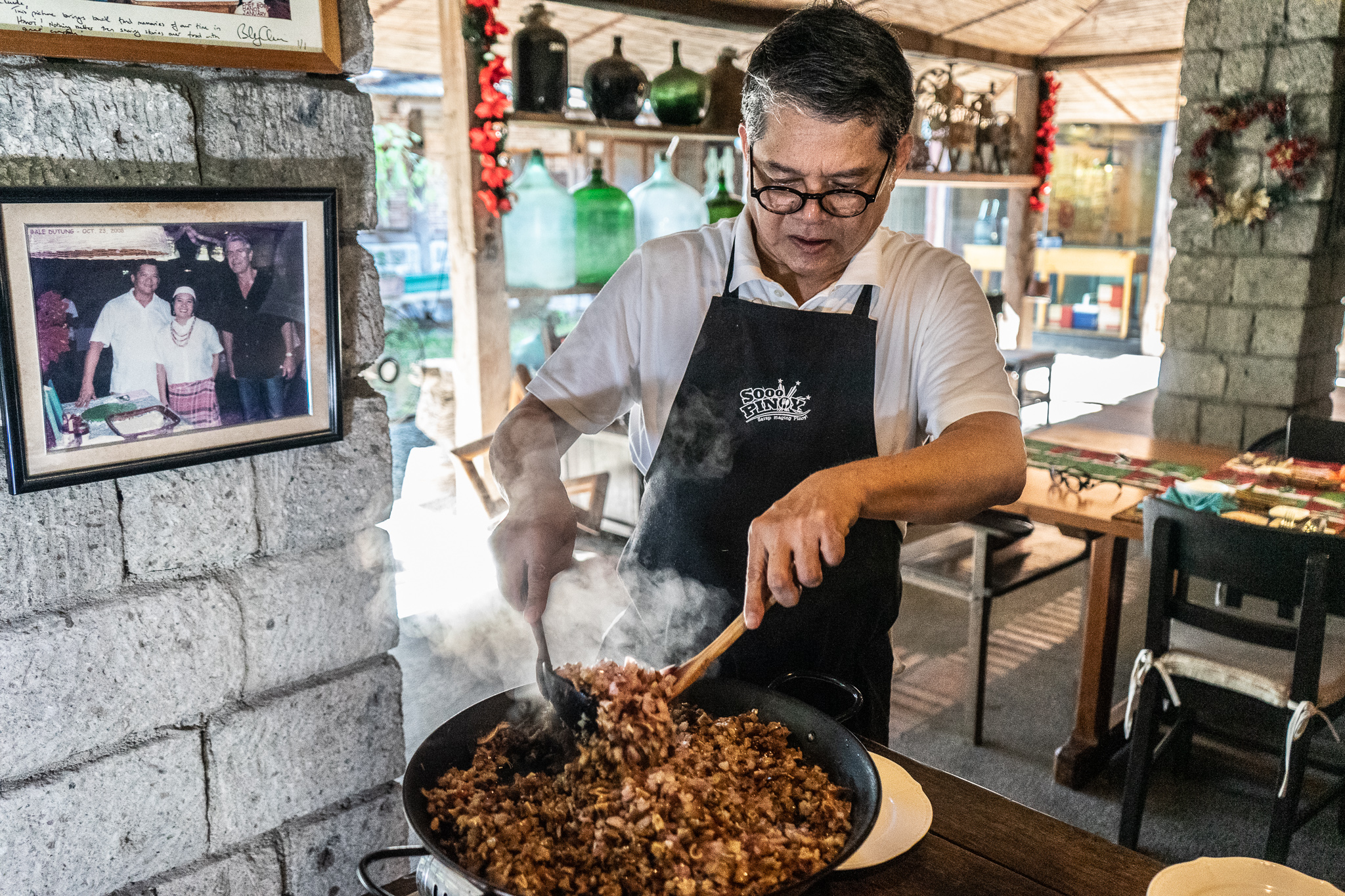 The Philippines is well known for its weird and at times, admittedly whacky food – Balut, anyone? – but the country isn’t exactly known as a top foodie destination when it comes to travelling around Southeast Asia.

One province could be set to change that reputation though, because Pampanga, the culinary heart of the Philippines, has some delectable cuisine to gorge on.

Found just north of Manila, the province has long been known by Filipinos to serve up some of the best food in the country. This is the birthplace of Sisig, the home of San Nicolas Cookies, and you can even find a half-decent Lechon, even if we are a long way from Cebu.

Centred around Angeles City, San Fernando and Mexico (no, not the country), Kapampangan cuisine is delicious and rich in history, stories and flavours. If there’s one province in the Philippines that can turn around the negative opinion of Filipino food that’s so prevalent amongst travellers, then it’s going to be Pampanga.

Oh, but of course, this is the Philippines. And that means, that yes, there is always going to be something on the menu that to a foreigner like myself, just seems strange and bizarre. At the end of the day though, it’s the frogs and the grilled pig faces that make this such an exciting culinary destination, and just another reason why things really are more interesting, and – as the tourism board likes to remind everyone – more fun in the Philippines!

To inspire your adventure into the culinary heart of the Philippines, here are the best things to eat in Pampanga!

It’s impossible to talk about Pampanga without talking about Sisig. That’s because this sizzling plate of grilled pig face can trace its origins back to this province, and Angeles City is often seen to be the birthplace of a dish that has taken the Filipino culinary world by storm.

Walk into any pub, bar or restaurant in the Philippines and you’ll be met with a cloud of smoke and haze as the waiters rush out sizzling hot plates loaded with Sisig. You take all the best (or maybe, the worst?) parts of the pig. That’s the face, the tongue, the ears and whatever other gnarly parts you can get your hands on. Grill it, fry it, and serve it sizzling and hot, with garlic, onions, chilli, and any other ingredients that might take your fancy.

In Manila, Sisig is served with an egg, in Legazpi in Bicol, you’ll probably find it covered in Mayonnaise.

Traditional Kapampangan foodies won’t have any of that though, and often you’ll find it served more simply here, and perhaps not even sizzling at all.

It’s a remarkably simple, yet potentially creative dish, and you can try the most authentic versions of Sisig all over Pampanga.

I tried the Sisig at a few joints in Angeles. The original version is always said to be from Aling Lucing’s, however, the idea of Sisig as a cooking technique date’s back to the Spanish colonial era. My personal favourite was the non-sizzling variety that I gorged on at the Annie Bea Eatery.

There’s only one place to go in Pampanga for Tokwa’t Baboy, and that’s at Mila’s in Angeles City, the restaurant that made this dish famous.

Tokwa’t Baboy was pioneered by Mila at her humble grill. It’s in many ways similar to Sisig, but also very different. Tokwa’t Baboy consists primarily of tofu, pork ears, and pork belly. The pork ears and pork belly are really where the similarity ends, although, as with Sisig and many more dishes in the Philippines, this is a dish borne of the ingenuity and resourcefulness of Filipinos – because nothing ever goes to waste here.

It’s the tofu that makes this a stand out dish, coupled with the vinegar, soy and chilli sauce broth that gives it a distinctive Filipino kick. Take out the pork and you could have a veggie winner too, although no one in the Philippines will understand why you wouldn’t want the pork!

Kapampangans really know how to cook up a good old fashioned Filipino-style Meatloaf, but here it has its own name because this often seen

as the precursor to the more prevalent Embutido that you’ll find elsewhere.

Murcon is a glorious dish that takes pork and chorizo and wraps it all up with some great fillings. It’s soft, supple, moist, and delicious, and when it’s done right it’s swimming in sauciness.

Alongside the ground pork, you can throw in herbs and spices, chilis and peppers, tomatoes and onions, but as important as the taste is, the presentation and preparation take a lot of doing to get this dish done right.

The best Morcon I tried in Pampanga was at Everybody’s Cafe in Angeles City.

I’m a big fan of noodles, and I was in luck when I was taken to Susie’s, an Angeles favourite that’s been serving up cheap, cheerful and delicious local food for years.

Here, I was introduced to the wonders of Pancit Palabok, a noodle dish that for me ticks all the necessary taste and texture boxes.

Take a heap of noodles, add in pork – what else in the Philippines? – garlic boiled eggs and other ingredients, and top it off with the all important shrimp sauce.

The shrimp sauce has to be thick and creamy, and then before eating, you have to thoroughly mix the Palabok together with the noodles to get an even flavour throughout, otherwise it’s just not worth it.

A local, healthy alternative to all that pork meat is the Fiddlehead Fern Salad or Ensaladang Pako. Ferns grow freely in Pampanga, and oftentimes I was told that the person cooking dinner would simply go out into the garden, pick a few ferns and prepare a salad.

The Pako is simply collected and washed, and then salted eggs, onions and tomatoes are added into the mix, to make a delicious salad to counter all that meat you’ll otherwise be eating in Pampanga.

Like I said, there was always going to be a few niche foods thrown into this article, and one of the more unusual offerings in Pampanga is Wild Frogs.

Known by the local name of Betute Tugak, these Wild Frogs are stuffed and then deep-fried.

This dish has a unique tale behind it too, that once again demonstrates the resourcefulness of Filipinos. Living in the shadow of Mount Pinatubo, the region has often been at the mercy of this highly active volcano. Often, after eruptions, the only thing left to eat would be the Wild Frogs.

You can try this at several restaurants, but as with many local dishes, Everybody’s Cafe serves up some great stuffed frogs.

The food in Pampanga has a lot of history behind it, and that’s what makes this such a fantastic foodie destination. Or, that’s if you’re into history like I am anyway. I previously wrote an article for Gastro Obscura that went into great depth on the Spanish colonial practise of using egg whites as an emulsifier in local churches.

What has this got to do with food?

Well, all those leftover egg yolks that weren’t needed, they weren’t just thrown away. Instead, resourceful Filipino cooks began using them to make egg yolk heavy desserts such as Leche Flan, and famously, San Nicolas Cookies.

These rich, egg yolk heavy cookies are famous in Pampanga and have been made even more iconic by legendary local chef and historian Atching Lillian, who showed me how to make them at her home and restaurant near Mexico.

They are usually brought out for special occasions and religious festivals, but head over to Atching’s place and you can buy them anytime.

Okay, so Lechon can’t really be called a classic Kapampangan dish, and I’m not going to make that claim. It is a classic Filipino dish, and a dish that Anthony Bourdain famously called the best pig he ever ate. Often considered to originate in Cebu, many other islands also claim the Lechon crown, and you could argue for years over who actually has the best Lechon.

The concept again is simple. Take a suckling pig, stuff it with herbs, and then slow roast it for hours. It’s simple, but it requires timing, patience, and expert knowledge of the spices and herbs needed to flavour it and to get the skin crunchy enough to crackle.

I’ve tried a lot of Lechon in the Philippines, and one of the best pigs I ever tasted was in Pampanga. But this was no ordinary restaurant, this was Bale Dutung, the renowned restaurant of celebrity Chef Claude Tayag, the man who introduced Anthony Bourdain himself to many classic Filipino dishes.

The slow roasted Lechon was cooked to perfection, but rather than simply serving it up with some vinegar, he turned into a ten course tasting menu. There was classic Lechon (served with vinegar and liver sauce), there was non-sizzling Sisig grilled from the pig’s head, there was Lechon Asado in a tomato sauce, there was pulled pork, and there was even a Lechin based Sinigang Soup. It was a literal Lechon fiesta, and I never knew that so much could be done with so little Lechon.

Chef Claude’s restaurant is in Angeles City, and it’s truly an eating experience like no other in Pampanga.

These are just a few of the highlights, and Pampanga is a grand foodie destination because there’s so much more to try on top of this. You can dine on sweet and sour Carabao meat, gorge on crickets or snakes, or delve into endless noodle goodness across the province.