From Phoenicians to Picasso: How to explore the best of Malaga’s history 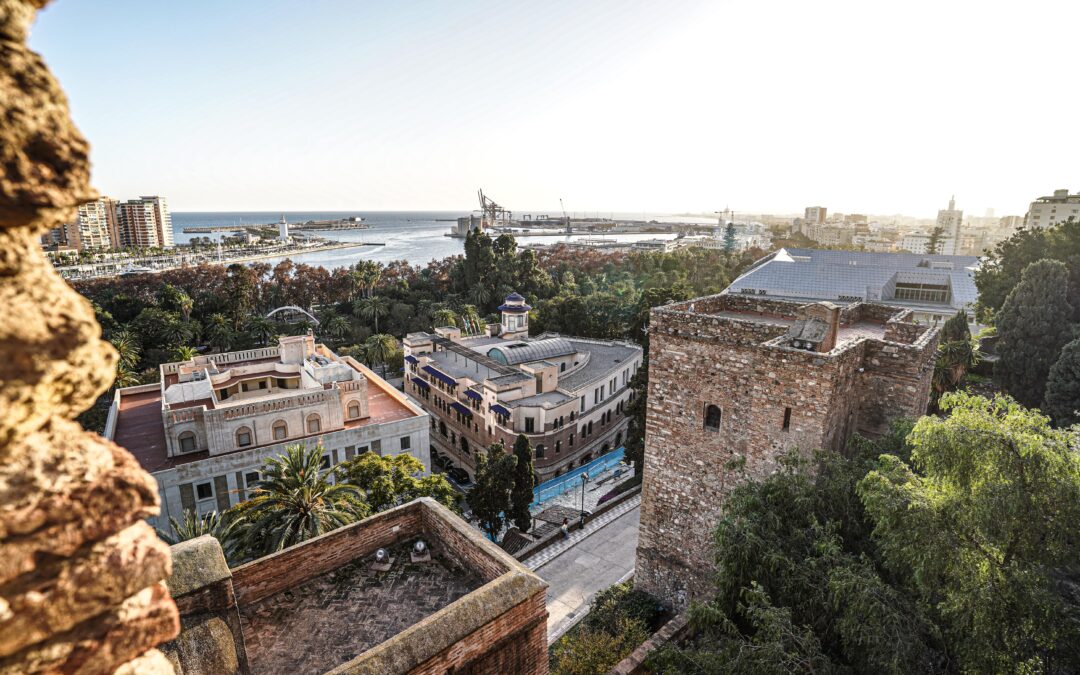 In Malaga, thousands of years of Mediterranean history collide in Costa del Sol’s most underrated city break destination. From fermented Phoenician fish sauce (Garum, anyone?) to Moorish castles and Picasso paintings, here’s how to explore Malaga’s history on a weekend getaway.

Disclaimer: This story is brought to you with the help of Jet2holidays. I travelled to Malaga on one of their city breaks from East Midlands Airport. However, all views expressed in the article below are my own.

‘Malaga, the martini of the sea.’

The plane dropped low over the Montes de Malaga. Out of the window, I could see the startlingly white-washed mountain villages of Andalusia dazzling in the winter sunshine. A moment later, the mountains were gone, replaced by the dark blue of the Mediterranean Sea as the plane circled around to begin its descent into Malaga’s airport.

Founded by Phoenician seafarers in 770 BC, the history of Malaga stretches back almost 3000 years. Conquered by the Romans, Visigoths, Moors and Christians, Malaga’s history is as bountiful as the best tapas, vino and cervezas you’ll find along the Costa del Sol.

Too often seen solely as the gateway to the Costa del Sol’s resorts and beaches, I was here instead to explore the history of Malaga on a weekend winter getaway. From the remnants left behind by Phoenician traders of old, to the somewhat famous paintings of an artist named Picasso, I was excited to see what was in store as the plane touched down in Malaga.

Malaga’s history begins with the Phoenicians

“We have to look east to learn about the history of Malaga. It begins in what’s now Lebanon, in the ancient Phoenician cities of Byblos, Sidon and Tyre.”

It was a toasty 21 degrees celsius when I stepped off the plane, ready to begin my Jet2holidays winter sun getaway in Malaga. The ‘Costa del Sol Airport’ is one I’ve been to a hundred times before, given the countless family holidays I’d spent each and every summer in Marbella, further along the coast.

But somehow, I’d never really made it into Malaga. I’d always viewed the city as just a transit hub, but in the process, I’d been ignoring thousands of years of history and culture as I bypassed one of the world’s oldest continually inhabited cities.

Malaga’s history begins with the Phoenicians. “We have to look east to learn about the history of Malaga,” I’m told by Onat Piran, a local walking tour guide who showed me around the city. “It begins in what’s now Lebanon, in the ancient Phoenician cities of Byblos, Sidon and Tyre.”

The Phonecians were a seafaring people who established colonies all over the Mediterranean world. They even gave us the world’s first ‘phonetic alphabet’, an alphabet which the Roman alphabet we use today is based on. The Phoenicians arrived in southern Spain in 770 BC, and they established a trading post on the mouth of the River Guadalmedina that they named ‘Malake’.

“But it doesn’t always look that old,” he added with a laugh as he gestured around the shops and cafes of the Plaza de la Constitución, Malaga’s main square. “Look – you have Starbucks, the United Colours of Benetton and Victoria’s Secrets!”

The Garum Factory and Roman Amphitheatre

The Phoenicians were famed for their love of Garum, a peculiar type of fermented fish sauce that featured heavily in their cuisine. The exact recipe for Garum has been lost to time, but it was likely similar to other fermented sauces like Soy Sauce that exist today.

Malaga’s coastal location provided the perfect conditions and ingredients for the production of Garum, which was likely one of the major reasons why the Phoenicians settled here. Archaeological excavations have even unearthed the remains of a major Garum Factory in Malaga, right next to the ruins of the city’s Roman Amphitheatre. There’s no doubt the Phoenicians prepared fish sauce here, and their recipes were adopted by the later Carthaginians, and then Romans, who conquered Malaga during the Punic Wars of the 2nd century BC.

“Look beneath that glass pyramid and you’ll see where the Romans made Garum, the fish they loved,” explained Maria, another local tour guide who explained how the sauce was prepared using sardines, anchovies and salt crushed together by foot in the ‘factory’ I could see below. “Imagine the smell of the fish here! It would have been strong. But the Romans thought their fish sauce was delicious!”

The Romans stayed for several centuries in Malaga, and they built the Roman Amphitheatre which is next to the Garum Factory. They left a lasting impact on Spanish history and culture which is still felt today (the Spanish language is derived from Latin) but few remnants of the Roman Empire survived in Malaga. Indeed, the Roman ruins were only discovered by accident in 1951, when building work uncovered the theatre by the Alcazaba.

The Alcazaba and the arrival of the Moors

The Roman Amphitheatre sits in the shadow of Malaga’s most famous attraction: the Alcazaba. This mighty fortress sits atop a hill overlooking Malaga’s Old Town, in an area that once stood next to the sea (before the land was reclaimed).

The Alcazaba is a lasting tribute to the architecture, culture and power of the Moors, who arrived in Spain in the year 711 AD and conquered much of the country from the Visigothic and Byzantine kingdoms that arose after the fall of the Roman Empire. Malaga swiftly fell to the invaders, and it was soon incorporated into the Muslim kingdom of Al-Andalus.

The Moorish era would last for a staggering eight centuries, and the legacy of Al-Andalus is still remarkably prevalent to this day. While much of Europe was still in the depths of the Dark Ages, everything from trade and culture to art and architecture flourished under Muslim rule.

The Alcazaba of Malaga (Alcazaba means ‘citadel’) was constructed in the 11th century AD on the Gibralfaro, the high hilltop that had been fortified since the Phoenician era. Maria guided me through the Moorish arches that mark the entrance to the castle, and from a viewpoint on the Alcazaba’s walls, we could see across much of Malaga.

The Alcazaba was part palace and part fortress. “The palace is very Moorish in design,” explained Maria. “There’s lots of symmetry, green and white colours, and it’s very similar to the Alhambra in Granada because both palaces were built under the same Muslim dynasty.”

The palace gardens are still watered by Moorish irrigation systems that brought fresh water down from the mountains, while the palatial rooms were also connected by a passageway to another fortified castle, higher up on the Gibralfaro. Amongst the Moorish architecture, there are Roman columns and pillars, because the Moors quarried the Roman Amphitheatre when they built the Alcazaba.

But Moorish rule in Spain wasn’t to last. In the north, Christian kingdoms had held on, and they spent hundreds of years painstakingly reclaiming Spanish cities from Muslim rule. Located in the extreme south of the Muslim heartland of Al-Andalus, Malaga was one of the last cities to fall during the Reconquista.

Malaga Cathedral and the Christian Reconquista

“There were only two cities left by the end,” said Maria as she recounted the dramatic, if bloody, conquest of Malaga by the Christian armies. “It was reconquered in 1487, and then Granada was the last city to fall in 1492, the same year Columbus went to the Americas.”

The fight for Malaga was brutal, and no one was spared when the Christians took the city after weeks of siege warfare. “The surviving Muslims were given two options,” said Maria. “Convert to Christianity or get out of Spain. Or there was the third option. Death.”

The Christian reconquest was harsh, and the new rulers quickly set about removing or converting Moorish architecture. Muslim homes and businesses were destroyed or taken over by Christians, and the mosques were converted into churches.

Malaga’s impressive cathedral sits on the site of a former mosque, although there’s only a small piece of wall left near the entrance to mark the Moorish era. Unless my walking tour guide had pointed it out, I’d have never even known it was there.

Malaga Cathedral itself took almost three centuries to build. It was never technically completed either. “We call it the one-armed lady,” Piran had told me earlier. “Because it’s still missing a tower that was never built.”

From 1487 onwards, Malaga became an integral part of Spain. Piran’s walking tour took me through the Old Town, where 16th-century streets were still trodden daily. The mosques were gone, and churches rose in their place. In the Plaza de la Juderia, Piran explained how the Jewish community were also exiled, while later rebellions by Moorish converts to Christianity saw a further exodus from the city.

In the 19th century, Malaga became a centre of commerce and industry, and the modern city evolved from this time onwards. In the 19th century, art flourished in Malaga, and on Calle San Agustin, by Malaga’s Cathedral, we jumped forward in time to learn about the city’s most famous son: a painter named Picasso.

“Picasso was brought up here along this street by the cathedral,” said Piran. “Near that falafel shop.” You can visit Picasso’s home, as well as the Picasso Museum, which Piran calls one of the busiest museums in Spain. The queue is long, as expected, and we continue without going inside.

Picasso learnt his trade in Malaga, but it was his Civil War paintings in the 1930s that brought his work to the world. The Civil War hit Malaga hard. Originally a bastion for anarchists and communists under the Spanish Republic, the city was taken by Franco’s nationalist armies in 1937 after a brutal siege.

Read more: 5 Ways to Learn About Dublin’s History Without Visiting the Museums

The City of Museums

Tourism really began here in the 1950s when Europeans began visiting the Costa del Sol for its beaches and seemingly eternal sunshine (300 days of sunshine means that city breaks to Malaga in the winter are perfect!).

But while Malaga became the hub for package holidays along the coast, the city is far removed from the resorts of the Costa del Sol it serves. For a start, there are a total of 38 museums in the city, making this a cultural hub for Andalusia. It’s never been quite as popular a destination as say Granada or Seville, but ‘The City of Museums’ is a top choice for a city break.

Malaga’s history makes for an excellent starting point for a trip to the city, but there’s much more to do, including food and wine tours, mountain escapes, and the city’s beaches. I ended the weekend with another historical treat: a relaxing session in Malaga’s ‘Arab Baths’ (although I’d use the term inspired by, rather than authentic!).

How to explore Malaga’s history

Jet2 offers Malaga flights from the UK’s regional airports to the Costa del Sol Airport. It’s a seriously convenient place to land, and you can take the C1 commuter train (just tap on and off with your credit or debit card) and be in central Malaga in just 15 minutes.

I was staying at the Barcelo Malaga Hotel, which is located right next to the central Malaga Maria Zambrano train station where I hopped off the C1 commuter train. I’ve never had a more convenient transfer from the airport to the hotel. From here, it’s a twenty-minute walk to the Old Town. The same C1 train also stops at Malaga Centro Alameda Station, which is a little closer to the Old Town.

From adventures in breakaway territories to interviews with former guerrilla fighters, Travel Tramp’s ‘Travel Stories’ go deeper than most. Follow the action on the blog, or like us on Instagram and Facebook for the latest updates!

Best Places to Explore in Malta