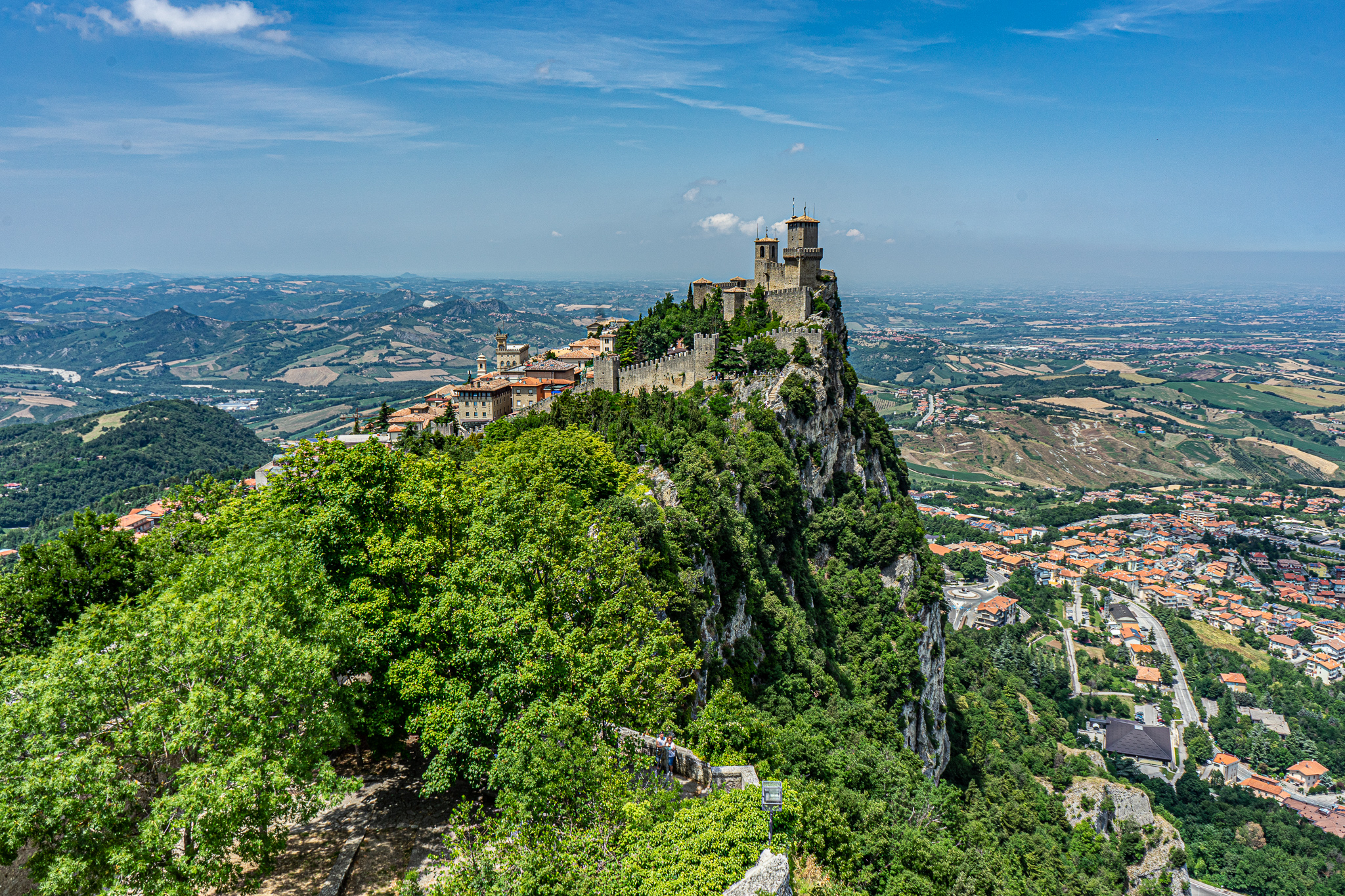 The days of travel as we remember might be over (at least for the time being) and while it’s been a while since I posted on the blog here at Travel Tramp, travel is certainly not something I’ve forgotten about!

The blog posts have undeniably slowed down, while I’ve been in lockdown in my home country of the United Kingdom, but I finally decided to get back to writing about travels past.

While it’s inadvisable to be travelling at the moment (you know, that thing called COVID-19 that’s been going around), I thought I’d take a look at how drastically things have changed in such a short space of time.

This time just last year, I was touring through a large portion of Europe’s microstates – the smallest countries on the continent!

In just 2 weeks, I’d visited 8 different nation-states, on my way to exploring these curious microstates. The microstates I visited were Andorra, San Marino, Liechtenstein and Monaco, but on the way, I travelled through Spain, France, Italy and Switzerland too!

I’d previously visited the Vatican City and Malta, to round off the microstates. But are these tiny states and principalities really worth visiting? Let’s take a look in today’s article!

Europe’s convoluted history and strange mesh of borders has ensured that the continent is packed full of small nation-states and tiny principalities.

These are Europe’s smallest, sovereign nations. That means though, that while these tiny countries are recognised officially amongst the United Nations member states, are still absolutely tiny.

The six smallest states in Europe by landmass, that are officially recognised as UN member states, are the following:

There’s a big distinction here between ‘Microstates’ and ‘Micronations’. I’ll be talking about microstates and not micronations – that’s a whole other article waiting to be written!

While both share similar qualities, micronations are self-declared nations that often have no recognition from other countries.

Micronations include such curious places as the Principality of Sealand or the Republic of Liberland. We could debate the nuances of nationhood all day, but the clear distinction is membership in the UN, which these self-declared micronations lack in comparison to microstates.

Now, I’m not usually one to rate countries, but I thought I’d write this article to help you figure out if you really do need to visit some of these small microstates. The answer is probably not. At least not all of them. As you’ll see, some are fantastic, others you only need to visit if you’re in the area or are looking to visit every country in Europe, or tick off states in order to visit every country in the world.

Microstates offer an intriguing insight into the idea of nationhood though, and why some countries are sovereign states, and others are not.

So, let’s get to it. In alphabetical order, let’s take a look at Europe’s six smallest countries, and let’s see if they really are worth travelling to!

The Principality of Andorra is located high up in the mountains of the Pyrenees. The capital city is Andorra la Vella and the official language for the 70,000 population is Catalan.

Andorra is one of those strange historical anomalies that should have been taken up by either Spain or France, but somehow, it remained independent despite having borders with both of these countries.

To get here, I took a bus from Barcelona airport, up into the mountains. It’s not a difficult or long journey!

And what are the best things to do in Andorra?

Well, if you’re here in the winter, it’s a fantastic place for skiing. Or so I’m told. I’ve only ever skied indoors, and I was here in the height of summer. Even at altitude (Andorra la Vella is the highest altitude capital city in Europe!), it was hot. And I mean, really hot. At least the sunlight was giving my skin a little anti-ageing after arriving from the colder climes of England!

So what’s the verdict? Andorra gets the thumbs up!

In summer, the hiking is glorious, and it’s definitely a place to visit if you want to enjoy the great outdoors. There’s even a hiking route that takes in the entire circumference of the country in a few days (you could literally walk around an entire country!).

And, whether you’re here in summer or winter, everything is basically tax-free!

Liechtenstein is another geographical and historical anomaly and one that should seemingly have been swept up by either Switzerland or Austria in past centuries.

At just 160 square kilometres in area, Liechtenstein is about a third of the size of Andorra, but this small parcel of land is still ruled over by a monarchy. Officially the Principality of Liechtenstein, the nation’s rulers have held onto power and independence since 1719.

To get here, I took a train and then a bus from Zurich, Switzerland. It’s a beautiful journey into spectacular Alpine territory, but there’s little to distinguish Leitechtestine from Switzerland. There’s no borders, just a casual sign saying welcome! They even use the same currency!

Vaduz, the capital, is home to a famous castle where the royal family still live (and one day a year, where they throw a party and offer out free beer!), and there’s some great hiking in summer and skiing in winter.

Of all the microstates in Europe, it’s Malta that has the most things to do. This small island in the Mediterranean usually has fantastic weather, although when I visited in November a few years back after finding a cheap flight with Ryanair, it rained most of the time.

Malta has a lot to offer though, from beaches, snorkelling and diving, to epic coastal scenery and the historic streets of Valletta. The culture and history is a curious mix of Italian, Arab and British (everyone speaks English, as Malta was part of the British Empire), and you can find some great food and plenty of intriguing museums.

Monaco. The tax haven, casino friendly, home of the excessively rich is not a place I recommend visiting if you’re looking for things to do.

There’s really nothing to do in Monaco, except look out across a harbour teeming with super-yachts and stand outside the famous Casino Royale. It’s expensive too.

I took a train here from Nice, just a short ride away. There’s much more to do in Nice than there is in Monaco, but tick it off quickly if you’re looking to visit every country in the world, and then get back to France!

San Marino is absolutely tiny, but it’s one of the most fascinating microstates in Europe. San Marino is completely surrounded by Italy, and I travelled here by taking a bus from nearby Rimini, which is best known for its beaches and bars.

Okay, so like most places on the list, San Marino doesn’t have a whole lot to do, but it’s the history that really makes this a place to visit. You see, San Marino could be the oldest country in the world (it depends how you really define this) because San Marino has been an independent republic since the year 301 AD when it was granted independence from the Roman Empire.

There’s some good pizza, cheap beers, and a spectacular castle overlooking the old town. Definitely a must-visit, especially if you’re in Italy already!

Vatican City is one of the better known European microstates, and that’s because this small city is of course home to the Pope.

The Vatican once held power over vast swathes of Italy, through the Papal States. But all that remains now is the Vatican City. Completely surrounded by Rome, this is one of the busiest places I’ve ever visited in my life.

The queues to get in were huge and you’re chaperoned around the museum, and through the ‘city’ in what’s essentially an endless moving line of other tourists.

If you don’t mind a queue and want to see famous sites such as the Sistine Chapel, or if you’re a die-hard Catholic, then the Vatican is a must-visit. If you’re not much into your religious history, there are much quieter places to visit when you’re in Rome.

So, Are Europe’s Microstates Really Worth Travelling Too?

So what’s the conclusion? Should you make the effort to explore Europe’s microstates? Id’ say yes, although don’t bother with Monaco, unless you’re trying to tick off every country in the world or are looking to play at the casino!

Europe’s microstates are a quirky piece of the continent’s history and while they don’t have a huge number of attractions, they have their own unique identities and form part of the region’s long history.

More than this though, they offer a fascinating look at the concept of nationhood, and why some countries are a country, but why others aren’t.

Unique Experiences to Have in Monte Carlo, Monaco