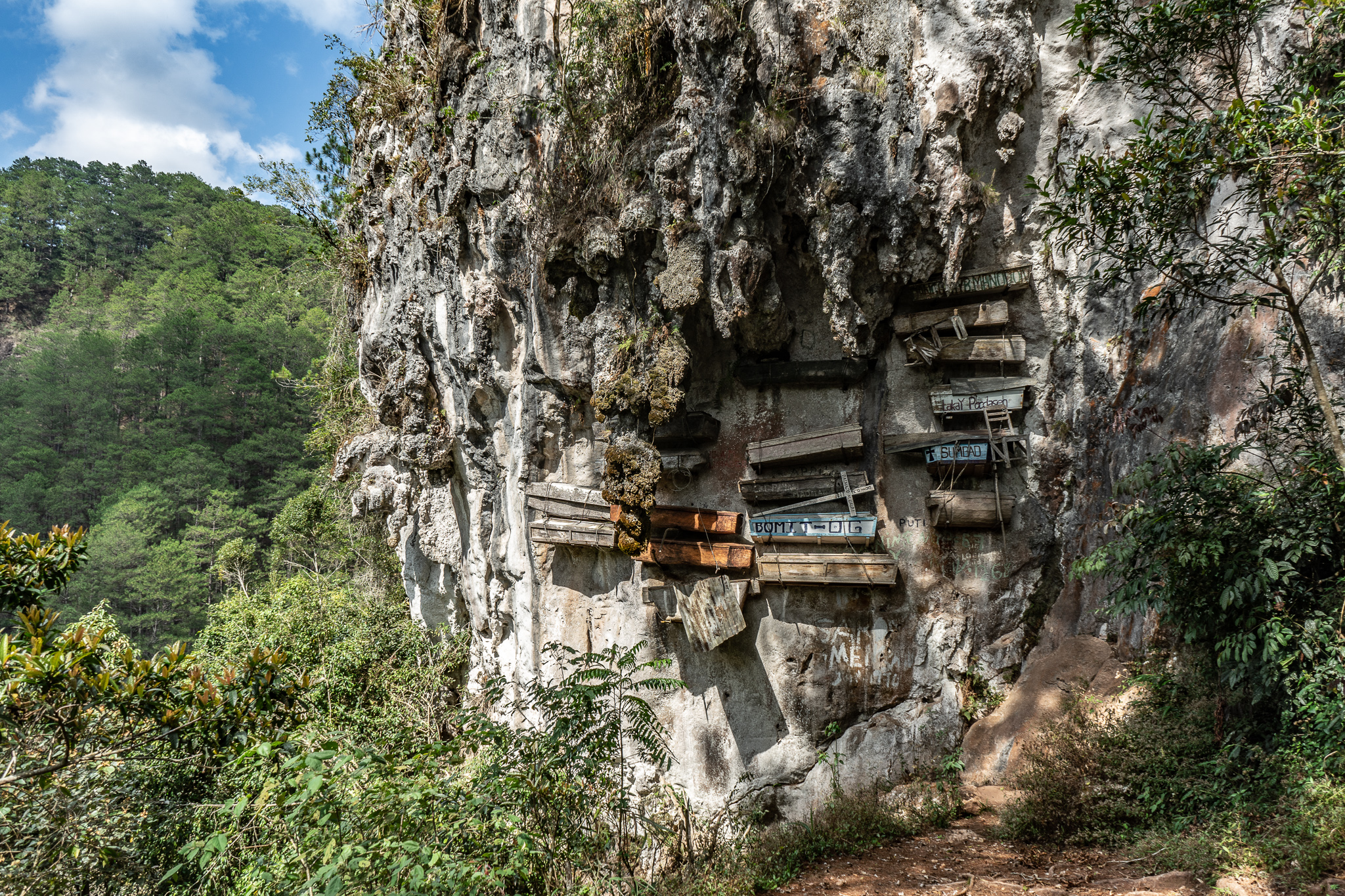 When I reach the bottom of the deep valley, I can see the unmistakable shape of faded, wooden coffins.

The coffins are out in the open, but they aren’t being prepared for burial below ground. These coffins are hanging from the face of the tall limestone cliffs that rise vertically upwards, precariously secured beneath a sharp undercut of jagged rock that forms a natural shelter from the elements.

It’s an unusual sight, but it’s a common sight across Sagada, the mountainous region of Luzon – in the Northern Philippines – where for thousands of years the indigenous groups have hung the deceased, in death, from the rocks around them.

“My ancestors called this place Echo Valley”, Zel, a local Igorot guide tells me as we stand in the depression, where limestone cliffs rise hundreds of metres above us.

The view is spectacular. Jagged rocks are covered in lush, green foliage, forming natural layers as I look along the length of the valley.

“They called it Echo Valley because when there was a burial here, the village elders would shout and the noise would echo around the valley”, Zel explains. “That way, they could communicate with the dead”.

But this is no burial in the ordinary sense. The departed aren’t buried underground, but in Echo Valley, they are placed in their coffins and hung from the cliffs, a practise which has been enacted by the local indigenous tribe, an ethnic group known as the Igorot, for centuries.

These are the famous hanging coffins of Sagada.

“I’m an animist”, Zel remarks when I ask if he has a religion. “But in Sagada, there are many religions and beliefs”.

Sagada is found in the heart of Mountain Province, a remote part of the Philippines which is known for its hanging coffins, vast rice terraces, unique musical and tribal traditions, and for its fiercely independent indigenous groups.

While much of the Philippines was colonised by the Spanish from 1565 onwards, the Spaniards never made it this far into the mountains. The terrain, the remoteness and the headhunting traditions of the locals meant that Sagada retained not just independence, but beliefs and culture too.

After three centuries of Spanish rule, catholicism became the primary religion of the Philippines in the lowlands. In the mountains though, many indigenous and animistic beliefs are still practised, including the hanging of coffins from cliffs in the valleys by the Igorot.

People like, Zel, who is of Igorot descent, still practise these ancient traditions, but the story isn’t quite so black and white. On the hike down into Echo Vally, we pass an Anglican church, which was built by Americans in 1898, the same year the US took over the Philippines from the Spanish.

“At first, the locals weren’t too happy about the church in Sagada. Everyone was animist back then”, Zel tells me. “But, the church started to give out warm clothes at the end of a service, and in winter, it can get cold in the mountains”.

Zel is clearly dubious of the merits of the church in Sagada, but walking through the Christian graveyard it’s clear that many more locals took up the offer of blankets and warm clothes and began to practice Christianity.

But the Christian practises here aren’t like those you will find elsewhere because this religion is a unique mix of Anglican and Animist beliefs that are found in Sagada.

Zel explains a few of these local customs, which includes the surprising process of exhuming the bodies of family members, redressing them and then reburying them. This, he says, is done when a family member is ill, as the process is supposed to help heal the living.

The Hanging coffins of Sagada

Down in the valley, many of the coffins hanging from the rock have Christian crosses painted over them or inscriptions from the bible carved into the wood.

Zel explains that people continue to be interred this way in Sagada, although it’s not as common as Christian burials. This isn’t necessarily down to beliefs, but for practical reasons too, because it’s much easier to bury a coffin than to hang it precariously from a cliff – a process which can involve erecting scaffolding or uses strong vines to lower the deceased from the top of the rocks.

The last coffin to be hung at this particular site was in 2010, but there are hundreds, if not thousands more hanging coffins to be found across the valley, and in the mountains surrounding Sagada. Some are just a few months or years old, while others are much, much older. “The tradition has been traced back at least 600 years”, Zel muses. “But of course, it could go back much, much further than that”.

“If the coffin is a long, coffin then that’s a Christian who’s chosen to be buried in an animist way”, Zel continues as we stand under the cliff. “The shorter coffins are for people buried in the foetal position, which is the traditional way.”

Many Sagada locals might identify as Christian, but they still prefer to be buried in the Animist way. A coffin burial isn’t a burial that’s allowed for everyone, however. Strict tribal laws and traditions have been passed down from one generation to the next, and the wall we are standing under, for example, can only be the burial place of a person who has not died of disease – what Zel calls a “clean death”.

Many of the coffin hanging sites are off-limits though because they are found in remote and difficult to reach parts of Sagada, but the cliff in Echo Valley, however, has become one of the busiest tourist attractions in Luzon.

Dark tourism, it seems, has become a big deal in the Philippines, and across the country, you can find unique destinations with a macabre past, such as the abandoned Old Diplomat Hotel in Baguio or the Cagsawa Ruins in Bicol.

This interest in Dark Tourism though, means that places like Sagada are becoming busier, and Zel explains how the local authorities had to construct the fence we were standing behind to keep visitors back. In the past, tourists would get too close or even pose for selfies next to the coffins, and then the locals would see the spirits and bodies of their families being essentially desecrated.

This is a truly unique tradition though, and it’s no surprise that the hanging of coffins of Sagada have become a popular place to visit in the northern Philippines.

Over time, the coffins and the bodies inside eventually degrade and become part of the surrounding scenery. In some cases, the bodies might fall from the coffins, in which case they are reburied, while ceremonies are enacted to ask forgiveness of the deceased. In other cases, given the limestone in Sagada, coffins can even become entirely calcified, literally becoming part of the rock itself.

It might sound macabre and dark, but the hanging coffins of Sagada are an enduring tradition and one which tells the fascinating tale of the local Igorots, in the tribal regions of mountainous Luzon.

Travelling to Sagada? Sign up for Air BnB to book your accommodation using this link HERE and you’ll get £25 free credit towards your first booking!

The Dark Depths of the Catacombs of Rome