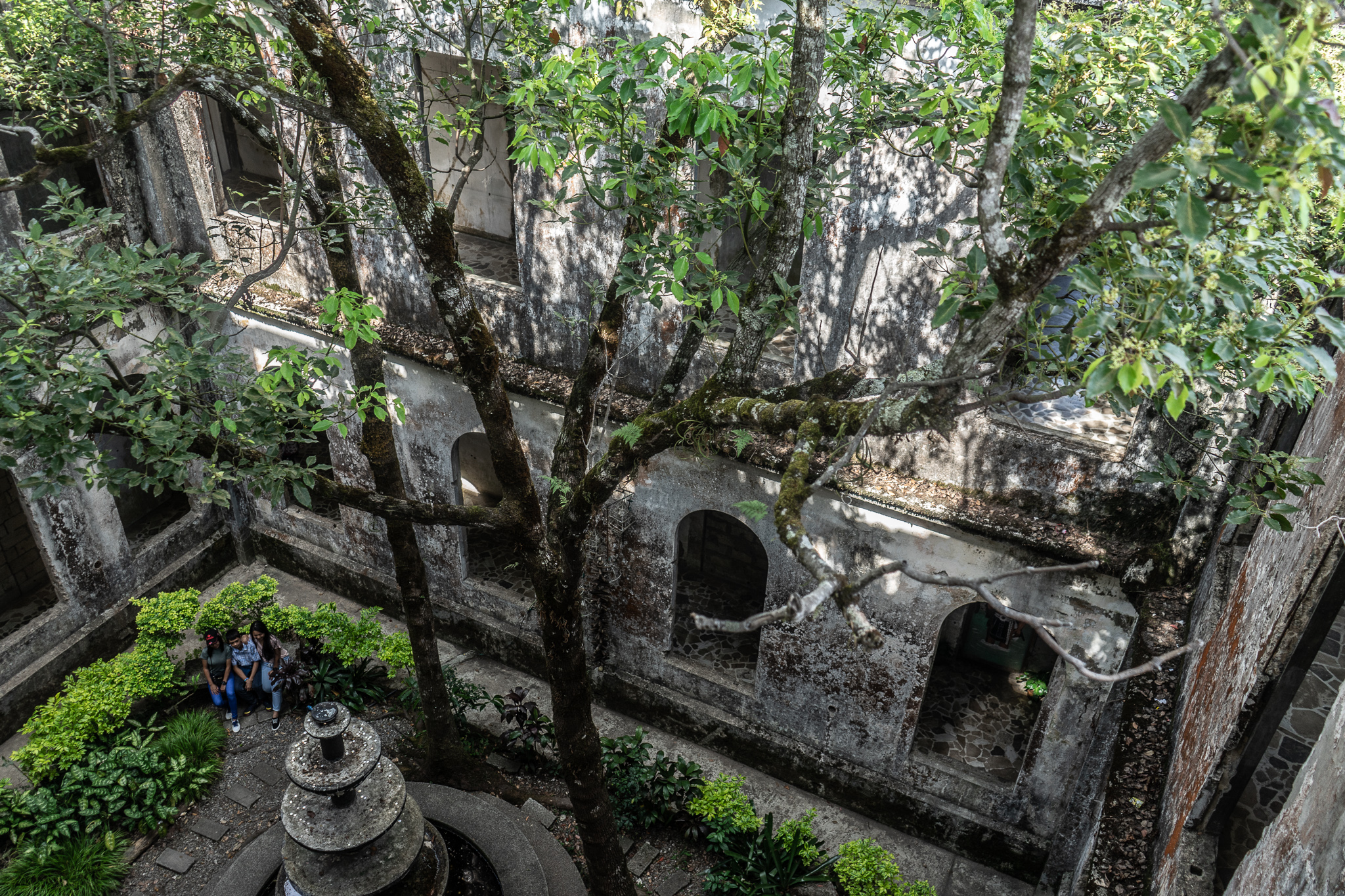 In the rolling hills above the Philippines’ Summer Capital, the Diplomat Hotel Baguio stands crumbling and forlorn. All that’s left is the shell of what was once a high-end hotel, which since the 1980s has lain completely abandoned.

The Diplomat Hotel in Baguio City has a dark history. It’s said to be one of the most haunted locations in the Philippines, because over the last century, many horrifying events have occurred here. During World War II, the Japanese committed massacres when the building was used as a Dominican retreat, while misfortune seems to have followed those who in later years tried to turn it into a hotel.

The Old Diplomat Hotel has an infamous, dark reputation, and I was expecting the abandoned complex to be overgrown and empty. The hotel was crumbling, but empty it was not. It soon became clear that the Old Diplomat was one of the most popular tourist attractions in Baguio.

This wasn’t the Dark Tourism I was expecting.

Dark Tourism in the Philippines

Dark Tourism is kind of a big deal right now, what with Chernobyl blowing up – well, the power plant literally did explode and now the HBO TV show is doing the same – and with David Farrier’s Netflix series, Dark Tourist, taking what was for years a niche and vaguely disturbing past time into the realms of mainstream travel.

In the Philippines though, Dark Tourism has been a bit of a thing for a long time though, even if, as one Filipino blogger puts it in a blog post, it’s mostly been done “unknowingly”. There’s the hanging coffins of Sagada, the Cagsawa Ruins in Legazpi, and the ever-popular Corregidor Island in Manila Bay. All of these sites though have long been top tourist spots in the country, despite their associations with the macabre and with death, and across the Philippines, you can find many more Dark Tourist sites which are bursting with tourists.

This might be a surprise for the regular Dark Tourist travelling to the Philippines, because many regulars in the field are used to having abandoned hotels to themselves, or being the sole explorer venturing into the mountains in search of a bizarre funerary tradition.

In the Philippines, it’s the opposite case, but I never realised this until I visited the Diplomat Hotel Baguio, and found this abandoned building to be packed out with Filipino families and tourists looking for a fun filled day out!

It’s best known as the Diplomat Hotel, but in fact, the abandoned building I was visiting had started out not as a hotel, but as a retreat for the nuns and friars of the Dominican Order. Its official name was the Dominican Hill Retreat House, and from 1913 until World War II, it served as a sort of religious holiday home in the hills of Baguio.

This Dominican retreat wouldn’t survive World War II though, and sadly, neither would many of the nuns and friars. When the Japanese invaded the Philippines, Baguio, with its large United States Army Base and Military Academy, was one of the first cities to be attacked, and it quickly fell in the proceeding onslaught that arrived on December 8th, 1941.

Many refugees, fleeing the invading Japanese, looked to the Dominican Hill Retreat House for safety, and the building was inundated with those seeking shelter. The house did not turn out to be the refuge that the people needed, as the Japanese slaughtered everyone they found in the building, including the nuns and friars.

The events are said to have been particularly brutal, because the Japanese secret police, the Kempeitai, were leading the massacre. Civilians and soldiers alike who were caught here were mercilessly slaughtered. Women were raped. Children were killed. The walls ran red with blood.

At the end of the war, as the Americans and Filipinos prepared to retake Baguio, the building became the site of yet another massacre, as this time the Japanese soldiers and police stationed here decided to kill themselves, rather than be captured. In the Battle of Baguio, the house was hit hard by bombing too, and for years after the end of the conflict, it would lay empty and forlorn, as stories of ghosts and terror grew around it.

In the 1970s, after decades of neglect, a local businessman acquired the retreat and converted it into the Diplomat Hotel. It was only open for 14 years however, until the death of the owner forced the hotel’s ultimate closure, for good.

By the end of the 1980s, the Diplomat Hotel Baguio was once again abandoned and crumbling, and anything that was leftover from its short lived hotel days was looted and ransacked.

Rumours now though, were stronger than ever when it came to stories of the hotel being haunted. Guests who had stayed in the bedrooms had often told of eerie noises and spoken tales of ghosts and the macabre. The hotel, with its history of horrific events and horrible misfortune was to become known in the Philippines as one of the country’s most haunted buildings, and of course, the stories began to attract curious visitors looking to find out more.

The Most Haunted Building in the Philippines?

I don’t exactly believe in the supernatural or ghosts, but you can tell when a place has had more than its fair share of terrible history. The Old Diplomat Hotel is one of those, and a quick glance at its bloody history will reveal just how unfortunate are the events that have occurred here, particularly for the people caught up in them.

It’s no surprise then, that the old hotel has earned itself the moniker of being one of the most haunted buildings in the Philippines, and it’s no surprise that it’s become somewhat of a Dark Tourism attraction in Baguio.

The rooms are empty, aside from some bizarre modern installations which have been placed inside to try to liven the place up a bit. There’s a giant chicken constructed from bamboo, a santa claus on the bottom floor and some spray painted gas tanks on the roof.

The artwork fails to distract from the fact that the building still looks like it was completely gutted, which it was, in a hurry, and while there’s little broken glass or smashed masonry, the rooms of the old hotel have certainly seen much better days.

If you do believe in the supernatural, then the Diplomat would certainly be a haunting place to visit.

As I was alluding to earlier in the article, don’t visit the Old Diplomat Hotel in Baguio and expect to be the only person there. It’s not the chilling, haunting experience you might expect from an abandoned hotel – it’s not the same experience I had in Bali for instance, bribing my way past security guards to get into the crumbling ruins of the abandoned Ghost Palace Hotel, which is said to be the most haunted building on the island!

The Old Diplomat Hotel, is actually one of the busiest tourist attractions in Baguio, especially on the weekends. When I rocked up to the gate, I didn’t have to push my way through cobweb covered railings or climb over rusty barbed wire fences. The gate was wide open, and big groups of tourists were having group pictures taken outside the entrance.

Inside, children were running around and people were posing for selfies. Someone had a big pink birthday balloon floating behind them as they walked through the ruins and everyone seemed to be having a marvellous day out.

Despite the building’s reputation for the macabre and for the hideous crimes committed here, tourism at the Old Diplomat is booming, but then again what did I expect? Filipinos are the best in the world at putting a positive swing on events and making the best of a bad situation. Perhaps that’s why Dark Tourism in the country became a big deal so unwittingly.

I suppose, in a way, this is how Chernobyl will look in a few years too – except on a much bigger scale – now that people have become aware of the fact you can actually visit this disaster site. It’s weird to say, but the future of Dark Tourism actually is going to be a bright one, and with the government looking to refurbish the Old Diplomat, the future of the abandoned hotel is set to be a lot brighter than its dark past.

How To Travel To The Old Diplomat Hotel Baguio

The Old Diplomat Hotel is located in Baguio City, in Northern Luzon, a few kilometres outside of the city centre. The best way to get here from the city itself is to take a taxi. While Baguio does have Grab, in my personal experience there aren’t so many drivers registered on the App, and you can end up waiting for a long time. There are many taxis in Baguio though and you can wait on the side of the road, and hail one day within minutes in the centre. Unlike in Manila, I never had any difficulties with rouge drivers trying to rip off a tourist or with any ‘broken’ meters.

Ask the driver to put on the meter and you should pay somewhere in the region of 100 PHP, depending on traffic etc. As already explained, it’s surprisingly busy, so you won’t have too much trouble finding a taxi for the return ride either as people are constantly being picked up and dropped off.

There’s no entrance fee to the ruins, and the gates are kept open from 6 am until 5 pm. There’s a church next to the Old Diplomat Hotel – bizarrely, the church is home to the world’s largest Ten Commandment Scrolls, which is a strange sight on the roof of the building – and you can use the restroom for a small fee.

Officially, the Old Diplomat Hotel is known as the Dominican Heritage Hill and Nature Park, as the government are trying to restore and refurbish the area and turn it into even more of a tourist attraction!