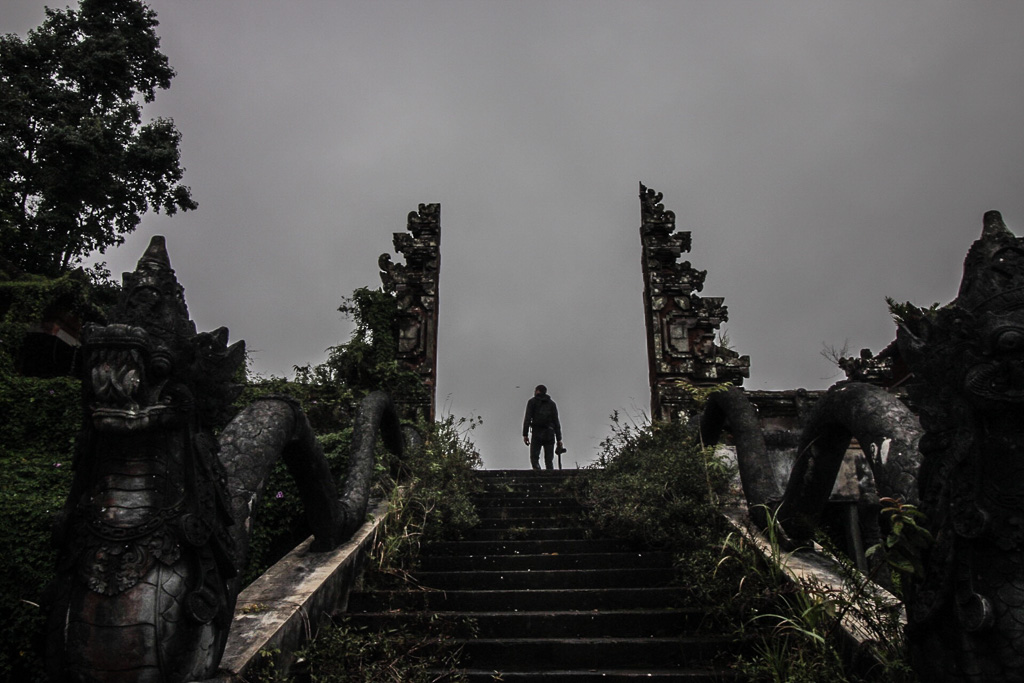 I explored the ruins of the abandoned Ghost Palace hotel in Bali!

It’s safe to say that Bali is a pretty well established holiday destination. The Indonesian island is popular with tourists looking for a piece of South East Asia where they can relax, party or surf.  I wasn’t interested in any of these pursuits though on my last visit- well, maybe a few Bintangs were drunk- and you might ask why I decided to travel here if I wasn’t going to sit on a beach or surf some waves. I was here because I was interested in getting off the beaten track. I was here to explore the ruins of the abandoned Ghost Palace Hotel in Bali.

The PI Bedugul Taman Rekreasi Hotel and Resort- otherwise known as the Ghost Palace Hotel- is a haunting concrete shell that never opened its doors to guests.

The ‘Ghost Palace’ as this abandoned hotel has become known to the few travellers who venture inside to explore the dark corridors is found on the winding mountainous road to Bedugal Lake, just a few kilometres from the infamous tourist exclave of Kuta. But unlike the hotels of Kuta, the Ghost Palace doesn’t take reservations.

Having heard urban legends of the resort’s demise and rumours of its forlorn and haunting remains on the mountainside I knew I had to explore its abandoned remnants, to see what clues I could unearth of its downfall and subsequent turn to Balinese legend. 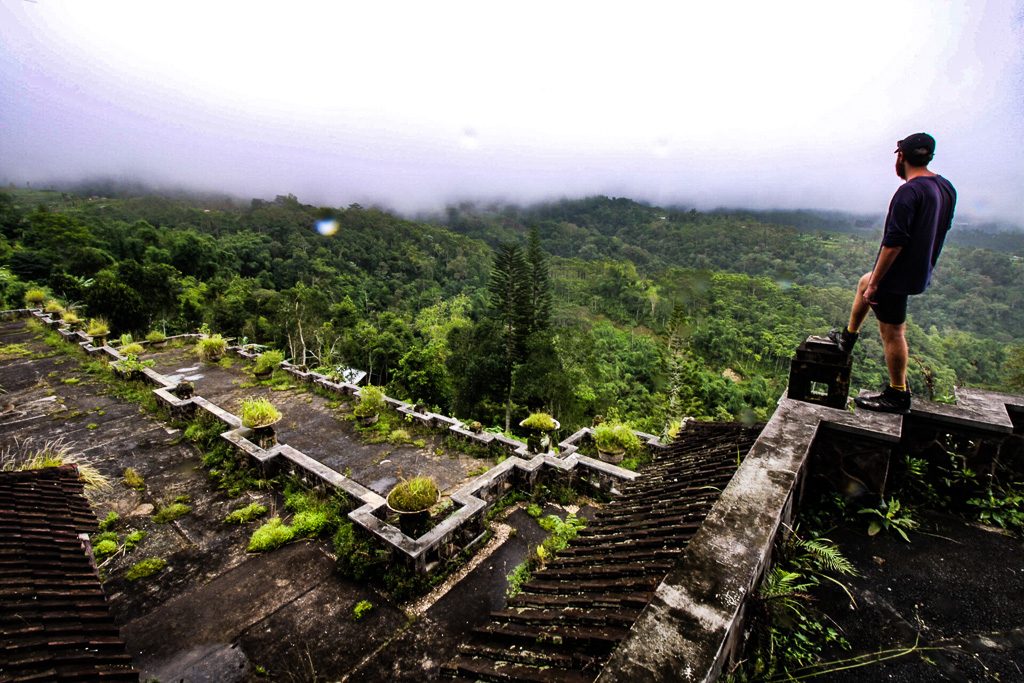 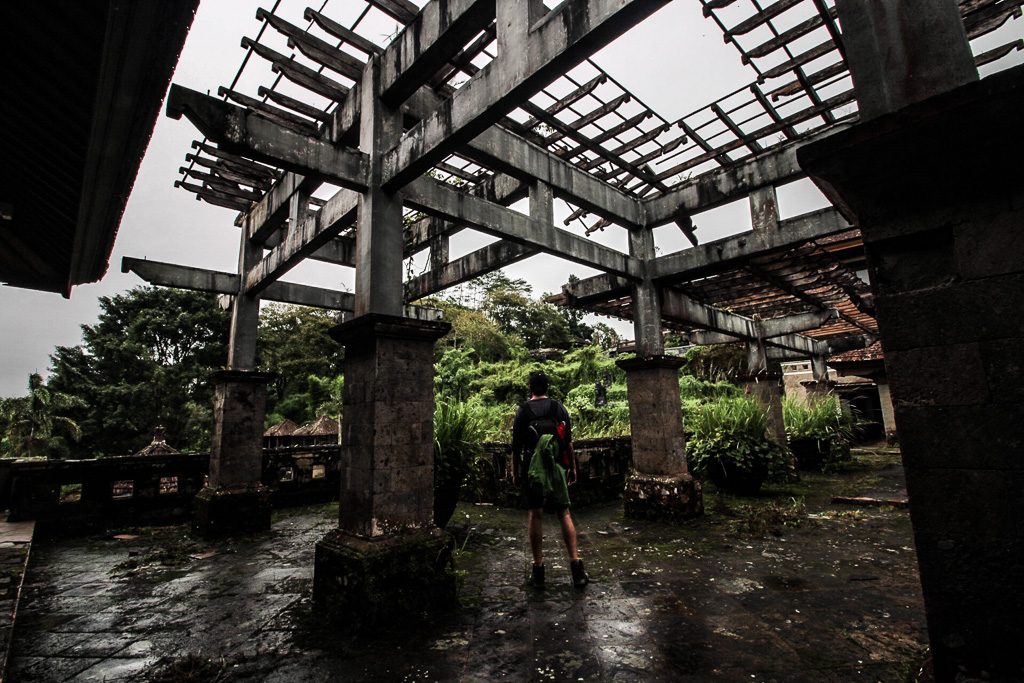 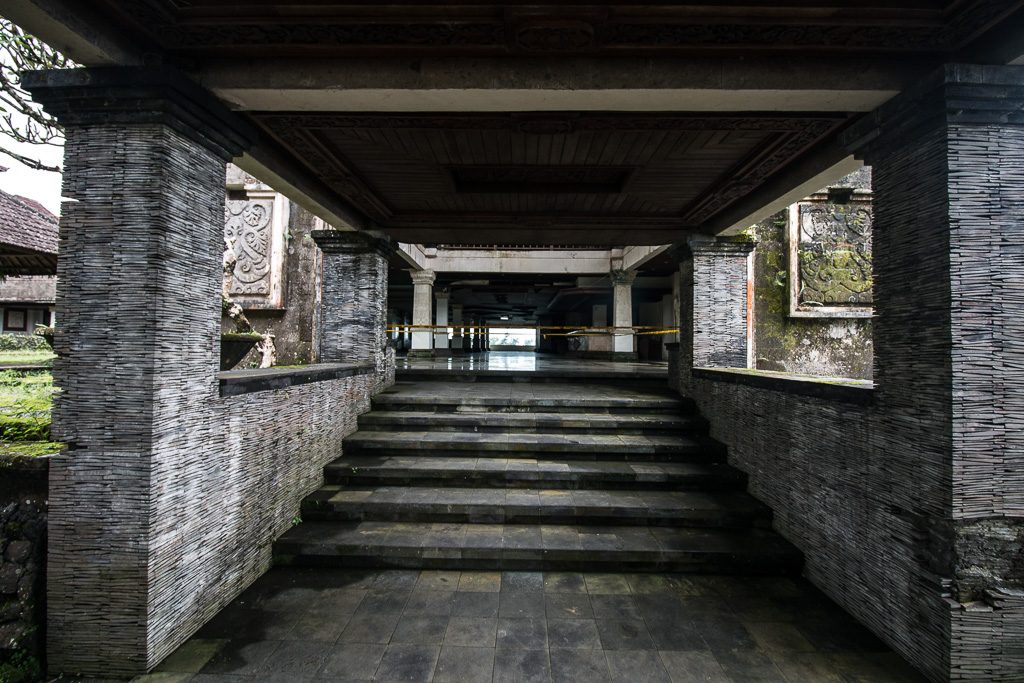 I set off from Kuta on a scooter, weaving through the dense traffic of Bali and navigating the busy, winding lanes which led towards the mountains.

The Ghost Palace is situated in beautiful surroundings. Nearby is Lake Bedugal, and from the resort’s high elevation there are sweeping views across forest, rice fields and towards the imposing shape of Gunung Agung, Bali’s most famous volcano.

At the forlorn entrance to the hotel I was met by a rudimentary barricade blocking the wide, grand accessway into the compound. Two ‘Security Guards’ lazing by the side of the road said that it was closed. Unless I had 10,000 Rupiah for a ‘Ticket’.

With my ‘Ticket’ purchased, they pulled away the logs and barbed wire that blocked the entrance, and told me to park the scooter by the main entrance, a place intended for valets to greet guests. 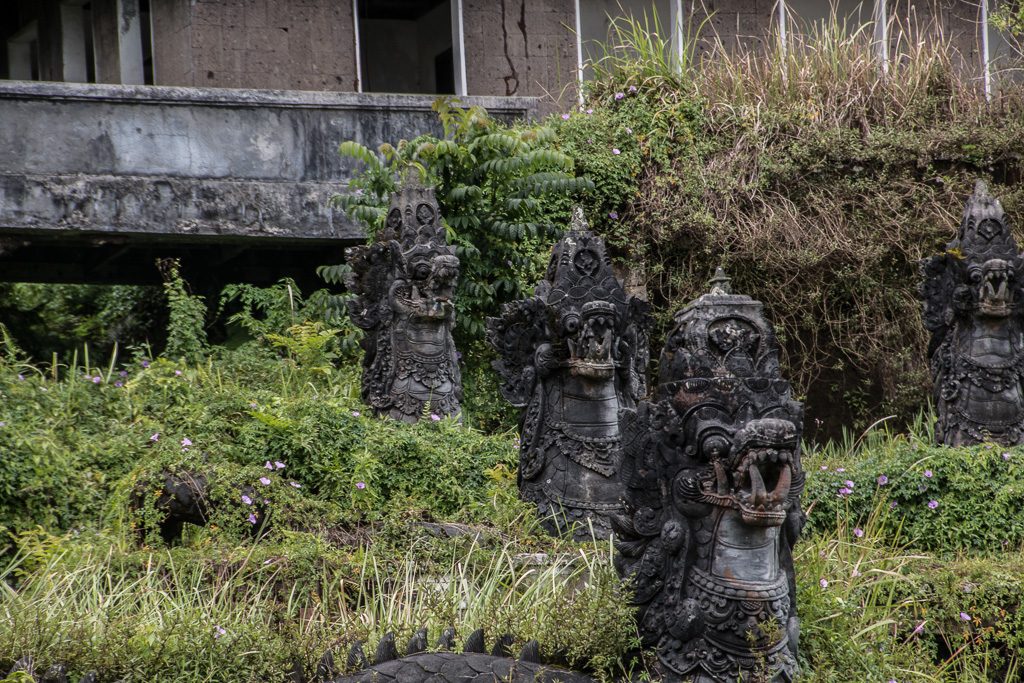 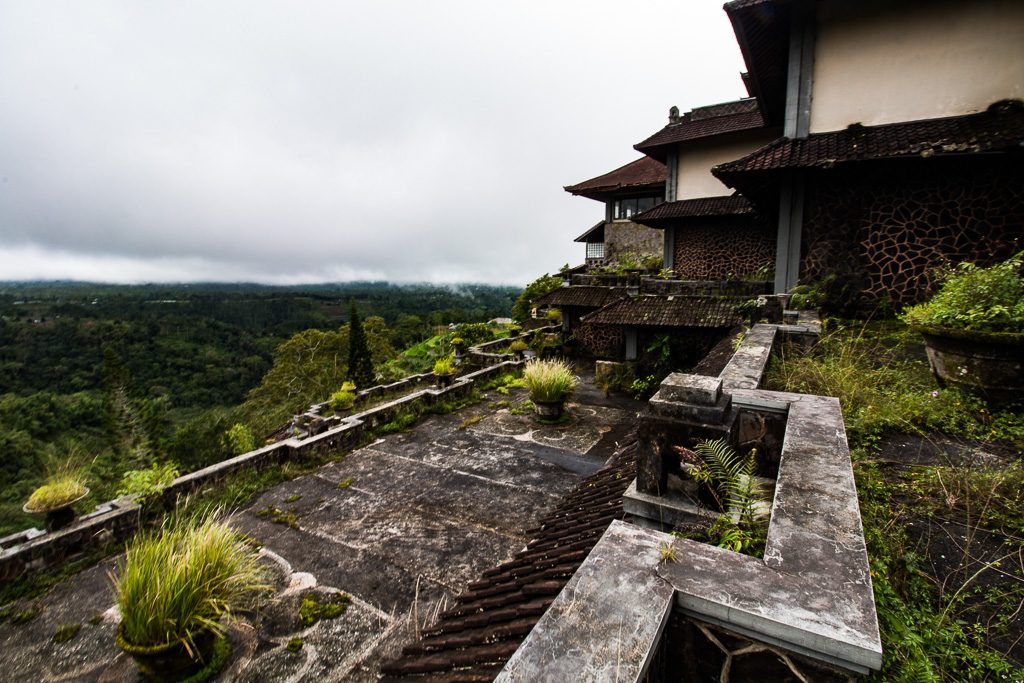 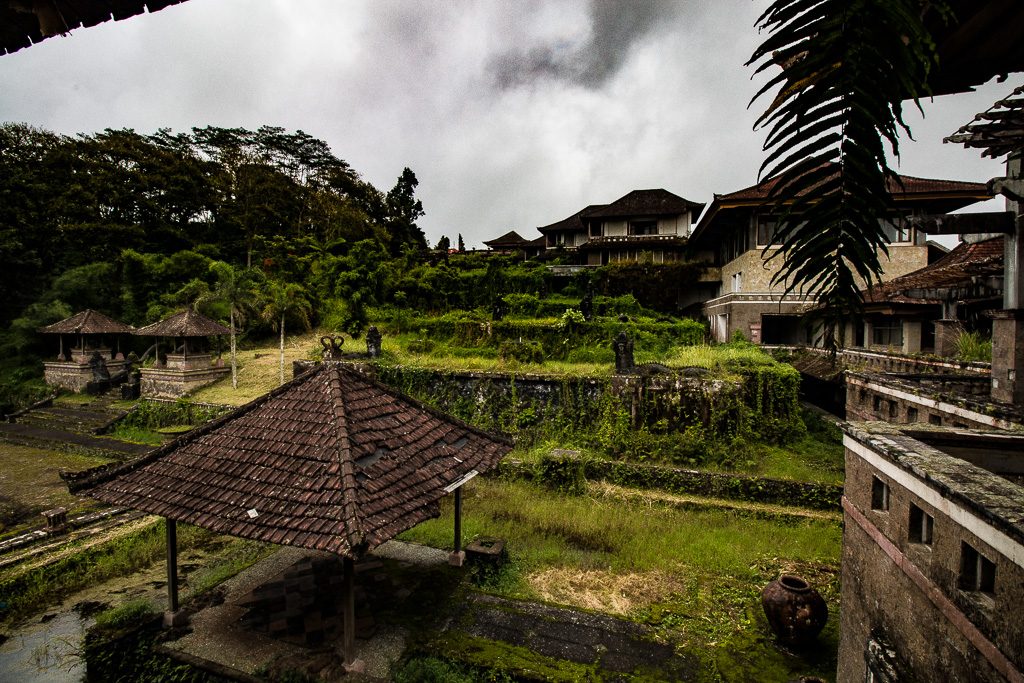 A Hotel That Never Opened Its Doors

Finding information on the Ghost Palace is a challenge at best. Rumours abound on the internet. But that’s all they are. Rumours. Most sources I’ve encountered theorise that the most realistic story regarding its construction and subsequent abandonment are linked to a man named Tommy Suharto.

Tommy is the son of the former Indonesian President. A businessman jailed for corruption and murder. He is linked to the investment of the project, which then supposedly fell through when he was jailed in 2002. The same year that construction was halted.

None of these sources can be verified, and the rumours and legends are continually expanding and being provoked by more unverified sources.

It simply seems that nobody, at least nobody willing to talk, knows the full extent or circumstances of the events that led to the abandonment of the hotel.

All that is known, is reflected in the hotels now commonly used name, ‘The Ghost Palace’. This is a place that people associate with ghosts, curses and death, whichever story you choose to believe.

With few facts to go by, I walked up the concrete steps and into the main foyer of this Ghost Palace, to be greeted by yellow warning tape and empty reception desks. 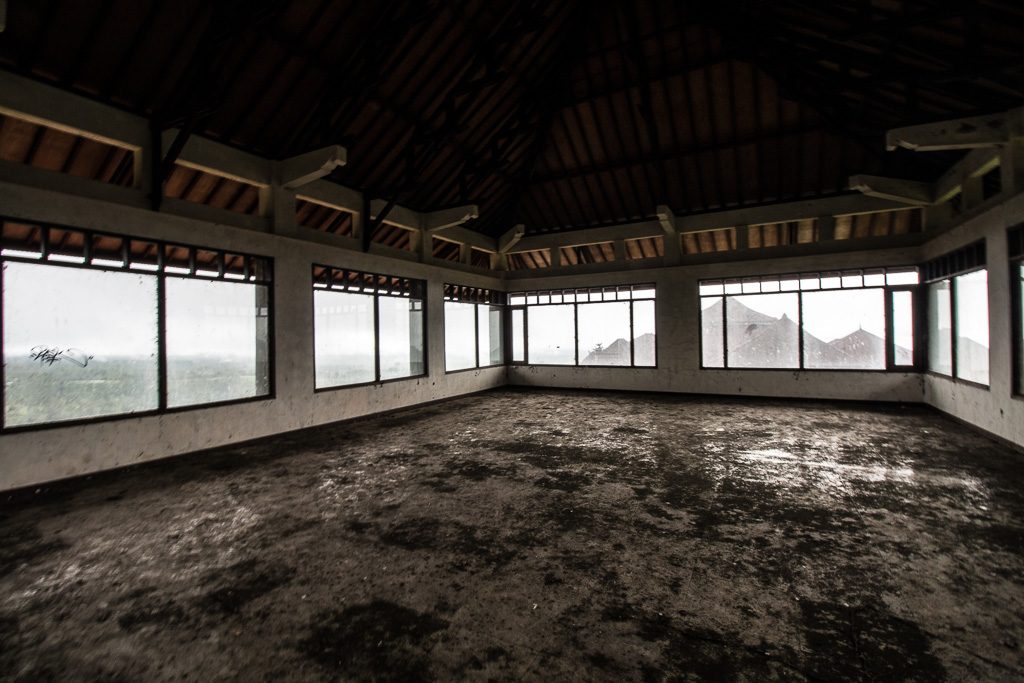 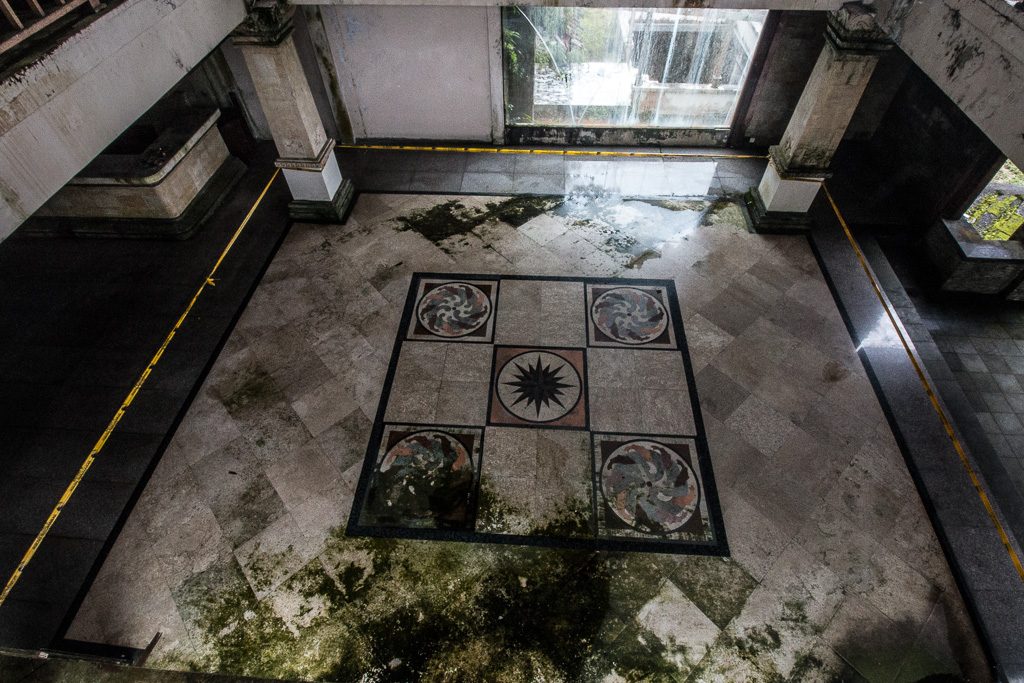 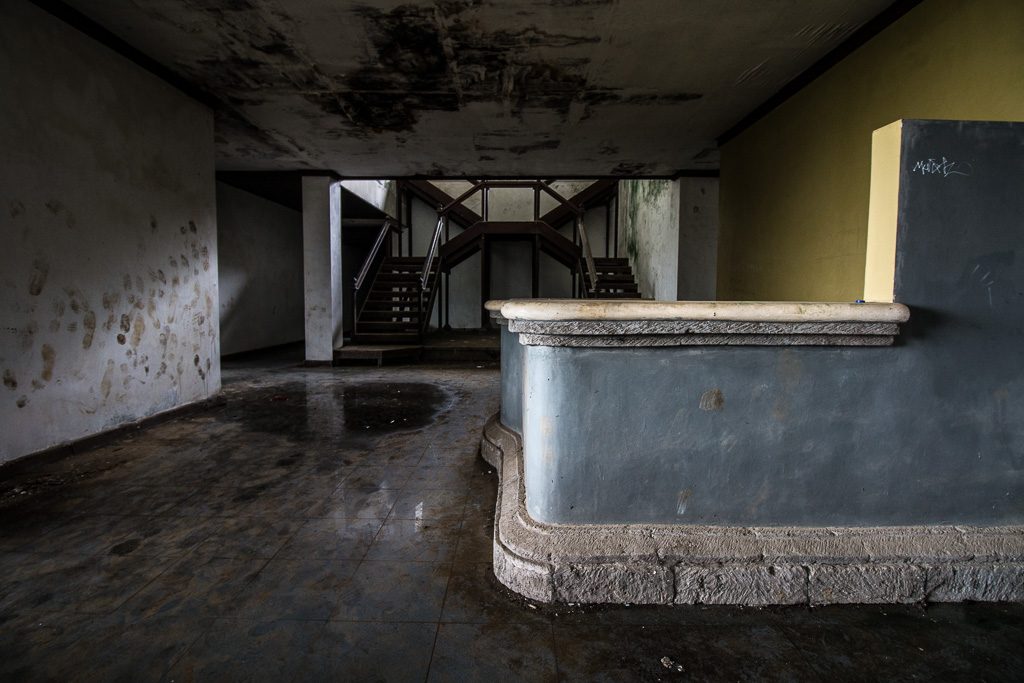 The hotel was a grand project. Its location alone would surely price the land at a premium for investors. The empty rooms overlook volcanos and forests, offering spectacular views acros the entire island and ideal vantage points for sunset and sunrise.

The rooftop terraces could have teemed with guests and tourists looking for grand visatas and evening cocktails, while the suites and bedrooms were large and accomodating.

Despite its now overgrown, decaying look, these suites and bedrooms still look as if they were fully completed. Windows and doors are in place, electric wire hangs from the ceiling and bathtubs lie dirty and moulding. The structure is there, in its entirety, the only thing missing is the decor and the furnishing. This is a project that was abandoned at the last, in mystery that continues to fuel its inevitable intrigue. 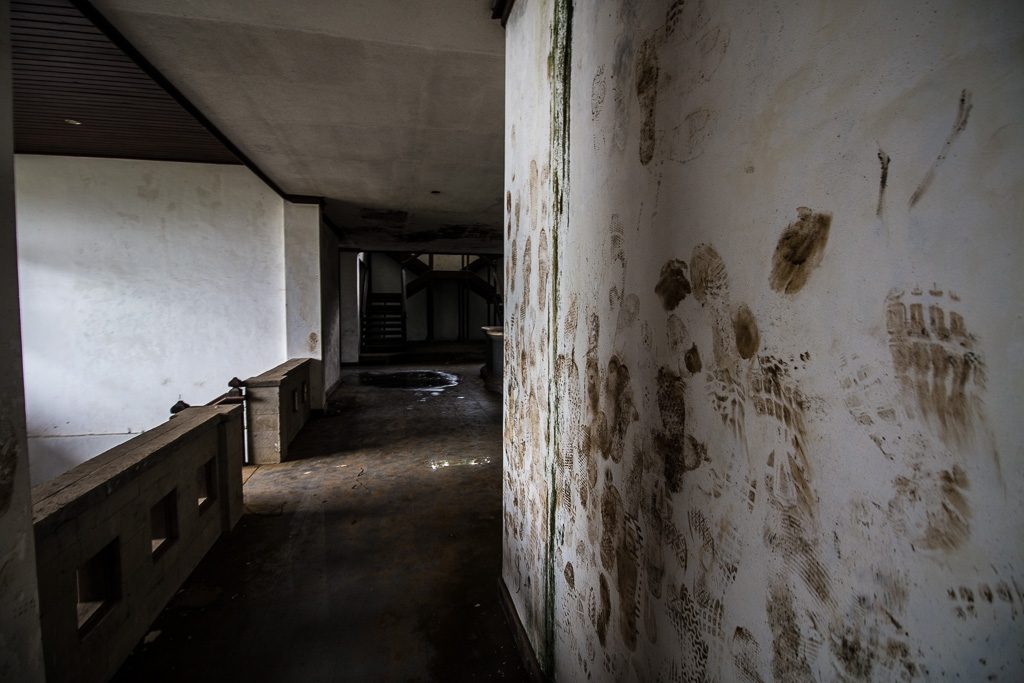 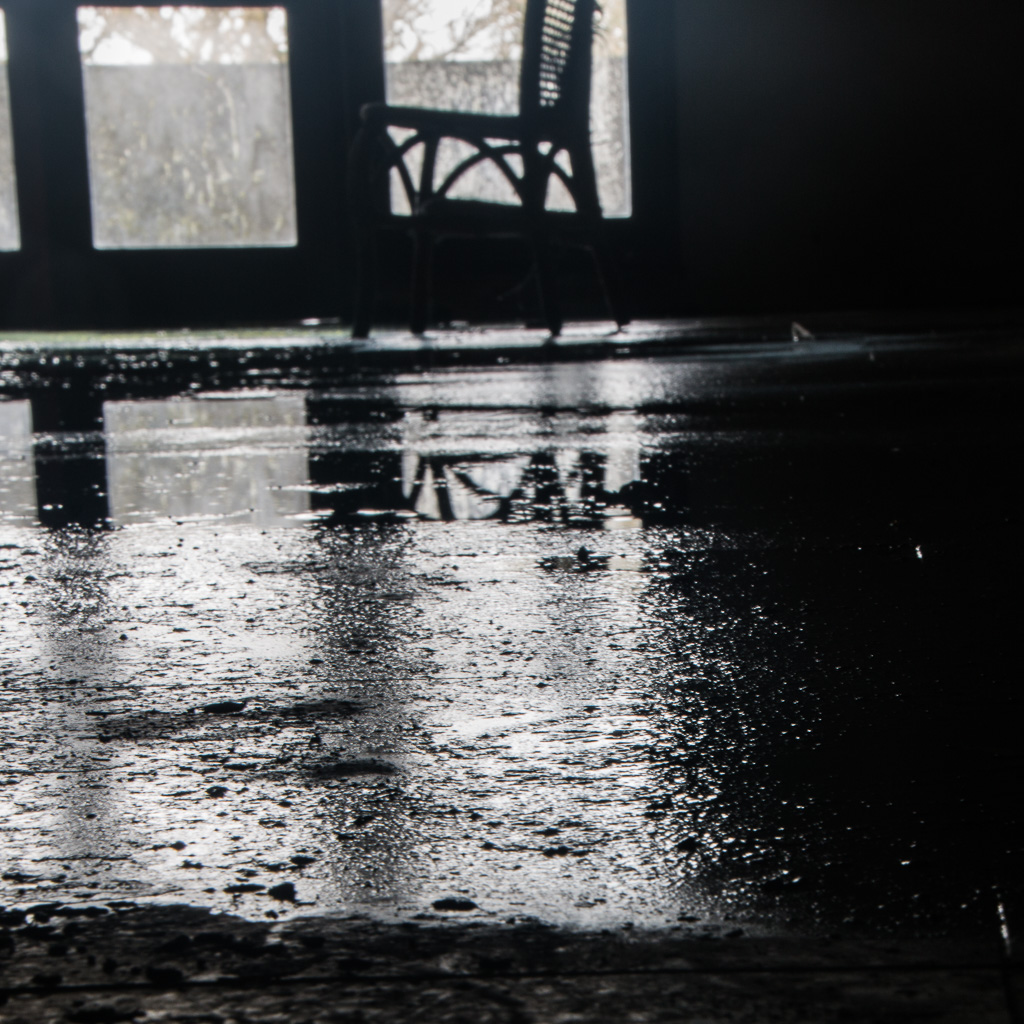 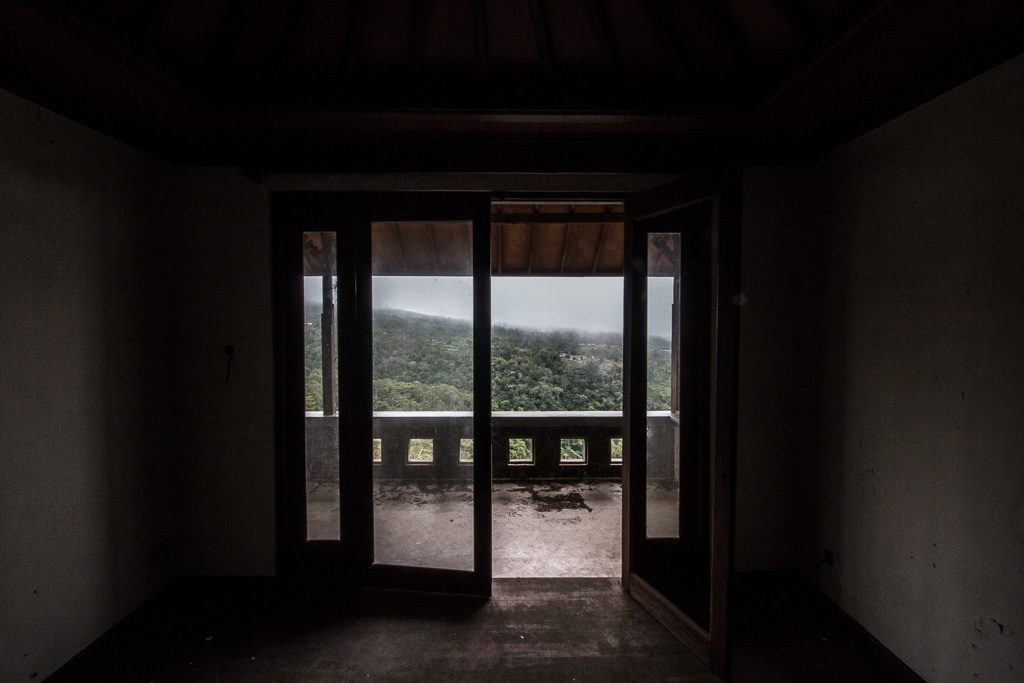 Time and neglect has taken its toll on what was completed. Just as rumours have overgrown its story, the abandoned Ghost Palace Hotel is overgrown with creeping vines and jungle.

Wildlife now calls this place home too. Walking through the dark corridors I avoided the odd snake and frequent spiders. Much that I didn’t see lay lurking in shadows.

Loud noises frequently came from the floors above or below, and it soon became clear that I was not the only person in the hotel. 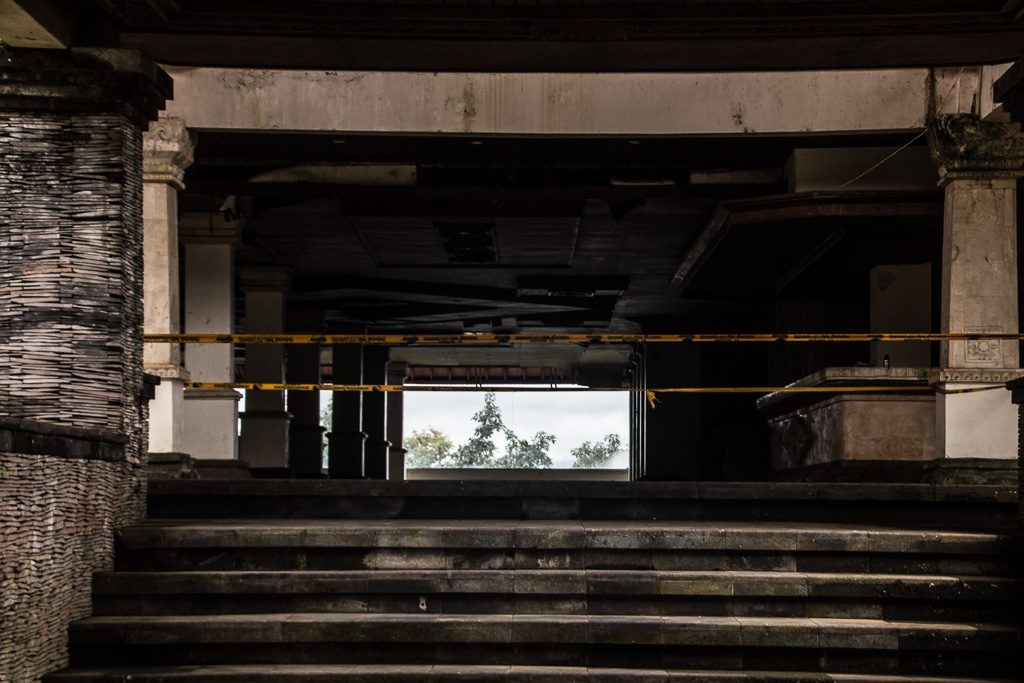 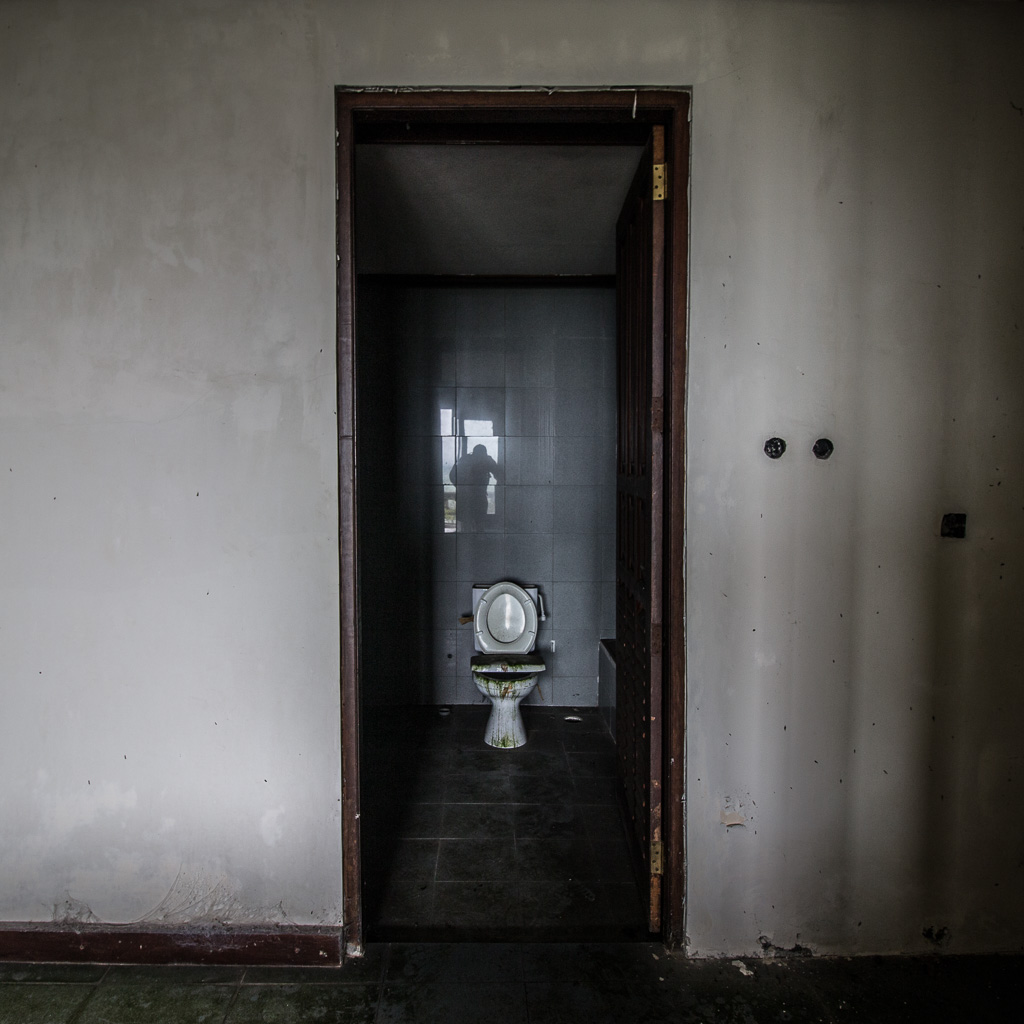 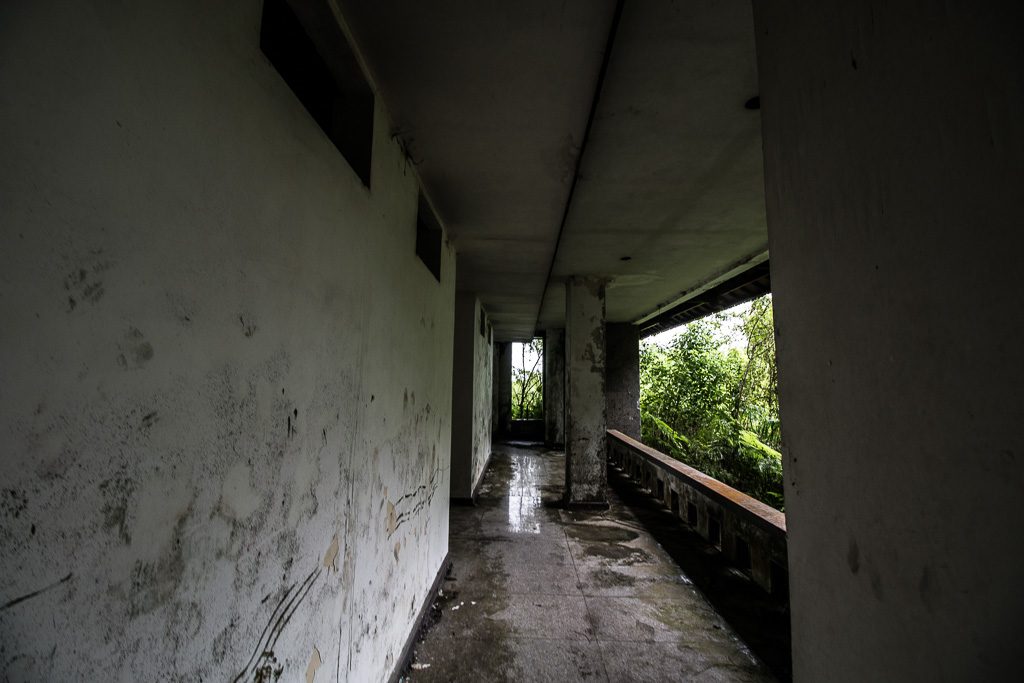 I Was Not Alone In The Ghost Palace Hotel

I had thought that I might be the only one there. But it seemed that the Ghost Palace Hotel was fast becoming an unusual tourist attraction.

The hotel grounds are vast, and the corridors extensive. It would be easy to get lost in the rooms and amongst the decaying floors of the building. Easier still to be spooked in the low light of the abandoned Ghost Palace.

I could never be quite sure what was waiting round the corner. But rather than walking into wild animals or untoward characters -snakes and spiders aside of course- it was other tourists I would run into in the corridors, an experience still disconcerting in the confusing labyrinth of the Ghost Palace.

The rumours surrounding the hotel and perhaps the need for a new adventure in touristy Bali- something different to the beaches and bars- is what made me visit, and I’m sure it’s what is enticing other urban explorers and even just the bored tourist to venture into the overgrown concrete of this abandoned resort. 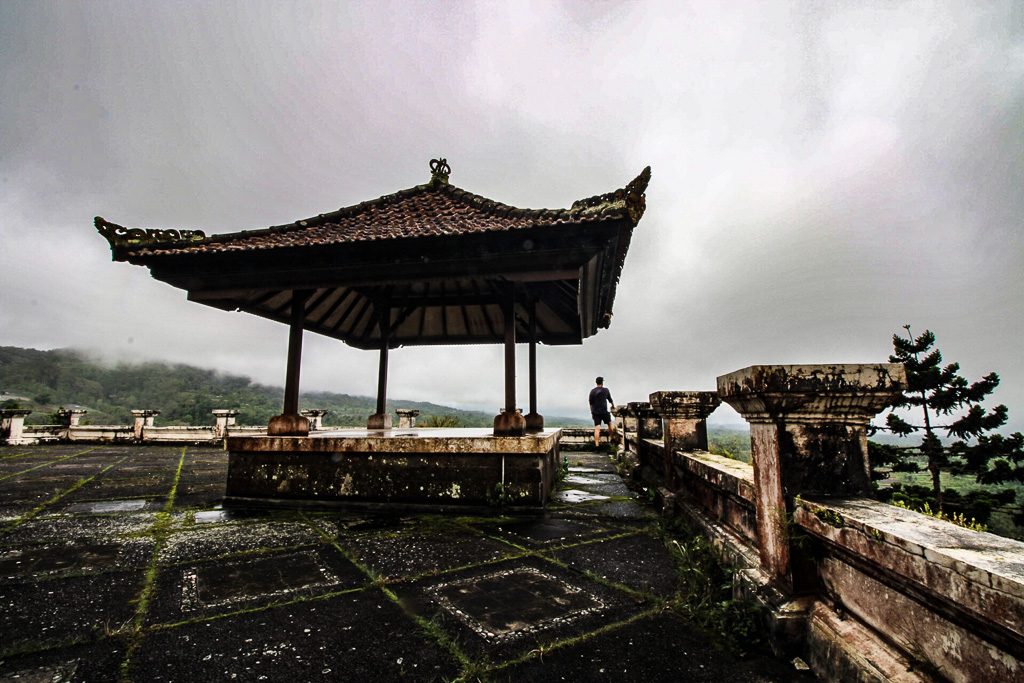 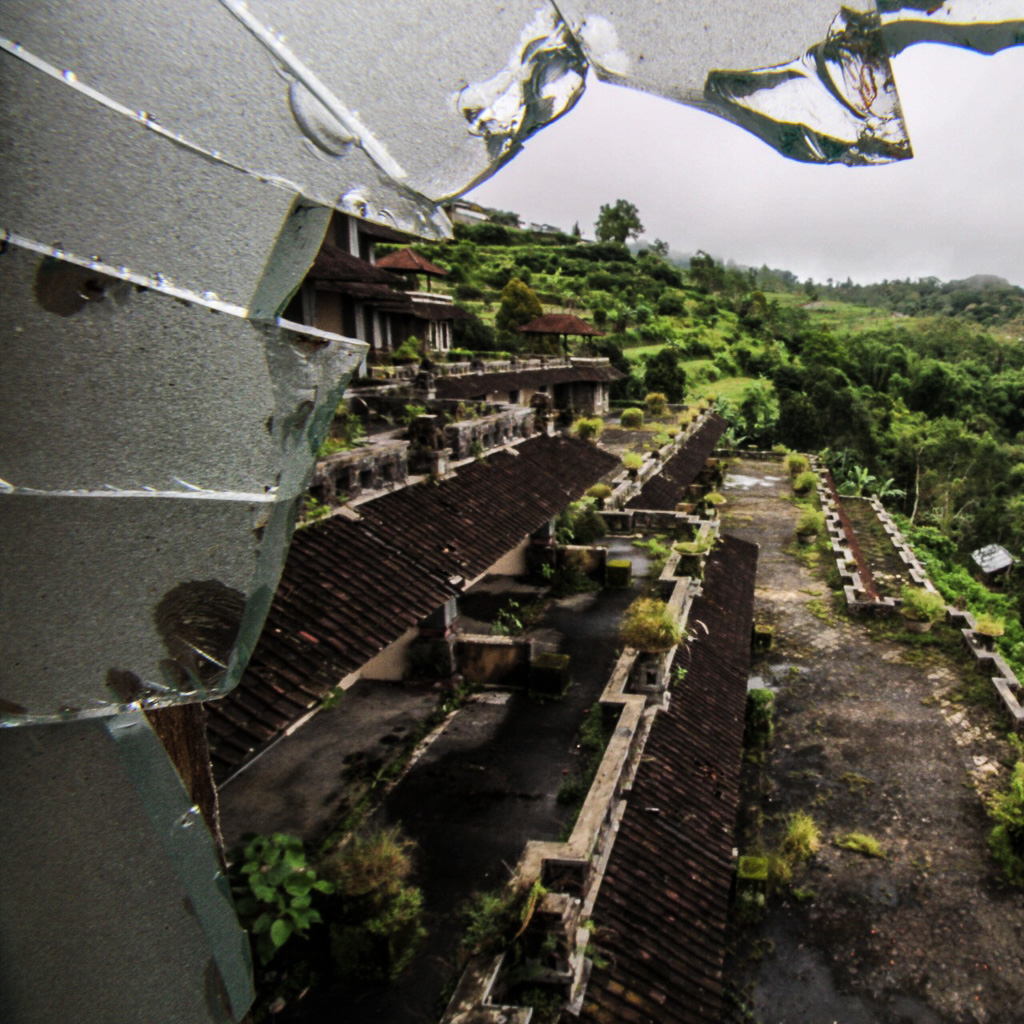 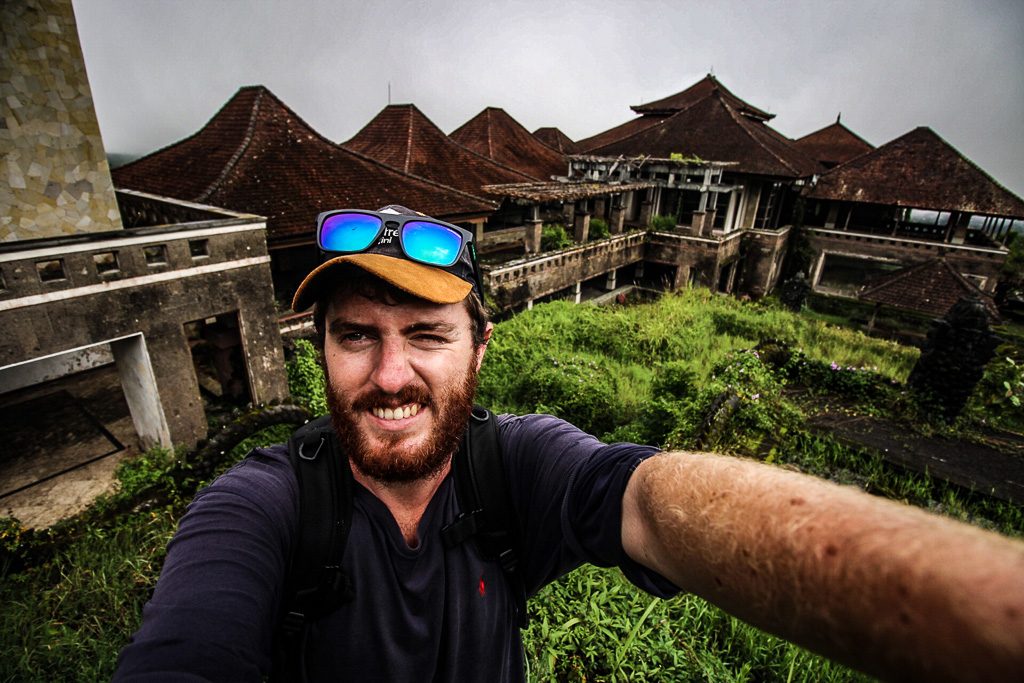 Snakes, Rumours And Decay. All With A Beautiful View.

The Ghost Palace Hotel is a strange place to visit. Its potential as a resort is unquestionabale, and it’s interesting to wonder what could have been if the rooms were furnished and the doors opened to guests. It’s an intriguing look at the other side of tourism in Bali, the failings and bankrupties, the corrution and money that you don’t usually see as a tourist.

Now the tired rooms are crawling with spiders and snakes live in the long grass. The views though, are beautiful, and once you step past the initial fear of wondering what lurks inside the darkened corridors, it’s an exhilirating place to explore and to pose the question, what if?

That’s a question I couldn’t find any answers too though. The real story behind the Ghost Palace will inevtiably be lost under the weight of its legend. But overgrown with the stories and rumours that exacerbate the myths that surround this abandoned hotel, the Ghost Palace is sure to see more tourists walking through its broken doors than ever booked a night’s stay here. 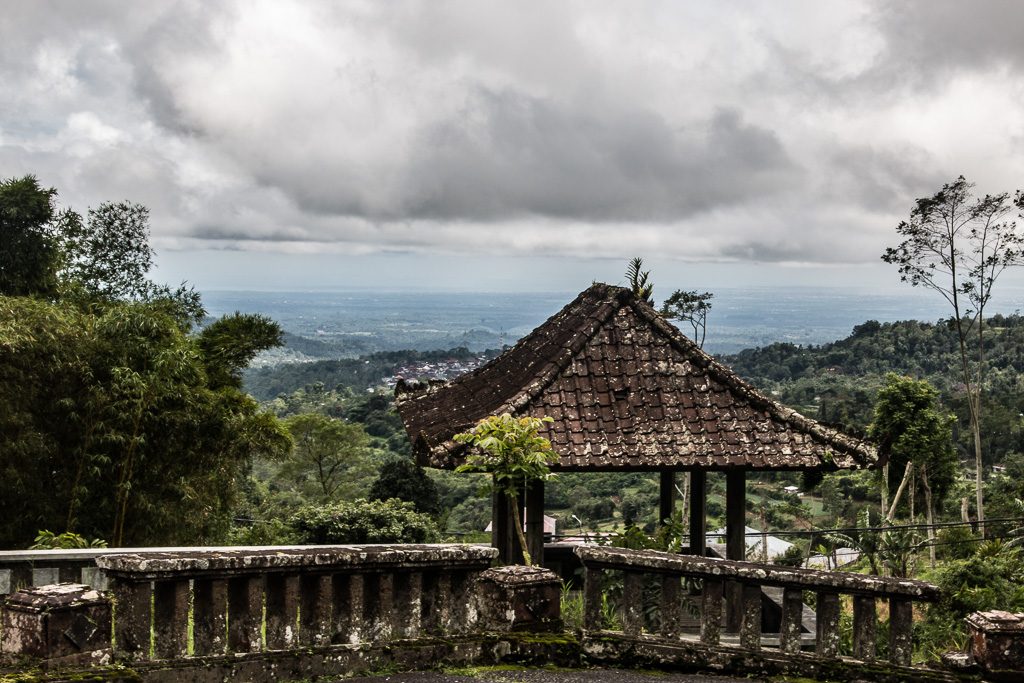 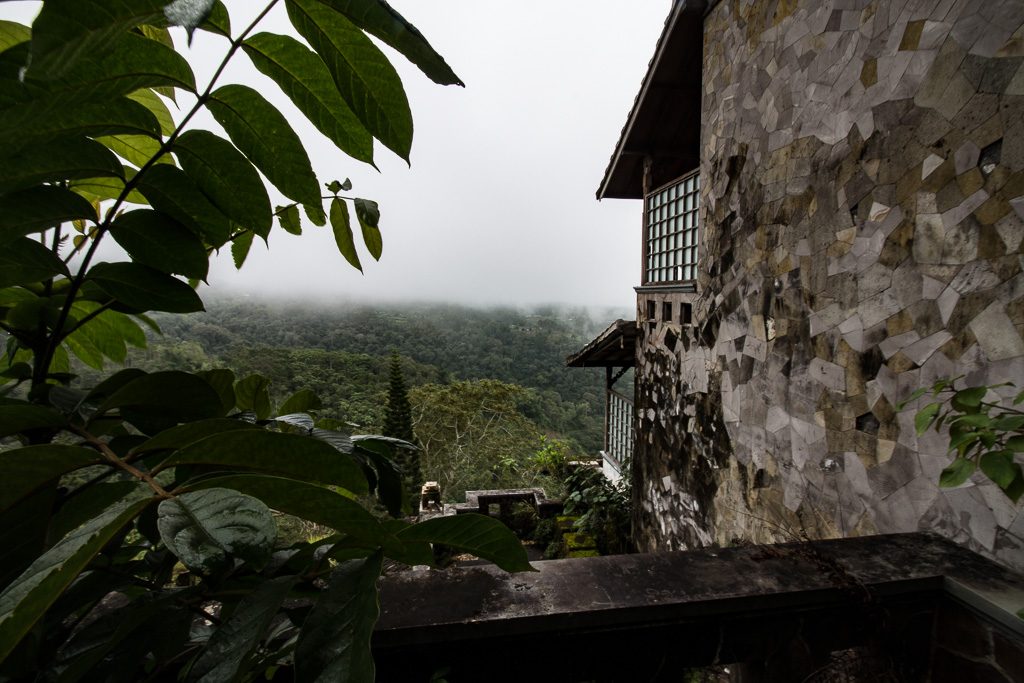 How To Travel To The Abandoned Ghost Palace Hotel Bali

Do you like abandoned stuff? Then check out this abandoned theme park I explored in Bali! Click HERE!

Travelling to Bali? Then why not support this blog by booking your accommodation through our partners at Booking.com! Don’t worry, there hotels are usually not abandoned like the Ghost Palace. There’s no extra charge to you, the customer, but you’ll help me to keep creating more awesome content like this! Just click HERE!