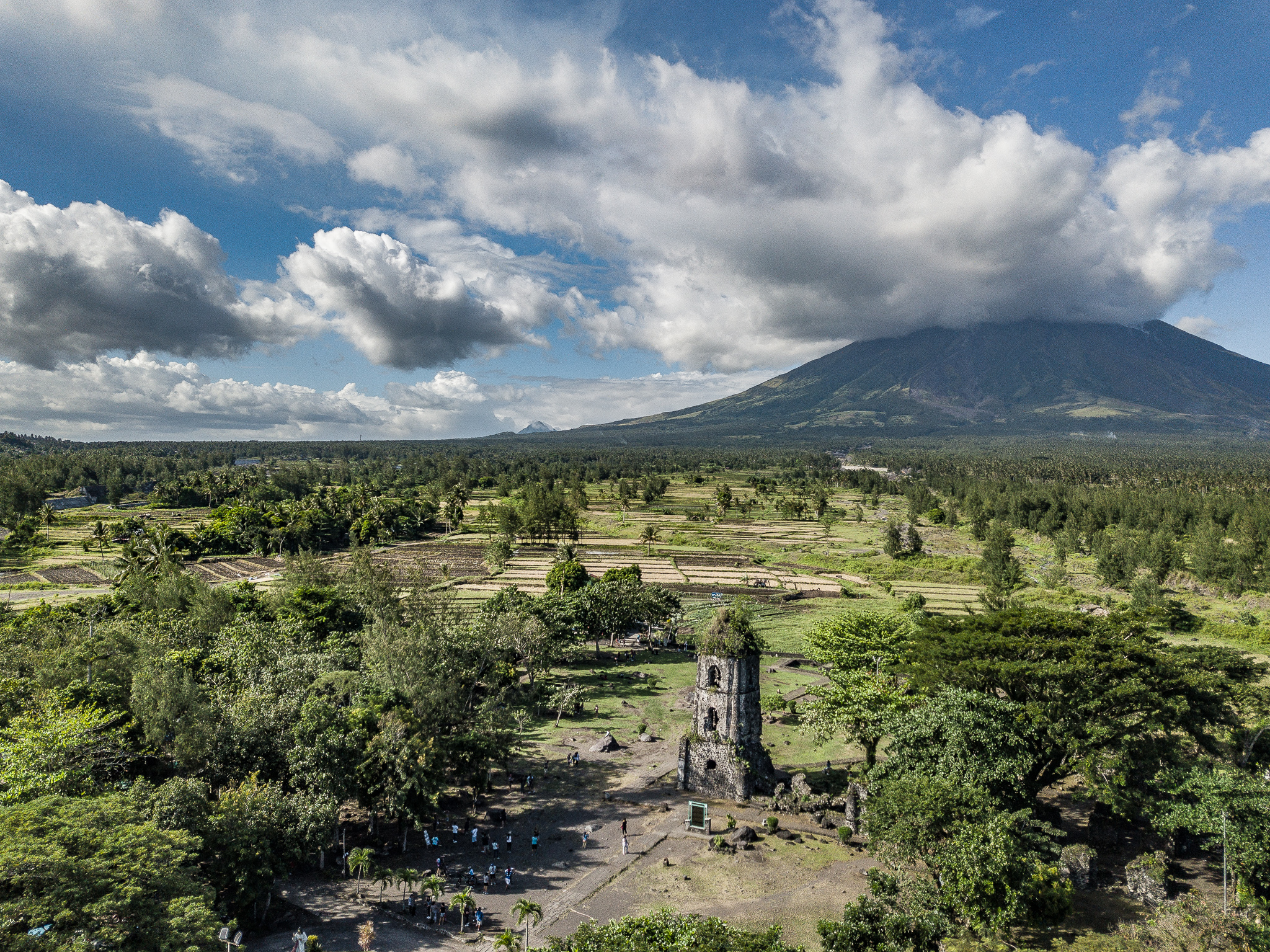 On February 1st, 1814, Mount Mayon began spewing smoke and ash on the horizon as the people of Legazpi feared the worst.

Before many had the chance to evacuate the area, Mount Mayon was erupting violently, and a huge pyroclastic flow was hurtling down the steep mountain slopes towards the Cagsawa Church.

Today, the Cagsawa Ruins, in the shadow of the rumbling Mount Mayon, are a sight that sincerely demonstrates the dangers of life in Legazpi, under the perpetual gaze of the Philippines’ most active volcano.

The Cagsawa Ruins are slowly crumbling on the edge of the modern city of Legazpi. All that stands are a few dilapidated walls, overgrown with vines and grass and the towering belfry, which somehow survived the devastating blast that levelled almost everything else.

The village of Cagsawa, located around 7 miles from Mount Mayon, has little left of it to show that this was once a bustling, busy settlement. Since 1814, the Cagsawa Ruins have been left abandoned, but have continually drawn in an ever increasing number of curious tourists intrigued by the destruction.

With the Mayon volcano dominating the skyline behind the ruins, it’s clear to see that Cagsawa has captured the imagination of visitors because of both its haunting history and dramatic position.

The Cagsawa Church was one of the first Catholic places of worship to be built by the Spanish in Bicol, a region of southern Luzon that they began to colonize after they first made landfall in 1567.

Franciscan Friars, looking to convert the local population of what is now known as the Bicol Region, began construction of the Cagsawa Church in 1587 to be a symbol of colonial authority and of their religion.

Although Mayon had erupted countless times in the past, locals, as they do today, would continue to move into the danger zone to make use of the fertile, ash-coated soil. Living in the shadow of the volcano is just a fact of everyday life for the people of Bicol, a fact that is as true now as it was in centuries past.

The Cagsawa Church was destroyed not just once, however, but twice, since its construction. The first destruction was not the cause of natural forces but was the work of Dutch marauders and pirates who were ravaging the coast of Luzon.

Through the 17th century, the Netherlands was a part of the Spanish Crown, and the Dutch spent decades fighting intermittently for their independence. On the other side of the world, Dutch marauders felt obliged to attack Spanish possessions in the Philippines and in 1636 the original church was burnt to the ground during a raid.

The church stood ruined for decades as the Philippines went through a tumultuous period of invasions and natural disasters before the eventual consolidation of power by the Spanish. It wasn’t until 1724 that Cagsawa Church was once more rebuilt.

The 1814 Eruption of the Mayon Volcano

Despite an ensuing period of relative stability, an impending disaster was looming on the horizon. Literally. In the background, Mount Mayon continued to rumble quietly, even erupting occasionally, its presence continually there.

In 1766, a large eruption occurred and many people from Cagsawa decided to relocate in the wake of this, despite the fact the village and church were unharmed. This would not be the case in the next large eruption, however, which was just a few decades away.

In 1814, Mayon blew its top spectacularly and violently. Cagsawa was not safe this time, as the largest eruption in its recorded history spewed ash and rock for miles around, while a huge pyroclastic lava flow hurtled down the mountainside at intense speeds.

In the village of Cagsawa below, the locals had enough time to realise what was happening. Such was the surprise and intensity of the eruption, however, they didn’t have enough time to escape the blast radius.

Those that could fled to the Cagsawa Church for safety, the solid stone walls being the only protection they could reach in time.

Unfortunately, the stone walls did little to help, and the eruption swept over Cagsawa, leaving the church and the village in ruins and killing over one thousand people.

After the eruption of 1766, many of the residents of Cagsawa were sufficiently scared of the power of Mount Mayon to move out of the village. Some of them moved a few miles down the road to Daraga, which today forms the larger municipality that encompasses the Cagsawa Ruins.

In 1772 the Spanish colonial government allowed the new residents to settle and to build their own place of worship, which still stands today as the Daraga Church, an impressive Franciscan church which has survived multiple eruptions, typhoons, earthquakes and wars since its completion in 1773.

After the 1814 eruption, the Daraga Church became a refuge for those who survived the deadly lava flows in Cagsawa. The church became the region’s primary place of worship and took in survivors and refugees, who would go onto settle in Daraga.

Cagsawa was left in ruins, never to be rebuilt again.

Today, the Cagsawa Ruins are perhaps the most iconic tourist attraction in Bicol, the Mayon Volcano itself aside.

The ruins are visited by thousands of tourists and have become a haunting reminder of the power of the volcano, and the precarious nature of the lives that are led and the homes that are built around its base.

Over the years, the ruins have fallen further into disrepair. The high walls that once stood next to the belfry collapsed after surviving the eruption, and now all that stands is the tower and random sections of stones, more piles of rubble than anything distinguishable.

The Cagsawa Ruins are now protected as an important piece of national heritage, but they will continue to crumble in the shadow of the volcano.

Location of the Cagsawa Ruins

Full Disclaimer: I travelled to Bicol as part of a Press Trip arranged by the Philippines Tourism Board in the United Kingdom. As always though, all opinions expressed in this article are my own.