The Rice Terraces Of Banaue 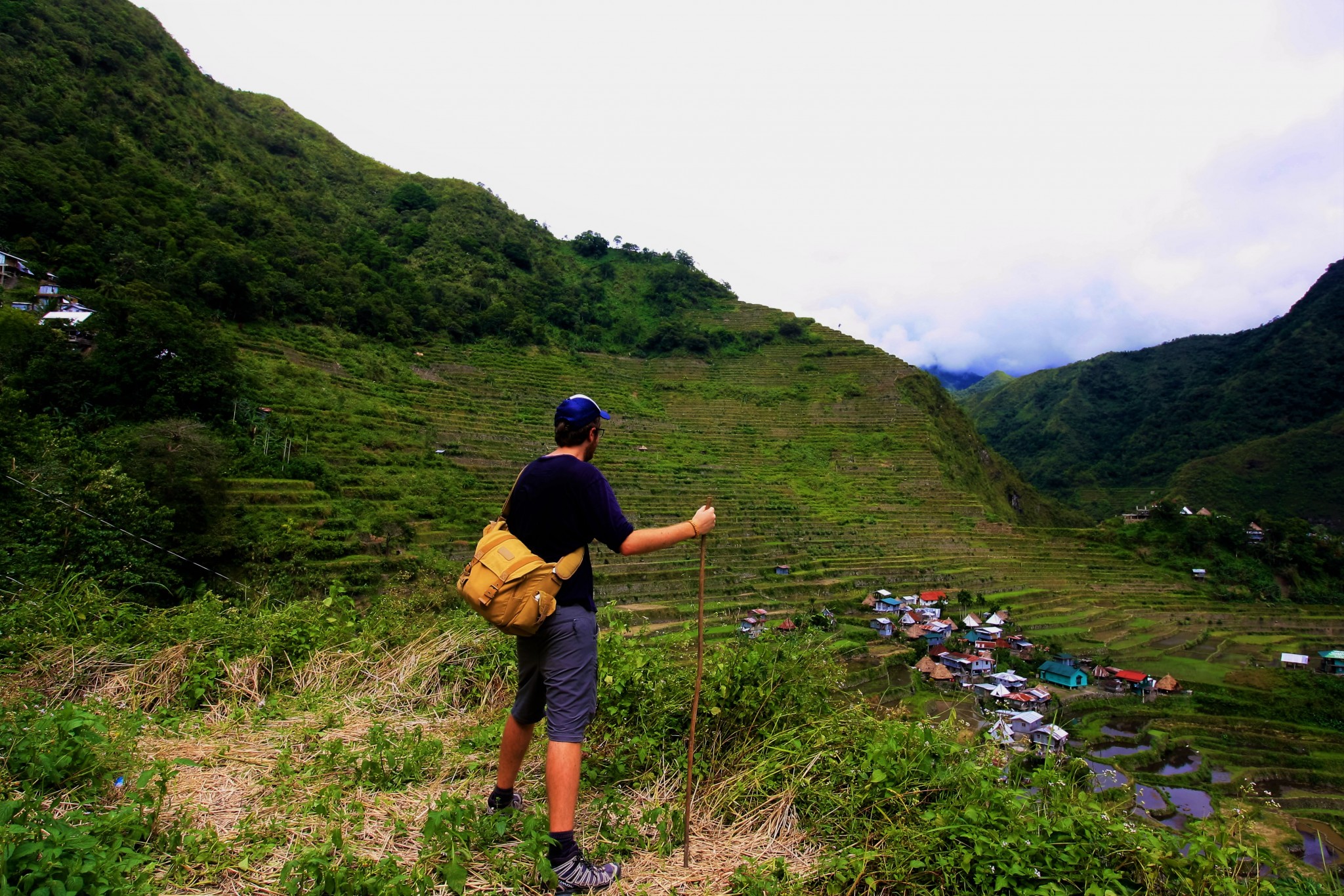 The Banaue Rice Terraces of the Philippines are a sight to behold!

Rice terraces?! What’s so exciting about a rice terrace I hear you ask. Well, have you seen the Banaue Rice Terraces in the Cordillera region of the Philippines? 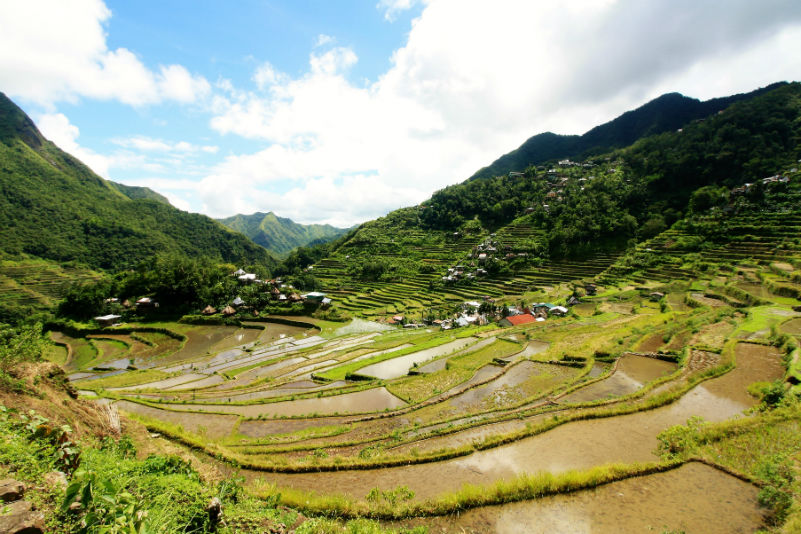 Cordillera is a region in the far north of the Philippines, on Luzon- the largest of the thousands of Filipino islands. I had travelled here with the Philippines Tourism Board, who were intent on showing me that the rice terraces are one of the most beautiful sites in the entire country, and that It’s more fun in the Philippines! And they weren’t wrong about either. 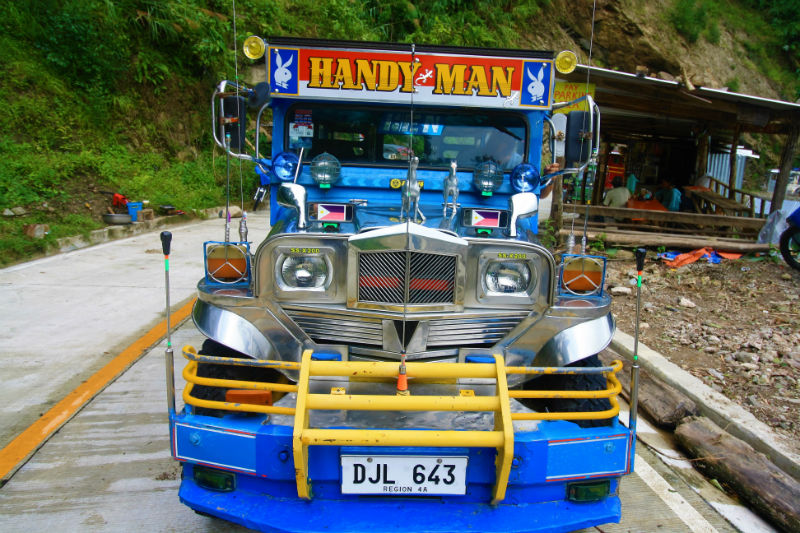 I set out with a group of travel bloggers and Youtubers from around the world, our transport to the terraces was in a Jeepney, the iconic beast of a truck which is the primary mode of public transport across the Philippines. The Jeepney is the King of the Road, each an individual masterpiece of mechanical and artistic engineering, and the only way to ride it was on top, local style. 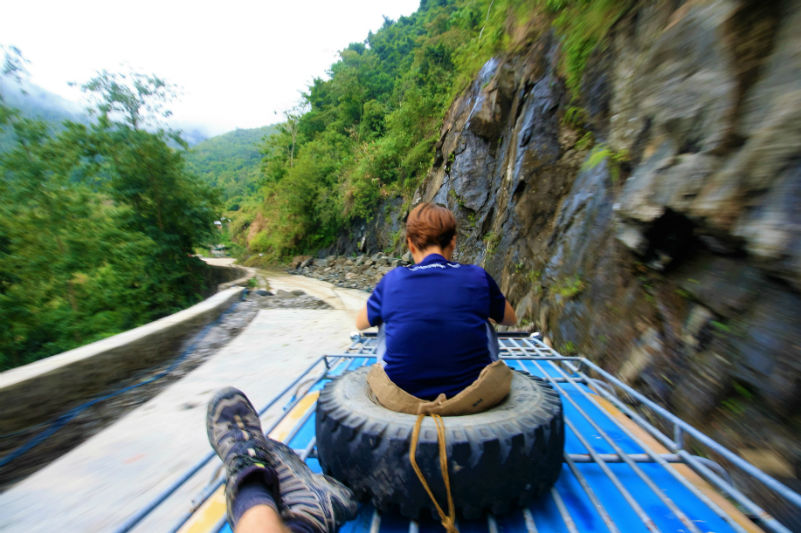 The Banaue Rice Terraces of the Philippines

The rice terraces of the Cordillera region are inscribed on the UNESCO World Heritage List. The jumping off point is the town of Banaue, and there are five separate villages in the region which are protected on the listing. I was heading specifically to the village of Batad, nestled in the mountains and home to an amphitheatre shaped scene of terraces. 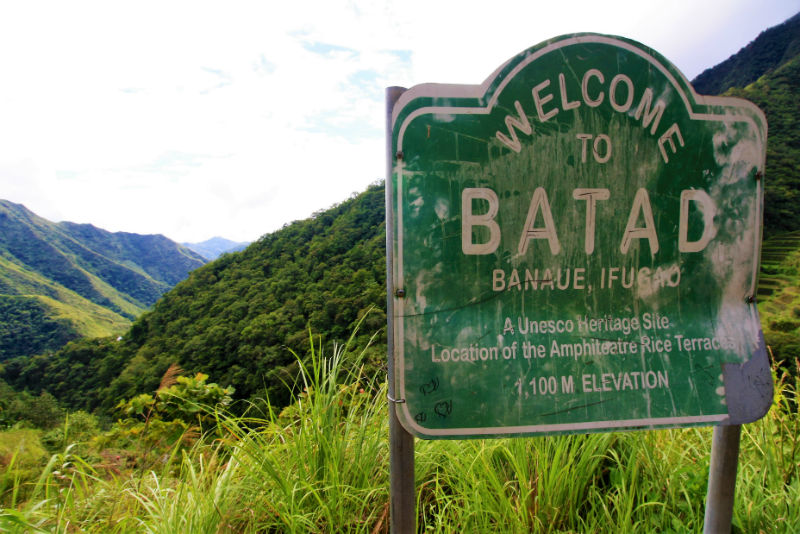 The drive through the winding mountain roads on top of the Jeepney was a rough but spectacular journey past rice paddies, crammed Jeepneys, and a few dangerous rock falls and landslides. Eventually the paved and pot holed road crumbled to an abrupt halt, and I dismounted to continue on foot through the forest. 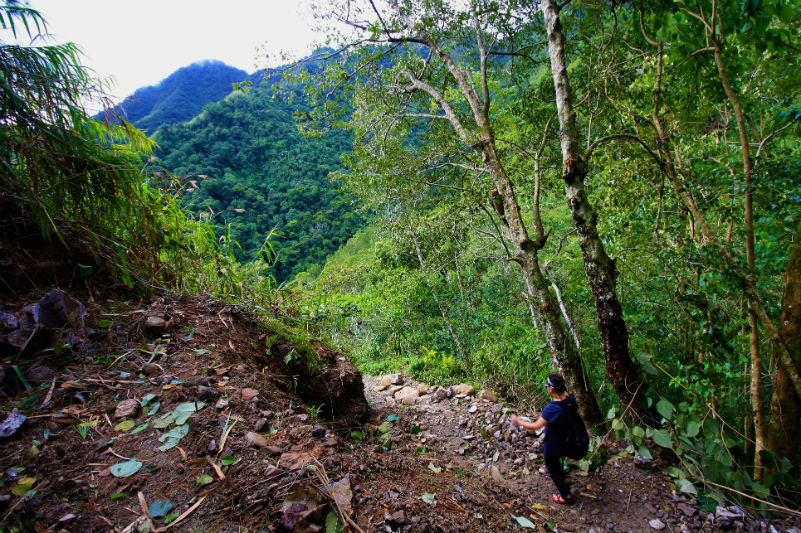 It’s cooler in the North than much of the rest of the Philippines, and the village was at an altitude of 1,100 metres, but that didn’t mean much to my pale English body as I walked out of the forest drenched in litres of sweat. As I wiped the perspiration from my eyelids with my ragged, watery t-shirt, the terraces unfolded below me. 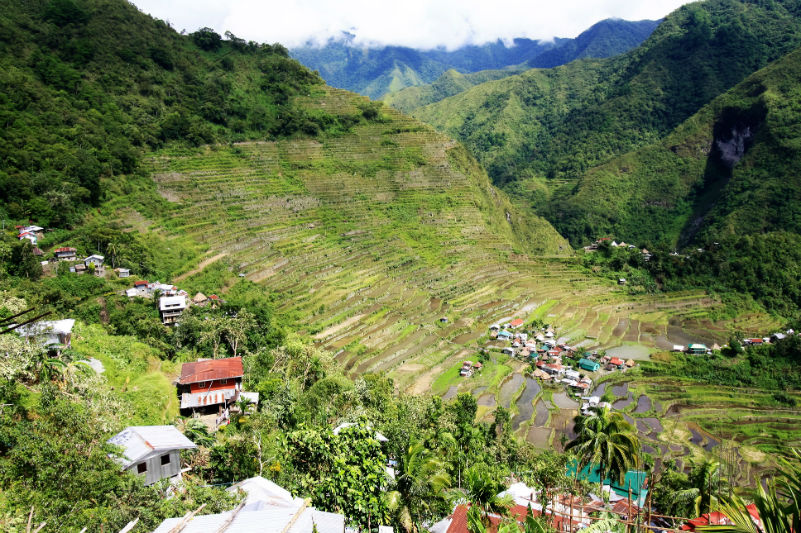 I wanted to relax with the dog on the veranda- this one knew how to live- but Dayton the local guide who hails from a nearby village was ready to take us straight down amongst the terraces, just as the sun was really starting to heat me up. 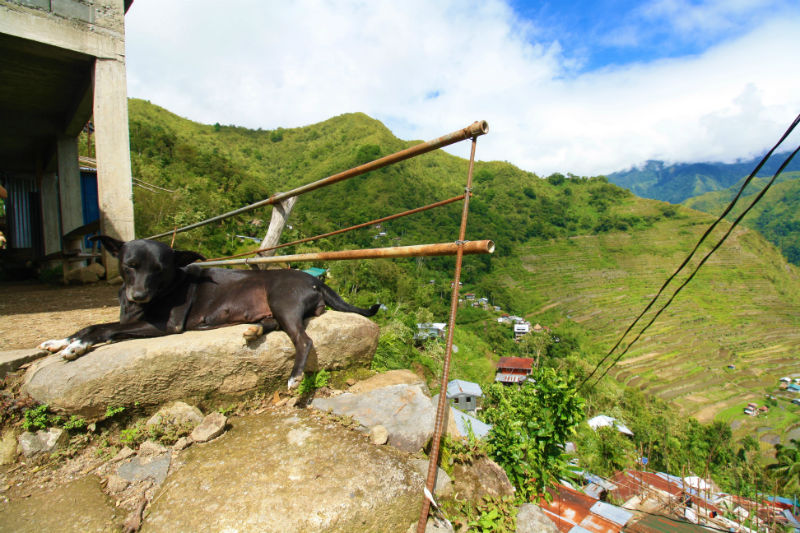 The rice terraces form an amphitheatre around the village of Batad- which is clustered in the bottom of the valley- although in recent years an expanding population and more visitors has seen the village extend upwards too. 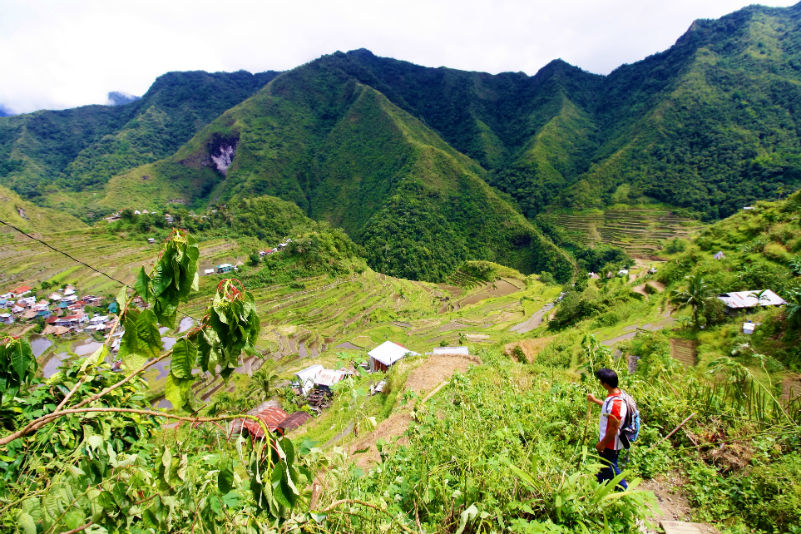 Dayton was leading us along the narrow, steep path which winds its way slowly down into the village. The path is made of small ledges of concrete which follow the verge of the rice paddies, and on the steepest sections the path becomes a simple jumble of rocks that drop downwards, a route that required careful navigation to avoid falling into the watery paddies either side. 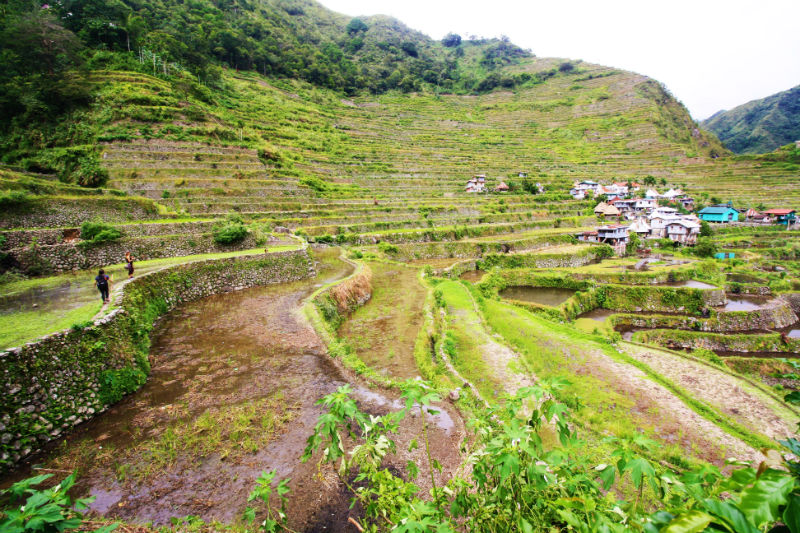 The route was only a few hundred metres or so, but with the climbing and circuitous nature of the walk it took a good half hour to get down into the village itself. 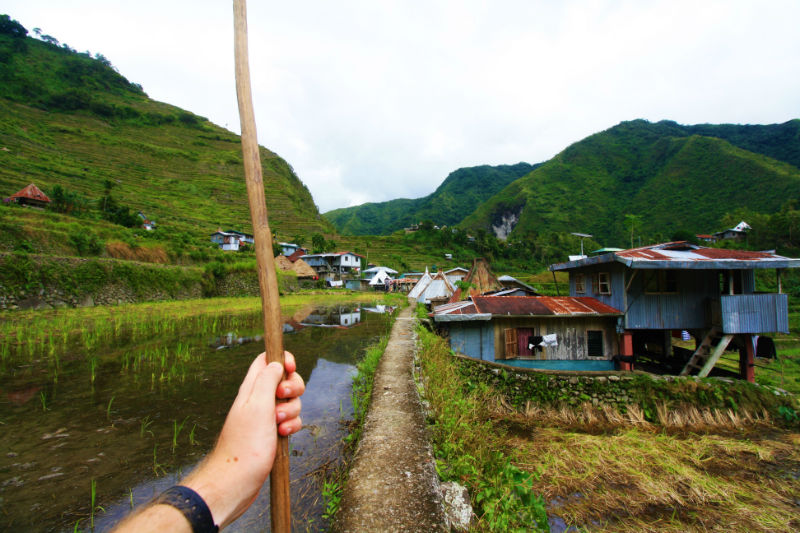 After a short recovery refreshment break, Dayton was leading us out of the village and this time upwards to see the view the terraces from the steep slopes of the opposing side. 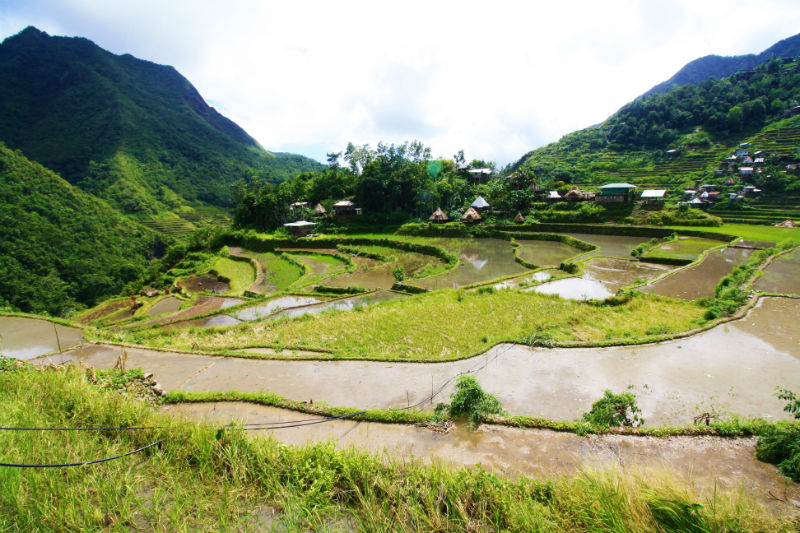 Upwards, to the terraces!

The terraces were built to give the villagers a method to farm rice in what is a ridiculously mountainous environment. The paddies are stacked on top each other, making use of the limited space in maverick fashion. 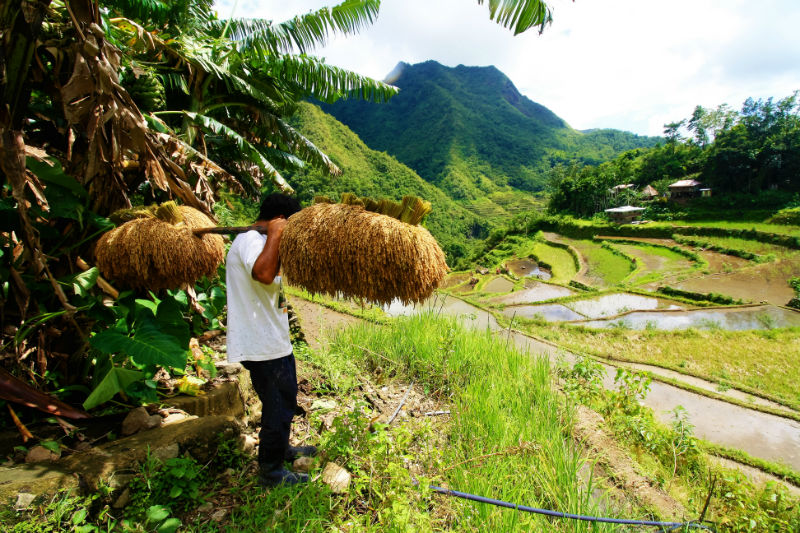 The local guys can run up and down the terraces with ease carrying kilo after kilo of race grains that have been harvested from their plots of land. 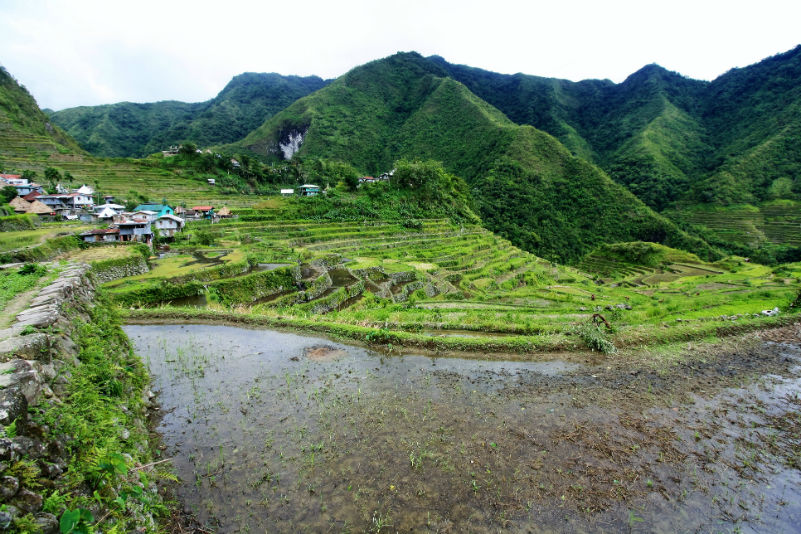 People have been farming here this way for 2000 years, and not much has really changed. The families own a few plots of land, a few rice paddies each, and most of what’s grown is kept and consumed, with a little being bartered and exchanged for other goods. It’s subsistence in nature. 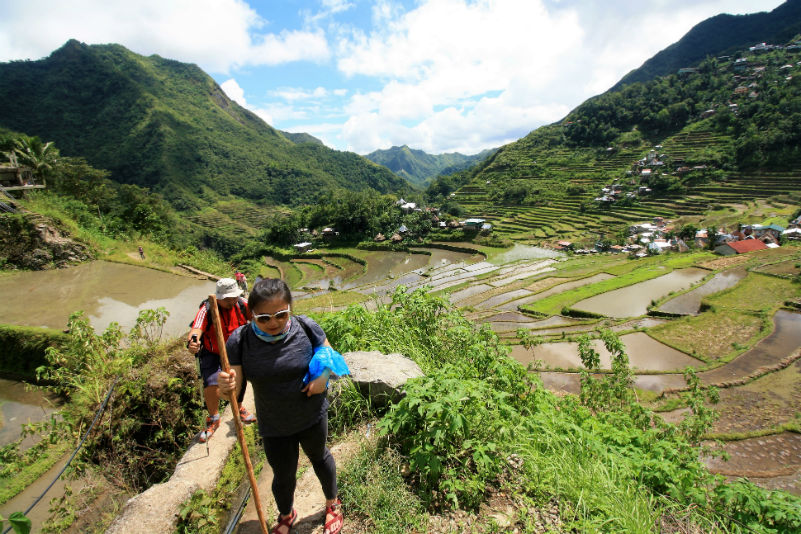 It’s hard work, for little gain. Each year, only one crop can really be harvested from a field, as the growing conditions and methods result in a lengthy farming and harvesting process that takes nine months to complete. 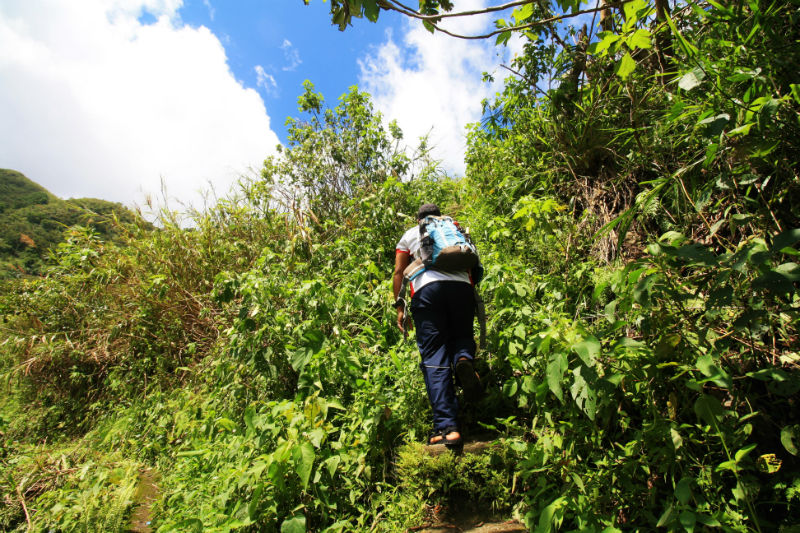 Things got near vertical as Dayton lead the group up from the basin of the village and onto the surrounding terraces. The sun was hitting mercilessly in the midday heat now, and the outlook was decisively sweaty. 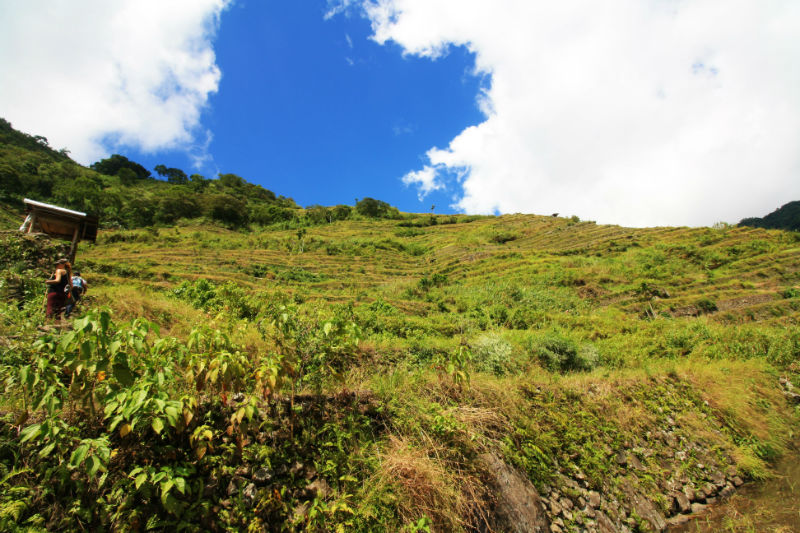 The path levelled out halfway up and dripping from head to foot I stood to catch my breath and to look out over Batad. 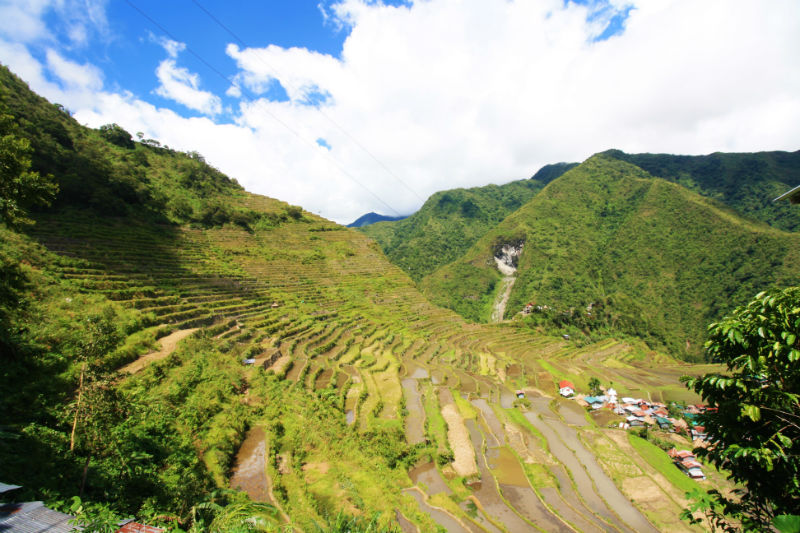 From here, half way up the terraces, it was an easy stroll back to the start point of the trail above the village and then through the forest to the waiting Jeepneys. 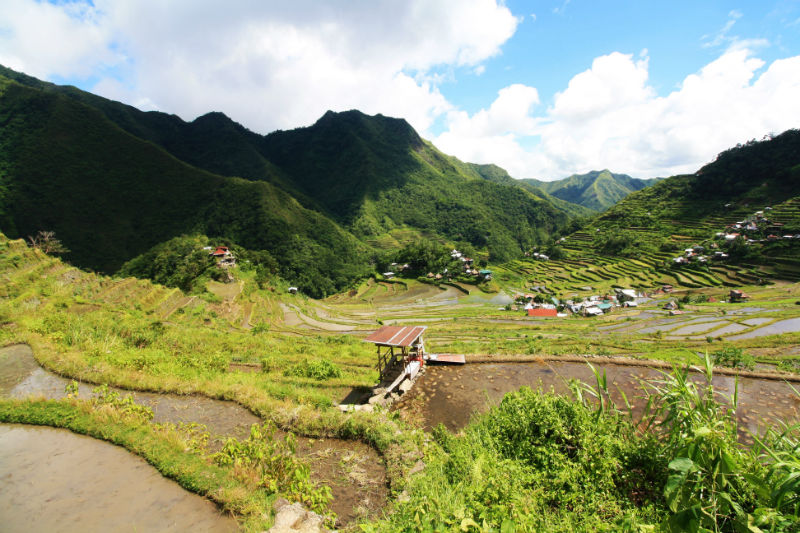 Later that evening, with aching legs and sunburned limbs, the guides from the Philippines Tourism Board who were showing us around gave us the news that Typhoon Lawin was approaching. The Philippines is prone to typhoons, and a few years back Typhoon Haiyan– known also as Super Typhoon Yolanda- wrought complete havoc. Now, Typhoon Lawin was being upgraded to a Super Typhoon, and had been given the most powerful rating of 5. There were fears that it could be as deadly as Typhoon Haiyan. Our flights back to Manila were already cancelled in anticipation of the storm, and the tourism board decided to evacuate us all by bus back to the safety of the capital rather than finishing the rest of the trip in North Luzon.

The typhoon hit. I was lucky enough to be able to get the hell out of there, but thankfully it wasn’t as destructive as predicted. People were still killed though. The Philippines is a beautiful country- as I saw at the Banaue Rice Terraces- but it’s also a country that’s continually subjected to the ravages of the natural world, on a scale seen in few other places in the world.

My trip to the Banaue Rice Terraces was sponsored by the Philippines Tourism Board, all views and opinions expressed are my own though! 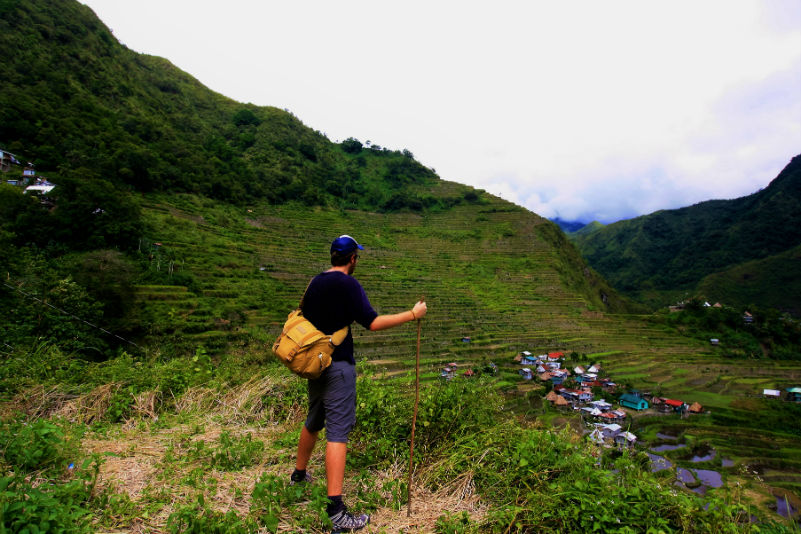 The Bamboo Musician of Malibcong

The Jeepney: The King Of The Road