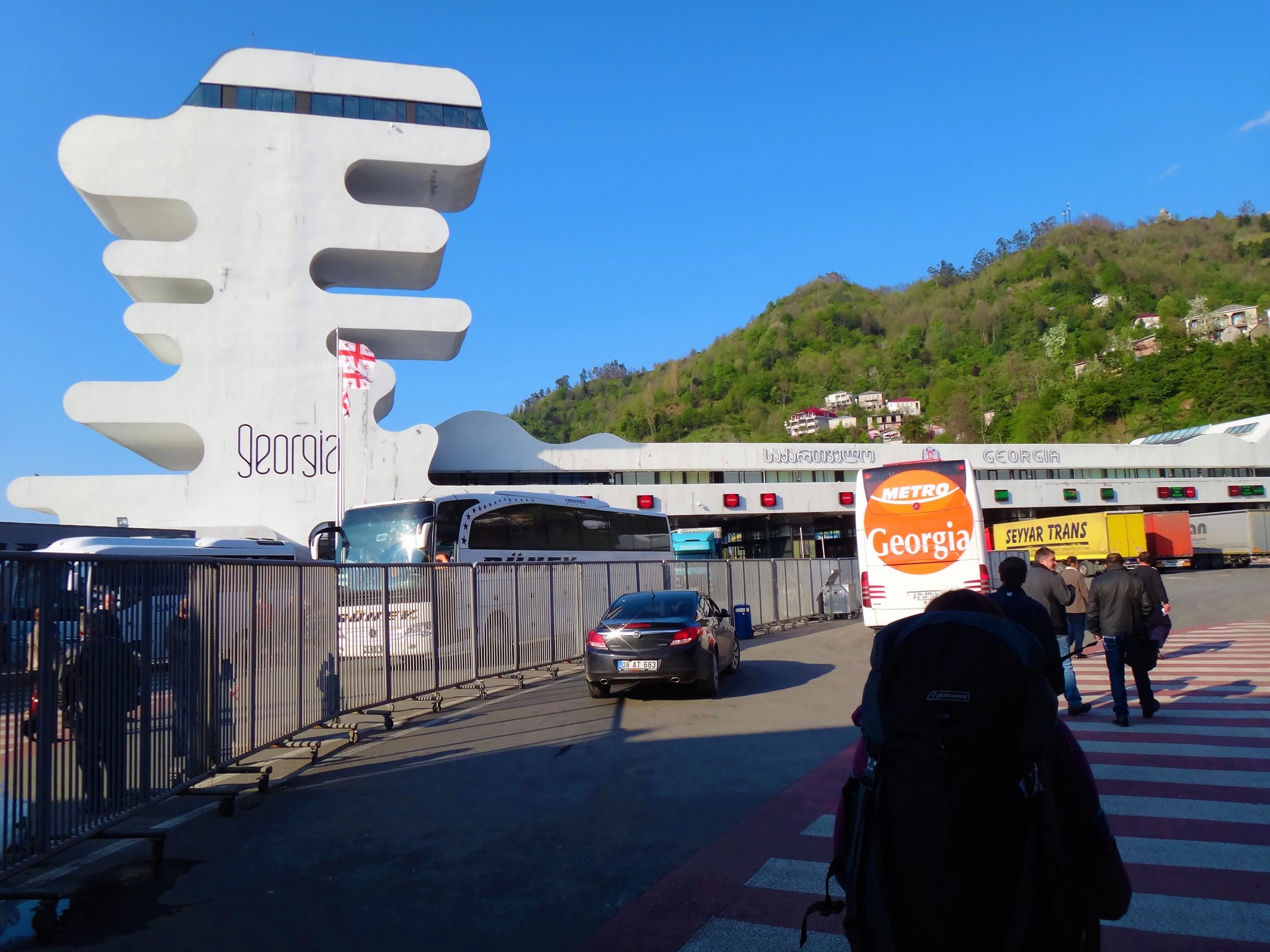 Read on to find out exactly how to cross the border from Sarpi to Batumi! And don’t worry, travelling from Turkey to Georgia is easy!

As far as international border crossings go, Sarpi is a strange one. The Georgians have constructed a huge, almost sci-fi like super structure to welcome you graciously into their country, while on either side of the demarcation line, holiday makers and locals spend the day relaxing on the pebble beaches and swimming in the waters of the Black Sea. 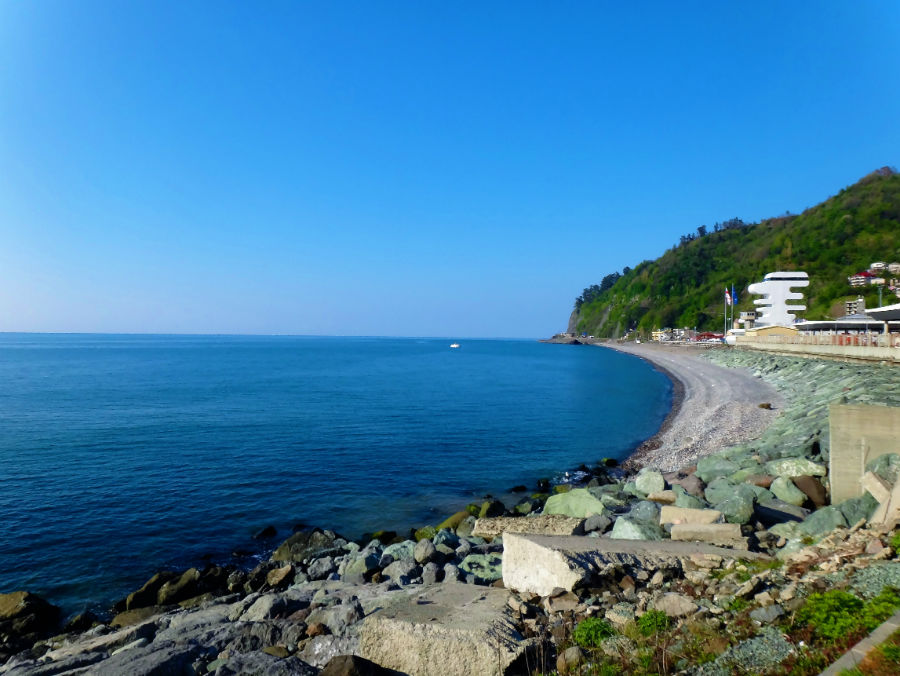 Here’s the details on how to make a successful crossing from Turkey to Georgia,  from Sarpi to Batumi!

I travelled from Hopa, via Sarpi, to Batumi in March 2016. So this information will be in that particular order. Obviously it’s a pretty similar situation in reverse if you are travelling from Georgia to Turkey.

Step one if you’re coming from Turkey is to get to the city of Hopa. This is the closest big city to the actual border, and from here you can catch a minibus down to Sarpi where the border crossing will take place. Minibuses travel down the main coastal road, and they tend to accumulate by the bridge which spans the river, before heading through the city and along the road to Sarpi. 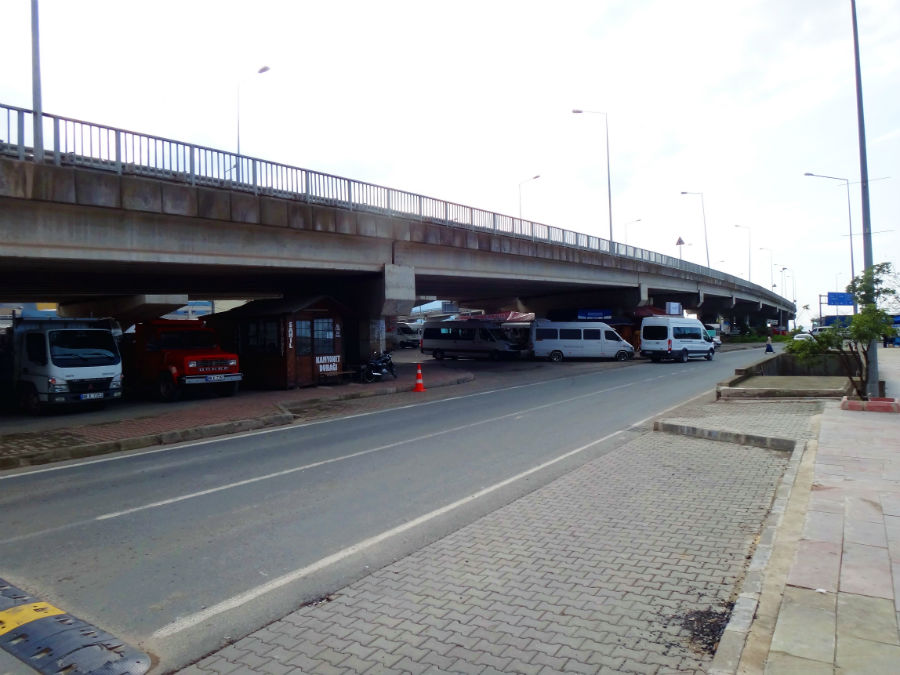 The minibuses congregate to the left there, while the bridge is on the right of the picture!

As with any minibus system, their is no schedule, they simply leave when the driver feels like it, or when they are full. You shouldn’t pay any more than 5 Turkish Lira for the ride which takes about 20 minutes. 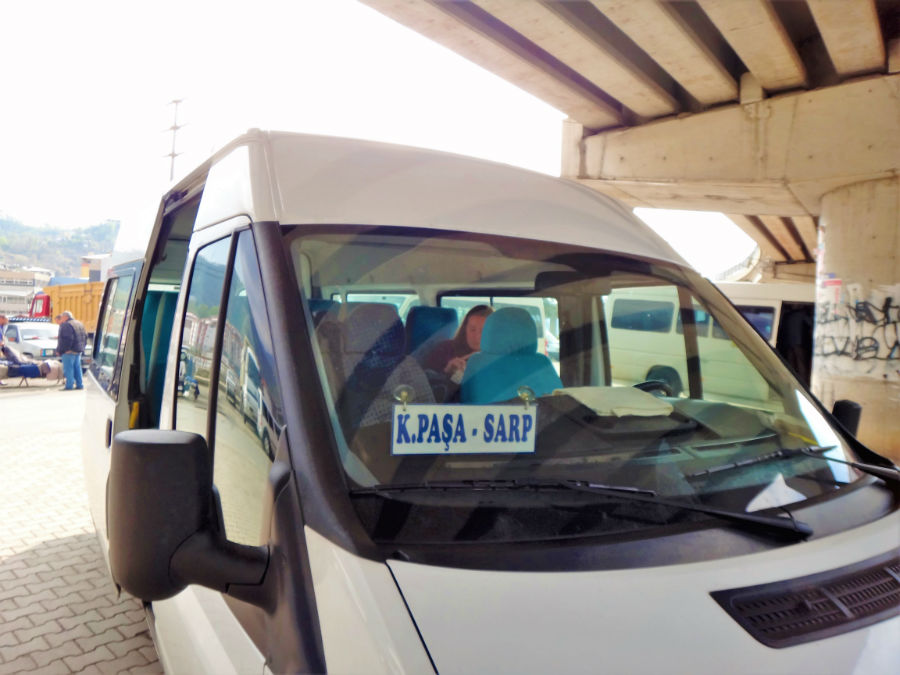 This is the transport you are looking for!

The minibuses depart from along the road- towards the coast- from the main Otogar (bus station!) labelled on the map below. Long distance busses start and end at the large Otogar.

Thing slowly become more Georgian the closer you get to the border! The minibus will take you all the way to the end of the line. There will be a huge quee of trucks, cars and busses waiting to head through. It can take hours I’ve been told, so the best bet is to walk through and catch another minibus onto Batumi on the other side. 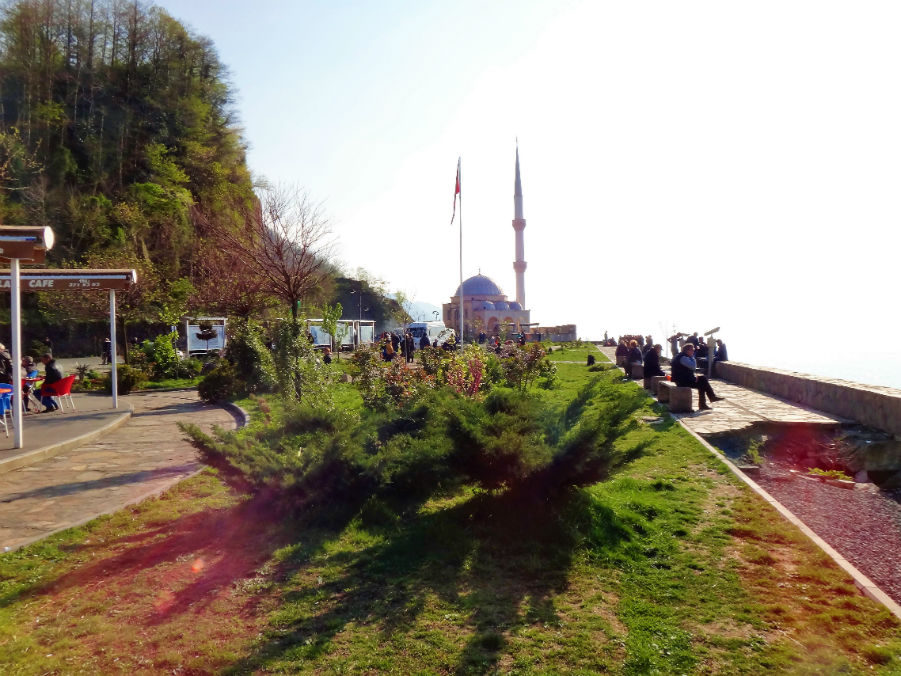 On the Turkish side, you’ll be dumped out by the beach. You can relax here as long as you want! Get some chai, and look out across the Black Sea towards Georgia. It’s rather beautiful. 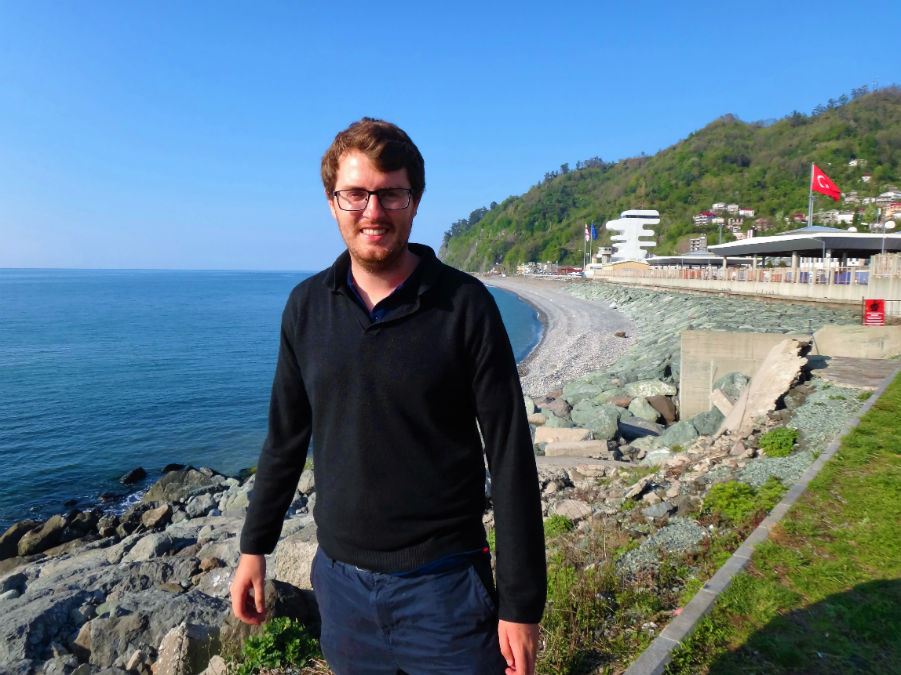 When you’ve had your fill of sunbathing on the international border, just walk on through, past all the waiting traffic, and follow the signs for pedestrians. You will head through a few walkways and buildings, and will eventually reach Turkish immigration. Here they will stamp you out, before you continue past the duty free and towards the Georgian immigration. It’s a bit of long walk, but just keep following the signs. 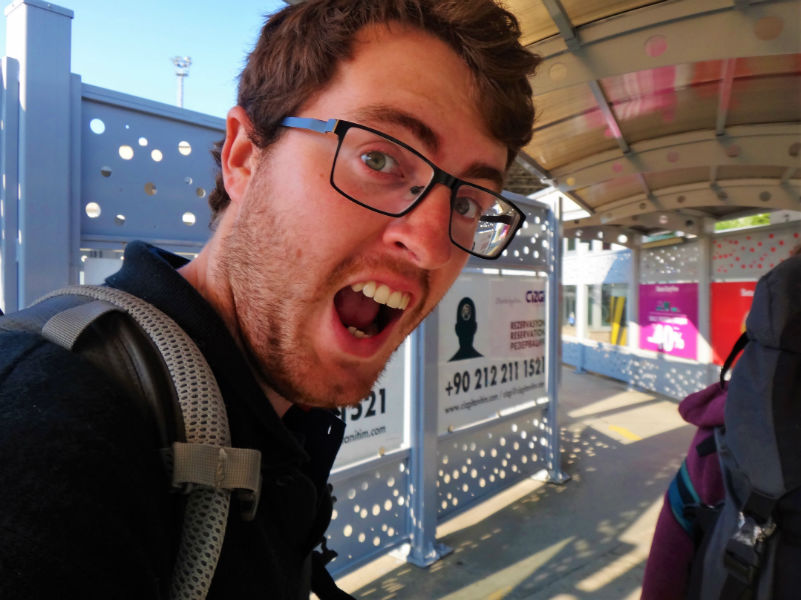 Once you’re through the Georgian section, you’ll put your bags through the scanners, and that’s it, you are in Georgia! There’s a small tourist information stand by the exit of the immigration hall. They can advise you on onward transport and hotels etc for Batumi. They can also give you maps! They are incredibly useful, so have a chat if you’re a bit lost. 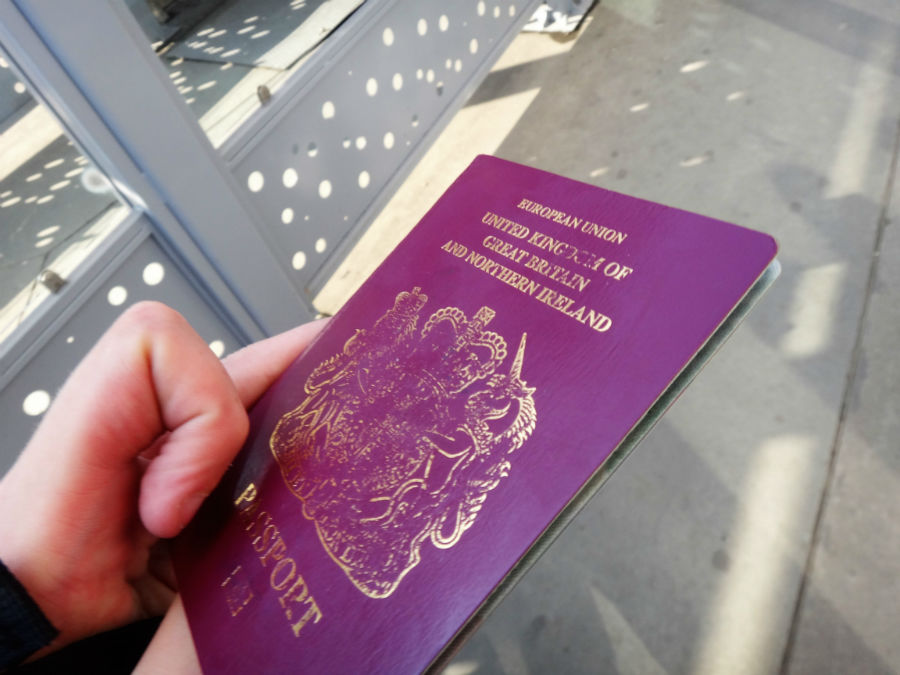 If you need cash, the only ATM until Batumi is in the immigration hall. Take cash out here if you need it, as the money changers outside give a terrible rate, and the guards refused to let me back in to use the machine once I’d left! If you have to, just change up enough money to get to Batumi, as the rates there are MUCH better!

Luckily, the minibus to Batumi only costs 1 Georgian Lari per person! It’s cheap, and takes about 20 minutes to get to the city centre. Jump out on the main road which runs along the top of the city, or you’ll end up at the bus station which is quite a walk away from the centre itself.

Always check for up to date information on government websites, as the visa situation can change rapidly! Currently, European Union citizens and much of the rest of the world can get a one year visa on arrival for free on entry to Georgia! That’s right, it’s simple and easy! For Turkey, most nations can apply for the online e-visa before you arrive into the country. You can do that HERE!

That’s how to travel from Turkey to Georgia!