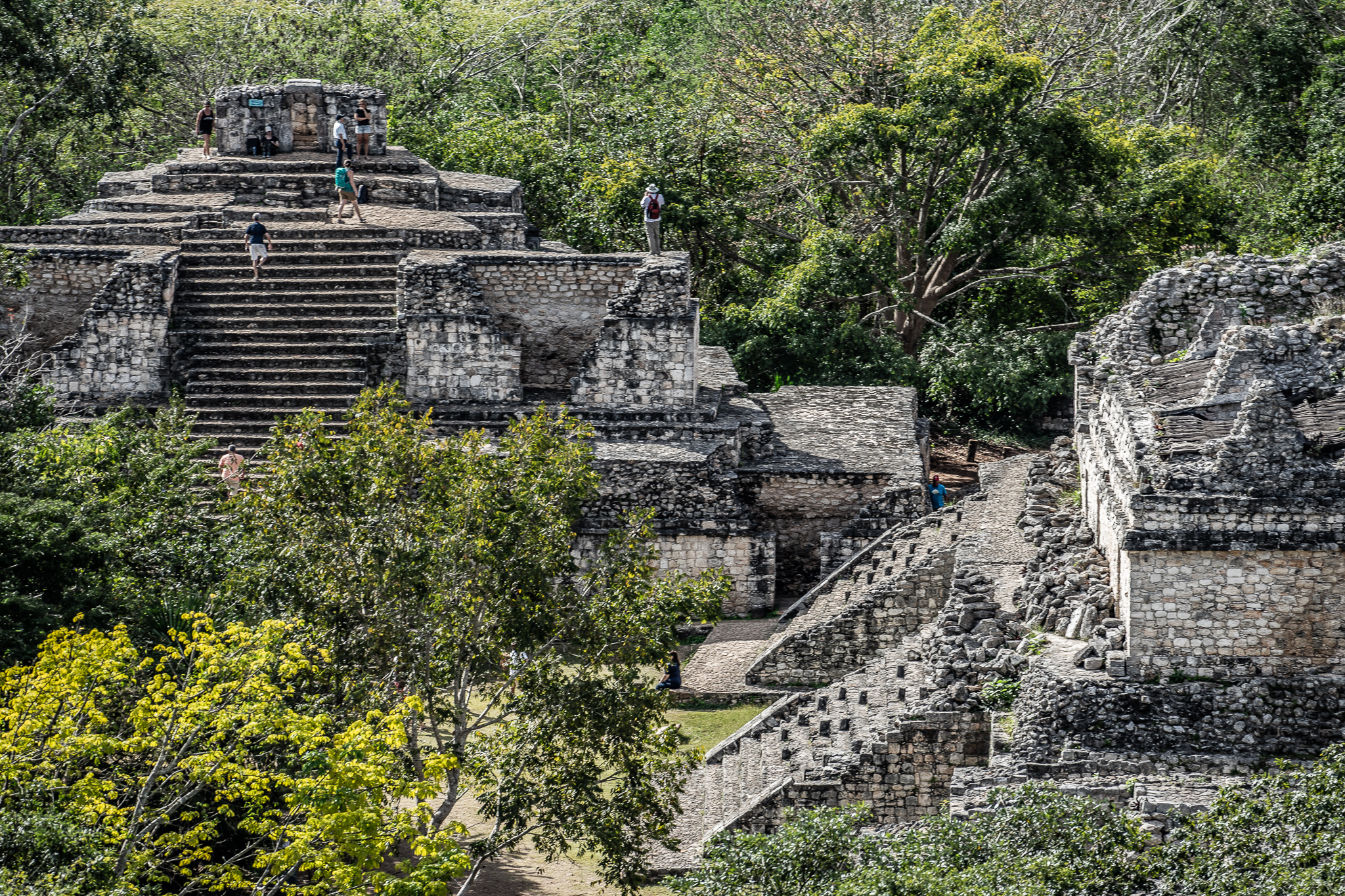 On a good day, from the top of the ruins of Ek Balam, you can see El Castillo, the central temple of Chichen Itza rising above the trees in the distance.

It’s just 50 kilometres away, across dense swathes of jungle, but compared to the restored and well-known temples of Chichen Itza, Ek Balam is overgrown and quiet. The Maya city was abandoned hundreds of years ago, and in the centuries since, it’s been reclaimed by the jungle.

Unlike the more popular, and much more crowded Chichen Itza, Ek Balam has remained largely unexcavated and has escaped the mass tourism and the stream of tour buses seen at its counterpart to the south.

For me, that made the Maya ruins of EK Balam a much more enticing destination to visit when I was exploring the Yucatan peninsula.

Ek Balam is an ancient city, that at its peak was home to around 20,000 people, with temples and ball courts to rival anywhere else in the Maya world. This was the centre of a kingdom, where the local elite and the nobles built lavish homes, buried their kings in lavish tombs and raised tall temples in honour of their gods.

The area has long been populated by humans, but the city began to truly flourish in the 8th century AD when most of the large structures that are found here today were constructed, at a time when Ek Balam had grown into a regional power and its economy was booming.

From the 9th century AD onwards though, Ek Balam fell into decline as Chichen Itza became the dominant power in the Yucatan. Then, Ek Balam was almost completely abandoned during the Maya collapse that followed in the next centuries.

By the time the Spanish Conquistadors arrived in what is now southern Mexico, aside from small, rural communities in the area, Ek Balam had already been swallowed again by the jungles.

An Abandoned City in the Yucatan Jungle

There are many different theories surrounding the Maya collapse, and the abandonment of cities across southern Mexico and Central America before the arrival of the Spanish.

When the Spanish landed in the region in the 16th century, Maya power had shifted to different regions and cities, and ancient cities such as Chichen Itza and Ek Balam were all but abandoned.

By this point, Chichen Itza had already been excavated, with work beginning almost a hundred years earlier than at Ek Balam. Even today, only a small number of structures within Ek Balam have ever been excavated, and much of the city still lies hidden under the weight of the forest.

This is one of the reasons why Ek Balam has never seen tourism on the same scale as Chichen Itza and visiting today, you can almost imagine what it would have been like to first stumble across the ruins here, lost and crumbling amongst the dense trees, foliage and intense humidity of the Yucatan.

The Acropolis of Ek Balam

The centre of Ek Balam is the main area within the city that has been excavated, and here you can find the towering shape of the Acropolis.

It’s thought that the temple was buried by the Mayans themselves when Ek Balam was abandoned, and for this reason, the inscriptions and finds made here by archaeologists have proven to be of exceptional quality and in an exceptional state of preservation.

The Acropolis was built to be the tomb for a king, a king who ruled at the height of Ek Balam’s power in the late 8th century. The steep stone steps of the temple can be climbed, and after a sweaty struggle to the summit, you can look out across the jungle, where you can try to spot Chichen Itza to the south.

Arrayed directly below you, will be smaller temples, the ball court, and other structures that formed the city centre of Ek Balam. Hidden by the jungle all around, are the crumbling, earth-covered mounds of and ruins of the rest of the city, still waiting to be revealed after hundreds of years.

The Yucatan peninsula is full of thousands of cenotes, water-filled sinkholes that the Mayans saw as sacred. Cities were built beside cenotes, which could provide freshwater and were used in religious rituals.

Ek Balam was no exception, and a short walk along a dusty path that’s been cut through the jungle will bring you to Cenote X’Canche, a magnificent sinkhole that’s filled with turquoise water.

While sinkholes were sacred to the Maya, today they are mainly used for recreation and to cool down. At Cenote X’Canche, you can swim in the cold water, and you can even swing along zip lines or abseil down the rock. After a sweaty, dusty day of exploring the ruins of Ek Balam, it’s the perfect spot to wind down at.

How to Travel to Ek Balam

Ek Balam is located just north of the city of Valladolid, in the southern Mexican state of Yucatan. Valladolid is just a half hour drive away from the ruins, and there are shared taxis regularly departing from the city centre.

These shared taxis cost 50 MXN per seat each way, or 200 MXN if you want to hire the whole vehicle. You wait for the taxi to fill up and then it departs, dropping you at the entrance to Ek Balam. On the way back, you simply wait at the same point for a return ride.

The taxis depart from a small depot on Calle 44, between Calle 35 and Calle 37, just a short walk from the central bus terminal. Look out for Hostel La Candelaria on the map, and you’ll find the stop. If not, just ask around for Ek Balam and you’ll soon be pointed the right way.

I’d recommend starting early, as the taxis can take a while to fill up, due to the fact that not too many travellers actually make this journey. Entrance to Ek Balam costs 216 MXN, and entrance to Cenote X’Canche is an extra 50 MXN.

Cenote X’Canche is 1.5 kilometres away from the central ruins, and you can walk or hire a bicycle to make the short journey. There are lockers and changing rooms by the cenote, and you can pay extra to try out the zip lines.

Valladolid makes a good base from which to visit Chichen Itza too, especially if you want to get in early and avoid the crowds. There’s plenty of accommodation in the city, and good bus connections to Cancun, which is 2 hours away to the east, and to Merida, which is 2 hours to the west.