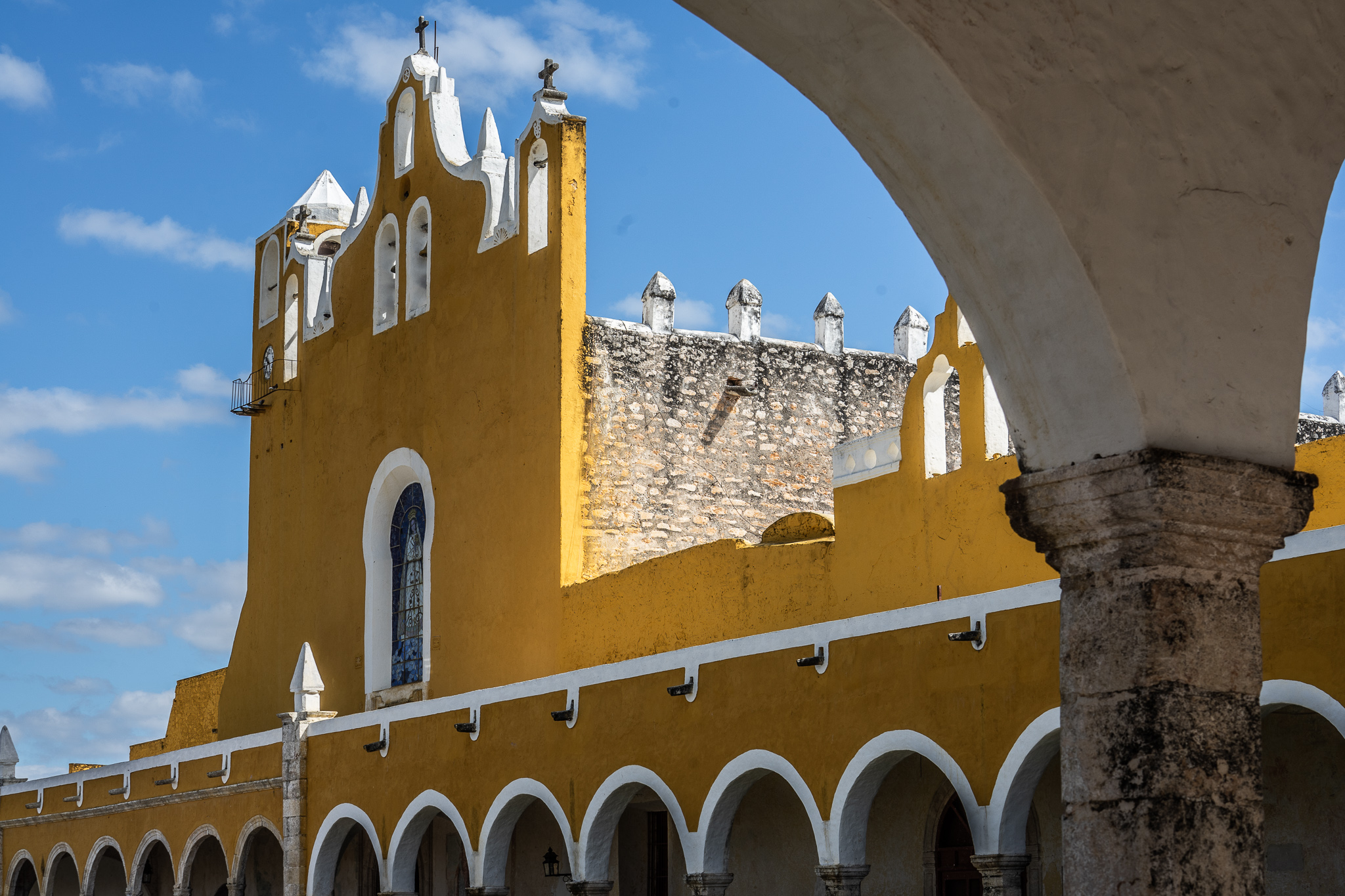 It was all yellow. The city, it was completely yellow.

This was Izamel, a Spanish colonial town built on top of an ancient Mayan settlement that had been conquered and colonised in the 16th century by the Conquistadors on their way through the Yucatan, in what is now southern Mexico.

Before the Spanish arrived, this was a thriving Mayan stronghold, but after the conquest, the Mayan city was torn down. Temples were replaced with Catholic churches and Mayan houses were turned into colonial structures. And then, everything was painted yellow.

This was ‘The Yellow City’.

I was travelling through southern Mexico, and I’d heard that not far from Merida, was a city that had been built on top of a Mayan town. Churches had been built on the temple mounds by the Spanish and everything had been, quite literally, colonised.

I’d also heard that Izamal Yucatan was entirely yellow. Or as yellow as a city could really ever be. From Merida, I hopped onto a local collectivo minibus to find out if anything of the former Mayan town remained in Izamal, and to see if everything eally was all yellow.

The Mayans have had an unfortunate history. For the most part, tourists in southern Mexico will visit the classic Mayan ruins, such as the iconic temple of Chichen Itza or the crumbling seaside fortifications of Tulum.

These are the ruins that are associated with the Mayan civilization, and most were abandoned long before the Spanish ever arrived. The classic Maya civilization collapsed around the 8th century, leaving behind huge swathes of abandoned land and cities. But that was far from the end of the story.

While the Mayan people never built such huge temples again, they had far from disappeared, and the Yucatan, particularly the areas around Merida and Izamal, was still home to large cities and large populations when the Spanish arrived in the 16th century.

The Conquistadores conquered the peninsula, and rather than creating new cities, at first they simply built right on top of the existing Mayan settlements. It’s thought that Merida is one of the longest, continually inhabited cities in Central America, while Izamal has similarly been inhabited for just as long a period human history in the region.

Izamal though, despite being turned into a Spanish colonial town, somehow managed to preserve the crumbling vestiges of its Mayan temples, even if many were turned into churches. However, it’s still one of the few Yucatan cities where you can still see Mayan architecture alongside colonial architecture because some temples did survive

Despite the bright yellow architecture and huge Christian churches built on the highest temple mounds, Izamal is still very Mayan, at least under the surface. If you listen in the streets, you’ll hear a string of different regional dialects and languages, not just Spanish, and when I arrived in the main square, an indigenous rights group were protesting against government policies towards locals.

The Spanish arrived in Izamal in the mid 16th century, to find a bustling town that was a centre for pilgrimage in the region.

The tall hills that surround Izamal were the site of Mayan temples, and the first thing I saw in the city centre was the main, central church, which was built over the Mayan temple that the Spanish found here.

I walked up the steep steps to the entrance way to Convento de San Antonio de Padua, the Catholic place of worship that the Spanish built to replace the Mayan one that was torn down.

Like everything else in Izamal, the walls were a bright shade of yellow. The hill the convent is built on though was not a natural feature. It was the Mayans who built the hills over centuries, and the temple on top that the Spanish found was just one layer of construction.

The convent then was built directly upon a Mayan temple and not just from the rubble.

The Mayan Temples of Izamal

Izamal is also known as ‘The City of Hills’, because of the distinctive hilltops that surround the centre. All of these are in some way Mayan made. What the Spanish had thought were natural mounds, were actually incredible, and ancient feats of engineering.

A short walk from the convent, I found the ruins of Kinich Kakmo, a Mayan temple built on one of these huge hills. This temple survived the colonial era and is today one of several Mayan temples that can be seen around Izamal Yucatan.

A short but steep hike up crumbling masonry brought me to a huge plateau, where the main temple still stood. Another steep hike upwards and I was standing atop Kinich Kakmo, looking out over the yellow city below.

A quick walk through more yellow streets and I soon found more Mayan temples, all surrounded by yellow colonial housing but unmistakable up close.

The Colonial and Mayan Worlds

Izamal always continued to be a Mayan pilgrimage site, even after the adoption of Catholicism under Spanish influence. Churches replaced temples, but the form of Catholicism adopted retained many important aspects of the pre-Colombian religions and continues to do so today, creating a fusion of Spanish and Mayan culture and religious practices.

Izamal is a strange mix of colonial and Mayan. At first, it seems like a distinctly Spanish town, brightly painted in yellow, with distinctive churches and central plazas.

But when I realised that those churches are constructed upon ancient Mayan temple mounds and that within walking distance of the centre there still are Mayan ruins, my perception of the city changed entirely.

As I left Izamal, the indigenous protest was still loudly continuing in the city centre. The Spanish may have built over the Mayan town, but in many ways, Izamal Yucatan is still very a much a centre of modern Mayan history and culture.