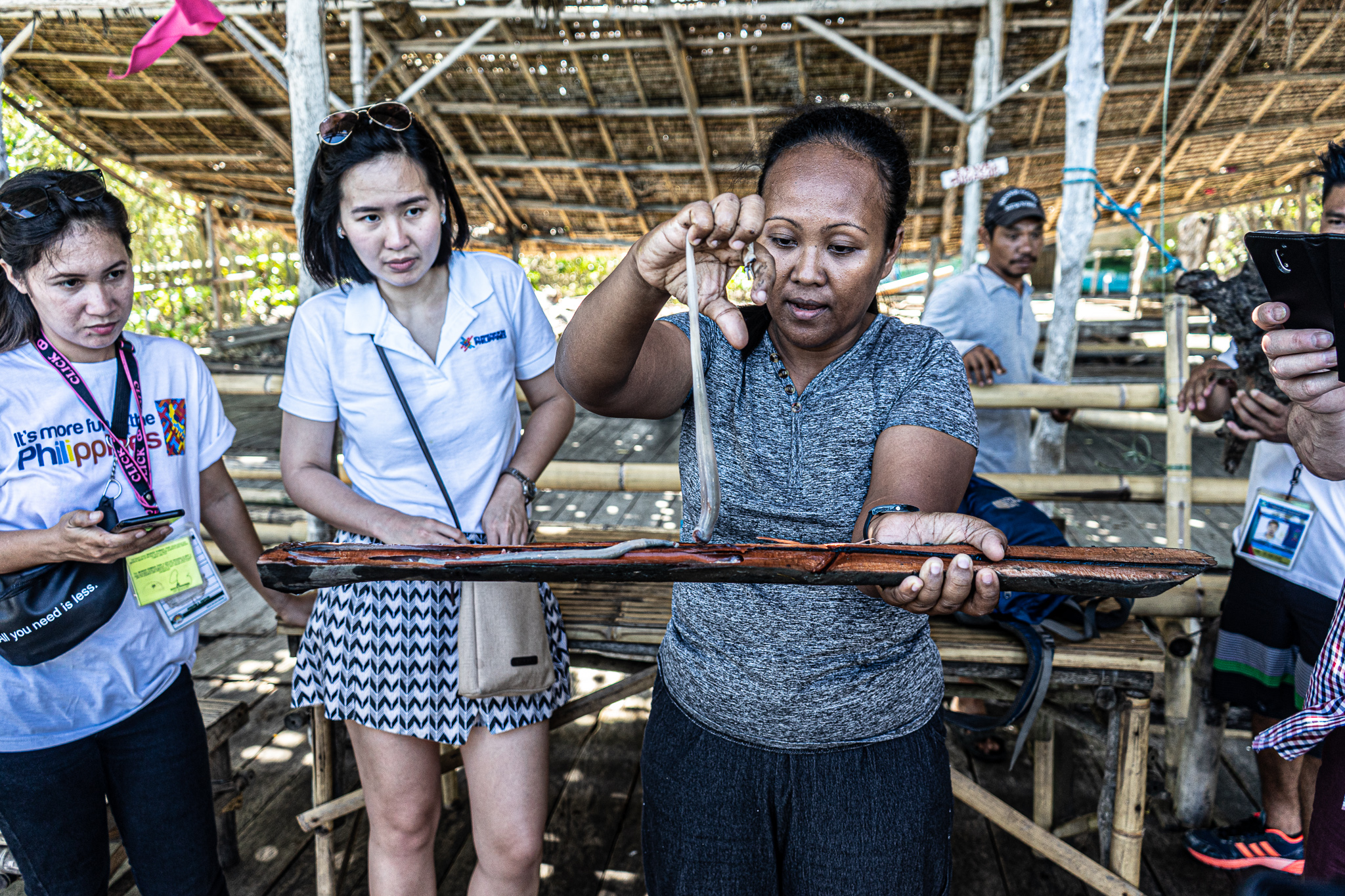 “It tastes like chicken”, says Rey as he leads our group through the dense mangroves towards a Tamilok cultivation farm along the coast of Panay, in the Philippines.

“It tastes good with vinegar”, he adds, as we make our way over rickety bamboo bridges towards a rustic seafront cafe in the middle of the nature park that serves up Tamilok, a Filipino speciality.

Tamilok, considered by many in the Philippines to be a delicacy, is part woodworm, part oyster. And I was about to discover if this ‘delicacy’ really did taste like chicken, or something utterly different.

Tamilok is an unusual delicacy, but in the Philippines, unusual is just par for the course when it comes to Filipino food. Tamilok is often counted amongst the nation’s more bizarre foods – bizarre, of course, for a sensitised Western appetite – and it would rank up there amongst the other Filipino ‘delicacies’ I’ve tried during my travels across the archipelago.

There’s Balut, the intense Filipino snack and energy booster – some say an aphrodisiac too – which is composed solely of a boiled egg. Except, its not just any duck egg. In this case, the duck has already begun to grow inside the shell.

Then there are Adidas and Helmets. These frightening grilled meat items are Chicken Feet and Chicken Heads, respectively, because when it comes to food, in the Philippines, absolutely nothing goes to waste as it might in other parts of the world. Every part of the animal, indeed, every creature, has its uses here.

Balut is crunchy, and as with every dish in the Philippines, it’s best served with vinegar. Adidas and Helmets are also particularly crunch, and again, they are best served with vinegar. Rey, our tour guide through the culinary world of Panay island, was, of course, suggesting vinegar to accompany the Tamilok that he was arranging to be sourced by the local cultivators.

Tamilok, however, is nothing like Balut, Adidas, or even Helmets. It’s definitely not crunchy, for starters. Tamilok is a different level of bizarre. And I was about to eat the freshest – well, the only – Tamilok I’d ever seen.

Tamilok is often described as woodworm. That’s because these Tamilok will burrow their way into deadwood when it’s below the waterline in the ocean. They are found along the coast and have long had a fearsome reputation amongst sailors for boring huge holes into wooden ships.

But calling a Tamilok a woodworm is a bit of a misnomer because they aren’t like any traditional woodworm you might have come across. They aren’t exactly like most traditional worms either, particular those of the earthworm variety.

“Tamilok are actually Oysters”, explains Rey. “Or at least, they are part of the wider Oyster family”.

But again, Tamilok aren’t like any oyster you might have ever seen before. Paradoxically, they probably look more worm-like than oyster-like. All that’s certain, is that this strange, woodworm-oyster is certainly intriguing. And the question was, would this unusual woodworm-oyster really taste like chicken, as Rey so confidently suggested to his unwitting tourists?

Tamilok are found living amongst the mangroves, which is why Rey had led us into the Bakhawan Eco-Park along the Panay coast. It’s a large mangrove forest close to the city of Kalibo, a place normally seen as a transport hub for the infamous island of Boracay, rather than a harbourer of unique culinary delicacies.

Tamilok love to bury into deadwood. In fact, it’s how they survive. And a mangrove park provides the perfect conditions and environment for them to be cultivated.

“The Tamilok live in the deadwood of the mangroves”, Rey explains. “That’s why they are called woodworms”. In Bakhawan Eco-Park, the locals are cultivating a variety of creatures, from crabs to fish, but their prized farm is that of the Tamilok.

“The deadwood of the mangrove tree becomes the shell of the Tamilok”, Rey tells us, as the Tamilok cultivators bring over a large piece of a mangrove tree, one that’s presumably home to a Tamilok.

Tamilok are closely related to oysters and clams, with one big difference. They don’t have a shell. That’s why the Tamilok burrow deep inside the dead mangrove branches because then they have the protection and sustenance they need while they float in saltwater.

Because the dead mangrove is the Tamilok’s shell, however, once it’s removed from the mangrove branch, that’s it for the Tamilok. They perish as soon as the cultivators split open the wood, and they are exposed to outside conditions.

As the vinegar is prepared and I wonder what the Tamilok is going to look like, let alone taste like, one of the local cultivators take a hefty swing with his axe at the piece of dead mangrove wood.

With one blow to the top, he splits it deftly down the middle, before cracking it in two. He passes over the split branch, revealing to us for the first time, the Tamilok.

It’s long, and undoubtedly slimy, having grown the length of the branch that it was living within. Preparation of the Tamilok is simple. It’s washed in freshwater, while small dipping bowls of vinegar and chilli sauce are prepared on the side.

This is Ceviche-style, or in the Philipines, Kinilaw. The Tamilok is eaten raw, with a dash of lime, before being dipped into the vinegar or chilli sauce. It’ straight from the sea, so there’s no need for extra salt seasoning.

Tamilok can grow to over a foot in length, and I’m handed a long, slimy length to eat by the lady preparing the delicacy by the mangroves. It’s best just to swallow, after dipping, I’m told.

In fact, it tasted almost like an oyster. Almost, but not quite. A delicious, if extra salty and overly slimy oyster.

“It’s full of energy and protein”, Rey says as I eat more Tamilok. “It’s an aphrodisiac too, just like Balut”.

Hiking To The Top Of Mount Tapyas