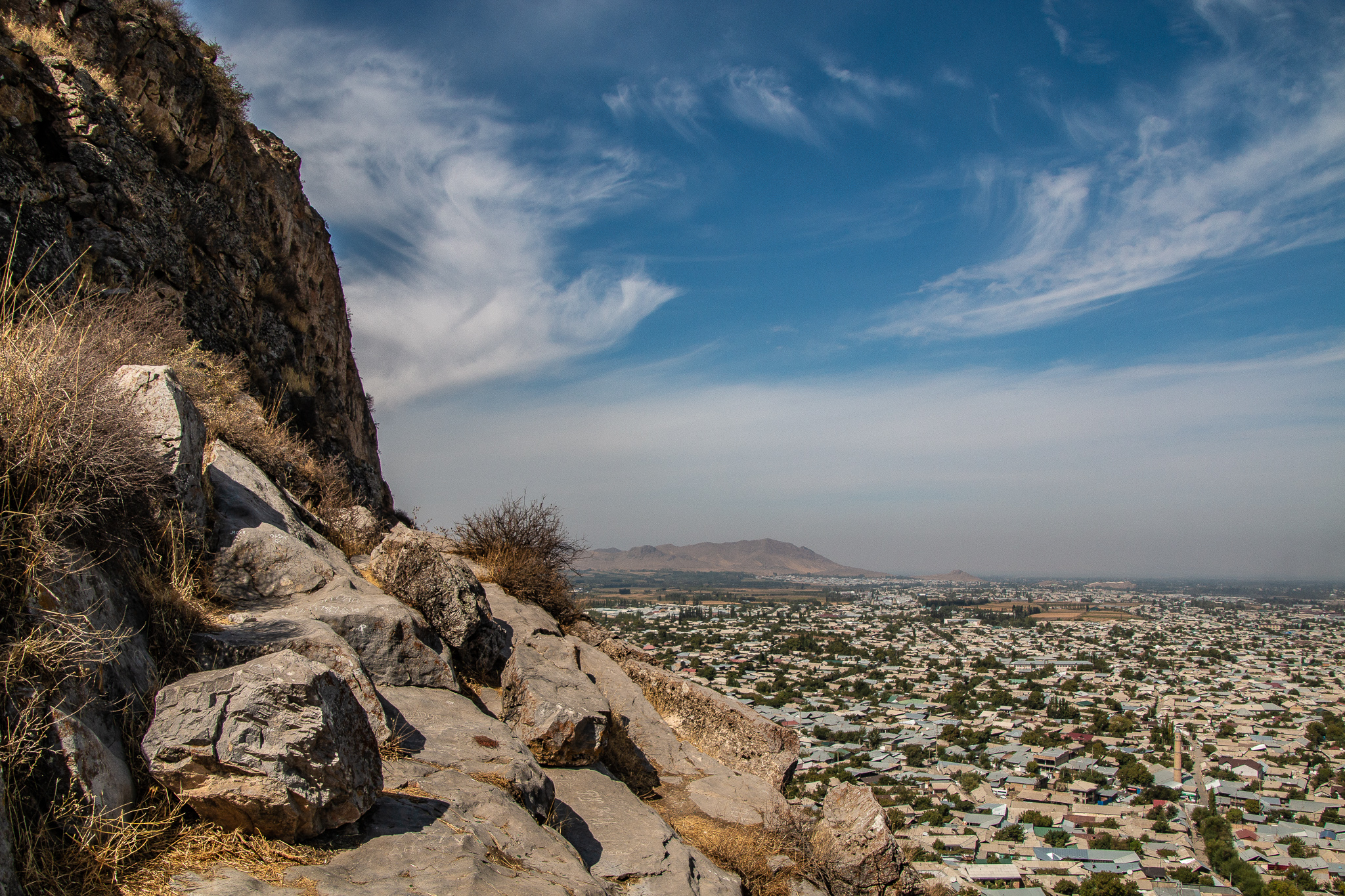 I sweated and dragged myself up the final steps to the summit of the Sulaiman-Too Mountain in Osh, Kyrgyzstan. It’s not exactly a tall mountain, barely reaching 200 metres in height, but in the intense summer heat the air was stifling and every upwards movement was a struggle.

At the top of the final few steps that had been carved from the mountain and layered in concrete, I turned around for a view over the city of Osh below while sweat dripped down my forehead and into my eyes to blur the panoramic.

At the top, I found a small shrine, which for thousands of years travellers and pilgrims have been hauling themselves up the mountain to see, because Sulaiman-Too is not just a sweat-inducing mountain; to many, it’s a sacred mountain too. 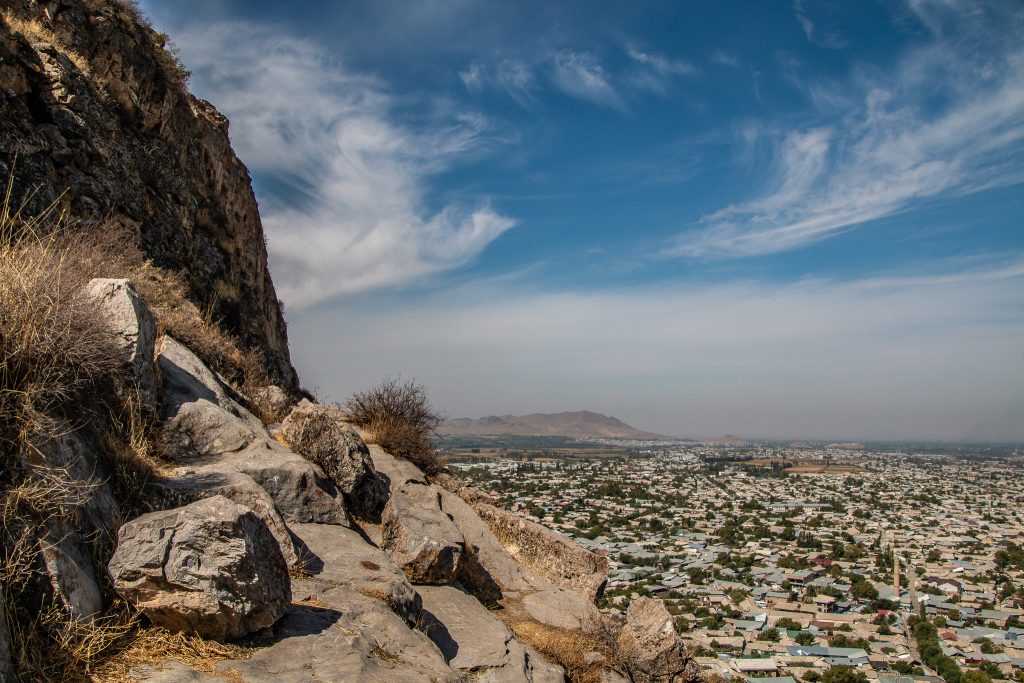 The first thing that travellers will notice when they arrive in the centre of Osh, is the huge, distinct rock that rises so abruptly from the ground that it almost seems as if giants or gods placed it there.

For centuries, for millennia even, Osh has been an important stop along the Silk Road. The mountain can be seen from miles away and has long acted as a landmark for travellers in the region. Although Kyrgyzstan is renowned for its mountains, Osh is part of another landscape. This is the wide Fergana Valley, a remarkably flat region that spreads across Kyrgyzstan and Uzbekistan, and a valley that facilitated the movement of goods and trades from east to west.

The city itself became a wealthy stop along the ancient trading routes, because the Sulaiman-Too rock, in an otherwise featureless land, drew in traders from far away who could easily navigate their way to Osh with its help. Over time, this dramatic outcrop took on more spiritual and sacred connotations too.

Just as tourists like myself sweat their way to the summit today, in early centuries too,  after visiting the city’s enormous bazaar, travellers would climb the mountain to reach the places of worship that were built at the summit. 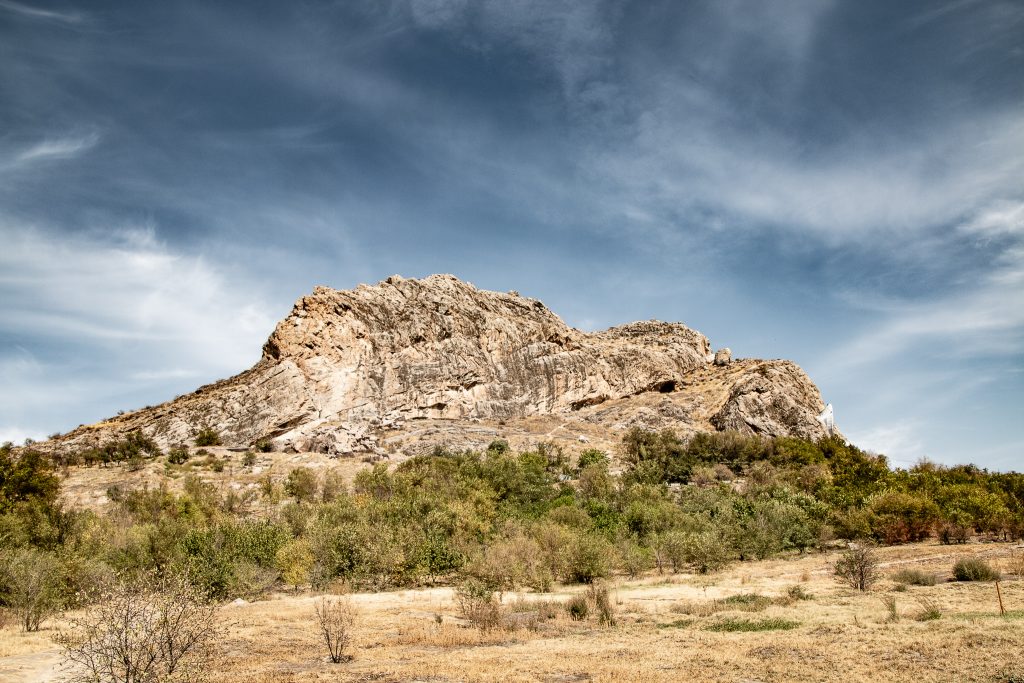 The Sulaiman-Too Mountain’s remarkable influence on Osh and its continued importance as a historical and religious site in the Fergana Valley has led to it being protected as a UNESCO World Heritage Site. Aside from the Tien Shan Mountains, which are a UNESCO Centre shared with China, this is Kyrgyzstan’s only World Heritage Site that’s entirely within its own borders.

For locals, this is an important step in the recognition of the importance of the mountain, because in more recent decades during Soviet rule in Kyrgyzstan, many of the religious monuments and shrines found on Sulaiman-Too were destroyed as the authorities attempted to stamp out religion.

At the top of the steep set of steps I’d climbed in the blistering sunshine, I found one such shrine, which is actually a reconstruction of the original which was destroyed. There has been a shrine here since the 16th century, when the first Mughal Emporer Babur, a descendant of infamous Central Asian conqueror Timur, constructed the first mosque here.

The mountain itself is named for Solomon, a character from the Quran and the other monotheist religions, but before the arrival of Islam in the region, for thousands of years other forms of worship had taken place across Sulaiman-Too. 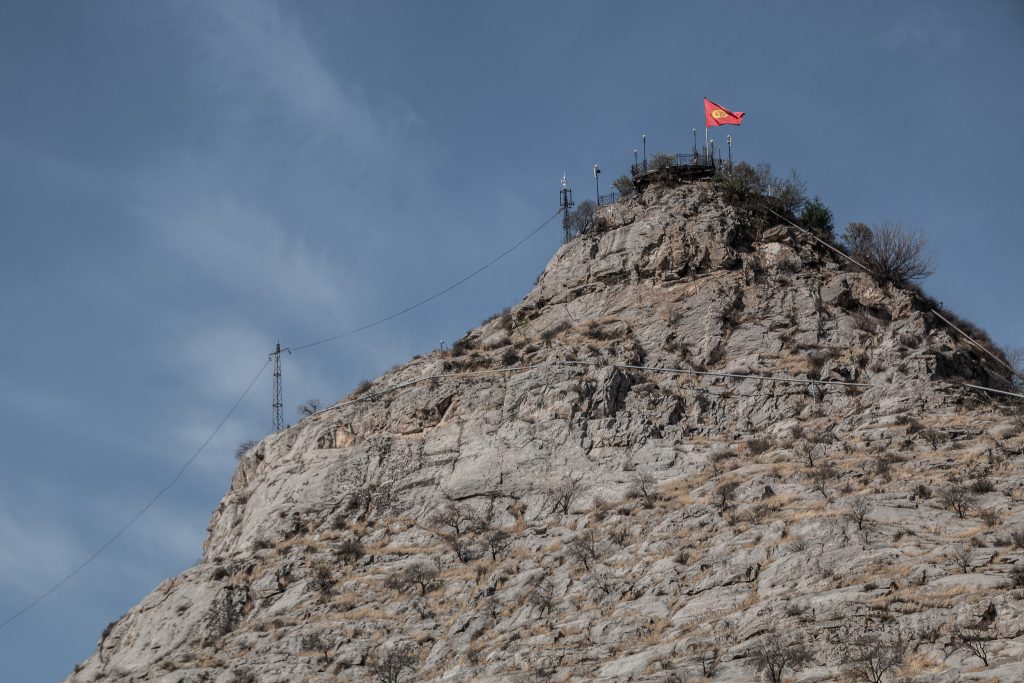 The summit of Sulaiman-Too, where the Islamic shrine is found

For as long as humans have inhabited the land around the mountain, Sulaiman-Too has been involved in local culture, traditions and religion. Across the rocky outcrop can be found the evidence of past practices associated with the mountain, including petroglyphs and even fertility slides.

On the rock face and in the many caves are found ancient drawings and works of art, while even today, the ritual of sliding down certain sections of the mountain is undertaken by women seeking to become pregnant, such is the spiritual strength of Sulaiman-Too for many. And of course, in the modern world, the tallest point in Osh is now home to signal masts and phone towers providing communications across the city.

I was feeling sweaty, but hardly spiritual, as I left the summit to walk along the trail that winds along the mountain from the Islamic shrine to the Cave Museum that displays many of the historic artefacts that have been found on Sulaiman-Too and in the surrounding area. 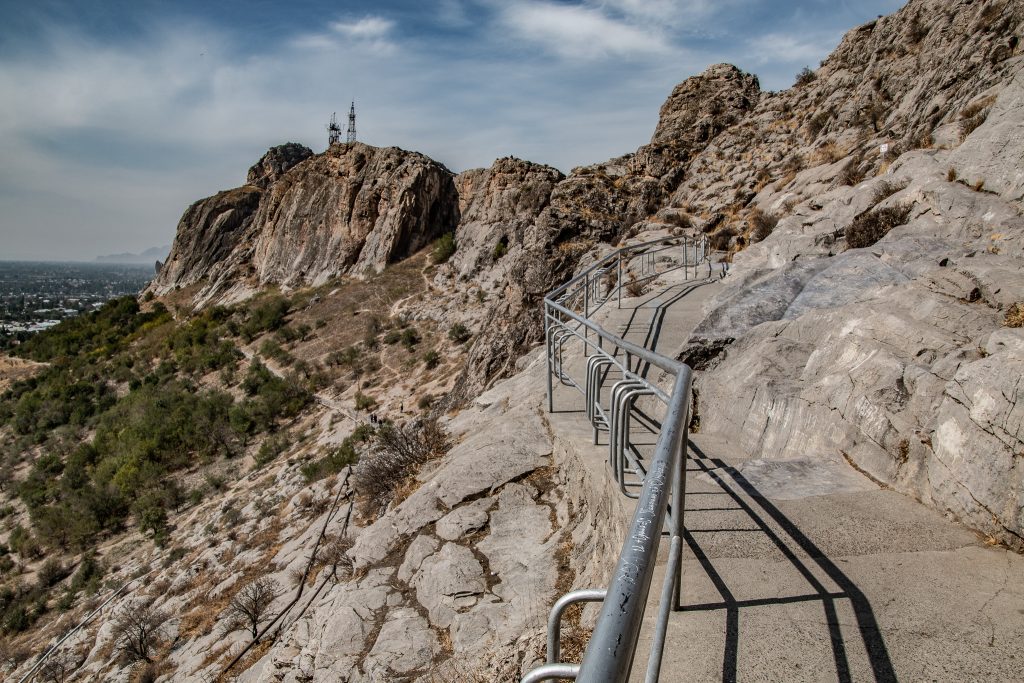 The Soviet’s may have destroyed the religious shrine at the summit, but they built a scientifically minded museum to replace it. Unfortunately, they weren’t much interested in aesthetics and they constructed a brutalist facade to highlight to people the entrance to the said museum.

Inside, I found a wonderful collection of artefacts and objects that traced back the history of Sulaiman-Too from prehistoric times, through to its use in Zoroastrian fire worshipping rituals,  its use as an Islamic holy place and onto the present day.

The museum is found within an enormous cavern in the centre of the mountain, a dimly lit place where exhibits are built into the rock. It’s an intriguing setting to learn more about the significance of Sulaiman-Too. 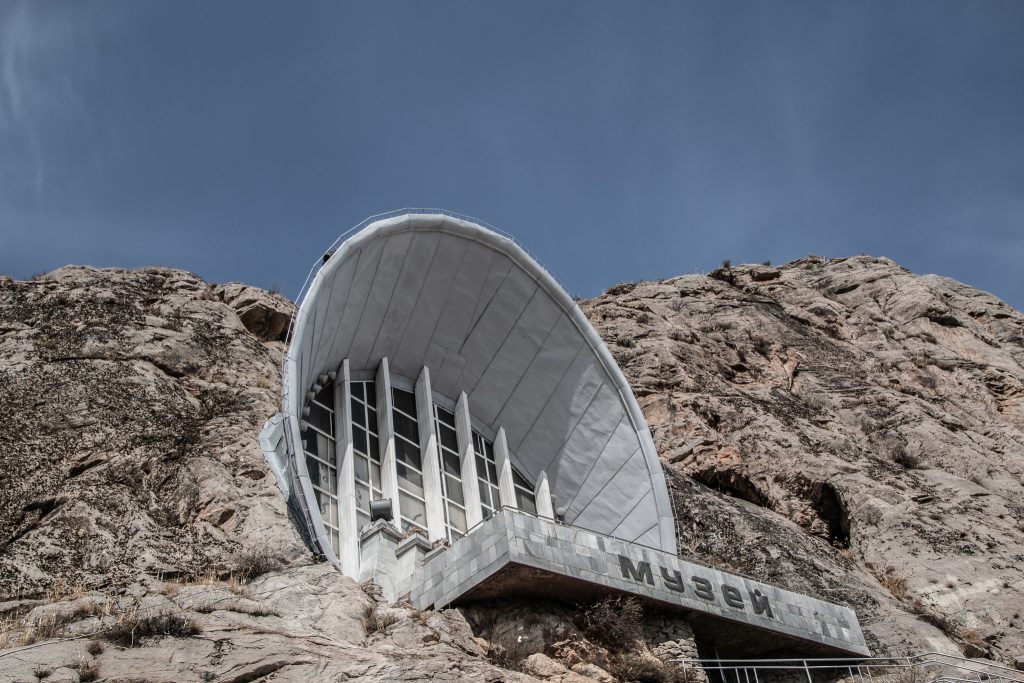 The Way Back Down the Mountain

After exploring the Cave Museum, it was time to move on down the mountain again and back into Osh. I’d taken the eastern entrance by the main, central street in the middle of Osh and I’d suffered up the steep steps in the heat.

Here, by the Cave Museum, there was a gently sloping road that ran back down into Osh by a different route. How I wish that I’d done this journey in reverse.

On the road down I passed a grand mosque built in the mountain’s shadow, while at the entrance to were unique pillars that were somewhat less Islamic in nature, and resembled perhaps, a distant Zoroastrian past that those living under Sulaiman-Too still sometimes clung too.

Soon, I was in the shadow in the mountain too, and I came away from my trek across Sulaiman-Too impressed at the impact a rock could have on culture and religion, but very much seeing why it has played such an integral role in Osh’s history. 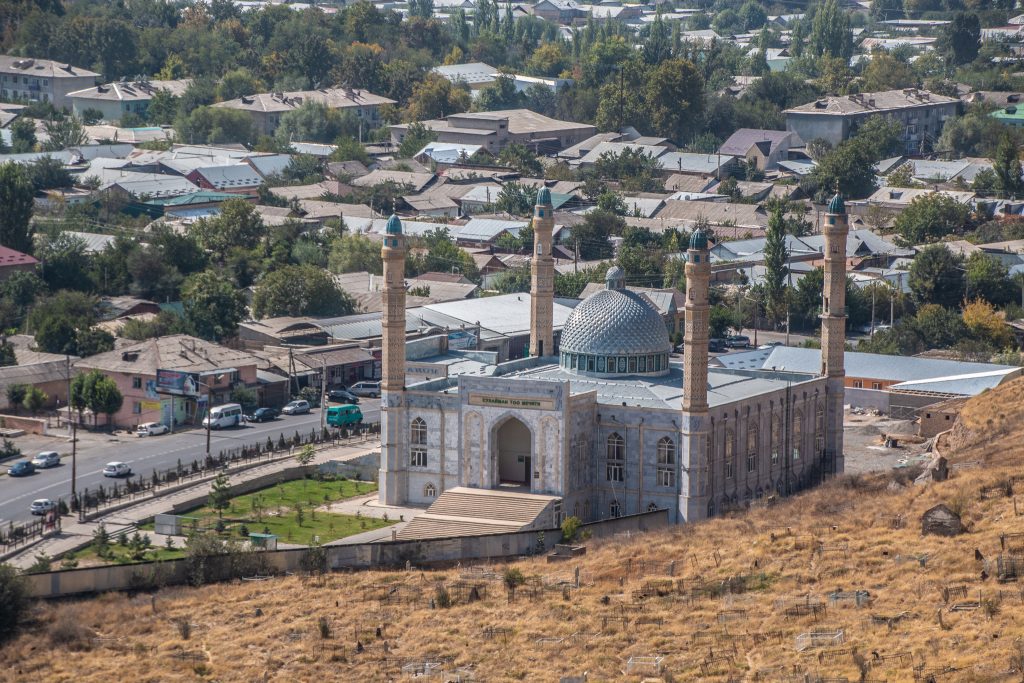 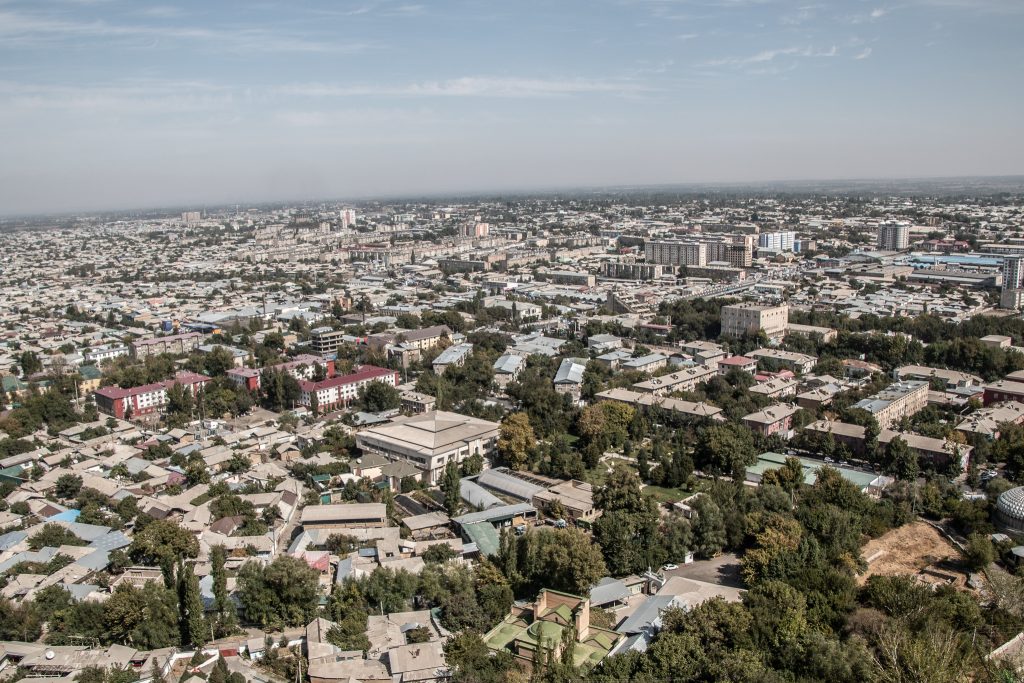 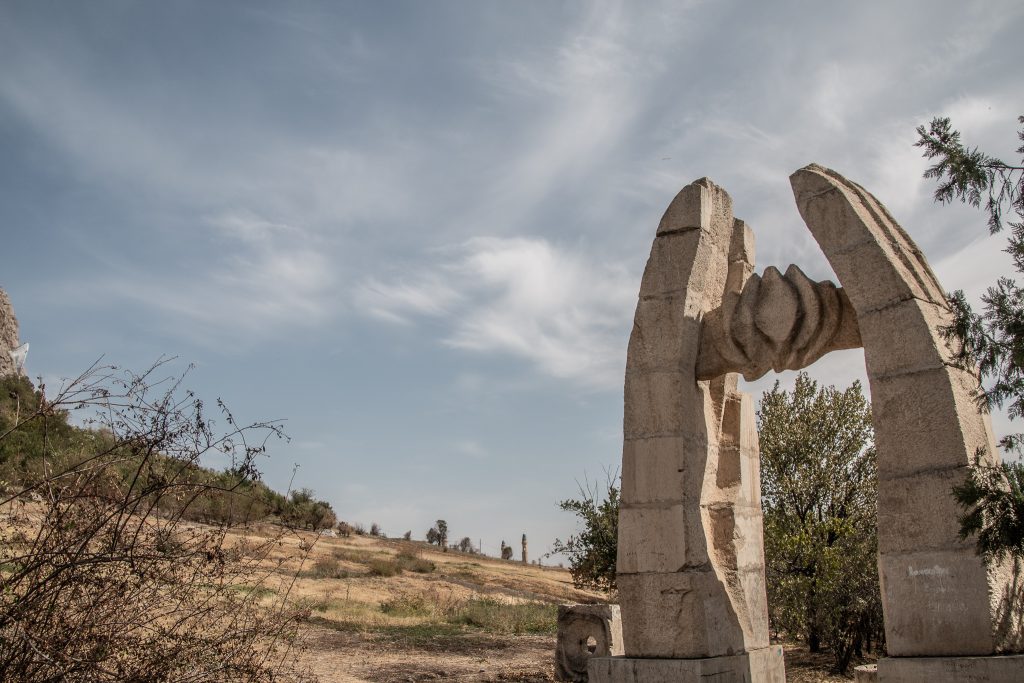 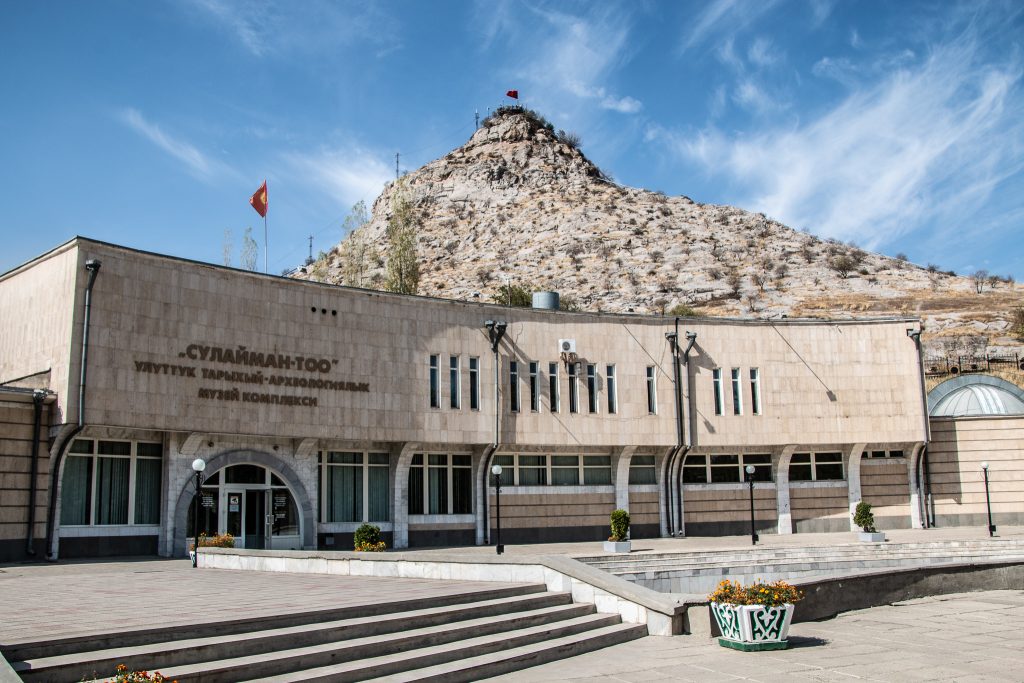 The Soviet-style archaeological museum at the base of Sulaiman-Too

Location of the Sulaiman-Too Mountain in Osh, Kyrgyzstan

Travelling to Osh? Sign up for Air BnB to book your accommodation using this link HERE and you’ll get £25 free credit towards your first booking!