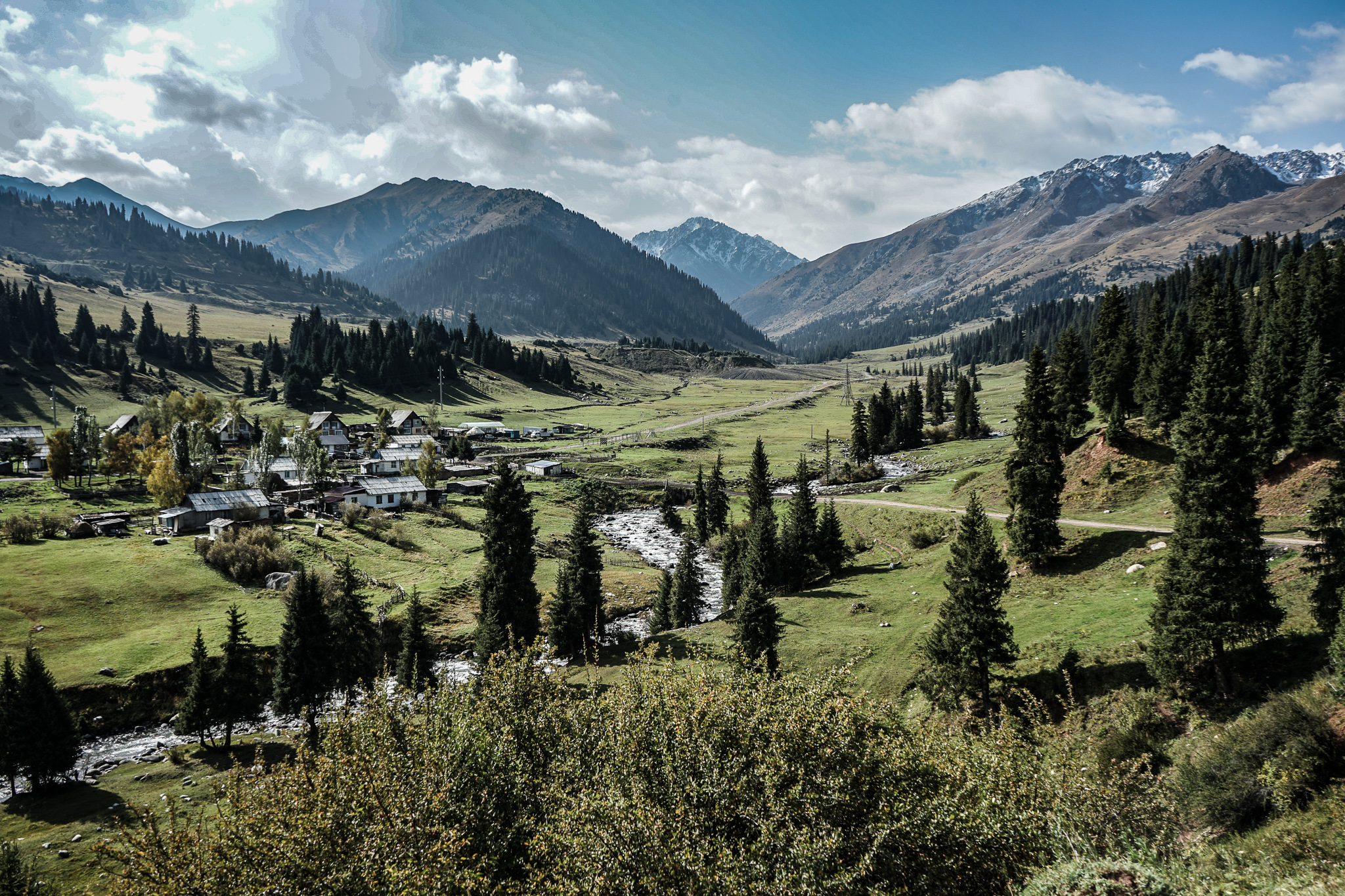 Hidden away on the far, eastern shores of Issyk Kul Lake, is one of Kyrgyzstan’s most picturesque and dramatic valleys.

It’s a place of high altitude treks, where snowy mountaintops are framed by alpine scenery and where every other travel writing cliche you could ever imagine actually has some meaning for once. This is the Jyrgalan Valley, and it’s fast becoming the next big place to visit in Kyrgyzstan.

Just a few years ago, however, Jyrgalan was a struggling coal-mining town which offered few prospects to the few families that remained after the collapse of the Soviet Union. Today, in what is one of the country’s most inspiring stories of transformation, Jyrgalan has turned itself into an emerging tourism hub, and the future looks bright for this small, remote town, in the Tien-Shan mountains. 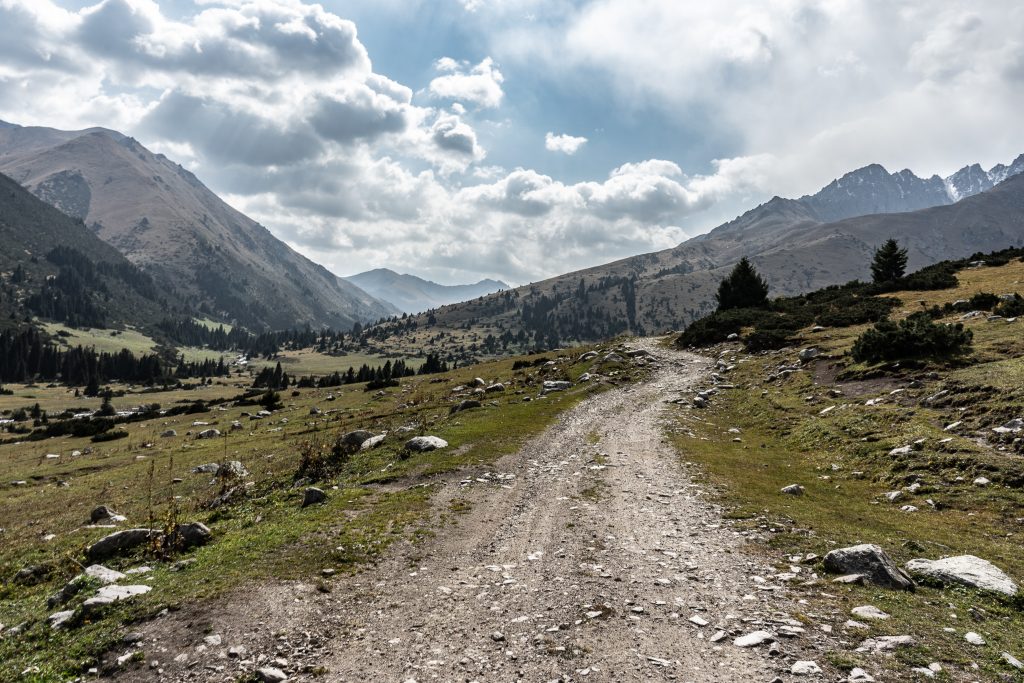 I was in Kyrgyzstan to watch the World Nomad Games, held in Cholpon-Ata on the northern shore of the vast Issyk Kul Lake, but after the last events of this epic display of nomadic culture and sport had played themselves out, it was time for me to explore Kyrgyzstan’s culture and scenery in a more natural setting.

Discover Kyrgyzstan, alongside USAID, have been working hard to help locals to take advantage of the growing tourism industry in Kyrgyzstan and they invited me to explore the Jyrgalan Valley, to see for myself a place that they consider to be a resounding success story.

Kyrgyzstan, one of the poorest nations in Post-Soviet Central Asia has struggled economically since independence in 1991, but one of the biggest emerging markets in recent years has been tourism.

Travellers across the world are slowly waking up to how spectacular the scenery is in Kyrgyzstan, and how unique the culture is, and year on year the number of tourists visiting – particularly from Western countries – has been increasing steadily, giving local families and business more economic opportunities.

After the World Nomad Games had closed, I was soon speeding along the shores of Issyk Kul Lake in a minibus, and heading towards the high mountains in the east, to find out how one old Soviet coal mining town was being transformed into a successful tourism venture by the locals. 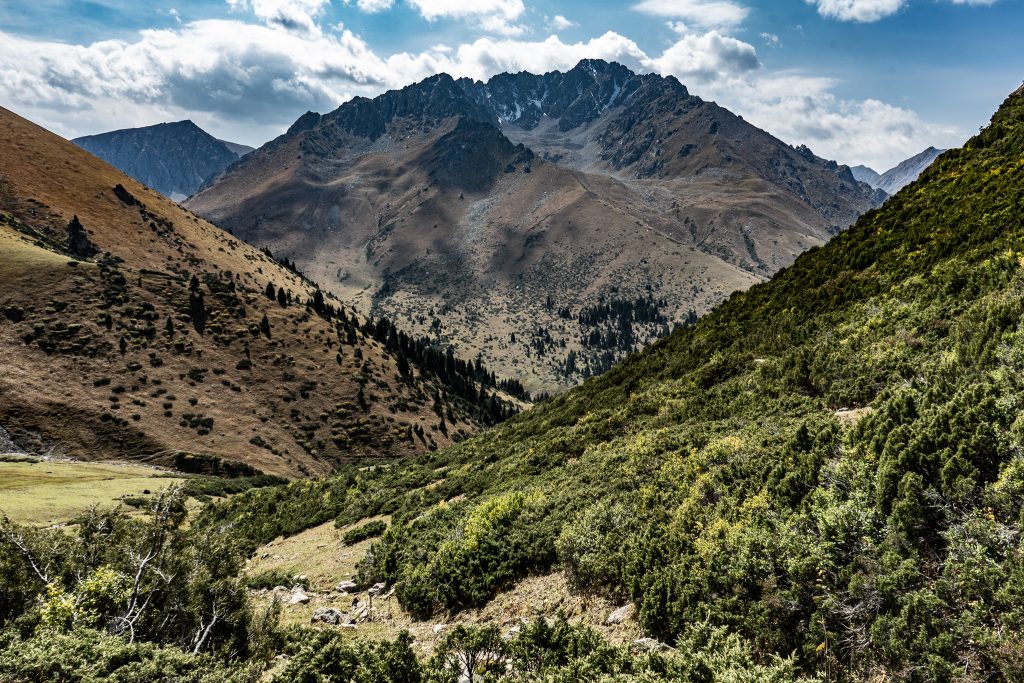 As we drove east along the lake, I could see the mountains of the Tien-Shan rising high in the distance. On the other side of the range was Kazakhstan and beyond that, China. Jyrgalan is one of the most distant towns in the northeast of Kyrgyzstan, and as we were surrounded by increasingly tall mountains as we drove away from the lake, I began to realise just how remote and isolated this valley is.

That sense of isolation though is what attracts many tourists to Jyrgalan. As we neared the town, the valley opened up to reveal wide, green pastures flanked by snowy peaks. We were already high up, around 2500 metres or so, and even in September, snow had begun to fall.

Jyrgalan is a small town; surrounded by little but mountains, passes, rolling hills and forests. It’s almost idyllic, a countryside haven that’s hidden away from the rest of the world, but that is now being sought out by travellers who are looking to take on remote hiking trails and to experience the rural life here.

The calm sense of pastoral peace that you will find here now though, hides the troubles and hardships that the families of Jyrgalan have gone through over the past decades. Only now, with a burgeoning tourism scene, has Jyrgalan begun to find its place again. 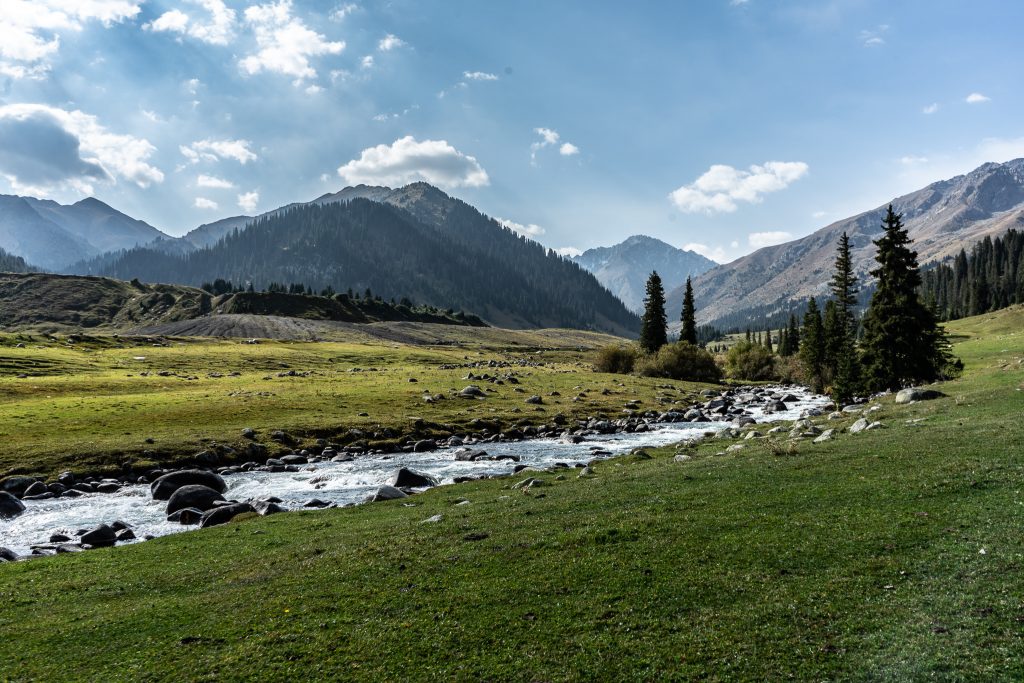 If you try to take a local marshrutka from Karakol to Jyrgalan, the sign on the minibus that you are after could simply say ‘Coal Mine’.

The coal mine in question you can see as you follow the river into Jyrgalan. Opened in 1932, the mine gave new economic impetus to a region that was previously nomadic, and families began to settle in Jyrgalan to take advantage of the jobs and money on offer, particularly as the Soviet policies began suppressing that nomadic lifestyle.

Jyrgalan grew during the Soviet days, but when the Union collapsed and Kyrgyzstan gained its independence, the industry collapsed too as borders closed and markets changed.

Today the coal mine is still in operation but on a much smaller scale. After independence, many families began to leave Jyrgalan as the jobs disappeared. The younger generations left in search of work in Karakol or in Bishkek, work they would previously have found in the mine. Slowly, Jyrgalan emptied, and today there is just a fraction of the number of people living here in comparison to the height of the mining days.

Those few families that did want to stay, however, knew that they needed something to change. Rather than mining coal again, they decided to exploit their valley’s other great natural resource. They wanted to attract tourists here to enjoy the spectacular landscapes and beautiful scenery, and in turn, create new economic opportunities for themselves and for the future generations of Jyrgalan. 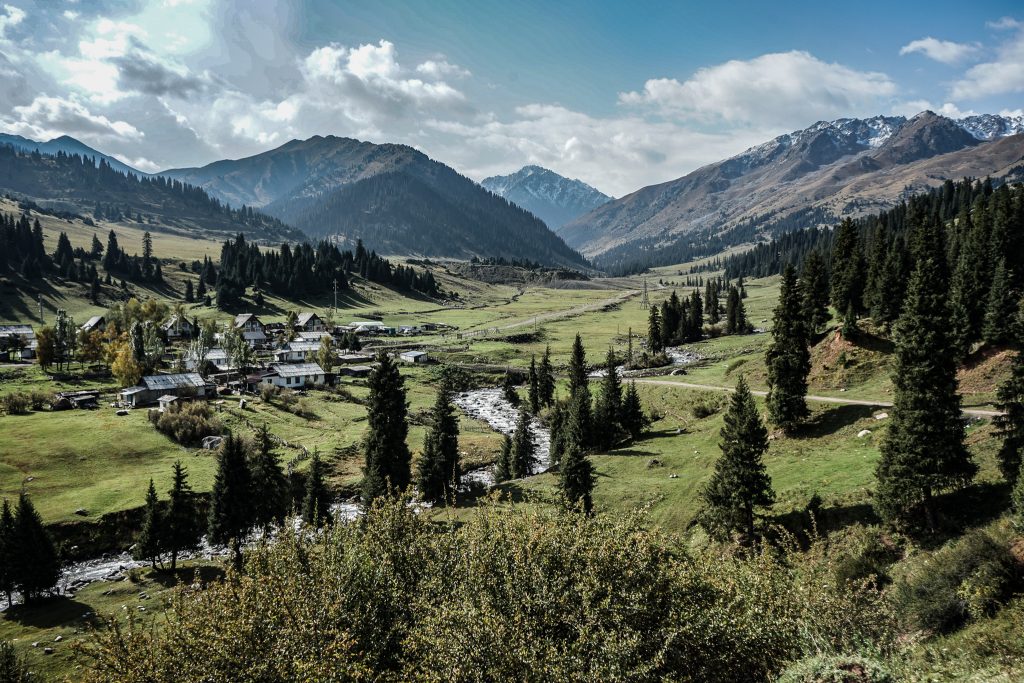 Tourism in the Jyrgalan Valley

The guesthouse I was staying at, like several others in town, had been established with the help of USAID funding.

The families in Jyrgalan had pitched their business models together to the organisation as recently as 2016 and received the much-needed backing they were after to make tourism in the valley a tangible enterprise.

Since then, they’ve seen tourism grow rapidly over the last two years, as the infrastructure improves and their own experience working with foreign visitors increases drastically.

The guesthouse I was staying in even had a brand new sauna, which I can say from experience, is the perfect place to relax after a day’s hiking in the mountains. 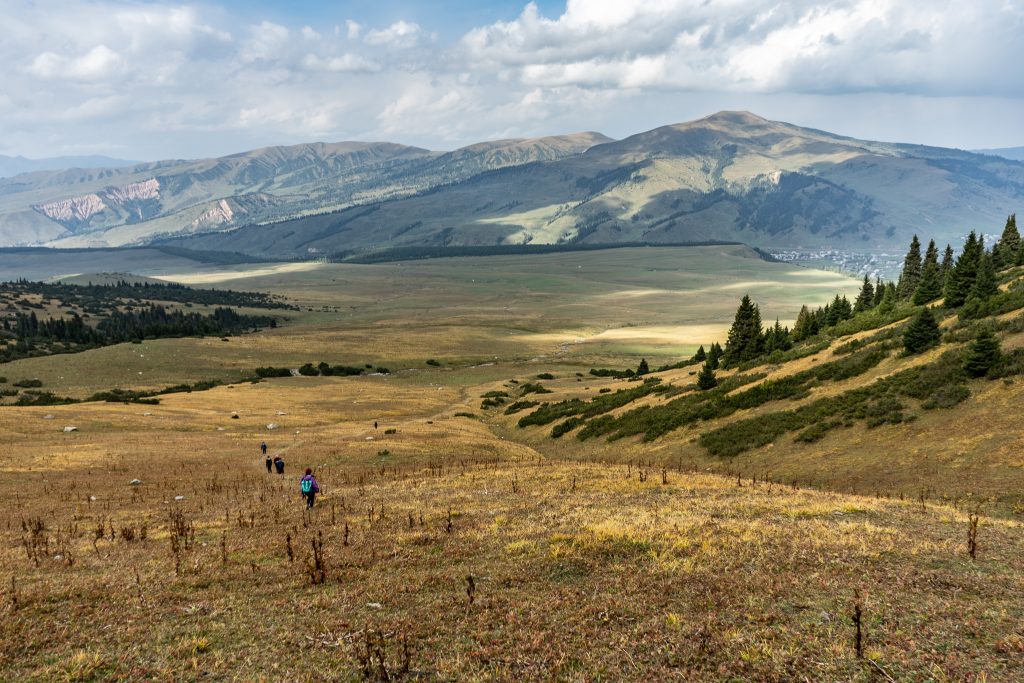 It’s those mountains too, that are the real draw for tourists making the journey here. The valley and the surrounding peaks are made for hiking. There are easy day walks from the town, incredibly steep, uphill slogs too, multi-day treks and plenty of high altitude lakes waiting to be discovered.

This is the Kyrgyzstan that will inevitably be in the tourism brochures one day, but for now, despite the ever-increasing number of visitors to Jyrgalan, there is still a mass of uncharted territory to be explored.

The families here are already beginning to benefit exponentially from that tourism increase too. The locals are running the guesthouses and homestays, they are guiding visitors through the spectacular but difficult scenery, teaching them how to ride horses or hiring out camping gear for multiday treks.

And after hiking through the valley and exploring the vivid scenery of Jyrgalan, I believe it’s safe to say that this beautiful valley will fast become a favourite destination on the travel trail in Kyrgyzstan, and that other beautiful, but as of yet unknown villages and towns across the country will soon follow the example of Jyrgalan, and make sure that their destination is firmly on the map too. 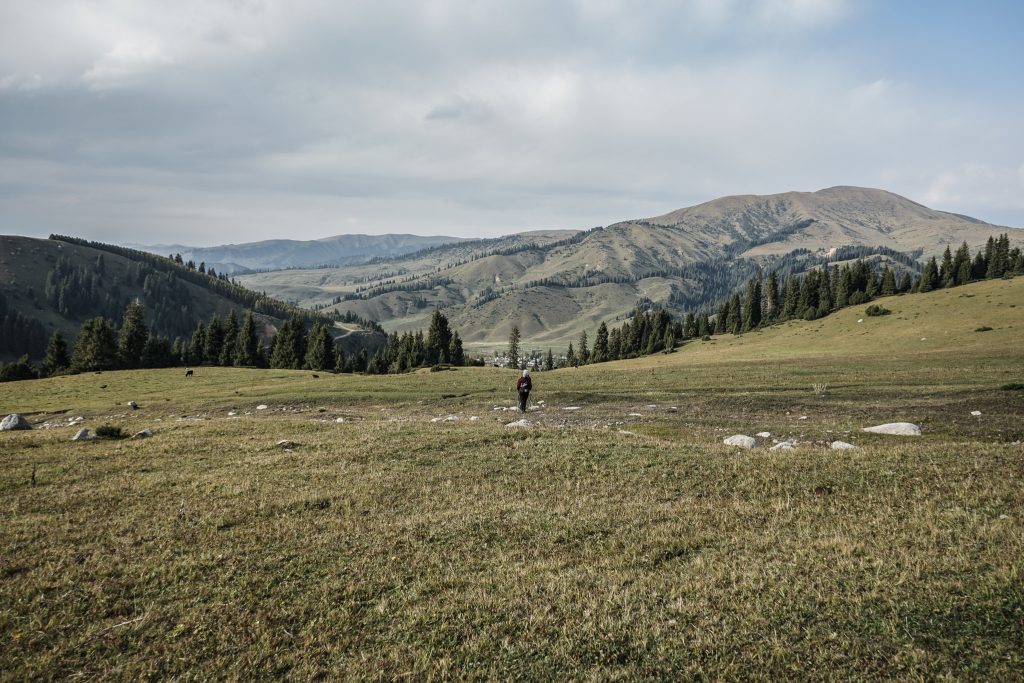 To find out more about travelling to the Jyrgalan Valley, visit their destination website for information on everything from transport and accommodation to hiking trails and horse treks.