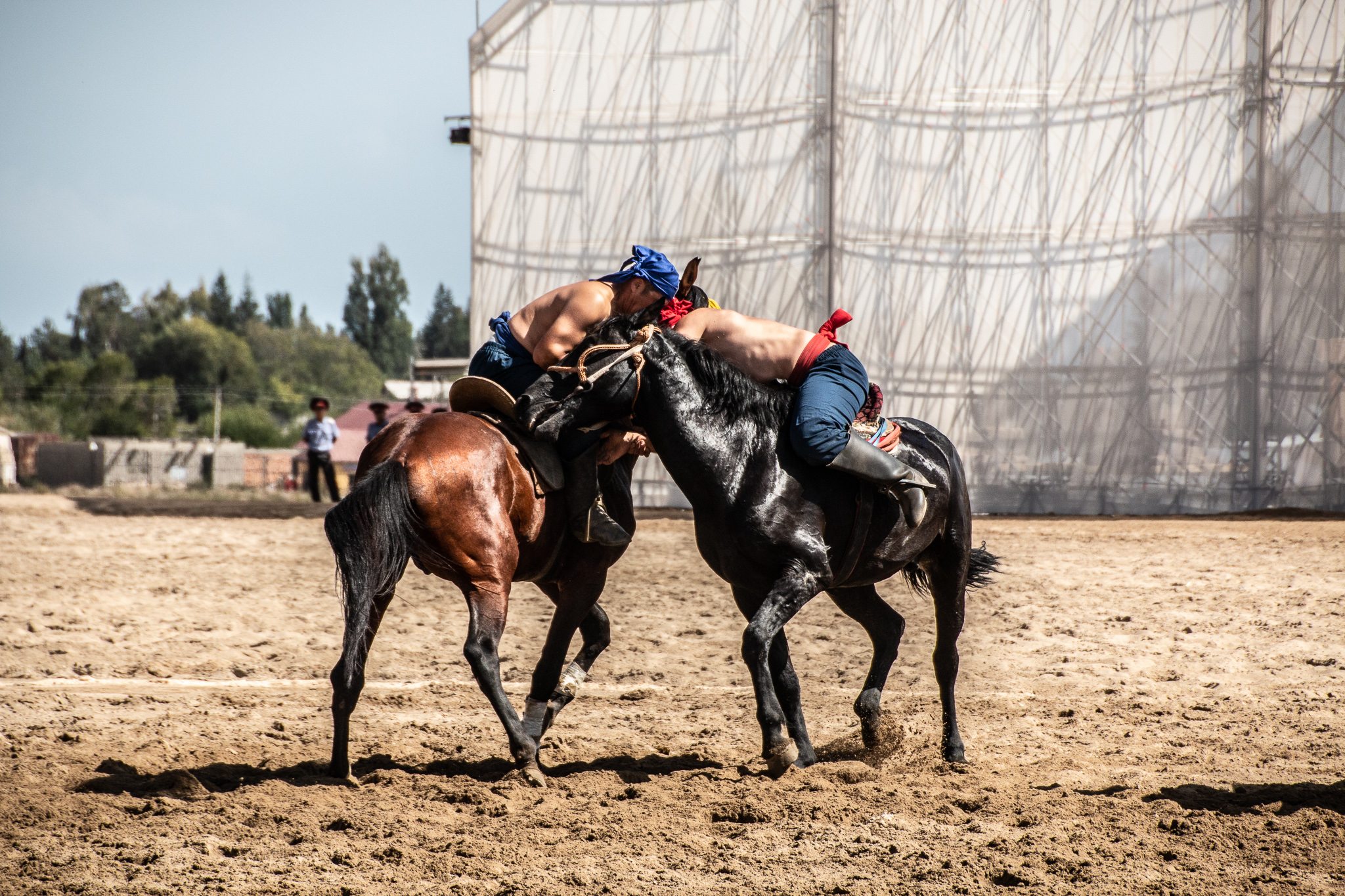 After a week of epic nomadic events and wild Central Asian sports, the third edition of the World Nomad Games came to a close, with a closing ceremony that was every bit as extravagant as the opening ceremonies, and that even included a live performance from German Eurovision contestants from the 1970’s, Dschingiss Khan. A very apt song to play in front of a crowd descended from Genghis Khan himself.

To give you an insight into the madness of this event and the at times confusing events and contests being held, having had time to reflect on the sports and the competitions on display, I thought that I would give you all a quick rundown of the strangest sports that I discovered at this year’s World Nomad Games in Kyrgyzstan.

From Dead Goat Polo to Horseback Wrestling, here are the most unusual sports of the World Nomad Games.

Kok Boru is the art of throwing a headless goat carcass into a bin, while the opposing team try all they can to wrestle it off you. It’s a tradition that is said to date back to the days of Genghis Khan, but whatever its true origins may be, this a sport that is very much a big deal in modern Kyrgyzstan.

I saw my first match of Kok Boru at the World Nomad Games, as Kyrgyzstan beat Moscow, before going on to beat Uzbekistan in the final of the event, securing yet another victory.

It’s a strange sport by Western standards, but one which was thrilling to watch. The entire goat carcass is used in a victory feast afterwards, so don’t worry about this being an unnecessary slaughter of goats either.

With teams from France and the USA also competing, I’m hoping that it won’t be too long before this mad sport makes it way across the world. I’ll have to learn how to ride a horse though before I can even think about playing. 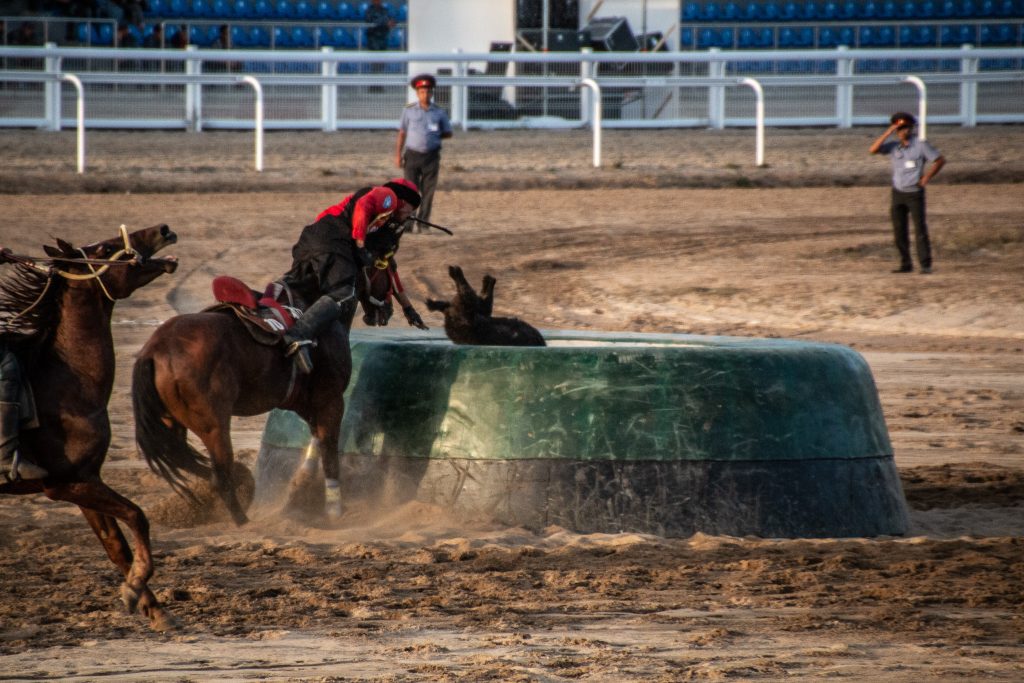 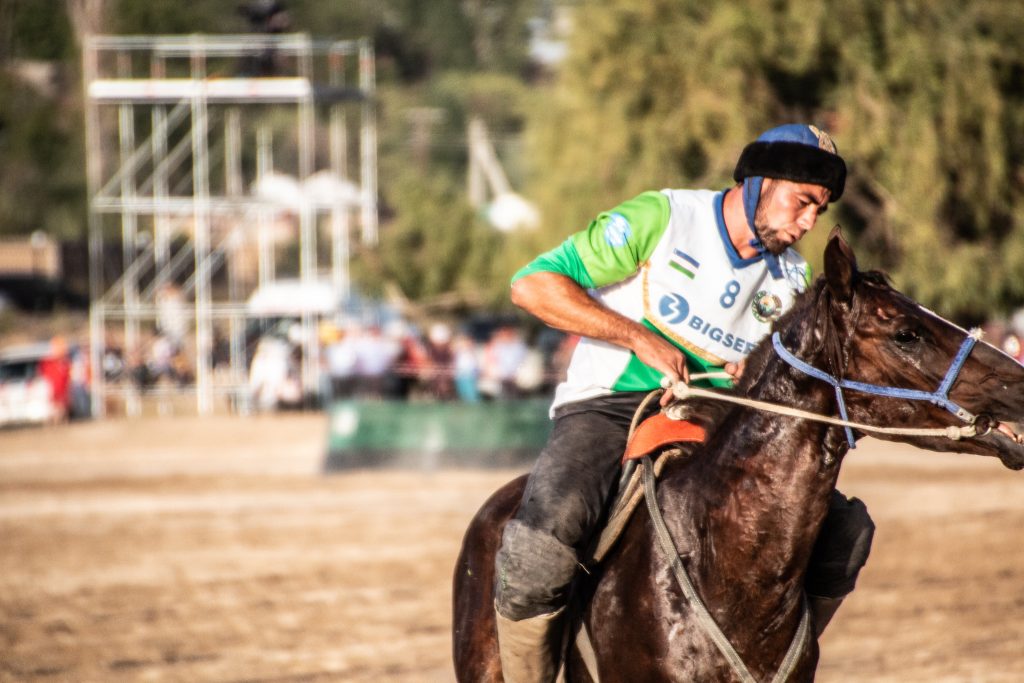 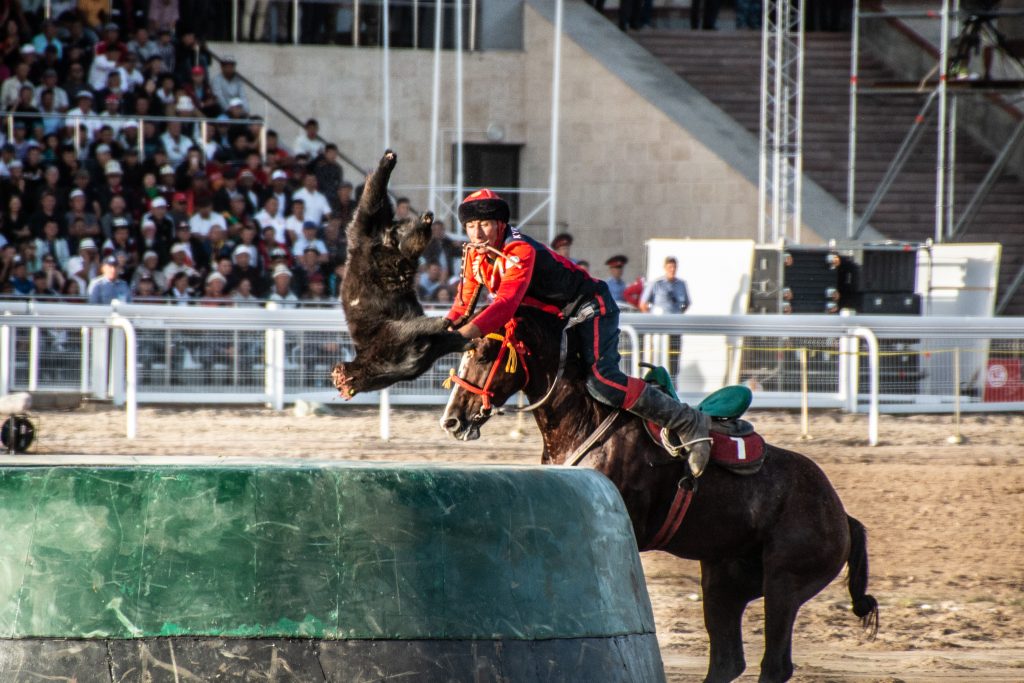 Salburuun is the art of hunting with eagles, and other big birds of prey such as falcons and hawks too. It’s a nomadic tradition, that in the mountains of Kyrgyzstan still very much has a practical use, as the eagles are trained to catch prey such as hares and foxes and then return to their masters with the kill.

It’s a demonstration of the close bond between man and bird, and at the World Nomad Games, this sport is practised competitively, as the trainers spin around a hunk of dead pigeon to entice their birds to fly off and then return.

Some birds flew off and didn’t return, but most were exceptionally well trained and flew off into the valley before quickly arriving back on the field. 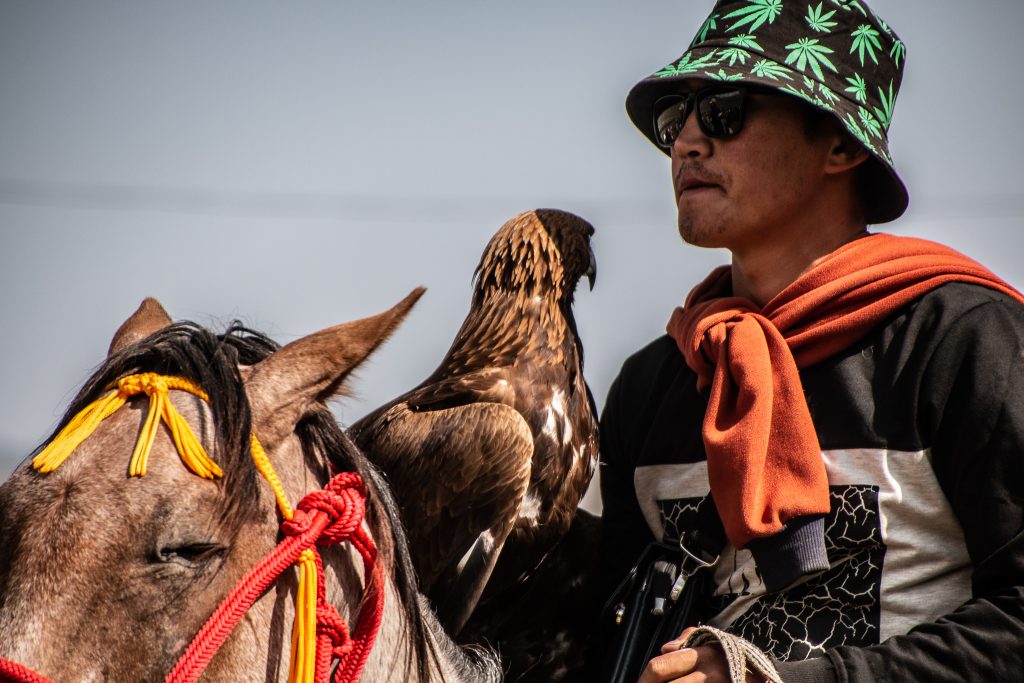 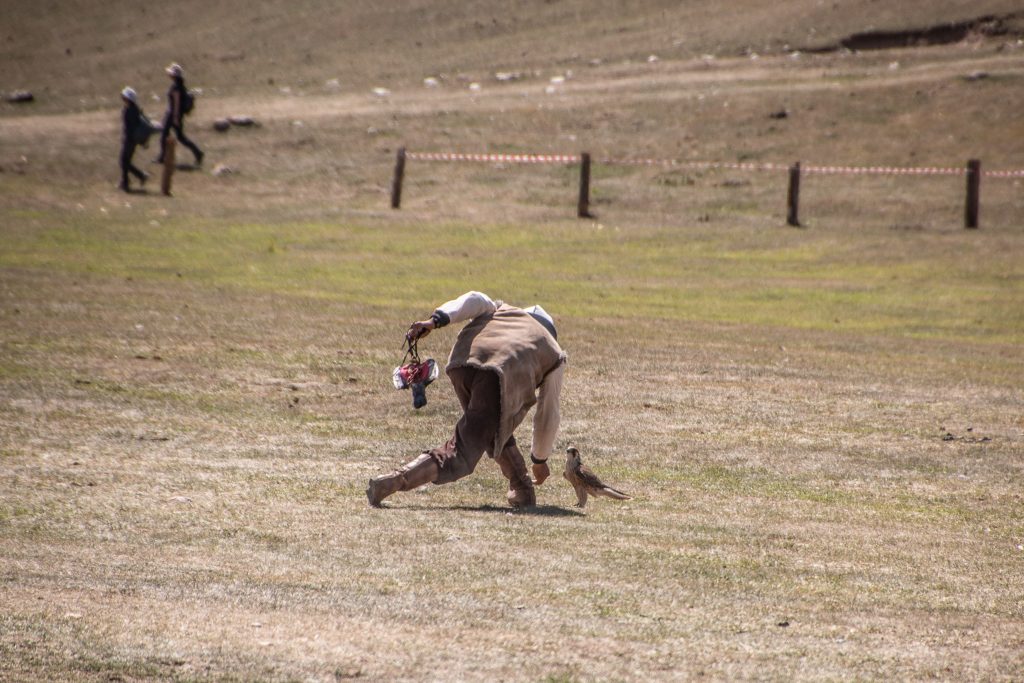 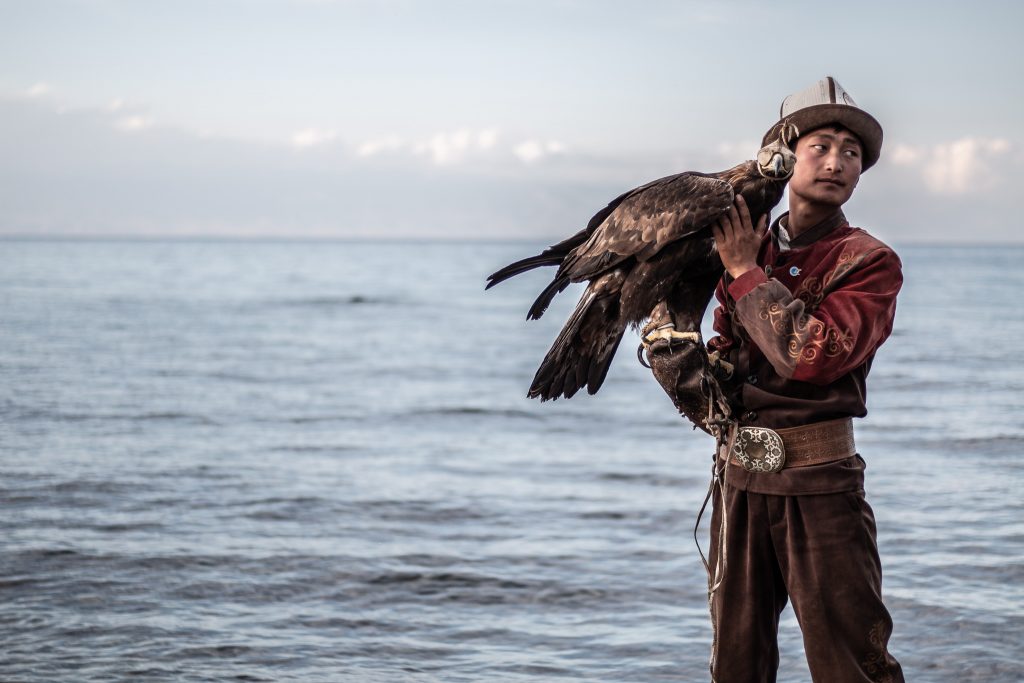 One of the real highlights of the World Nomad Games, was the enthralling sight of horses galloping at full speed along the valley while archers drew their bows and thumped home arrow after arrow into targets in a fast-paced and emotional event.

This is a competition that takes real skill. Each competitor must be a master of the bow and arrow, and their horse and many of the archers had only just met their horses that same day, making conditions even trickier than many of them made it look.

It was an incredible event to watch and one that in my opinion, has enough of a thrill factor to surely warrant it being in the real Olympics one day! 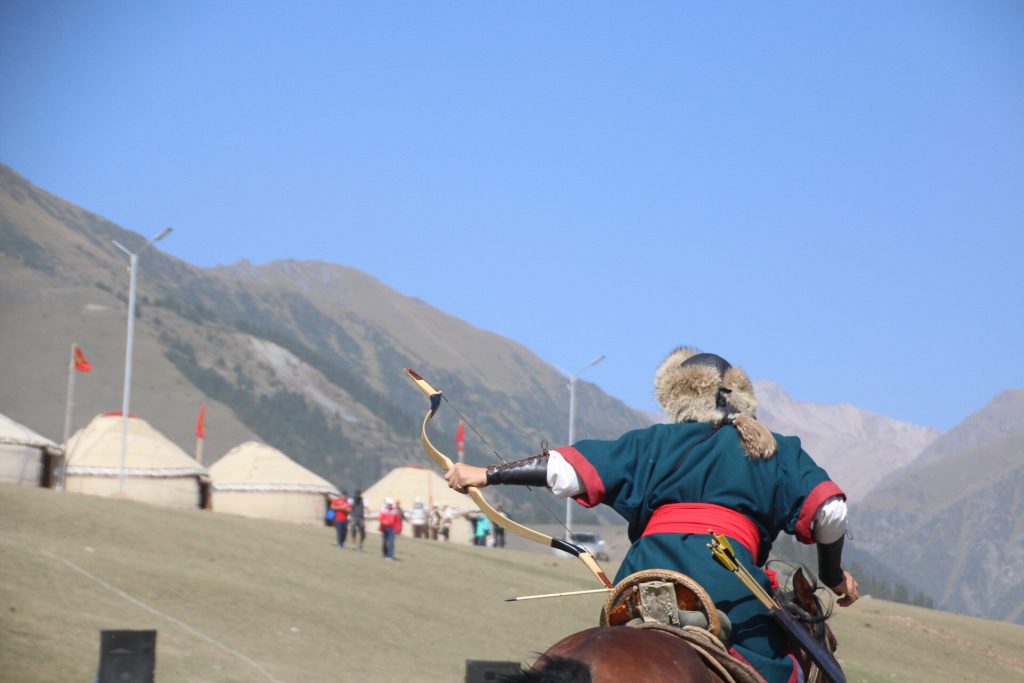 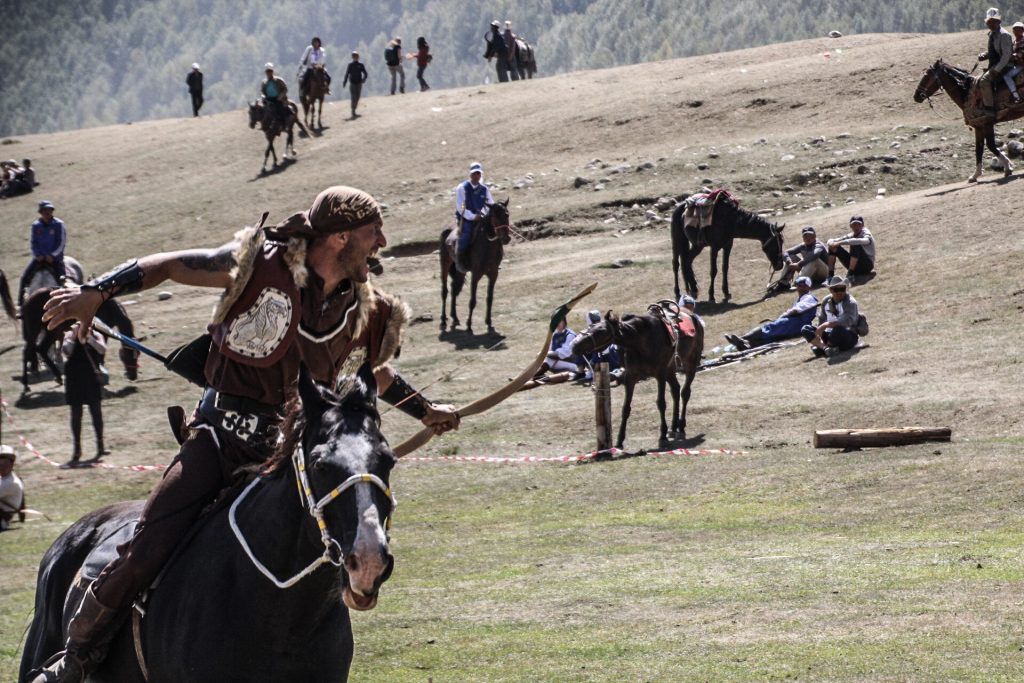 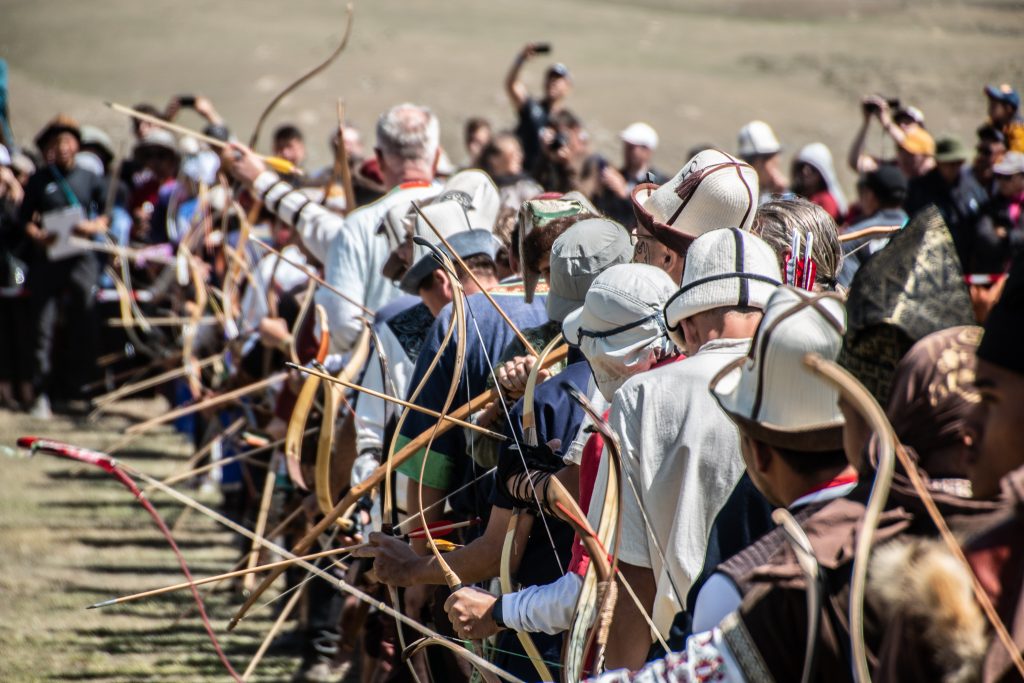 Wrestling is a huge part of the Central Asian sporting scene and many athletes from across these former Soviet nations always do well in the Olympics and in other international sporting events. At the World Nomad Games in Kyrgyzstan, there was plenty of wrestling on show, with different disciplines held each and every day throughout the week.

The final event of the wrestling, was the Great Nomad Wrestling, an epic battle between competitors of any discipline and weight category, with only one winner left standing on the last day of competition. 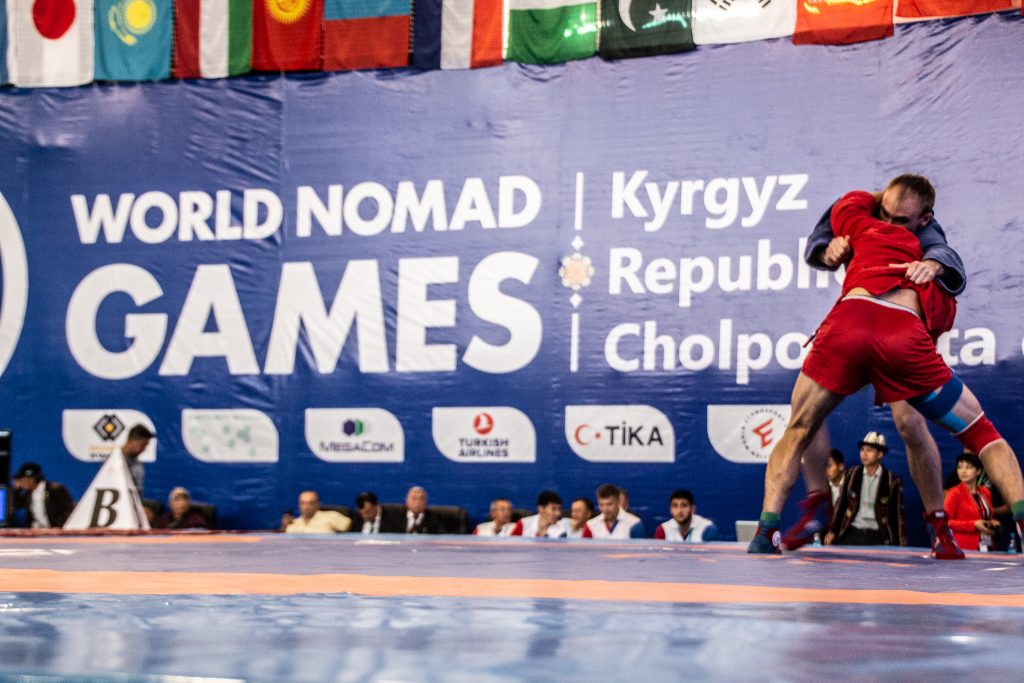 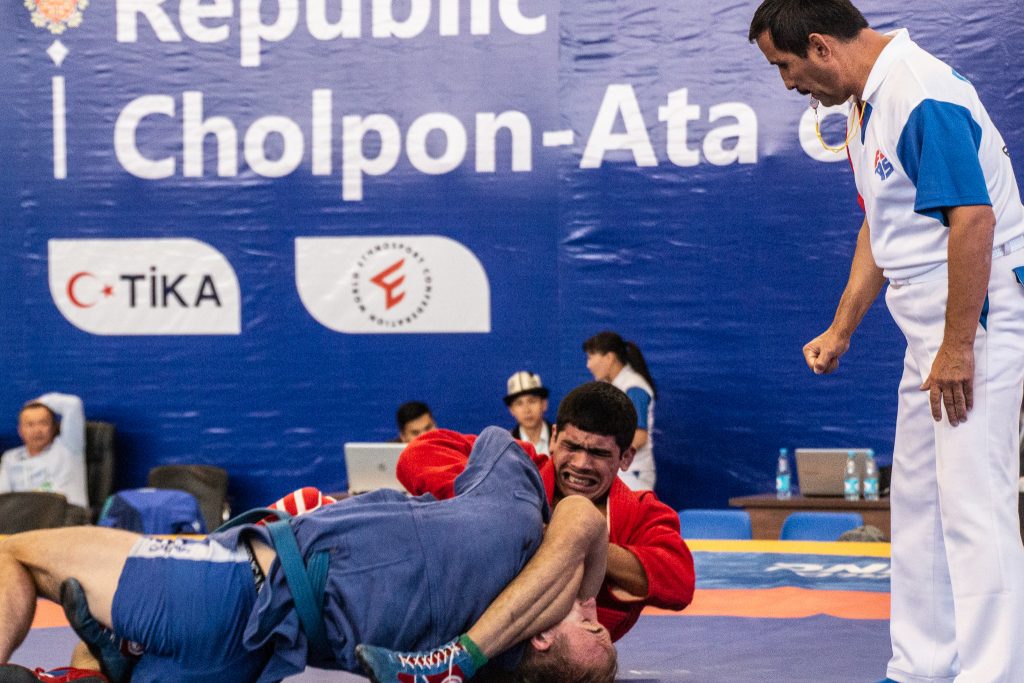 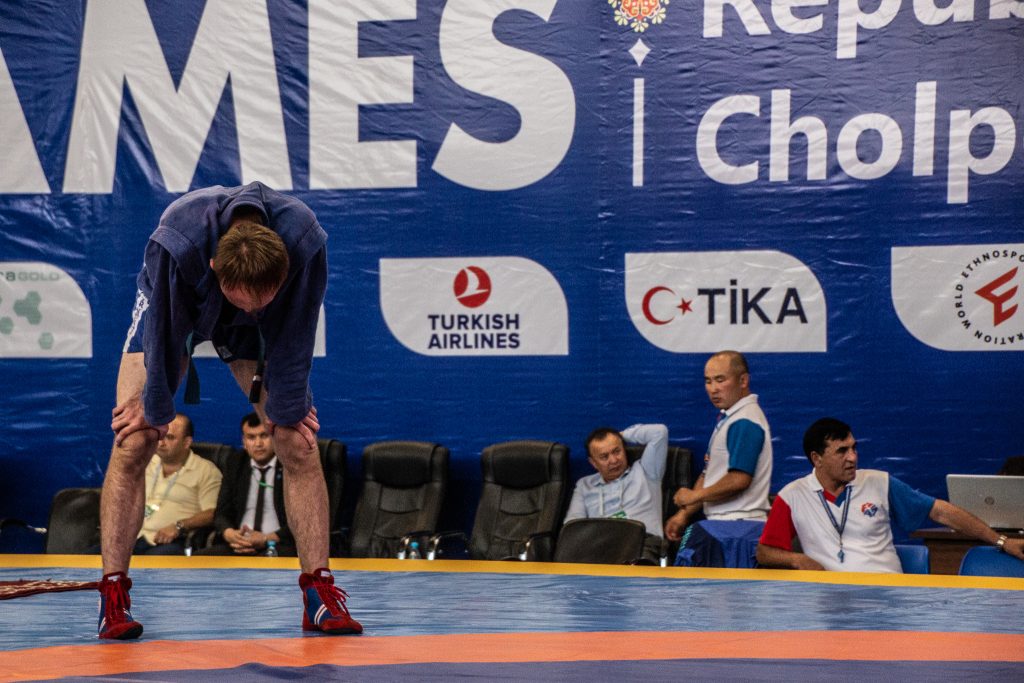 The crowd favourite though was not the more international wrestling events, but the Er Enish, where two competitors mount their horses and then battle it out until one of the opponents is left horseless, on the ground.

The stands of the Hippodrome stadium in Cholpon-Ata were packed for the qualifying rounds and even more so for the final, which was held before the last games of the Kok Boru. There was even a former MMA fighter from the US in action, although it was the Kyrgyz and Kazakh horseback wrestlers that took most of the glory. 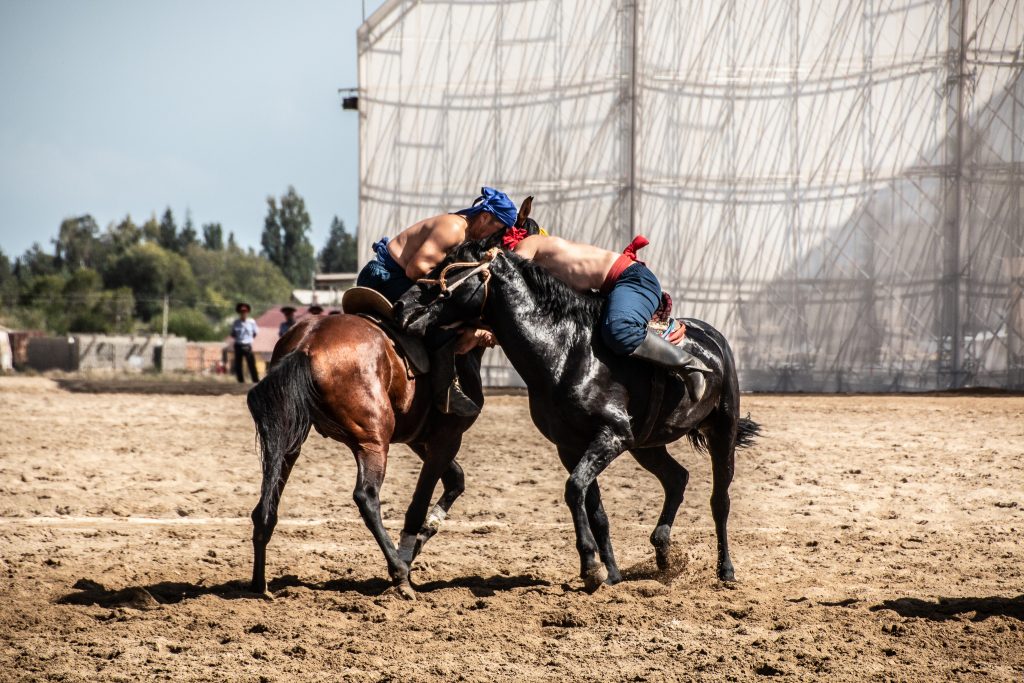 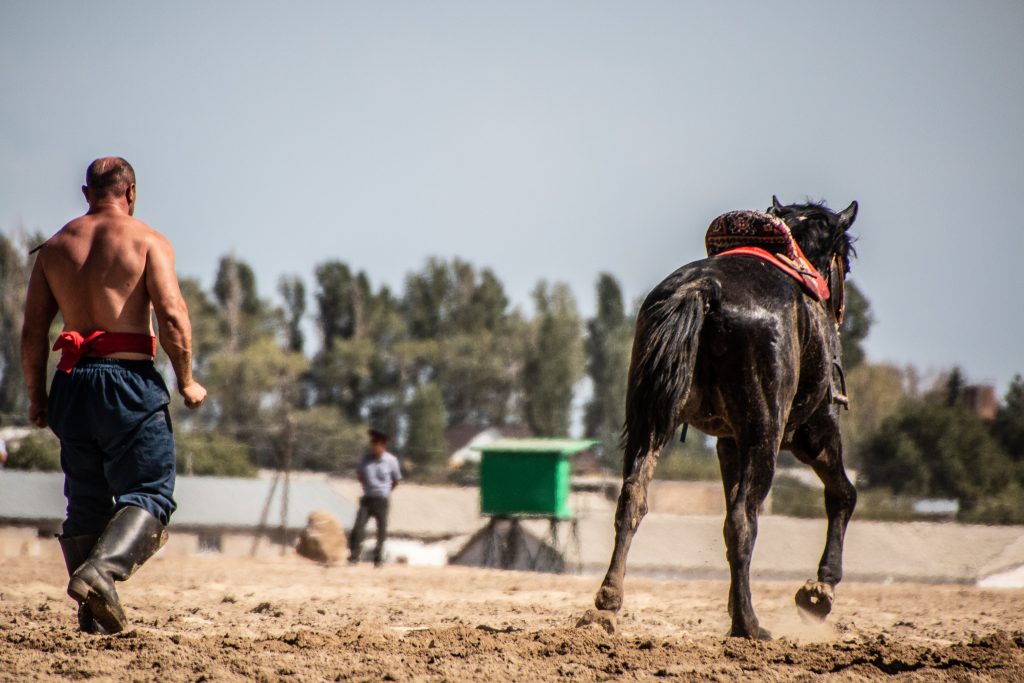 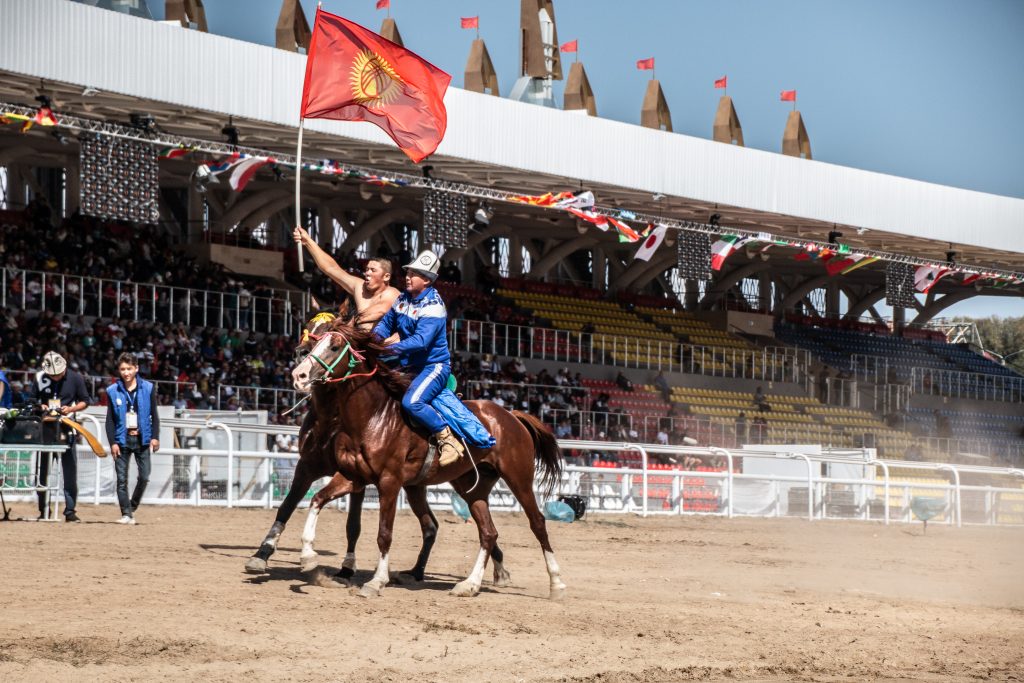 The Next World Nomad Games

The fourth edition of the World Nomad Games will be taking place in 2020, and with the rising international attention being paid to this unusual sporting competition, the games will, in fact, be hosted by Turkey, not Kyrgyzstan.

At the closing ceremony, the hand over commenced, and it will be interesting to see how Turkey host the next edition. They have a similar nomadic history, as the Turkish people are closely related to Central Asian peoples, in language and culture, however, there will likely be many more editions to the events on display, as Turkish sports will most likely be the highlight of the next show.