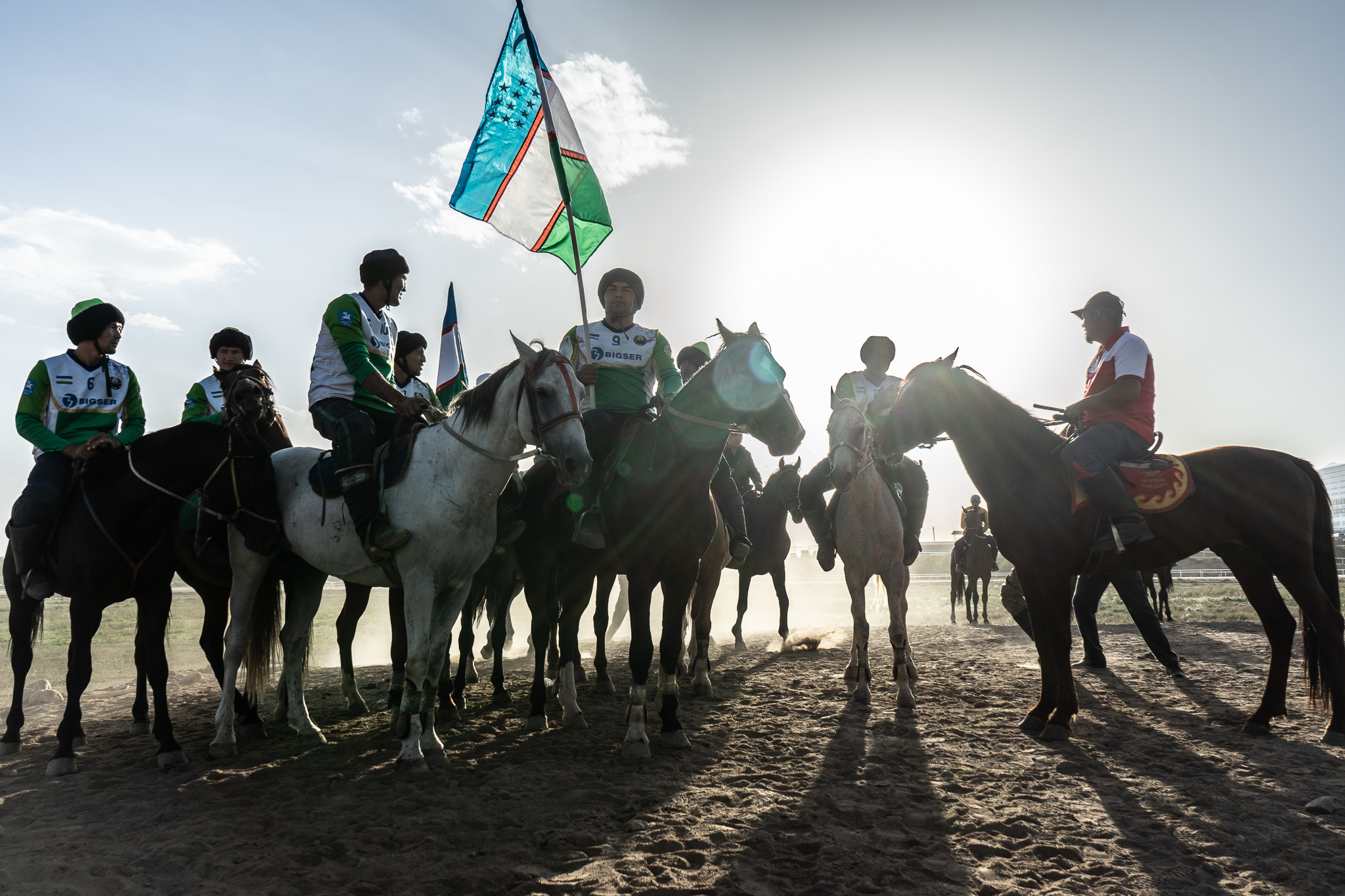 The national flags of Uzbekistan and Kyrgyzstan were flying on either side of the open-air Hippodrome on the shores of Issyk Kul Lake, as the Kok Boru players readied their horses and the crowd cheered as the commentators counted down to the start of the match.

This was the grand final of the Kok Boru at the World Nomad Games, and soon, dust would be flying, horses would be galloping, and a headless goat carcass would be hurled around the pitch as both sides fought it out for victory. 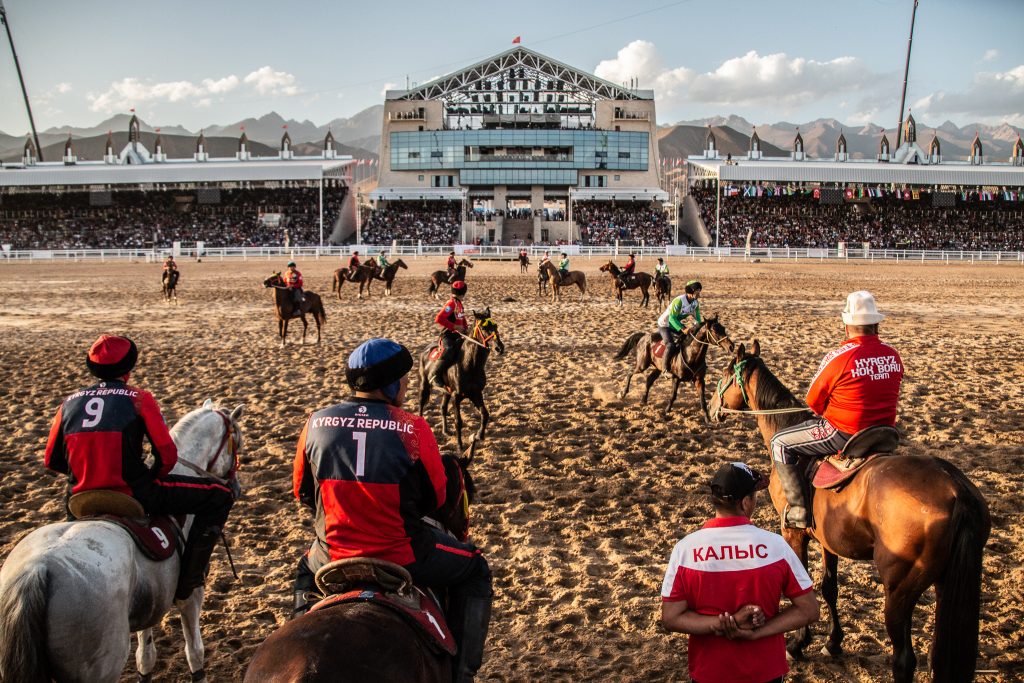 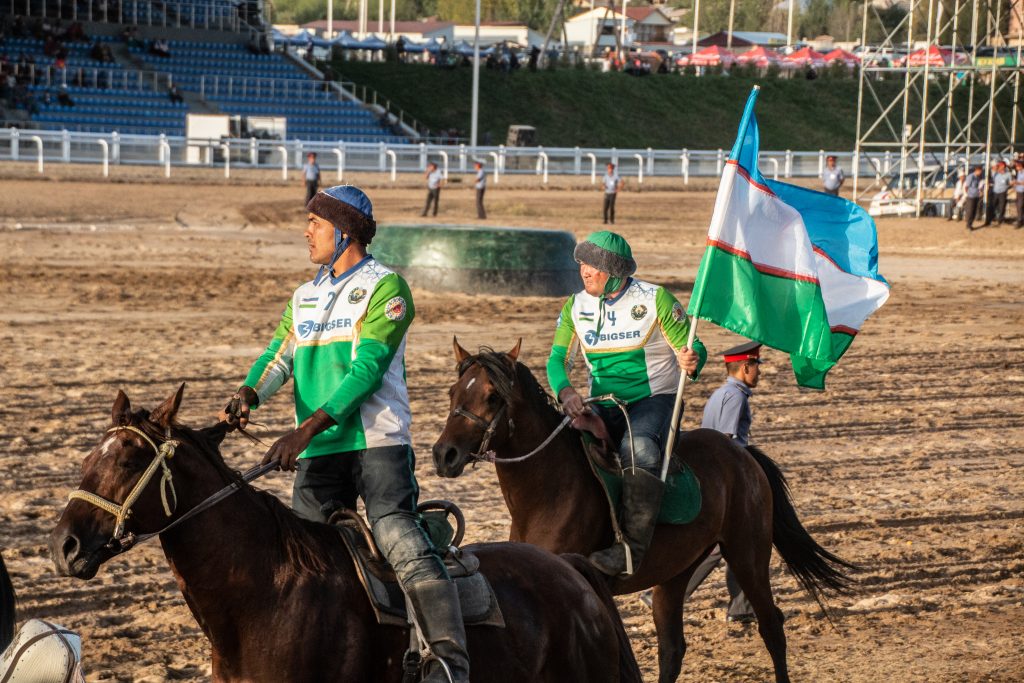 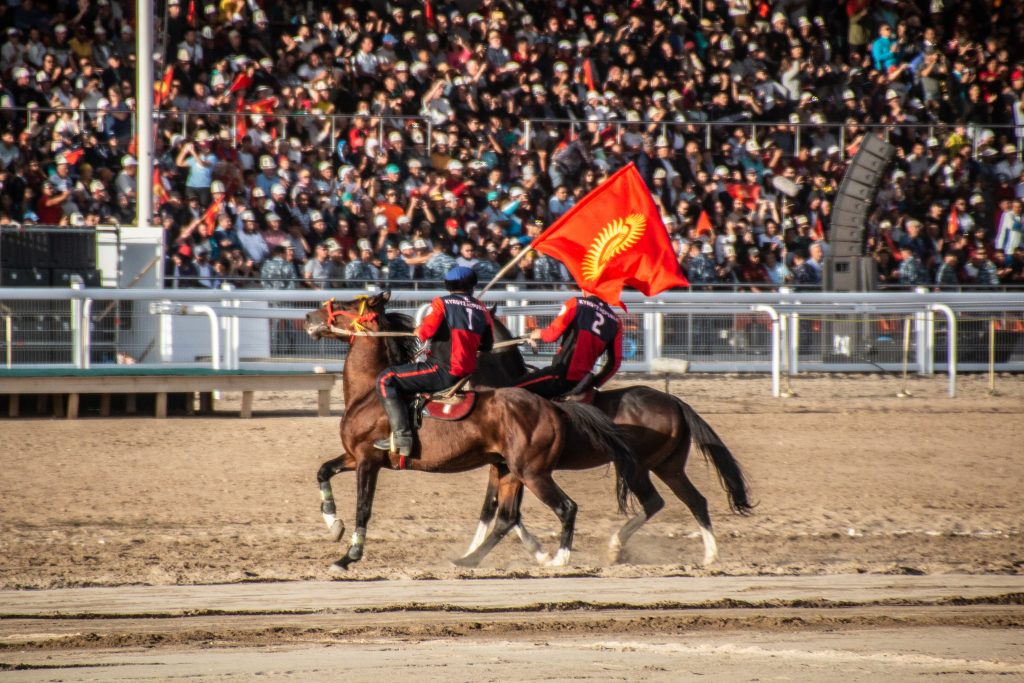 What in the world is Kok Boru? Many of you reading this article might well be asking that very pertinent question, because this is a sport that is not well known, that is not widespread and that few countries actually play.

Kok Boru is a traditional nomadic sport that originated on the steppe of Central Asia. It’s played on horseback and although are many tales and legends of the origins of this unusual sport, it’s generally assumed that it was played by warriors as a demonstration of all that it meant to be nomadic, to practice horsemanship, strength, skill and to show their courage.

The rules vary across the region and in Tajikistan and Afghanistan the game is known as Buzkashi and is played between entire villages, while in Kyrgyzstan and Kazakhstan, the rules have been refined and teams put out only four players at a time. Players battle it out to grab hold of the heavy, headless, dead goat carcass before racing across the pitch to throw it into a bin to score a point. It’s variously been described as dead goat polo or dead goat rugby on horseback, as it combines many elements of many games that may be familiar in the western sphere, yet it remains uniquely nomadic in character, and there are few other sports that even come close to the intensity of this game. 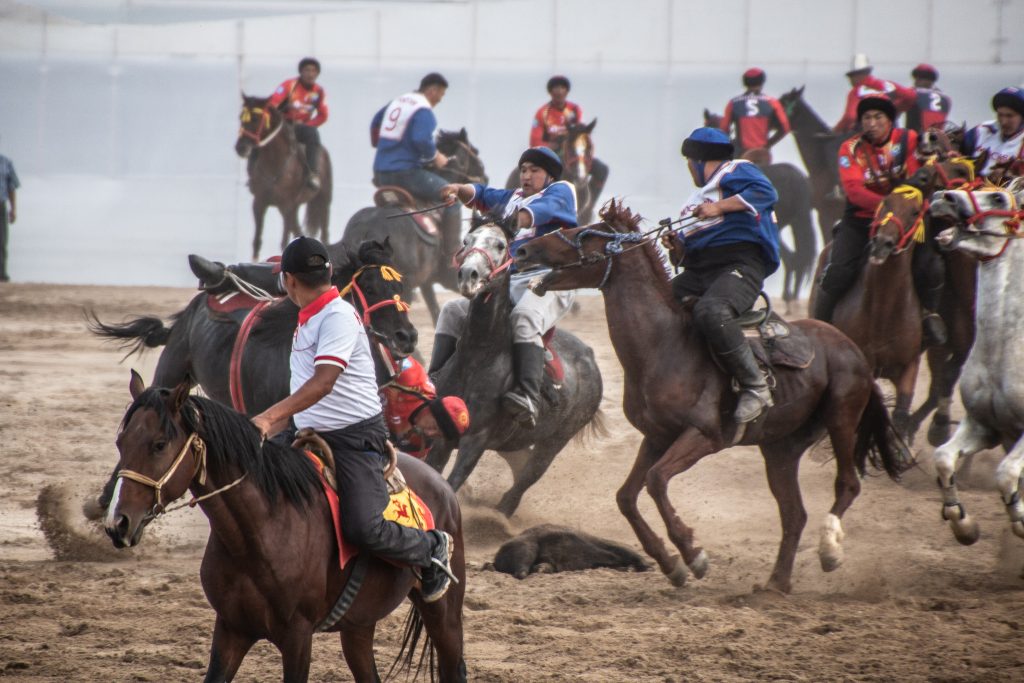 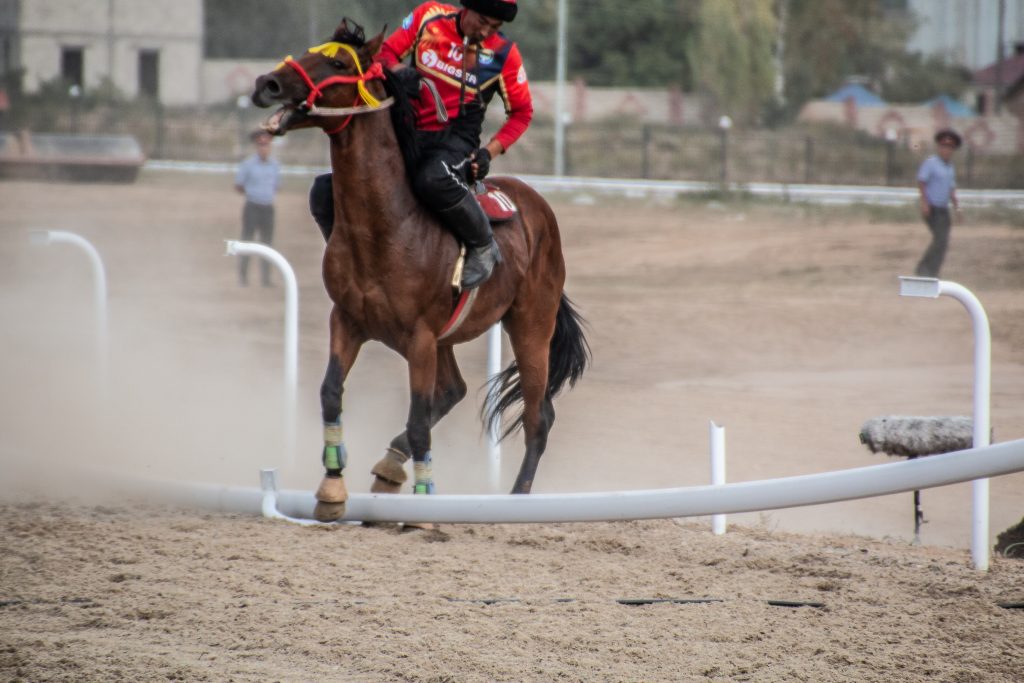 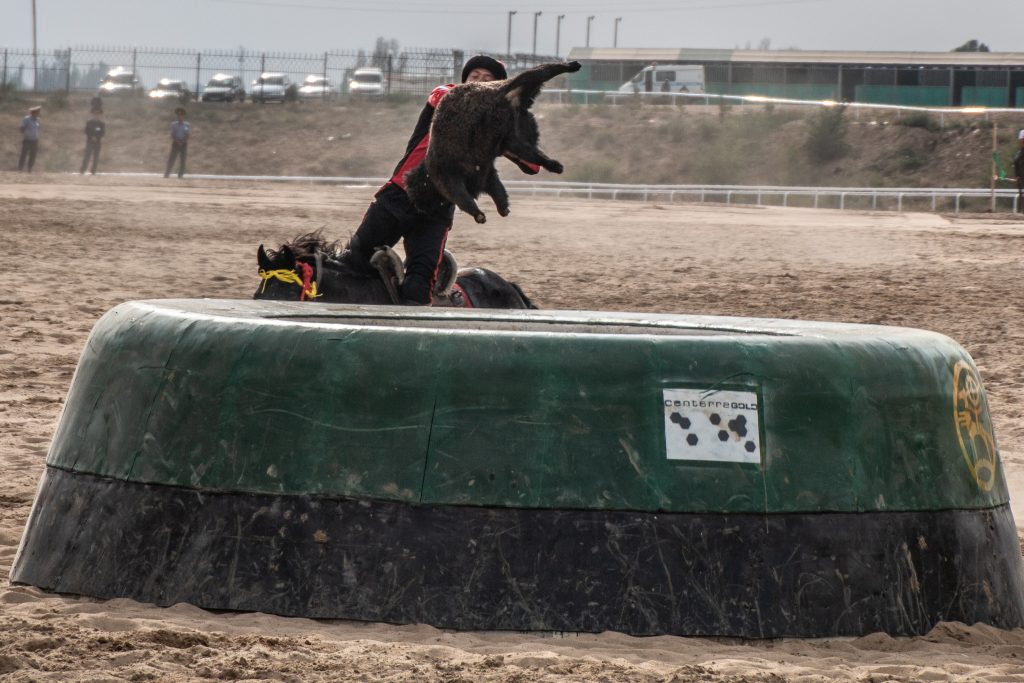 The Group Stages of Kok Boru at the World Nomad Games

It was Kyrgyz rules that were being played at the World Nomad Games in Issyk Kul, and although it looked as if these rules were simple, the best teams employed the best players from their national scenes, the best horses and had the right tactics to go with it.

Surprisingly, Kok Baru’s unusual nature is beginning to endear it across the world, and more teams than ever had entered into the tournament in Kyrgyzstan. As well as the expected teams from Uzbekistan, Kyrgyzstan, Kazakhstan, and Afghanistan, there were teams from France, Mongolia, parts of Russia and the USA, split across four different groups.

The hosts and defending champions Kyrgyzstan had an easy route to the semi-finals, as their opposition withdrew from the opening game, while a Russian team from Moscow comprised of ethnic Kyrgyz players, joined the hosts in the semis alongside Kazakhstan and Uzbekistan.

The US and French teams, although extremely limited in any experience of the game – many were playing for the first time ever – put on resilient performances given the circumstances, although ultimately both lost heavily. 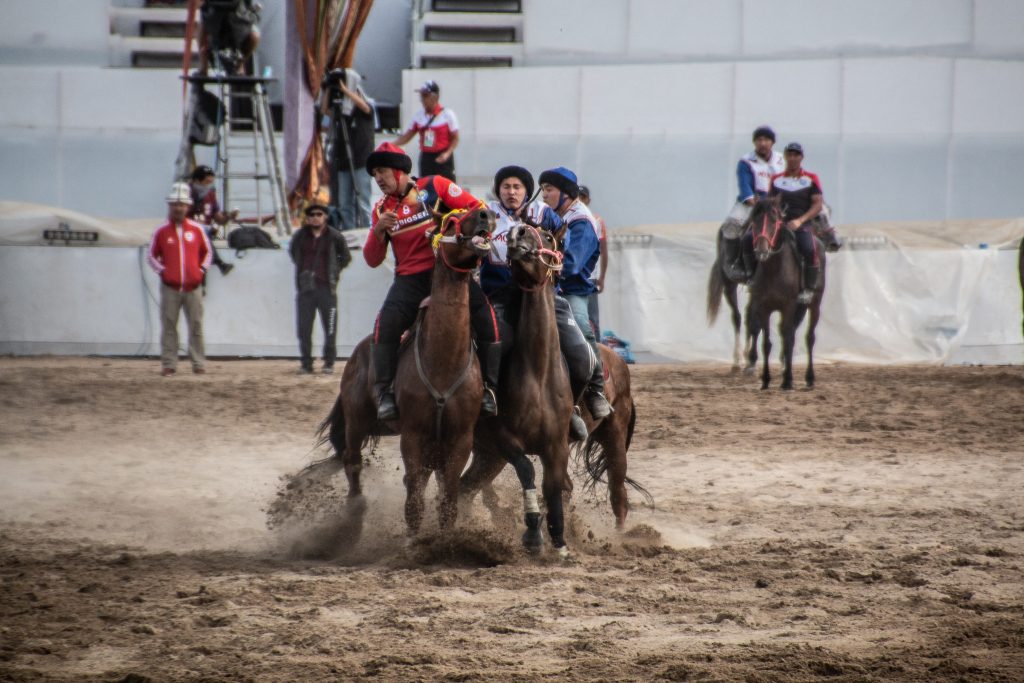 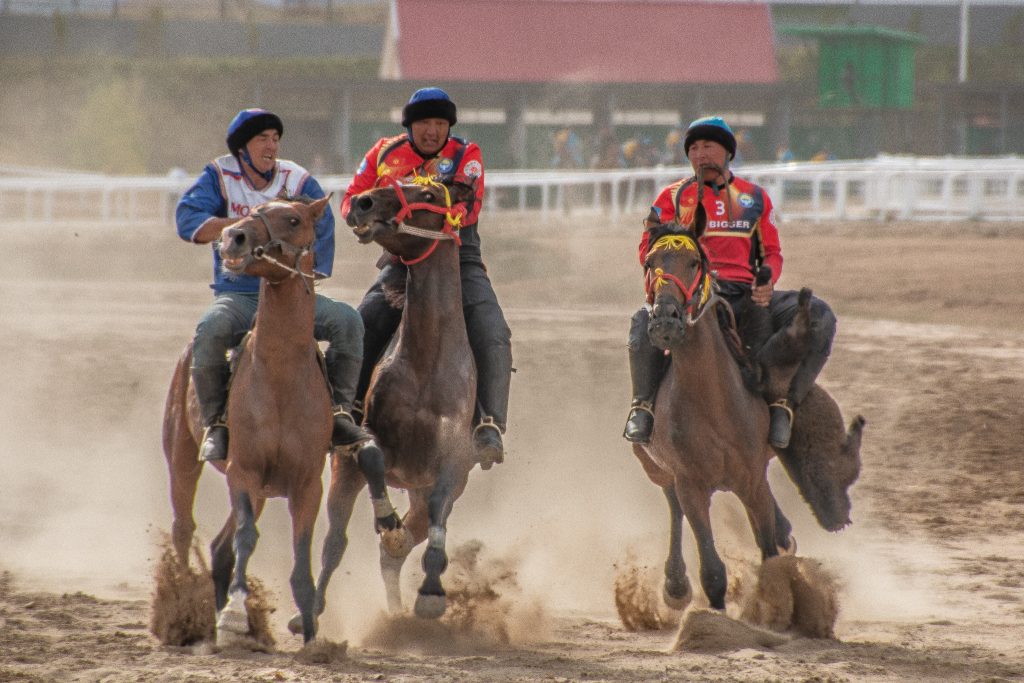 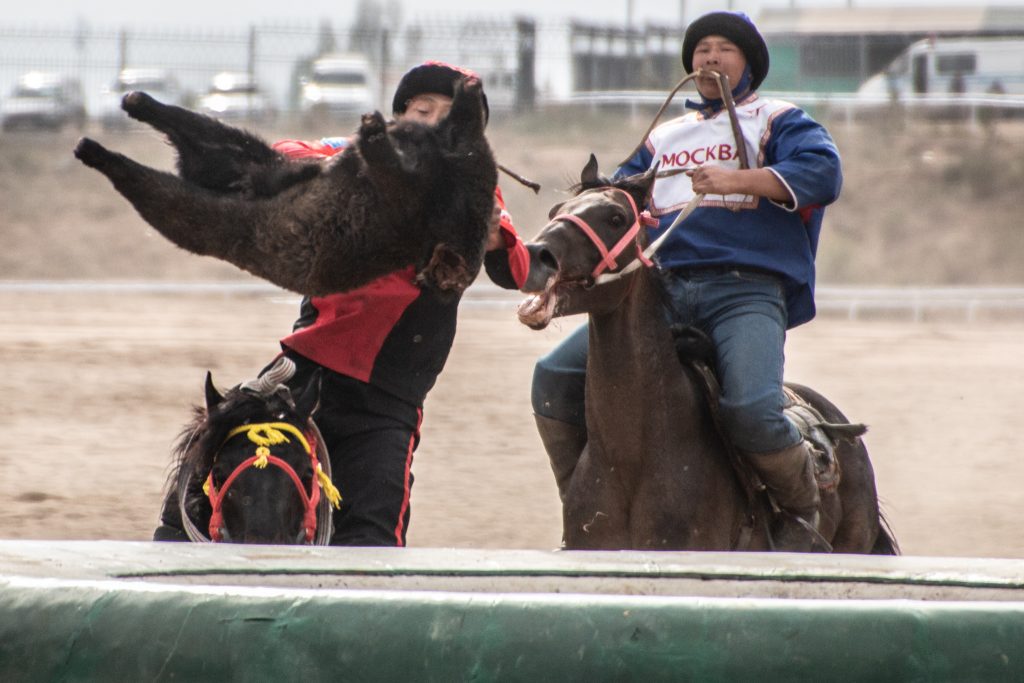 At the Hippodrome, Kyrgyzstan went on to annihilate the Moscow team in the semi-final. Out playing and outpacing their opponents throughout the game to much applause from the home crowd. There was much talk of dodgy horses and home advantages as the hosts went through.

Kazakhstan played Uzbekistan before this game, and although Kazakhstan were contenders for overall victory, being world champions, they fought a bitter match with underdogs Kyrgyzstan. This was real, brutal Kok Boru, and each point was hard earned. Rather than the whitewash scoreboards I’d seen in the opening games, this fight went onto the last minute and ended with a last-minute point for Uzbekistan, who beat Kazakhstan 5-4 to go through to their first ever final. 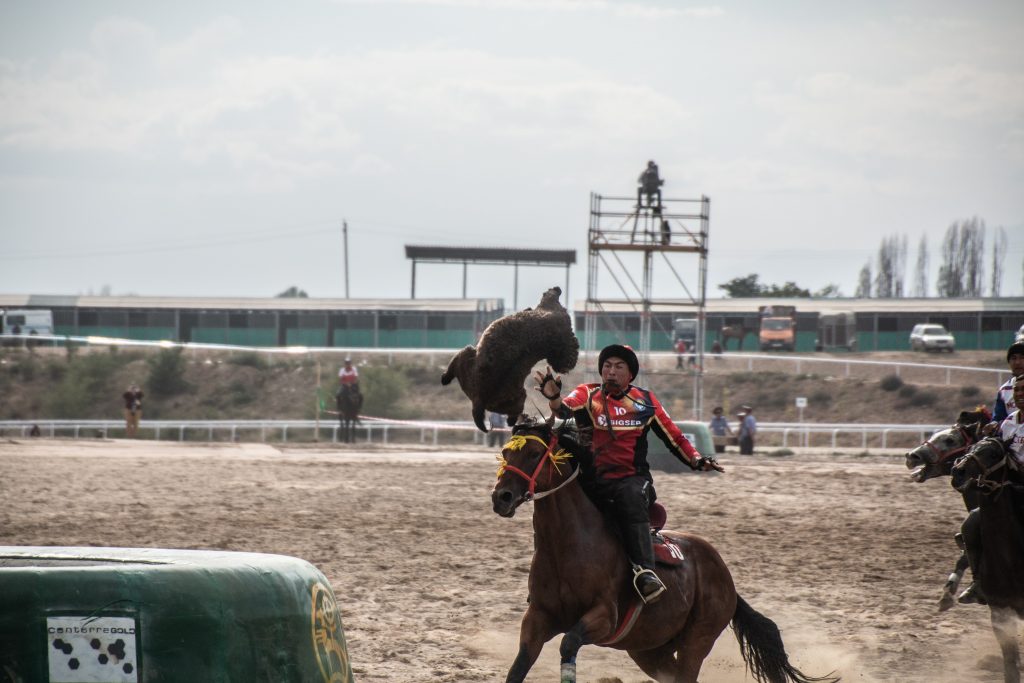 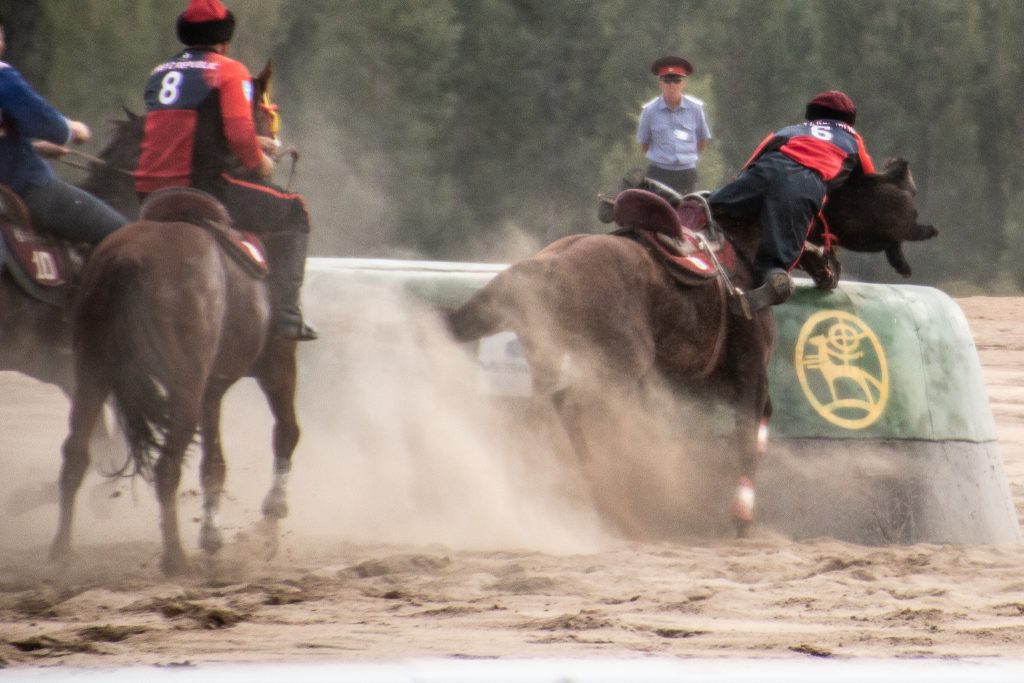 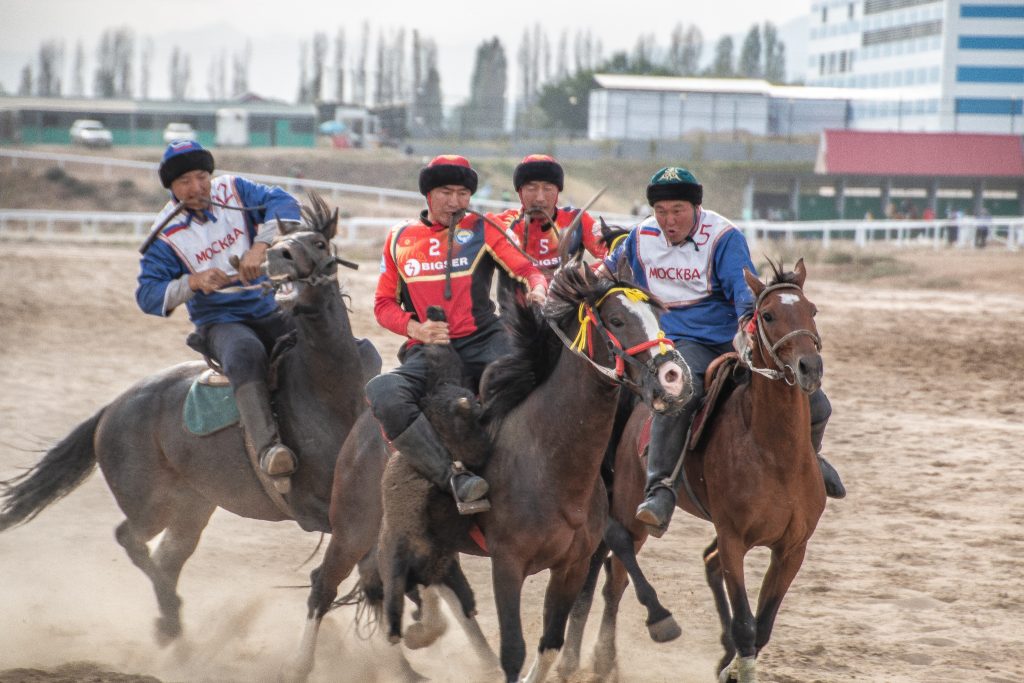 The Grand Final of the Kok Boru

The final of the Kok Boru was the real highlight of the World Nomad Games. This is the national sport of Kyrgyzstan and the stands at the Hippodrome were packed out in anticipation. Not only was nomadic glory up for grabs, but a huge prize fund that would give the winning team 3 million Kyrgyz Som, an amount equivalent to over 40,000 USD, and in Kyrgyzstan, a huge amount of money even when split between all the players.

Kyrgyzstan was the firm favorite, having won the competition int he previous two editions, and having what some would call a much one-sided home advantage – they had the pick of the horses and the referees were, of course, Kyrgyz.

Despite this, there was some hope for the underdogs Uzbekistan after their fine display against Kazakhstan the day before. Kazakhstan went onto win against Moscow int he third place playoff before the grand final, destroying the opposition and regaining some pride and cash prizes. 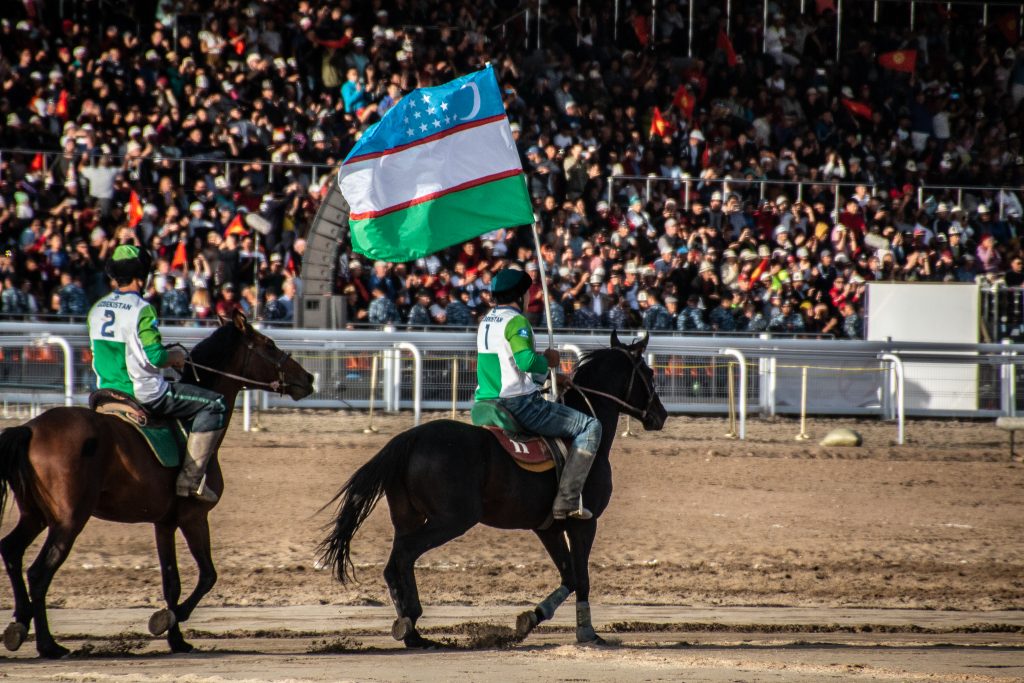 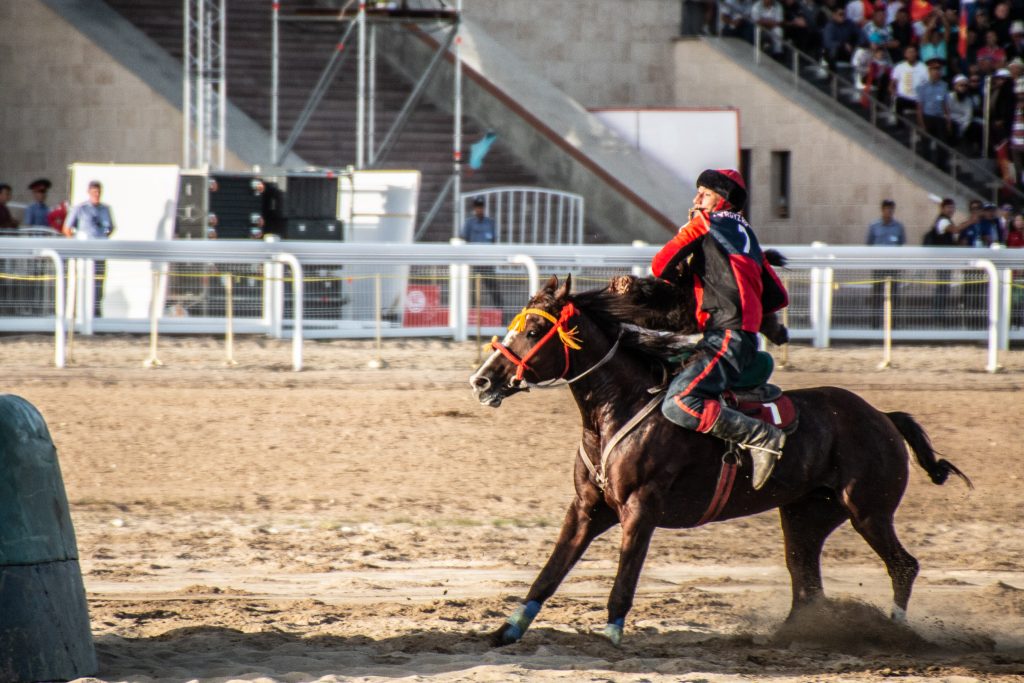 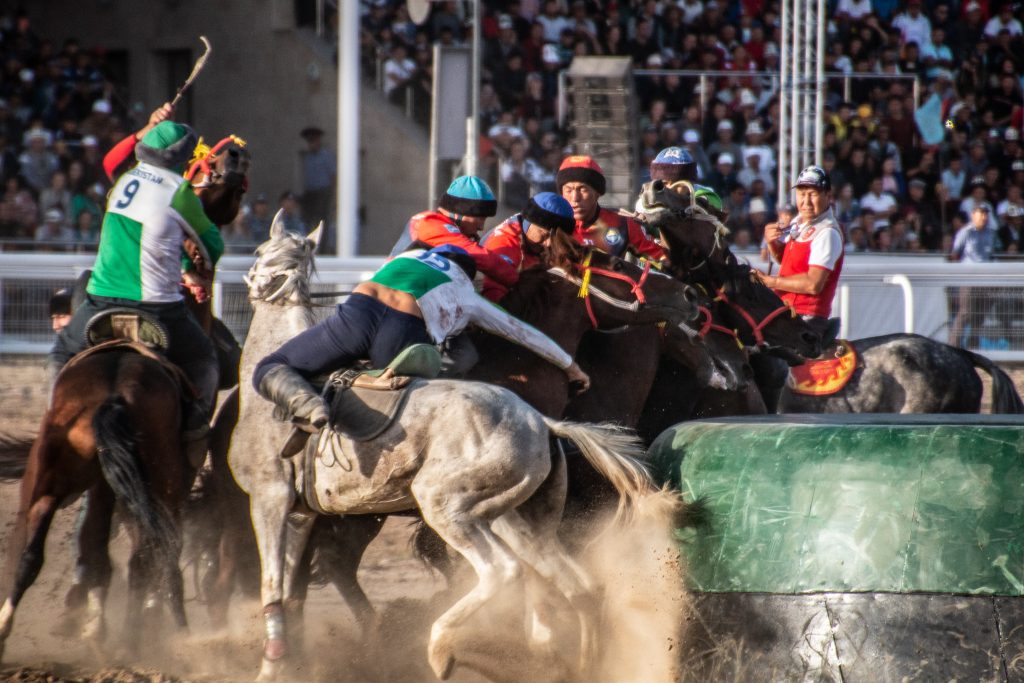 The players lined up on either side of the pitches, waving their national flags as the final began in the late afternoon. The commentator was riling up the crowd as the players mounted their horses and galloped across the pitch in front of the stands, before shaking hands with the opposition and beginning the fight to make nomadic history.

Soon though, it became clear that this would not be the match of Kok Boru I was hoping for. Kyrgyzstan, on their powerful horses, began cutting apart the Uzbekistan line as soon as the dead goat carcass was first dropped onto the pitch. The Kyrgyz crowd was happy, as they would inevitably win another victory, but those rooting for Uzbekistan or hoping to see a real clash of Central Asian teams were left disappointed. 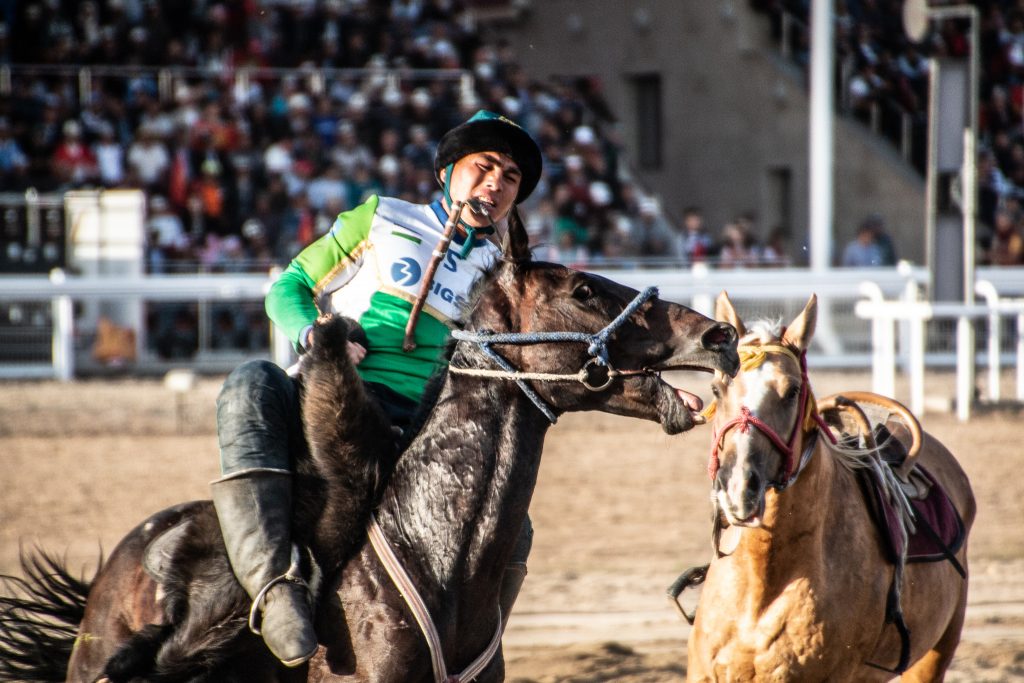 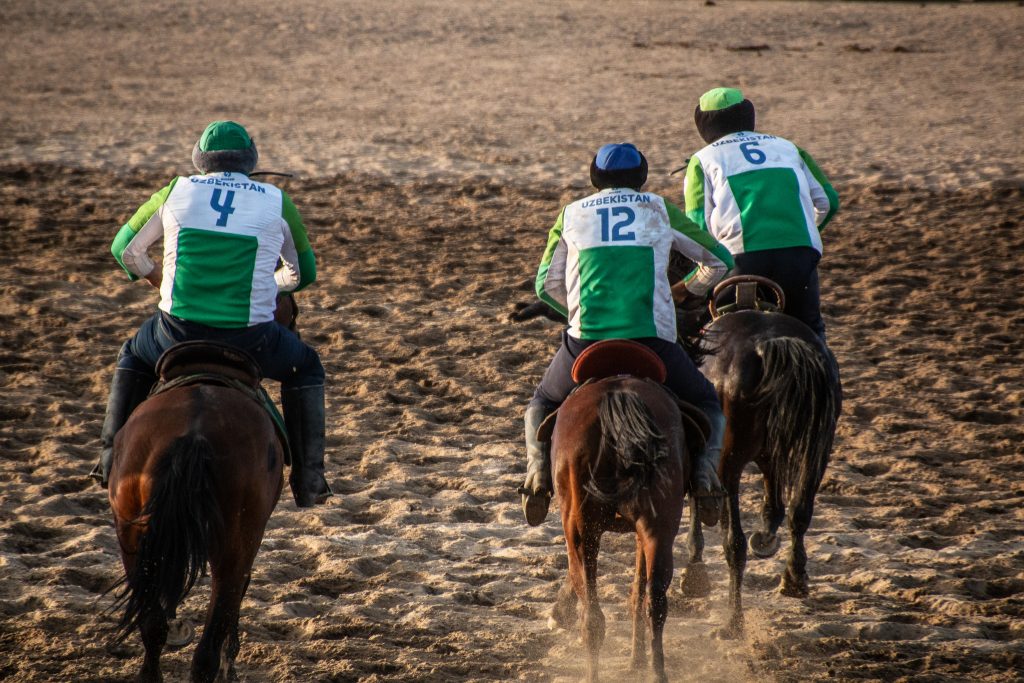 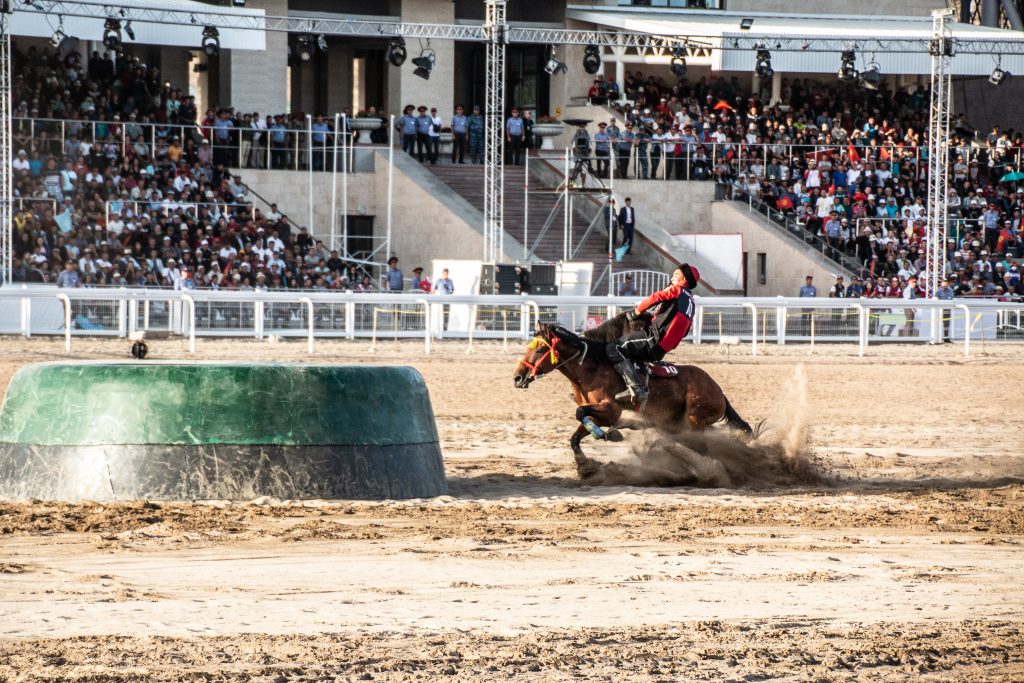 Within the first two periods, the game was done. Uzbekistan, despite glimpses of skill and agility, were heavily trailing. By the third and final twenty minute period, it was long over, and the Kyrgyz players began slowing down, seemingly galloping from end to end with the dead goat to score point after point as the sunset on the shores of Issyk Kul Lake.

By the end of the match, the final score was 32-9 to Kyrgyzstan. The hosts and locals had secured their third victory at the World Nomad Games. They would be called the best nomads and would feast on the dead goat carcass long into the night while those who weren’t celebrating another Kyrgyz victory questioned the legitimacy of the winning tactics and play. 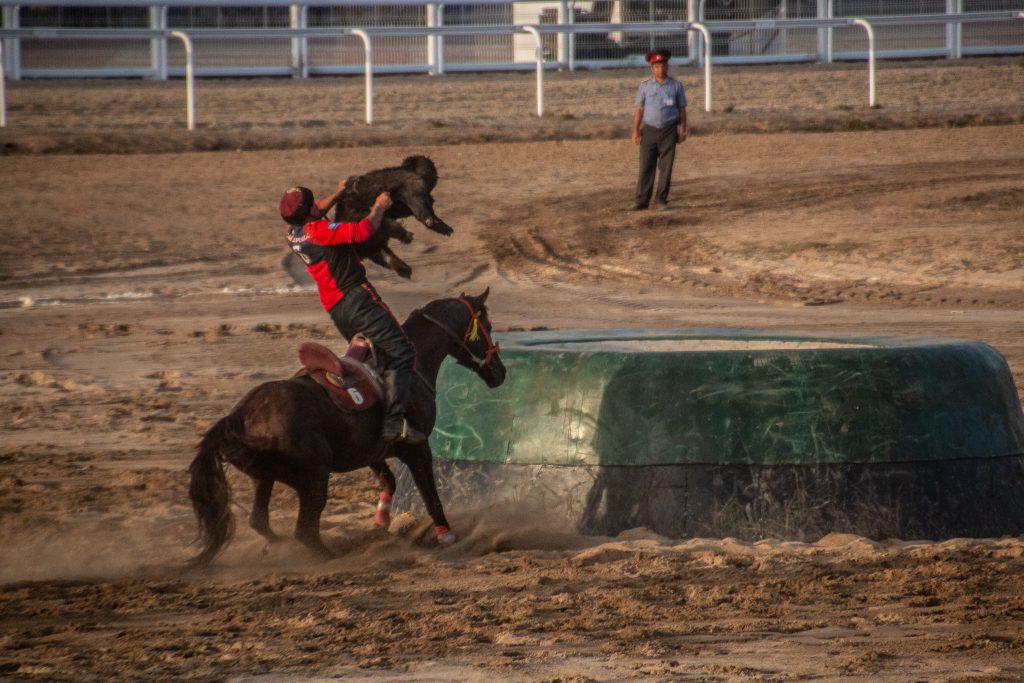 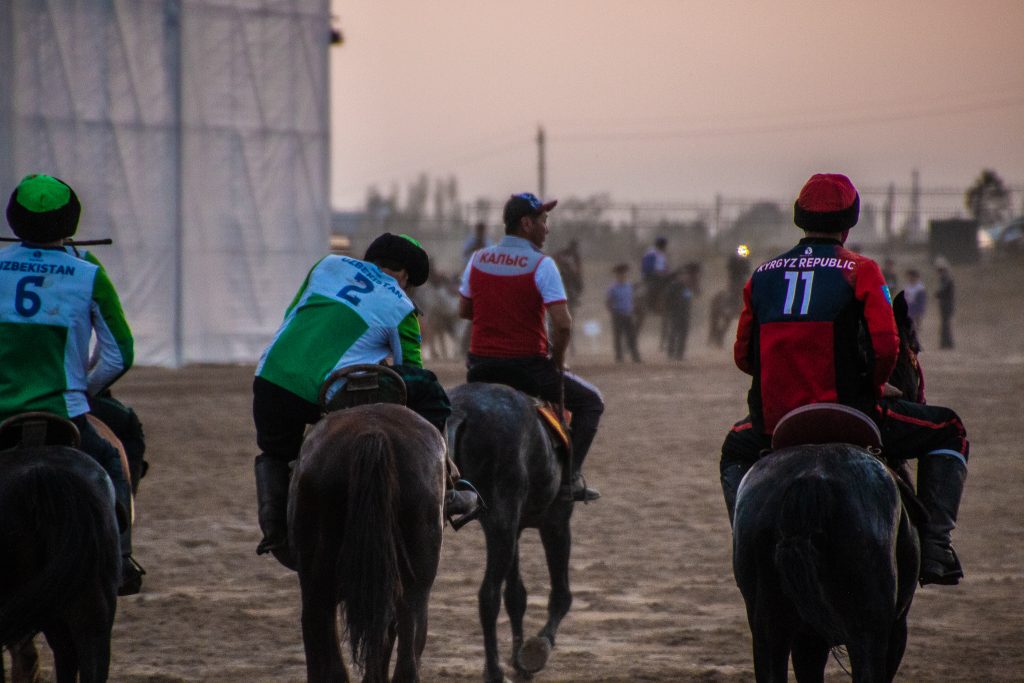 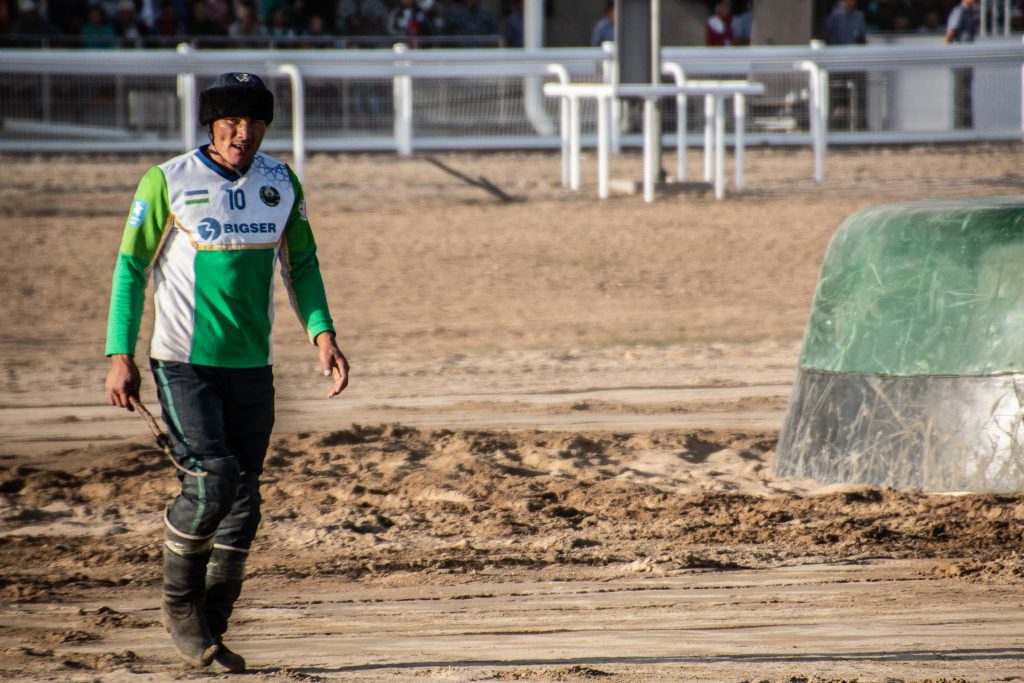 You can see more pictures from the World Nomad Games Opening Ceremonies HERE!