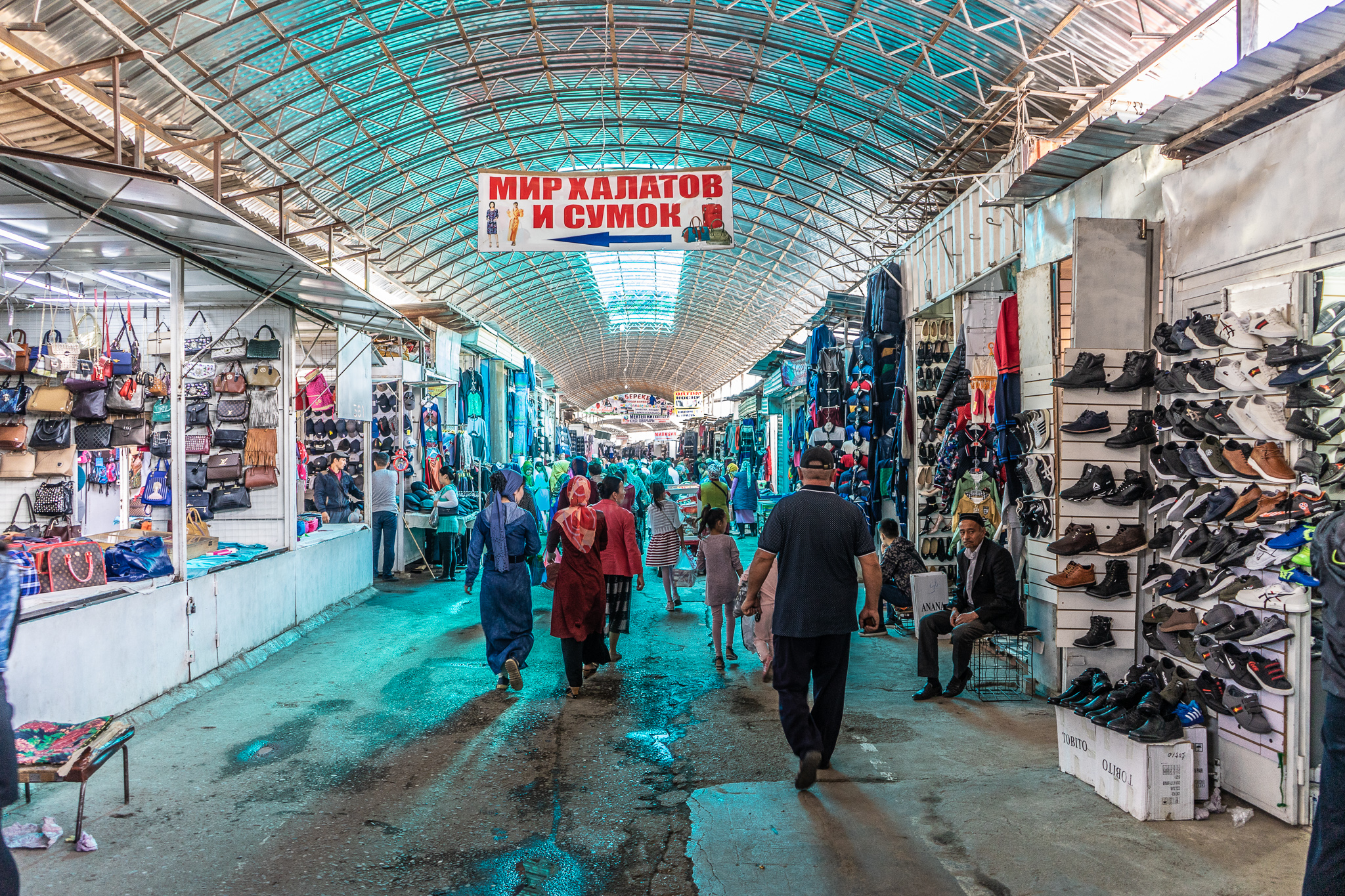 Hidden under a drab, unassuming concrete bridge that crosses over the Ak-Buura River in the city of Osh in southern Kyrgyzstan is one of the largest marketplaces along the Silk Road.

This is the sprawling Jayma Bazaar, a place that stretches for over a kilometre on both sides of the river and a place that contains thousands of market stalls, shops and traders doing business every day of the week.

Until I had crossed directly under the bridge though and had fumbled my way along narrow alleyways did I even realise that I was in the market itself. As hidden as this enormous bazaar is, equally shrouded in mystery is the long past of the city of Osh and the importance of this market in Central Asian history, because as well as being one of the largest markets on the Silk Road, this is also one of the oldest. On the first inspection though, none of this was readily apparent.

The entrance widened into a dimly lit and equally unassuming corridor, but along the length of the concrete flooring, stacked against the sides of the hallway were row upon row of old shipping containers, and each shipping container opened up into a shopfront.

Overwhelmed by the noise, the colours, the smells and the chaos, I simply pulled out my camera, took a deep breath and began my journey through the Jayma Bazaar. 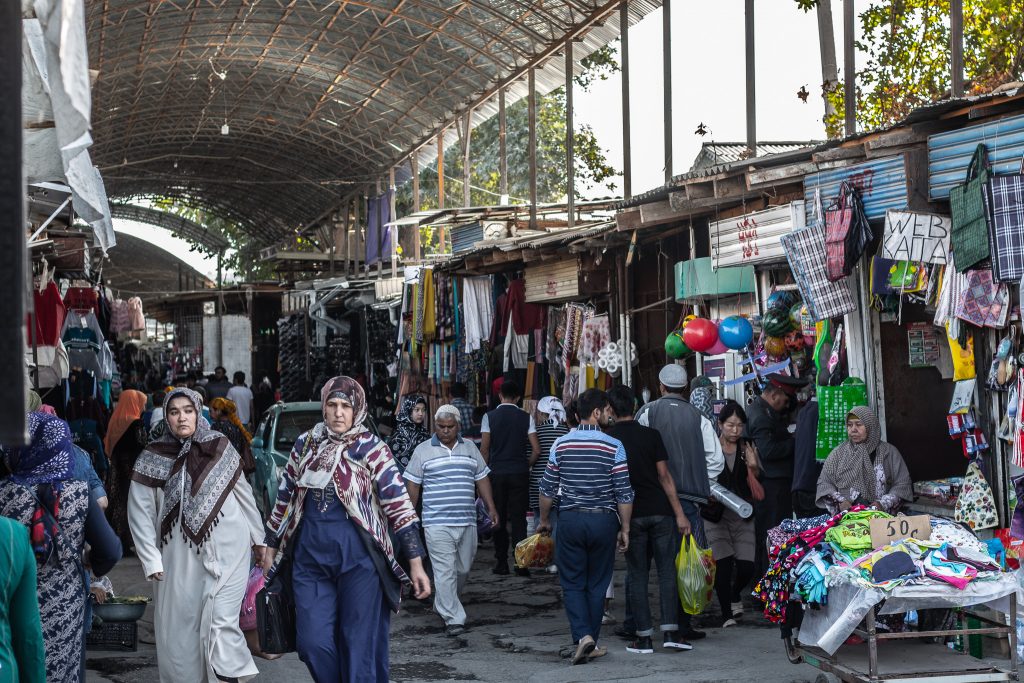 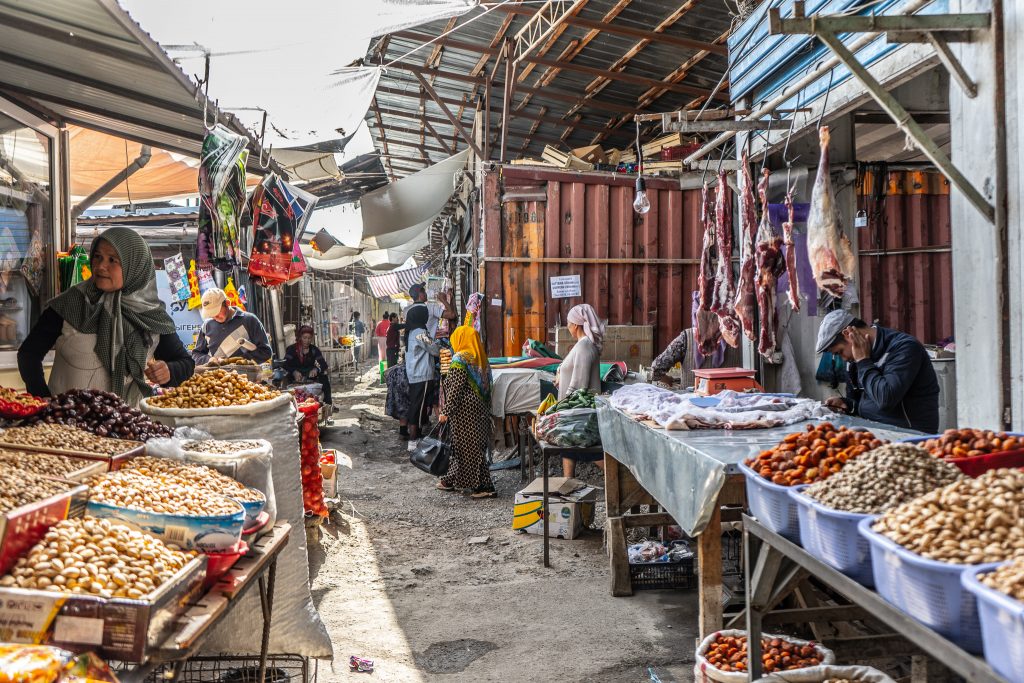 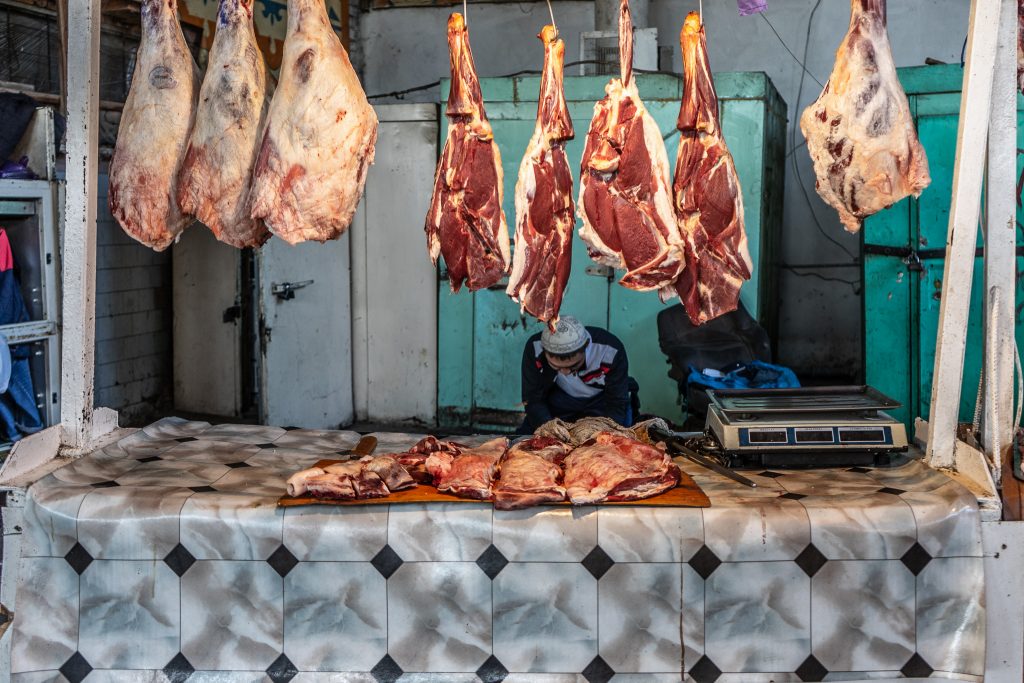 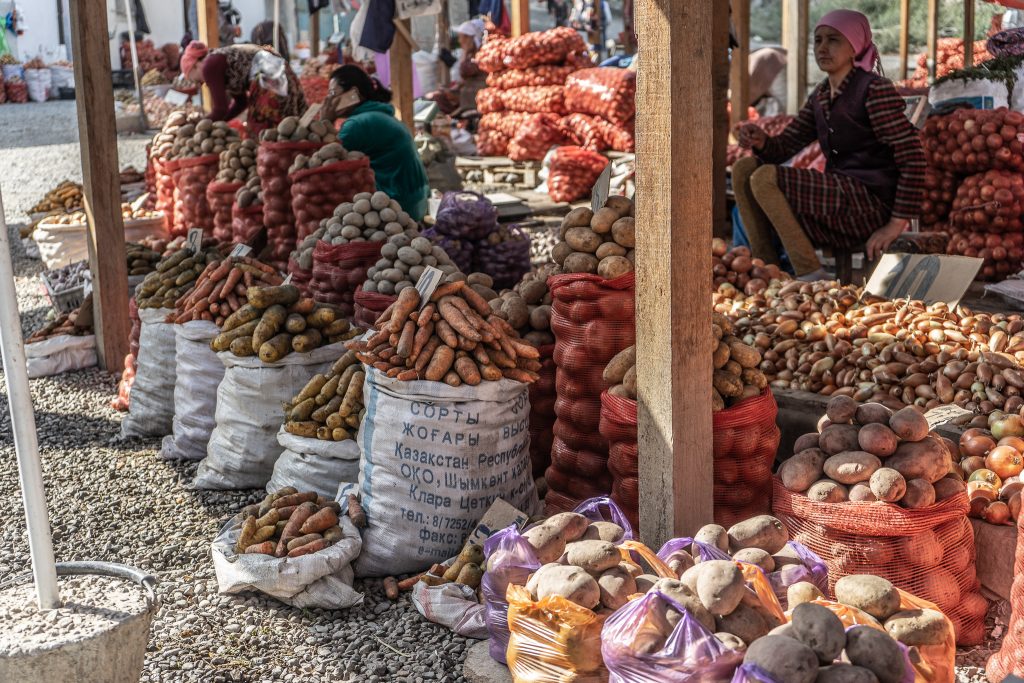 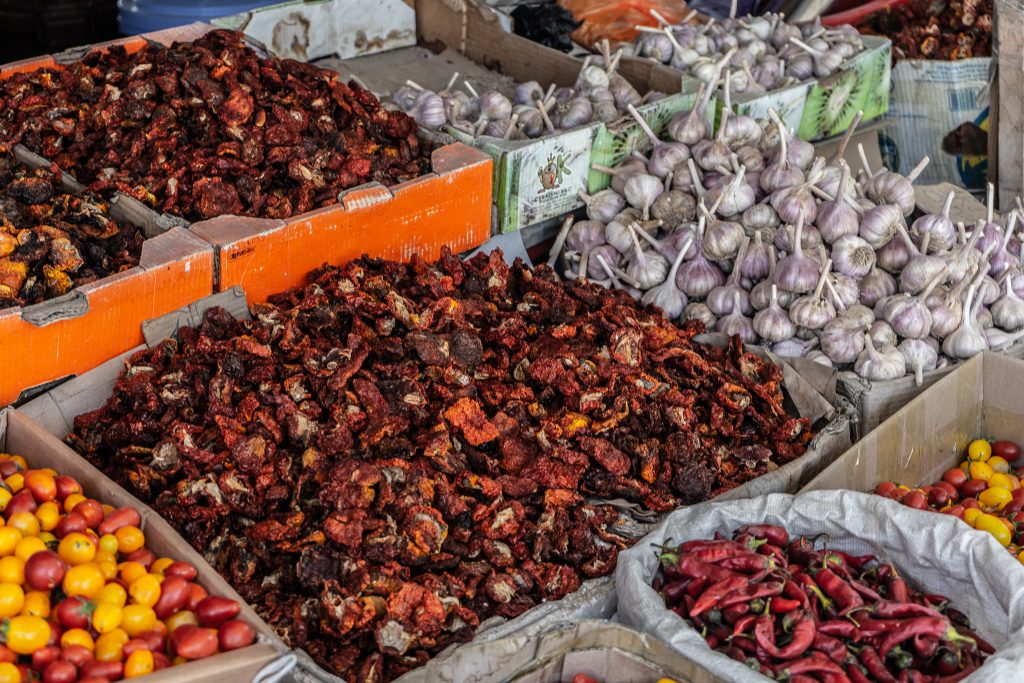 I was visiting Osh, the second largest city in Kyrgyzstan and the centre of the southern region of this Central Asian nation. Osh is a long way from Bishkek, the capital. To get here requires either an arduous cross-country journey along dangerous, winding mountain roads or a flight over the rugged, snowy peaks that separate Osh from Bishkek.

The two cities are very different. Bishkek is relatively new. It might be the capital of modern Kyrgyzstan but as a city, it has only been in existence for less than two hundred years. Osh, on the other hand, has a history that stretches far back over 3000 years, and it has long played an integral role in the development of the region’s politics and business over that long period of time.

Osh has a huge ethnic Uzbek population, whereas Bishkek is predominantly Kyrgyz in makeup, while  Osh takes its inspiration from the wide Fergana Valley it is part of that facilitated the ease of trade along the Silk Road for centuries.

This extensive history though is difficult to find in Osh. There are few relics of the ancient rulers that carved their kingdoms from the deserts, steppe and mountains of Central Asia. This is no Samarkand or Bukhara, and few legends have survived that tell the tale of this city’s past.

The Soviets were of little help even, supposedly destroying many historic monuments or shrines that were linked to Islam, a religion they looked to suppress.

Osh was carved asunder and despite its majority Uzbek population, was placed under the auspicious rule of the Kyrgyz SSR. Today, it’s a multiethnic city, a place were tensions built over decades occasionally boil over into riots or violence but a place that for the most part continues to thrive as it has always done on the Silk Road.

Despite this lack of visible historic architecture or relics from the past, the Silk Road is very much alive in Osh. Like the rest of the history of the city though, 3000 years of almost untold events are hidden under the surface, but I found it all, quite literally hiding under the concrete bridge over the river by the Jayma Bazaar. 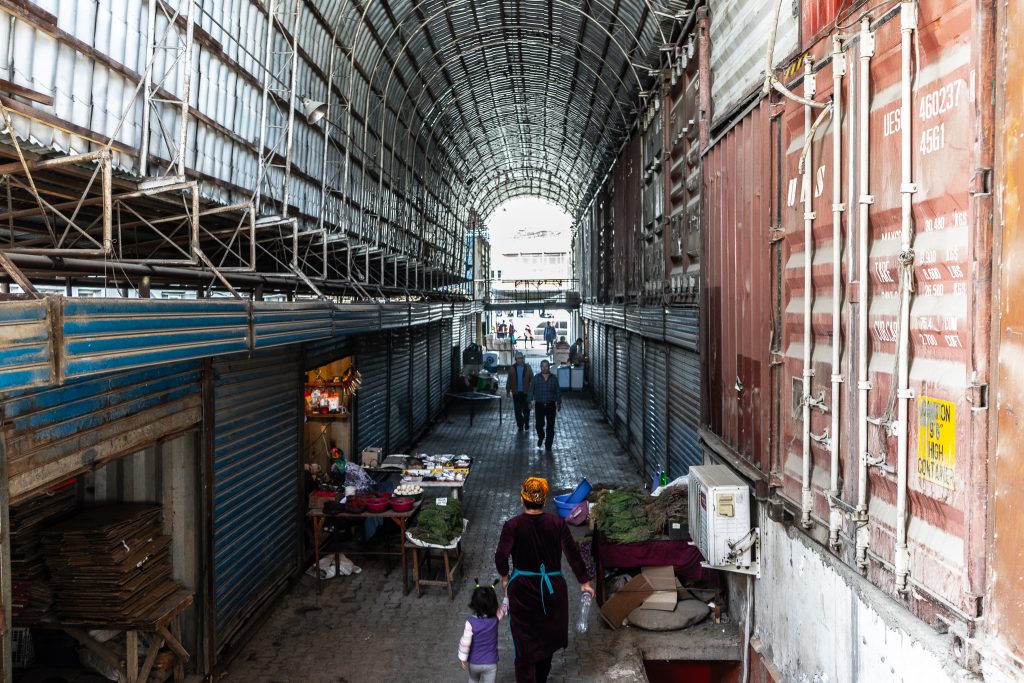 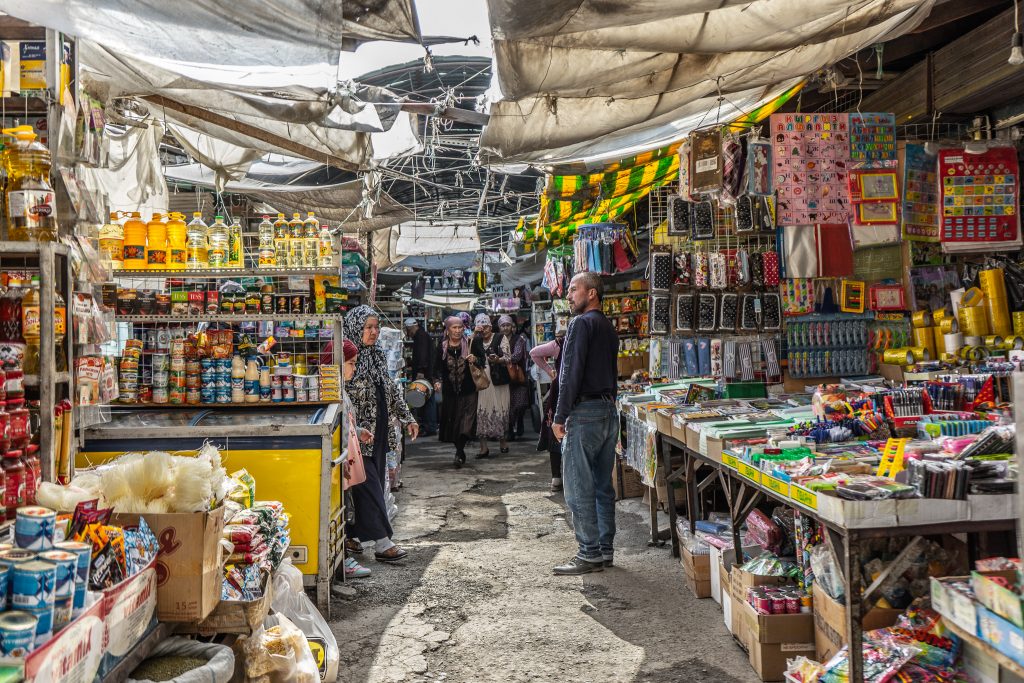 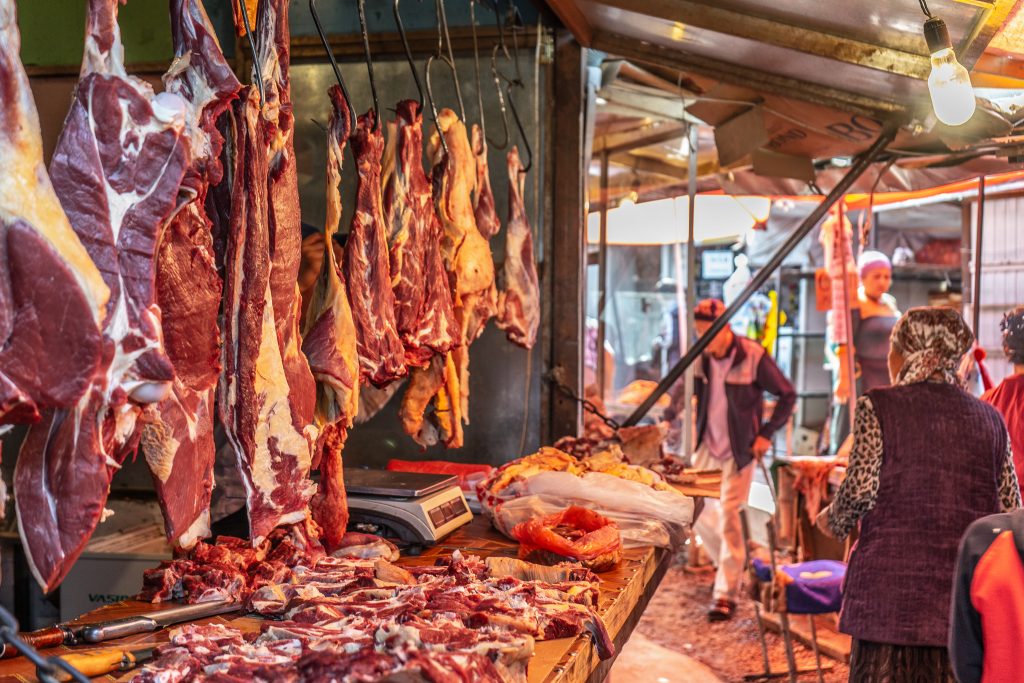 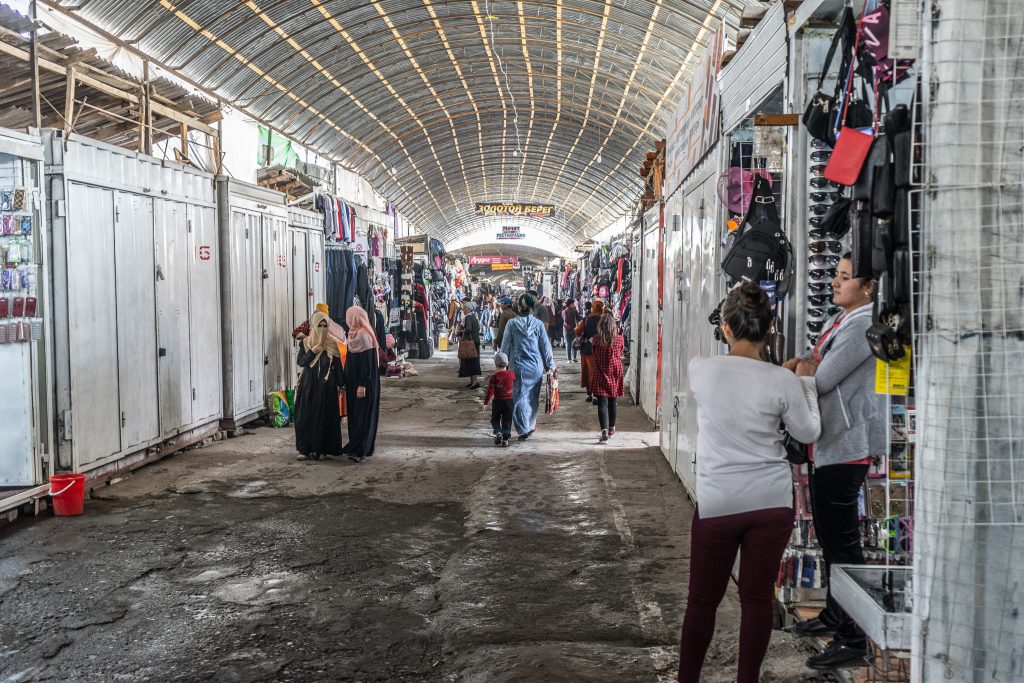 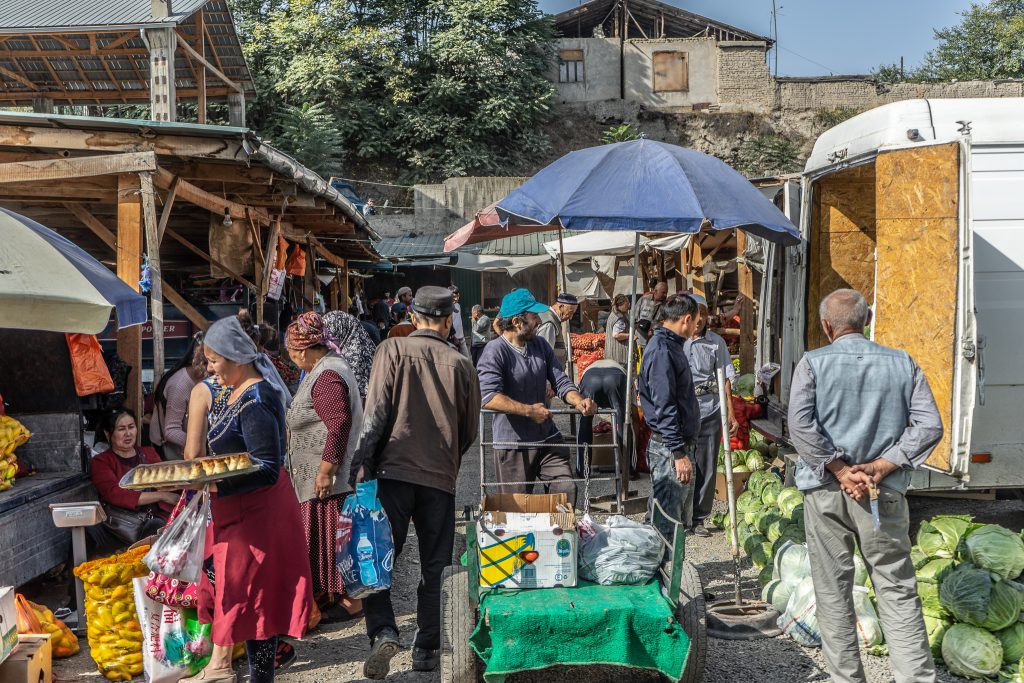 Trade has always been an important aspect of life in Osh. The city lies almost at the centre of the Silk Road, halfway between eastern China and Europe. From Osh, goods could flow across the Fergana Valley to the west, and they could arrive from the east over the mountains.

The Soviets attempted to industrialise the region and when the Union eventually collapsed in the 1990’s, Osh found itself suffering economically. The city lies just a few kilometres from the border with Uzbekistan and while this was a free and open border during the communist era, after independence it became heavily restricted and still today poses a hindrance to the movement of goods and people across lands that were once free to travel.

Osh though, soon turned back to the ways of old, to business as it had been done for thousands of years before the fleeting impasse of the Soviets disrupted it, and today, the Jayma Bazaar once again forms the heart of the city and of trade in the region.

The sprawling marketplace can claim to be one of the largest in Central Asia, and I soon found myself lost amongst the stalls and narrow alleyways of this ancient bazaar. 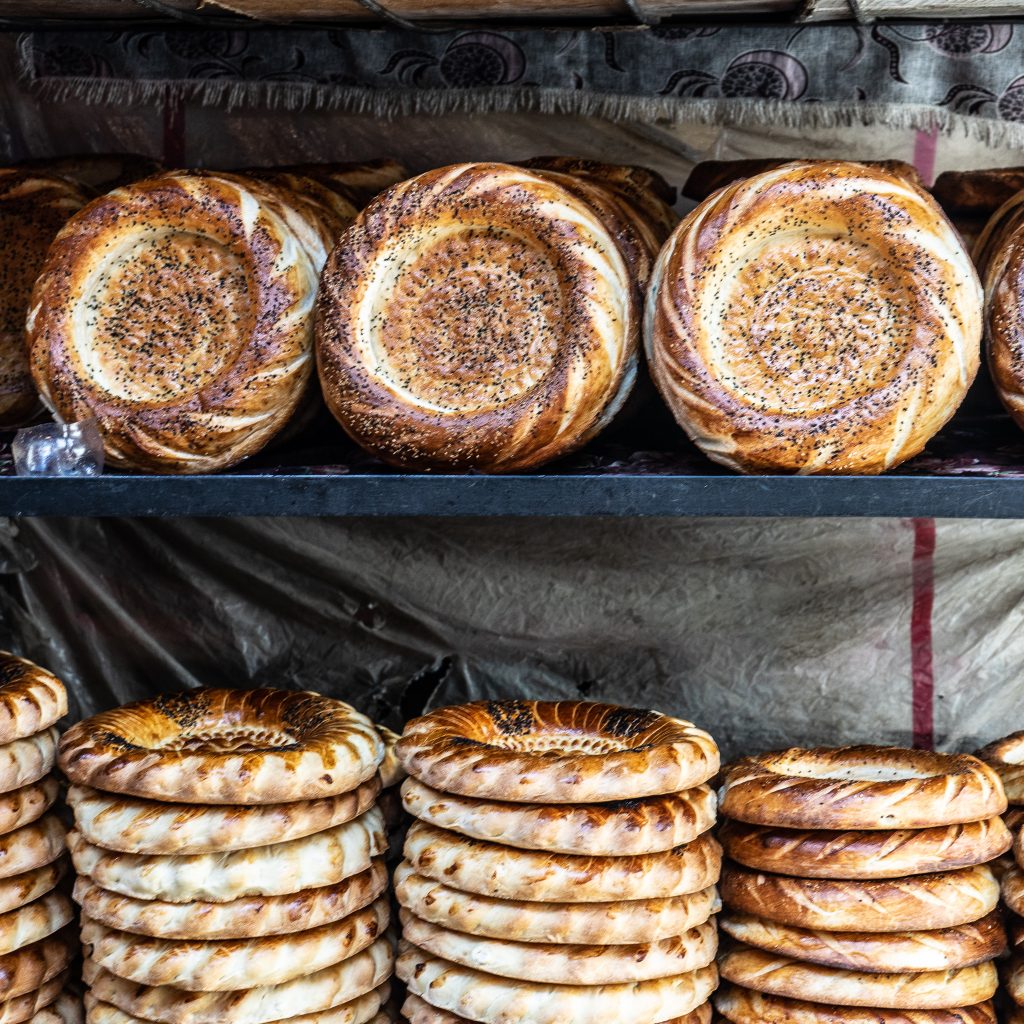 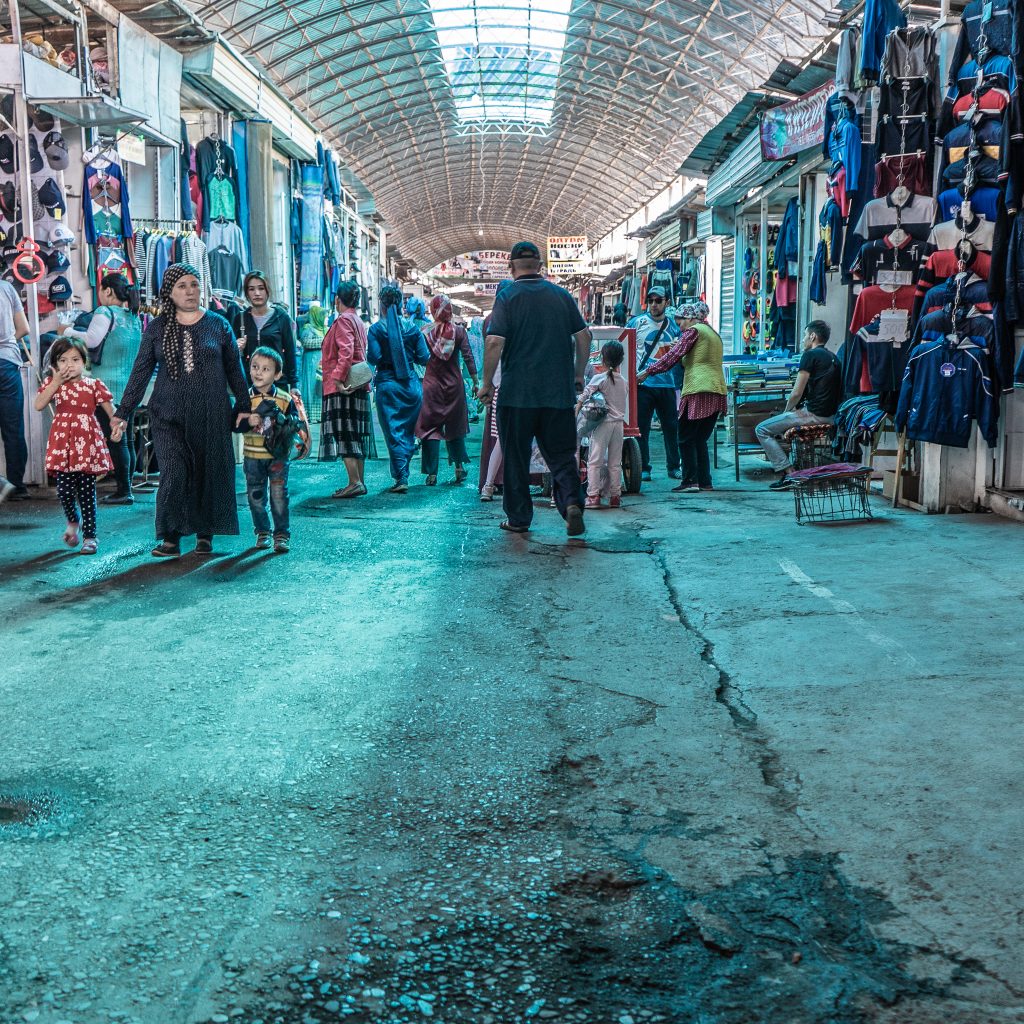 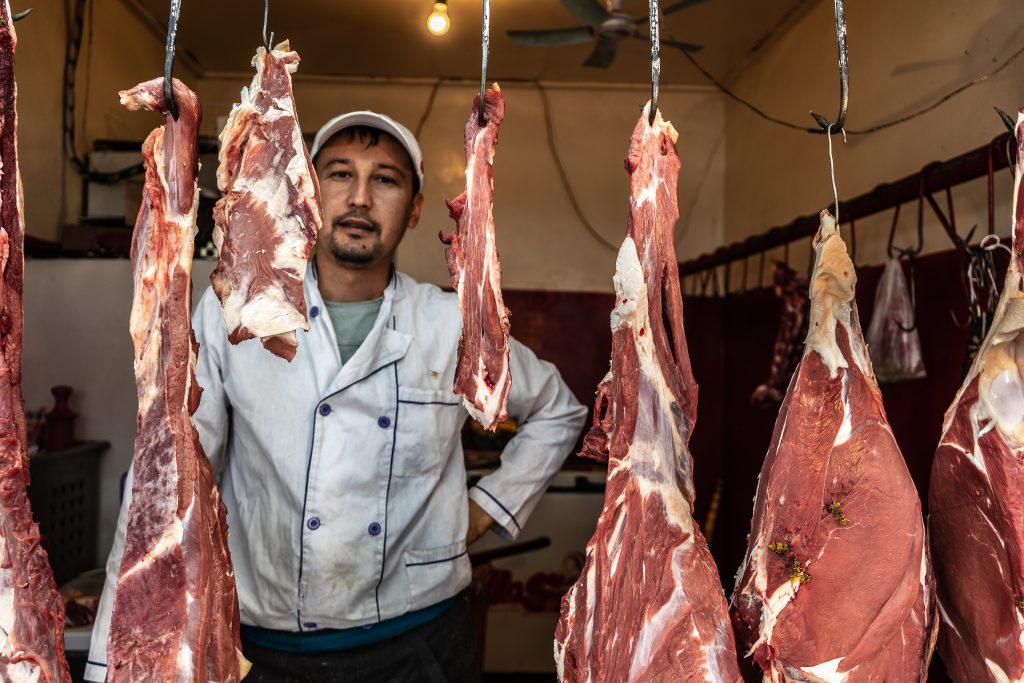 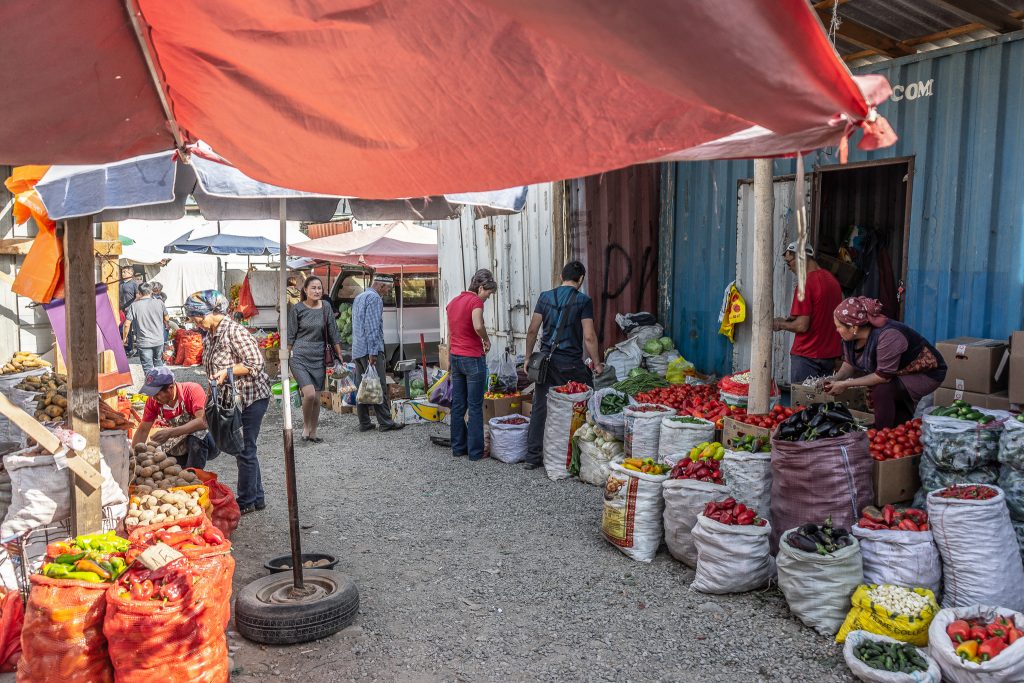 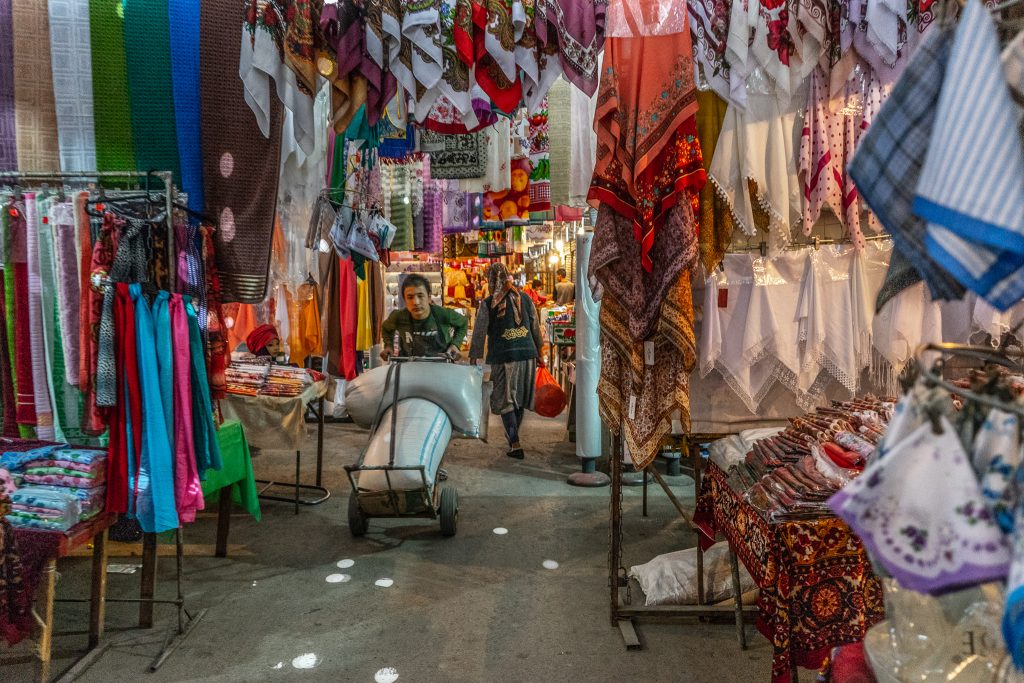 Where History Collides With Modernity

The smell of roasting shashlik and grilled kebabs wafted through the narrow corridors of the covered market, while from different stalls and shopfronts I could hear a hundred accents and voices from across the world.

While the population of Osh is almost evenly split between Kyrgyzs and Uzbeks, the city is also home to many other different ethnicities and nationalities from across Asia and the former Soviet Union.

Chinese, Indian, Pakistani, Afghan, Tajik, Russian, Ukrainian and many more diverse peoples call Osh home or travel to the bazaar to trade and to buy goods.

The market of today is built from old shipping containers scavenged from the wars in Afghanistan, or from corrugated iron sheeting or timber frames imported into the city. Many locals simply set up their stalls on the side of the road outside the main market, unloading bundles of goods or baskets of fruit, while the car park becomes its own market as farmers simply open up the boots off their old, rusty Russian cars which are laden with vegetables or even the occasional goat.

The Jayma Bazaar would be unrecognisable in shape and makeup from the markets held even a hundred year ago, but what has remained the same is the spirit and ethos of the Silk Road trade.

Alongside the accents and languages are the different dress, the different colours and even faces from east and west merging in the cramped corridors. It’s loud, busy and chaotic and in that respect, little has changed from two thousand years previously.

I walked through the colours, the noise and the smells of the market and I knew that despite the lack of tangible history in Osh, this was a city that best epitomised the long traditions and culture of the Silk Road. This is where history collides with modernity, and for a traveller, newly arrived in Osh, it was both bewildering and exhilarating. 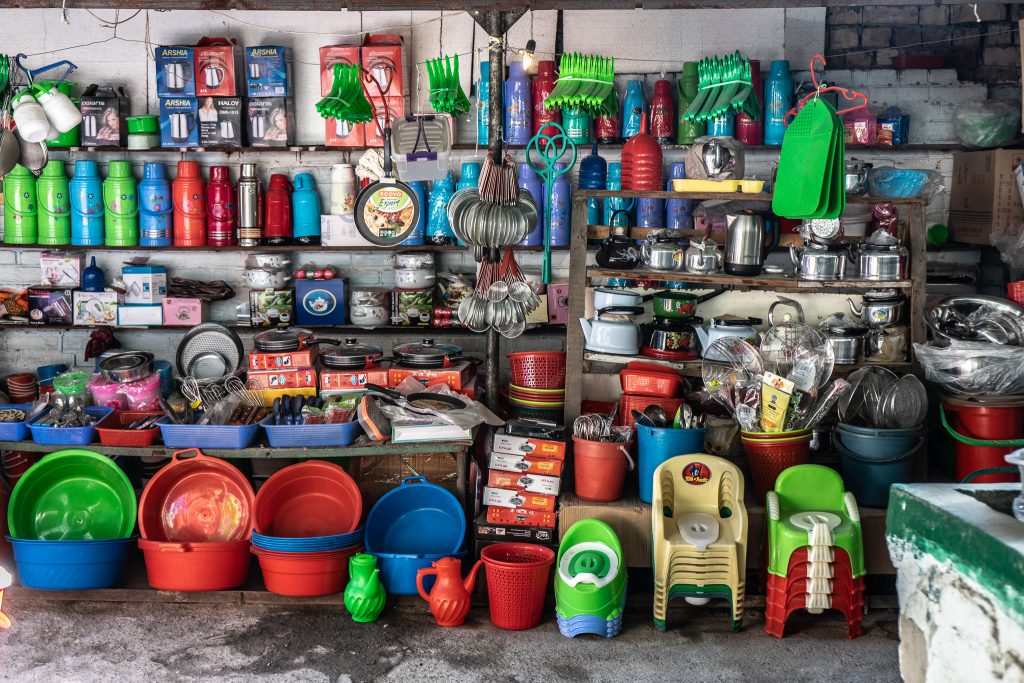 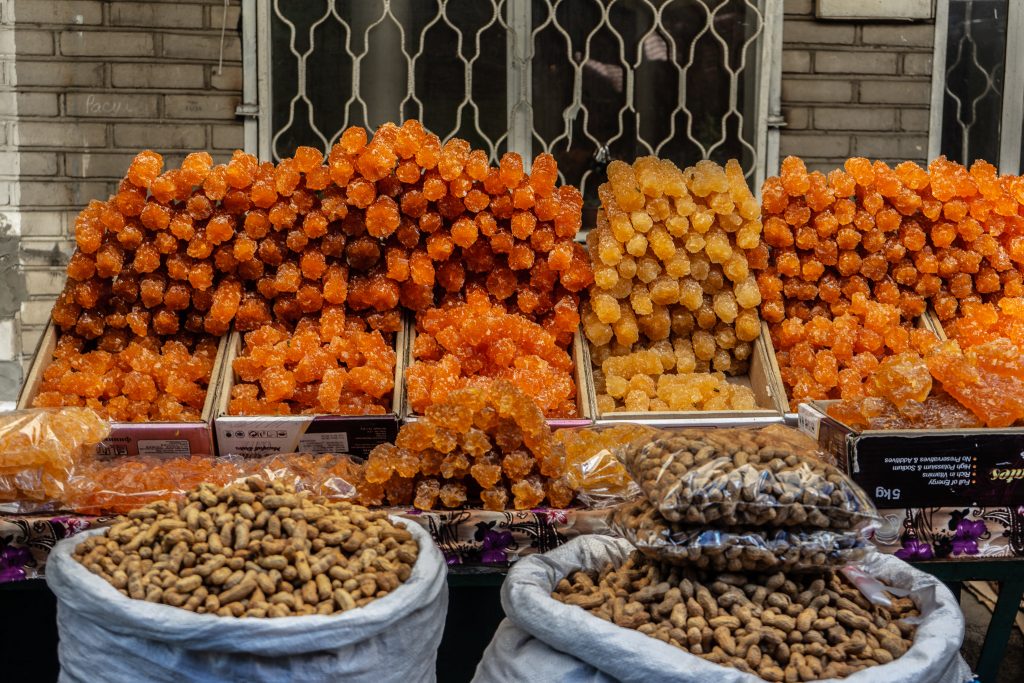 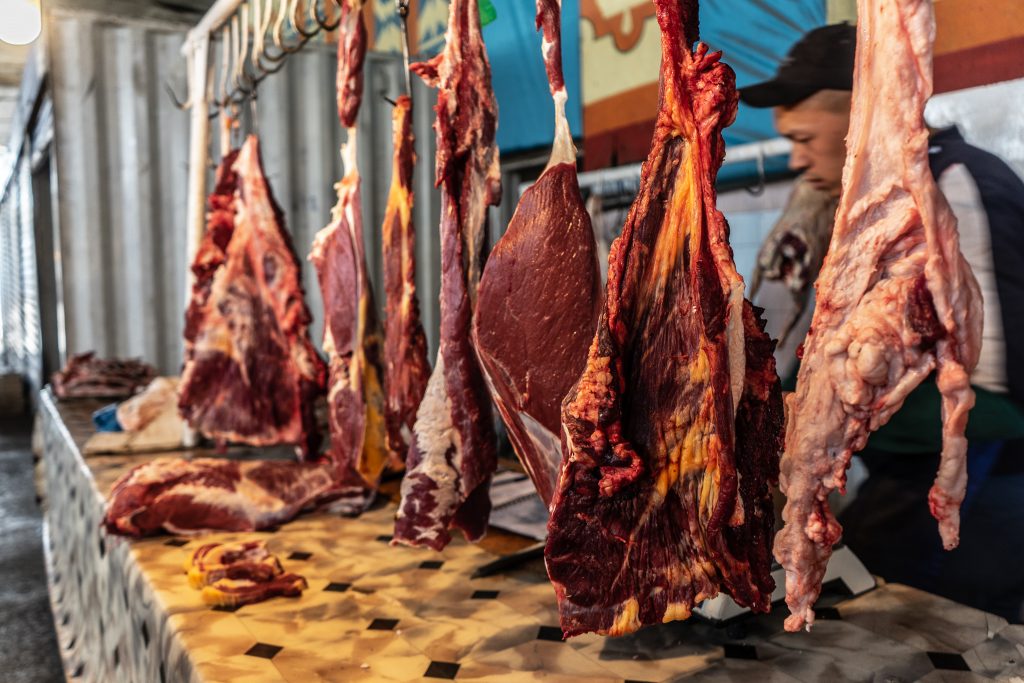 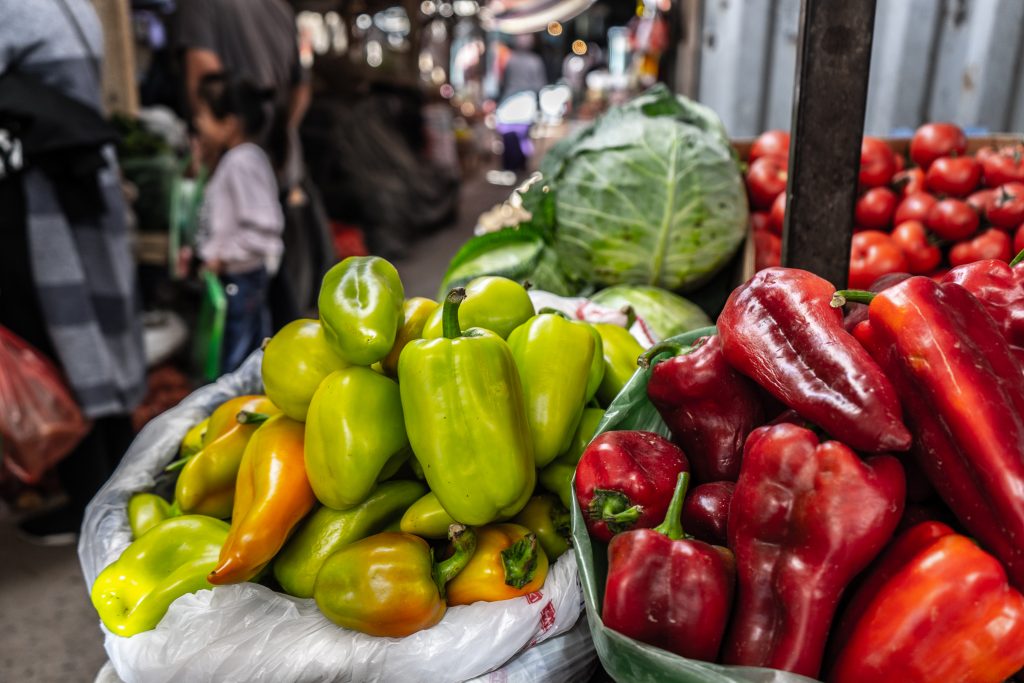 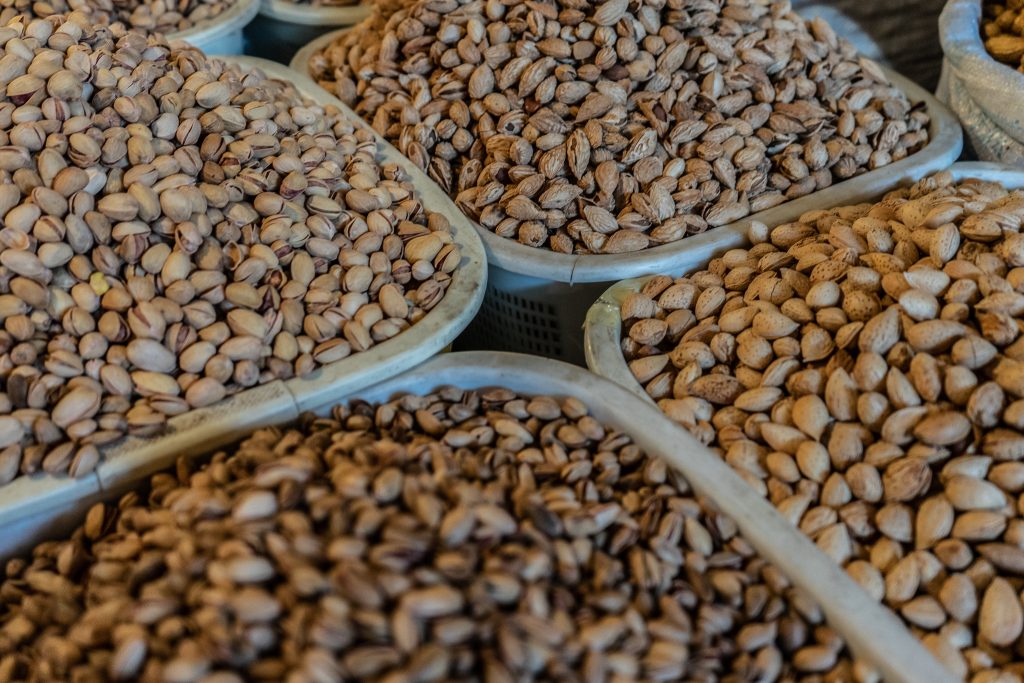 The Modern Silk Road in Kyrgyzstan

This was the modern Silk Road in action in Kyrgyzstan. Alongside the locally produced fruits and vegetables, I saw containers full of imported, Chinese labelled goods from across the Tien Shan Mountains to the east.

Butchers cut up meat on raised tables with rustic hatchets, hanging it to dry in the open air while eery goat heads were laid out for sale along display counters. I saw television screens, sim cards, iPhones and every conceivable modern comfort for sale, while entire sections were dedicated to the sale of traditional rugs and clothing that wouldn’t have been out of place centuries ago.

Despite the bustle and the flourishing business opportunities though, the bazaar also holds signs of the struggles that Osh faces within Kyrgyzstan. Some parts of the market are still scarred by riots that shook the city as recently as 2010. A few sections of roofing or walls are blackened and burnt, a legacy of the violence that overtook Osh when tensions between ethnic Kyrgyz and Uzbeks erupted in the wake of a countrywide revolution and left at the very least hundreds dead and thousands of homes and businesses destroyed.

I soon became lost amongst the stalls and buzz of the market, surrounded and immersed in the tradition, the noise and the business of this modern yet ancient Silk Road, as I explored the Jayma Bazaar in Osh. 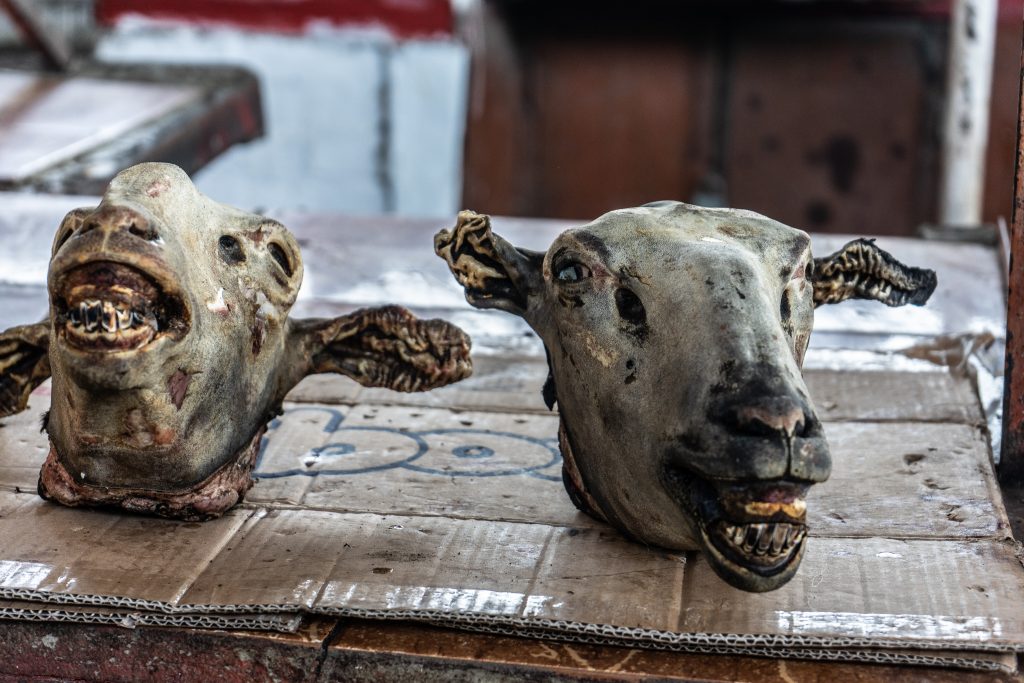 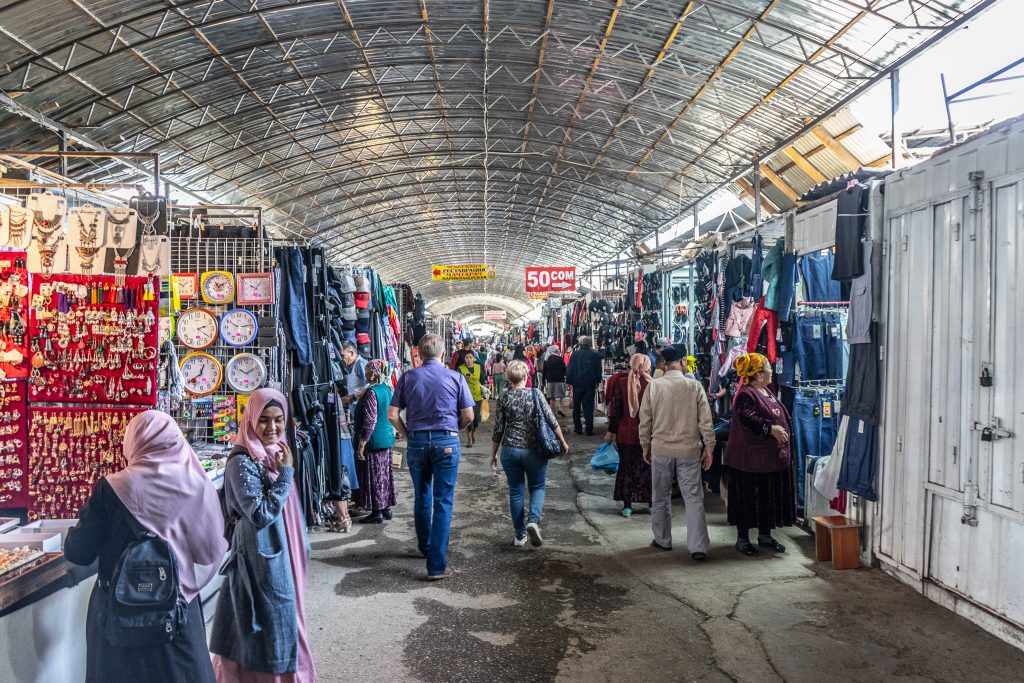 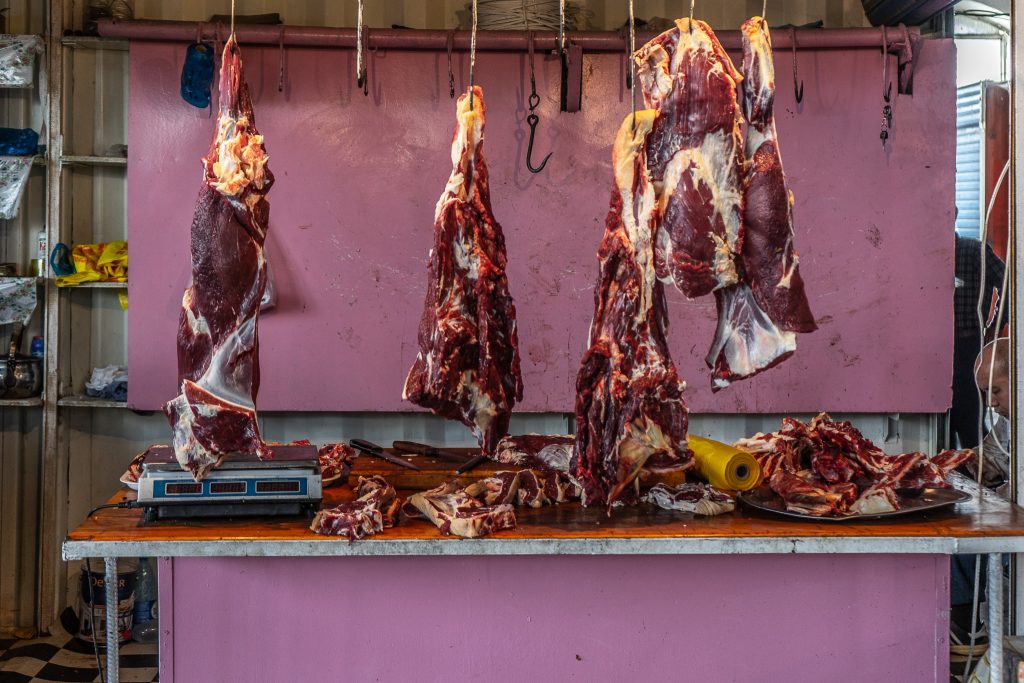 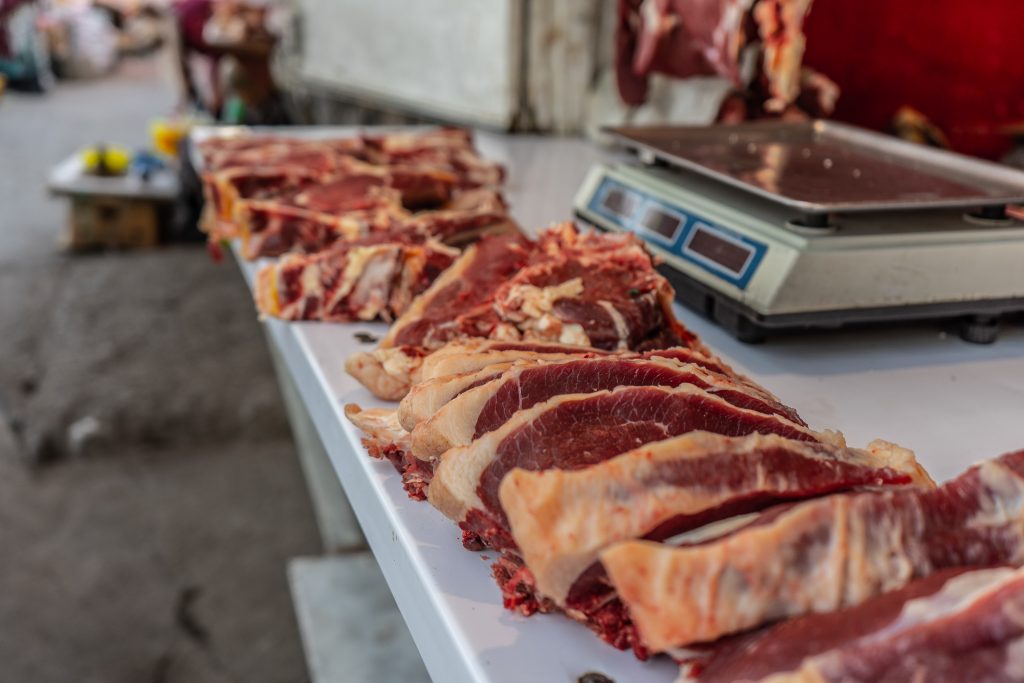 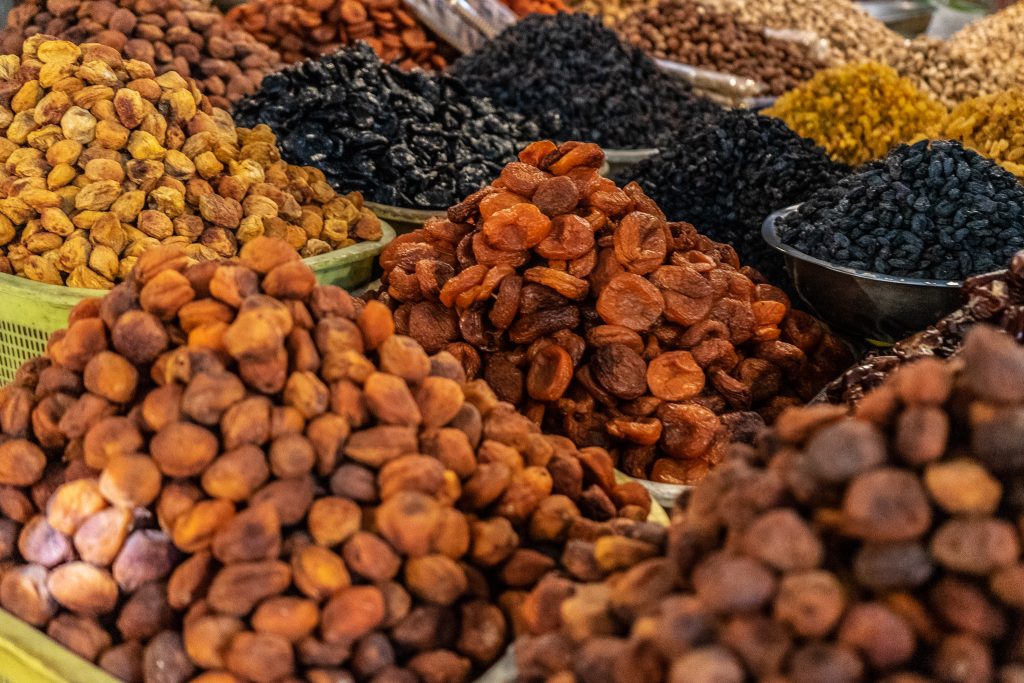 Travelling to Osh? Sign up for Air BnB to book your accommodation using this link HERE and you’ll get £25 free credit towards your first booking!