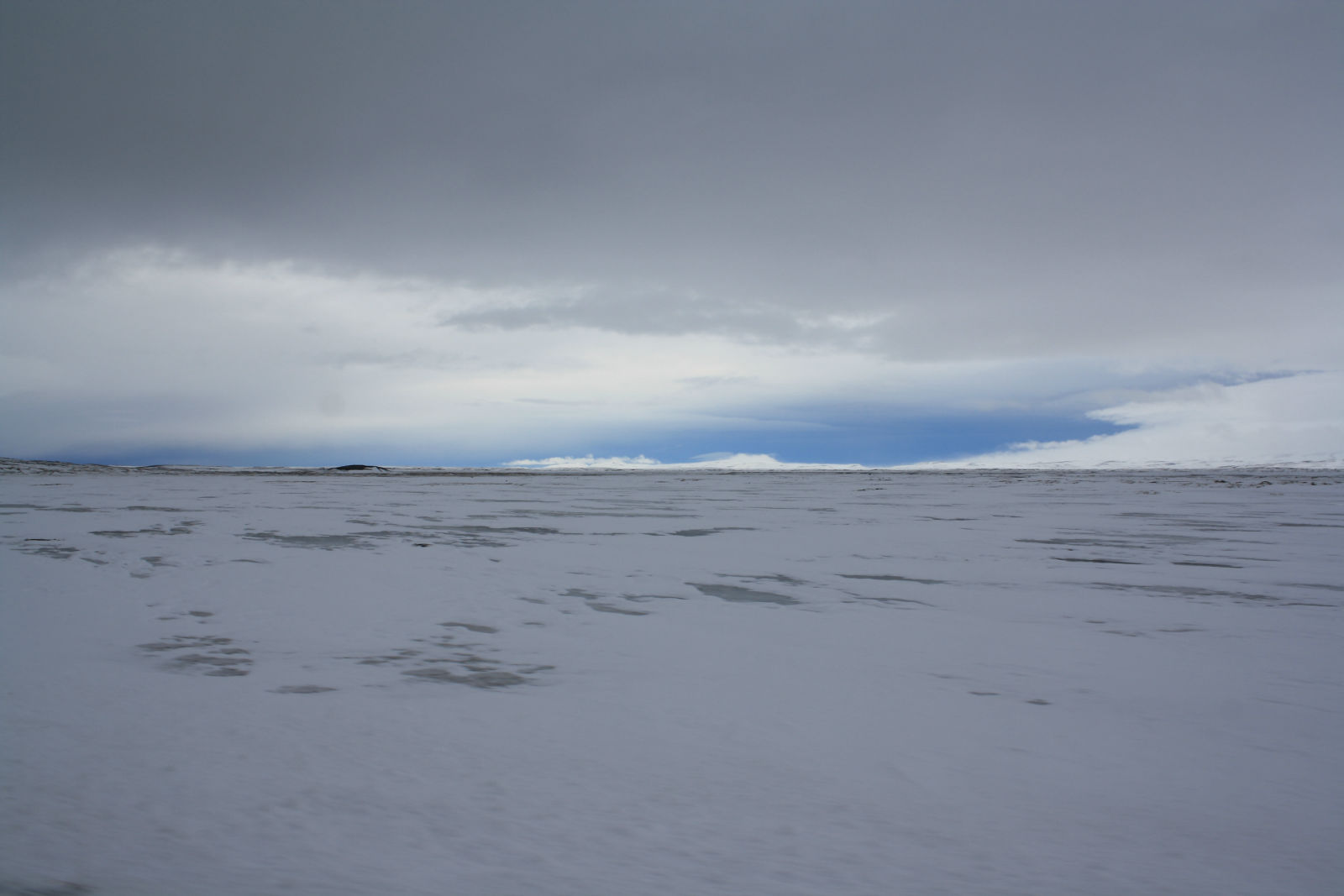 It was a day as cold as any as I strolled out onto the porch of the guesthouse.

Vatnajökull- the largest glacier in Europe- imposed its vast frozen presence on the horizon, as a grey mist began to engulf everything in the distance in a hazy, ominous screen. Pulling my hat over my ears I clambered into the nominal warmth of the car. It was time to drive. 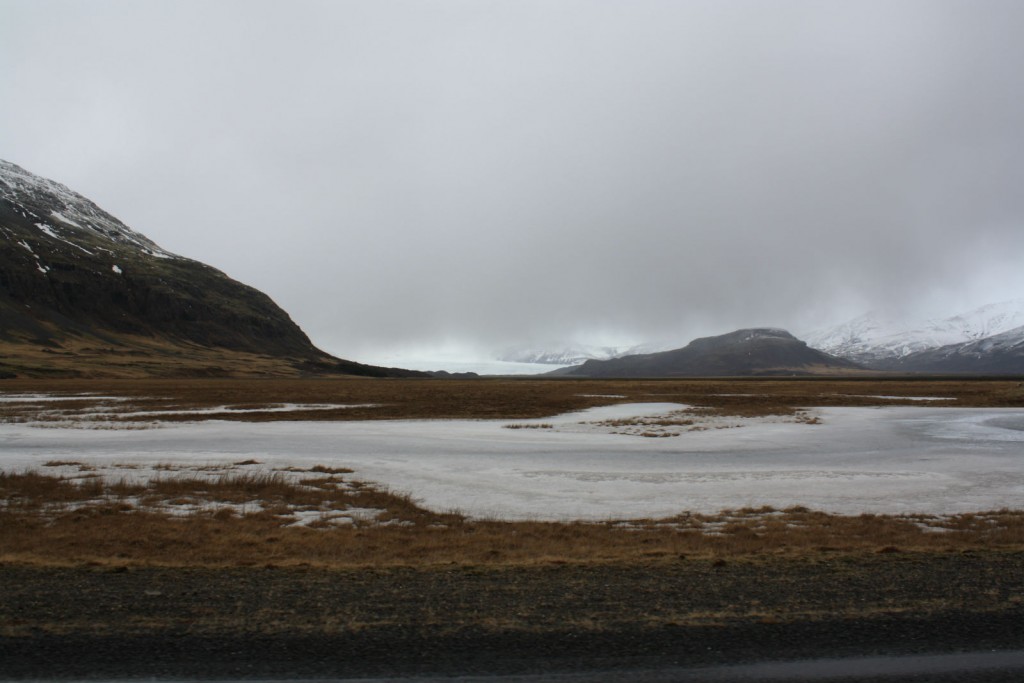 I was in Hofn– the lobster capital of Iceland- and was heading north. My rough planning on google maps led me to believe that from here to Lake Myvatn– the next stop on my road trip- was a journey of around 5 hours. And back in England, everyone knows that a 30 minute walk on google maps is in reality only ever 15 minutes at any normal pace. Setting out in the car I was confident, even with the grey clouds rolling in around us, that in only a few hours I’d be enjoying the pleasures of a lakeside stroll. 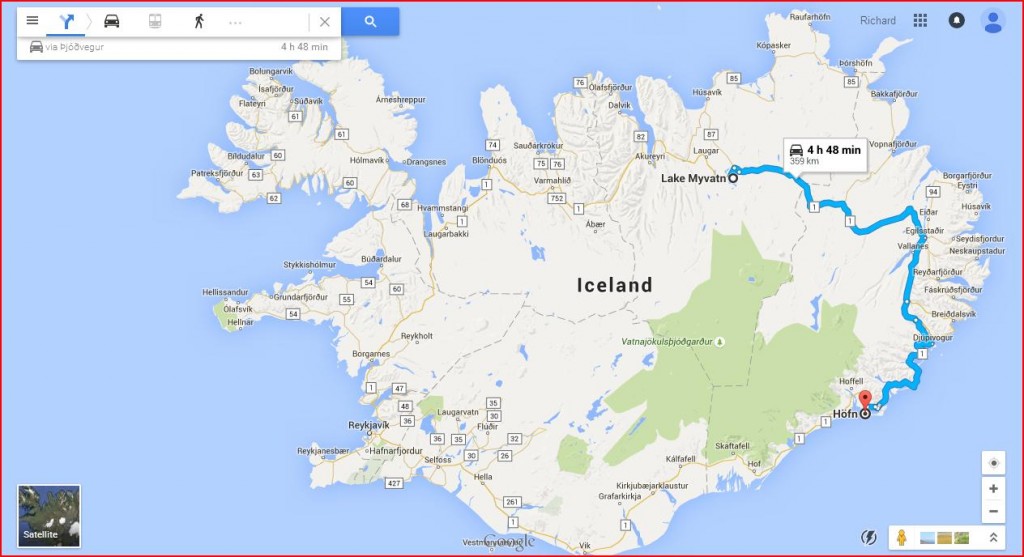 Driving along the coastal road, the glacier remained indomitably behind us as black sand beaches rolled past on one side and mountains rose on the other. Even as the scenery flew past in these early kilometres the grey drizzle was always following the car, unshakably clinging on to all around it. 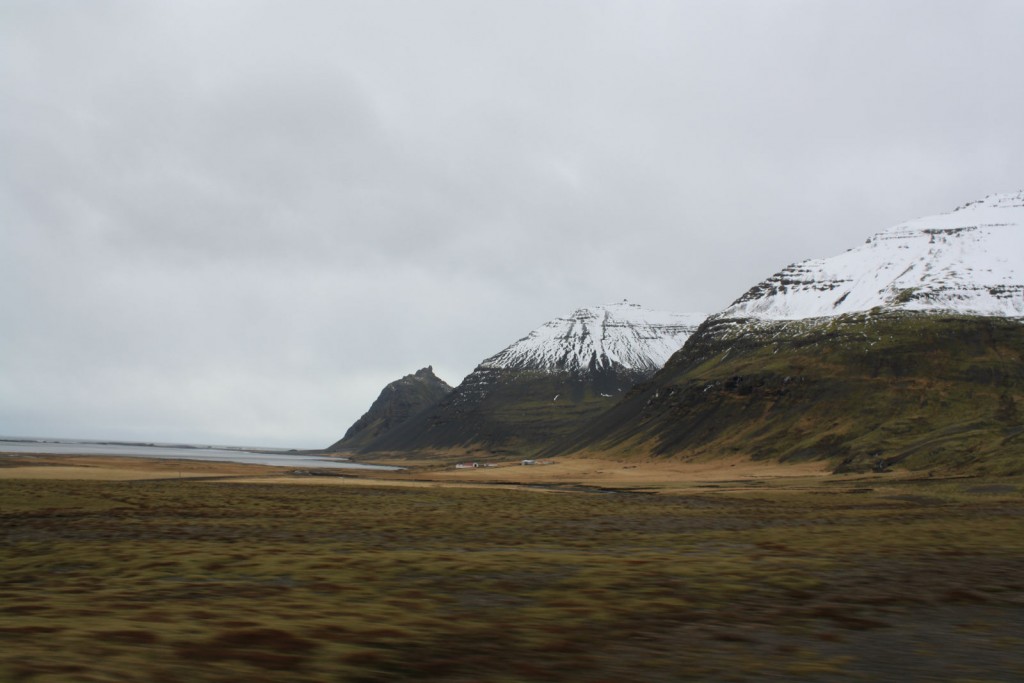 It soon became clear that I had foolishly underestimated the unpredictability of Icelandic weather. The plan was to follow Route 1- a distance of around 350 kilometres. But this plan relied heavily on the route being open. Presuming that the country’s main road would indeed be driveable proved to be the first mistake. 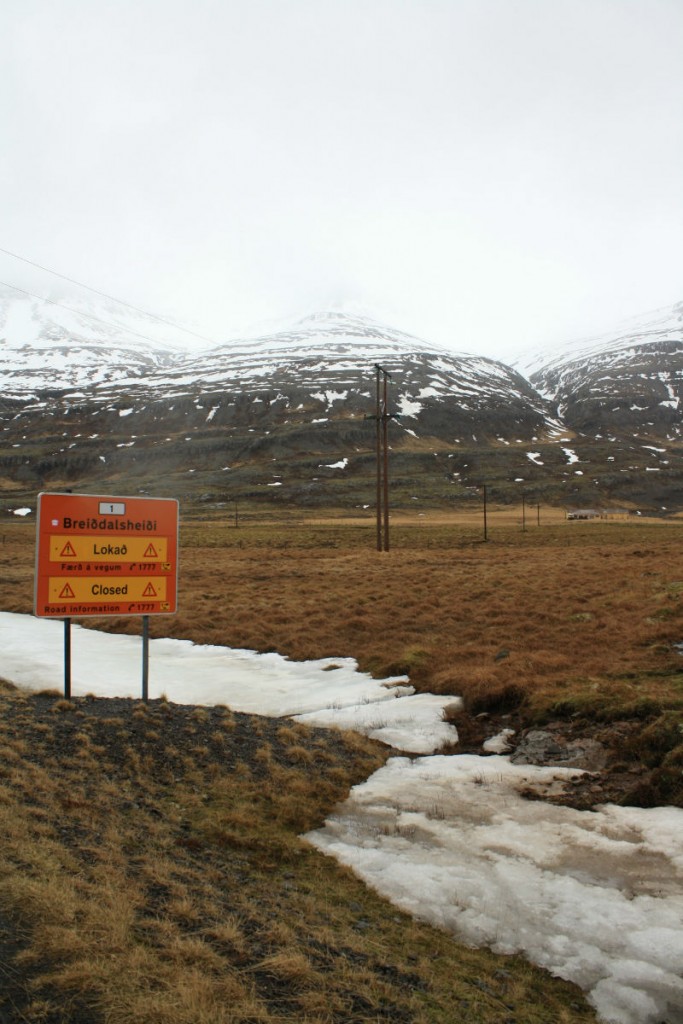 And yet, an hour into the journey, a road closed sign appeared ahead of the car as Route 1 began to head into the mountains. All of us in the car debated whether Iceland’s primary road would in fact really be closed and we almost began to continue along it, thinking that surely it couldn’t be- surely it was passable, especially in a 4 X 4. Seeing our indecision a young Icelander pulled his truck over and told us  that we definitely should go around. It was impassable and if we got stuck, help was unlikely to arrive. The sign clearly mean what it said then. 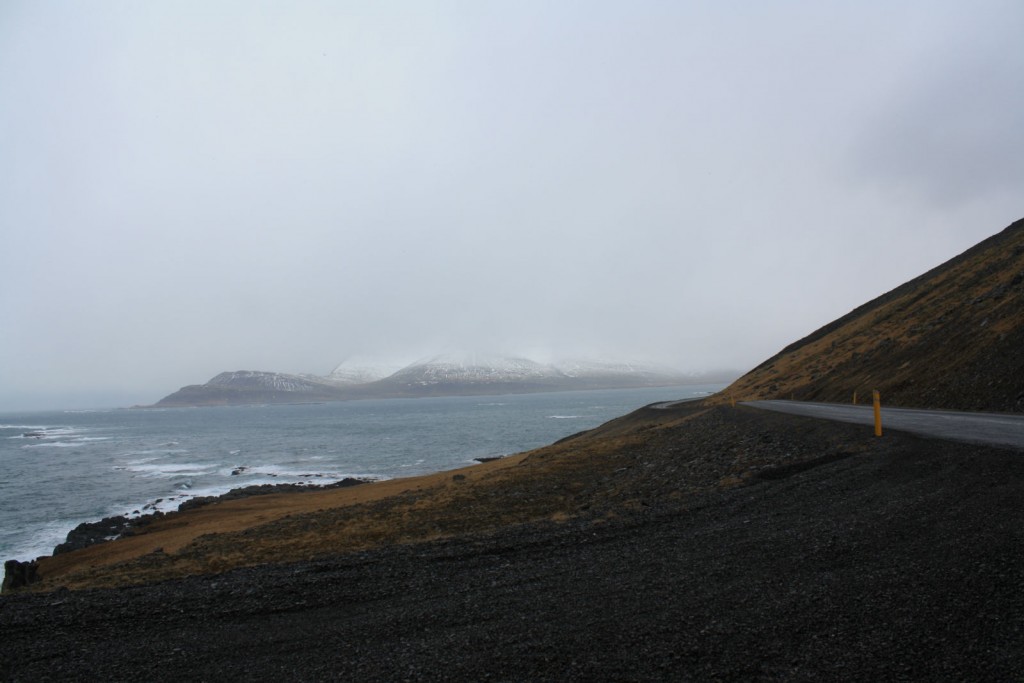 With our plan slowly unraveling beneath the weight of Icelandic snow and ice, the Icelander directed us to take the scenic route. It was time for a detour for the East Fjords. The coastal road was open for business. 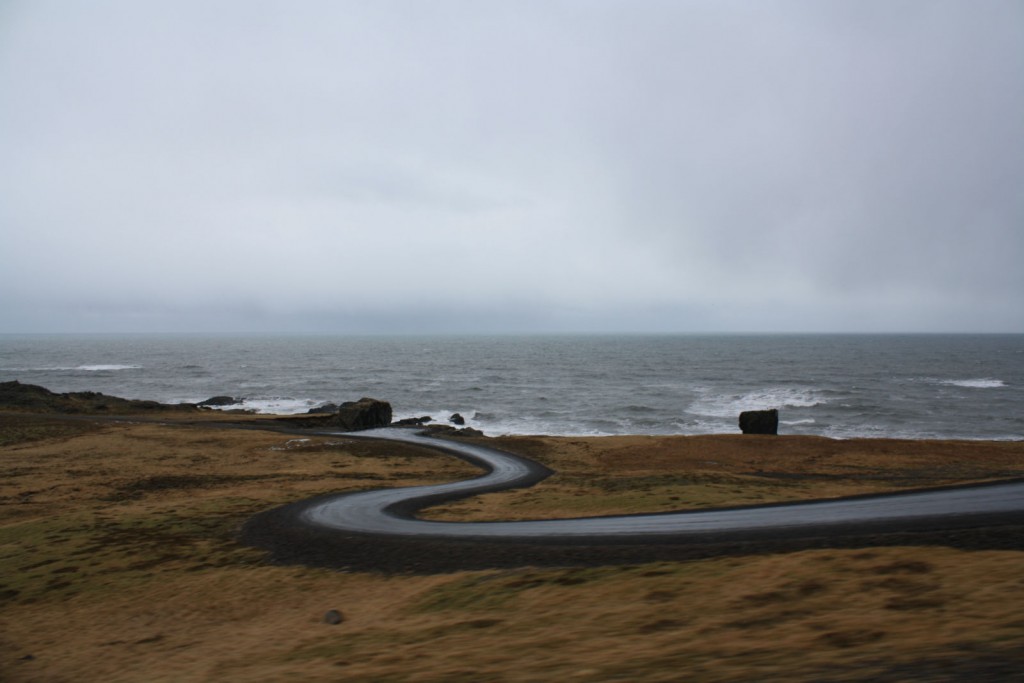 The road wound its way around the East Fjords, the Atlantic Ocean battering itself against the rocks as reindeer roamed the fields. The detour was scenic, but hours later we were still driving along the coast, getting further and further North when we should have been heading East, or at the very least North East. 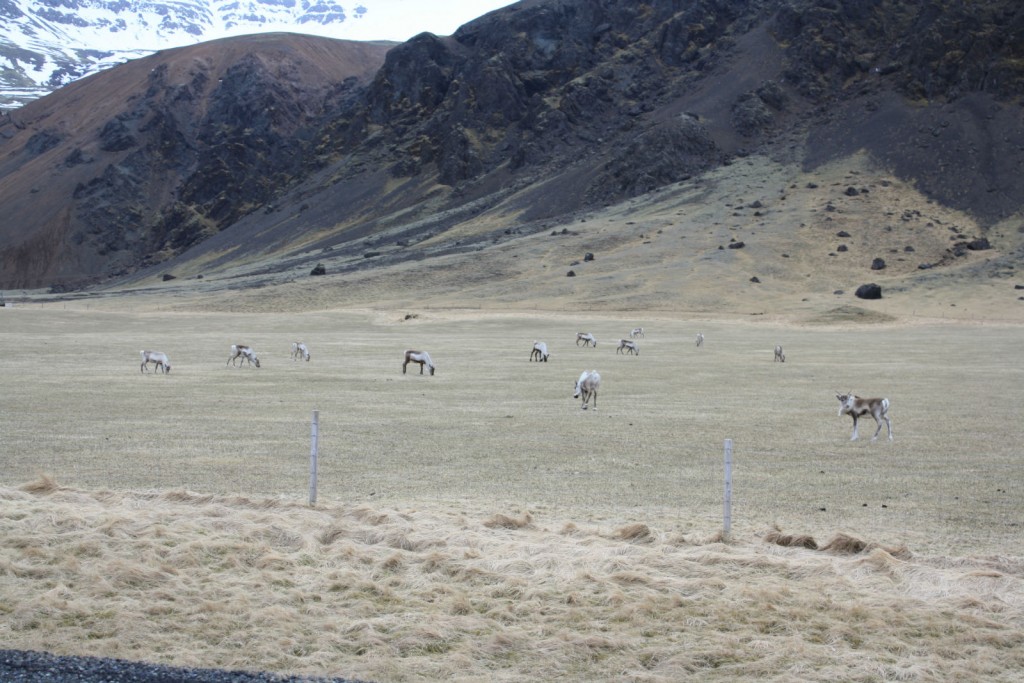 Eventually we began to head inland and finally met up with Route 1 again. We were hours behind schedule already and running low on Icelandic hot dogs too by this point. And we were now gaining altitude- driving into the highlands- and the weather was beginning to descend into dark madness. 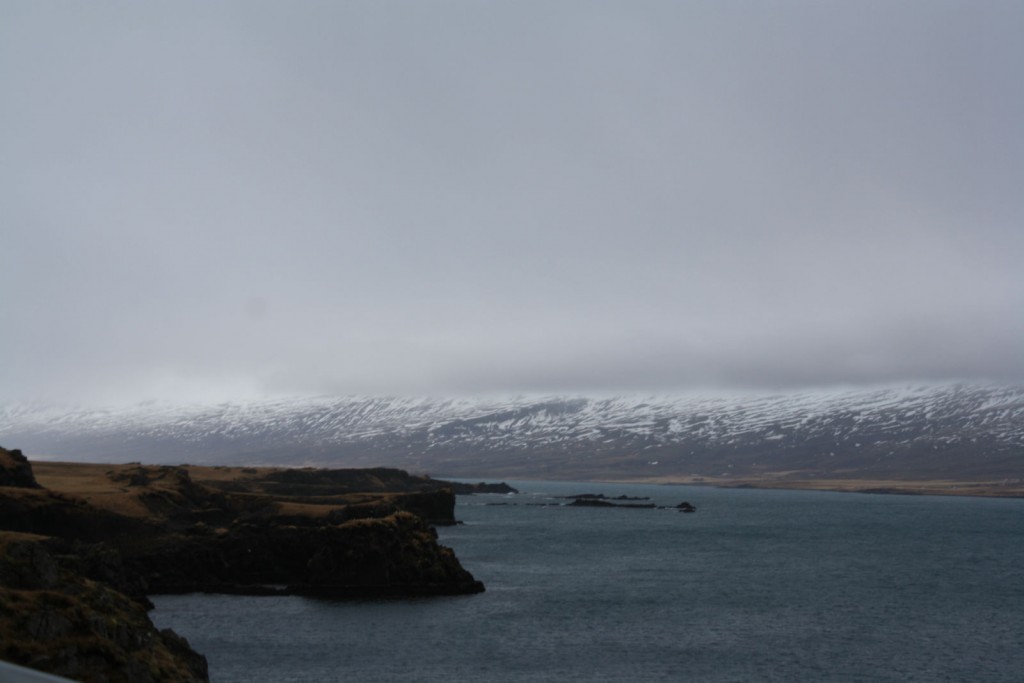 Icelandic weather is a shock when you’re first exposed to the magnitude of its severity. Along the coastal road things had been drizzly and grey, but out of nowhere the grey turned into an impenetrable white barrier. 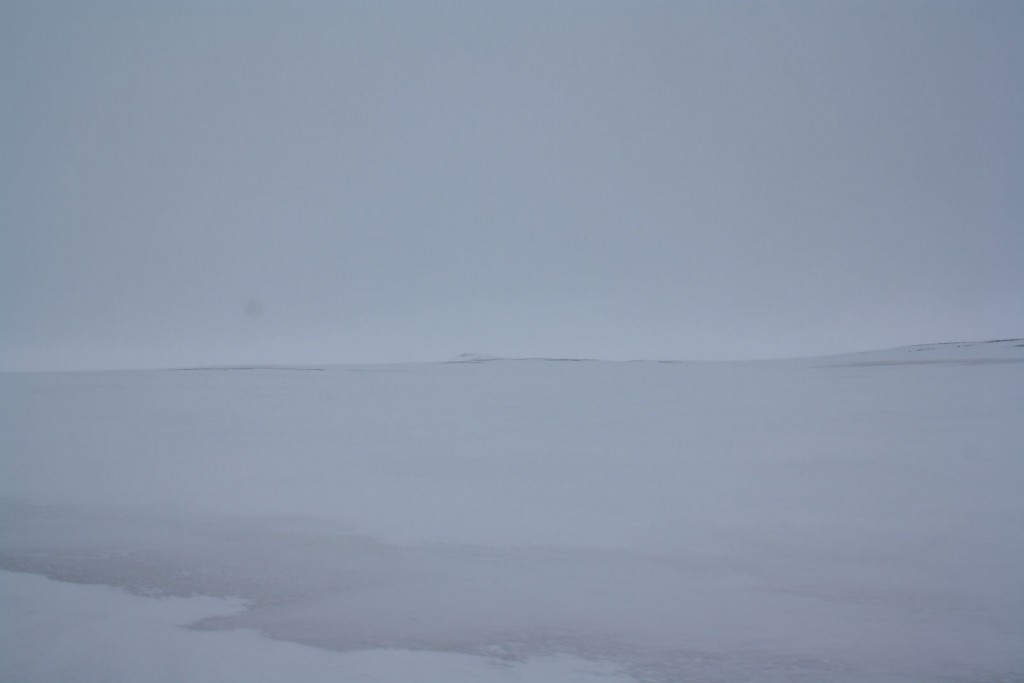 And it didn’t end. 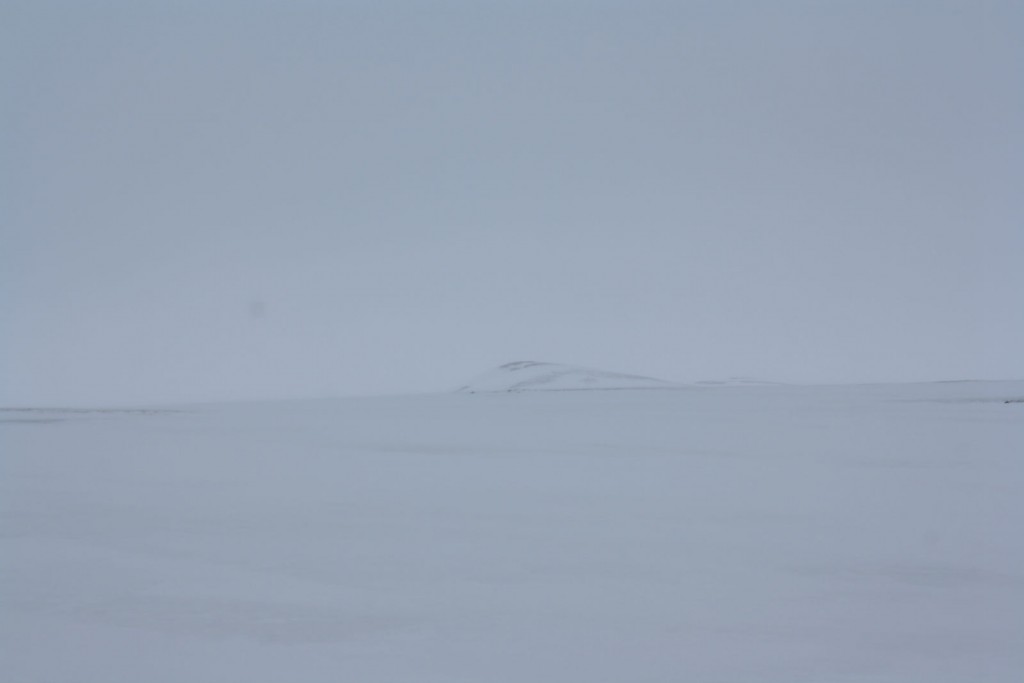 The road was invisible, just part of the endless, endless white surrounding us. The car crawled to a halt. We slowly drove along not knowing what was ahead or behind us. And every now and then a truck would come hurling along past us, the headlights appearing out of nowhere and disappearing just as quickly. 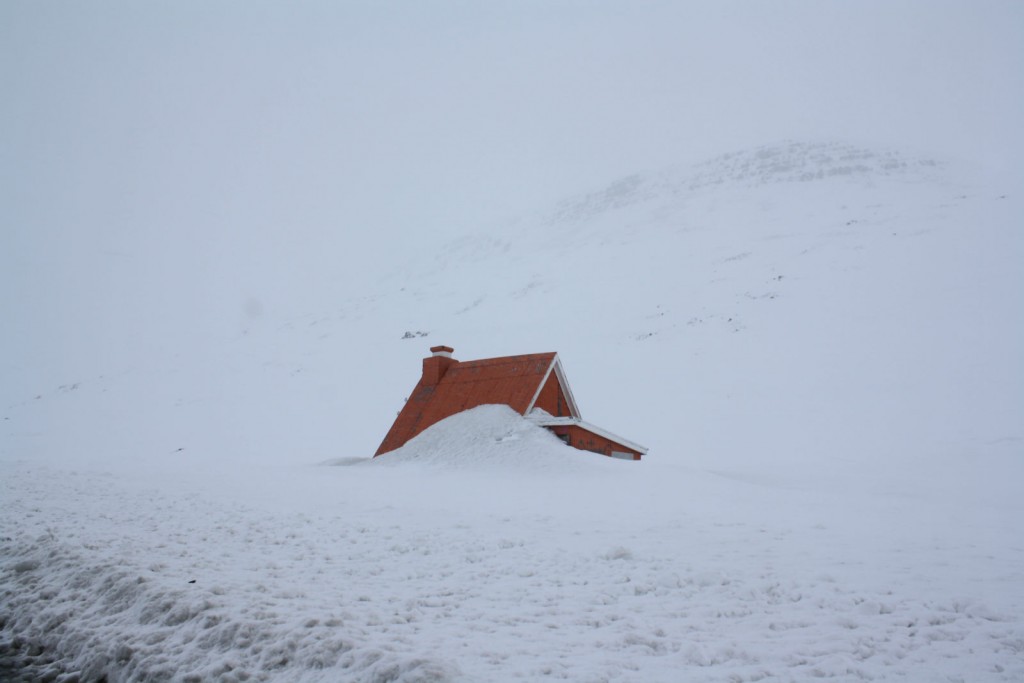 For almost an hour the visibility was zero. And when the haze lifted, we were surrounded by snow and ice. Even the waterfalls were frozen solid. 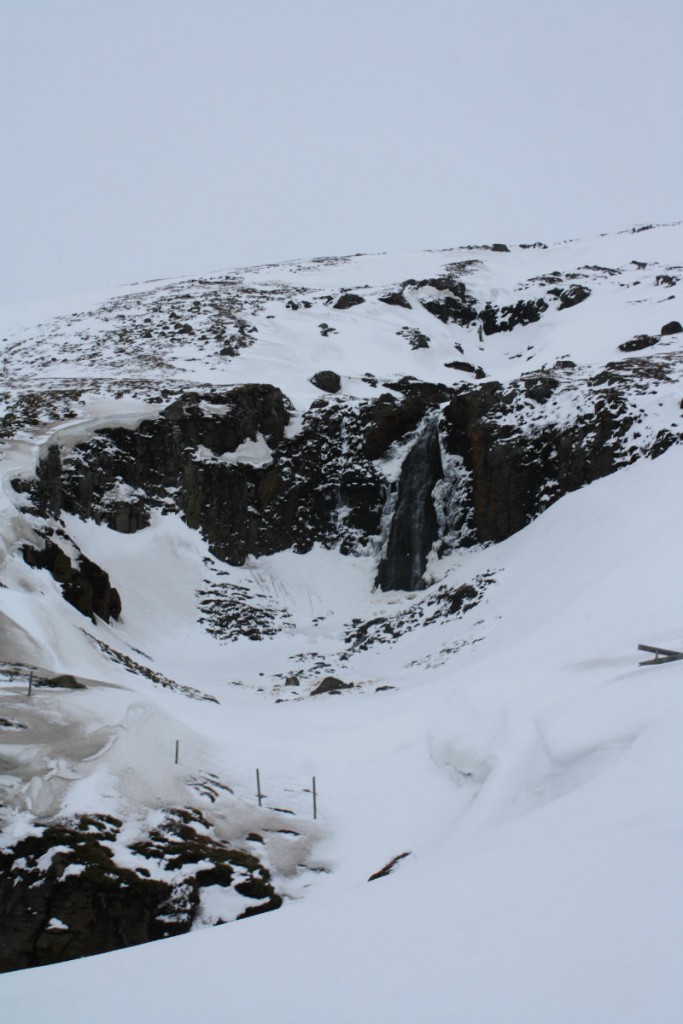 The drive was treacherous. But there was no turning back now. We passed sheer ice covered cliff drops, as we passed through the mountains, all hope of reaching Myvatn in a few hours long left behind at the road closed sign. 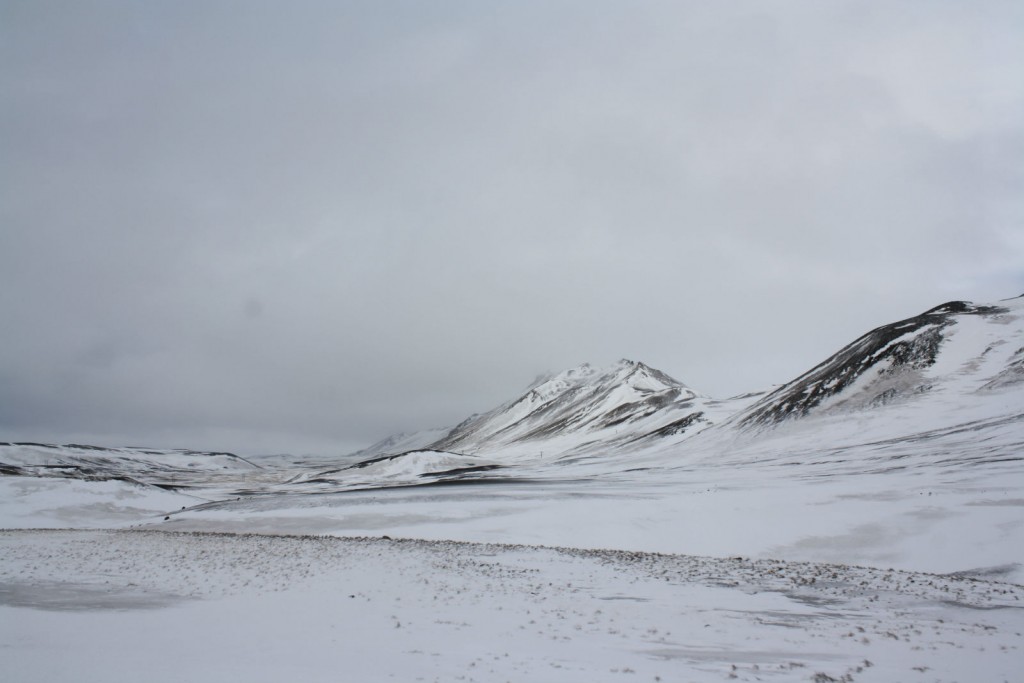 It was a desolate frozen landscape. One that seemed to consume everything. And yet it was dauntingly spectacular to witness. 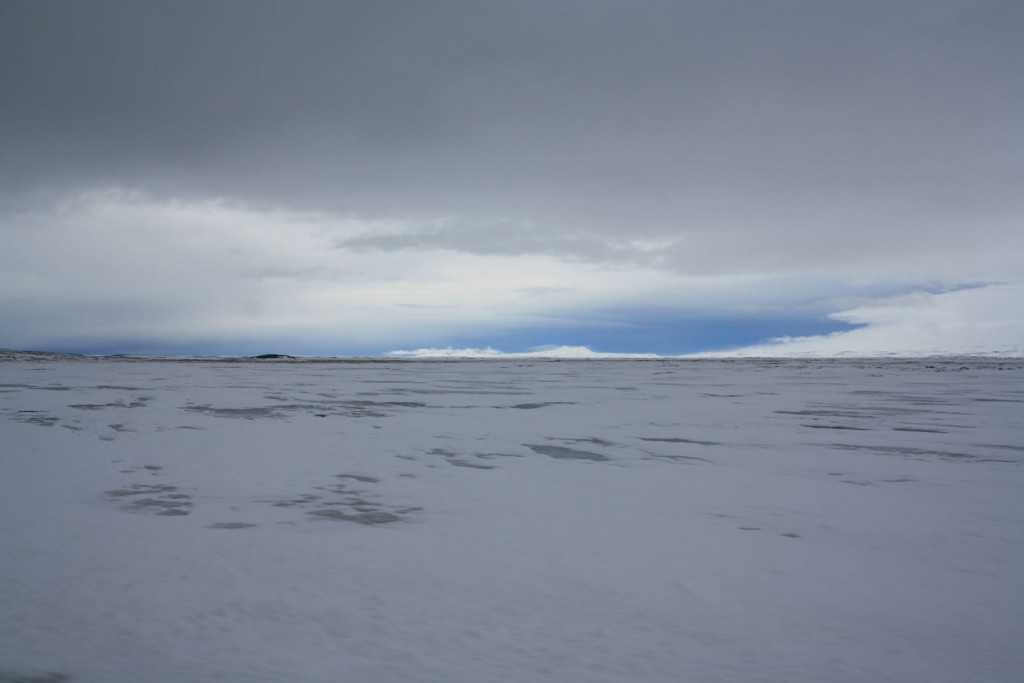 As suddenly as it had all begun, we dropped out of the mountains the weather began to clear again. Or as clear as it gets in Iceland that is. At least we could see the road ahead of the car. 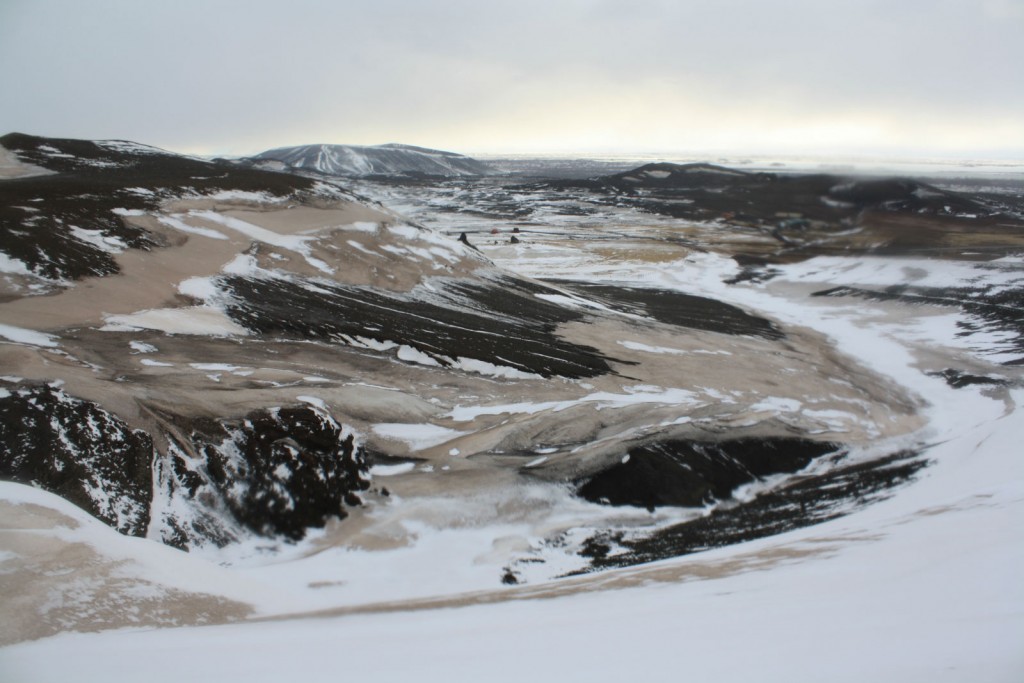 We’d been on the road for almost 10 hours by now, but ahead of us Lake Myvatn finally appeared over the mountains. Google maps had been hideously wrong and the snow had almost claimed us all. 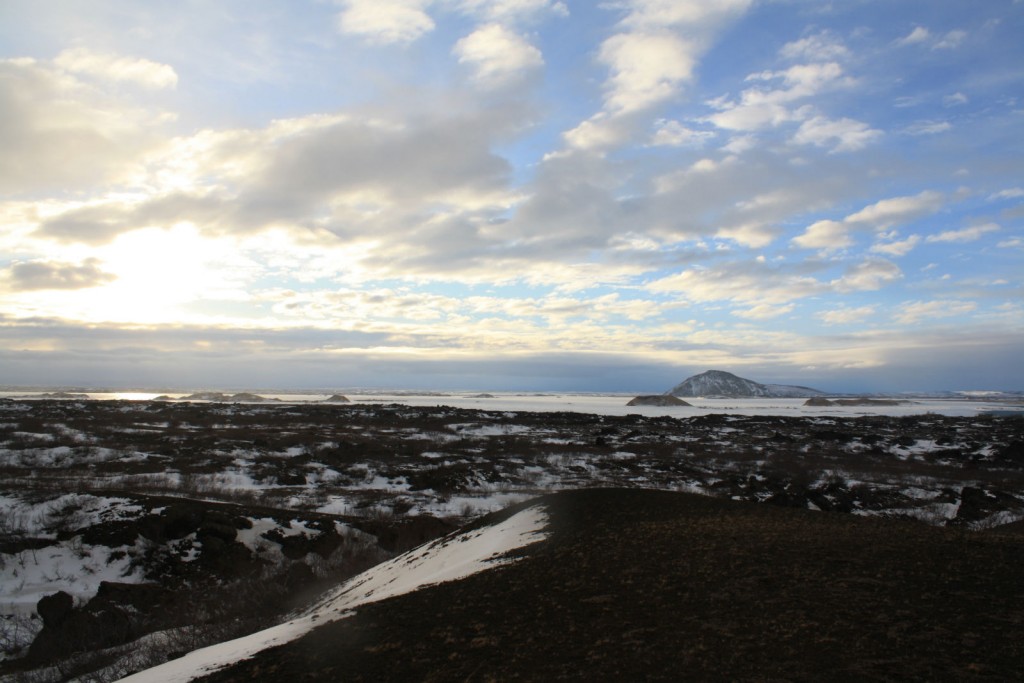 There was only one thing left to do, and that was to grab a beer and warm up in the thermal baths. 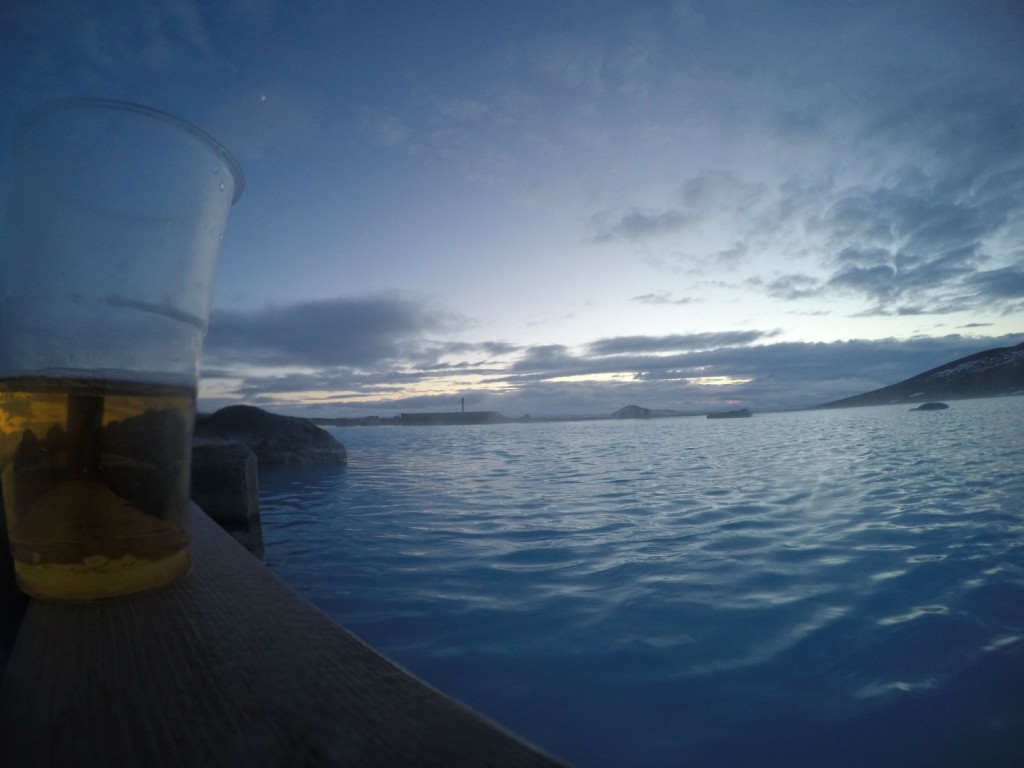 Want to be prepared for your Icelandic Road Trip? Get all the tips you need from Travel Tramp’s Survival Guide! I’ve made the mistakes so you don’t get yourself killed.