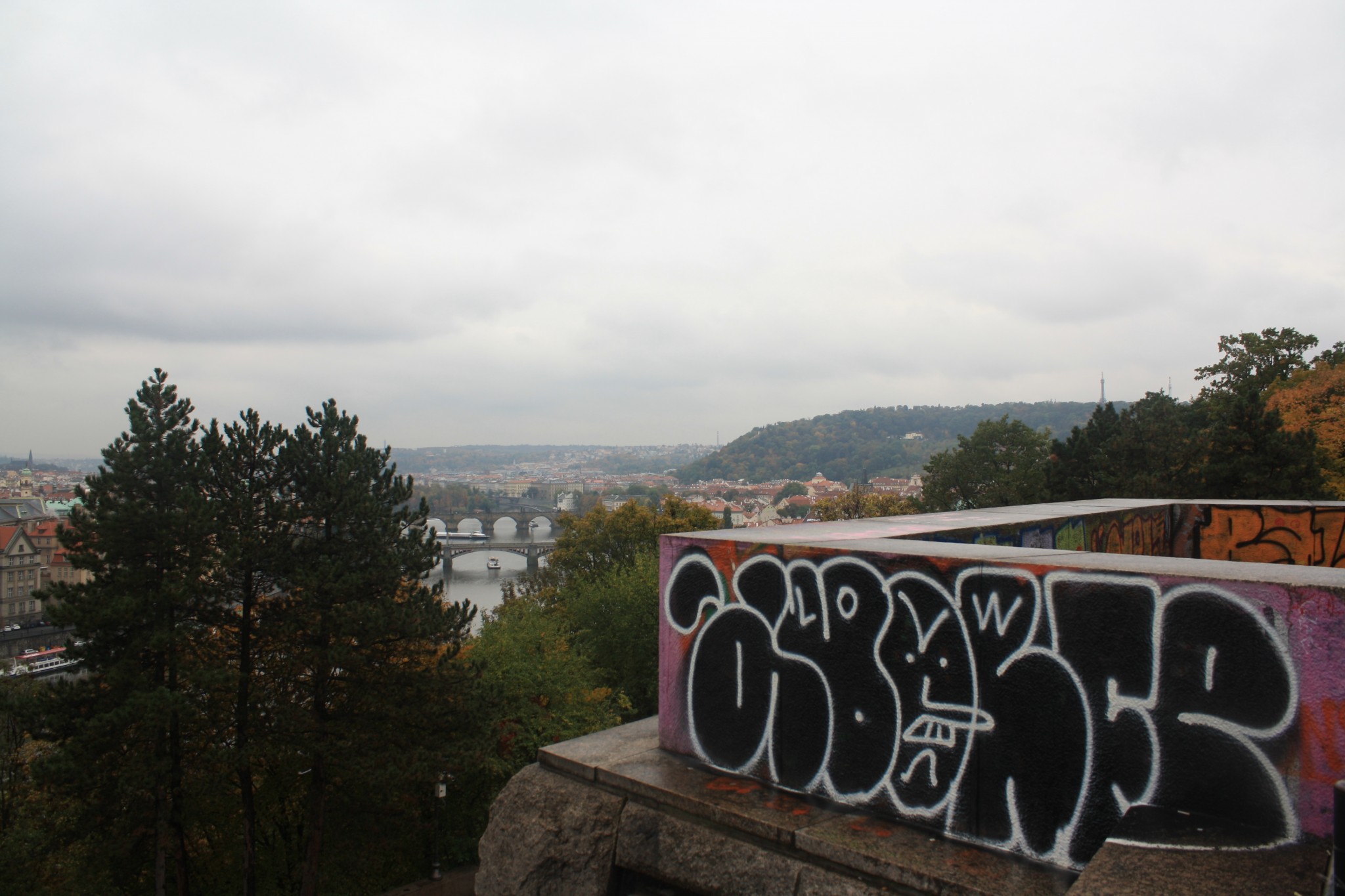 Beneath the city of Prague lies a network of underground tunnels built by the Communist Regime of Czechoslovakia in the 1950’s. I went deep below ground to explore this Soviet legacy and to find the bunkers built to survive all out nuclear war between world powers. 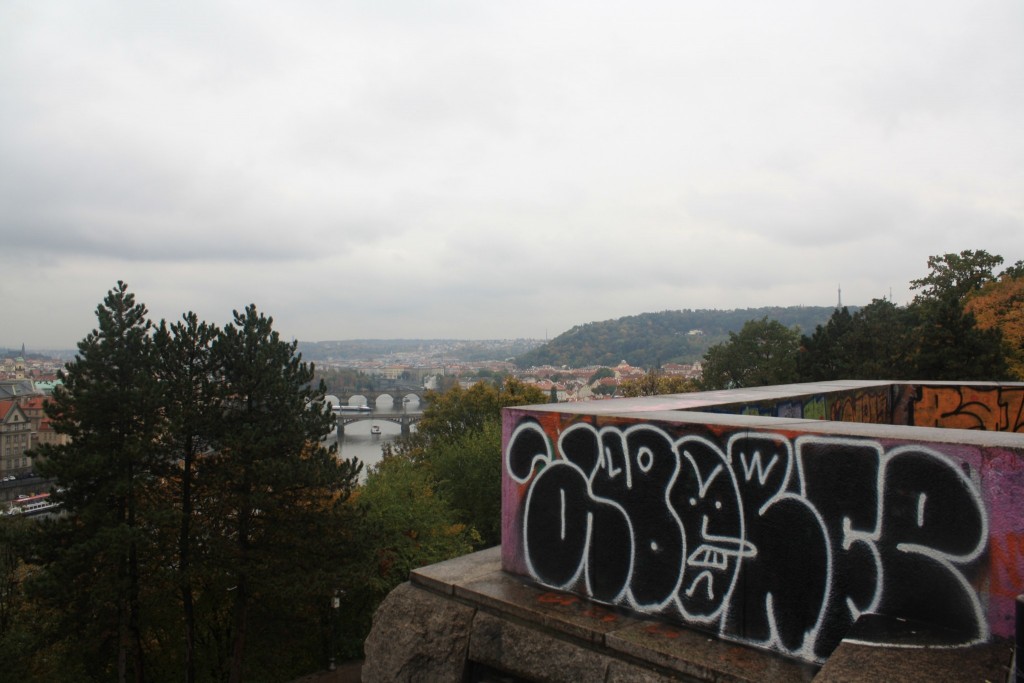 I was in Prague, capital of the relatively young nation of Czech republic, but a city with a long history and a rather more recent relationship with communism. i was here to explore the turbulent times of socialism and to trace the lasting memorials of the defining events of the last century through the city’s streets. 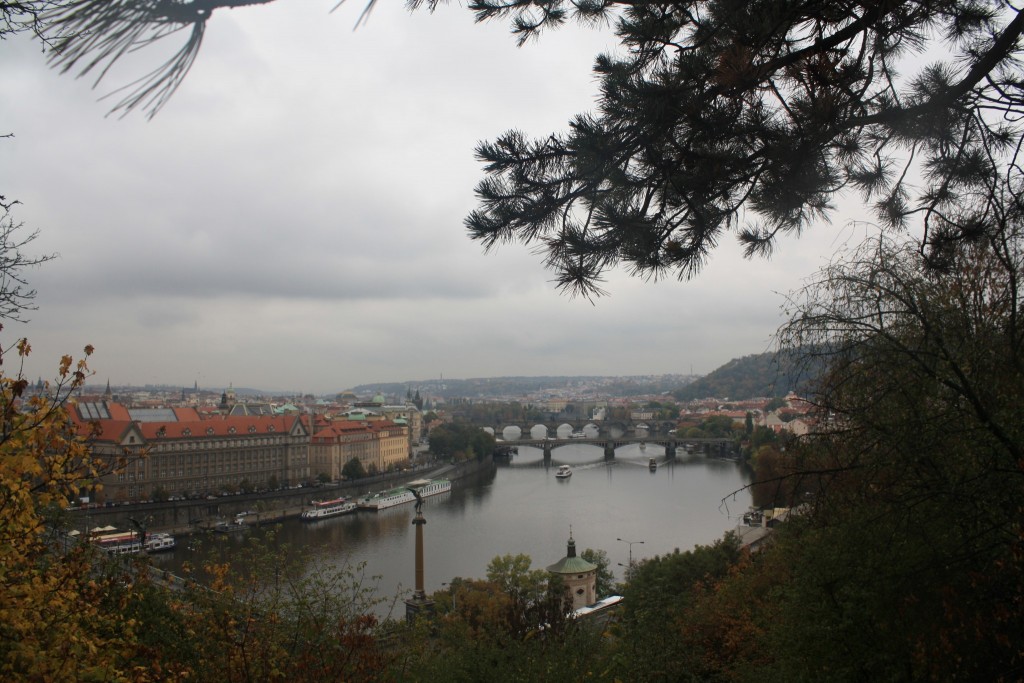 Standing in the grey drizzle near Prague’s Old Town Square, Michal- my guide- began his city’s story just after World War II. Czechoslovakia, which had been ruthlessly occupied by the Nazis, was ruthlessly carved up by the Allies into the soviet sphere of influence and its future would lay behind the Iron Curtain. Initially, the people voted the communist party into power- something many would later come to regret- and from then on the communists simply took everything they could and wrested all possible power to the party.

Walking through the streets, we passed a nonchalant looking building, coloured a fading shade of red. This was the old secret police headquarters. A visit here would usually mean a subsequent visit to the nearby prison. Now, the building was used by the government’s tax inspectors. ‘Same shit, different name!’ someone in the group joked. The political prison was now a luxury hotel, something which was not readily advertised to the paying guests. 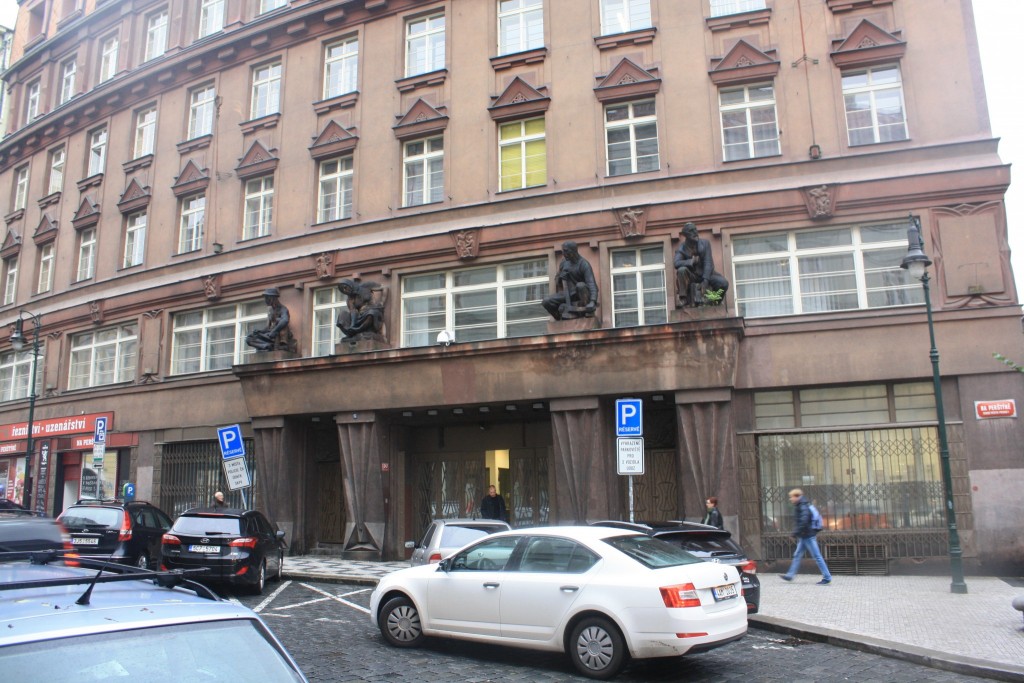 Testament to the communist need to control everything, and the necessity to their power of these institutions, Michal told us how his own family’s opportunities had suffered under the government. His Mother had wanted to be a teacher, however her Father had been classed as an undesirable- he had not voted communist, nor had much interest in the party- consequently all 5 of her attempts to enrol in University were simply denied because of this. The government would never let anyone with any connection to an undesirable advance in society, let alone teach and influence young children. 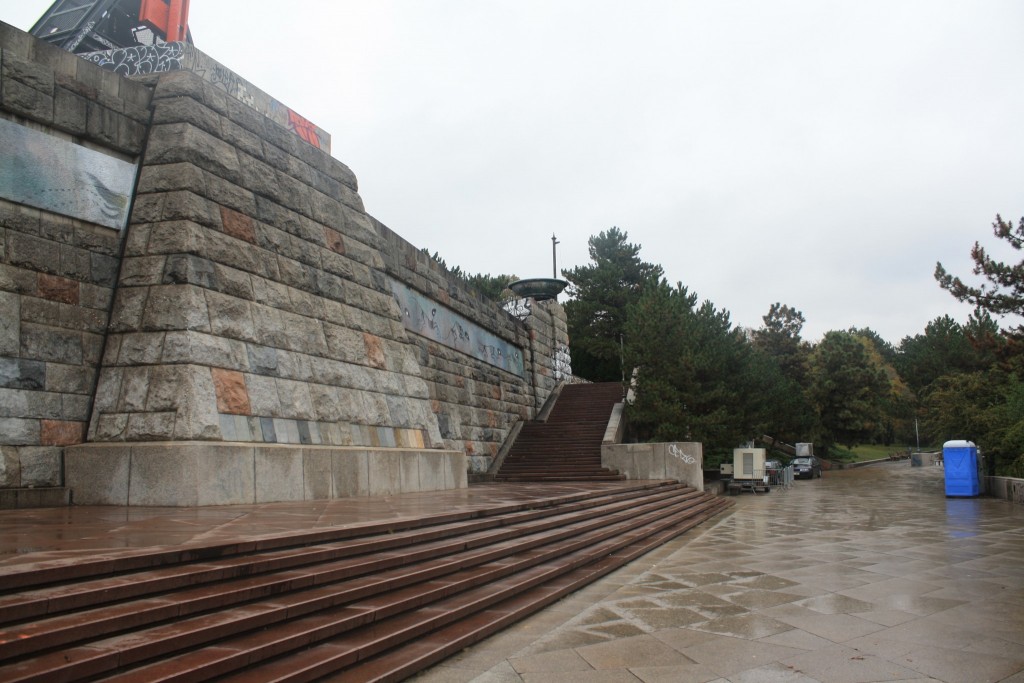 In the 1950’s Moscow suggested that the Czechs should show their support for Stalin. And in another display of communist power and control, the government ordered the construction of the world’s largest monument to the dictator, who in 1953 had passed away. This stood in Letna Park, and would have been visible from across the city such was its size. The architect was under so much pressure that the day before the unveiling he killed himself. 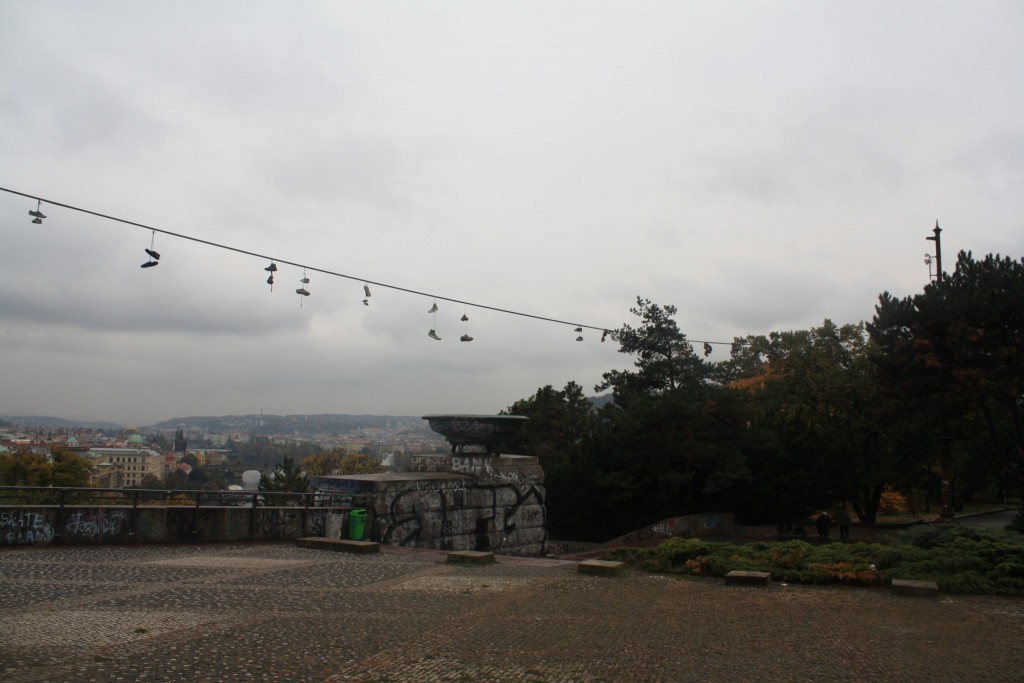 The statue only stood for 7 years. In 1962, Moscow again suggested that the statue should be destroyed. It was no longer doctrine to revere Stalin, as the government now acknowledged his murderous nature. These days there is a giant metronome standing where Stalin once did and there’s a night club under the podium. In the ’90’s there was even a huge statue of Michael Jackson here to advertise his European tour. 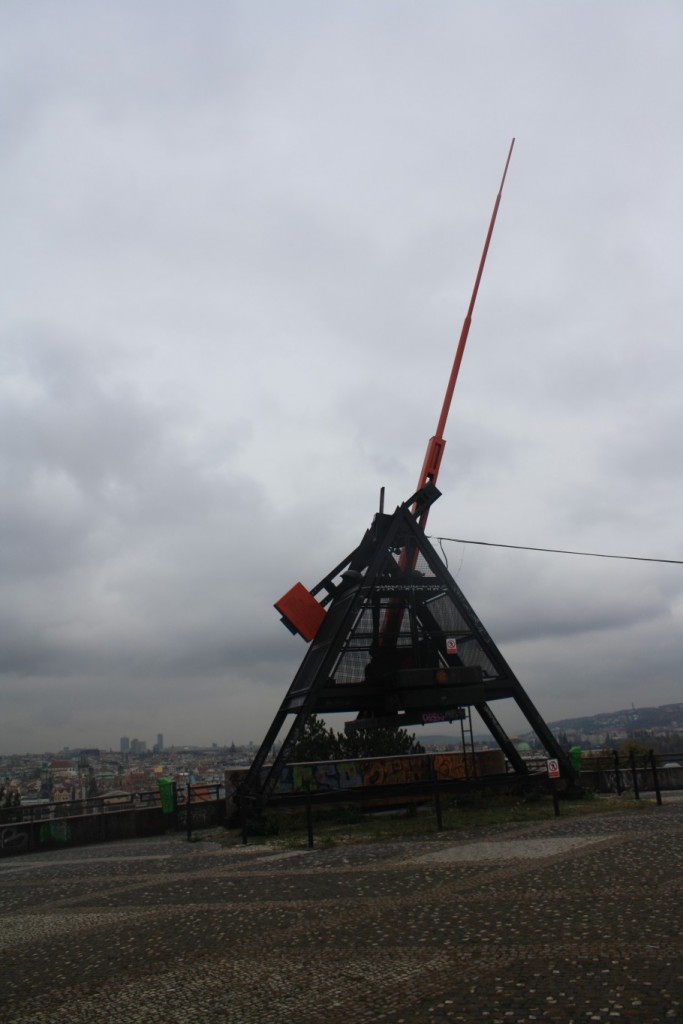 Underground though, the government had constructed a network of bunkers which would last longer than Stalin. In the 1950’s, with nuclear war a very real and terrifying threat, the authorities began building shelters for the population. 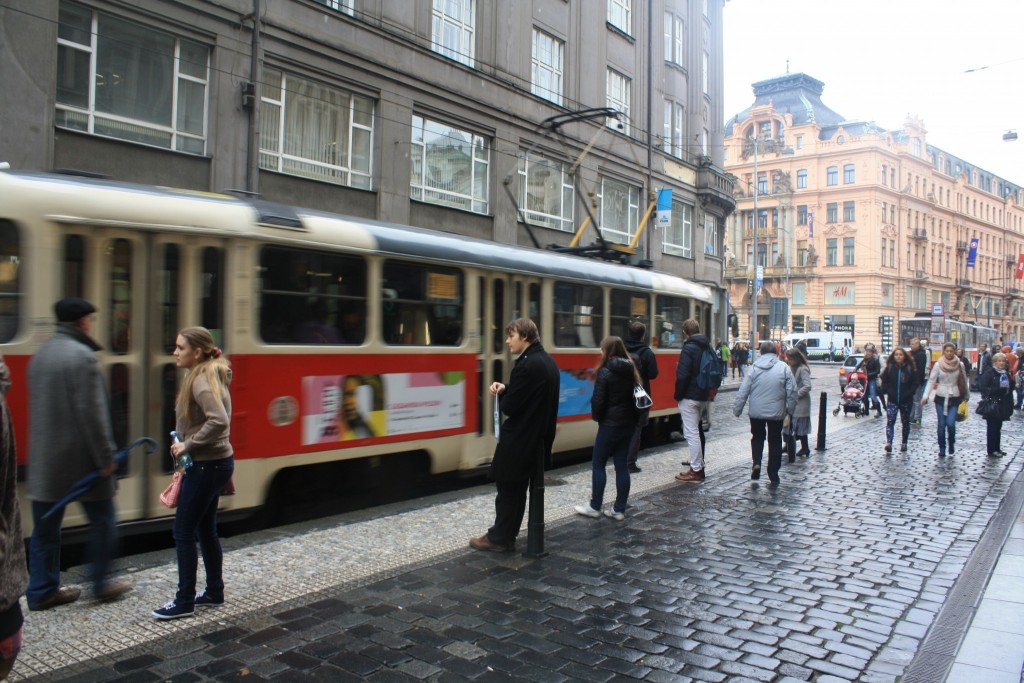 Michal led us by tram outside the city centre and in the greying suburbs of Prague, the mist rolled in as I stepped off, to be surrounded by concrete flats and tower blocks. Rsing above it all was the hugely ugly TV tower. Consistently voted the most horrendous building in the world I was told. 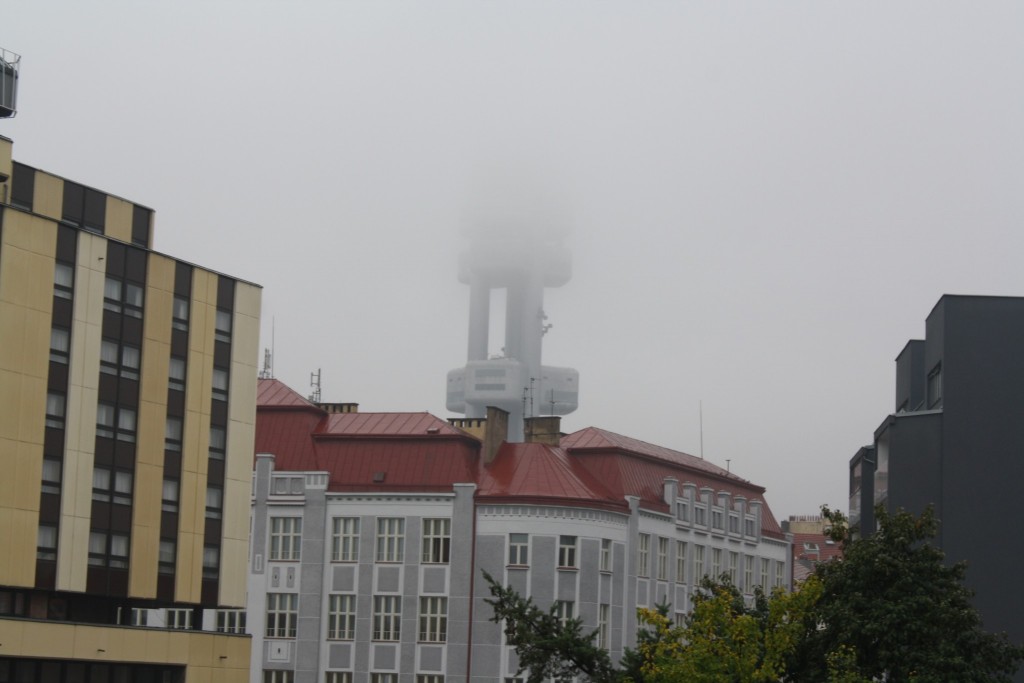 It’s so hideous a Czech artist was even allowed to add giant, naked babies to the outside. I guess they thought it couldn’t really look any worse, although what this was meant to achieve is still beyond me. If you look closely you can see them disturbingly crawling up the sides. 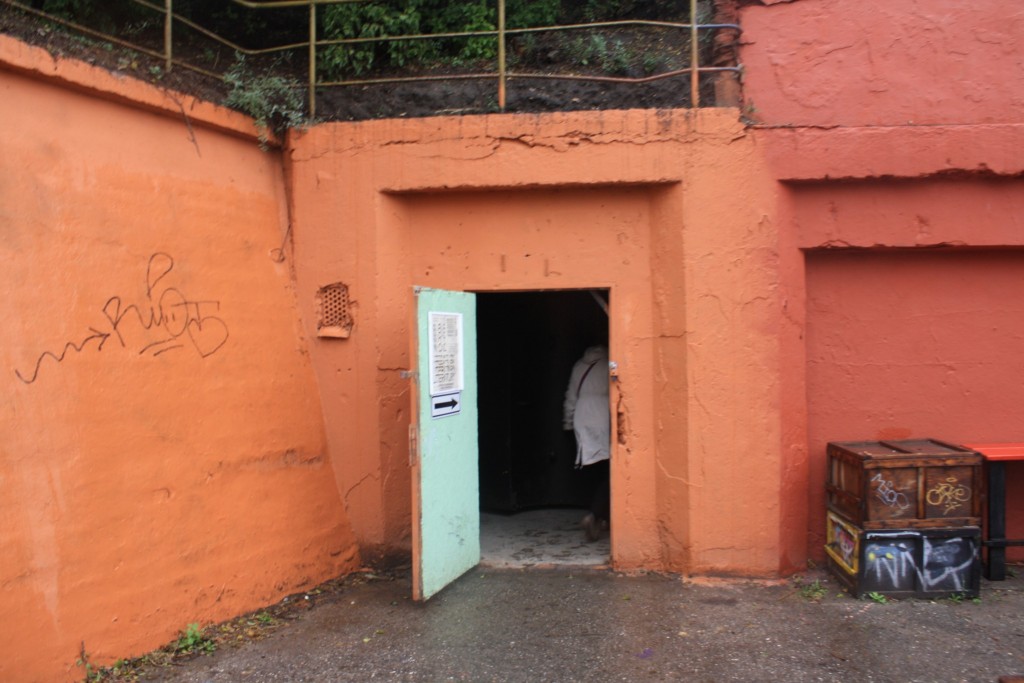 A short walk later and we were outside a bar, closed off for the low season. Michal led us to a small metal door. This was one of the five entrances to the bunker complex. And through the door, the steps went down 16 metres underground. 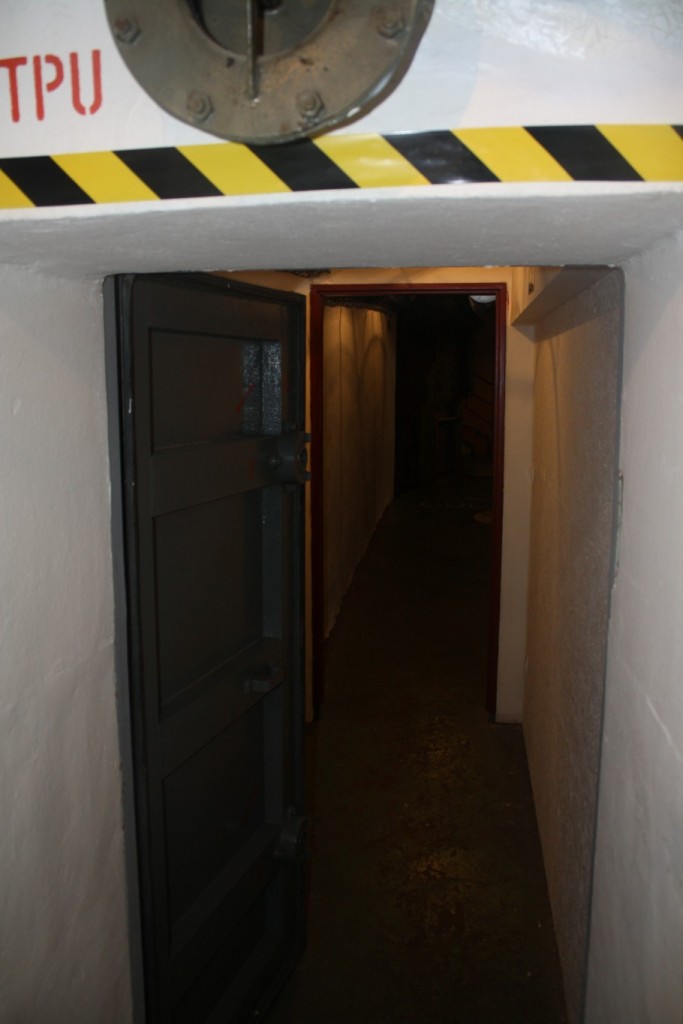 This bunker was built to house 5000 people, but only for one month. Conditions would be dire. There were only 12 toilets for everyone. This works out to be one toilet for every 450 inhabitants. Most of the time would be spent queuing presumably. The original toilets are still in action years later too, if nature calls whilst down below. They really were designed to survive a nuclear war. 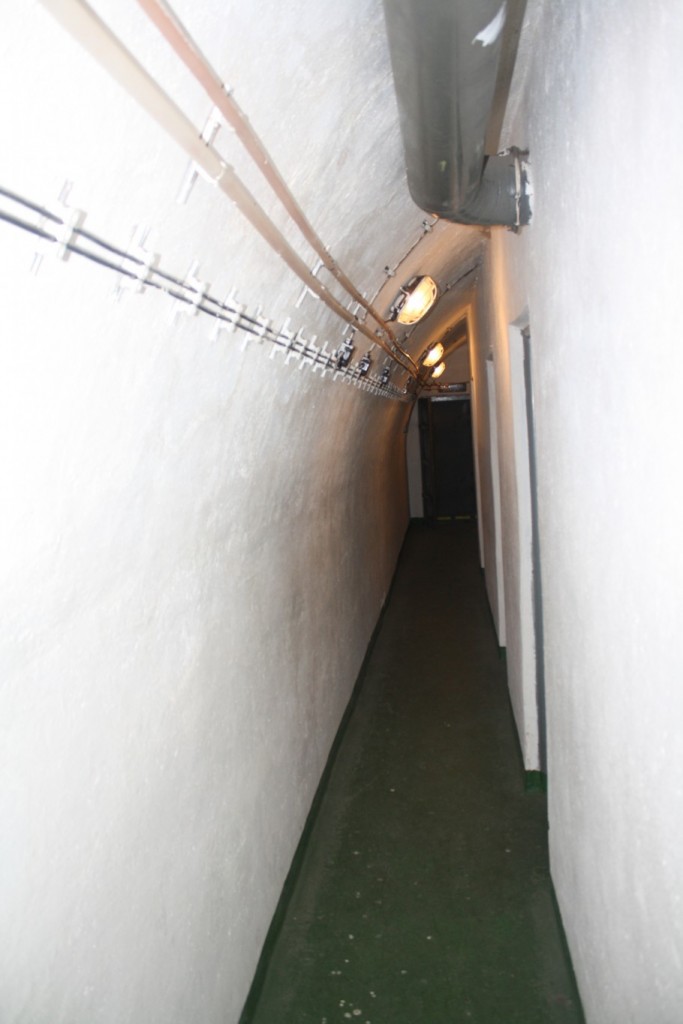 Michal also explained that the main diet would be beans. High protein and easily stored. 12 toilets might not have been adequate though. 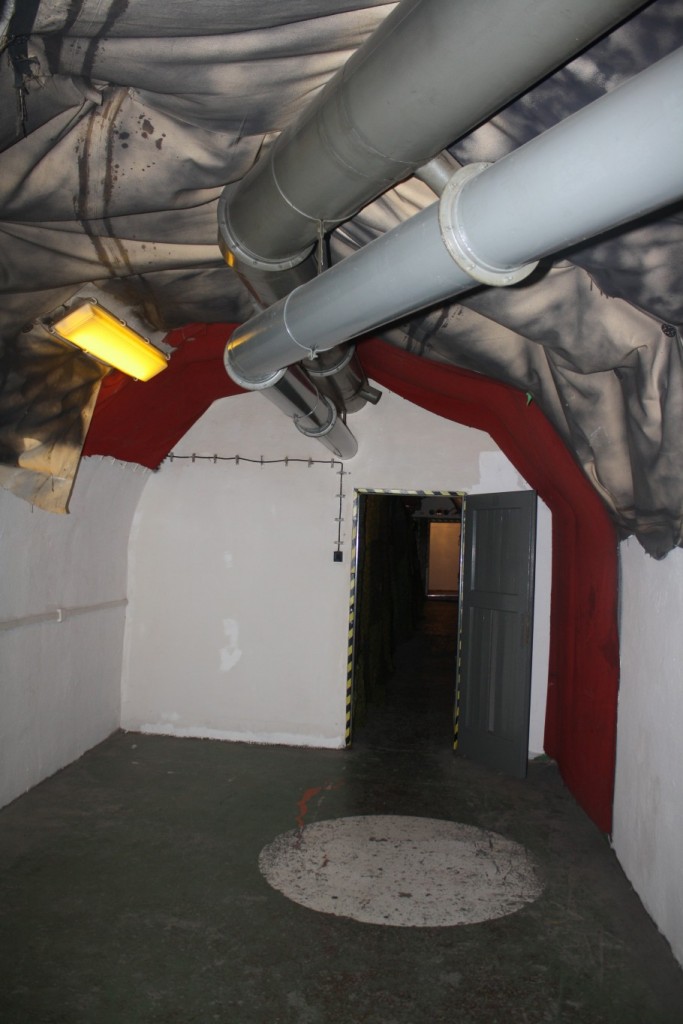 The district the bunker was constructed to save, had a population of almost 50,000. This meant it was first come first saved if a blast went off. Or I guess whoever was still alive. 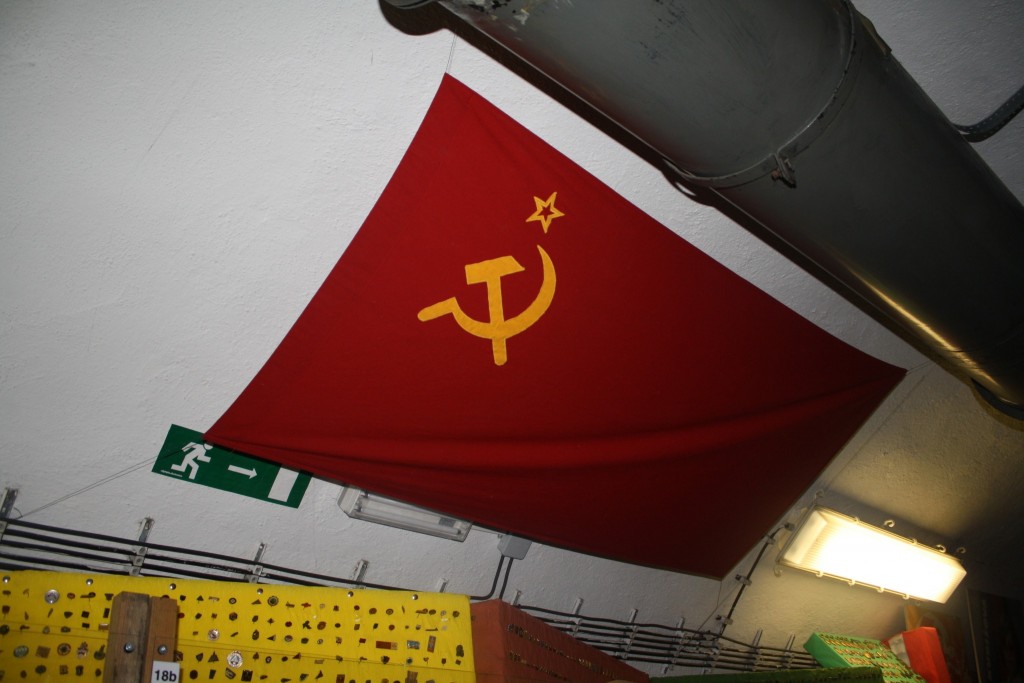 Anyone that did make it here could then look forward to a bleak and harrowing month of survival. There would barely be enough room to move in the narrow corridors, and once the supplies ran out, if help hadn’t arrived that was it. 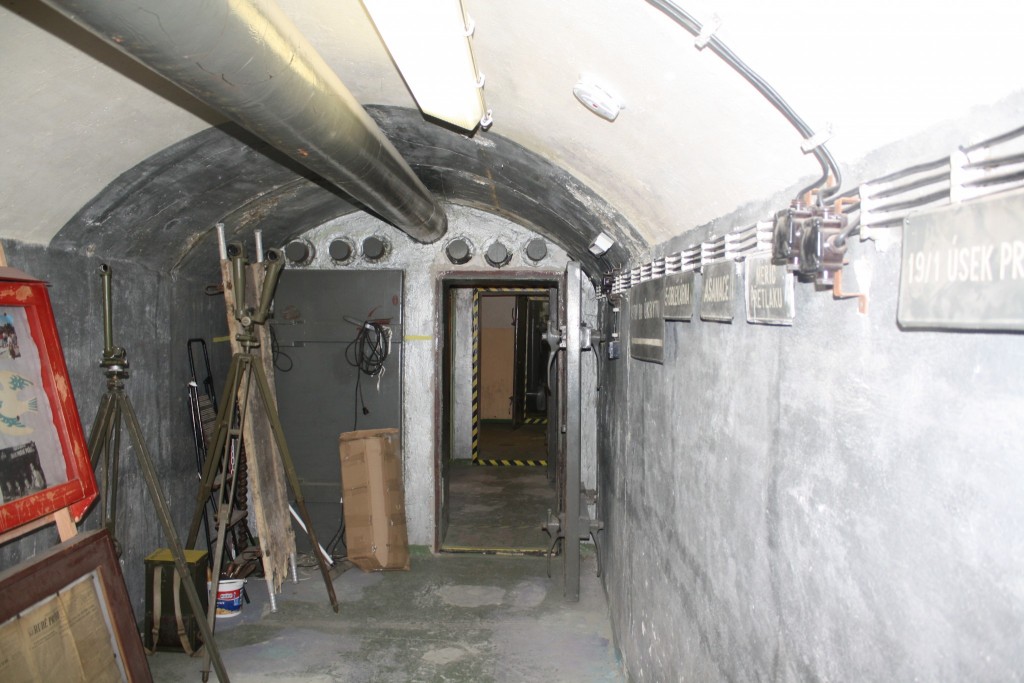 There’s still a vast array of old equipment in the tunnels, left behind when the complex was abandoned. The company that runs the bunker tours has collected a lot of Soviet era memorabilia too, including a ridiculous number of gas masks and put these all on display in a below ground museum. 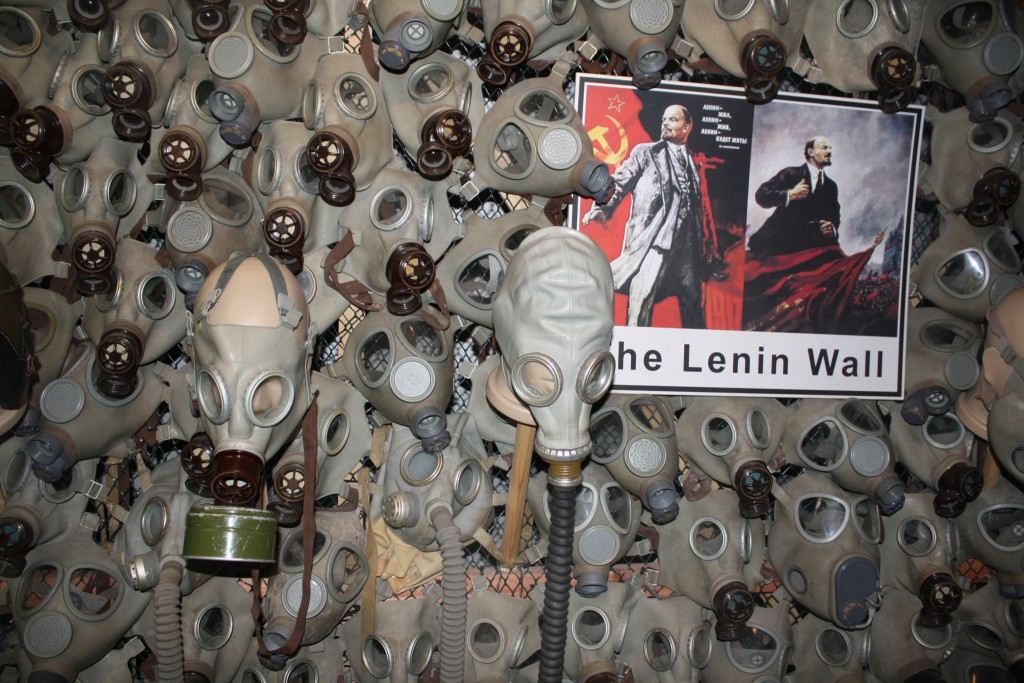 In the 1970s, the bunkers were phased out of any nuclear survival plans. The Prague metro system which was being constructed, was a much better shelter, able to hold hundreds of thousands of citizens. 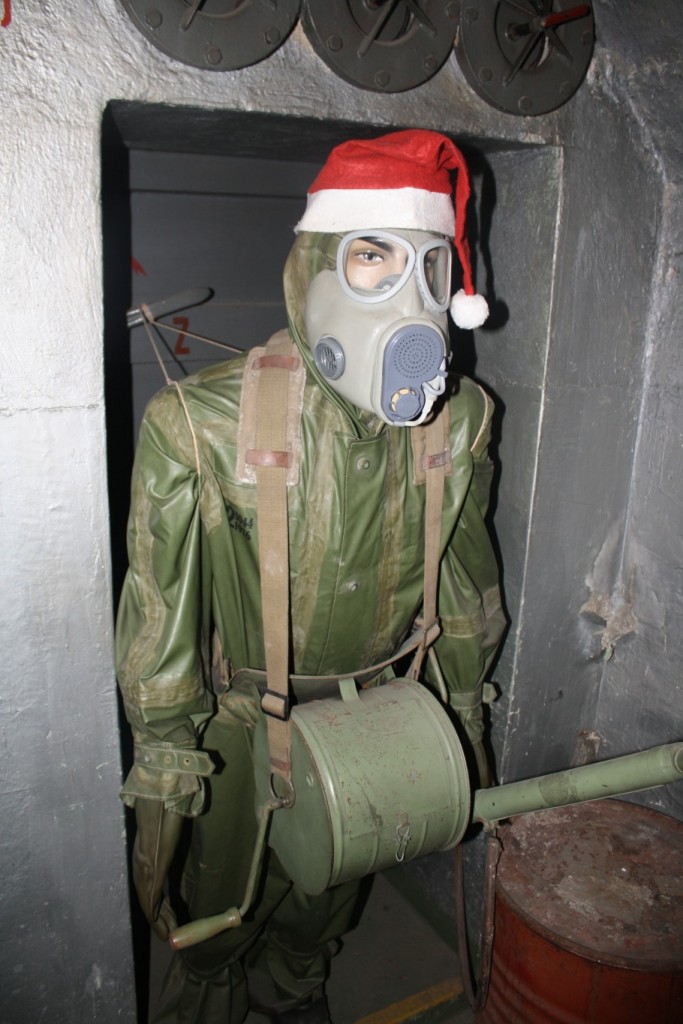 The people may have been safe in the event of a nuclear holocaust, but above ground, the nation was in the grip of fear. The 60’s had seen the Czech government become more liberal. Too liberal for Moscow. In 1968 they rolled in the tanks to depose the current communist government and replace it with a more communist government- and the last tank wouldn’t leave until 1991, after the fall of the Soviet Union.

In 1989 Prague witnessed its own revolution, the ‘Velvet Revolution’. So called because of its relatively peaceful nature. Only a few people were killed. The communists stepped down in the face of overwhelming opposition, and the path to democracy and to the modern nation of Czech Republic was finally allowed to be trodden.

The only way to access the bunkers are on special tours. I visited on the appropriately named ‘Prague Communism and Nuclear Bunker Tour‘.

For more underground adventures why not read about the ‘Catacombs of Rome‘?