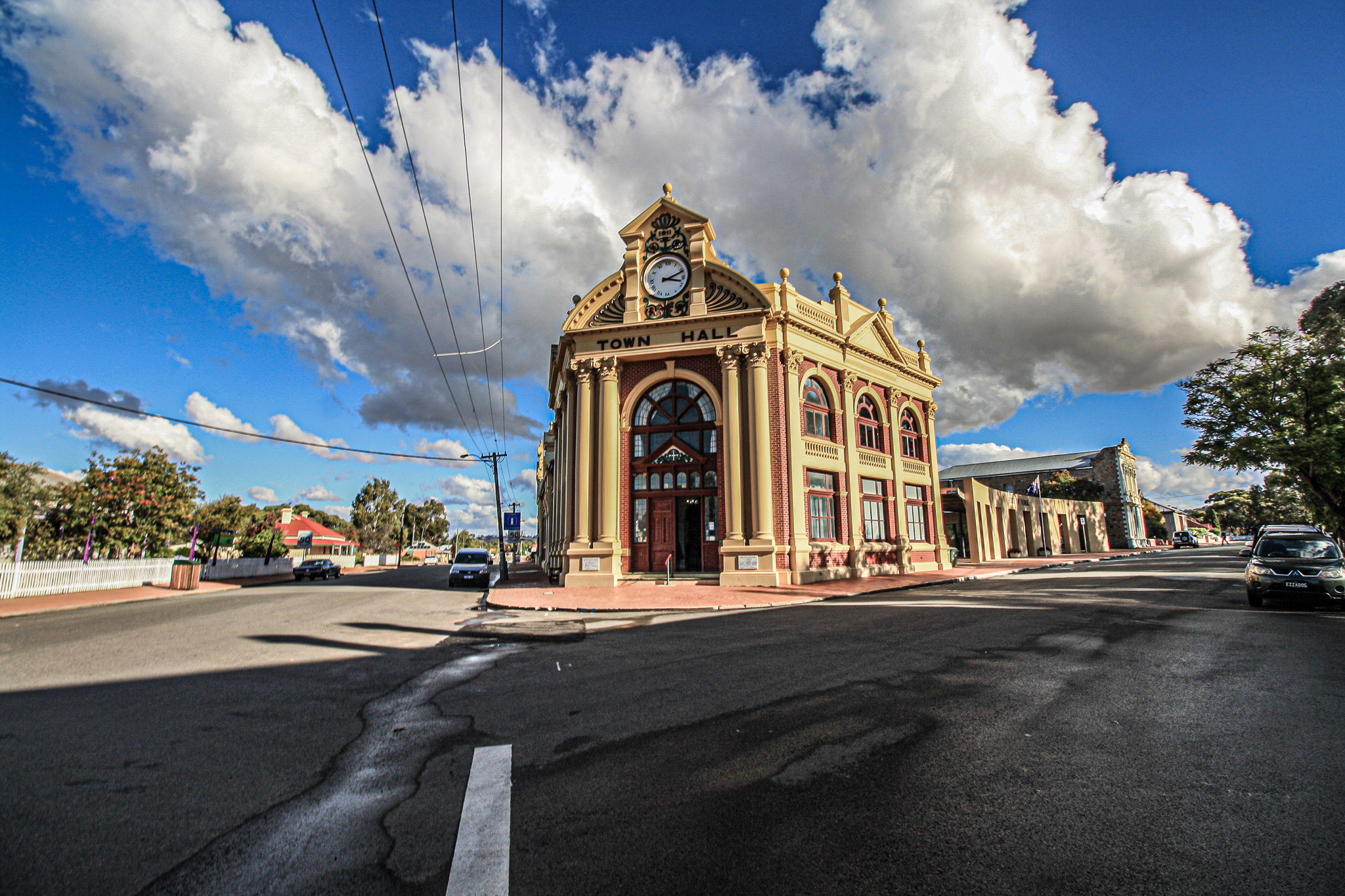 York WA is one of the most historic cities in Western Australia, but it’s an often overlooked destination on the tourist trail, perhaps because there are no beaches and no iconic natural attractions, like in the better-known destinations along the coast of the state.

But that doesn’t mean that this isn’t a scenic place to visit, and along the Avon River – so-called because it reminded the English settlers of the English river of the same name – you’ll find plenty of outdoor scenes and a wealth of history. Of course, there are no beaches because York WA is found inland, and in fact, this was the first inland town to be founded by Europeans in the 19th century.

York WA is just one and a half hours away from Perth, and it makes for a great day trip from the state capital. There are lots of things to do in York WA, because here you’ll find one of Western Australia’s oldest towns, and if history is your thing, then there are few better places to visit in WA.

York Western Australia is really a destination for the history buffs out there, and it makes for a great change from the coastal itineraries that take you from Perth to Broome, or south from Perth to Albany, as the scenery is utterly different and the heritage compelling.

Most of Western Australia’s top sights are usually found along the coast, but that’s just one more reason to escape the trail and head over to explore the best things to do in York WA.

York WA was founded in 1835 by settlers from the Swan River Colony – which would grow into Perth – who began heading inland. While many settlements had already been founded along the south-west coast, such as Busselton and Albany, York would be the first to be founded away from the Pacific Ocean and marked the growth of European advances deeper into Western Australia.

As the European populations grew, there was a need for more farmland and more food, and York WA would become a centre for agriculture, as settlers spread across what is now known as the Wheatbelt. When gold was discovered further east in the Outback, York would also become an important transit point on the way to gold-rush cities such as Kalgoorlie.

But that advance into the hinterland would result in deepening conflicts with the Aboriginals who had lived on the land for thousands of years. Confrontations and skirmishes became common on the frontier here, and at York’s Gaol, you can even see the harrowing cells that were constructed, and mainly served to hold Aboriginals. The Aboriginal name for the region is Balladong, and this was the land of the Noongar people, but like many places in Western Australia, York WA has mixed history, and often, the bloodshed is overlooked.

The Best Things to do in York WA

There are many fascinating things to do in York WA, but the main focus, if you hadn’t already guessed, is the history and heritage of the town. Much of York’s historic architecture is well preserved, and in many ways, it still has the look of a frontier town – but with all the perks of the modern world, of course.

This isn’t a huge place however, and you can easily work your way through the best things to do in York Western Australia in a day.

Your first stop in York WA will be along the main street, as to learn about the intriguing history of the town, the York Courthouse Complex is the best place to begin.

York was no exception and as the town grew, a courthouse and Gaol were built in the 1850s, but the primary purpose of them would quickly become their use as holding and trial area for Aboriginals, most of whom were unjustly held and sentenced.

Surprisingly, the Courthouse Complex – which is preserved by the Australian National Trust – actually delves into this difficult topic more so than any other museum I ever visited in Western Australia.

You can see the cells where the prisoners, mostly Aboriginal, were held in grimy conditions before trials. Many would be sent to prison camps on Rottnest Island – that well known holiday island – and the Courthouse Complex actually tells the tale of several of those who were convicted for crimes they didn’t even realise they were committing. The Courthouse Complex and Gaol alone, are well worth making the journey to York to see.

The grand facades of the York Town Hall aren’t quite as old as the Courthouse, but this functioning public building is one of the architectural delights of the main street. The Town Hall dates back to 1911, when it was built at a time when York was benefitting from the expansion east into the Goldfields, and earning its share of the ever-growing Western Australian economy.

Here you can find marvellous examples of WA’s unique Jarrah wood which was used in the construction, while this is also where you can find the local Visitors Centre, and any information you might require during your stay in York.

One of the best things to do in York WA is to visit the York Motor Museum. This quirky museum has one of the most extensive collections of automobiles in Western Australia, and you can find vehicles here dating back as far as the 1920s.

It’s a fantastic place to learn about Australian motor history, and you’ll find a vast array of heritage cars and classic cars on display. This is a completely private collection too, and it’s really a tribute to the dedication and passion of the founder, Peter Briggs, who opened the museum in 1979.

Since then it’s welcomed motor enthusiasts from across the world, and the collection has steadily grown year on year into the comprehensive exhibition that you can explore today when you are visiting York Western Australia.

To continue delving into the intriguing history behind the town, one of the best things to do in York WA is to call into the Residency Museum.

The museum focuses on local history, and you can learn more about the founding of York and the settlement of the wider area during the 19th century. The exhibitions focus on the lives and stories of local residents, and you’ll gain an insight into what it would have been like to live here in the early days when this really was the frontier of Western Australia.

The building that the museum is housed in is one of the oldest in York, as it dates back to the 1850s. Over the decades, it’s been used variously as a Convict Depot, a hospital and of course, now it’s a museum.

York has some great and eccentric shopping opportunities along the main street. This is heritage central, and in many of the historic buildings, you’ll find equally historic businesses.

The local sweet shop is a favourite amongst visitors, not just for its excessively large stock of sweets and chocolates from around the world, but due to its rustic, 19th-century look that’s perhaps more at home in Victorian London than in Western Australia.

There are also art galleries, great, independent restaurants and a quirky bookstore stacked to the rafters with secondhand books collected from across the world.

York WA is surprisingly beautiful, but given that I’m from England, I still failed to see how the scenery really is like that found in either York or the Avon Valley in the UK. That doesn’t mean it’s not scenic, just different, and the explorers that founded the town must have been decidedly homesick to be reminiscing this much when they named the place.

The Avon River though is about as green as it gets in dry and dusty Western Australia, and along its banks, by the town centre, you can find public barbecues and parks to enjoy during your stay in York – just don’t go swimming in the water; you’ll see signs warning you about contracting Amoebic Meningitis…

The main attraction on the Avon River is the suspension bridge, which allows you to cross over the river and to hike along the trails on the other side while offering great views all along the waterway.

End your day in York WA with a hike to the top of the Mount Brown Lookout. Located on a hilltop overlooking York, it takes around one hour to walk to the top from the town centre. You can drive most of the way up though if you’re short on time or just feeling lazy.

The best time to visit is for sunset, as you’ll have epic views over to the west, as the sun goes down over the horizon. You can see for miles, but the scenery at the top is just as fascinating as the scenery below, as the summit is littered with large, round, granite boulders that make for an intriguing sight.

You’ll even find a few public barbecues near the top, as well as picnic benches and toilets too.

No Australian town is ever complete without a few classic pubs, and in York, you have a few to choose from. They range in quality, and some are dives that have seen better days, but which are perfect for cheap drinks, good portions of food and an insight into small-town pub life in WA, which on weekends, is interesting to say the least.

The Castle Hotel in York is the oldest pub in the town – and by default, the oldest inland pub in WA – and they have a solid menu of food and drinks, in a historic setting.

Greenhills, which is outside the town, and the Imperial Homestead which is in the town centre, are two other options, while along the main high street you’ll also find cafes, bakeries and a selection of other restaurants, including a Chinese.

Most of the pubs also double as hotels, if you’re looking for a place to crash for the night when visiting York WA.

On your drive back out of town, you can call in at the York Olive Company, which is located in the countryside between York and Perth.

If you’re into olives, then it’s a must-see, but also, if you love ice cream, then hands down you can find the best ice cream in York WA for sale in the farm shop here.

Map of Things to do in York WA

How to Travel to York WA

The easiest way to travel to York WA is to drive, and the town makes for a great day trip from Perth. It’s just 90 kilometres away, and you can cover the distance in around one and a half hours – which in Western Australia, is no distance at all.

The old train station in York has been in disuse for a long time now, so there’s no train connection here from Perth. If you need to take public transport, the only option is to jump on a Kalgoorlie or Esperance bound bus from Perth, as many will pass through York on their way. You can take a look at TransWA for their schedules and routes.

If you are looking for a road trip and not just a day trip from Perth, you can also easily include York WA on a multi-day itinerary heading into the Goldfields.

Travelling from Perth to York? Sign up for Air BnB to book your accommodation using this link HERE and you’ll get £25 free credit towards your first booking!

Things to do in Geraldton, Western Australia