With the Coffee Farmers of Antigua Guatemala 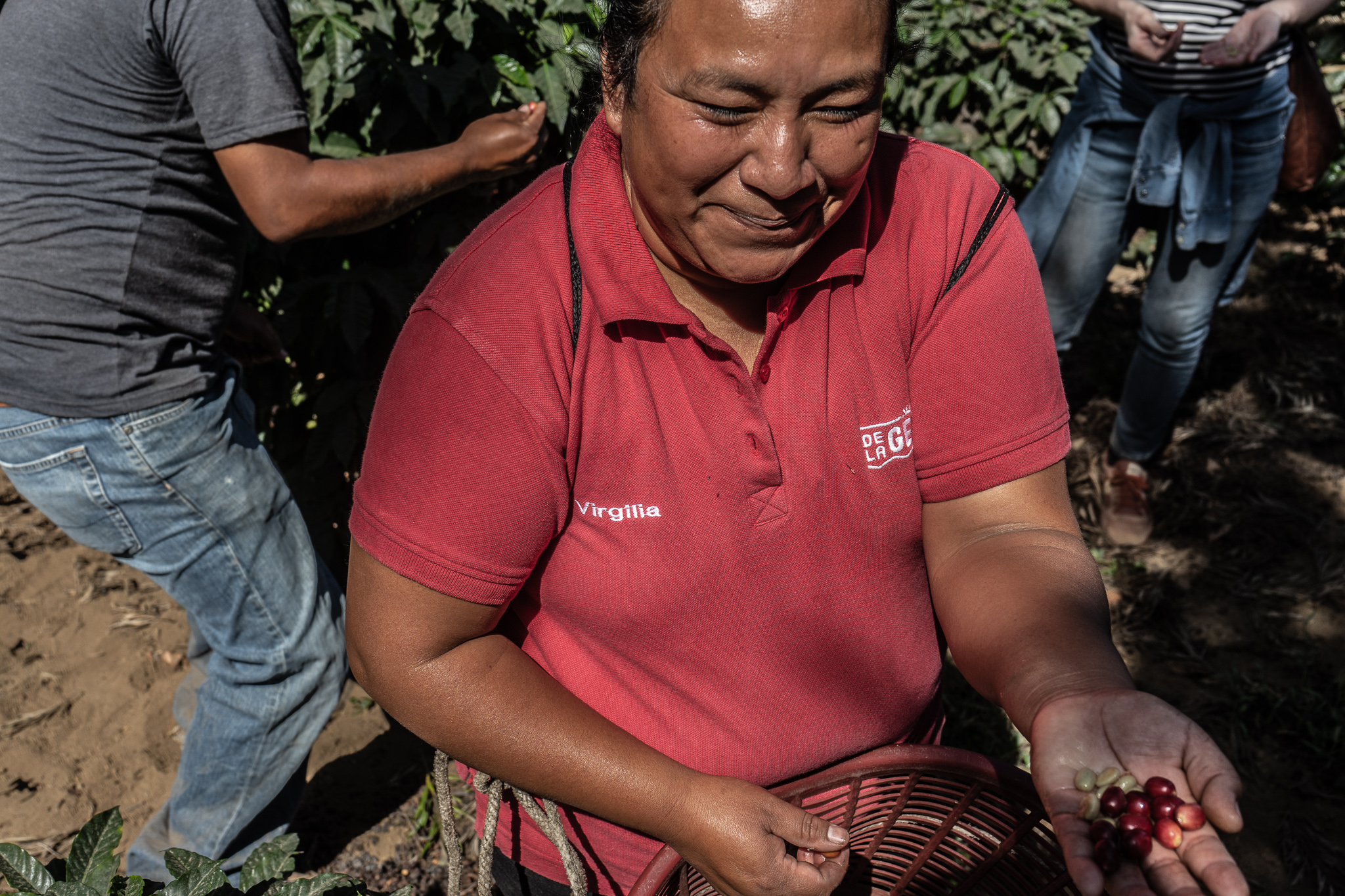 Volcan de Fuego is spouting out smoke in the distance, as Axel, a local from Antigua Guatemala, tells me not to worry. “The last eruption was just last year”, he says cheerily. “We have a while to go before another!”

Antigua is surrounded by volcanoes, and from where I’m standing in Ciudad Vieja, on the outskirts of the colonial city, I can see at least three distinctive peaks, in various stages of activity.

Antigua was the first capital of Spanish Central America, but earthquakes and volcanic eruptions in this volatile part of the world destroyed the city on more than one occasion and forced many of the inhabitants to leave.

Those that remained though found that the soil on the slopes of the mountains was particularly fertile and as Axel was about to show me, in recent years it’s proven to be particularly perfect for the growing of coffee.

Ciudad Vieja is now a suburb of Antigua but in the town plaza is one of the oldest churches in Guatemala. “Iglesia San Miguel Escobar was built in 1527”, Axel explains. “It was one of the first stone churches to be built by the Spanish. But that was before Antigua was destroyed”.

“The church was the centre of Antigua back in the 16th century. But an eruption a few decades after it was built destroyed the town”, Axel tells me as I watch Volcan de Fuego simmering away on the horizon.

Parts of the church survived that deadly episode in 1541, but the new colonial government made the decision to build a new capital down the road, on the site of present day Antigua. In 1776, after a century of devasting earthquakes, the capital was again moved to its current location, Guatemala City.

This is a country shaped by the powerful forces of nature at work deep beneath the surface of the earth, and for locals like Axel, a smoking volcano is just part of daily life. And as I was about to see, there are some distinct advantages to enjoy too, when it comes to agricultural.

Agriculture in the Shadow of the Volcanoes

Axel acts as a translator and introduces me to Virgilia Lopez, a local coffee farmer who would be guiding us through her small plantation on the slopes outside of Ciudad Vieja.

Agriculture has always been important here, given the availability of super fertile soil in the shadow of the volcanoes, but coffee is a relatively new introduction to Antigua.

Coffee beans began to be grown and exported from Central America in the mid 19th century, but Virgilia explains that “Coffee only arrived in Ciudad Vieja 13 years ago. Before coffee, we mostly grew zucchini and other vegetables, but coffee has been much more profitable”.

“This used to be a very poor town, but now we can afford to have our kids sent to school, rather than working in the fields”, Virgilia continues proudly. “Things have improved a lot here, and it’s thanks to coffee”.

Coffee has been a success in Ciudad Vieja, given the fertile soil and the relatively high altitude of the volcanic slopes where the farms are located. Coffee is labour intensive though and it’s by no means easy work, even given the appropriate climatic conditions, and I was about to discover just how difficult it is working here.

One organisation that has been working with the farmers of Ciudad Vieja to pool their resources and find new markets for their product, is De La Gente, who had helped set up this tour with Axel and Virgilia, and who have been helping the locals to set up co-operatives and find direct buyers abroad.

Axel explains that “The purpose of De La Gente is to provide a face to the farmers so that when you drink coffee you see the face of the hard-working farmer in the mug!”

“There are 28 members of the collective in Ciudad Vieja”, Axel goes on to say. “They grow different types of coffee. At lower altitudes, it’s mainly Robusta and at higher altitudes, Arabica is better”.

De La Gente means ‘of the people’ in English, and in the competitive coffee trade, they are helping small farmers like Virgilia to compete with larger producers, while also giving travellers like myself the chance to see that hard work in action, to volunteer to help even, and to gain a new appreciation for coffee production.

The Coffee Fields of Ciudad Vieja

From the church, Virgilia leads us out of town and uphill. Her small coffee plantation is found on the lower slopes of Volcan de Agua, which rises to over 3700 metres in height. It was Volcan de Agua which destroyed the first Spanish capital in Guatemala in 1541.

We are only walking to 1500 metres, where Virgilia grows Robusta beans on her family land. We pass through several other plantations on our way up, and there are fields of trees and coffee plants as far as I can, stretching ever higher up the slopes.

Virgilia begins to demonstrate the importance of the volcanoes, by telling me that “They add to the minerals in the soil. The ash from eruptions of Fuego even destroys a particular type of fungus found on the coffee leaves”.

Coffee is planted in June, July and August. The coffee plants have a lifespan that’s anywhere between 5 to 15 years, and generally, take 2 and half years to grow, before they can be first harvested. Virgilia demonstrates in her field how they measured the distance between each plant, before digging holes for the plants to be grown in.

Before this though, a small seedbed is made at her home using the healthiest berries. This begins to sprout and is then brought to the field to be planted. At the same time, other trees are grown around the coffee plants, to provide shade and to protect them from the wind. They grow a mixture of fruit trees, and even avocado trees, giving them extra produce to sell at the market too.

“It’s very labour intensive”, says Axel, as Virgilia shows us how the berries are picked and harvested from the coffee plants when they are ready. “The picking season lasts from December through to April. The pay for the pickers on these farms though, is almost double compared to the larger plantations, thanks to the higher prices given at the co-operative”.

A Cup of Coffee

After helping Virgilia to pick a bag of red berries from her field, we walk back into Ciudad Vieja to see the next step towards producing a cup of coffee.

At her home in the town, Virgilia has a bicycle-powered machine which separates the berries from the outside casing, leaving only the beans.

They are then placed in vats of water, where the bad quality beans will rise to the surface. These can be skimmed off, and then sold as a lower grade, probably for use in cheap instant coffee.

After this, the second layer of the bean is taken off by hand, and they are now ready for roasting. Virgilia demonstrates the process in her kitchen, as she roasts the beans we picked earlier on a pan.

“Now we have to grind the beans”, says Virgilia. “This is the same technique that my Mayan ancestors used to grind cacao beans for chocolate drinks. Now we use it for making our coffee”.

With a large rolling pin, Virgilia grinds the roasted beans on a stone mortar. Soon, she’s ground down enough to make a large pot of coffee. She disappears back into the kitchen, and the smell of the coffee wafts through the house.

She returns and pours out a mug of steaming, freshly prepared coffee for us all. It’s a long process, from planting to picking to grinding, to finally drinking that cup of coffee.

As I drank my cup of aromatic coffee, I had a new appreciation for the work that goes into its production.

Now, every time I order a cup of coffee, I can see the face of the farmer and their hard work in the mug I’m drinking from.

Travelling to Guatemala? Sign up for Air BnB to book your accommodation using this link HERE and you’ll get £25 free credit towards your first booking!