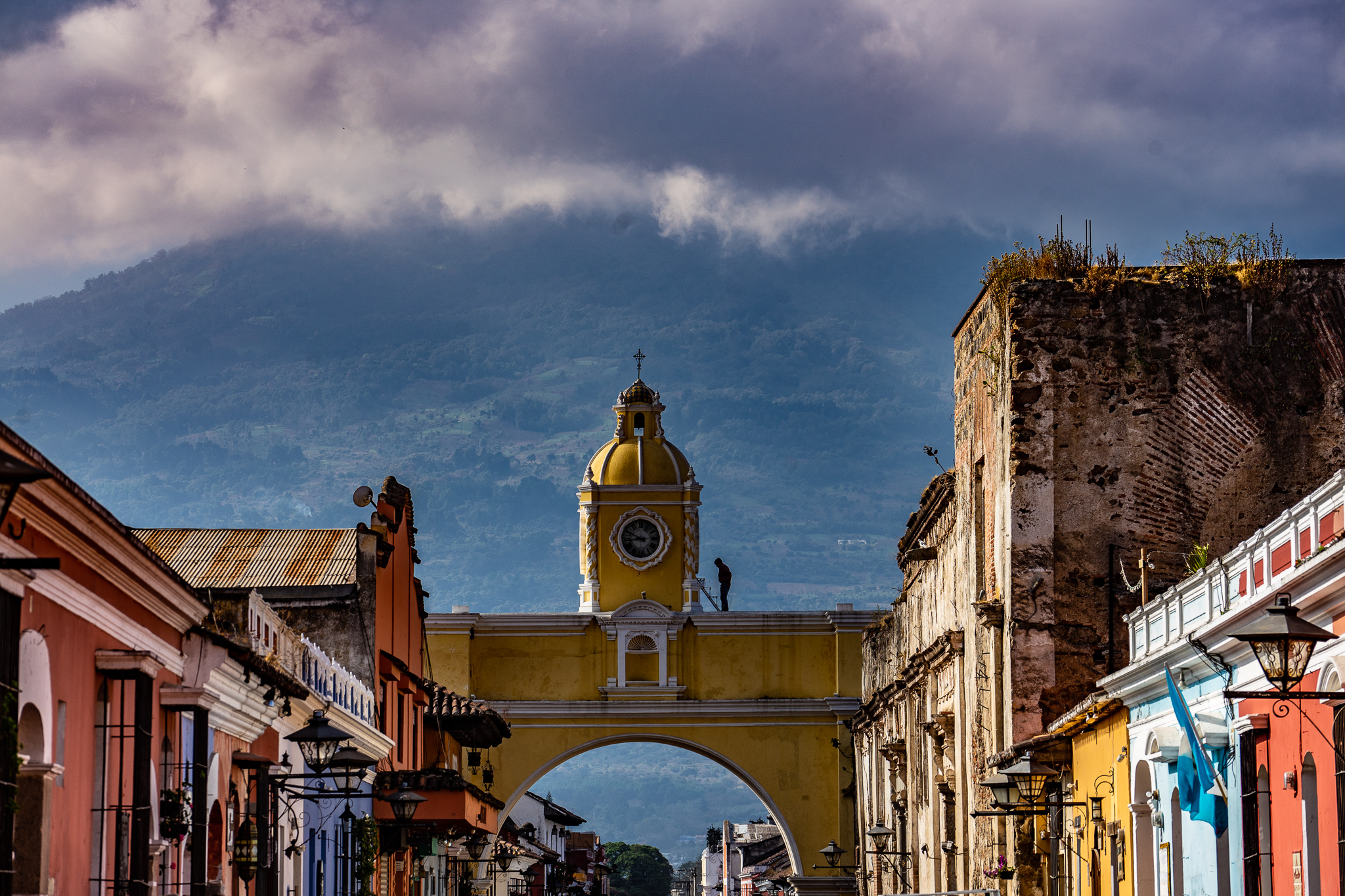 It’s been a long and bumpy ride from Mexico to Guatemala, the second country on my tour around Central America. From the mountains and guerilla strongholds of Chiapas State, I headed down south to the volcanic surroundings of Lake Atitlan, one of the most supreme looking destinations in Guatemala.

From Lake Atitlan, I travelled further south, to the colonial city of Antigua, once a former capital of Spanish Central America, but a place reduced to rubble on more than one occasion by volcanic eruptions and earthquakes.

Here are the latest Photos From the Road, as I explore volcanoes, lakes and colonial cities in Guatemala.

Guatemala, like most Central American countries, seemed from my research to have somewhat of a negative reputation, at least in terms of safety. Central America is regularly bearing the brunt of zealous travel warnings, and high homicide rates and crime levels seem only to exacerbate this.

In southern Mexico though, from fellow travellers, I’d heard nothing but good things. Good food, spectacular scenery, a welcoming culture. It all seems at odds with the picture painted by the media of a violent and unstable part of the world. That image isn’t simply conjured up of course, but as one local would tell me, it wasn’t tourists that had to worry about the crime, it was the locals who suffered it – an unusual situation to be in.

Sticking to the main destinations and keeping out of trouble doesn’t prove to be too difficult though, and it’s surprisingly easy to traverse Guatemala.

My first stop on the road through Guatemala was Lake Atitlan, a volcanic body of water surrounded by high mountains and smoking volcanoes. The lake is surrounded by several different villages and towns, each with their own unique character and all connected primarily across this vast area of fresh water by fast boats that offer the quickest method of transport here.

I arrived in Panajachel, the largest city on the lake. It’s not necessarily the best looking, but it’s a place that’s still full of local character and plenty of bars for the tourists. The long boulevard overlooking the lake offers great views, particularly as the sun is setting and a cold beer is in hand.

From Pana – as the locals call their town – I set off across Lake Atitlan to the opposite side, where in the shadow of a volcano lies the small village of San Pedro.

San Pedro La Laguna is named for the ominous San Pedro volcano that towers over this small, hilly village. One street packed with backpacker bars lines the lakefront, while the streets rise almost vertically to the main town, a world away from the restaurants and pubs just down the road. It’s a tale of two villages, but you can find cold beers and good food everywhere, with views over the lake in one direction and views out to the high volcanoes behind.

Winding roads lead up the mountainside, offering an encompassing panoramic across Lake Atitlan, and from here you can visit the surrounding villages, where each has a different atmosphere, a different crowd and a different culture.

From Lake Atitlan, after enjoying one too many beverages around the waterfront, it was time again to head south, to the city of Antigua. Dating back to the days of the first Spanish colonial incursions into Central America from Mexico, Antigua still retains much of its historic past in the cobblestone streets and ramshackle buildings.

The city was the first capital of Spanish Central America, having been founded in 1524 on the site of a conquered indigenous town. For over 200 years, it served as the region’s main colonial settlement, before a series of devasting earthquakes and volcanic eruptions through the 18th century forced the capital to be moved to nearby Guatemala City, which is the current capital of modern, independent Guatemala.

High volcanic peaks surround Antigua, with Volcan de Agua constantly looming in one direction, and Volcan de Fuego continually puffing smoke in the other. It’s a constant reminder of the volatility of the region, but it doesn’t deter locals from living here or tourists from visiting.

Amongst the restored streets, you can still find most of the old churches and cathedrals of Antigua – some of the oldest colonial buildings in Central America – crumbling away, having been torn and shaken apart by successive natural disasters. It’s a poignant reminder of the tectonic forces at play in this volatile region.

The high altitude and fertile volcanic soil of Antigua provide the perfect conditions for growing crops, and in particular, coffee has become one of the most important resources in the surrounding area.

I ventured onto the slopes to visit a local coffee farm, where a family run business is successfully growing and exporting coffee beans as part of a collective.

I saw coffee in its rawest state for the first time in my life and was shown the slow process of planting, to growing, to picking and then refining into a product suitable for roasting and then brewing up into a strong, hot beverage.

Next up, I’m travelling through El Salvador, then onto Honduras. There will be many more articles on the way over the next few weeks from all over Central America, but until then, safe travels travellers!

Travelling to Guatemala? Sign up for Air BnB to book your accommodation using this link HERE and you’ll get £25 free credit towards your first booking!

With the Coffee Farmers of Antigua Guatemala