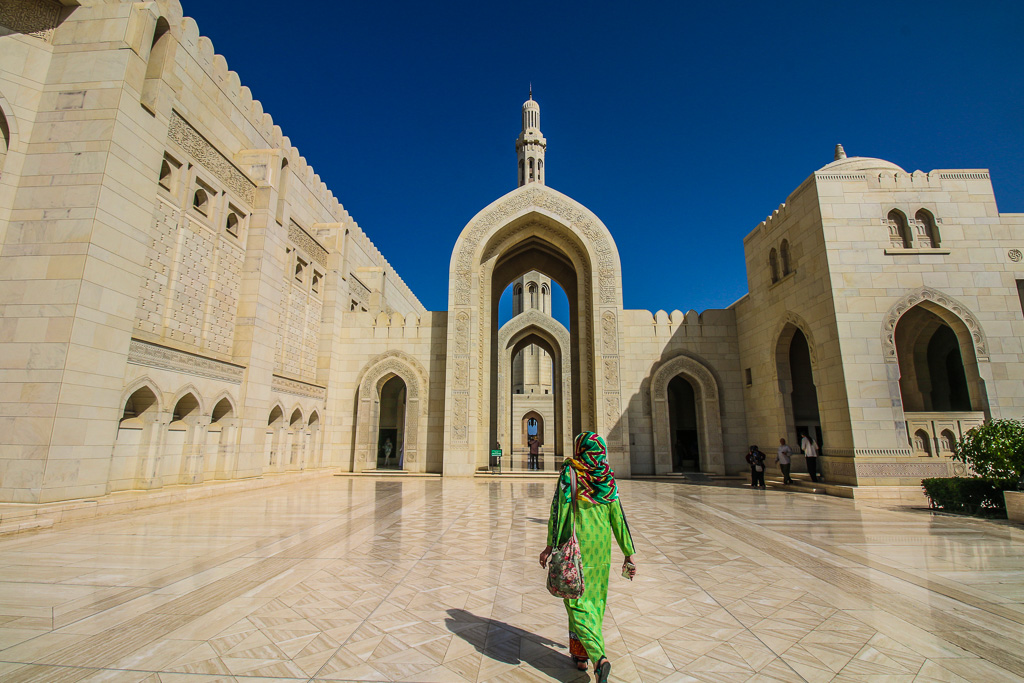 The Sultan Qaboos Grand Mosque In Muscat Is A Spectacularly Lavish Place Of Worship. Here’s A Look Inside This Grand Mosque, The Largest And Most Extravagant Mosque In Oman.

“You must cover up”, the gate keepers told my Mother as we tried to walk through the entrance into the Sultan Qaboos Grand Mosque in Oman. Her wrists and ankles were slightly uncovered although she’d made every effort to wear suitable clothing- even covering her head- and this just wouldn’t do of course if we wanted to see more of the Grand Mosque than the high walls and high minarets from afar. 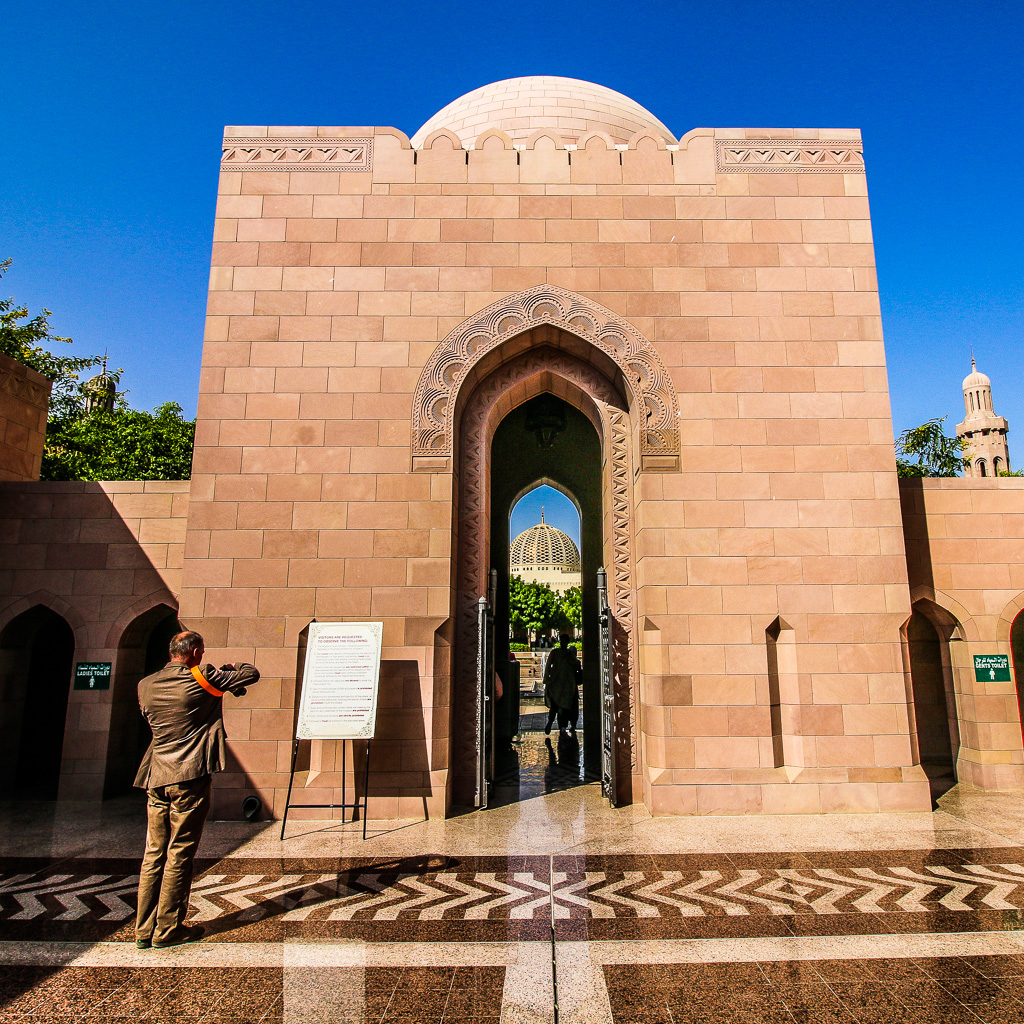 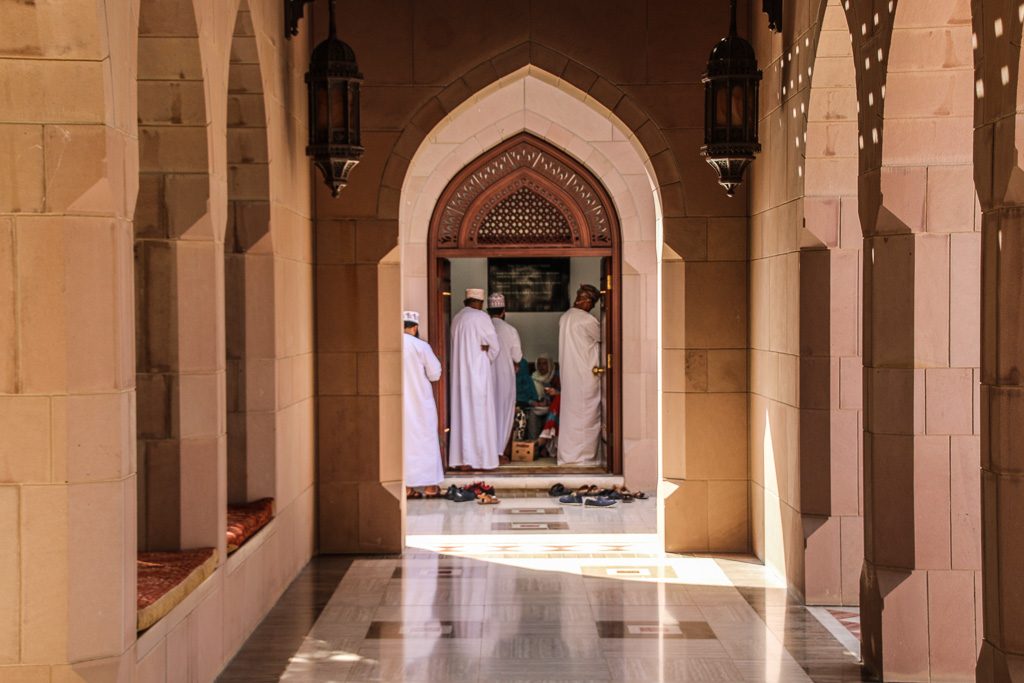 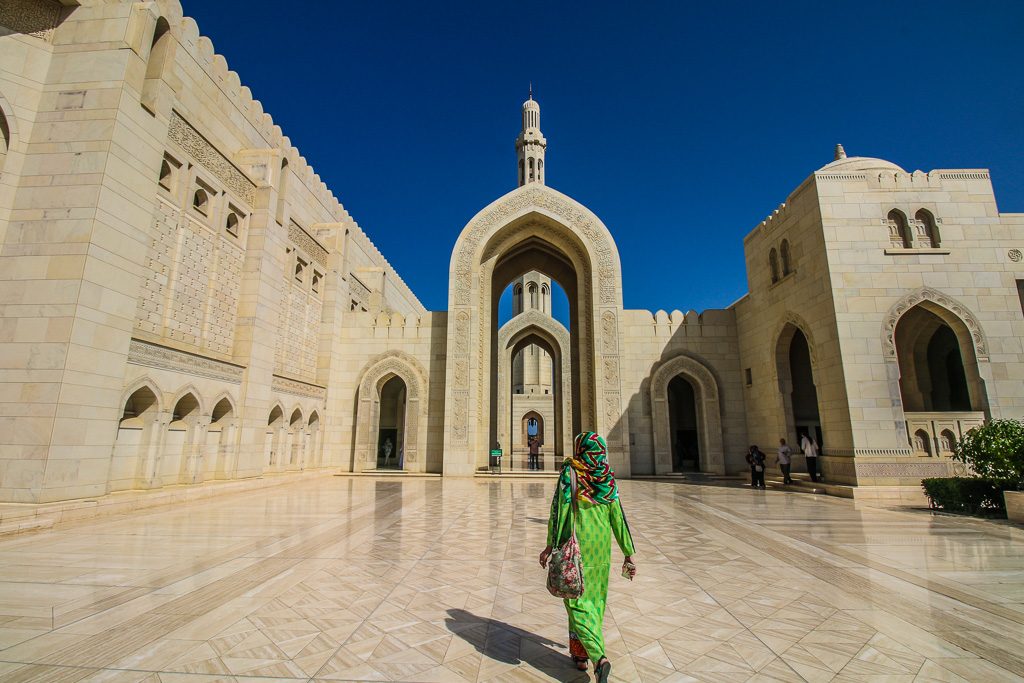 My Father and I were already dressed appropriately enough in long trousers and long shirts for this occasion. In the oppressive Omani heat though I was starting to falter, and was becoming increasingly jealous of the local Omani Dish Dasha, a long, flowing and airy outfit more suited to the soaring Arabian temperatures than a pair of chinos.

To gain access to the Sultan Qaboos Grand Mosque though, we would have to find a solution to my Mother’s immodesty, and this we found in the Mosque’s Gift Shop, where she purchased a long, green and flowery dress in traditional Omani style for a few Rials.

Now suitably attired, we were allowed through the entrance, and before us was the Grand Mosque shimmering white in the bright sun.

Inside The Sultan Qaboos Grand Mosque

I was travelling in Oman with my parents. We were on a nostalgic trip, returning to a country where we used to live, where I’d gone to school, twenty years ago. One of my lasting memories of the young years I spent here had always been visiting this exact place, the Sultan Qaboos Grand Mosque, although all I remembered was a huge construction sight, a huge work in progress larger than anything I’d seen being built anywhere before- although I was only seven. 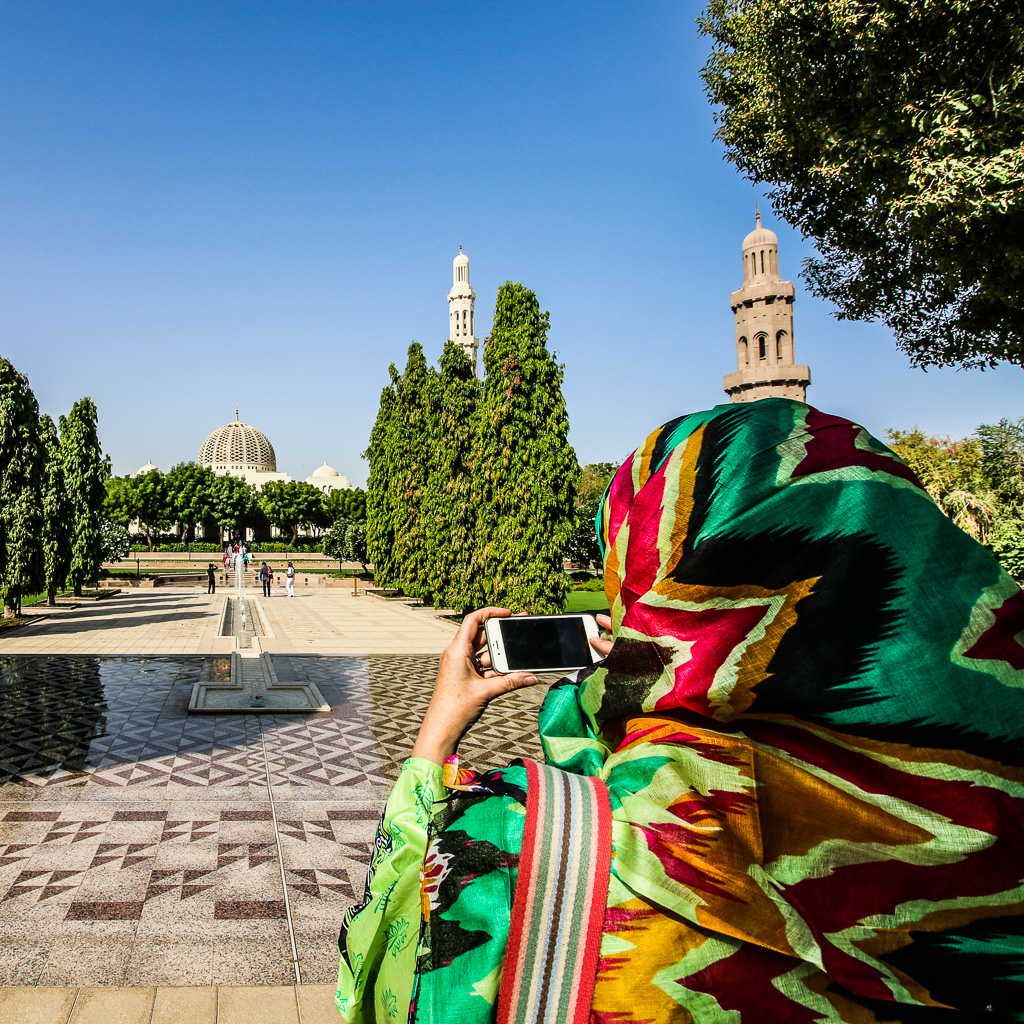 Muscat’s Grand Mosque is named for Oman’s long ruling monarch, Sultan Qaboos bin Said Al Said, who ordered its construction in his country’s capital. It was an ambitious plan. It would be the largest mosque in Oman, and one of the largest in the world too. 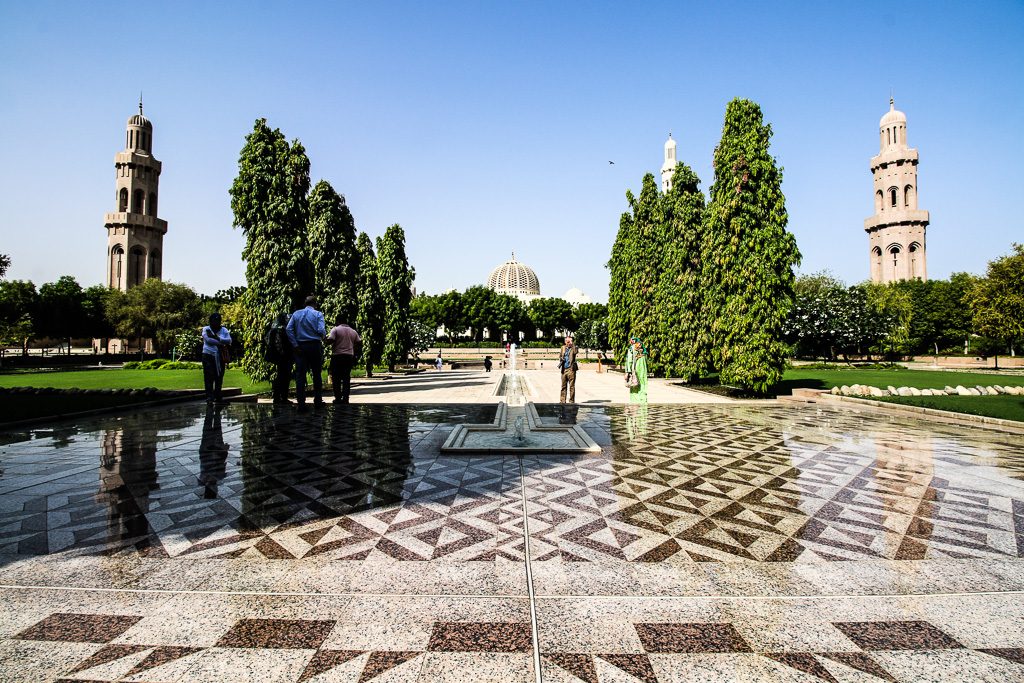 It took over six years to complete construction. Building of this vast complex began in 1994, and the mosque was only officially opened by the Sultan in 2001.

I visited in 1997- halfway through construction- and remember seeing an army of workers toiling in the sun to raise the towering minarets and huge dome that are prominent now. 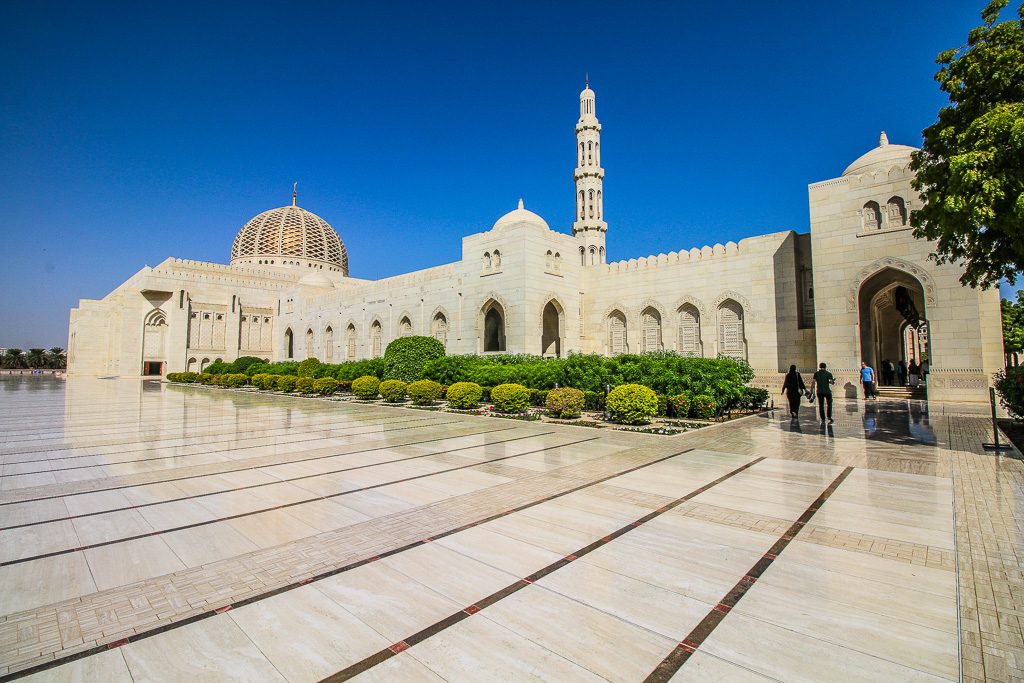 I left Oman long before the Sultan Qaboos Grand Mosque was ever finished, returning to England not long after visiting its construction site. Now though, I could see the final extravagance of the project I’d only seen covered in dust and debris.

As I walked through the entrance and across the glistening tiles on the floor the most unmistakable aspect of the mosque was not just its bewilderingly symmetrical layout, but its utter cleanliness. 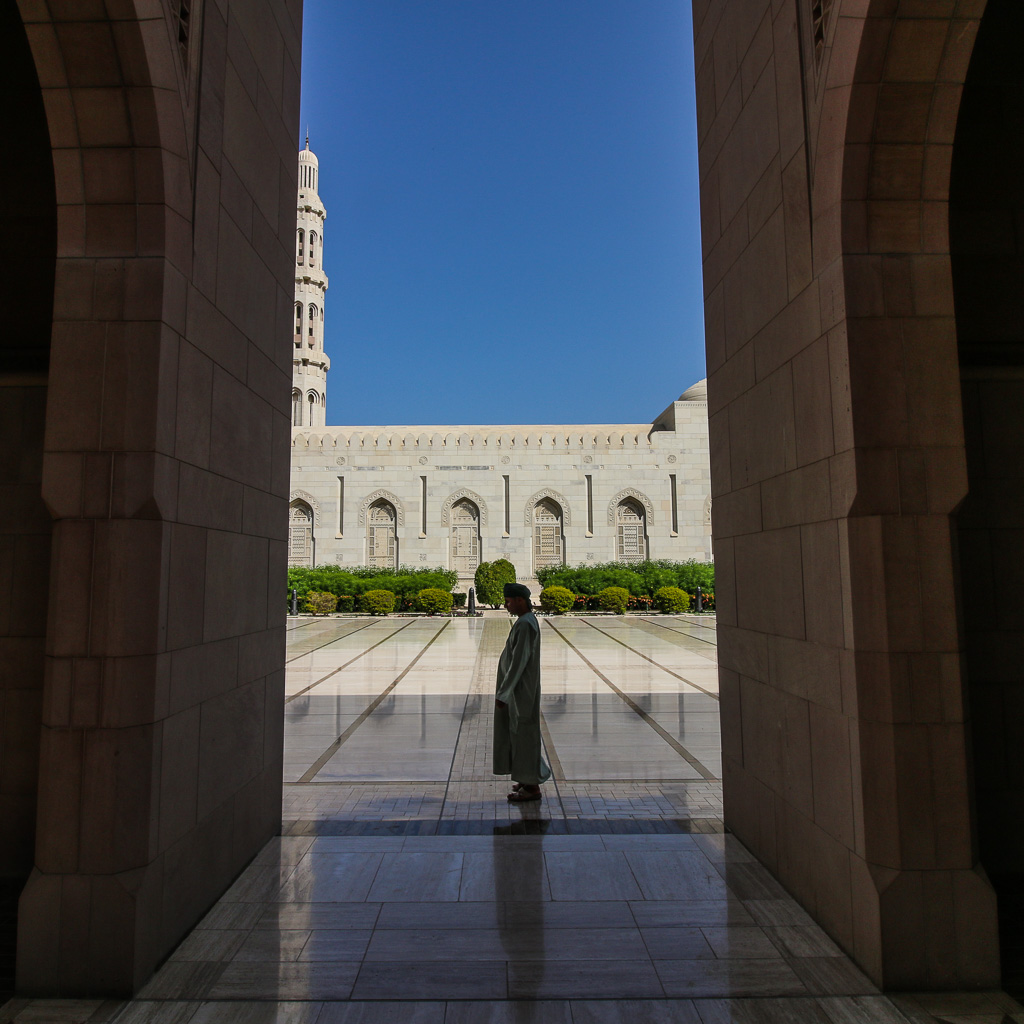 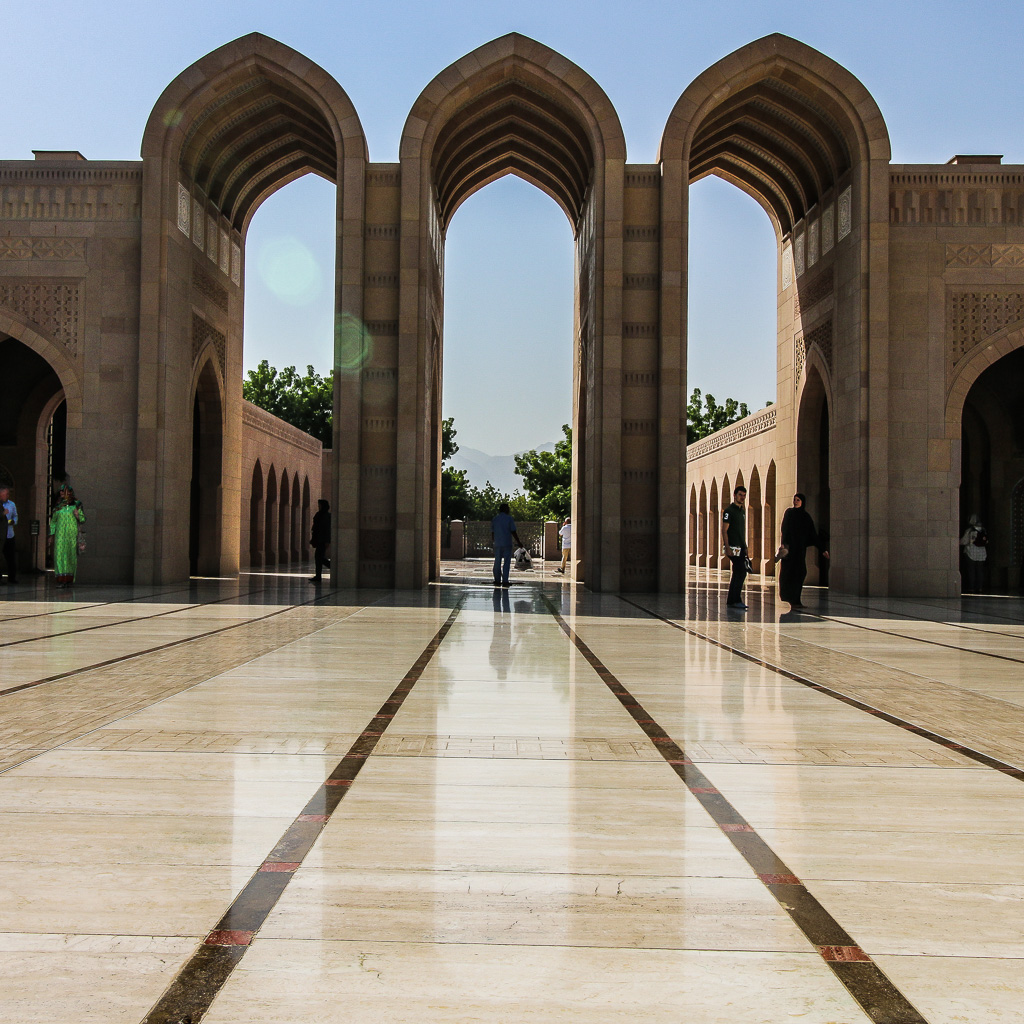 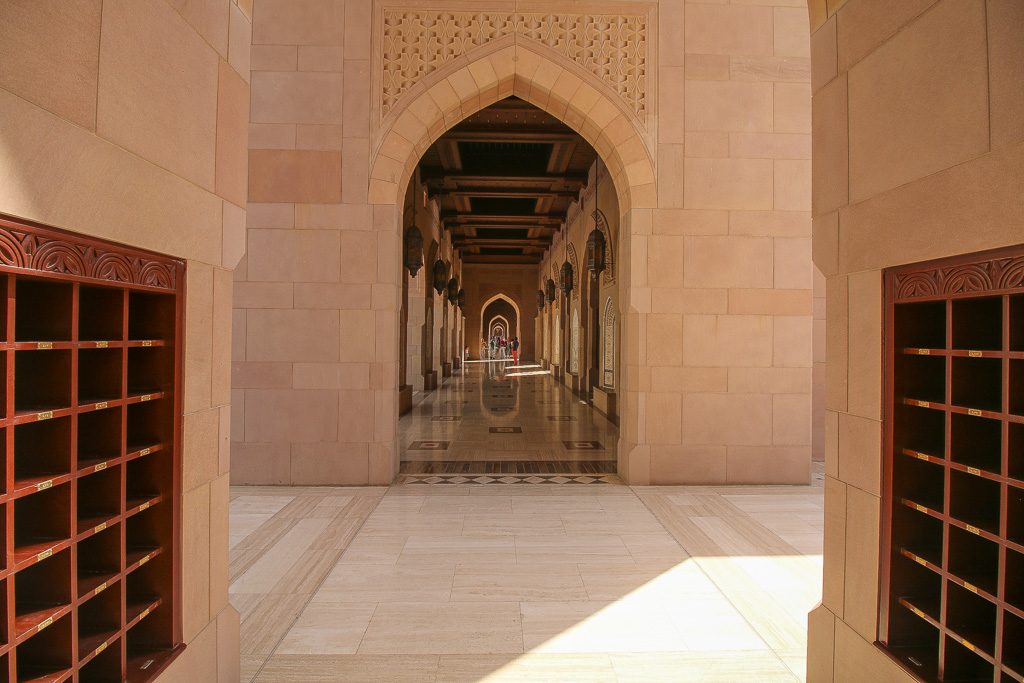 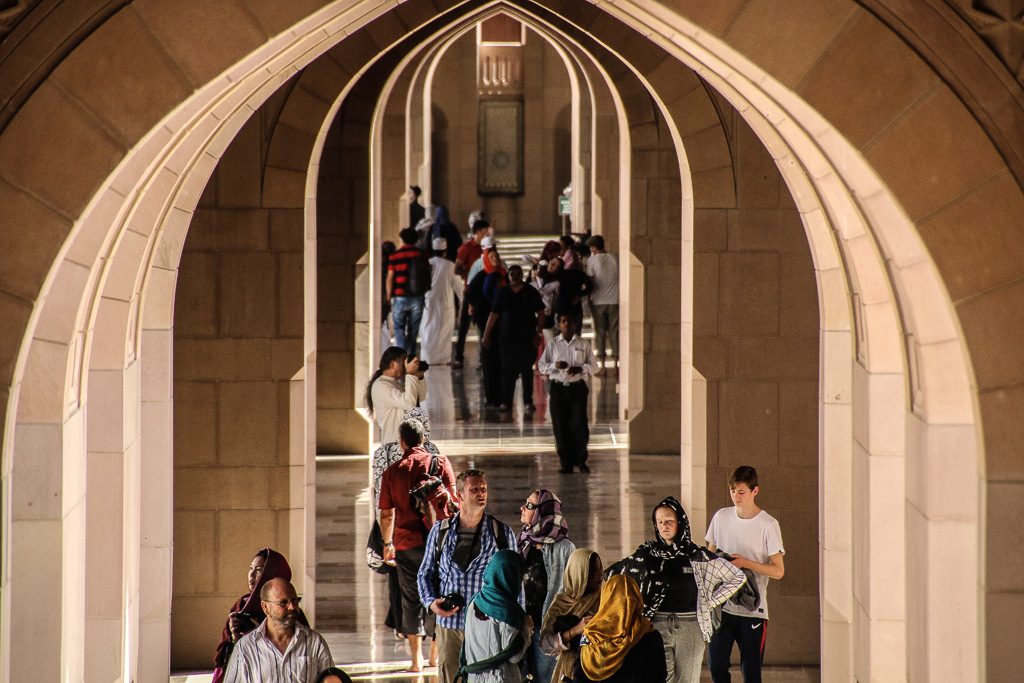 In the few days I’d spent in Muscat on this trip already, I’d been impressed with the overall cleanliness of the capital- at least in the areas I’d seen- especially for a country ravaged by dusty desert winds.

The mosque took care and cleanliness to an unprecedented level, and the tiles and ceramics literally glistened under the weight of unimaginable quantities of polish. It’s a mosque that truly does shimmer in the sunlight. 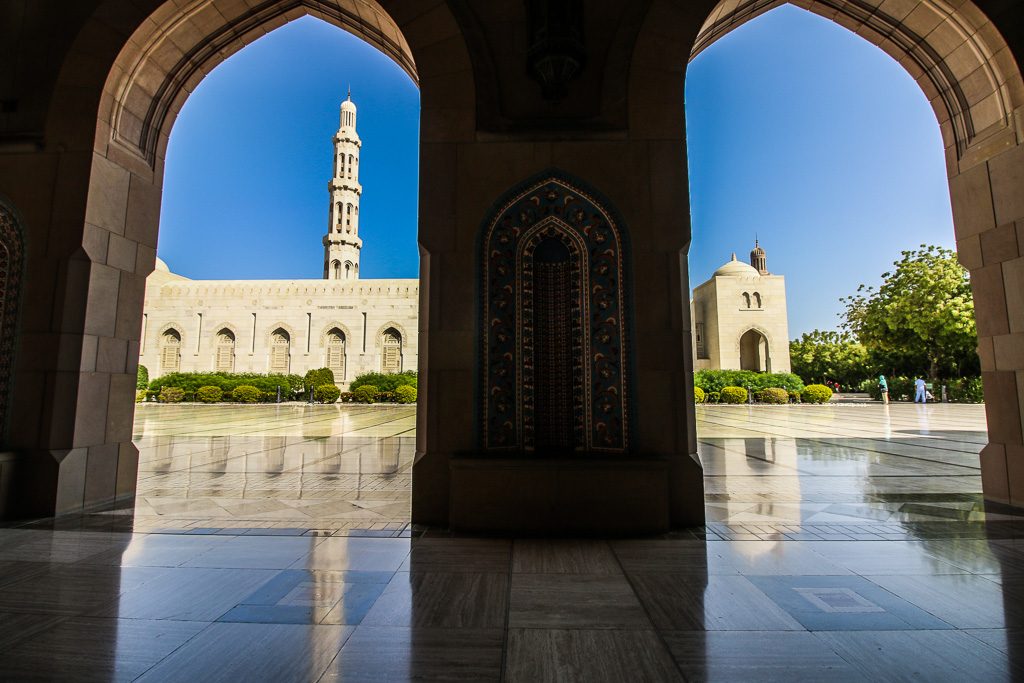 The mosque itself is split into several sections, and after walking through the green gardens surrounding the gardens we escaped the heat of the sun by visiting the Women’s Prayer Hall.

Men and Women prayer separately in Islam, and the mosque consequently has separate areas for each gender. As we were here during the visiting hours for non-Muslims, men were allowed in to see the female prayer room alongside the women. We all had to take our shoes off first though. 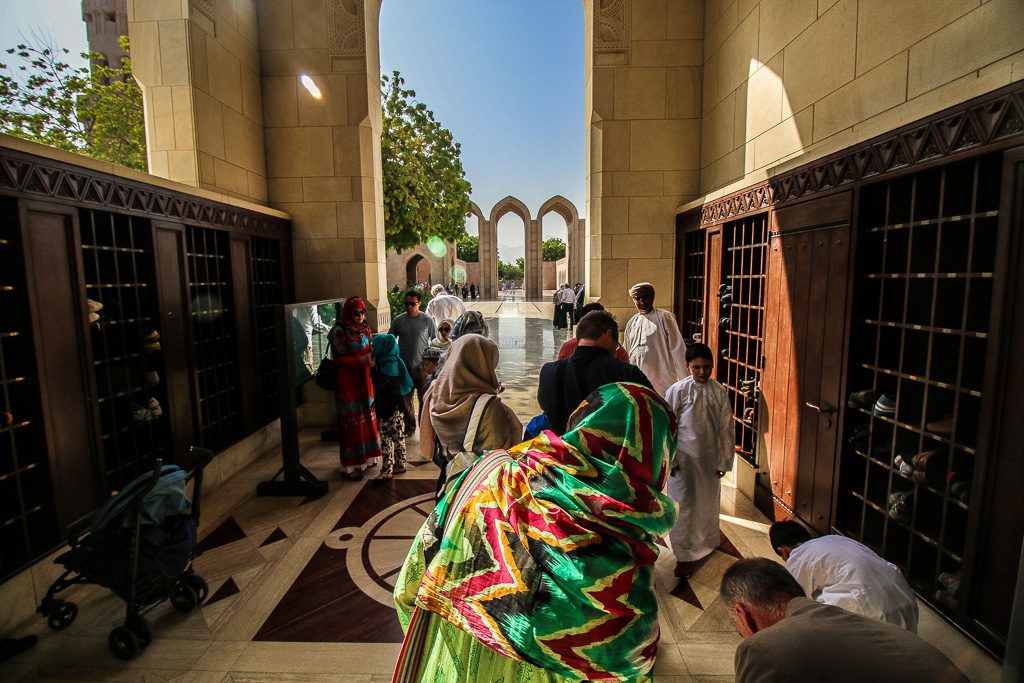 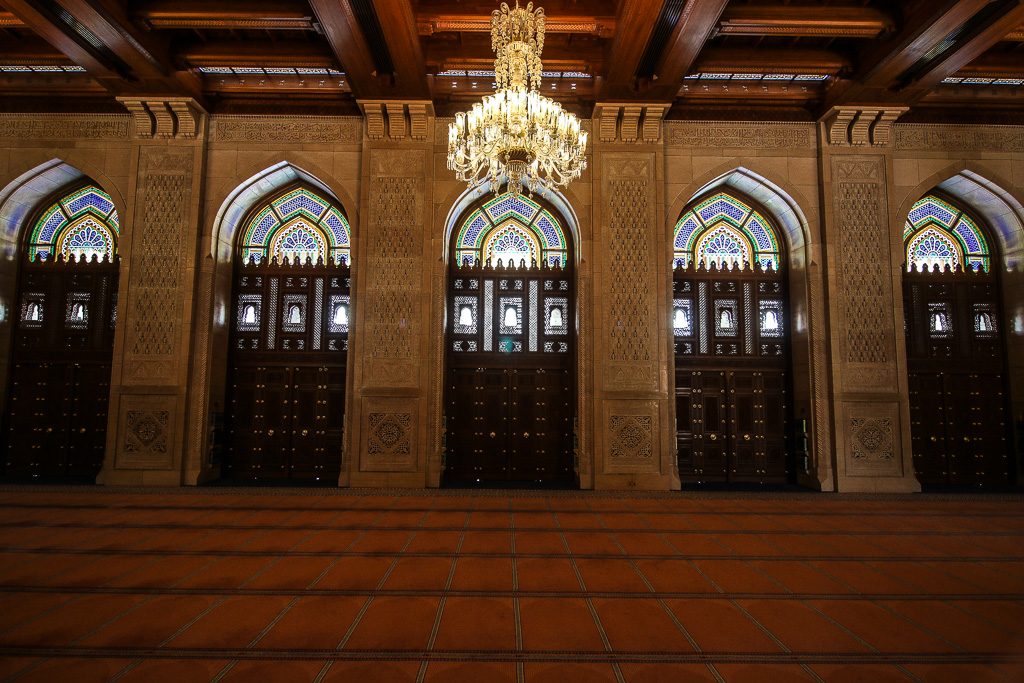 The women’s prayer room was decorated with intricately carved pillars and wooden ceilings, while a small chandelier illuminated the inside of the room.

The Women’s room has space for 750 people to prayer at any time, but the total capacity of the entire Sultan Qaboos Grand Mosque is 20,000 if all the available space is used. Most of that space, I would see, was in the men’s prayer hall.

Part of the 20,000 capacity is based on worshippers gathering in these surrounding courtyards as well as the individual prayer halls, but in the bright sunshine outside I couldn’t stand for long in the reflective open spaces.

I stuck instead to the sheltered passageways which run along the outside of the complex, and yet still offer beautiful views of the grand architecture from the shade. 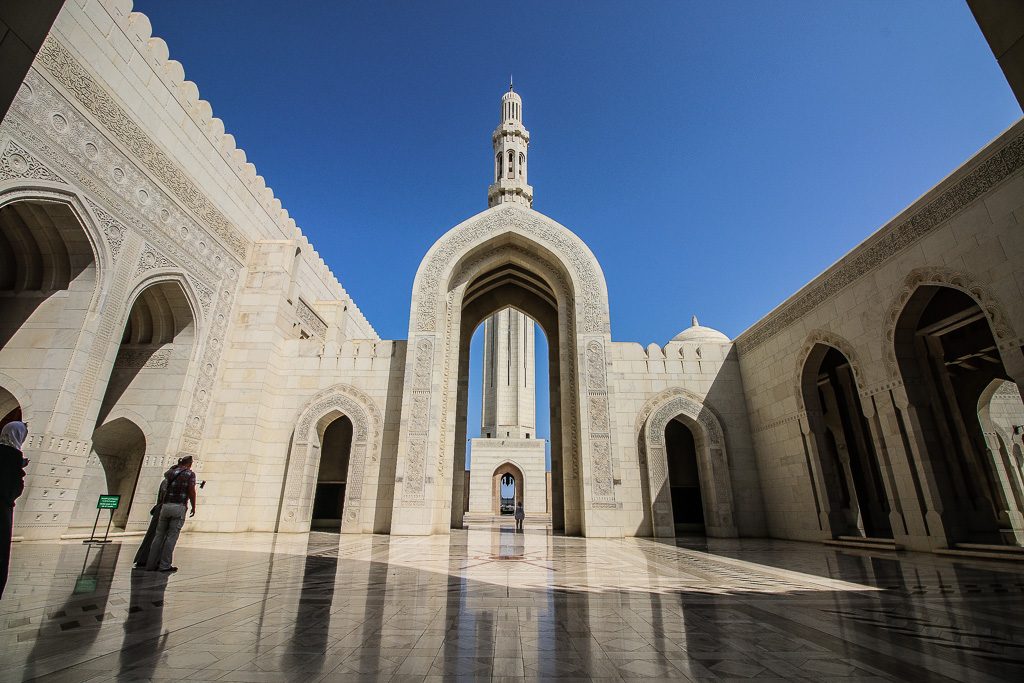 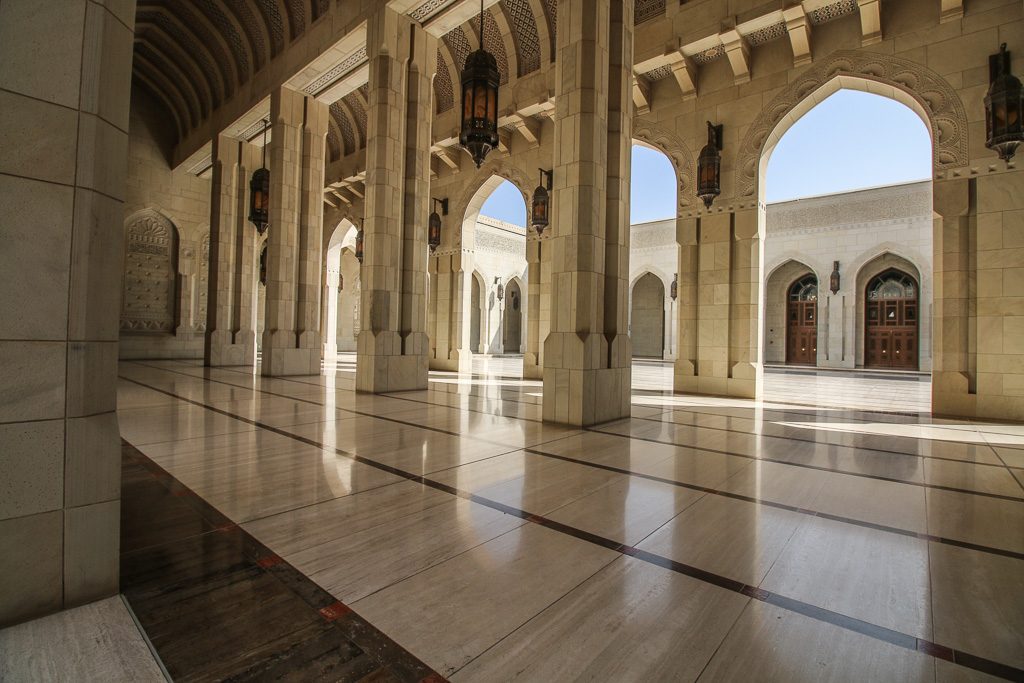 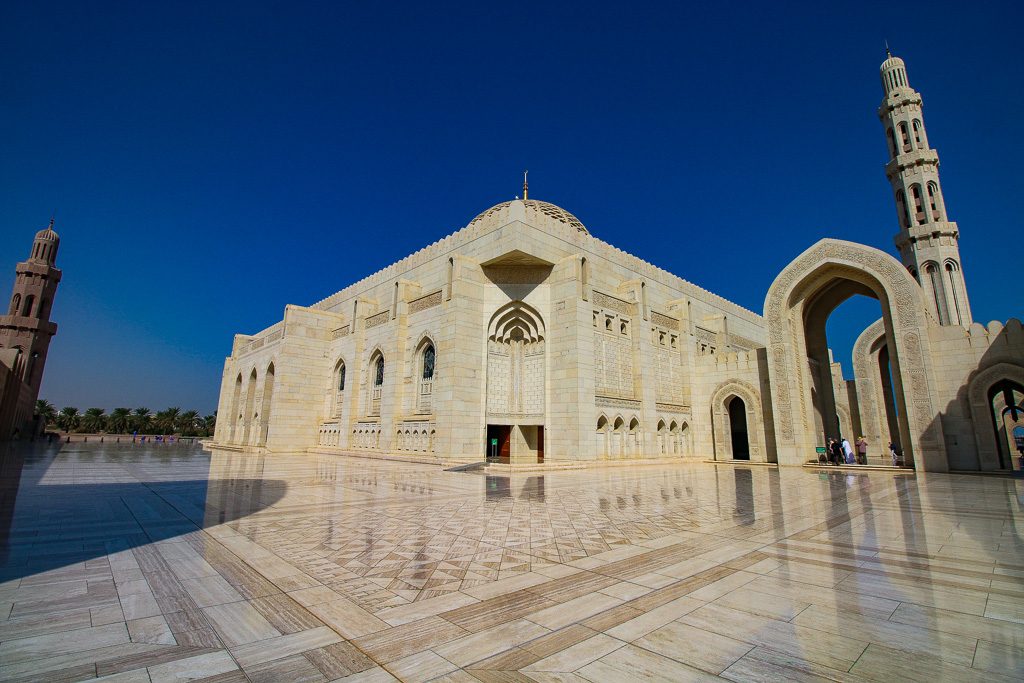 The huge dome in the centre of the complex marks the site of the men’s prayer hall. This huge building is much bigger than the women’s hall I’d just visited, being designed to accommodate 6500 worshippers at any one time.

The interior is lavishly decorated. A huge chandelier hangs from the ceiling and the floor is decorated with a Persian Rug so large it took 27 months to weave. 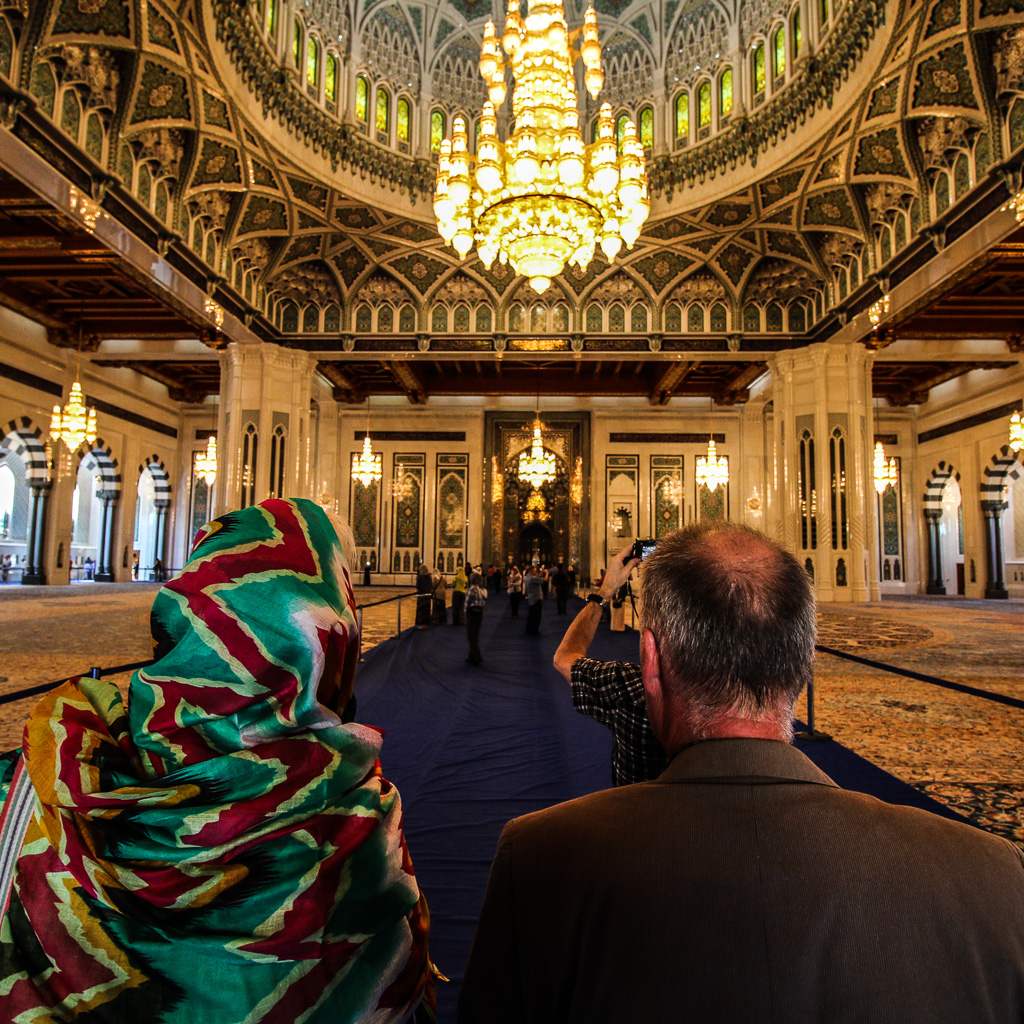 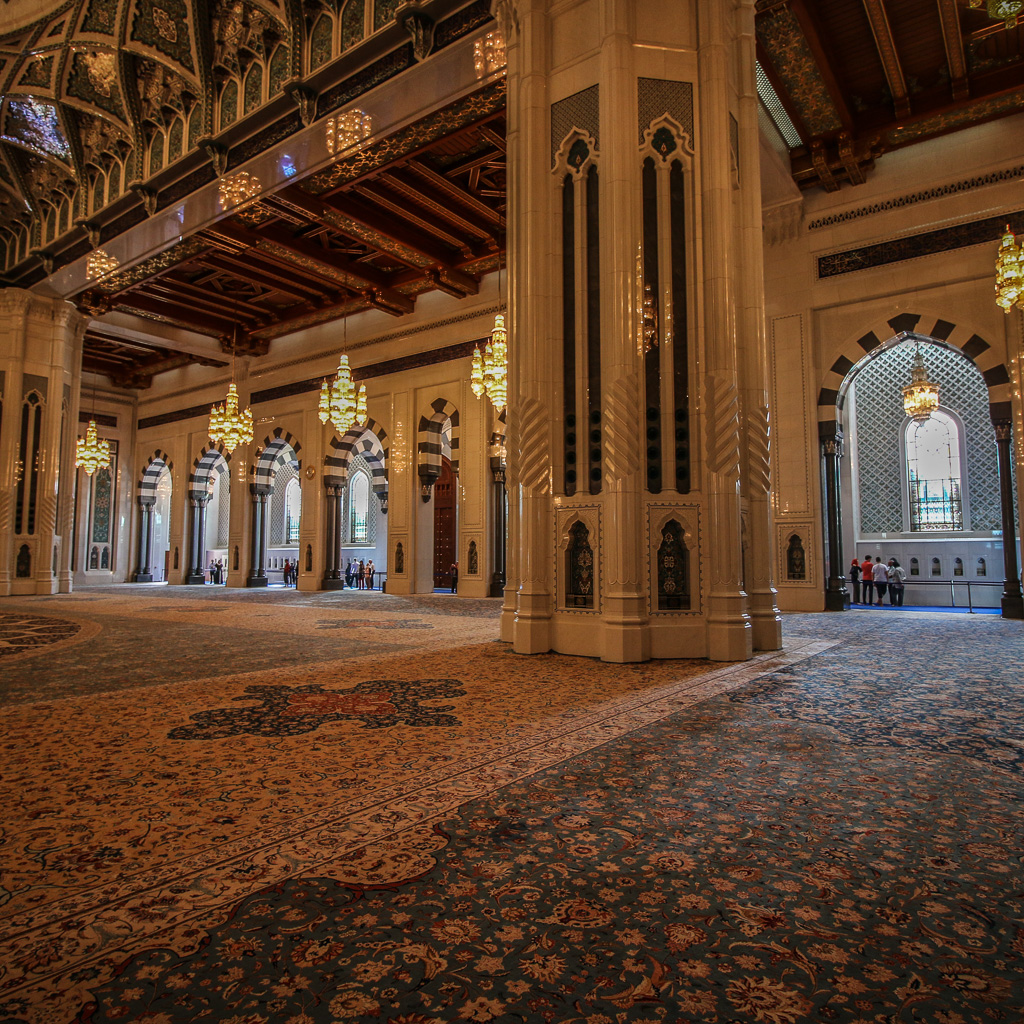 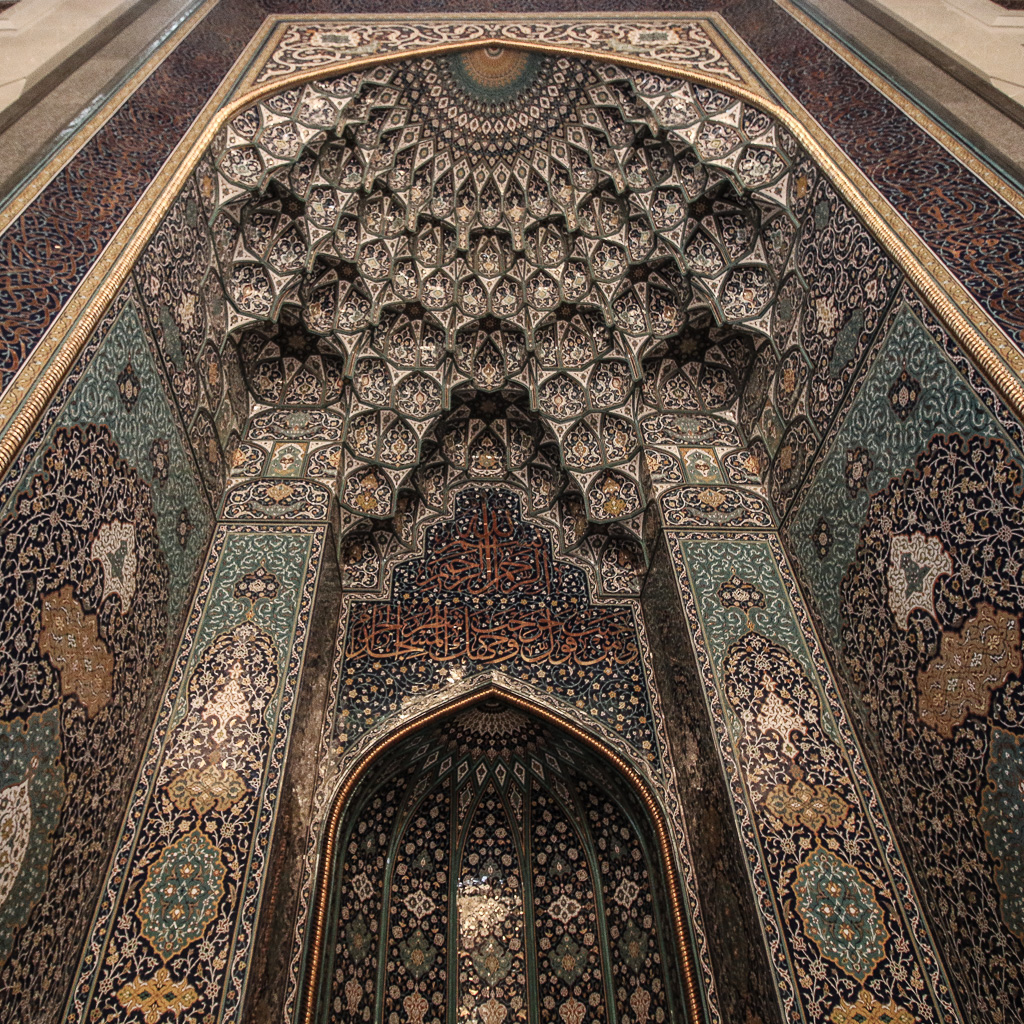 The men’s prayer hall is an opulent example of Islamic architecture, decoration and embellishment. It’s spacious, with influences visible from around the Middle East, Persia and the rest of the Islamic World.

This is the focal point of the entire complex, and as the mosque carries the name of the Sultan, and was commissioned by him for his people, you wouldn’t expect it to be any less opulent than it is.

The Minarets Of The Sultan Qaboos Grand Mosque

No mosque is complete without a minaret. This mosque has four. When I visited twenty years ago these towers were still being raised. Now they stand 45 metres tall, and form part of formidable skyline of the complex, reaching towards the skies and calling to prayer the people of Muscat. 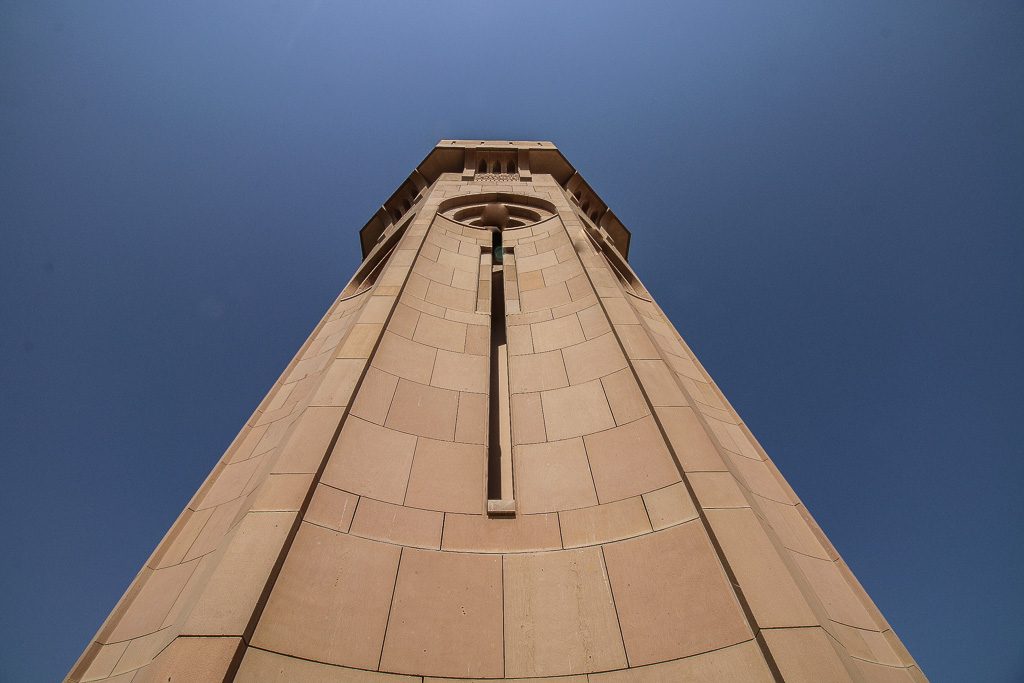 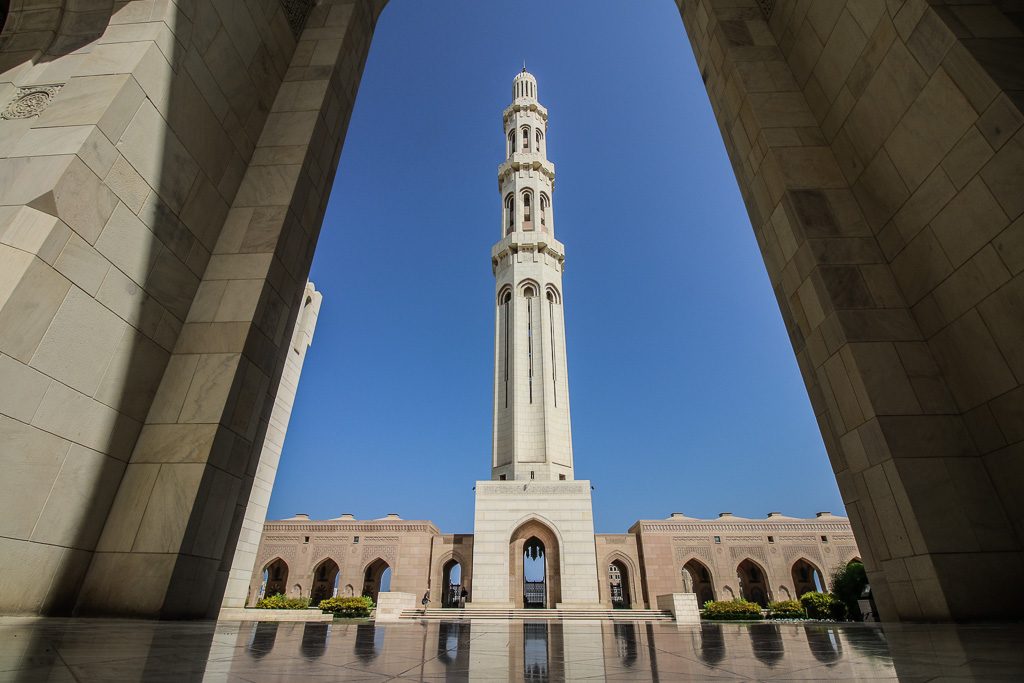 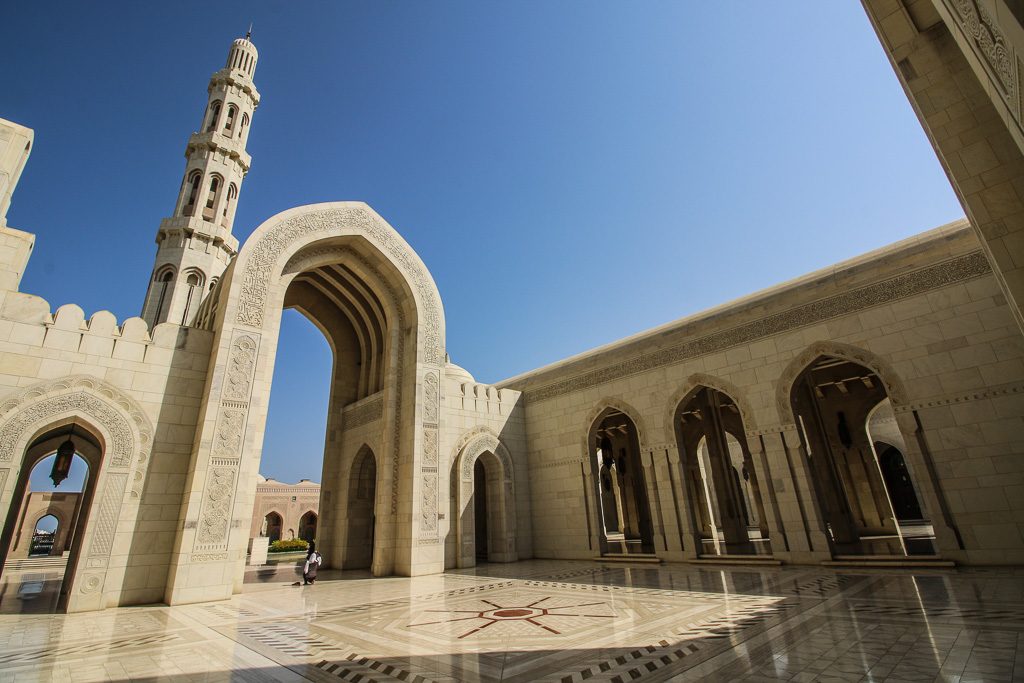 The Extravagance Of The Sultan Qaboos Grand Mosque

On exiting the mosque all three of us were surprised at how extravagant the entirety of the complex is. It’s a grand, grand design, a real achievement of Islamic design, architecture and ambition.

And of course, it’s a statement of extravagance from Oman’s long reigning monarch, Sultan Qaboos. This was a gift to his people, to his religion and to his capital city, and it’s something that will truly be part of his legacy. 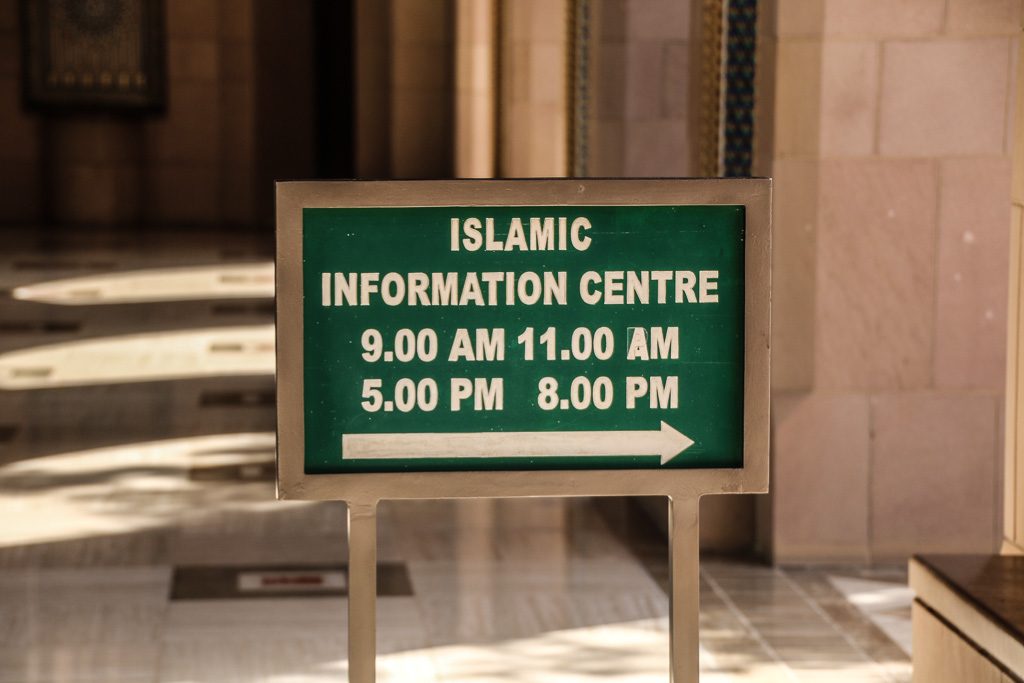 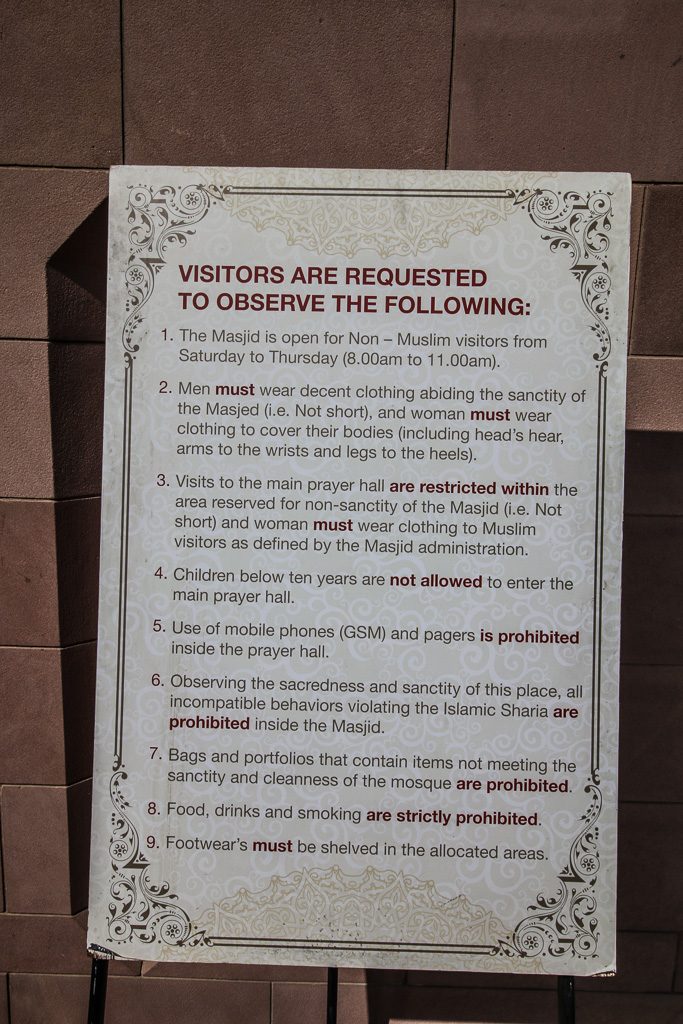 For more adventures from Oman, then why not have a read of my journey through the beautiful Muscat Souq. You can find that article HERE!