THINGS TO DO IN EXMOUTH WA 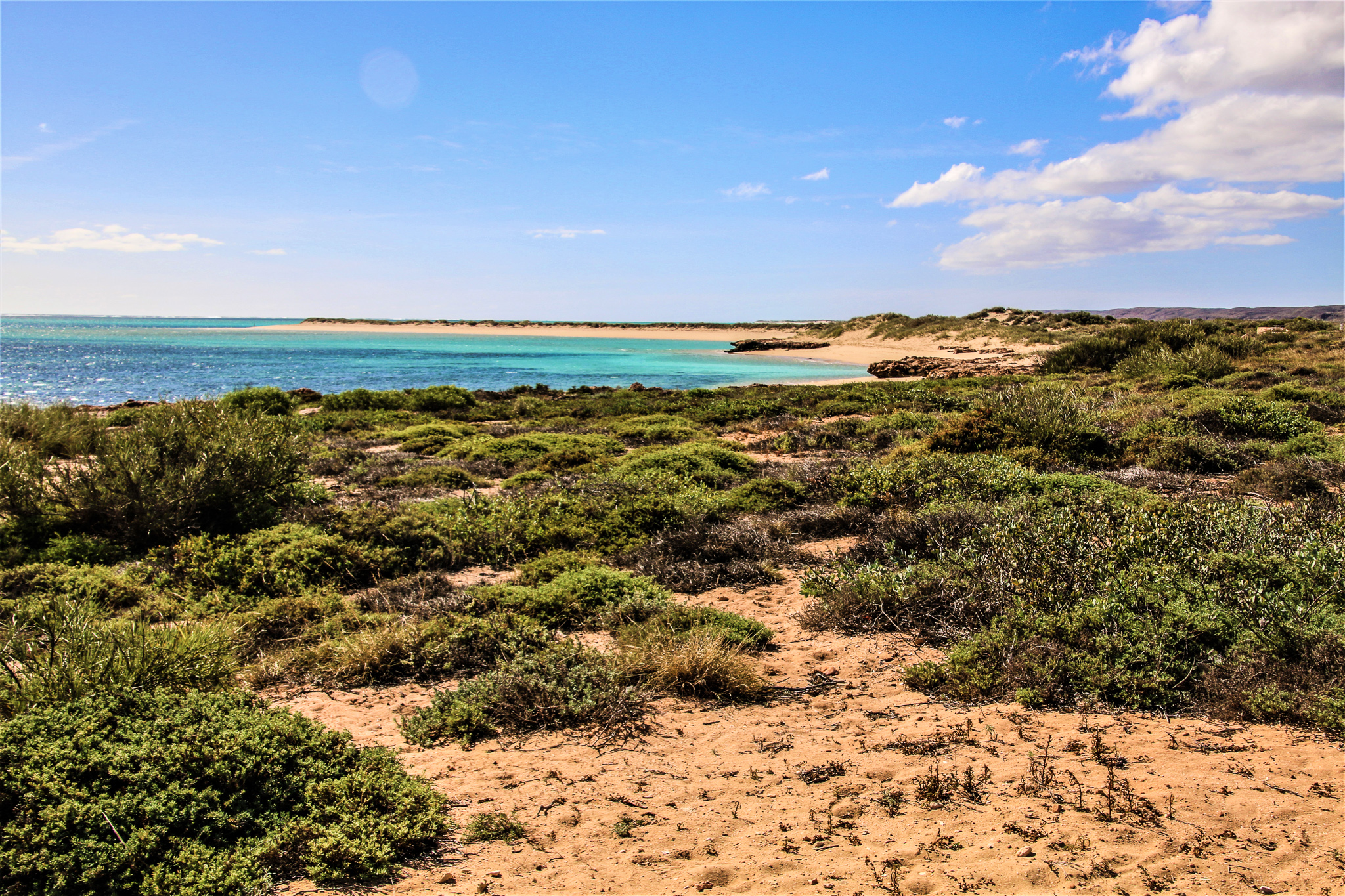 Located on the north-west coast of Western Australia, Exmouth is where the reef meets the range. There are a lot of great things to do in Exmouth WA because this is where you’ll find the Ningaloo Reef – one of the largest fringing reefs in the world – and the Cape Range National Park, an area of dusty canyons and creeks.

A wildly diverse area – particularly given its location in the vast emptiness of Western Australia – along the coast, you’ll find whale sharks, humpbacks and excellent snorkelling and diving.

Inland, you can cruise along river canyons, chill out at the bars in Exmouth WA and experience one of the state’s best outdoor destinations.

To inspire your trip, here are the best things to do in Exmouth WA.

Exmouth WA is a small town, with a resident population of just over 1000 people. In peak season though, when the whale sharks begin to arrive along the coast between May and September, the population swells as visitors and road trippers making their way north from Perth to Broome call into Exmouth to explore the Ningaloo Reef and the Cape Range National Park.

It’s a good 1200 kilometres from Perth to Exmouth, so you might want to call in at a few other destinations along the way if you are driving. There are a lot of things to do in Geraldton, which makes a good first stop, while Shark Bay will always be a popular place to visit on any itinerary heading north.

The farms and quirky space history of Carnarvon feature on may road trips from Perth to Exmouth, while you if you want to see the real Outback of Western Australia, a long detour inland from the coastal highway to the Kennedy Range or to the world’s largest rock, at Mount Augustus, is definitely in order.

Exmouth town is the perfect base, with caravan parks and hotels, and plenty of bars and restaurants – a least for such a small town – although be sure to book in advance in peak season between May and September, even if you’re camping.

The Best Things to do in Exmouth WA

Exploring the Ningaloo Reef is always the best thing to do in Exmouth WA. Forget Cairns and the Great Barrier Reef, because Ningaloo sees only a fraction of the visitors that the east coast’s much more famous reef does each year.

The Ningaloo Reef stretches for over 300 kilometres all the way from Exmouth in the north, to Quobba Station in the south, and the Ningaloo Coast forms an extensive UNESCO World Heritage Site.

Exmouth is the best place to visit the reef itself, as it begins right next to the coast. You can quite literally wade out into the water with your snorkel gear and start exploring this underwater world. The reef attracts all kinds of marine life, from turtles to sharks.

From May to September, whale sharks begin to appear along the Ningaloo Reef by Exmouth, as they make their long migration north to feeding grounds. There are few other places in the world where you have such a high chance of seeing whale sharks – not even the whale sharks of Donsol in the Philippines offer such a high rate of success – and nowhere else in the world can match Exmouth’s operators in terms of ethical and responsible tourism.

There are several companies in town offering whale shark tours in season, although it’s not exactly cheap, with prices starting from AUD 400 per person. Spotter planes in the skies overhead ensure that you’re going to see a whale shark if it’s there. You go out for the whole day, and if you’re in luck, you’ll be able to snorkel with the world’s largest fish.

Although one of the best things to do in Exmouth WA might be swimming with whale sharks, these aren’t the only large marine creatures to frequent the coast. Aside from the odd shark, the reef also attracts migratory whales like the humpback too.

Again, in season, you can join whale watching trips along the coast that set out in search of these large marine mammals, and there’s a high chance of success!

There’s an abundance of diving and snorkelling sites along the Ningaloo Coast, and many are just off the coast itself. The best snorkelling spots are found off the beaches of Cape Range National Park, on the west side of the peninsula.

You can walk off the beach or off the rocks into many of these sites, but just remember that the coastline does have one of the larges tidal differences in the world. Check-in at the local visitors centre to find out the best times to snorkel each day.

In Exmouth, there are also several dive operators who arrange Scuba trips further out onto the reef, although again, like whale shark watching, it’s not cheap.

The snorkelling and scuba diving in Exmouth WA is excellent, but it’s not for the inexperienced. Many sites involve drift diving or drift snorkelling, as the currents are fierce here.

One of the most accessible snorkelling sites in Exmouth is Turquoise Bay. The wide, blue bay is found in Cape Range National Park, and it looks really, really spectacular! It’s an easy enough place to spend a few hours relaxing on the white sands, but the snorkelling’s the real draw.

This is a drift snorkelling site, so you enter the water at the southern end of the bay, swim out just a few metres to the reef, and then let the current take you along. Get out at the end of the bay, of course, or you’ll end up way out to sea.

Oyster Stacks is an even better snorkelling spot than Turquoise Bay in my humble opinion. This is for experienced snorkellers and strong swimmers, and the only time you can snorkel here is at high tide. During low tide, the water is far too low, and you’ll literally be stepping on and destroying coral if you get in the water.

The coral stacks are covered in oysters, and there are all sorts of species of marine life feeding here. The current is strong again here, and it’s incredibly rocky, so watch out as you get dragged along the reef.

Exmouth’s tagline is this where the reef meets the range because a large part of the peninsula is protected as part of the Cape Range National Park, and those snorkelling beaches I’ve been talking about are all found within the national park itself.

The park is enormous, but there are two main areas. You have the coastal area, with the beaches and the majority of the camping sites – although these national park camping sites have limited spots and have to be booked on online in advance – and you also have the inland areas, where you’ll find the canyons, that form the range itself.

Yardie Creek is found at the southern end of Cape Range National Park, and it’s easily one of the best things to do in Exmouth WA. This long creek rises steeply from the coast to form a dramatic, high walled canyon.

You can hike along walking trails that along the edge, and it’s here that you might – if you are incredibly lucky – see a rare Rock Wallaby. If you’re not up for hiking in the fierce WA heat, then you can take a more casual boat cruise along the creek, which takes you upriver.

To be quite honest though, the hiking isn’t particularly intense, or long. It’s just a bit rocky, and the views down into the canyon are better than those along it. If you’ve got your own gear, you can also kayak or canoe along Yardie Creek. To get to Yardie Creek, you simply follow the aptly named Yardie Creek Road all the way from Exmouth, and past all the snorkelling beaches along the coast. The creek is quite literally at the end of the road.

Shothole Canyon is also found within Cape Range National Park, however, to reach this particular canyon, you’ll need to drive along a different road. Don’t take the coastal road, but head directly inland, after driving south from Exmouth town (towards the airport). You’ll see the signs and the road you need is again very aptly named as Shothole Canyon Road.

Shothole Canyon is four-wheel drive only, as it’s a rough road. You can drive along the base of the canyon for epic views, and there’s a short walking trail at the end. You’ll be able to see right over the canyon and across to the reef.

If you don’t have a four by four, then you can still tackle the gravel road that leads to Charles Knife Canyon. The aptly named road that you’re looking for here, again to the south of Exmouth and towards the airport, is the Charles Knife Road.

There’s a great walking trail here that leads to a lookout over the canyon, offering epic, sweeping views!

At the top of the peninsula – and not actually within the national park – you can find an excellent sunset point. Vlamingh Head Lighthouse is just a short drive from Exmouth, and it’s a great viewpoint to the north.

The lighthouse is named for Willem de Vlamingh, a Dutch cartographer and explorer who charted the coast of Western Australia in 1696 – a century before the British even decided to begin colonising the east coast of Australia.

Staircase to the Moon

One of the more unusual things to do in Exmouth WA is to see the otherworldly phenomenon that is the Staircase to the Moon. When the tides are right, and it’s a full moon, then there are certain areas along the coastline where the light of the full moon is reflected along mudflats, forming a strange stairway-like light show.

It’s a phenomenon that’s seen all along the north-west coast, although most travellers associate it with Broome, as here it’s more pronounced. You can check exact dates with the visitor’s centre, but the Staircase to the Moon generally occurs in Exmouth WA between March and October.

Map of Things to do in Exmouth WA

Where to travel to after Exmouth WA?

After exploring all the things to do in Exmouth WA, then it’s either a long trip back south to Perth, or you can carry on along the north-west coastal highway to explore some more of Western Australia’s remote destinations.

Many travellers carry on up to Broome, which is still a solid 1300 kilometres away – that’s actually further than heading back to Perth! Along the way though, you can either take the northerly road and stop off at Karratha, before continuing to Port Hedland, or you can take inland road to visit the gorges and swimming holes of Karijini National Park, which is one of the best national parks in the entire country.

Travelling north to see the best things to do in Exmouth WA? Sign up for Air BnB to book your accommodation using this link HERE and you’ll get £25 free credit towards your first booking!

HOW TO TRAVEL FROM PERTH TO EXMOUTH – Including Road Trip Itinerary!

How To Travel From Perth To Broome! The Definitive Travel Guide!