The Long Read: The Last Cigar Rollers of Suchitoto 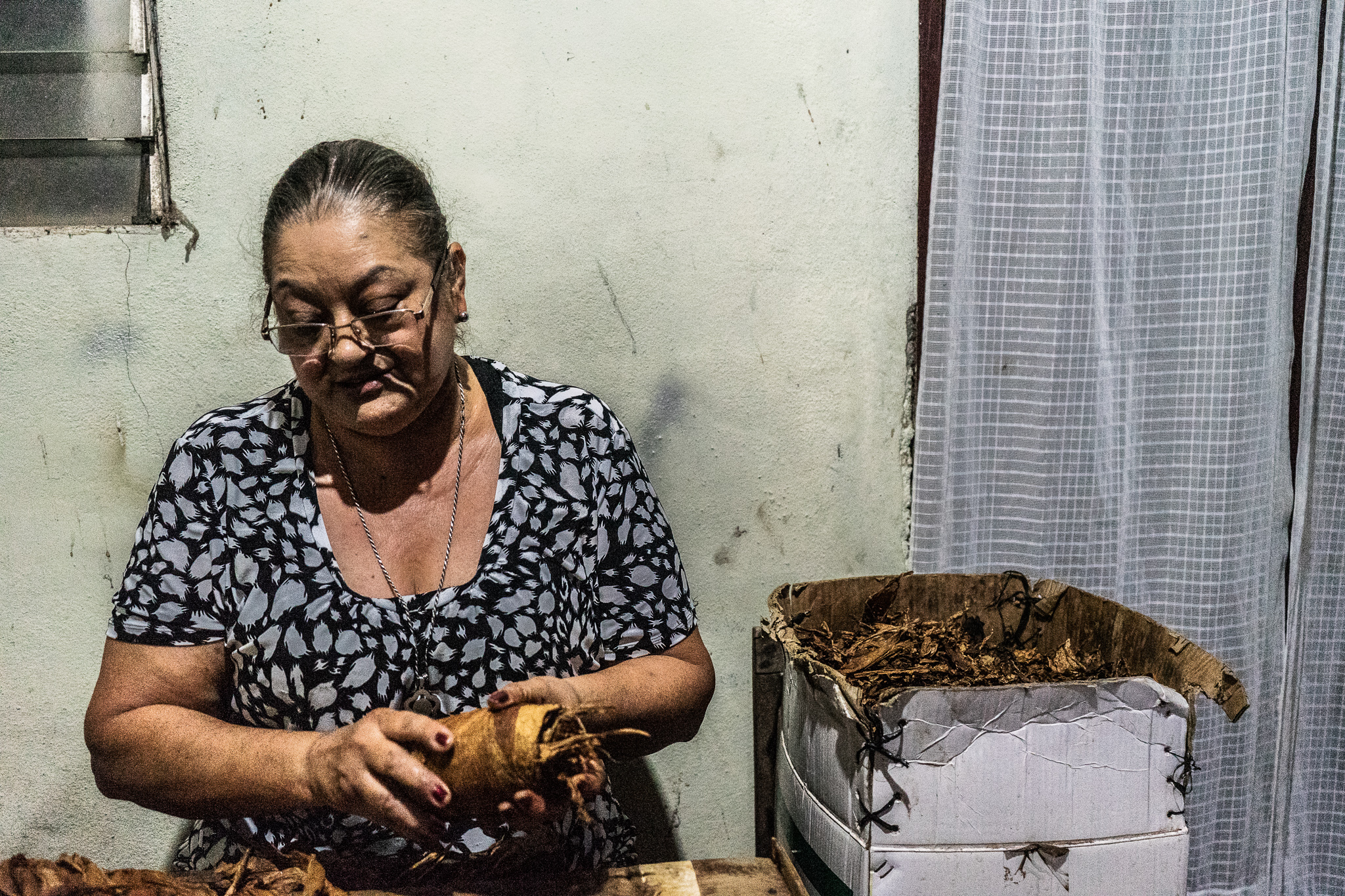 At 66 years old, Gladys is the youngest cigar roller in Suchitoto. Her story is one of guerilla fighters, war, and cigar rolling in El Salvador.

The Cigar Ladies are well known in Suchitoto, El Salvador.

The small town in the highlands north of the capital, San Salvador, is known for three things. Indigo, Guerilla Fighters, and Cigars.

During the Spanish colonial era, Suchitoto was a centre for indigo production. During the El Salvadoran Civil War, Suchitoto was a stronghold for guerillas fighting the government. And for the last century, the town’s cigars have been highly regarded across the country.

But today, cigar rolling is a dying industry. Few people still roll for the dwindling market, and all of them are women. The youngest of them is 66 years old. The oldest is 99.

They are the last Cigar Rollers of Suchitoto.

The Youngest Cigar Roller in Suchitoto

I’m welcomed into the courtyard of Gladys’ home in Suchitoto. She’s 66 years old, and on weekends, she churns out hundreds of cigars to be sold across the town.

She’s the youngest cigar roller in Suchitoto. Her Auntie, from whom she learnt the craft as a child, is 99 years old, and until very recently, she was rolling thousands of cigars each week.

But this isn’t just a story about cigars. Or a story about a dying craft. It’s more than this, because the lives of Suchitoto’s cigar rollers, and the craft they’ve practised for decades, is inextricably entwined with the El Salvadoran Civil War.

Theirs’ is a story of conflict, war, guerilla fighters and refugees. And Gladys was about to tell me everything.

The El Salvadoran Civil War broke out in 1979 in response to a military coup which disposed the government. Fighting began across the country as guerilla units formed, some fighting for democratic ideals, others for land reforms, and many more simply because they sought revolution in a poverty-stricken and corrupt country.

The guerilla movements would evolve into the FMLN, which by 1992, when the war ended, would control strongholds across El Salvador, before eventually being voted into power as a political party. One of those strongholds was Suchitoto, or at least, the surrounding villages and forests, where guerillas hid and fought with government forces.

It was a brutal time, marred by indiscriminate killings and the use of child soldiers on both sides of the conflict. While peace led to land reforms and more political freedoms, many El Salvadorans feel that little has changed in the almost three decades since the end of the civil war. Gang violence and killings are still endemic in El Salvador, and for many, it’s as dangerous a place to live today as it was during the war.

From Indigo to Cigars

“There was no gold or silver in El Salvador when the Spanish arrived”, explains Sal, a tour guide who’s guiding me to an old guerilla camp in the forests near Suchitoto. “So back in the colonial days they harvested indigo, because the Kingdom of Cuscatlan had been famous for its indigo production.”

In the forest, Sal shows me to an old indigo production centre, now surrounded by dense foliage as the trees reclaim it.

“The Spanish decided to industrialise Indigo production, and it became the main industry from the 1600s onwards”, Sal goes on to explain.

The Indigo plant grew in abundance here, but production would all but end in the 19th century when synthetic colourings replaced indigo dyes.

The indigo plant became worthless, so instead, many local women began rolling cigars to earn a living.

In the forest, Sal remarks that the concrete we are standing over, while once used for indigo production, became the entrance to a guerilla camp during the Civil War.

“The forest was all fields before the war”, Sal tells me. “But the workers joined the FLMN and the trees soon grew back and began to hide them.”

Those workers had been the market for Suchitoto’s cigar business. After the end of the indigo industry, the women would roll cigars and sell them to the workers who would take them out to the fields with them.

Cigar rolling soon became big business in Suchitoto through the 20th century, and the hand-rolled cigars soon spread across the country.

It was those workers smoking the cigars though, and earning just a pittance a day for harvesting crops, that would eventually rise up in 1979.

But despite the war, they would still want their cigars. As did the government soldiers too.

“Then the War Began”

Later that day, I’m in Gladys’ courtyard where she’s sat at a wooden table rolling cigars into shape.

It’s 5pm on a Sunday and Gladys is still here rolling. “I roll 500 cigars on Saturdays, and then 500 more on Sundays”, she says in Spanish. The rest of the week, she lives and works in San Salvador.

“Cigar rolling is a family tradition”, says Gladys. “I learnt when I was 6 year years old, from my Aunt. I’ve been rolling for 60 years now!”

Her Aunt is the most famous cigar roller in Suchitoto. Nina Toyita is now 99 years old, and even into her nineties she was rolling 800 cigars a day. Her siblings all lived to be over 100 years old, and perhaps that’s because despite the family business being cigar rolling, none of the family ever actually smoked.

Nina Toyita learnt from her mother and aunts how to roll cigars when she was younger, and they would supply all the workers in the fields with their daily smokes. Nina Toyita went on to run the family cigar business. As she was the youngest, she was expected to stay home and help her parents, and that meant learning to roll cigars. Although she never married, she did adopt a son from one of the families who worked in the fields.

Gladys’ path would be different, but cigars still played an important role in her story. “When I was 16 I went to study journalism in San Salvador”, Gladys says as she continues her story. “But I would always come back on the weekends to roll cigars for the family business. Then the war began”.

How to Hand Roll Cigars

Gladys demonstrates how she rolls cigars, with the same techniques she’s been using for 60 years. That technique hasn’t changed much since the ladies in Suchitoto first began rolling in the 1900s.

These days tobacco isn’t grown in Suchitoto. Instead, it’s usually sourced from the market in San Salvador, and Gladys will bring it with her when she returns on the weekends to her hometown.

She cuts the tobacco leaves and grinds up the spines. The best leaves she saves for the outside, while the ones with insect bites and holes she uses for the inner layer. She spreads the leaves flat on the table and adds the ground tobacco to the centre. Then she rolls, tightens the roll, and then trims with a pair of scissors.

“My Aunt never knew that I was with the Guerillas”

While she was studying journalism during the week and rolling cigars on weekends, Gladys was also working covertly for an underground newspaper during the El Salvadoran Civil War.

She says that thanks to the cigar business, “I knew all the soldiers at the checkpoints, and all the guerillas too. I could come and go as I pleased in Suchitoto”.

Her freedom of travel, and journalistic skills, helped Gladys to document war crimes, and much of her efforts went into the underground newspaper.

“And all through the war, my Aunt never knew that I was with the Guerillas”, Gladys adds with a sly smile. “Even today, she doesn’t know.”

A Place of Refuge

“My Aunt stayed neutral during the war”, Gladys explains of Nina Toyota. “But that doesn’t mean that she didn’t help those in need.”

“On Christmas Eve in 1984, she opened the doors of her home to refugees on the streets”, Gladys says as she gestures around the wide courtyard we are in. “We let in over 100 people, peasants who had lost their homes in the fighting and were sleeping rough”.

Sleeping rough in Suchitoto during the war could be a death sentence, as the armed forces would indiscriminately arrest or kill anyone they thought could be a guerilla.

“I was sent out to buy Christmas presents for everyone”, Gladys tells me. “My Aunt said not to buy any toy guns”.

“Many years later a man turned up at our door. He was here in 1984. He thanked us, and said that he would have died on the streets if he hadn’t been let inside”, Gladys says. “After that night, he and his family escaped to America, and now they are doing well”.

Both sides in the war wanted cigars, and the cigar rolling house became a safe haven from the conflict outside.

The End of an Era

As Gladys is recounting her take of the war, Nina Toyita, at 99 years old, is wheeled into the courtyard too.

Gladys laughs. “She still won’t know I was in the guerillas, she always forgets to put her hearing aid in!”

The last generation of Suchioto’s cigar Rollers are all in the same courtyard, recounting life stories of tobacco and war. The cigars that Gladys has rolled today, will only fetch a paltry 5 US Dollars for every 25 sold. It’s just not a profitable business anymore.

Suchitoto tobacco was highly prized for many years, so much so that after the war, Marlboro moved in and started a cigarette factory. Indirectly, this caused the decline of cigar smoking, as cigarettes became cheaper.

But times change, and in terms of health, this one can’t be complained about. “The younger generation don’t smoke so much anymore”, Sala, who had been guiding me through Suchitoto says.

The Marlboro factory had to move operations to Honduras, and then when cigarettes became more expensive, people stopped smoking. The cigar business didn’t really pick up again either, and the cigars that Gladys has rolled will mostly be sold to the older farmers who still enjoy them.

Gladys will be the last of her generation to roll the cigars, and at 66 years old, she will remain the youngest cigar roller in Suchitoto.

Travelling to El Salvador? Sign up for Air BnB to book your accommodation using this link HERE and you’ll get £25 free credit towards your first booking!

Hit the Road With the Best Scenic Drives Around Nashville