The Best Masbate Tourist Spots – And How And Why To Travel There! 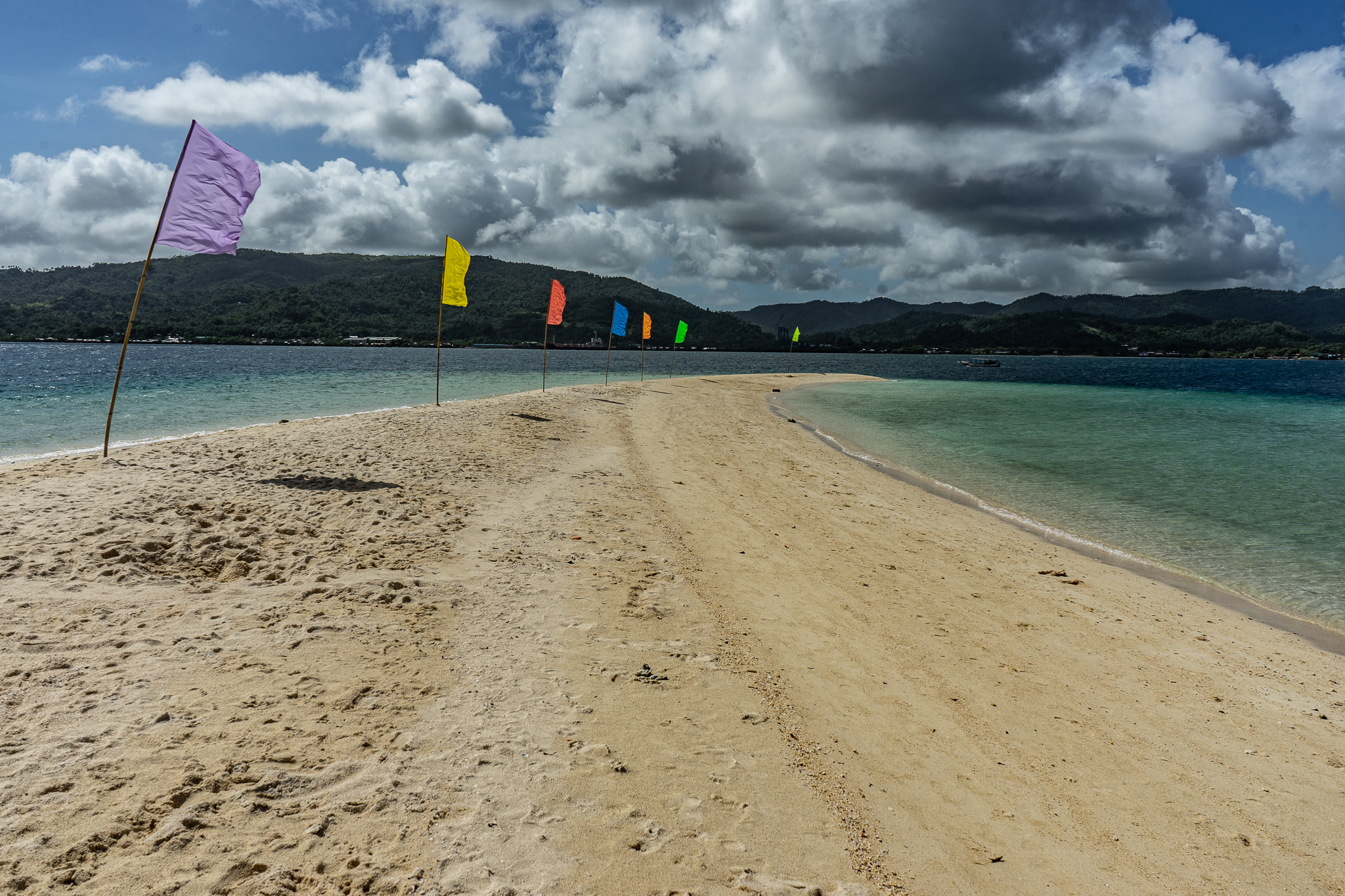 Masbate is an island that will rarely feature on a list of the top destinations to visit in the Philippines, but that’s because few travellers from outside of the Filipino archipelago make it here. There are a lot of great Masbate tourist spots to check out though, which just means there’s more to go round for those who venture to this off the beaten track province.

Masbate is the wild west of the Philippines, quite literally, because this is cattle and rodeo country. The island is known for its huge swathes of farmland, but more than this, you can find coral reefs, white sandbars and intriguing culture.

Located across the strait from southern Luzon, you might even find whale sharks out in the water at certain times of the year. If you are looking for an under-visited and underrated island to explore, then checking out the Masbate tourist spots is an unbeatable idea.

But where exactly is Masbate? Unless you’re actually from the Philippines, then the chances are that you’ve probably heard very little about any of the Masbate tourist spots that there are to visit, and the chances are you’ll be hard pushed to place it on a map.

Masbate Province is located next to the southern edge of Luzon, close to Legazpi City. It’s south of Manila and north of Cebu. It’s very centrally located within the archipelago and comprises three major islands. The largest island is Masbate, which is the site of the provincial capital, Masbate City, the main base from which to explore. The two other large islands in the province are Ticao and Burias.

Scroll to the end of the article for Masbate travel advice!

A Brief History of Masbate

Masbate has been inhabited by humans for thousands of years, and it’s the site of some of the oldest human settlements in the Philippines. There were thriving Filipino communities on the islands here when the Spanish arrived in the 1540s and began to colonise the region.

Masbate became integral to trade in the Spanish Empire, as the gold galleons that travelled from Spanish America across the Pacific would stop off on the coast of Ticao Island as they made their way to Manila. There were important lighthouses and forts on the islands too to protect this important route.

In recent history, Masbate has become known for its cowboy culture, as the island is one of the largest producers of beef in the Philippines, and is known for its annual Rodeo that celebrates this culture. While not yet fully on the tourist map – at least amongst international visitors – Masbate has the potential to be a much bigger destination for travellers!

The province is relatively untouched when it comes to tourism, but there are some excellent Masbate tourist spots to experience. There are sandbars to rival any other tropical location in the Philippines – and without the crowds – while there are cattle ranches, spectacular countryside and more to see.

The highlight of any trip to Masbate is undoubtedly visiting the Buntod Reef Marine Sanctuary. From the city, take a short tricycle ride to the small boat port on the edge of Masbate (not the main ferry terminal!), from where it’s a ten-minute ride across the water to the sanctuary.

Buntod Reef Marine Sanctuary encompasses a long, white sandbar that’s surrounded by mangroves and coral. You can snorkel off the sand and into the clear water, explore the mangroves or just kick back at the restaurant and enjoy a few cold drinks. As far as Filipino sandbars go – and there are a lot of them! – this is one of the best that I’ve seen in my travels around the country, comparable even to White Island in Camiguin.

Masbate City is rather small, and it’s easy to walk around and to see the sights on offer. There’s not a huge amount in the city itself, but you can check out the local markets, try some street food and meet the locals.

You’ll also be able to see the Rodeo culture, as you’ll pass by the local Rodeo stadium, and see the statues dedicated to the Masbate cowboys and ranchers.

An unusual ‘attraction’, yet the most captivating of the Masbate tourist spots, is Fazenda de Esperanza. This is the Farm of Hope, a working farm in the countryside that’s also a rehabilitation centre for addicts.

Run by a lovely group of nuns, the farm offers addicts and criminals a second chance, it offers them hope. I toured through the grounds with a few of the workers, who were happy to show me their homes, gave me lunch and told me their stories. It’s a beautiful place to visit too, and an opportunity to see rural Masbate. You can take a Jeepney here, or you can hire a Habal-Habal motorcycle driver for around 500 PHP there and back depending on your haggling skills.

Masbate is all about the ranches, so you’ll want to visit a working cattle farm when you are on the island to see firsthand how many of the locals make their living. Sese Brahmans Ranch is open to tourists, and you can tour through their facilities and learn more about the work that’s done here.

You can also go horse riding, learn about the cowboy culture of Masbate and enjoy the spectacular, green scenery. The ranches of Masbate are far removed from the beaches that most people associate with the Philippines, but you’ll soon realise that the countryside here is equally as spectacular.

If you’re interested in seeing more of the cowboy culture, then visit Masbate City in April to see the local Rodeo Festival. This annual celebration of Masbate’s unique culture sees several days of events, mainly held in the big rodeo stadium in the city.

There are competitions, roundups, steak cooking contests and plenty of eating and drinking throughout the festivities. It gets busy though, so book your accommodation in advance if you’re visiting for the rodeo!

Bituon Beach is located south-east of Masbate City and makes for a great day trip. This is one of the best beaches on the island, and you’ll even find a great beach resort here if you’re looking to escape the city for a few nights, and stay in a peaceful location.

Catch a Jeepney or hire some transport to get down here from Masbate City.

Ticao Island is a half-hour ferry ride away from Masbate City and is the second largest island in the province. Ticao sees fewer visitors than Masbate, but there is some beautiful scenery to discover here.

Ticao Island Resort is a good place to base yourself, with rustic beachside accommodation. You can do nothing at all on Ticao, or you go island hopping, snorkelling, diving, hiking or horse riding.

In the strait between Luzon and Ticao Island, large numbers of whale sharks appear between November and April when the waters are full of plankton and algae. Donsol on the Luzon coast is the most popular place for spotting the whale sharks, and you can easily get here from Masbate City.

Lots of the dive and snorkelling sites, where you might see the whale sharks, are closer to Ticao Island though, and from here you can head out in search of the world’s largest fish.

How to Travel to Masbate

Masbate City is the hub for the region and the best base for visiting all the Masbate tourist spots. Travelling here is relatively easy too, with great connections to the Philippines’ main cities and to the surrounding islands.

There’s a small airport in Masbate City, with daily flights to Manila on CebGo. This flight, however, can be relatively expensive, especially if you are flying at short notice. I flew into and out of Legazpi City airport, a ferry and bus ride away from Masbate in southern Luzon, and found prices to be almost half, with many more departures each day too.

Travelling to Masbate from south Luzon is fairly convenient too. If you arrive in Legazpi, then take the regular express vans from the departure point by the SM City Mall in the centre to the port of Pilar. A tricycle from the airport will cost no more than 50 PHP. The journey to Pilar should take an hour and will cost just under 100 PHP per person.

From Pilar, there are several fast ferries departing every day to Masbate City. These cost 540 PHP each way, plus a 15 PHP terminal fee. Journey time is 2 hours, with departures from Pilar to Masbate City at 8 am, 12 pm and 15.30 pm. The return ferries from Masbate City to Pilar depart at 4.30 am, 8.30am and 12 pm. This gives you enough time to fly into Legazpi City and then make your way across to Masbate.

Another alternative route is to travel via Ticao Island, where you can stop off for a few days to explore this even more off the beaten track part of the province. Again, make your way to Pilar, but this time catch the ferry across to Monreal on Ticao Island. From Ticao Island, you can catch a ferry to Masbate City from the port of Lagundi.

There are also long-distance bus routes from Cebu and Manila, which use the RoRo (Roll on, Roll off) ferries to bring you almost directly to Masbate City. It’s a long journey.

Getting around Masbate City, there are plenty of tricycles you can jump in, and fares won’t cost more than 50 PHP for even the longest journeys. Across the island, you can either rent a motorbike, hire a motorcycle driver (Habal-Habal) for the day, or jump on the jeepneys.

The Best Time of Year to Visit Masbate

Masbate experiences hot weather throughout the year, but the best time to visit is in the dry season when you can expect clear skies and calm waters. The dry season generally runs from November through to April and also coincides with the whale shark season in Donsol. If you are interested in seeing the Rodeo Festival, then it’s usually held in Masbate City in the first or second week of April.

The wet season, from May to October, can be an unpredictable time of year to visit the Masbate tourist spots, and you can expect plenty of rain. There’s also the chance of typhoons and huge storms, which can cause severe travel delays and which have in the past even forced evacuations.

The Whale Sharks of Donsol