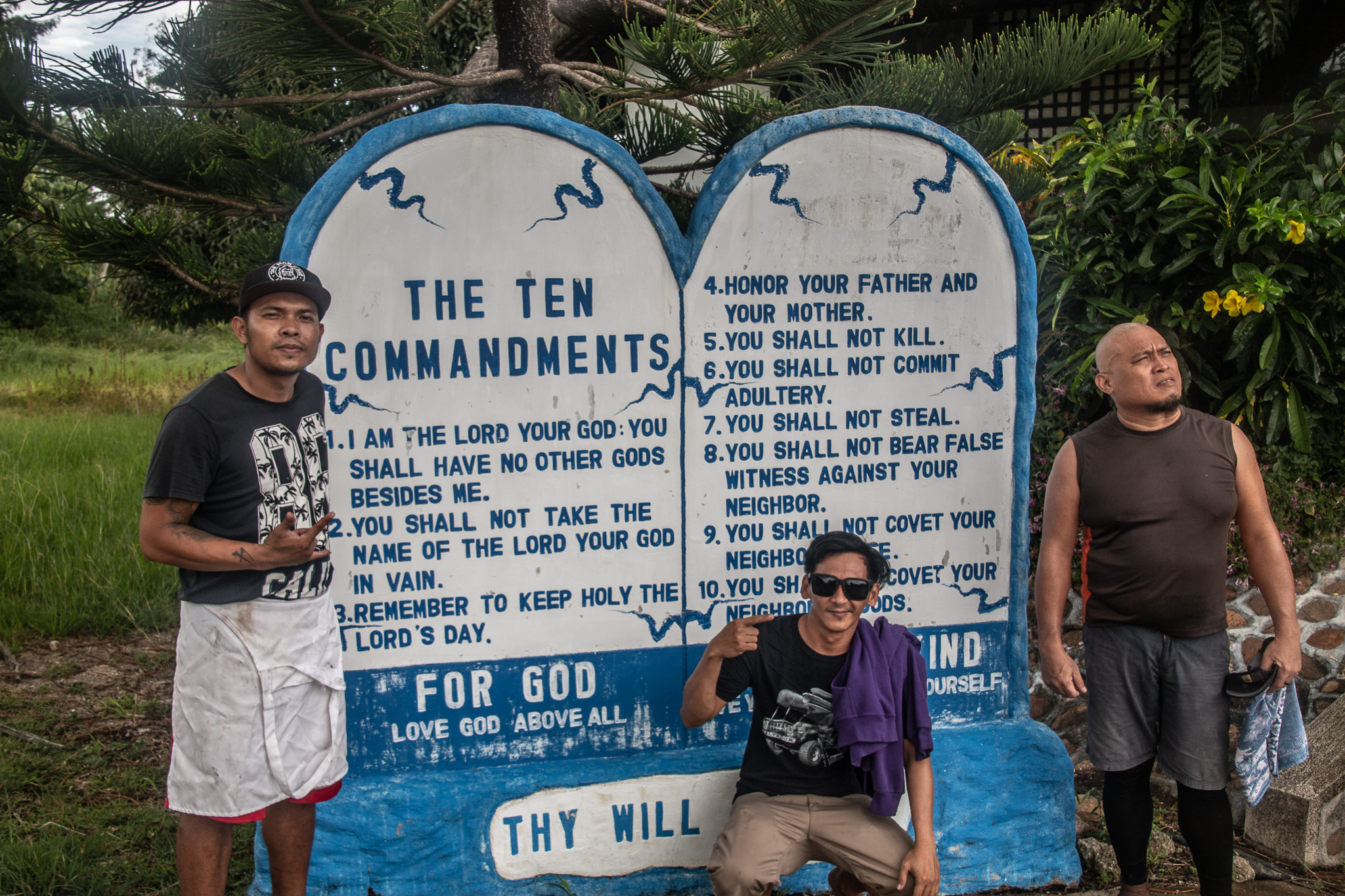 “My name’s Herman, but I’m not German”, jokes a young guy in dark shades as he welcomes me onto the Fazenda de Esperanza farm outside of Masbate City in the Philippines.

Herman has only just arrived on the farm. He’s only been here for a week, but Sister Rita invites him to show me around his new home. “Keep an eye on him for me though”, she says loudly enough for Herman to hear but giving me a sly wink, “Herman’s not allowed to leave Fazenda. Not for another year!”

Herman, just in his twenties, like the rest of Fazenda de Esperanza’s workers is a former drug addict, and he’s come to this farm in the Masbate countryside to spend the next year in rehab, and to hopefully find a new start at the end of it all.

Esperanza is Portuguese for ‘Hope’, Sister Rita had explained to me when I arrived at the farm. She’s from Brazil, as is the concept of Fazenda de Esperanza, which began in her home country in the 1980s. She’s been living here on the farm for four years and together with two other nuns and a few volunteers, they help to organise and run the rehabilitation centre.

Through work and community, former drug addicts, recovering alcoholics or those who have seen the inside of a prison cell too many times are given a stable environment in which to recover and to develop a new sense of self-worth and identity in the world.

The concept has spread around the globe to more than 80 locations, run by volunteers and nuns and welcoming in thousands of troubled people every year.

Here in the Philippines, where addicts are routinely thrown aside in the war on drugs, Fazenda de Esperanza offers a rare glimmer of hope indeed.

“We are all Drug Addicts or Alcoholics”

“We are all drug addicts or alcoholics”, says Herman rather chirpily as he shows me from the farmhouse and into the nearby milk bottling area.

Masbate, a little-known island between South Luzon and Cebu is called the ‘Rodeo Capital of the Philippines’. Much of the land is devoted to farms and ranches, with the locals priding themselves on their mustering and cattle rearing prowess. Although none of the island’s other farms and ranches run by nuns or staffed by former drug addicts and alcoholics, Fazenda de Esperanza still keeps hundreds of cows and fields full of produce in the same spirit as the rest of Masbate.

Those in rehab wake up 4am to first prayer in the chapel, before breakfasting and then milking the cows. That milk is then bottled, while some is turned into milkshakes, which I’m told is a real hit in the nearby villages.

Honesto Zapata is in charge of the milk pasteurisation process. He tells me how he’s been here on and off since 2009. “My wife left me because of my addictions”, he says, “But now I live here most of the time on the farm”.

Honesto walks me around the workplace, showing how they turn some of the milk into chocolate milk or add yams to create a vivid purple milkshake. Much of the milk is sold to be turned into Caramelados, a sweet local favourite that you can find for sale across Masbate.

For Honesto, the work on the farm, the help from the volunteers and the sense of community have given him a purpose in life, and despite the fact he long ago completed his one year of rehabilitation, he has been able to return indefinitely whenever he needs to recuperate again.

I leave Honesto to his work, and as Herman shows me around the extensive grounds of Fazenda de Esperanza, we are joined by two others – Johnmark and Paul Dublin – who are keen to help guide me around the farm.

Johnmark and Paul Dublin introduce themselves as ‘Ex’s’, the term they use on the farm for someone who has completed their one year of rehabilitation. Many of them, like Honesto in the milk shed and Johnmark and Paul Dublin, end up returning, either out of choice or necessity. Whichever the reason, they are welcomed back.

Both Johnmark and Paul Dublin are honest and open about their darker pasts and are happy to tell me their stories as we wander through the fields, sticks in hand to keep away snakes in the long grass.

Mark, like me, is 28 years old. “I was in prison three times before I came to the farm”, he tells me. “I completed my rehab but I have decided to come back to help out the others”, he says while gesturing towards newly arrived Herman. Mark has a wife and kids in Cebu and a job when he is home. He’s luckier than most, and he will be going back to see his family for Christmas, whereas many of the others will be staying here on the farm.

I ask Johnmark why he still returns all the way to Masbate from Cebu to volunteer. “You know Esperanza is Portuguese for hope?” he asks me back. “When I can, I like to give back. Because I was fortunate enough to be helped too”.

Paul Dublin, a big, smiling, 45-year-old, also struggled with his own problems before he arrived on the farm. “I was a drug addict”, he tells me, honestly. “Now I am an Ex”, he says with a sense of visible pride in his achievements. Paul Dublin has also volunteered to come back and help out and happily explains how the farm is almost entirely self-sufficient.

He shows me through the vegetable patch, pointing out the carrots personally planted by himself and only half joking to watch out for venomous cobras.

Everyone working here has been in prison or struggled with addictions, and I’m overwhelmed by the honesty I’m shown. They have no qualms opening up to me, a complete stranger, about their past conflictions.

Johnmark waves across at the cows in the fields and tells me, ”We have exactly 243 hectares and 385 cows”.

Paul Dublin laughs and in reply says, “Well, there used to be 385. But now we are having one for lunch”.

Lunch With A Motley Crew

He’s not joking about the lunch either, but after being seeing how friendly and welcoming this motley group of offenders has been, I’m hardly surprised when they invite me in to eat with them.

I’m given a whistlestop tour of the makeshift, outdoor gym, the chapel, and their dormitories before we sit down with everyone who’s not currently working to have lunch.

True to form, the main dish is beef.

Before we eat, the table says Grace, because for most of those on the farm religion plays a huge role in daily life. Despite not being religious myself, I can understand how – especially in the overtly religious landscape of the Philippines – it lends structure and some purpose to their routine, and perhaps, something more for a lost soul to believe in.

Over a lunch of rice, beef and chicken, I meet a few more of the characters from Fazenda de Esperanza.

Miguel serves up the food. He’s new here, still in his first few months, but already is looking forward to starting afresh when he finishes his year of rehabilitation.

Johnmark outlandishly introduces the oldest man there, Bong, as a sex addict. Everyone laughs. Bong is an Ex too, a tricycle driver from Masbate City who is just here for the day. He returns all the time to see his friends and just to hang out when he can.

After lunch and some goodbyes, I leave everyone to get on with their jobs across the farm while I travel back to Masbate City, passing farmland and ranches along the way.

The next day I bump into Bong in Masbate City. He shows me the local farm shop by the cathedral, where some of the produce from Fazenda de Esperanza is sold.

“Let me show you the wall of honour”, Bong says.

In the shop, with pride of place on the wall, are the pictures of those who have ‘graduated’ from Fazenda de Esperanza over the last few years. Bong points out himself and some of those who I’d met the day before too.

Bong is proud of his newfound purpose in life. He tells me how he travels to the farm most days, because not only does he like to help the others out, as many of the other Ex’s do too, but the farm gives him a real purpose. He doesn’t know where he would be without the community. He would simply be living alone in Masbate City otherwise.

With Christmas just around the corner, Bong suggests that we cheer the others at Fazenda de Esperanza up with a few gifts. In the supermarket, we buy a stash of chocolate and a new portable speaker for the dormitory.

The next day, Bong, on his tricycle, heads back to Fazenda de Esperanza as he always does, to the farm that gave him hope in an otherwise dark place.

Fazenda de Esperanza is welcoming to visitors interested in learning more about the establishment. You can find the Farm of Hope an hour’s drive away from Masbate City. The easiest way to travel here is by private transport. Ask at the shop by the cathedral in the city centre (opposite ) for help or extra information if you would like to call in.

Travelling to Philippines? Sign up for Air BnB to book your accommodation using this link HERE and you’ll get £25 free credit towards your first booking!