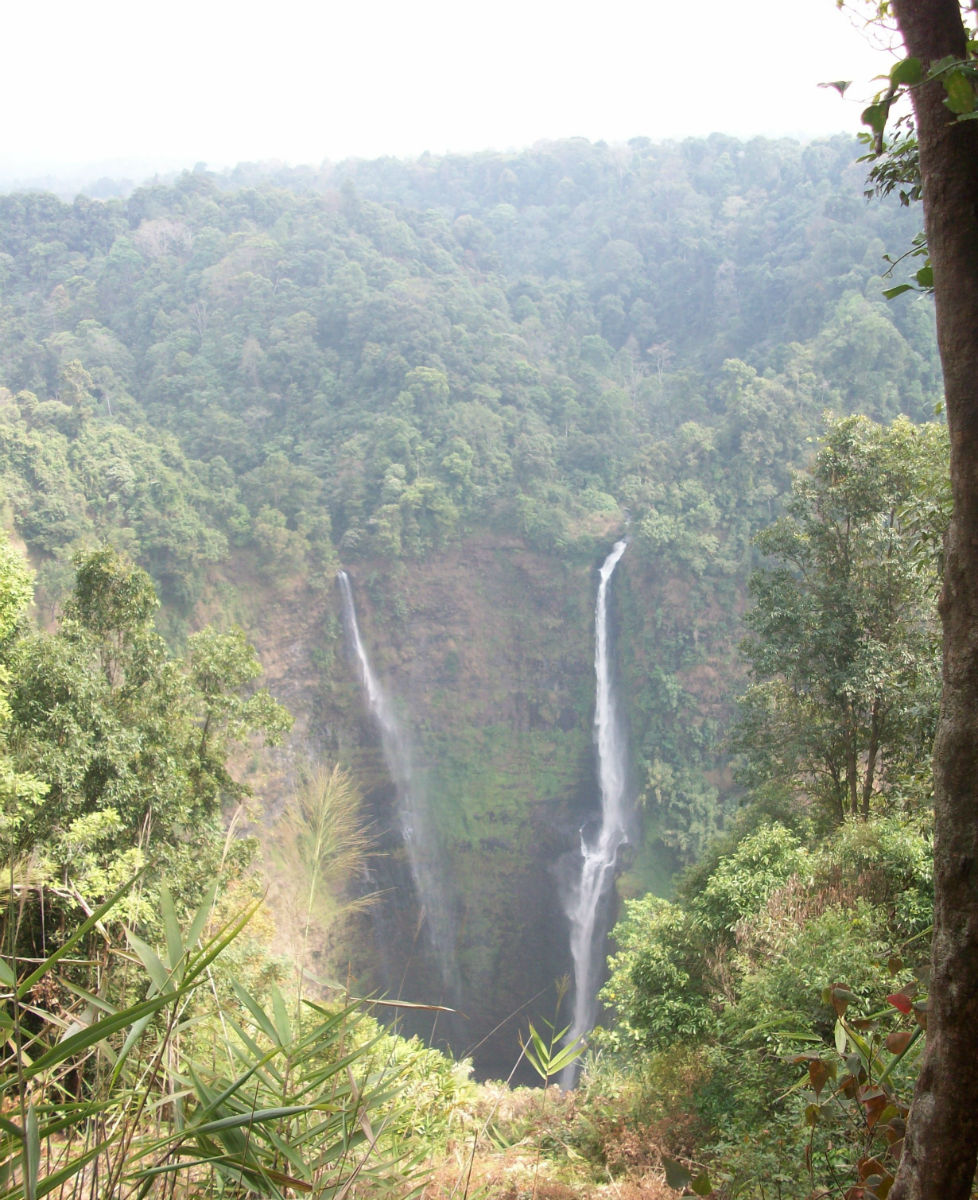 The Tad Fane waterfall plummets over 120 meters from the cliff side into the jungle canopy.

This is the tallest waterfall in Laos, its twin streams of water hurtling over the abyss and into the trees below. 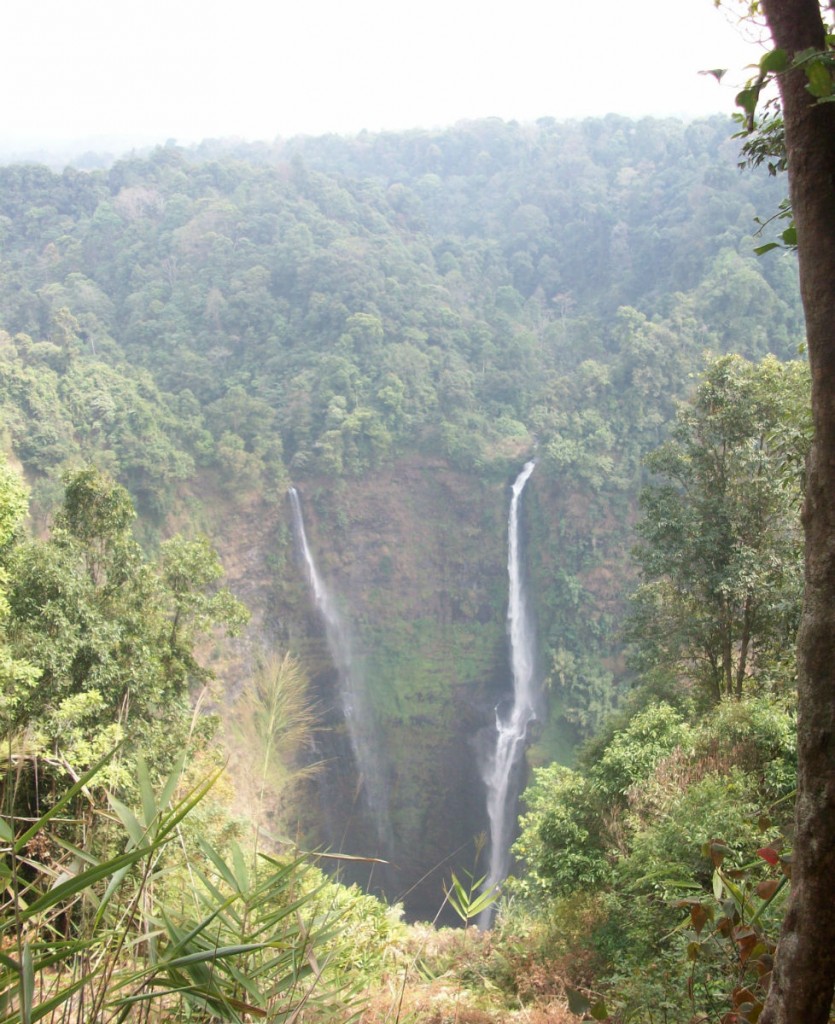 The plunge pool was out of sight, the cliffs themselves enveloping the view, while the dense, green foliage wrapped itself around the basin, rising high into the sky. Far below the continuous sound of thundering water echoed its way upwards, mixing with the sounds of birds and wildlife.

The Tad Fane waterfall would prove to be a wild natural attraction. Hidden in the dense greenery of the Bolaven Plateau of Laos, we followed the dirt tracks that led us into the forests, before the deep gorge of the falls was eventually revealed to us through the trees. 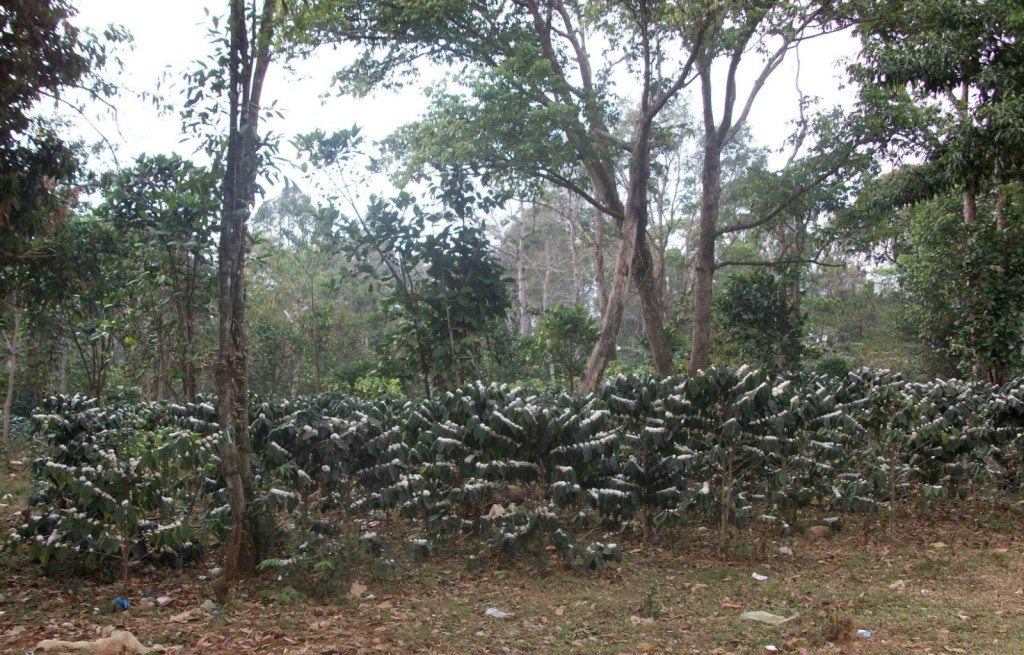 From the top, it is hard to see where the water hits the bottom. A narrow track leads down through the trees, winding its way around the edge of the gorge- on good days, it can be easily traversed. 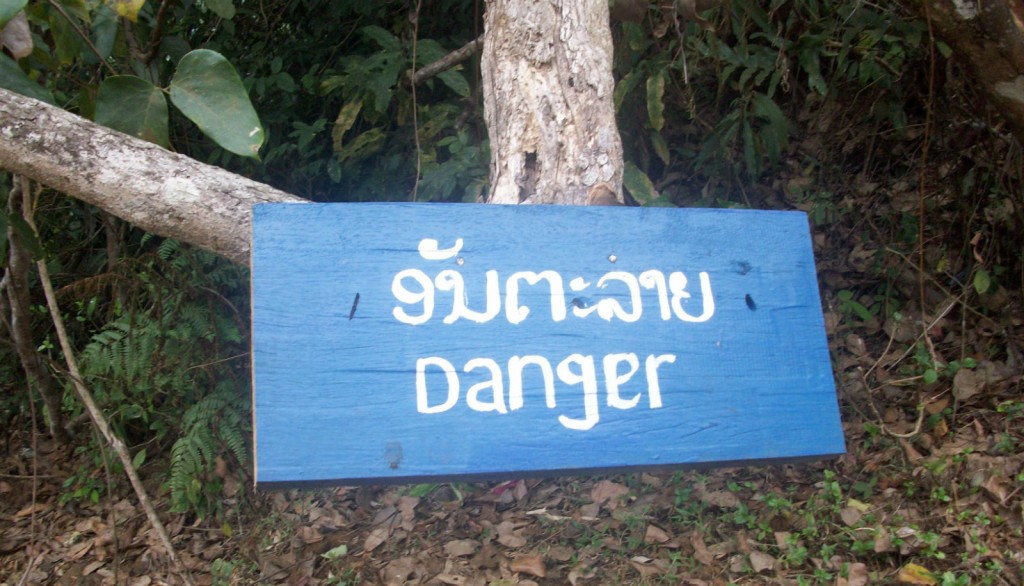 Earlier though we’d seen heavy rains, and the sides of the track were slick with mud and crumbling away in places. Venturing down slowly, the vibrant, prominent DANGER signs soon turned me back, away from the treacherous path. Deciding that it would be foolish to continue, one of my travel companions followed as well.

The view from the top wasn’t all that bad after all. 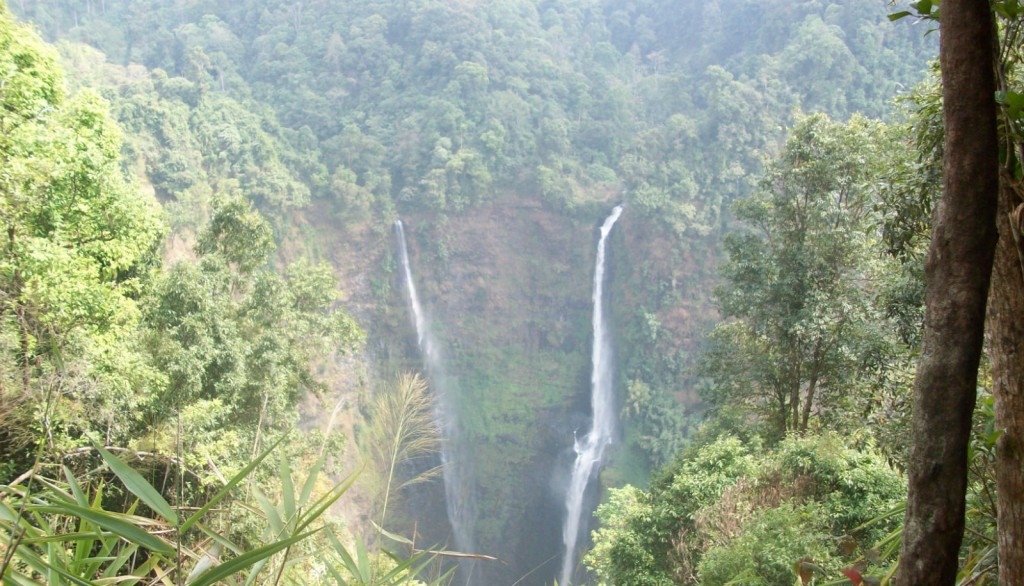 But ignoring the DANGER signs and our solid words of advice, our third companion recklessly carried on down the path, foolhardily attempting to reach the basin of the twin streams.

With the spectacular falls roaring away, at the top we relaxed at the nearby lodge, wondering how far our friend had got while we sipped away at cold Beer Laos. 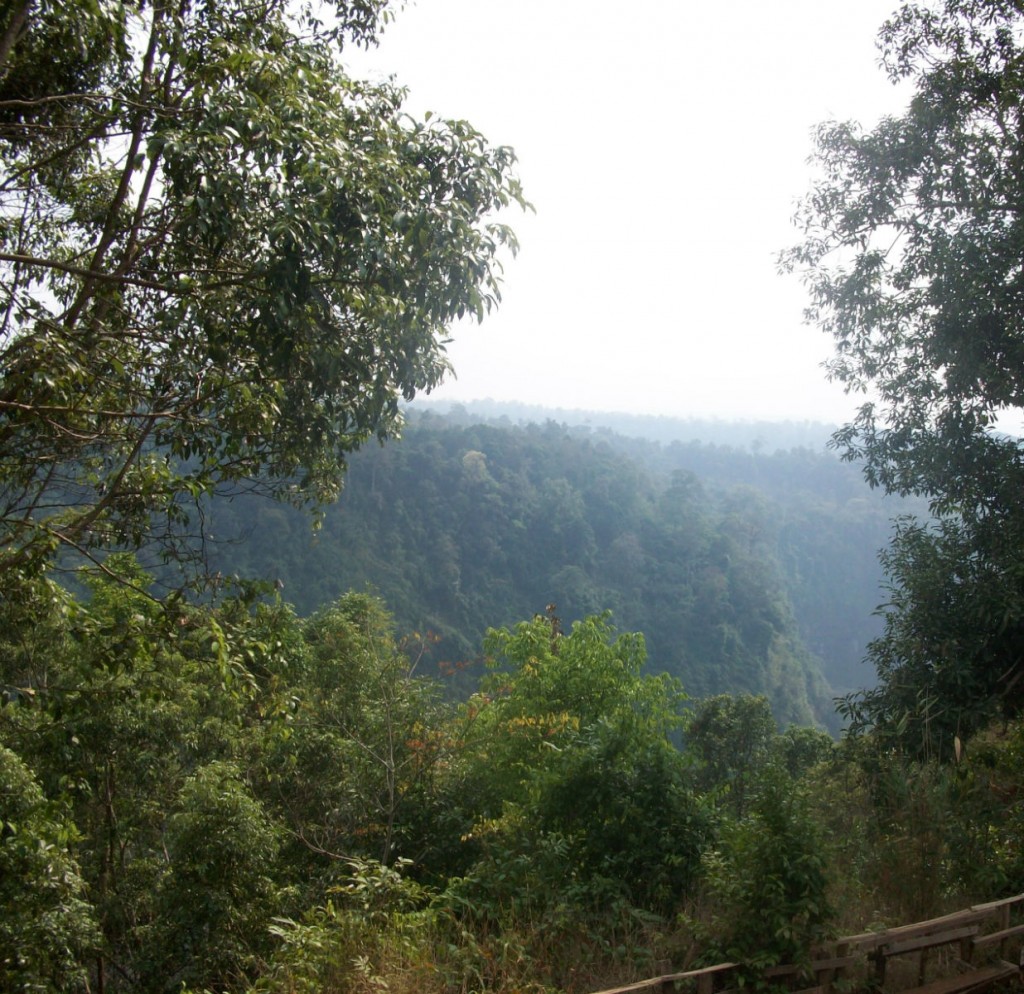 The path around the Tad Fane waterfall proved to be as treacherous as it looked. After a few more beers we began to wonder where our friend was. We headed back to the track, and started walking down again, shouting for him. We came to a fork – on one side the path was mostly non existent, and we reasoned that he’d hopefully headed down the intact one.

The roar of the falls was louder now, and we headed down the more intact path. Not far down though and it was clear this was just as perilous. This path fell away, the mud crumbling down into the gorge beneath. We were reluctantly forced back the way we’d come from.

At the top, there was only a cow waiting for us. 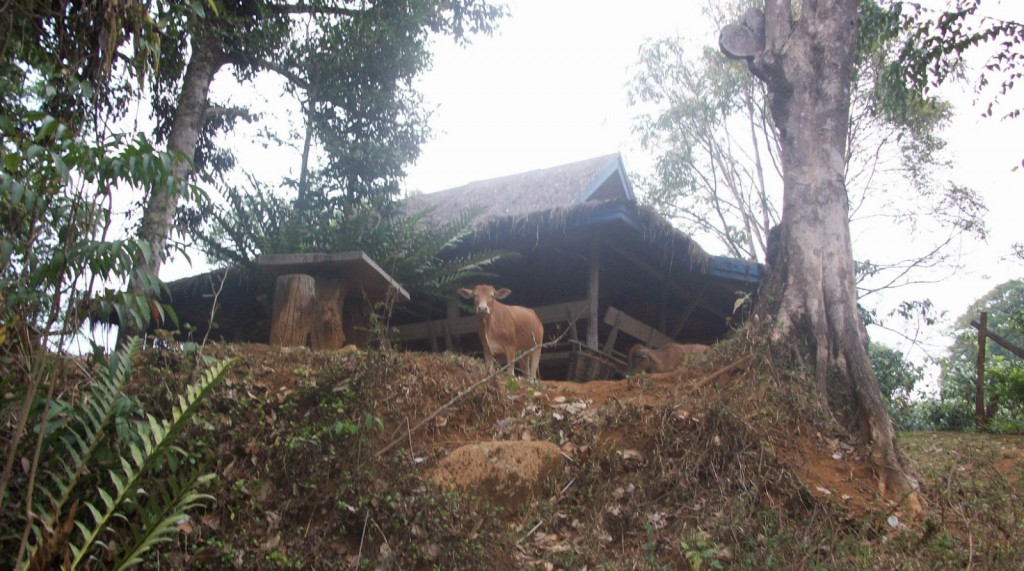 Hoping that we’d missed him at the top while we had been drinking our Beer Laos, we set about looking around through the forest, peering into abyss every now and then, to snatch a glimpse of the track.

There was no one else in sight though- not until we headed back to the entrance of the track and there, sat in the bushes, was an exhausted figure. Rushing over we realised it was our mate. He was battered, muddy and disheveled. We gave him a beer, and he said he’d fallen into the waterfall. Somewhat roughed up, after a while he began to tell us what had happened.

The track had crumbled away beneath his feet, and he’d been left hanging from the tree roots, a sheer drop beneath him, the Tad Fane waterfall crashing down behind him. Where we had turned back, he was trying to haul his way back to safety- the sound of the falls had drowned out his cry for help. One lucky root had held him up and given him the leverage to get back to the track. And from then he’d stumbled back to the top, where we found him.

The Tad Fane waterfall was beautiful, but this wild place was more perilous than it should have been. When in Asia, never ignore bright blue DANGER signs. Or you could end up falling down the tallest waterfall in Laos.

For more reckless adventures in South East Asia, then read about the Cambodian motorcycle ride of death HERE.