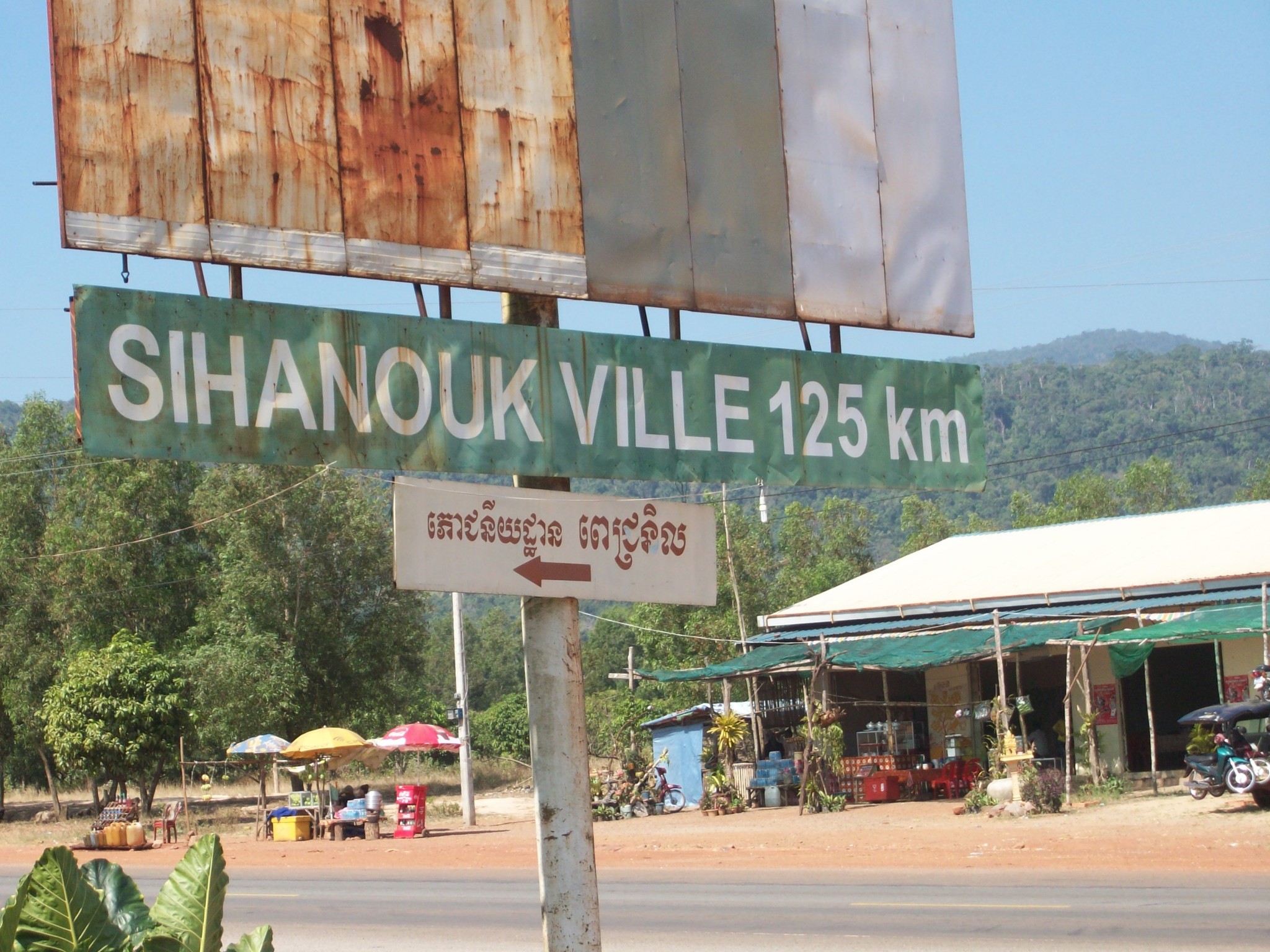 You might share a few of the best tonight as the beers get drunk, and then you’ll try and forget the worst of them as you move onto the whiskey. Inevitably, this New Year’s Eve will bring me flashbacks of near death on the dusty, dirt roads of Cambodia, when with almost no motorcycle experience I foolishly attempted to ride across the country to see in the New Year in Siem Reap. 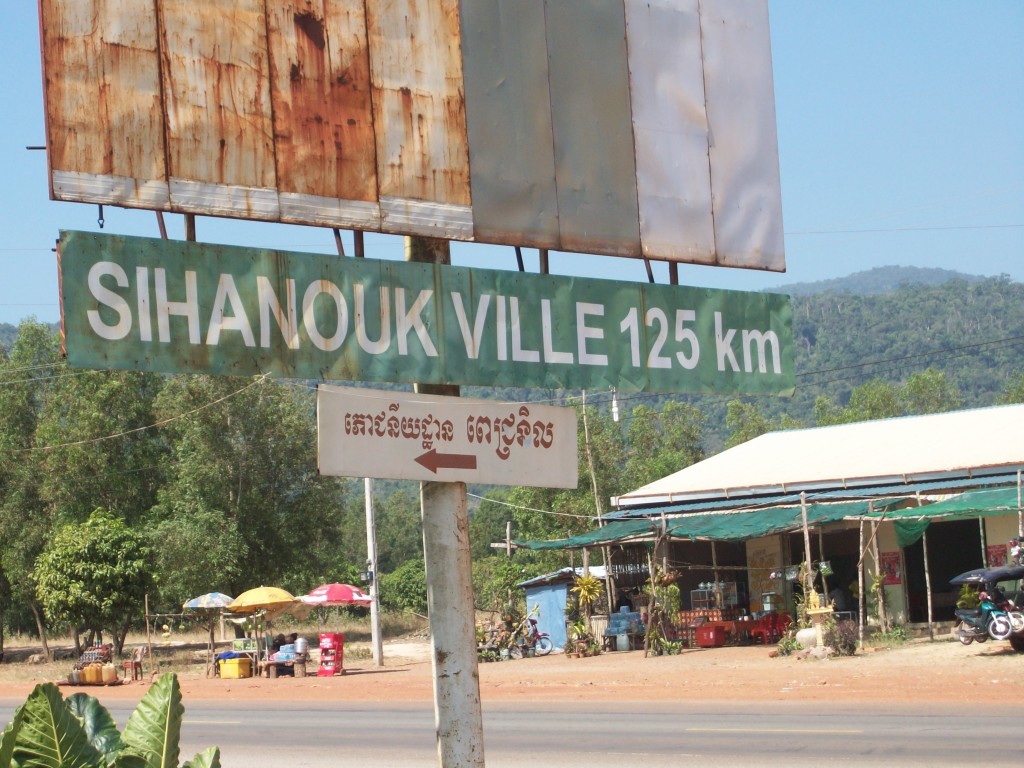 Cambodia is a haunted country. The ghost’s of the Khmer Rouge stalk the countryside, while the government encourages corruption and does little to help. But Cambodians are enterprising and resourceful, which is why almost anyone will rent you a motorcycle if you have a few US Dollars. Even if you can barely start the thing.

On New Year’s Eve a few years back I found myself rashly hiring mopeds with a few friends in the beach town of Sihanoukville, with the foolhardy plan of racing across over five hundred kilometers of potholed Cambodian roads. The aim was to reach Siem Reap, home of the world’s largest religious complex, Angkor Watt. You may have heard of it. We thought it might be a nice place to bring in the New Year. The vast geographical distance between our current location and desired location didn’t really seem to matter.

Setting off, the traffic in Sihanoukville wasn’t too bad.  A few tuk-tuks here and there, and nice wide roads. 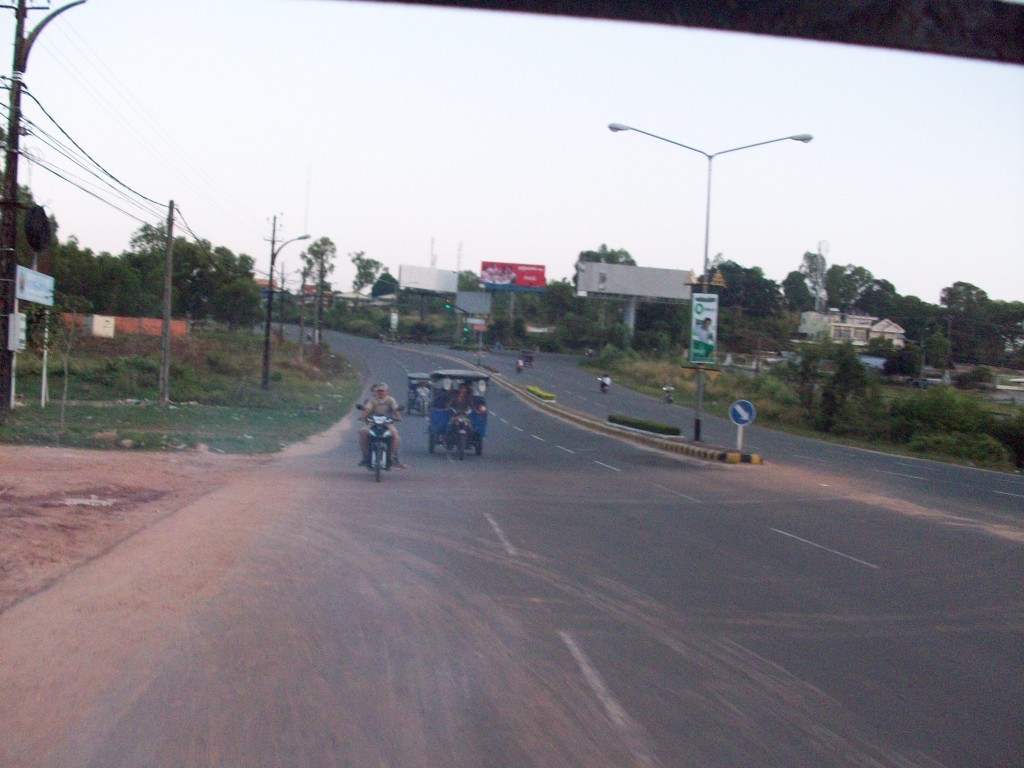 Those nice roads soon turned into dust and gravel, as we headed along the only highway to Phnom Penh, Cambodia’s capital. At least we couldn’t get lost.

We were leaving the golden sands of the Cambodian coastline behind. 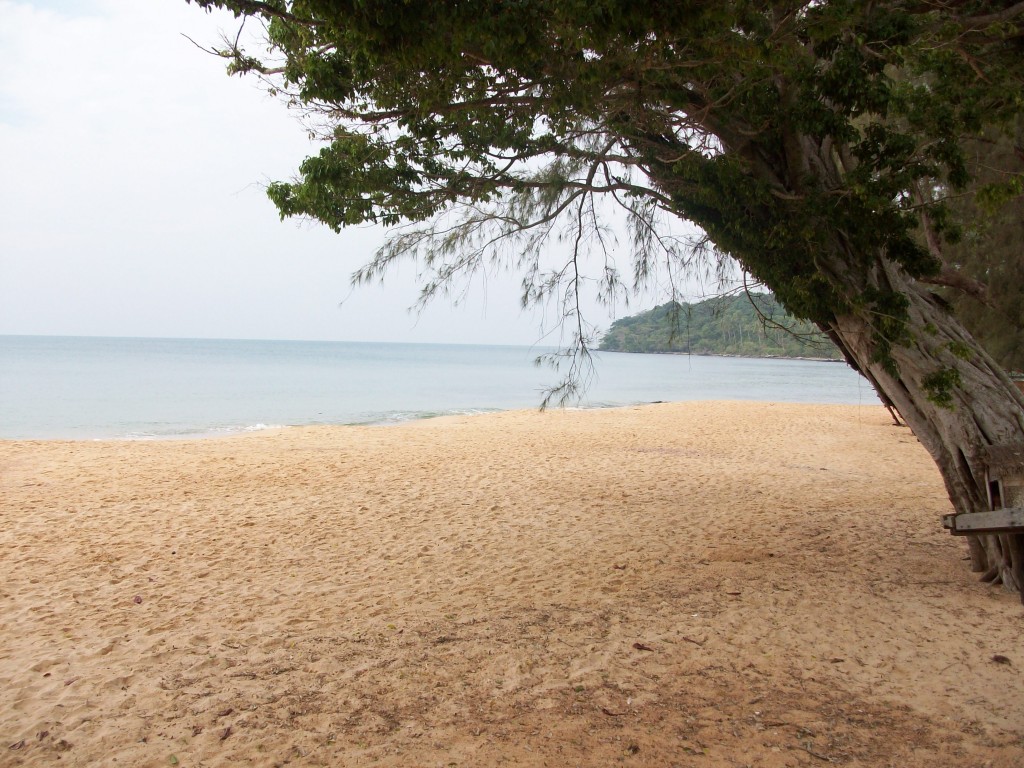 In exchange for a face full of dust and rock. 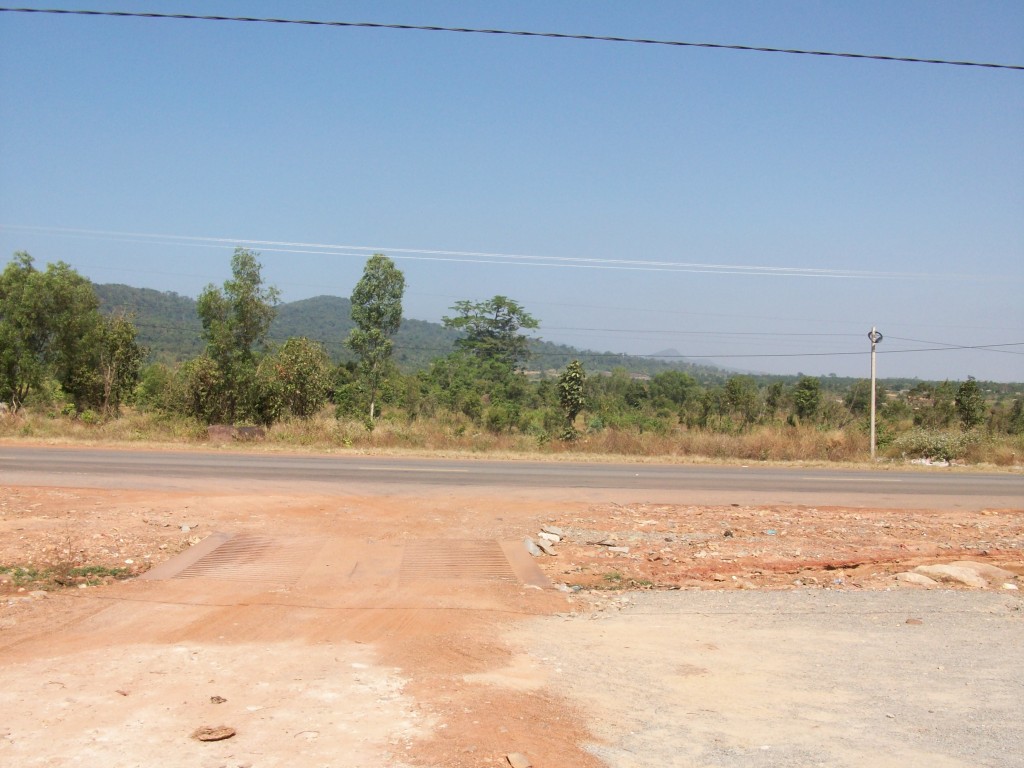 It soon became clear that we had ridden well out of our depth. Equipped with only rudimentary, self taught bike handling skills, it was apparent that we could only get so far. Being the only road, buses and lorries powered along it, indiscriminately reaping havoc on those careless enough to get in the way. We soon found ourselves being forced off the road, skidding off into the dust to avoid head on collisions with vehicles that occupied most of the too narrow road or simply felt like driving on the wrong side. 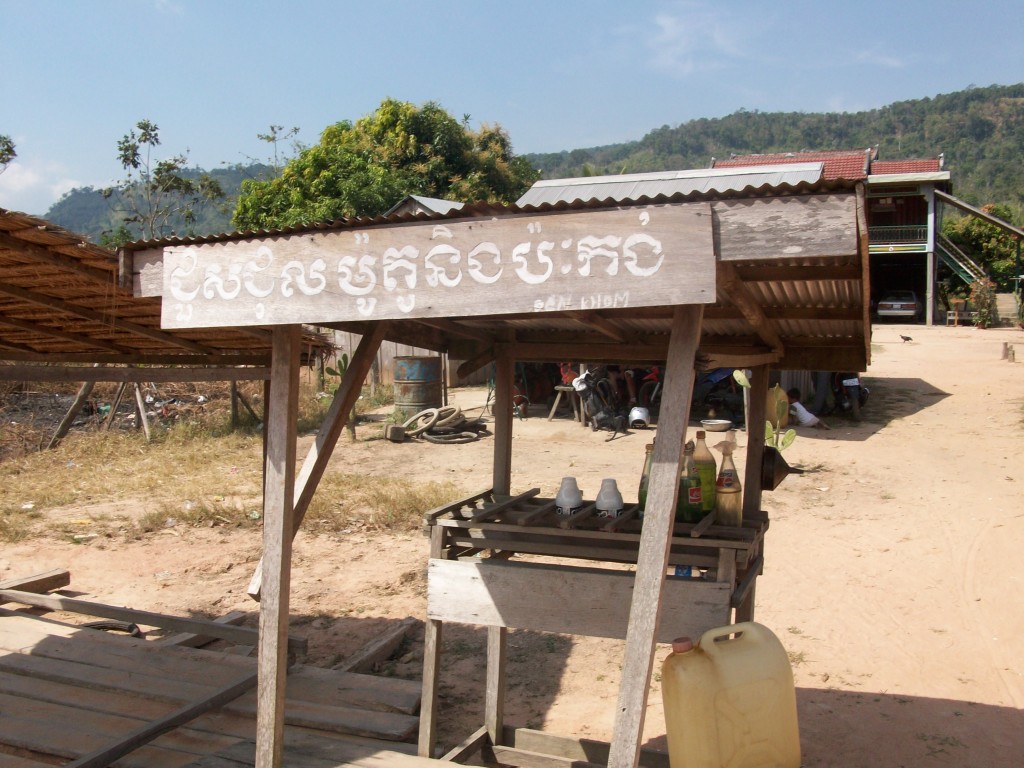 And it turns out that 125 CC mopeds don’t exactly have a huge fuel carrying capacity. Burning through the diluted, local petrol meant frequent stops, and by midday, if you were to measure progress in terms of distance, we were distinctly failing in our task.

And then it just got worse. Sunburned, weary and on edge from avoiding death all the time, I pulled off the road as a bus hurtled towards me, honking maniacally. My friend behind followed me off the road, and then the other friend pulled over too. But the last guy didn’t stop in time, and skidding out in the loose sand swerved into the bike behind me, and went down hard.

With blood in the sand I feared the worst. But both of them got up.  One of them was bleeding from a head wound, but the other seemed alright. The bikes were battered. 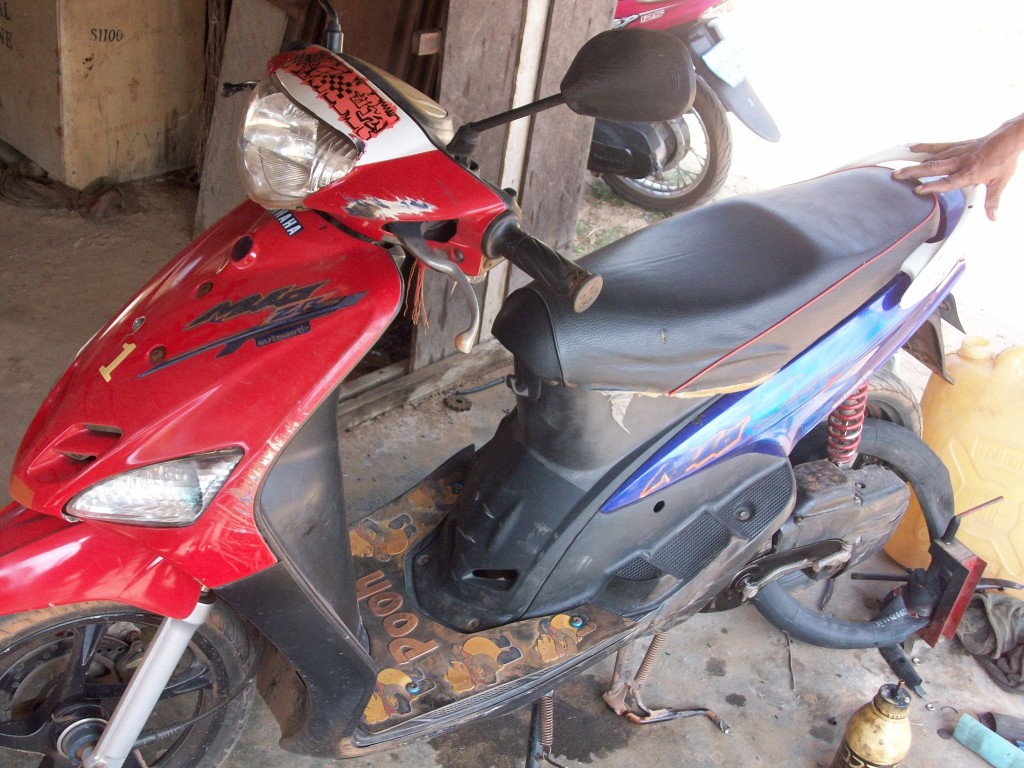 I went off up the road and found a small shop with a first aid sign outside. The broken bikers followed, and were beckoned in by a  Cambodian man who saw to their wounds.

This self styled Doctor had a Business Diploma from the University of Phnom Penh pinned to the wall, but with no other medical options, he set to work on my friend’s head gash.

The only medical equipment available were crude stitches and bandages. And abundant quantities of iodine. A lot of screaming commenced as this Doctor cleaned up the wounds. It was brutal but necessary. Did I mention there was a lot of dust around?

It was also clear that we would get no further this day. Shattered and demoralised, we saw to the bikes, fixing them up just enough to get us on our way again. But we didn’t go onwards, we turned back. We hadn’t even made it half way to our half way point of Phnom Penh. We’d ridden barely one hundred of the five hundred kilometers we had naively set out to cover.

Bleeding and bruised we drove slowly back along the road we’d been following all day, dancing with death along the way. A flat tire later and we rolled back into Sihanoukville as the sun set. Too exhausted to enjoy the tropical, coloured sky, we parked up the mopeds. As soon as midnight hit and we saw the first firework explode above, we unanimously brought the day to an end, defeated by our own ridiculous ambition and extreme lack of foresight.

The Cambodian roads were truly death’s own  on a 125 CC moped, and this New Year the desperate tale of the foolhardy travellers who tried to reach Siem Reap will inevitably be remembered by those who survived, but at least I’ll be enjoying a cold beer and not risking a head on collision with a Cambodian truck driver while it’s reminisced.