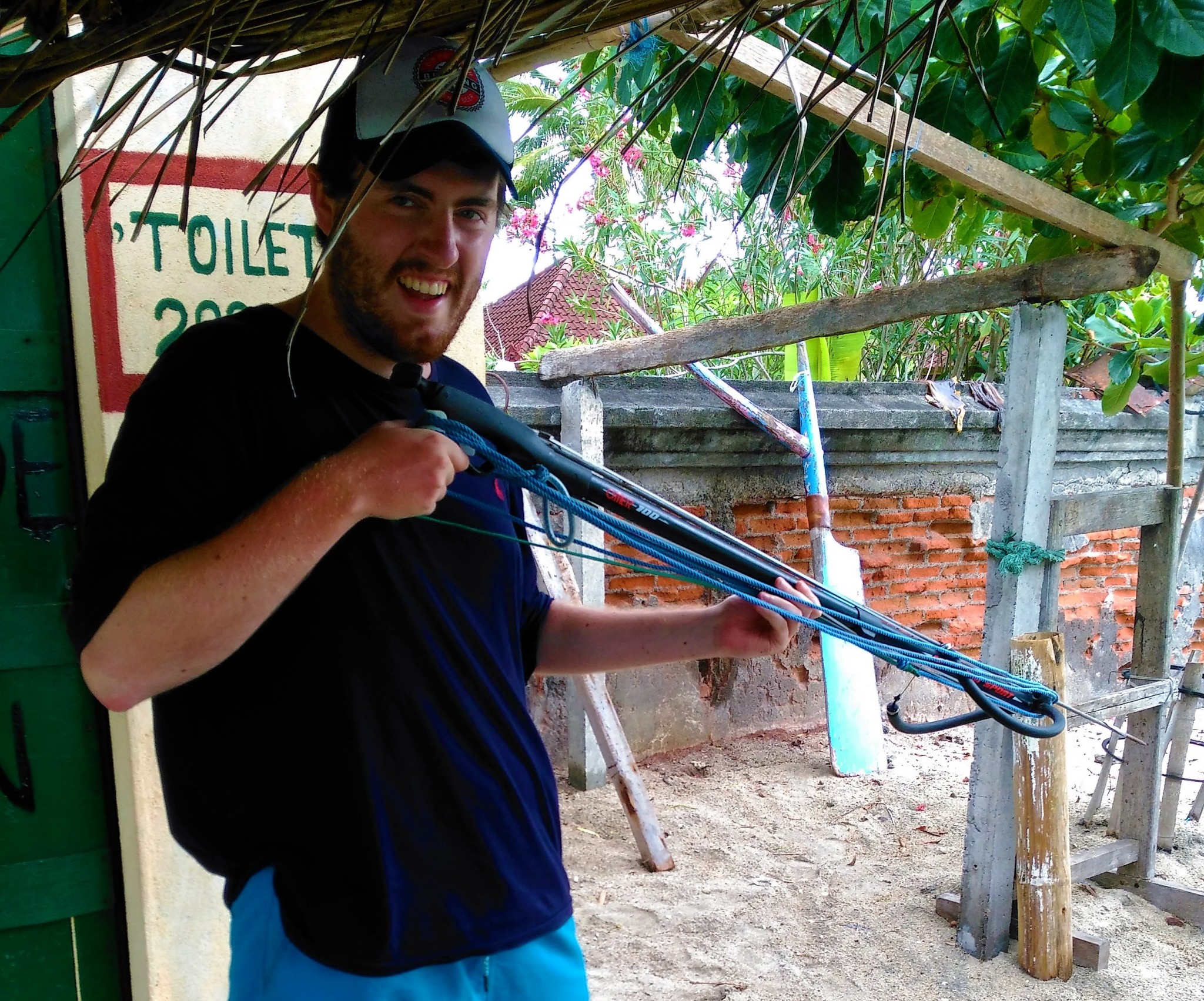 “Hey guys! Fancy spearfishing?” Mad Jon came out of his beach side hut, with spear gun in hand to tempt us out onto the ocean. It didn’t take much persuading before we were climbing into the boat and getting ready for our first experience of spearfishing in Bali. 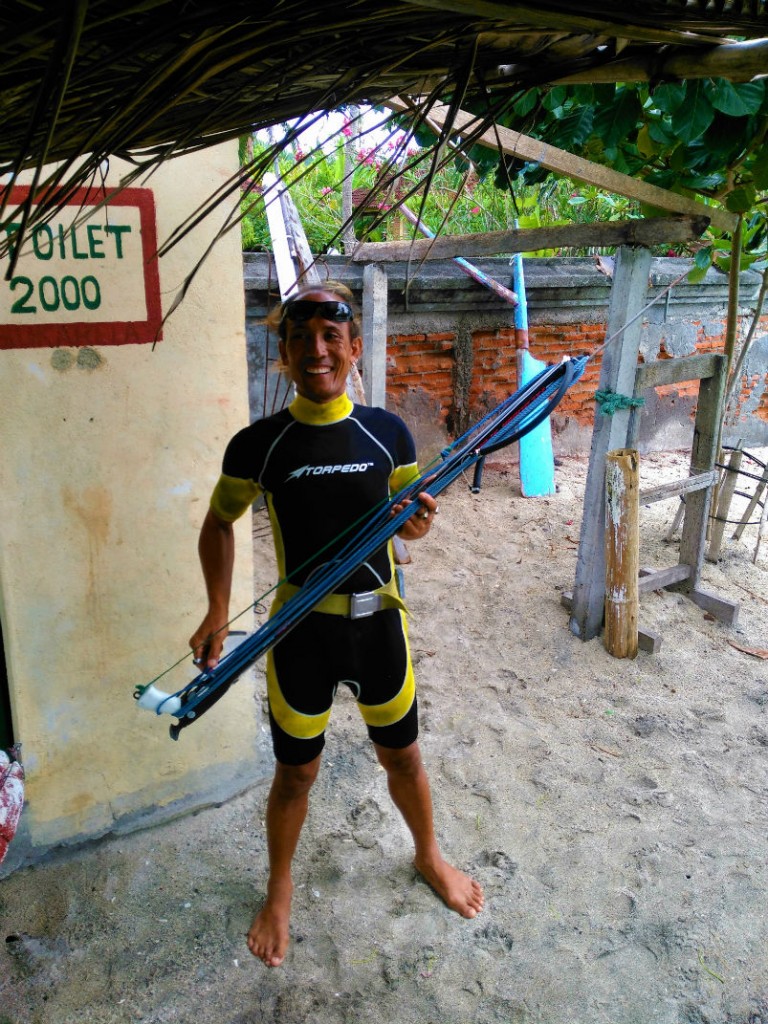 Made Jon- Photo by Joseph O’Connor

My friend and I were motorcycling around Bali when we stopped in the village of Candidasa and headed down to check out the sea front. There wasn’t much of a beach here, but next to the Lotus Lagoon was an old hut, and Made Jon, the king of spearfishing, came out to greet us- and to show off his spear guns. 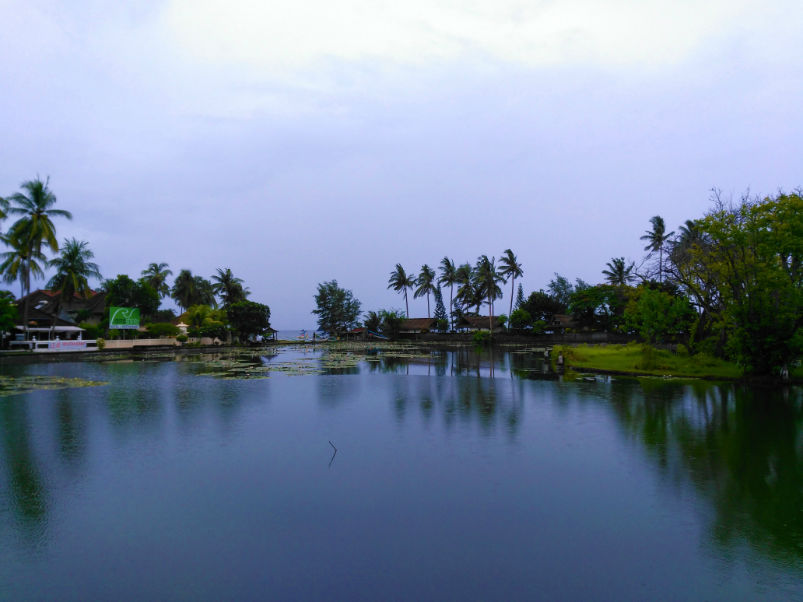 Made Jon, or Mad Jon as he was soon dubbed, offered to take us out in his boat to catch some fish and then barbecue them up. It was just what we were after. What better experience in this day and age than being able to say you’ve caught and killed your own dinner? And I was in the mood for some fresh fish and a Bintang beer. 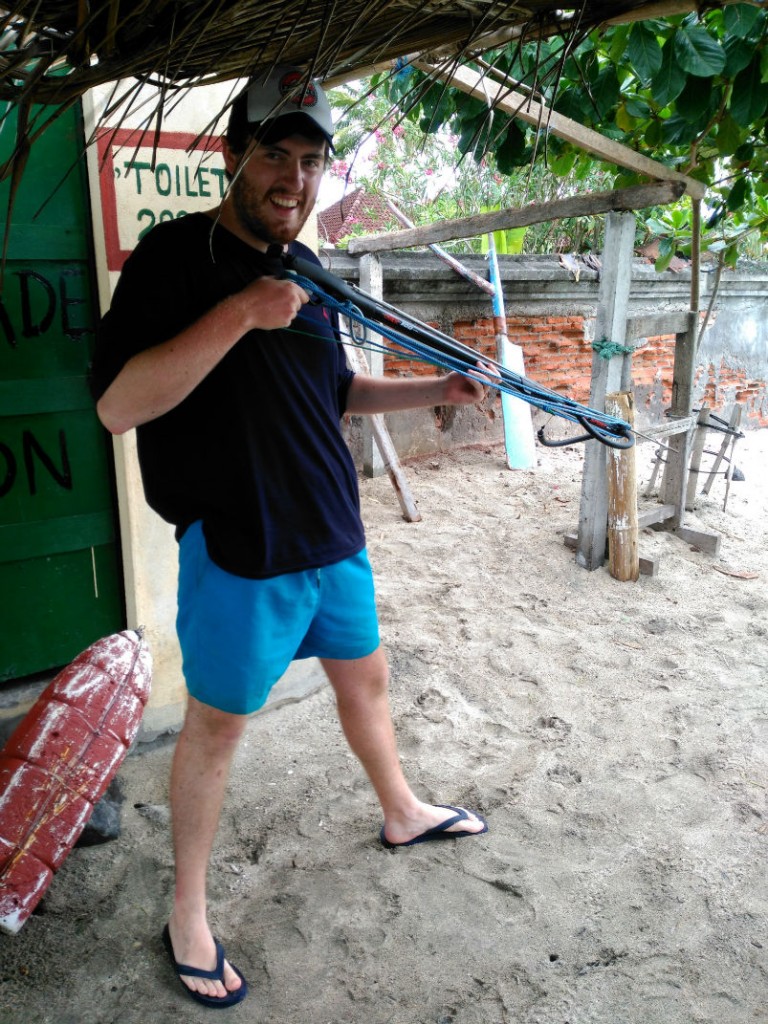 Jon’s personal spear gun was almost the size of him, he could barely reach the end to reload it. It meant he could hunt bigger fish, deeper and from further away. Not exactly having much experience in the field of spearfishing, he gave my friend Joe and I a smaller, easy to handle spear gun. But even this was tricky to reload each time. 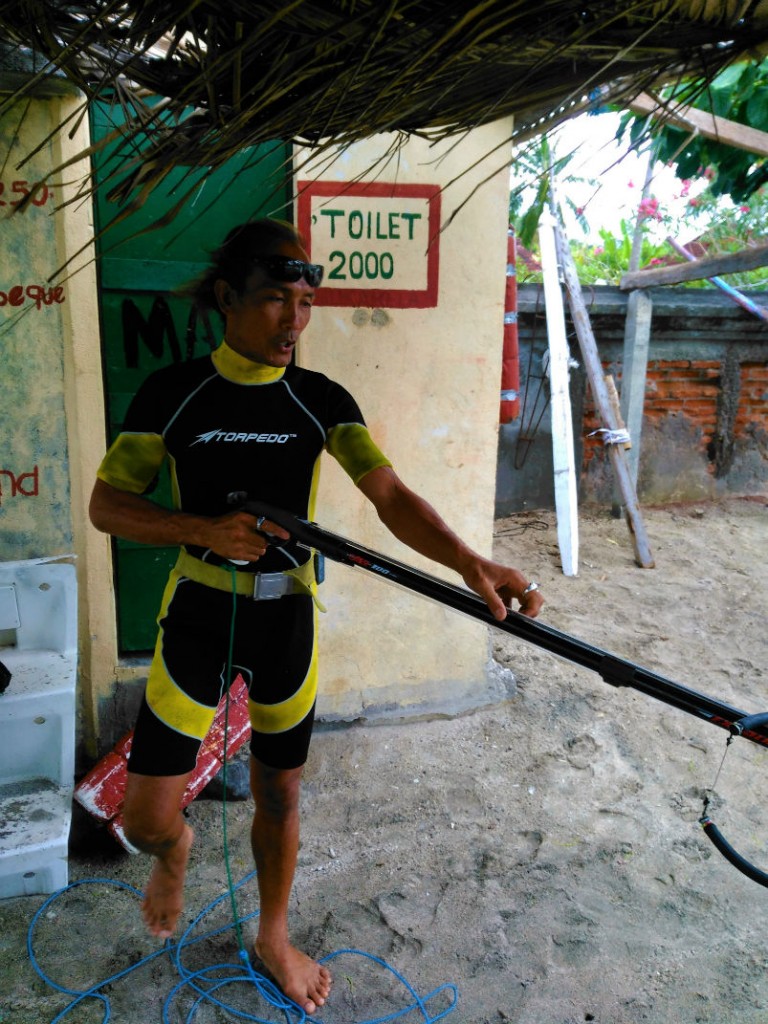 Jon gave us a crash course in spearfishing. He showed us how to reload and advised us not to point it at each other when it was loaded. Then he gave us some fins, we grabbed our masks and snorkels and jumped into his boat. 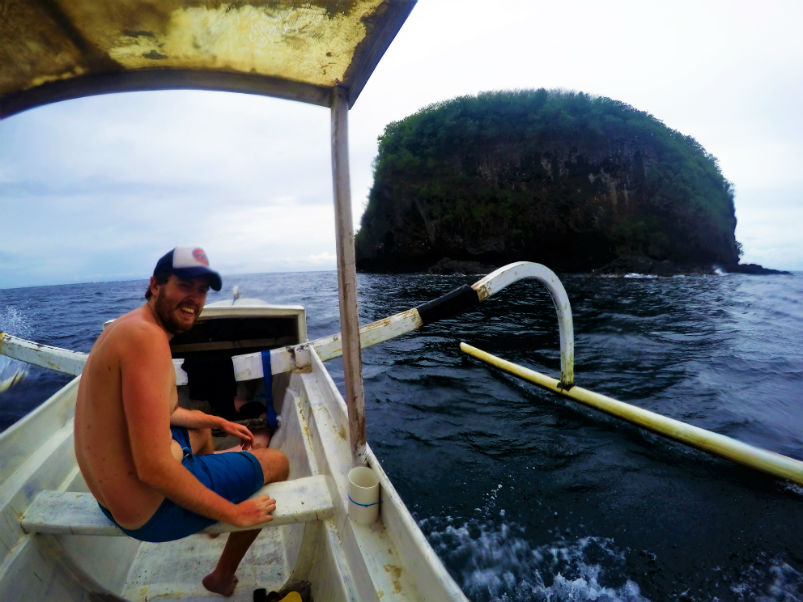 Just off the coast of Candidasa are some rocky, uninhabited islands. The boat headed towards these, and we jumped in, spear gun loaded, to begin hunting around the coral that’s strewn around the islands. 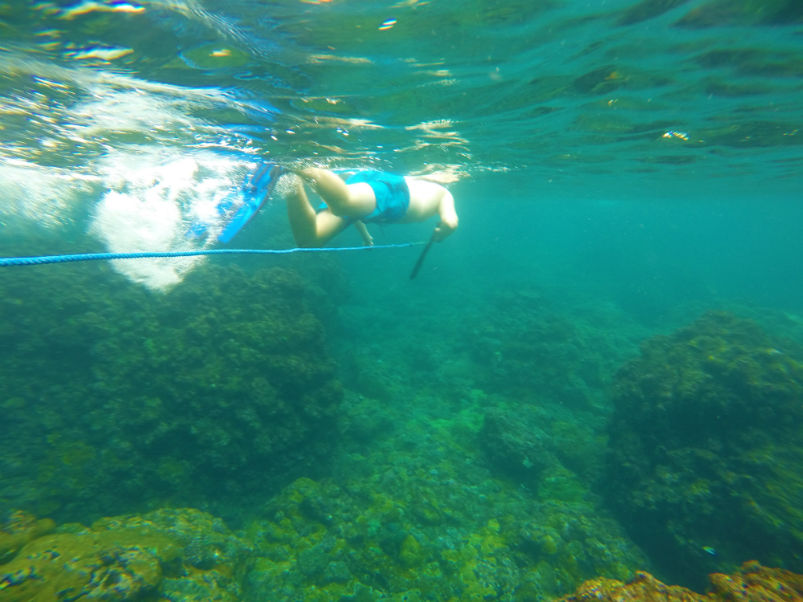 With one spear gun between two of us, we took turns loading and shooting. The second person staying well back so as not to get a stray spear through the foot. Jon had swam off immediately, he was more fish than man, and we wouldn’t see him for hours while he hunted bigger game further out from the coral. 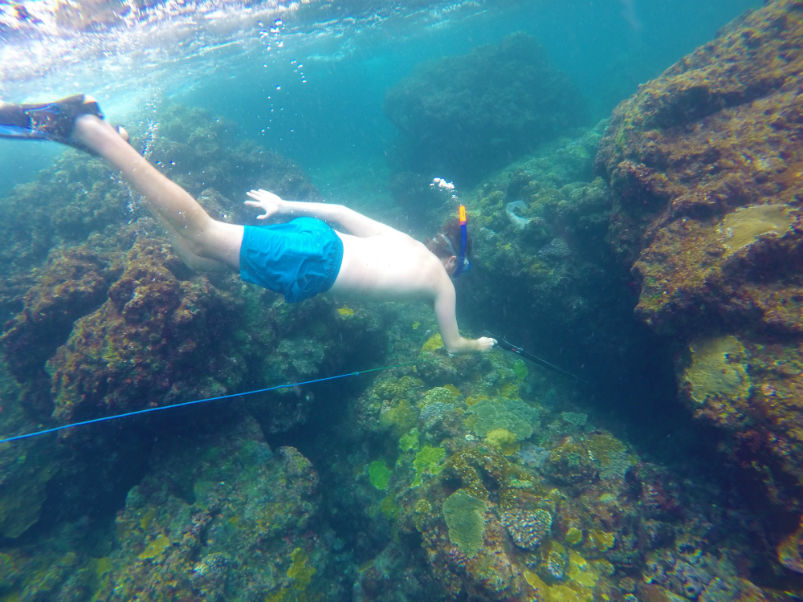 Shooting a spear gun accurately underwater isn’t easy. And fish are quick. Very quick. And don’t forget the inconvenience of light refraction. And the ridiculously strong current. And the crabs who attacked me. Needless to say it’s a difficult way to catch dinner. 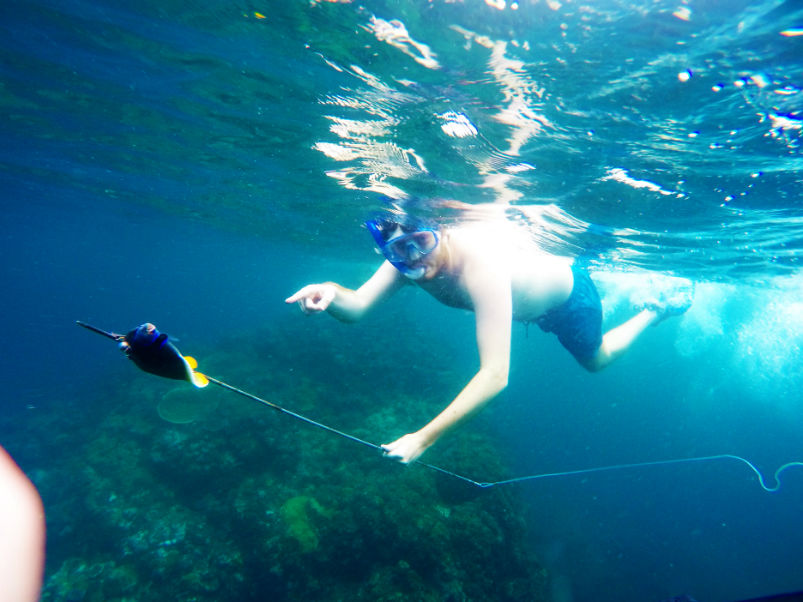 But we weren’t deterred, and after a few- okay, a lot, of misses, I eventually managed to dive down upon an unsuspecting fish, and triumphantly made my first catch of the day. Some of you might be sat at home wondering how I could ever possibly do such a thing to a poor little fish- poor little Nemo- but we put it to good use, everything we caught, we cooked up for dinner. Nothing went to waste. 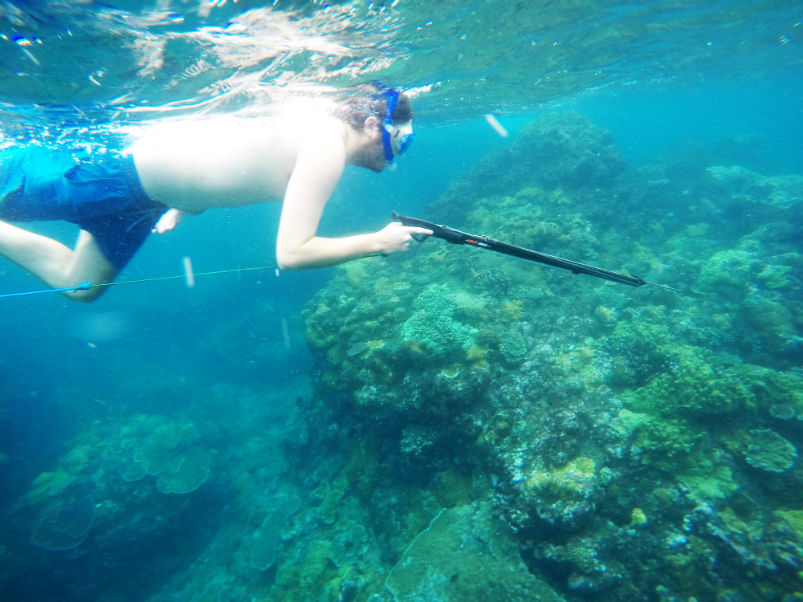 Back on the boat, we met up with Mad Jon, and his catch was somewhat more impressive than our meagre haul of one, small fish. He had some big fish, including a Leather Jacket big enough to feed a whale shark. If whale sharks ate fish that was. It was big, anyway. 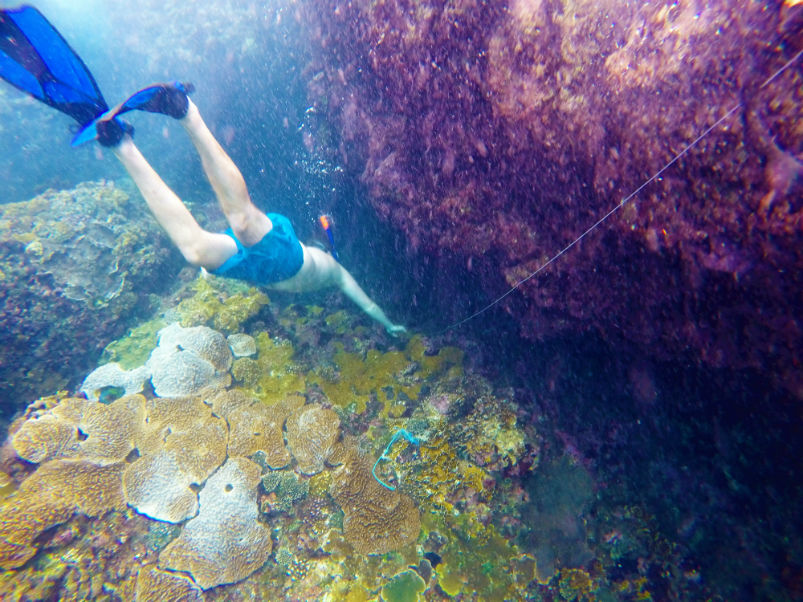 Not wanting to be outdone, we jumped back in, while Jon went off his own way again. He later said that he fishes most days, takes a few travellers out every now and then, and sells his catches to restaurants or keeps them for his family. He was good, and he knew where to find the best fish. We, on the other hand, were being dragged around by the strong current near the corals while in pursuit of smaller fish to fry. 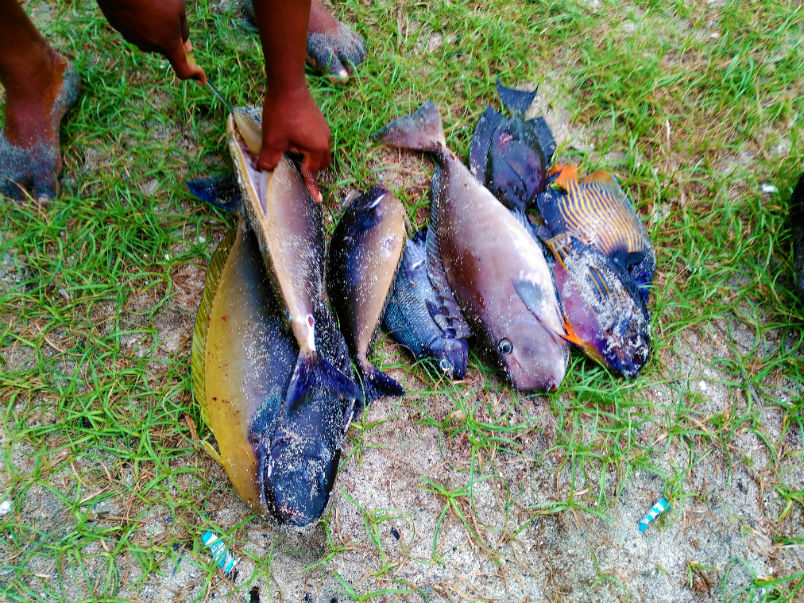 The big ones were Jon’s- Photo by Joseph O’Connor

At the end of the day we were heading back to land with a feast to barbecue. Myself and Joe had caught four fish between us, not huge, but I was proud of our hunting skills. Jon though, he had caught a lot, and they were big. 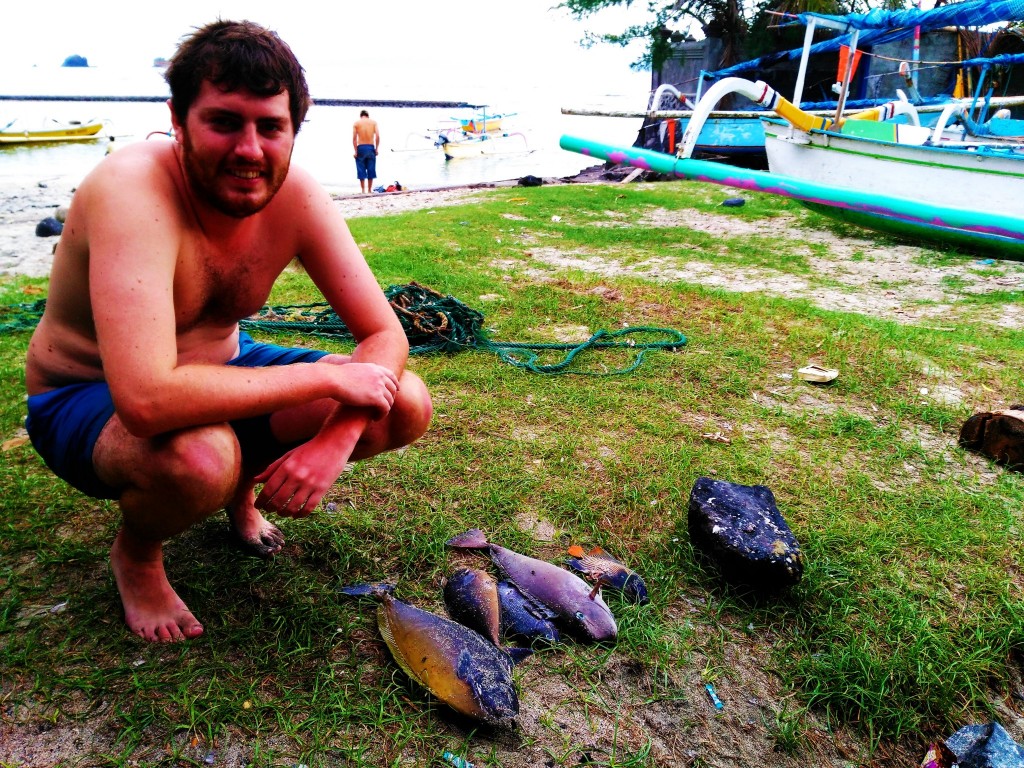 Jon called his mates over, and they got a fire going from coconut husks and gutted the fish we were going to eat. Some of the fish were given out as gifts, we couldn’t eat them all, and Jon would keep some for his own family too. He gave us a big leather jacket to cook up for everyone, and we barbecued three of our own catch as well. 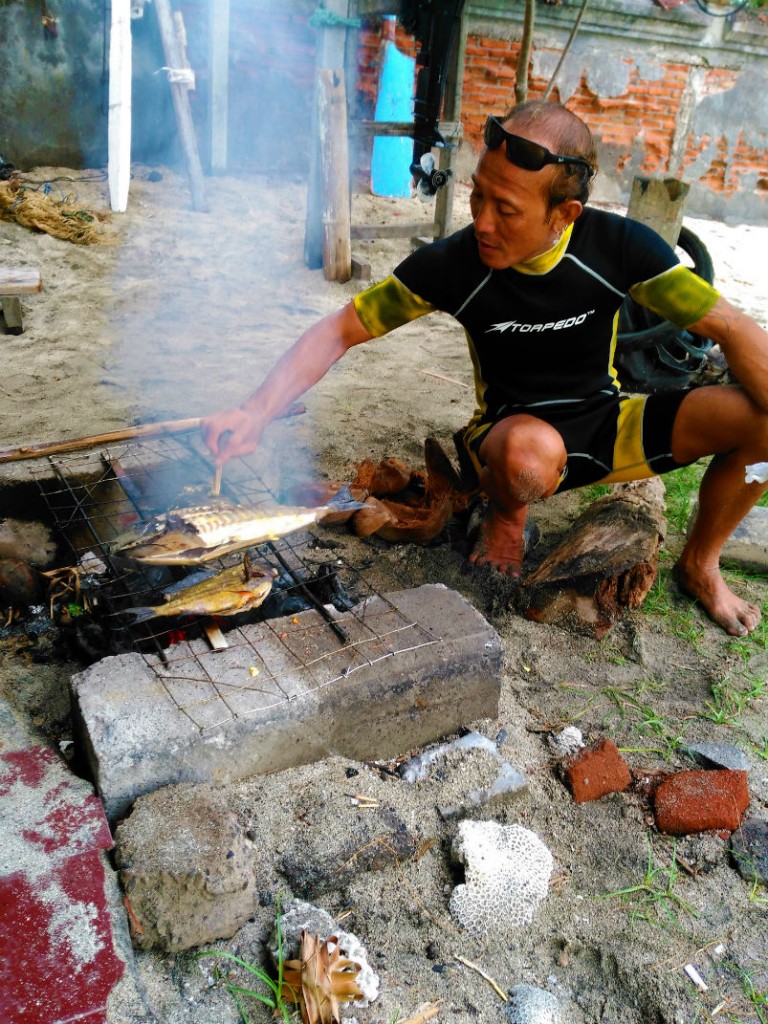 It was gourmet. Fresh fish was grilled over coconut husks, and as the sun went down we bought a few beers and waited for the food to cook to perfection over the flames. 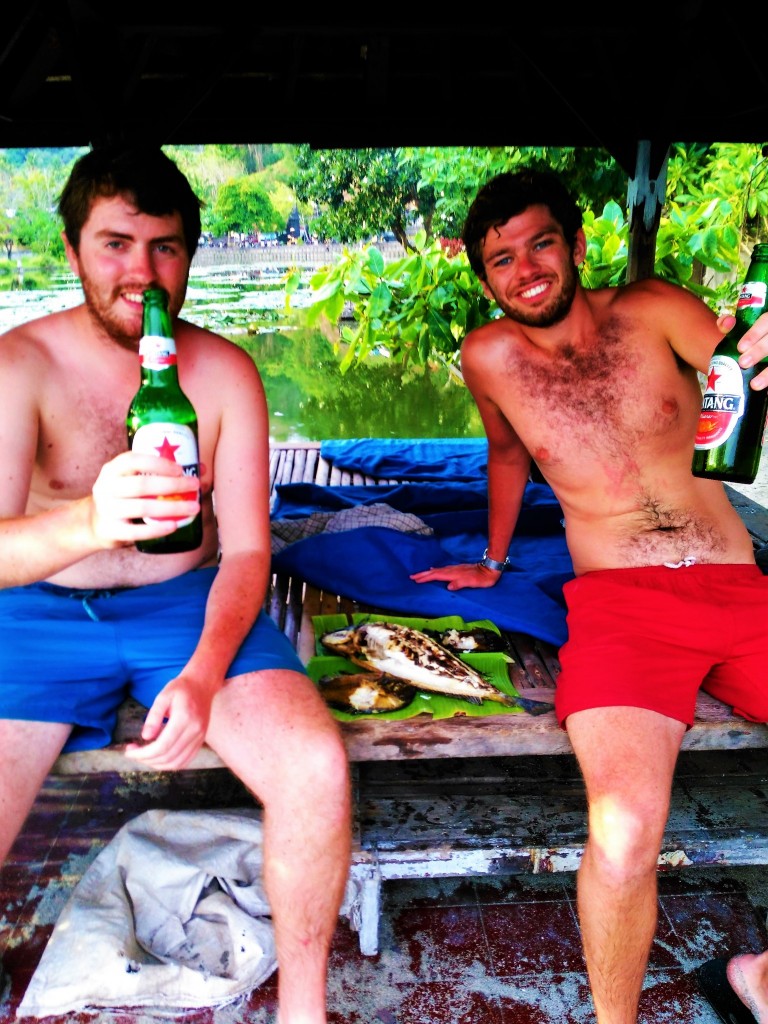 We grabbed a few banana tree leaves and laid out the feast, before digging into our hard earned dinner. Jon, might have caught the big, delicious fish, but the little ones weren’t too bad at all, and we ate them all before the sun had even had time to fully set.

For more Balinese adventures, then have a look at the abandoned theme park of Sanur.

Bali Off The Beaten Track