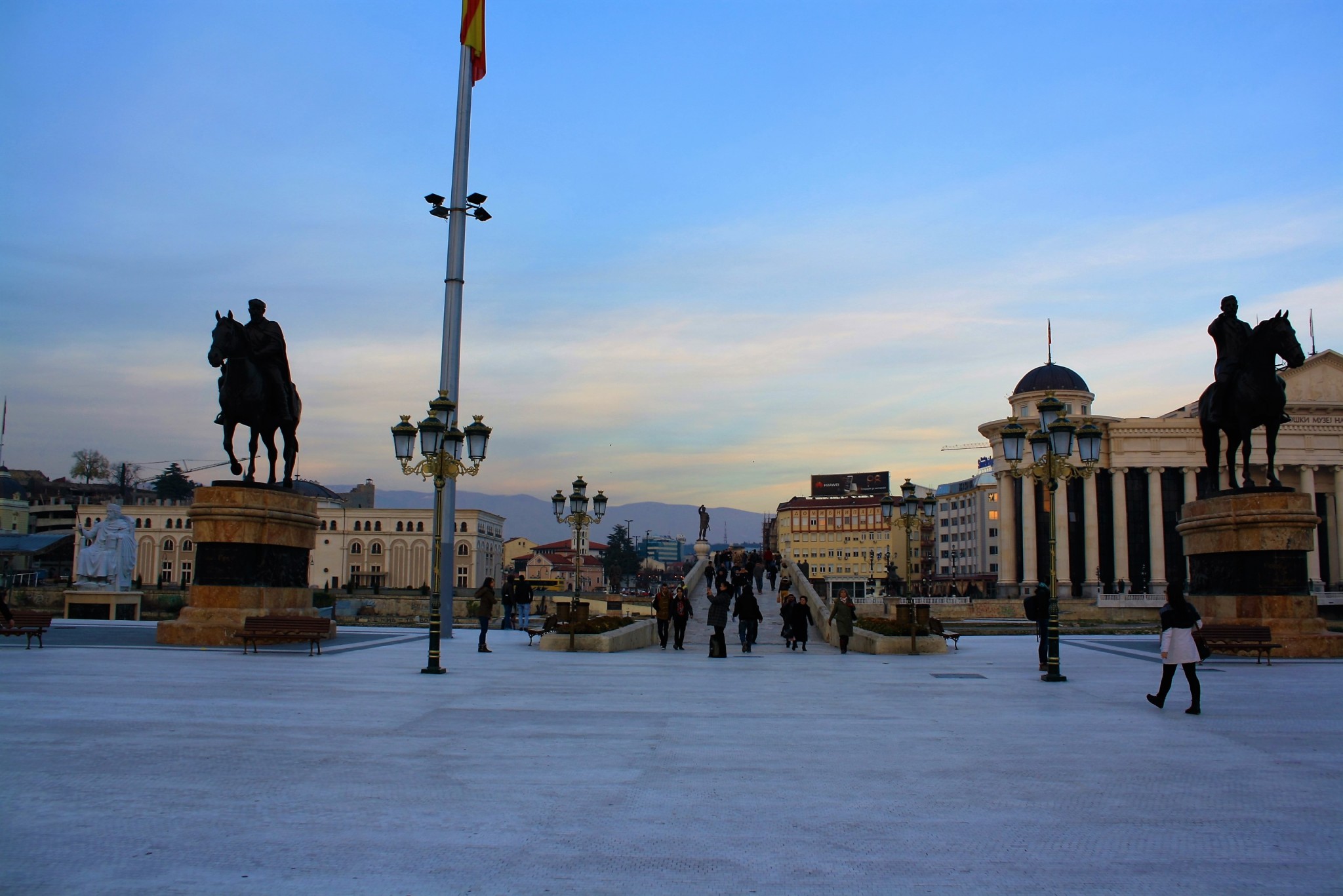 Skopje. The Macedonian capital and a city of statues.

This ancient city has stood in the heart of the Balkans for centuries, it’s changed hands between Empires, Kingdoms and rulers and now it’s a city that’s found its own independence, a diverse city that’s home to different religions, ethnicities and languages, but a city that is still searching for an identity.

That’s why they are building a tonne of statues. All over the place. 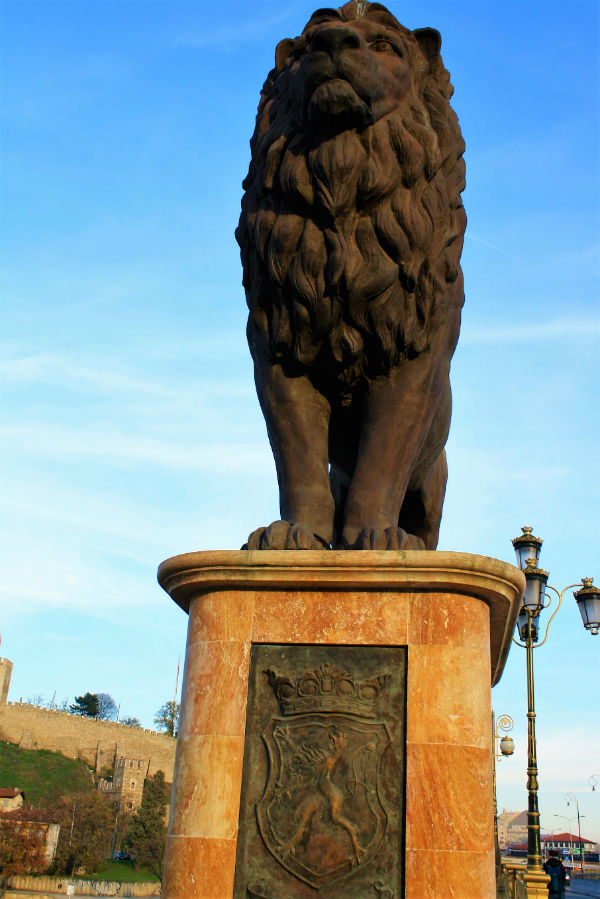 Macedonia was part of Greek Empires, then Roman, then Byzantine and Ottoman. The land has been conquered and settled by Slavs and Bulgars, it’s been invaded by Serbians, the Axis powers in World War II and most recently, it was a constituent Republic of Yugoslavia. Then, in 1991, Macedonia declared independence, to become The Former Yugoslav Republic of Macedonia, with Skopje as the capital. Catchy name right. 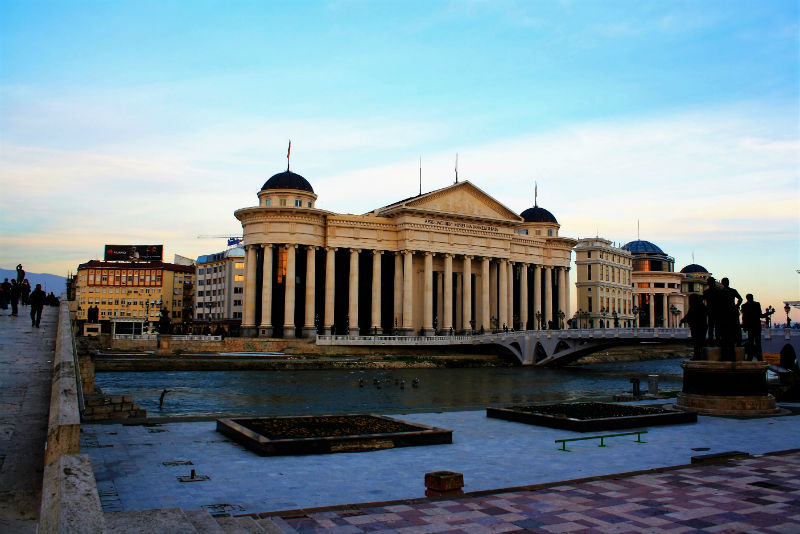 Skopje shows all the trappings of a multicultural and diverse history. It’s a small city, but around every corner there’s a different sight, a different piece of history left behind by the many conquerors and rulers who have walked through the old streets here. Even the name of the modern nation is the result of a conflicted historical dispute between the Balkan countries, and the rise of nationalism among the different ethnic groups. Greece to the South refuses to recognise the country as ‘Macedonia’. The Greeks have their own Macedonian region, they claim this to be the historical homeland of Alexander the Great, while the Macedonian’s claim the same. 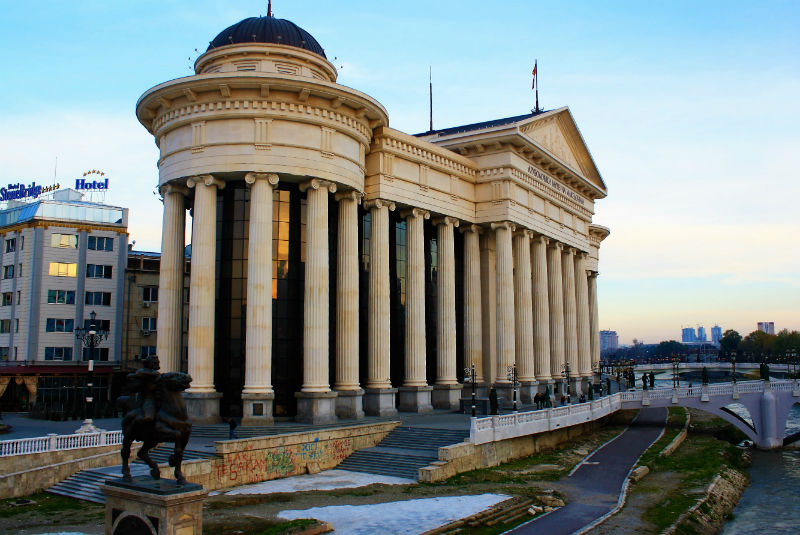 This gave rise to the outlandishly long official title of the country: The Former Yugoslav Republic of Macedonia. It couldn’t just be Macedonia. It’s also one reason for the huge development of national symbols in Skopje. Especially the imposing statue of a man on horseback. It isn’t officially said to depict Alexander The Great, but it’s a fairly striking resemblance to the historical figure, and a development of a Macedonian history that the people can claim as their own- not simply a history as part of another Empire. 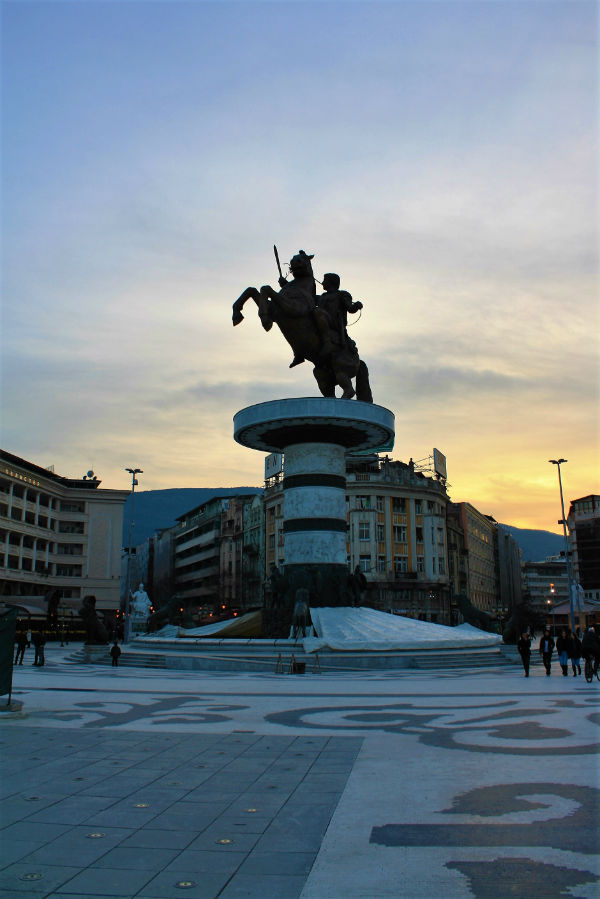 Skopje is an old city, but the need for a national narrative to cement the young country’s position in the Balkans as an independent nation, not a province or region of a neighbouring country, has caused a huge redesign of the city. This means that unfortunately for the time being, the city centre itself is a bit of a mess of construction. It’s a work in progress, and among locals it’s a question of fierce debate whether the huge sums of money ploughed into the huge projects for the sake of nationalism are worth the cost when Macedonia is still one of the poorest nations in Europe, and given the recent ethnic conflicts in the Balkans, it’s another question altogether if Macedonia should be provoking these tensions across its borders. 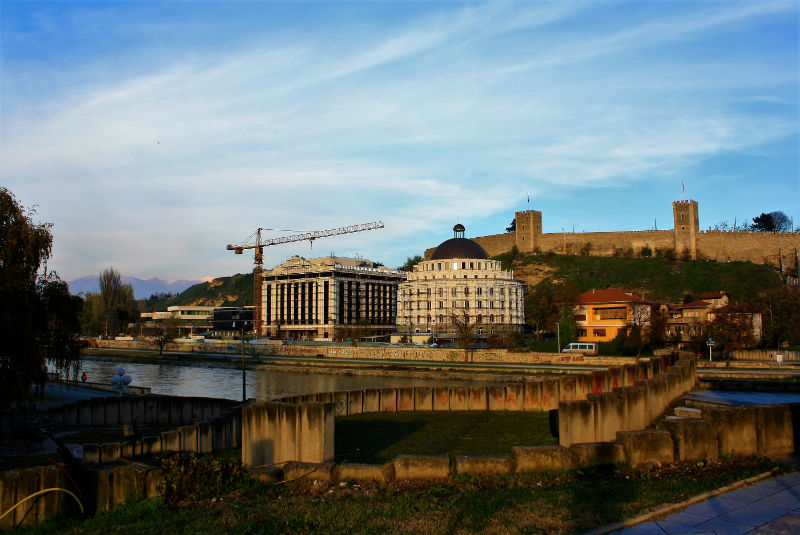 The vision is grand though, and the project has seen the reconstruction of the old bridges which have stood for centuries across the river, including The Stone Bridge, originally built by Byzantine Emperor Justinian in the 6th Century AD. 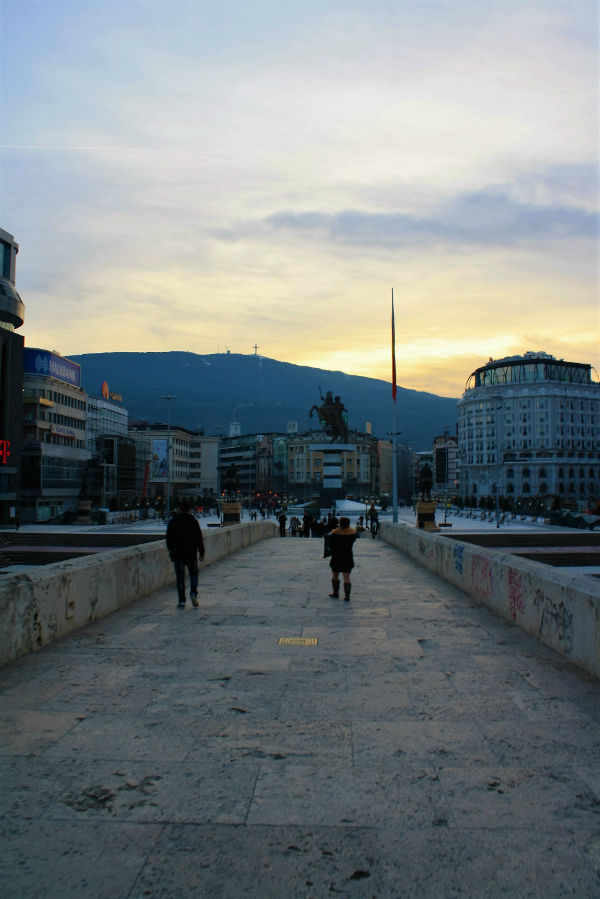 The huge statues make for a somewhat intimidating walk through the centre, but they certainly give Skopje a unique look. They are impressive in their own right, if a bit excessive. But there isn’t a much better way to assert nationhood than through enormous statues. 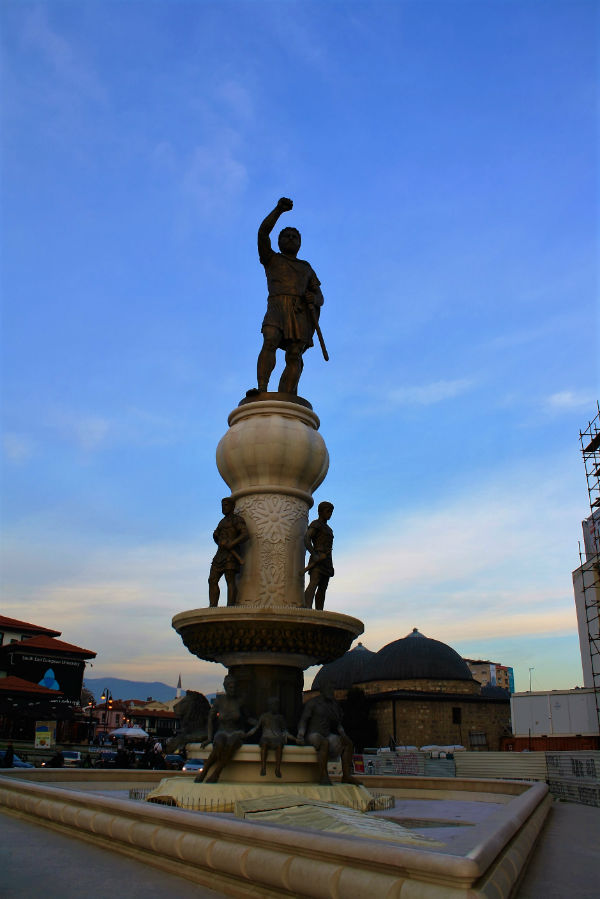 Above the city stands the Kale Fortress, which has stood guard over Skopje for centuries and offers commanding views of the city of statues below it. 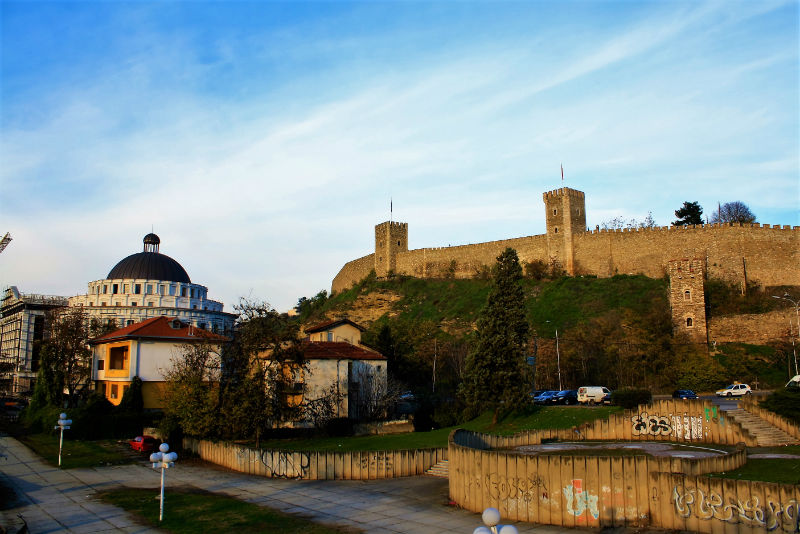 And for a different flavour there’s the Ottoman influenced Old Town Bazaar, home to the mosques, hammams and a few decent bars too. Unlike the city centre, this area isn’t under massive construction either, although they’ve still erected a few big statues here too. 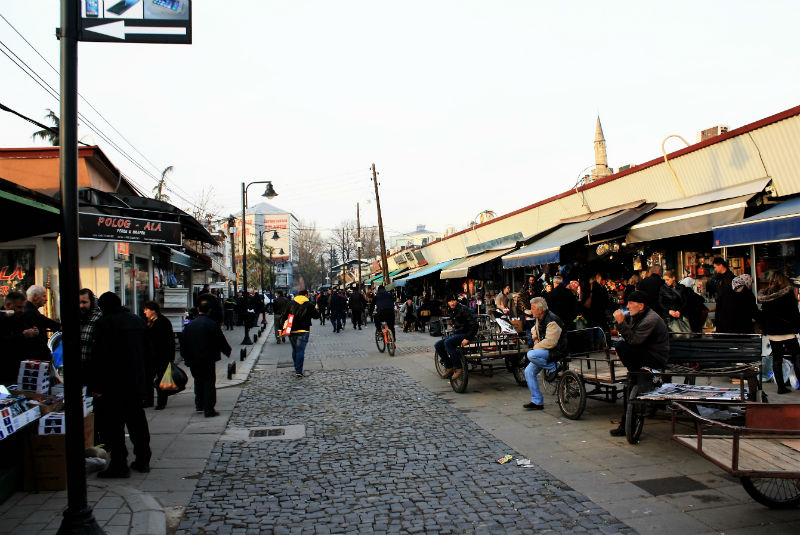 Skopje is on the rise. It’s a city of monuments and nationalist constructions, but below the boasting and the show of pride there’s a charming city with a long and important history, at the centre of a young nation which is simply trying to find its place in Europe. 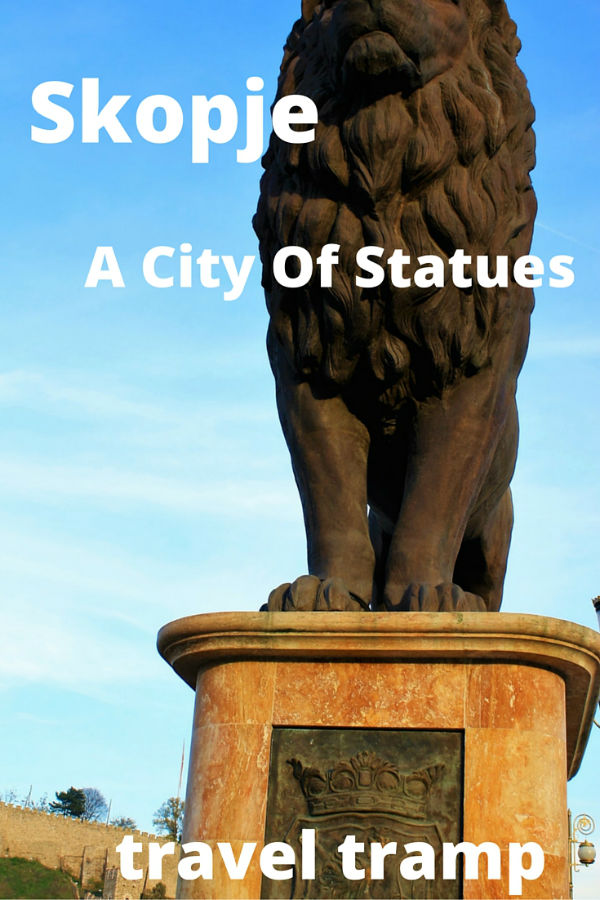 For travel advice to Macedonia, then check out Wiki Travel!