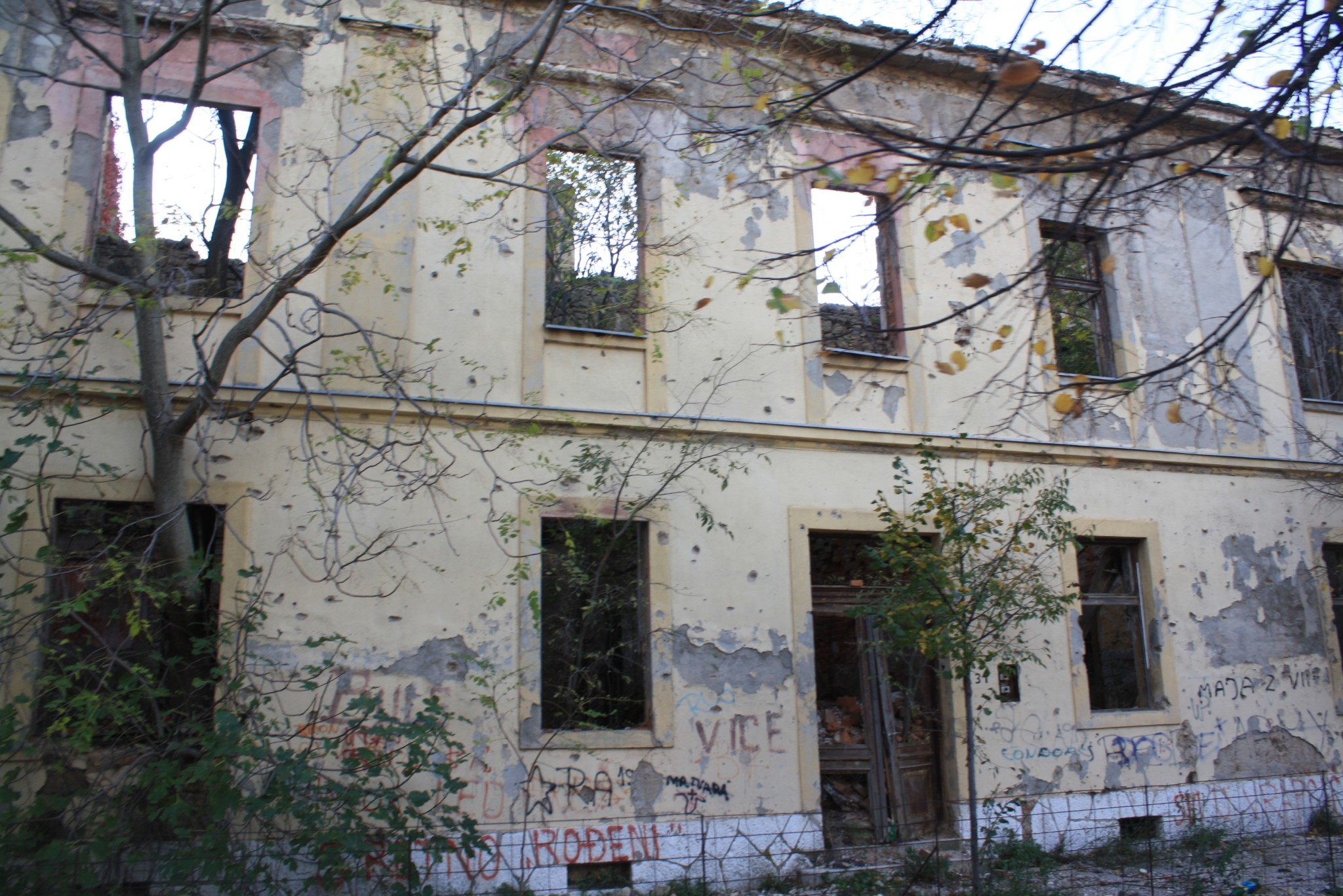 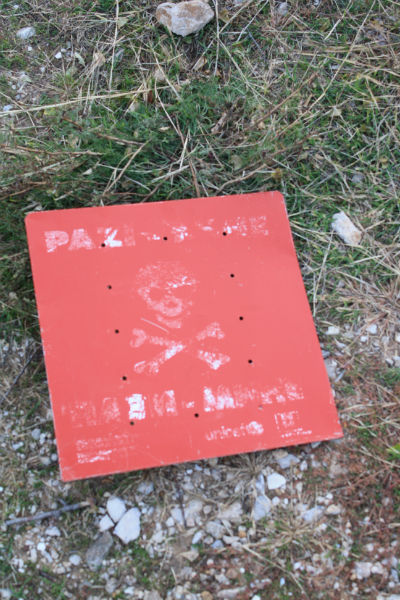 Bosnia and Herzegovina is a country visibly ravaged by the wars which saw the death of Yugoslavia. The streets of cities, towns and villages from Sarajevo to Mostar bear the signs of conflict even twenty years on, and none more so than Mostar. The city’s Bosnian, Croatian and Serbian populations had lived together peacefully for years, but as nationalism took hold in the 1990’s, bloodshed soon followed. This would become the most bombed city in the Bosnian war. 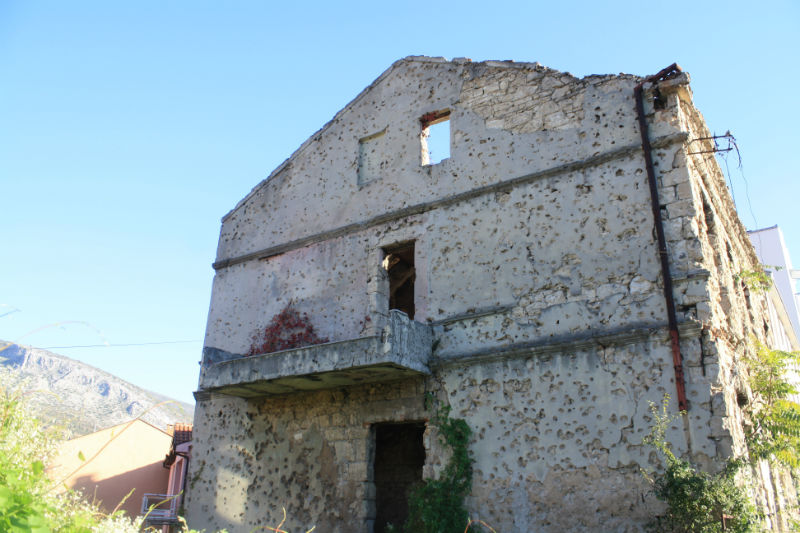 A bullet riddled house in Mostar

Miran is a local Bosnian man, and as a teenager he witnessed first hand the fighting for Mostar during the war that ravaged Bosnia and Herzegovina after the country declared independence from Yugoslavia in 1992. He witnessed the fight for his own home, and for his own nations existence. 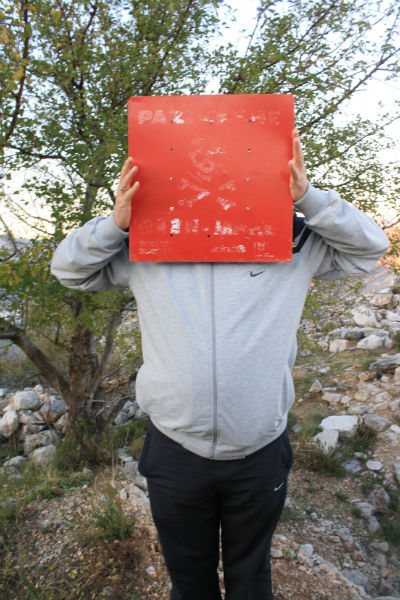 Now he was showing us the front lines. We were on the mountainside that overlooks the entire city. From here, Mostar was besieged and fought over by the different ethnic groups involved in the conflict, from 1992-94. 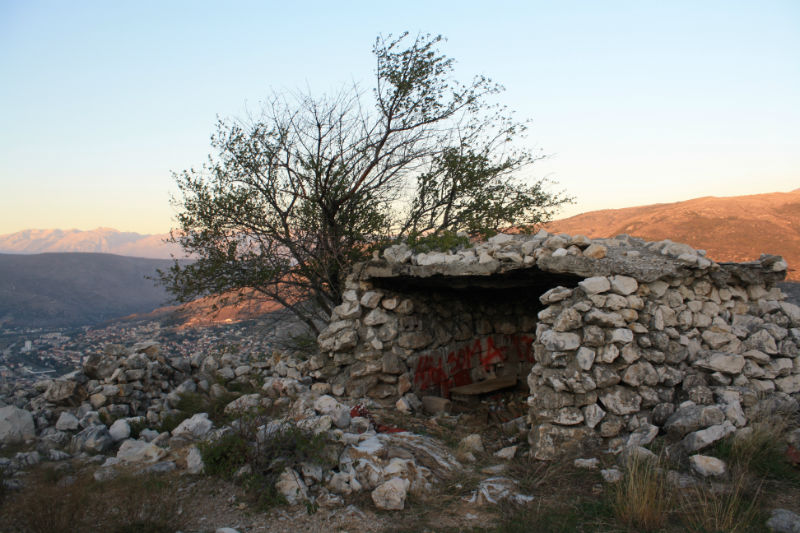 As we stood by the remnants of a Croatian bunker that was used to fire down upon Mostar, Miran explains that when war first broke out, Serbian troops came to his house and forced his family out and across the river, to the Bosnian side. Croatian and Bosnian forces then allied together to force out the Serbians, but then the Croatian’s occupied this mountain side, and turned on their Bosnian comrades, as they tried to take the city for themselves. Mostar was besieged and divided along ethnic lines. 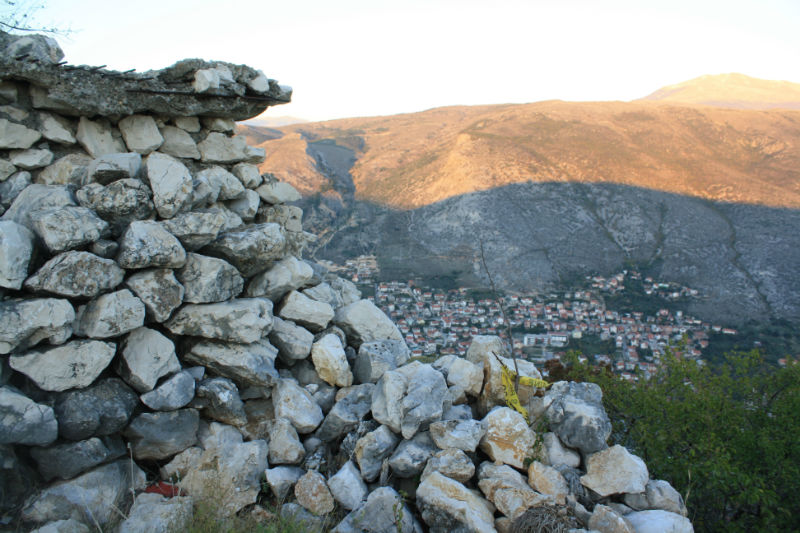 Mostar is famous for its Old Bridge, the Stari Most. 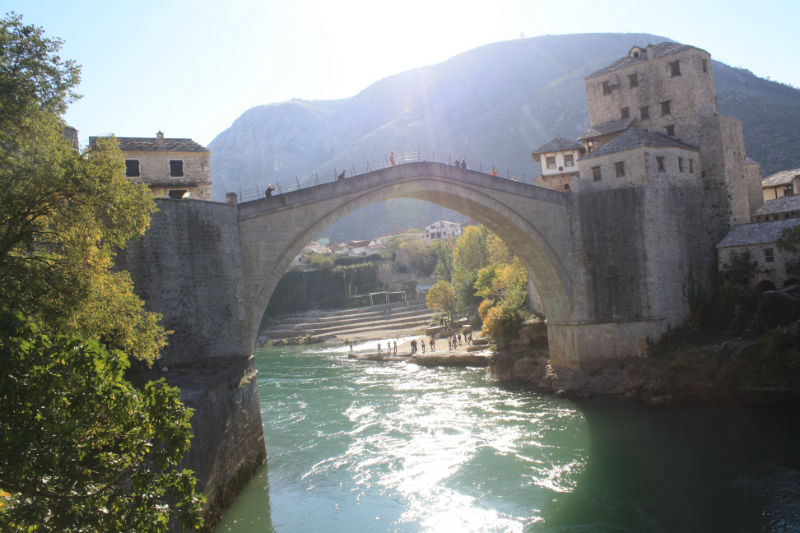 This 15th Century Ottoman era bridge was destroyed completely by Croatian forces firing from the same mountain top we were now walking along. Below we could see the perfect range of fire the tanks and artillery had to target the landmark. Its destruction was symbolic of the strife of Mostar, cutting the East and West sides of the city apart. After the war it was painstakingly rebuilt brick by brick from the rubble, and once again it stands tall, uniting the two sides across the Neretva River. 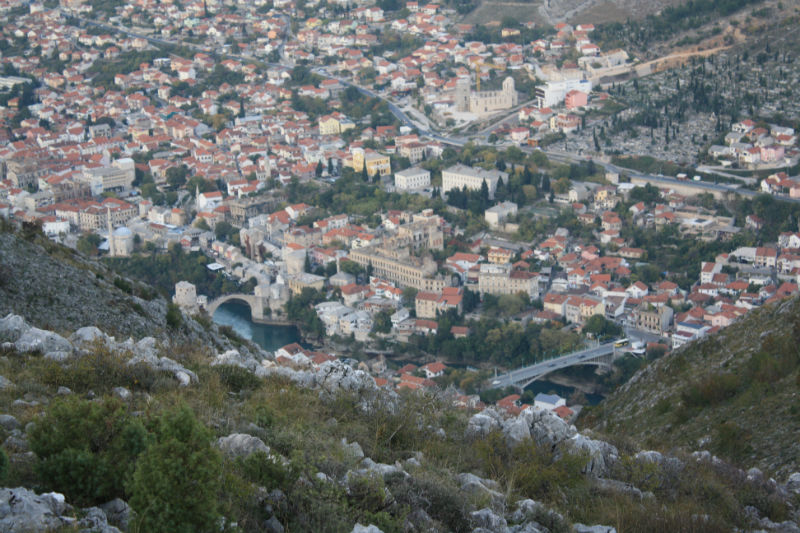 Next to the bunker we were huddled under were memorials to three Croatian soldiers. Miran described how this position was targeted by Bosnian rocket strikes from the other side of the valley, and was completely annihilated after the destruction of the old bridge. Every side suffered in this war. 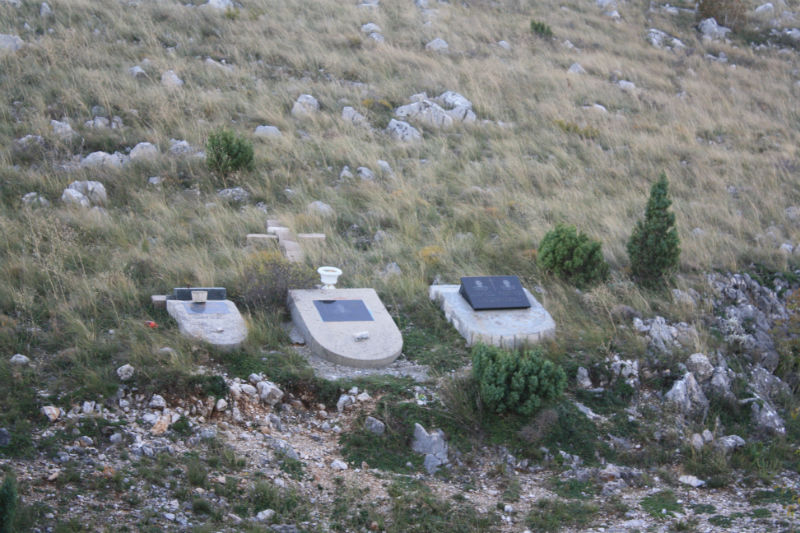 Across the hill the remnants of war still littered the area. Old bunkers, pieces of shrapnel and rusting bullet cases. Most dangerous of all are the mines. Even years on the hillside is still far from clear. Red zones surrounded us. Miran was trained as a minesweeper during his army service, and he said they simply didn’t have the resources or money to remove all the explosives. Instead they would just mark the areas which hadn’t been cleared yet. Red zones were the most dangerous. 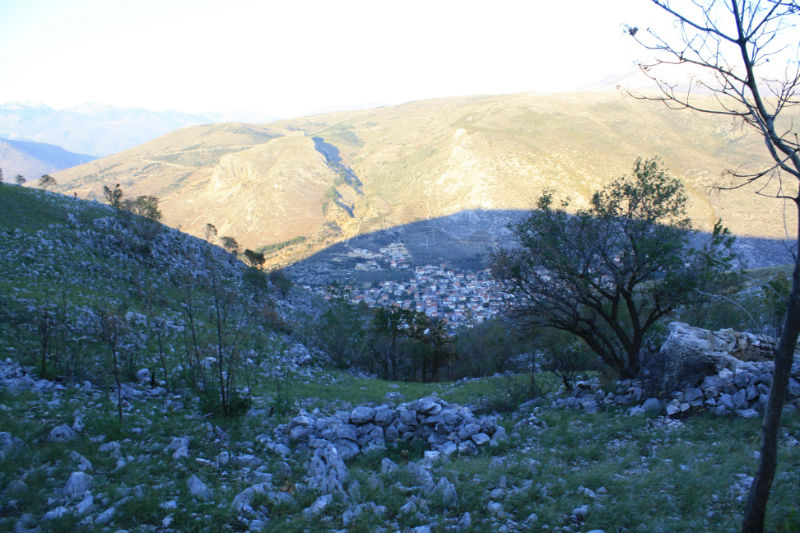 In Mostar itself, the scars of war are all too visible as well. Just like in Sarajevo, there’s barely a single building which wasn’t at some point hit by artillery or machine gun fire. 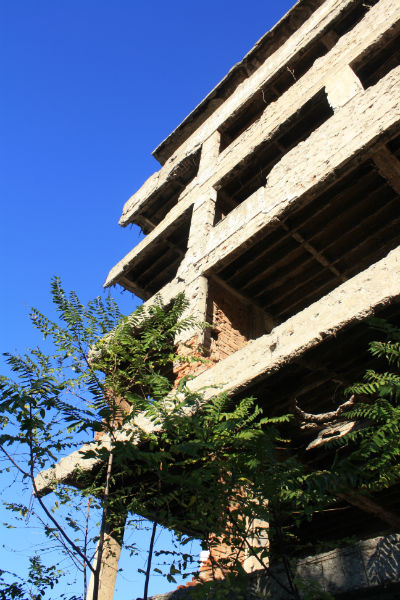 Miran showed us his own home, and the shrapnel scars from rocket propelled grenades which detonated on the walls and in the street. As a teenager he had to learn to live a life under siege. 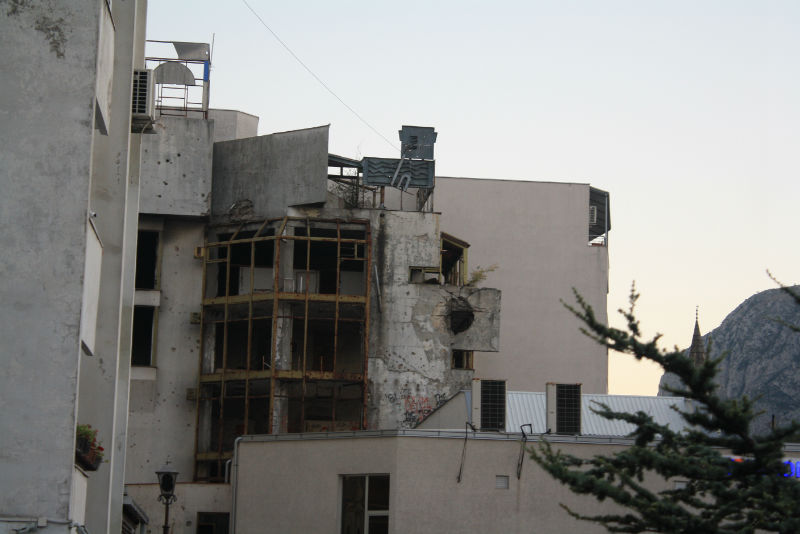 The front line in the city ran roughly along the river. After the Serbian forces were ejected, eventually the Croatian forces came to occupy the West bank while the Bosnians held the East. 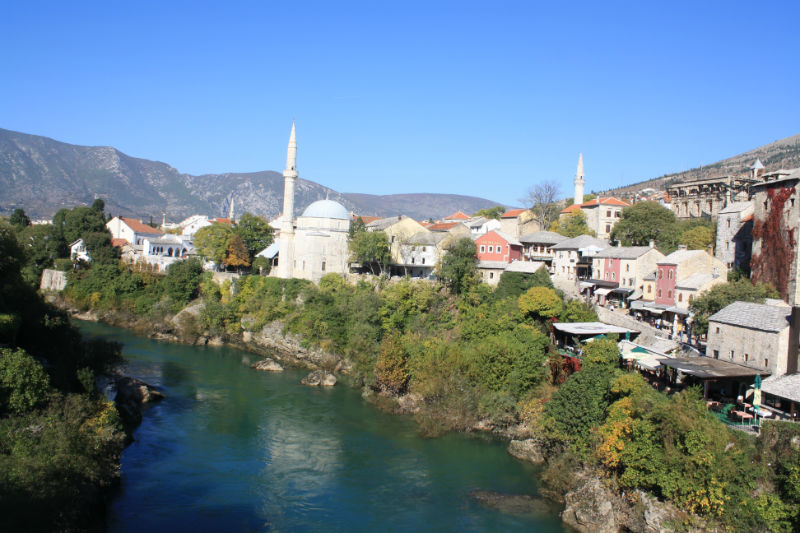 The Bosnians also clung onto a small foothold of land on the West side of the river too, and it was here that we walked along the former positions. The majority of the buildings on the street are still abandoned and battle scarred. There’s even a school in amongst the ruined buildings, and Miran gets angry when he fumes at how little reconstruction has actually been completed in Mostar in the years since the peace agreements. 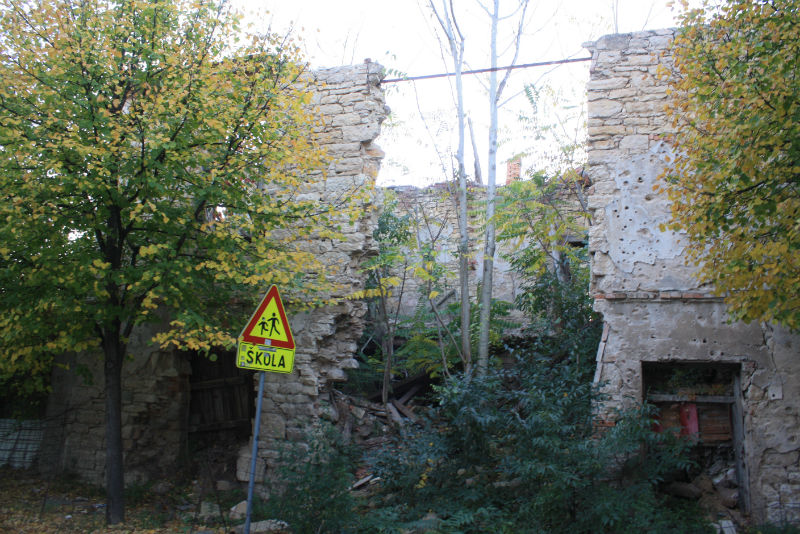 Looking up at the hills we had been walking on earlier, it’s easy to see how nowhere in the city was safe from fire. The shopping centre on the Bosnian side, once seven storeys high, was hit every day, continuously until it completely collapsed. 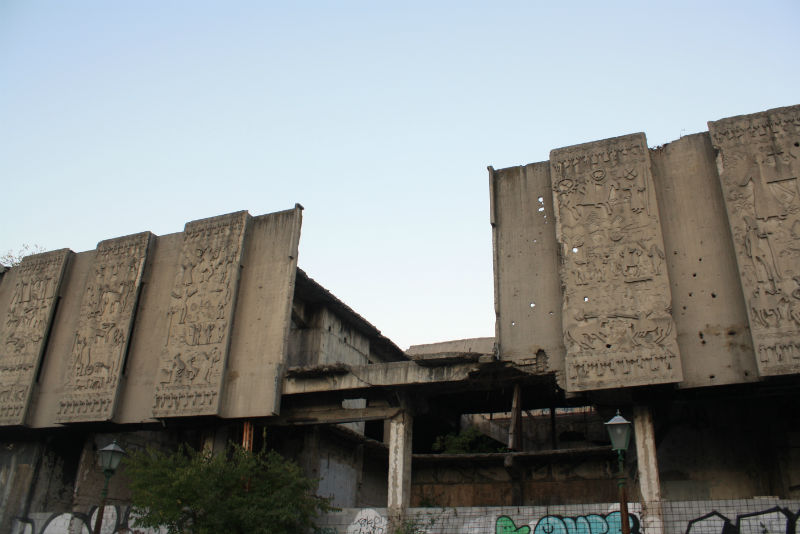 On the Croatian side of the river, the harrowing Sniper Tower casts a shadow over the whole city. Nowhere in Mostar was safe, no matter which side you were on. 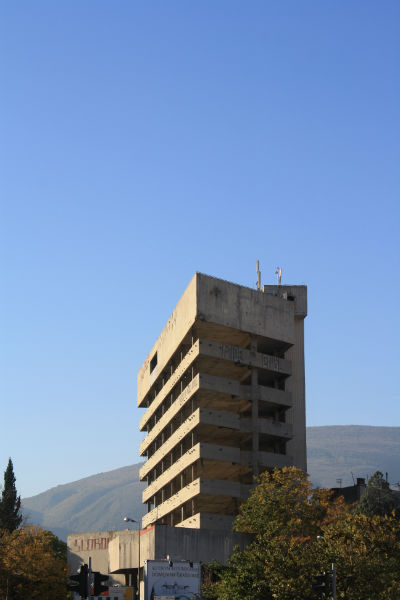 Miran says we should talk about the war. Some people can’t, but he can, and he feels that he should tell us his stories, his life and his experiences. I get the impression that he has a sense of duty to those who were killed, to his own family members who lost their lives, and a duty to make certain that future generations don’t have to endure the tragedies he did. Under the Sniper Tower there are words of peace spray painted onto the drab concrete, words that express simply the confusion and division caused by the Bosnian war. Words that question the point of the war entirely. 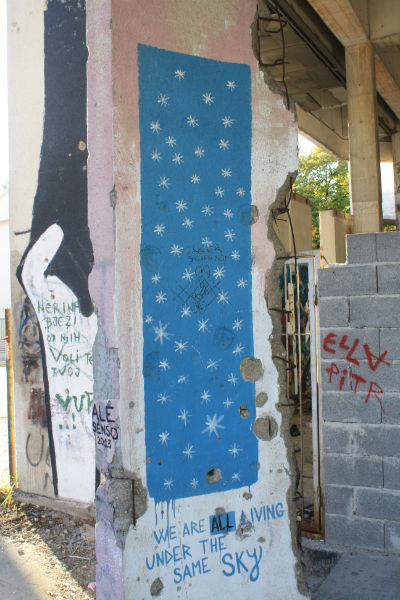 Mostar is still in many ways a divided city. Croatian children are taught a separate syllabus in school, and there are even different bus stations on either side of the river. This isn’t necessarily the way things will continue though. Miran tells me to visit the Bruce Lee statue. I thought he was joking at first, but in a park near the Sniper Tower there does in fact stand a statue of the martial artist himself. After the war, the younger generation from the opposing sides wanted a symbol of unity. Bruce Lee was that symbol. He was loved all over the Balkans, and his universal appeal was a way of bringing the different and divided religions, ethnicities and communities of Bosnia and Herzegovina together again. He is the figure that just might be able to heal the scars of war in Mostar. 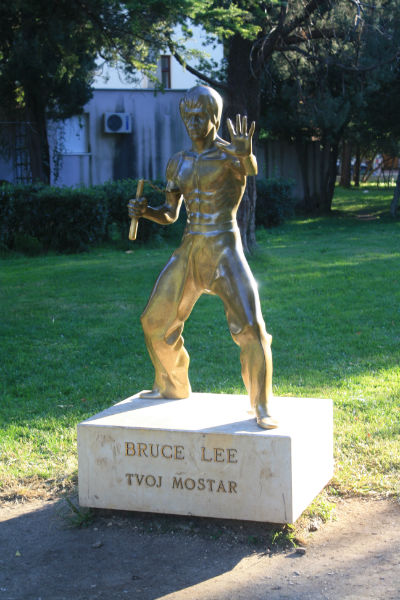 Miran runs an at times emotional yet always detailed tour from his hostel in Mostar. He’s local, and he lived through everything that happened here.

You can also check out the secret Yugoslav airbase built into the side of a mountain on the orders of Joseph Tito himself. It’s just outside Mostar.