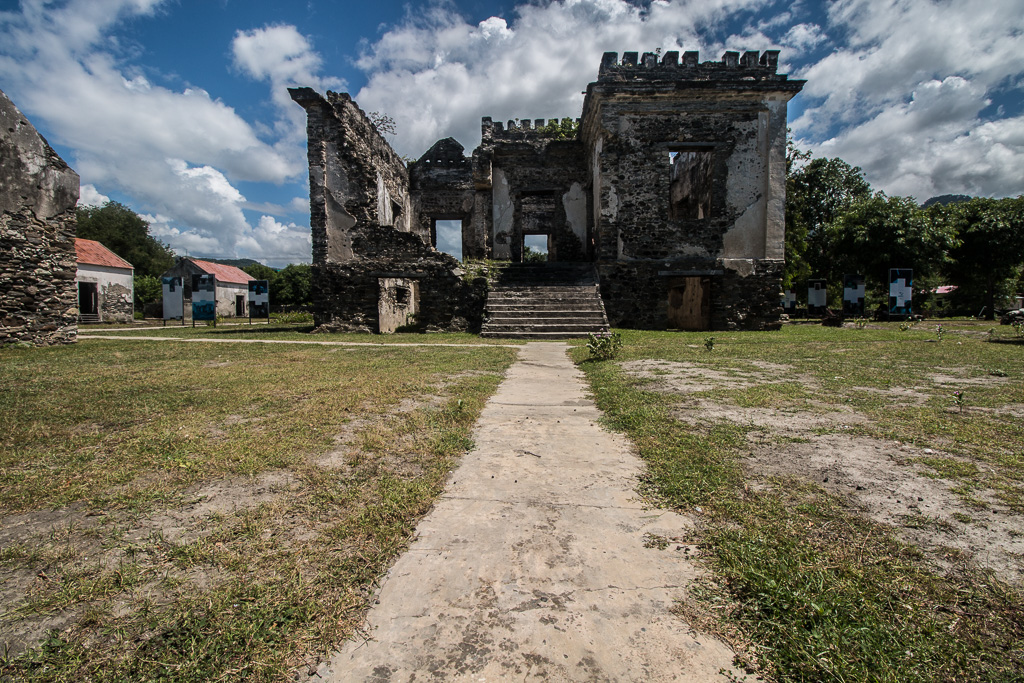 The crumbling ruins of the Ai Pelo Prison in East Timor stare hauntingly out to sea on the windswept coast twenty five kilometres west from Dili.

This stone walled and weather beaten prison is a colonial stain on the landscape, a place built by the Portuguese to house dissidents and criminals, the dark memories of which are still fervently avoided by the locals today.

I stumbled across Ai Pelo during my travels across East Timor. Travelling from Dili west along the coast, and I went into these ruins to learn more about this colonial legacy. 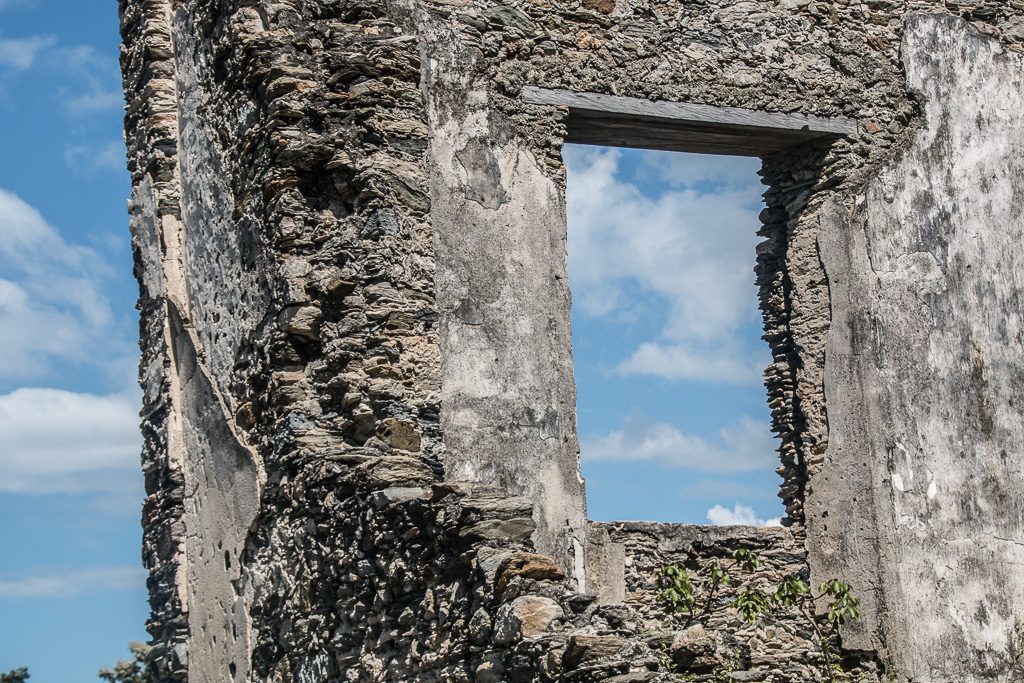 From Dili To The Ai Pelo Prison

I left Dili on a rented motorcycle to explore the coastline to the west of East Timor’s capital city. I travelled through the city’s sprawling suburbs, along the country’s only highway. The coastal road eventually leads to the border with Indonesia, and the further I got from Dili the more rural the villages and landscapes became.

The coastline was flat here, stretching uninterrupted for miles, dotted with sandy beaches and palm trees, with fishing boats trawling the waters and locals walking or riding between villages.

After an hour of slow riding and a few photo stops along the coast, a crude brown tourist sign erected by the Ministry of Tourism and Culture appeared on the side of the road. It was pointing to the beach, with the words Ai Pelu Prison advertised across it.

A few hundred metres away I could see high stone walls, dishevelled and misshaped and with my curiosity engaged, I parked the motorcycle and walked over to investigate.

East Timor is a country that’s barely been influenced or touched at all by tourism, and because of this it’s difficult to find much information about anything. I was travelling along the coast, without any real intentions on a day trip from Dili, simply seeing what I ran into. The Ai Pelo Prison, despite its magnificent brown tourist sign, wasn’t something I’d seen advertised as an attraction anywhere else already which made its sudden appearance on the side of the road all the more intriguing.

When I made it over to the stone wall that surrounded the ruined buildings, I found the gate securely locked, and hopping over I found that there were a few information signs, but all of the information was in fading Portuguese. 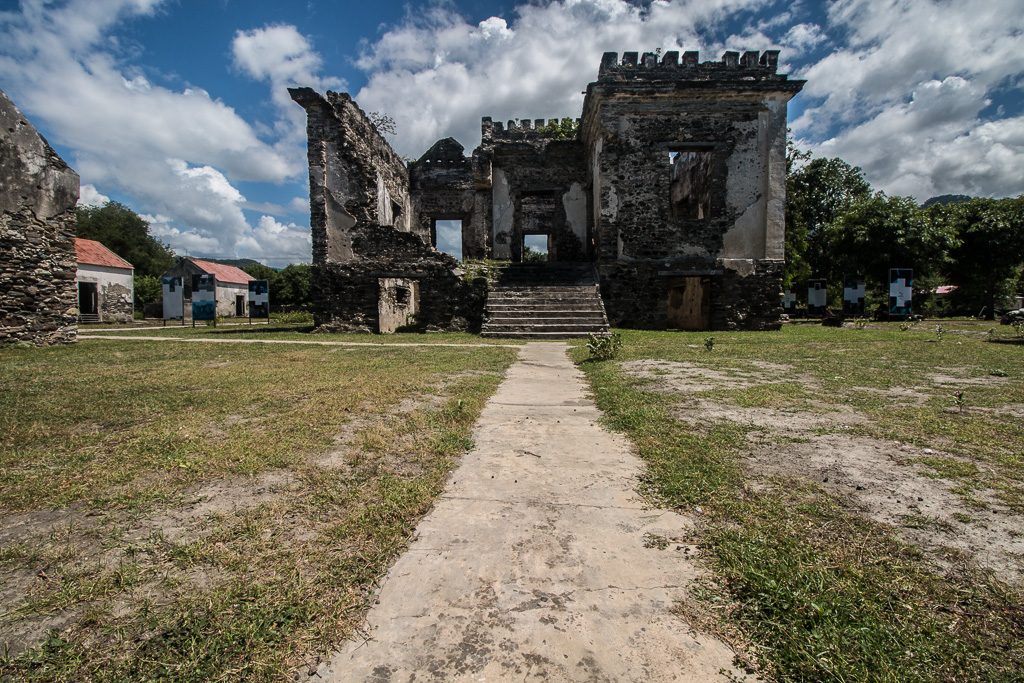 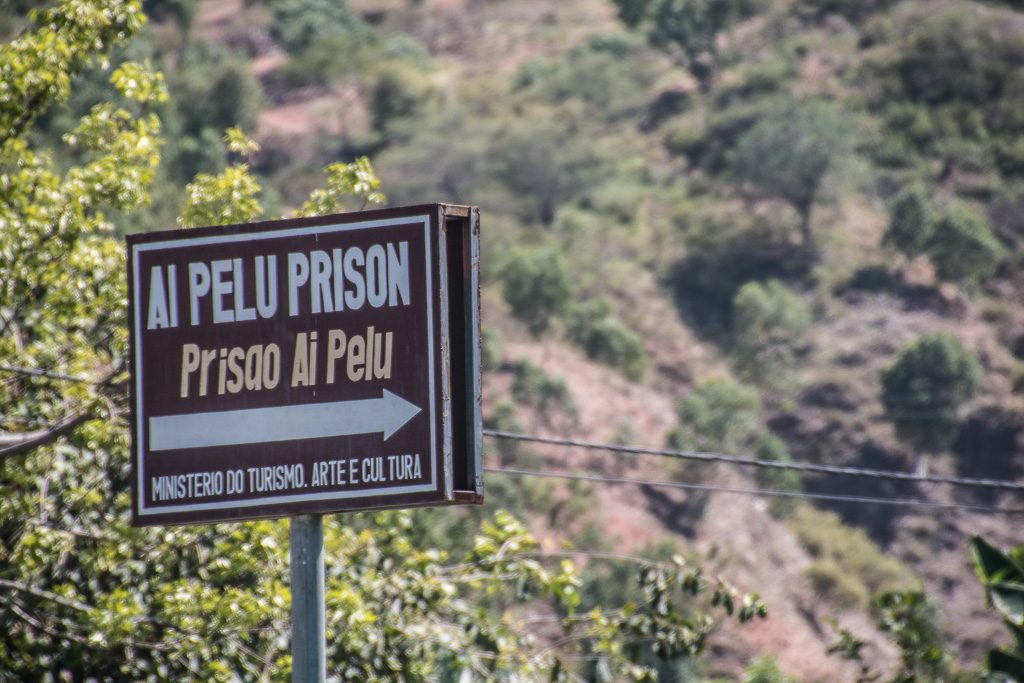 The stone ruins face out to sea. A tall multi story building stood in the centre of the grassy compound. The inside was gutted, windows long gone and any floors removed or destroyed. A herd of goats ran wild through the doorways, sheltering from the sun in the shade of the prison walls.

Either side of the tall central building stood long, uniform, barrack like structures, probably the main holding cells for the prisoners who would have been sent here.

The setting was strangely picturesque and disconcertingly quiet. What I wanted to know though, was who had built this prison and who had been held within its walls? 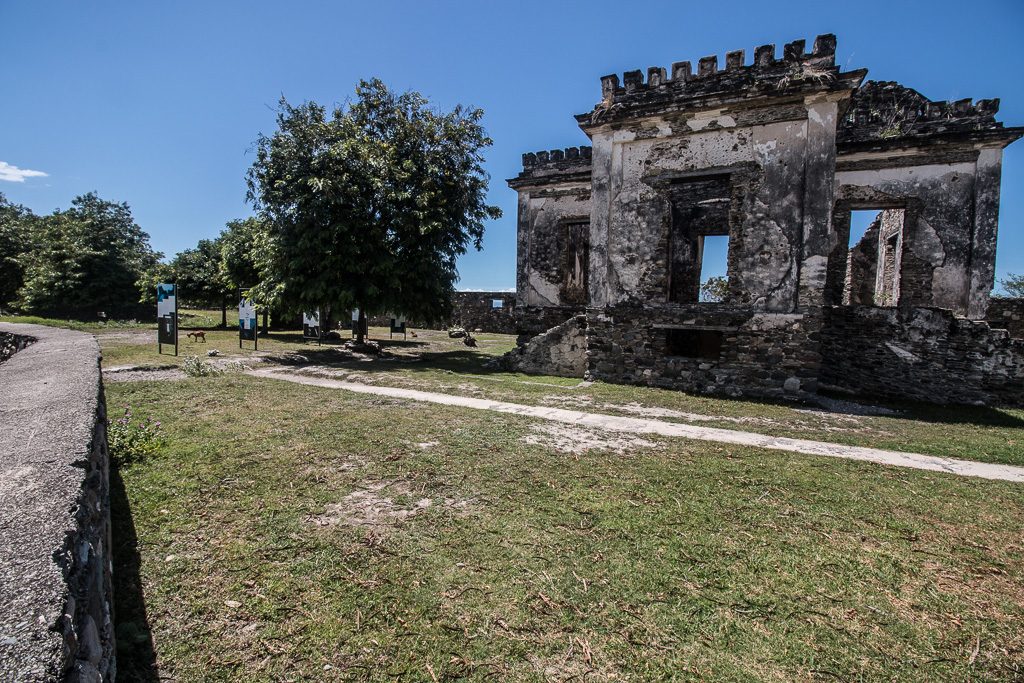 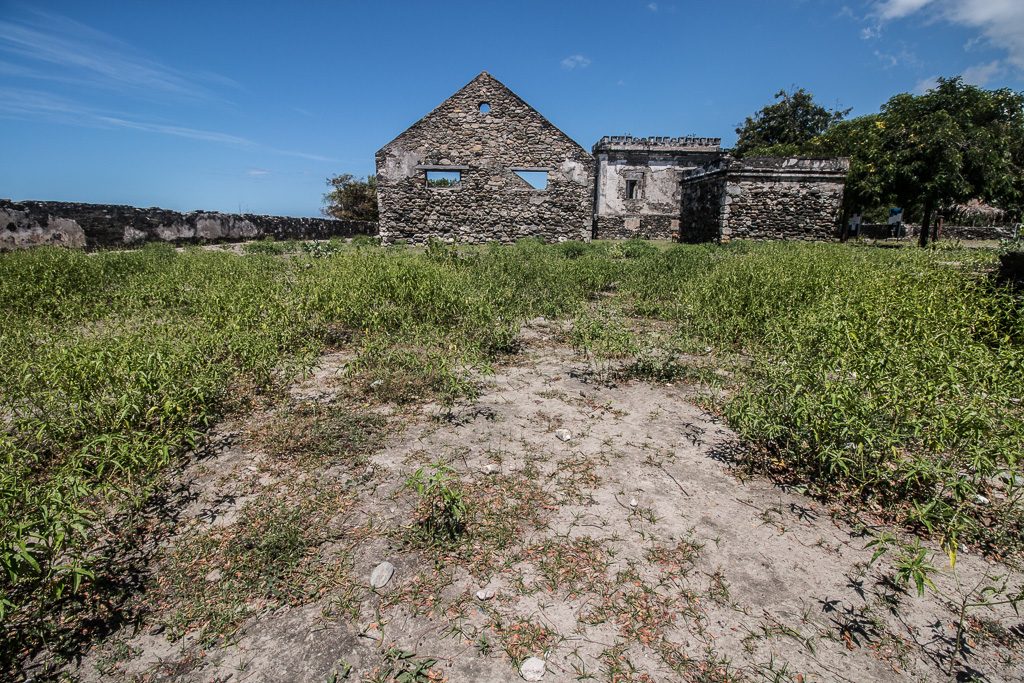 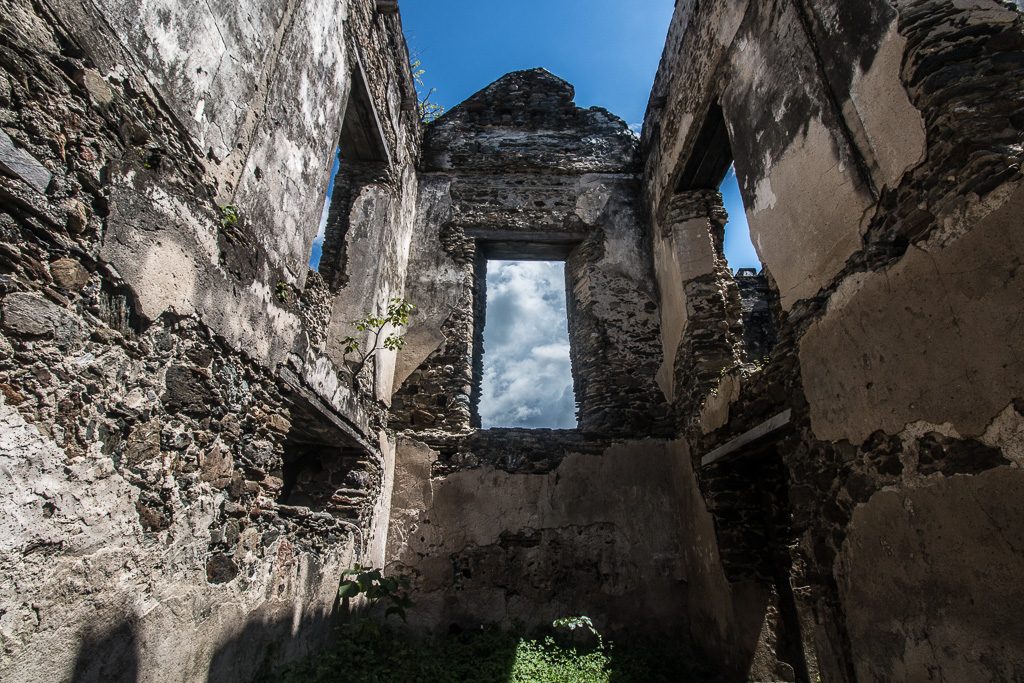 What I could gather from the Portuguese signs spread around the ruins and from a little research later on, is that Ai Pelo was built during the Portuguese colonial days, primarily as a place to send criminals and political dissidents from other parts of Portugal’s empire.

Ai Pelo was built in a remote area along the coast, but close to Liquica, the town which originally served as the Portuguese colonial administration’s capital in East Timor, before this was eventually moved to Dili.

Construction began around 1889, and continued in various stages over the next few decades, being expanded to accommodate more prisoners and more dissidents within its walls.

The Portuguese built the prison to hold not only Timorese criminals and political prisoners, but as a place to which they could send convicts from other parts of their empire, and in particular from Macau. The island of Timor was remote and isolated enough to serve as a far off exile for Portugal’s unwanted criminals. 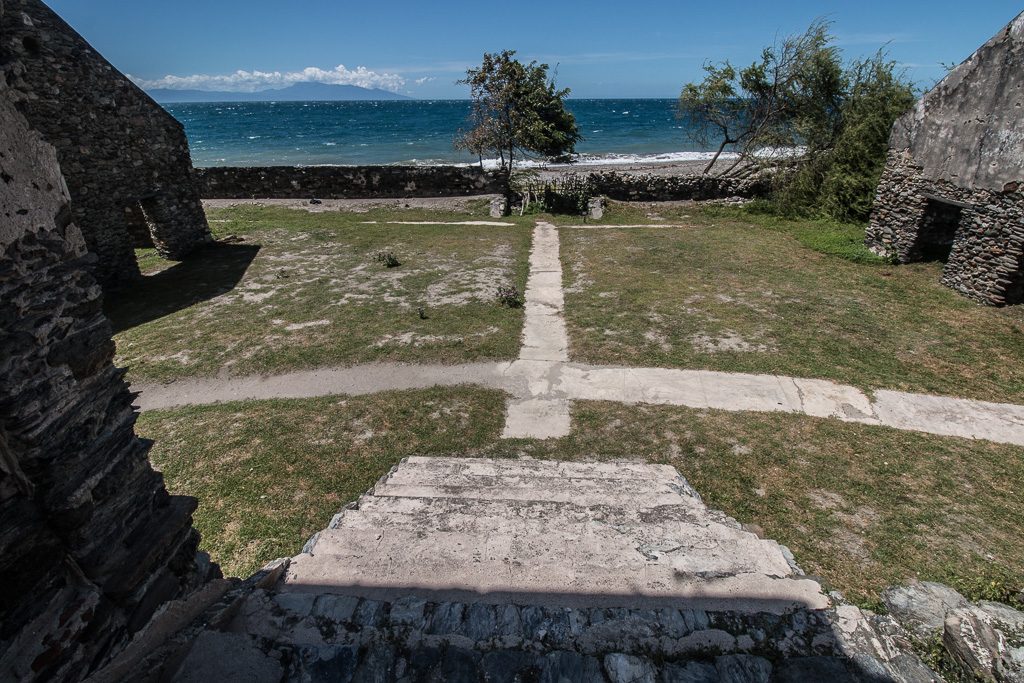 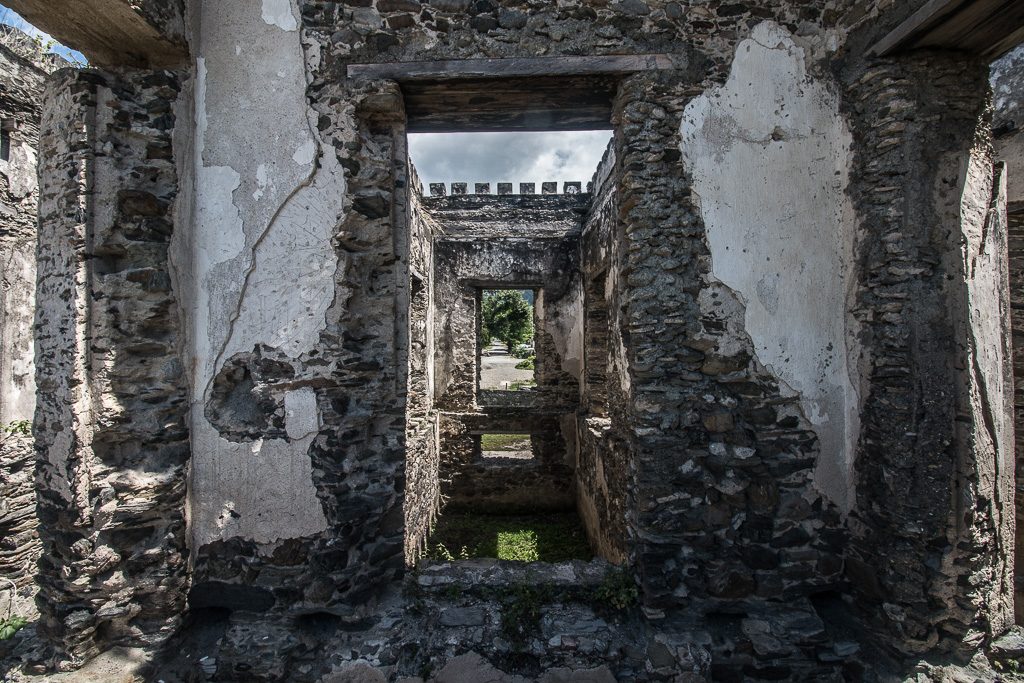 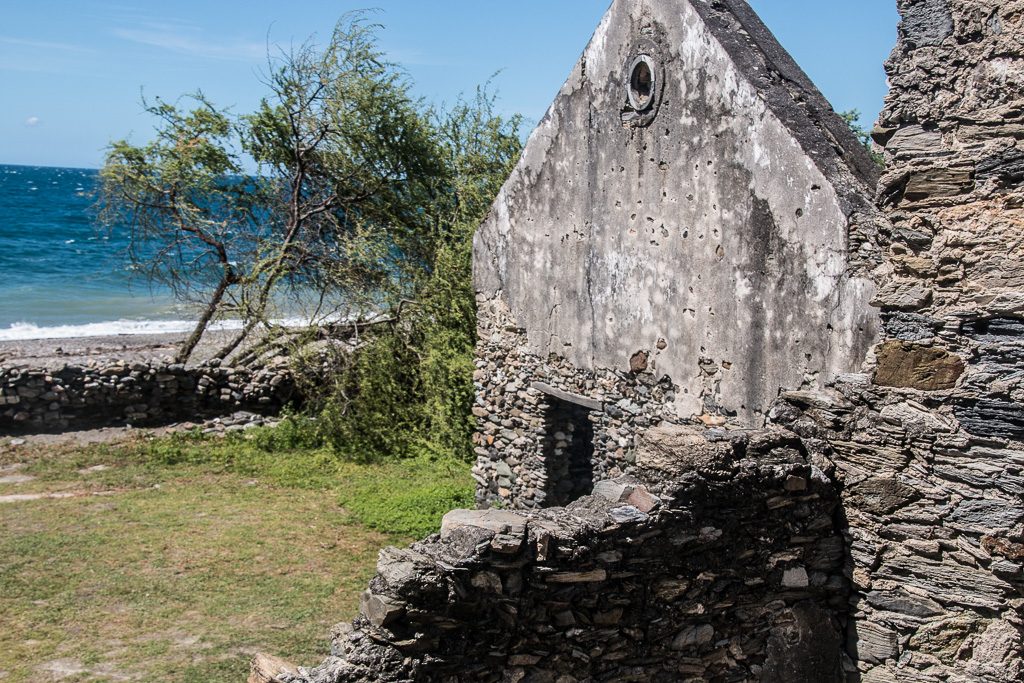 The prison was closed down in 1939 by the Portuguese Government, and in 1942 the Japanese overran Timor and until 1945 occupied the island while Australian and local forces waged a guerrilla war against them.

Ai Pelo became a Japanese Army base, and was eventually bombed by Allied Forces, reducing its walls to the broken state it’s now in.

Since then, it has been abandoned. The locals call the prison Ai Pelo, which means ‘Bitter Water’. The site is associated with dark memories. Prisoners were executed and tortured here and the ruins are a reminder of the brutal effects of colonialism.

It’s an empty, and haunting place. A place of bitter water. 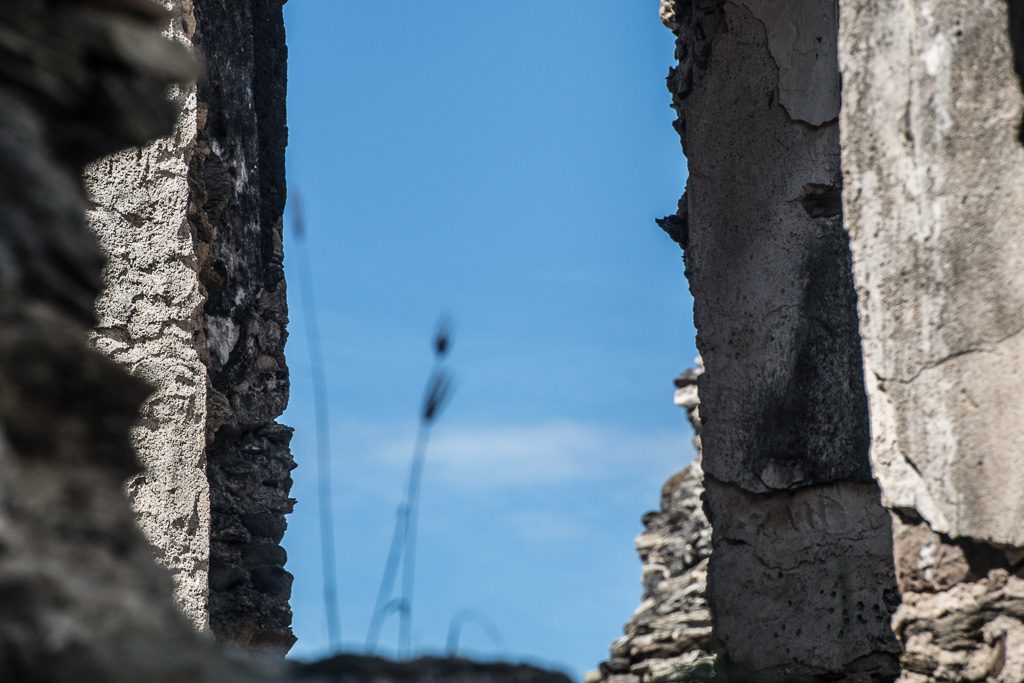 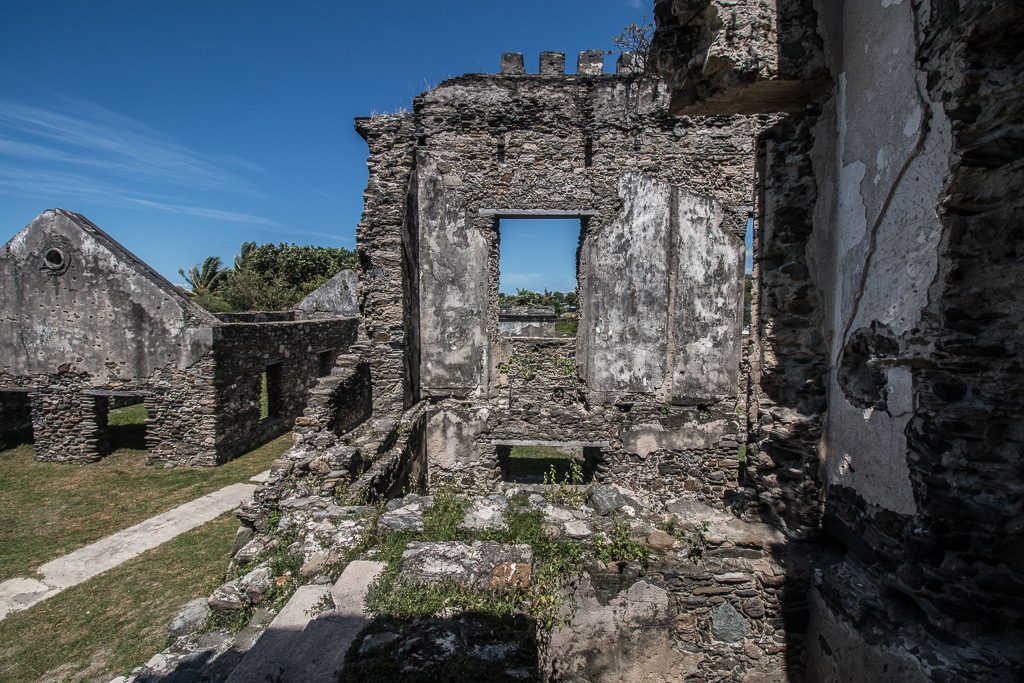 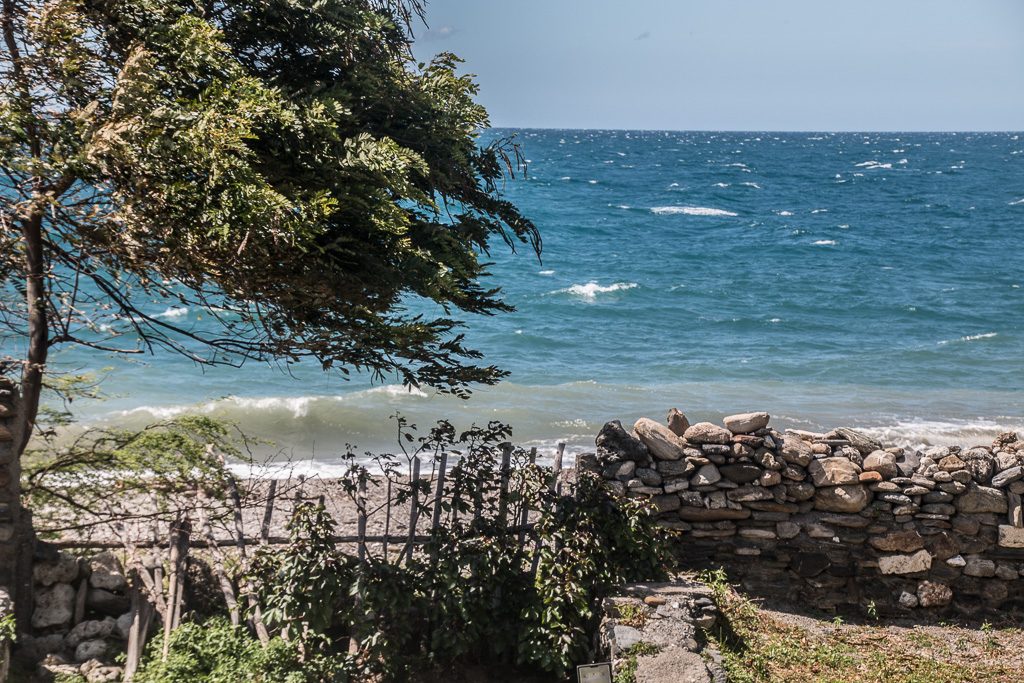 Ai Pelo And The History Of East Timor

After walking through the ruins and along the seafront, eventually a caretaker appeared, opened the gate and asked me to sign his guest book, before leaving again not long after.

The Ministry of Culture and Tourism has gone to some effort to build a sign, and to even construct information boards within the old prison grounds. The walls continue to crumble though and to be seen by few tourists and avoided by locals.

Its history may be dark, but Ai Pelo is a valuable piece of East Timor’s history. The government have recognised this, but don’t seem to advertise this.  It’s a compelling sight to see while in Dili to begin to understand the colonial legacy of hundreds of year of Portuguese rule across the country that continues to this day to effect East Timor’s culture, language and politics. 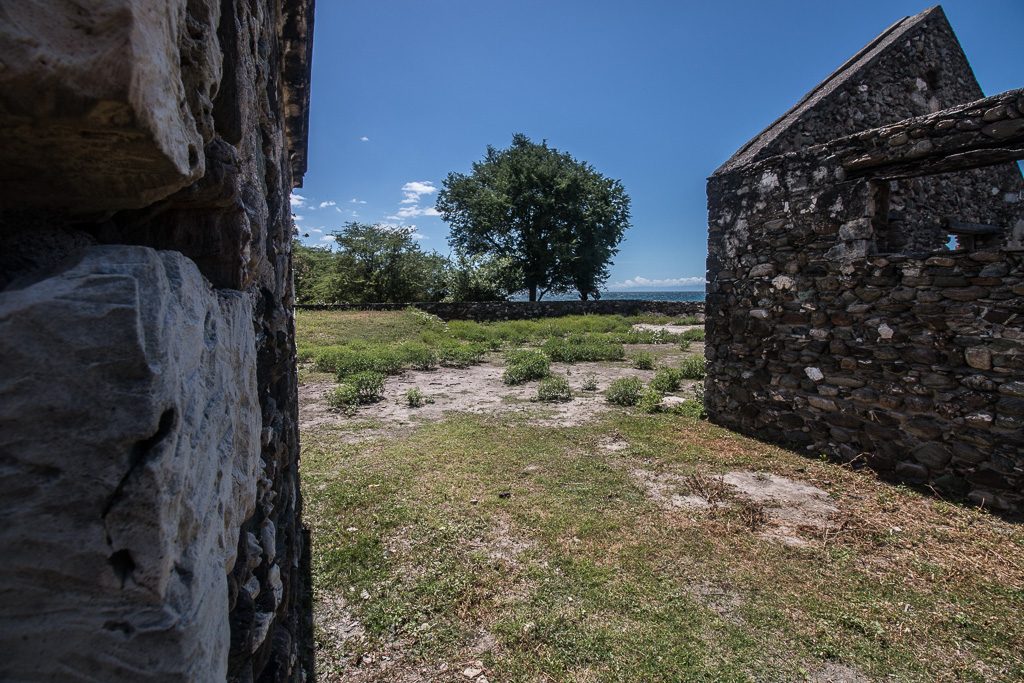 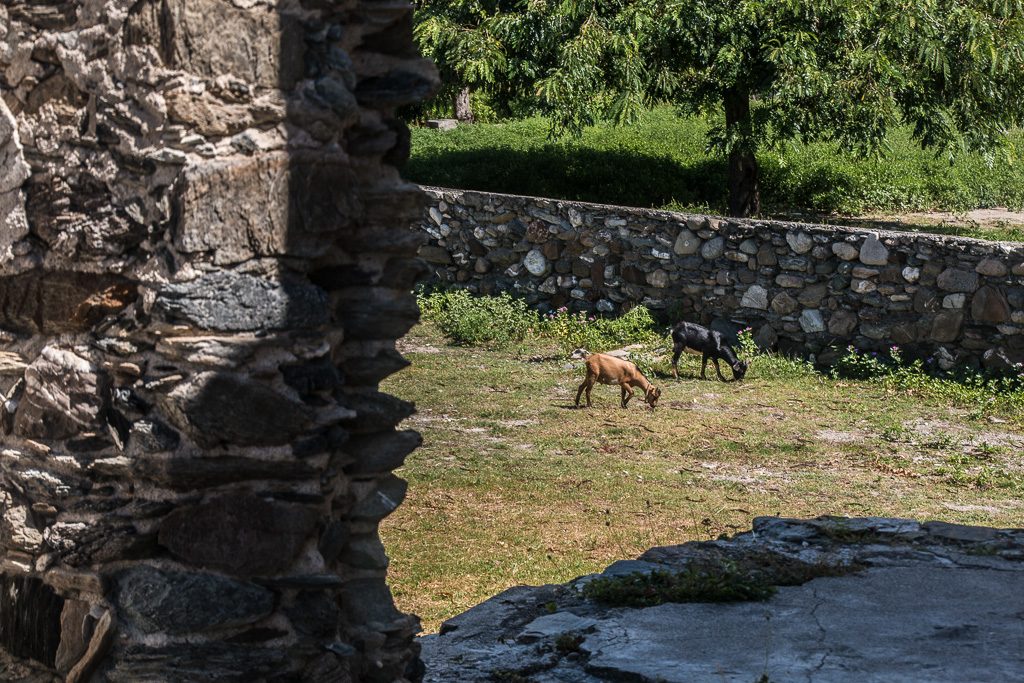 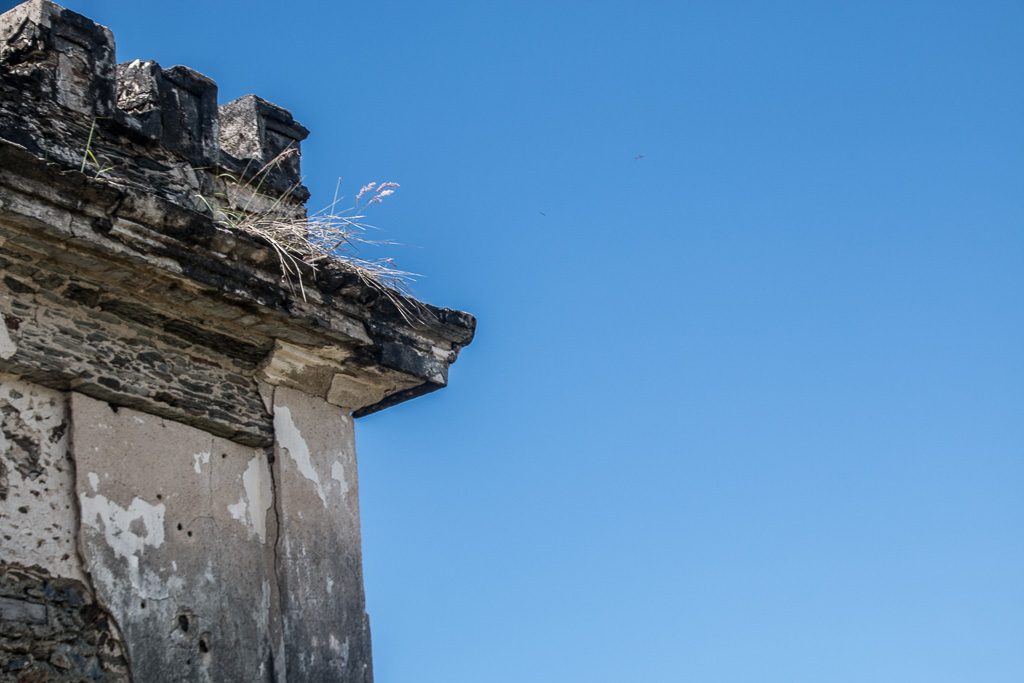 Interested in travelling to the Ai Pelo Prison in East Timor but don’t know where to start or how to get there? Then read on for my quick guide to all things Ai Pelo!

How To Travel To Ai Pelo Prison East Timor

There is little information surrounding Ai Pelo that’s readily available, but despite this it is easy enough to find if you have your own transport.

The ruins are 25 kilometres to the west of Dili, simply travel out of he city along the only highway towards the border with West Timor. You will see a brown sign advertising the location of the prison on the road. Simply stop and walk around.

I rented a motorcycle from Hostel da Terra in Dili – they charged $17 per day, which is the best price right now in the entire country! The only other transport options if not renting a vehicle would be either hitch hiking or hiring a local driver.

Visiting the Ai Pelo Prison ruins is a trip best combined with a tour of the coast west of Dili. There are several other pints of interest further along he coast, including the old Portuguese colonial centre of Liquica and the ruins of a Dutch colonial fort at Maubara.