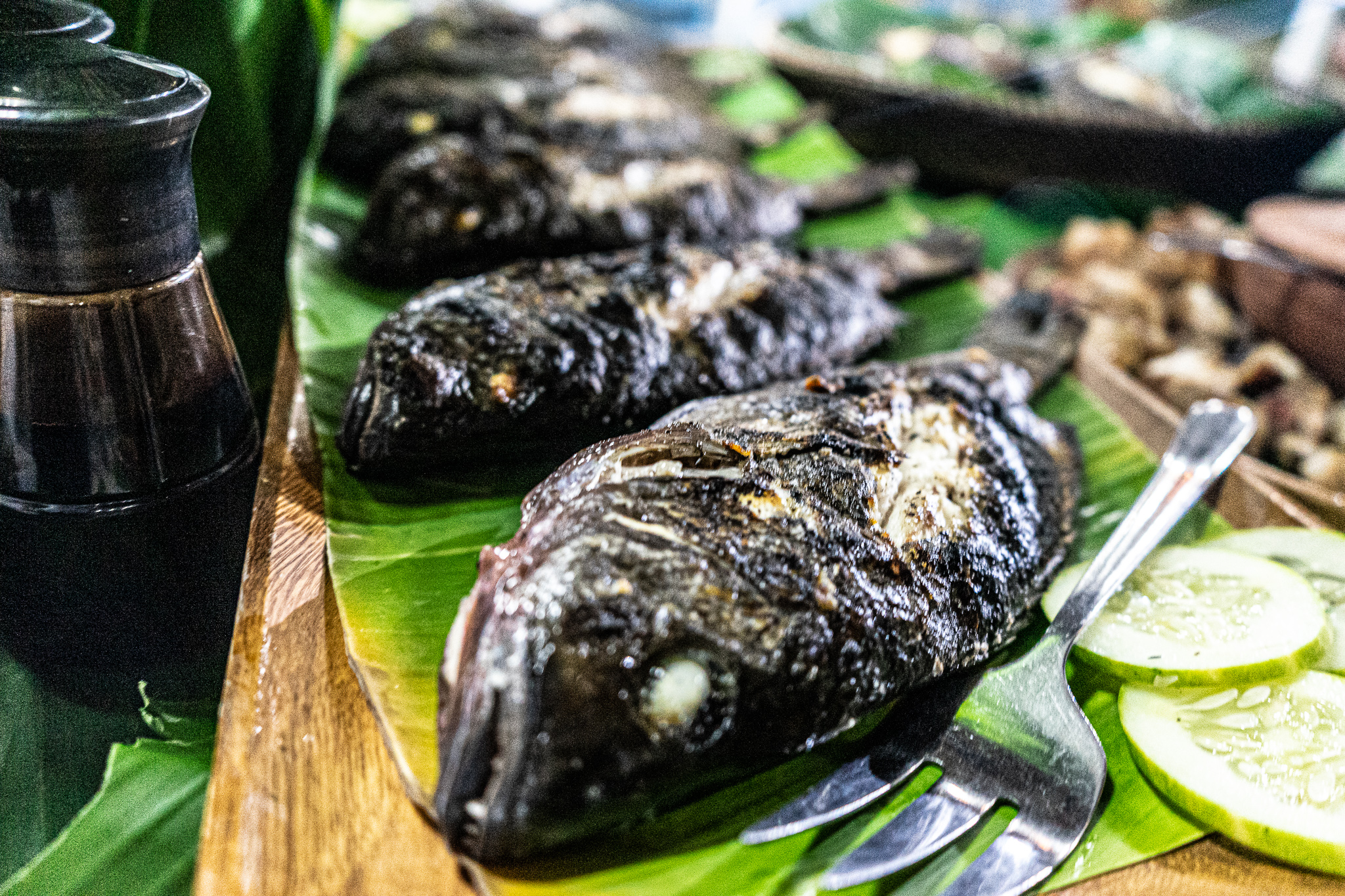 ‘We’ve got the funk’ is loudly playing in the background, as the fish farmers ready their nets on the side of the wooden jetty.

‘We’ve got the fish’, would be more appropriate, but it’s still a strangely fitting song to hear, as the fishermen wade out into the water, and in a well practised, synchronised routine begin to herd the fish towards their nets.

It’s almost mesmerising to watch as the fish begin thrashing around in the shallow water, as the nets draw around them.

This was the daily scene at the Siguin Fish Farm, just one of the many fish farms that make up the huge fishing industry on the Filipino island of Panay. It’s this huge fish cultivation tradition that has led to the city of Roxas being crowned the Seafood Capital of the Philippines.

And I was about to get stuck right in.

Fish and the Philippines

Fish is big business in the Philippines. This is an archipelago of well over 7000 islands, with thousands upon thousands of miles of coastline.

The waters are some of the most biodiverse in the world, being home to everything from whale sharks and turtles to milkfish and sardines.

It’s no wonder then, that the Filipino culinary tradition is closely aligned with the food that can be sourced from the oceans. But with an ever increasing population, as with everywhere else in the world, those once vast fish stocks are of course declining.

But rather than keep taking from the oceans, the fishermen of Roxas began a more sustainable practice, and you can find countless fish farms arrayed along the waterways, lagoons and coastline of the city’s surrounds.

The Catch of the Day

At the Siguin Fish Farm, the fishermen have within minutes rounded up the catch, as the larger fish try heroically to jump over the net meant to trap them.

Taking only the largest, and only enough for the dinner that evening, they throw the smaller ones back and emerge from the water of freshly caught Bangus, or milkfish.

In other pens around the farm, there are a whole range of different species being farmed too, including snappers, and not just the ubiquitous milkfish which always finds its way onto the menu of a Filipino restaurant.

Throwing in some fish feed, the fishermen hand me a long wooden pole with a large net at the end. It seemed that I was also going to help catch the fish of the day.

Of course, it was hardly fishing, and within moments I was lifting out a thrashing milkfish which would be added to the grill and prepared for the seafood feast I’d be enjoying shortly enough.

The Seafood Capital of the Philippines

The feast is prepared at the fish farm, with the freshly caught Bangus being filleted and grilled by the edge of the water.

But there’s more than just Bangus, and I quickly start to realise that perhaps the title of Seafood Capital of the Philippines, is really rather apt for Roxas City.

Laid out Boodle Fight style are a huge range of dishes. Fish cooked in a coconut broth, fish steamed in banana leaves, fish simply grilled on the open coals.

Then there are the oysters, the stuffed squid, the mussels and of course, piles upon piles of prawns and crabs.

The rich fishing grounds here provide an abundance of seafood to Roxas City, but of course, the farmers and fishermen will need to be ever so careful of how they protect that abundance, to ensure its safety for the future.

It’s Not All About the Seafood

But in Roxas, it’s not all about the fish. I’m told that the city is surrounded by rich farming fields too, and that one of the biggest crops that’s grown here is garlic.

While the garlic is a popular addition to the seafood, I’m also told by Roxas locals that it can supposedly help with Hypertension. And with so much seafood being eaten, that can be a problem that needs addressing.

More than its seafood and crops though, Roxas is an important city in the Philippines. After feasting on seafood all evening, the next day I was shown around the historical sights in the city.

Of course, first up was a stop at the dried fish market, where boxes of dried and salted catch can be purchased in bulk. But next up was the local church, one of the oldest churches in the Philippines.

The island of Panay was the second island in the Philippines to be colonised by the Spanish in the 16th century, and the area has a long colonial history. In modern times, the city was renamed for one of its most famous locals, a certain Manuel Roxas who rose to the highest office in the country, and who became the first President of an independent Philippines in the 1940s.

So Long and Thanks For All the Fish

But for most travellers to Roxas, it is all about the seafood, and the city continues to attract tourists from across the Philippines who are drawn here to fill their bellies with everything from Bangus to stuffed squid.

Whether it’s true or not, Roxas City has a firm reputation for cooking up better seafood dishes than anywhere else in the country, and the catches here are so good that tourists will ship home boxes full of fish at the end of their trip.

At the departures area in Roxas City Airport, the faint smell of fish pervades the check-in zone.

Every other item sent into the hold of the plane is a carefully packaged polystyrene box, loaded to bursting with fish, and ready to be shipped back to feed the seafood starved families of Manila.