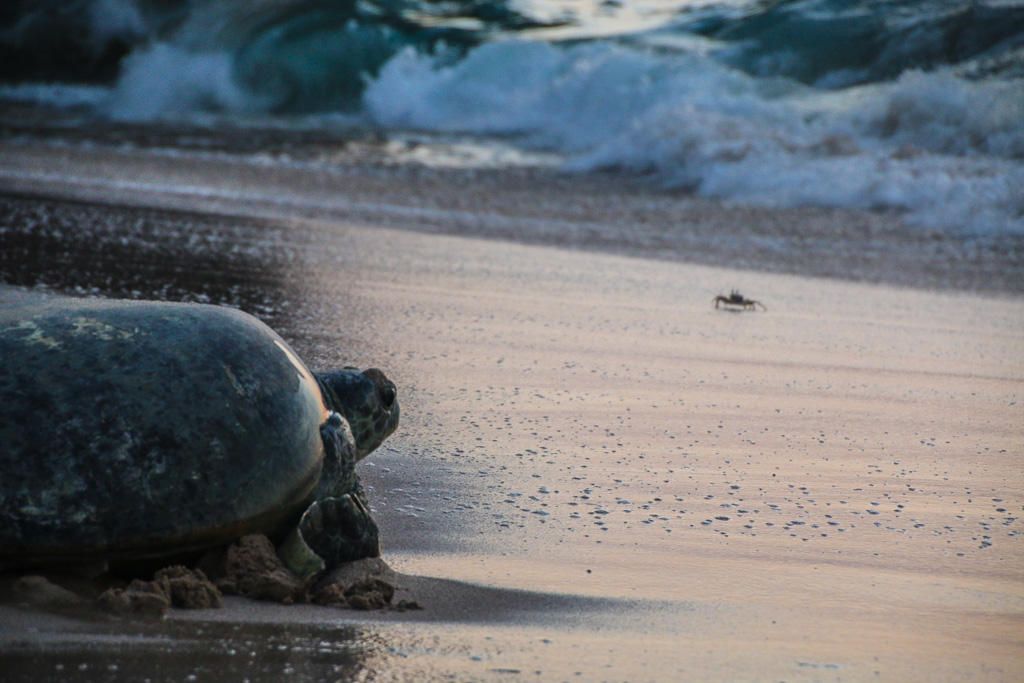 I couldn’t see anything in the pitch dark except for the faint reflection of the moonlight on the waves ahead at the Ras al Jinz Turtle Reserve.

The local Omani guide was intermittently shining his torch, avoiding the huge craters in the sand formed by nesting turtles on the beach.

The guide was looking for the turtles that might still be here, nesting at Ras al Jinz in the early hours of the morning before the sun rose and these marine reptiles made their way quietly back into the ocean. 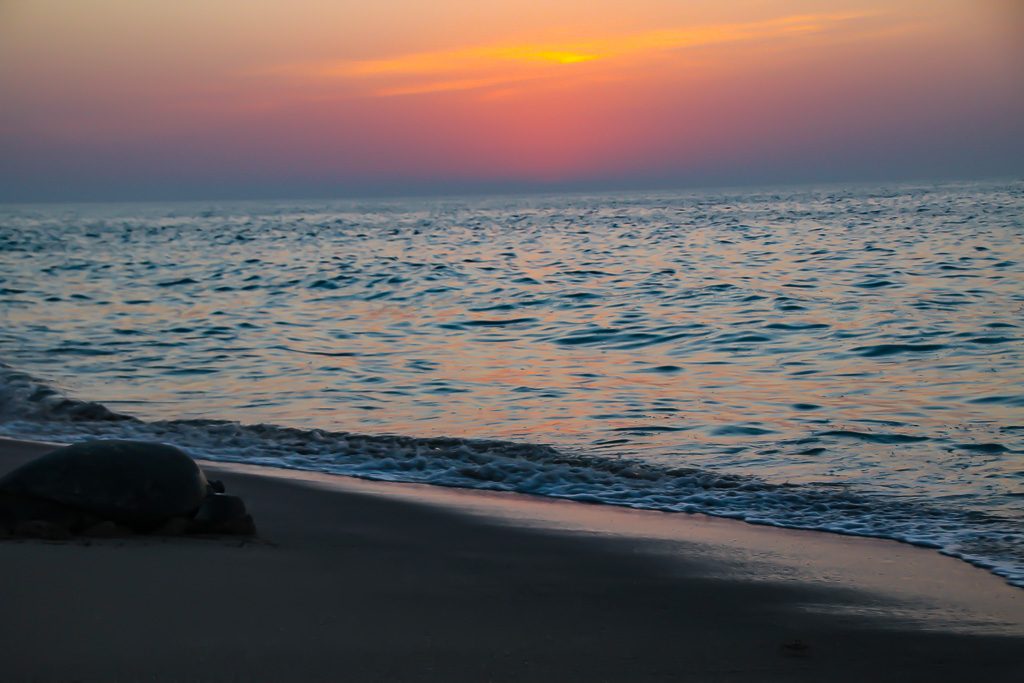 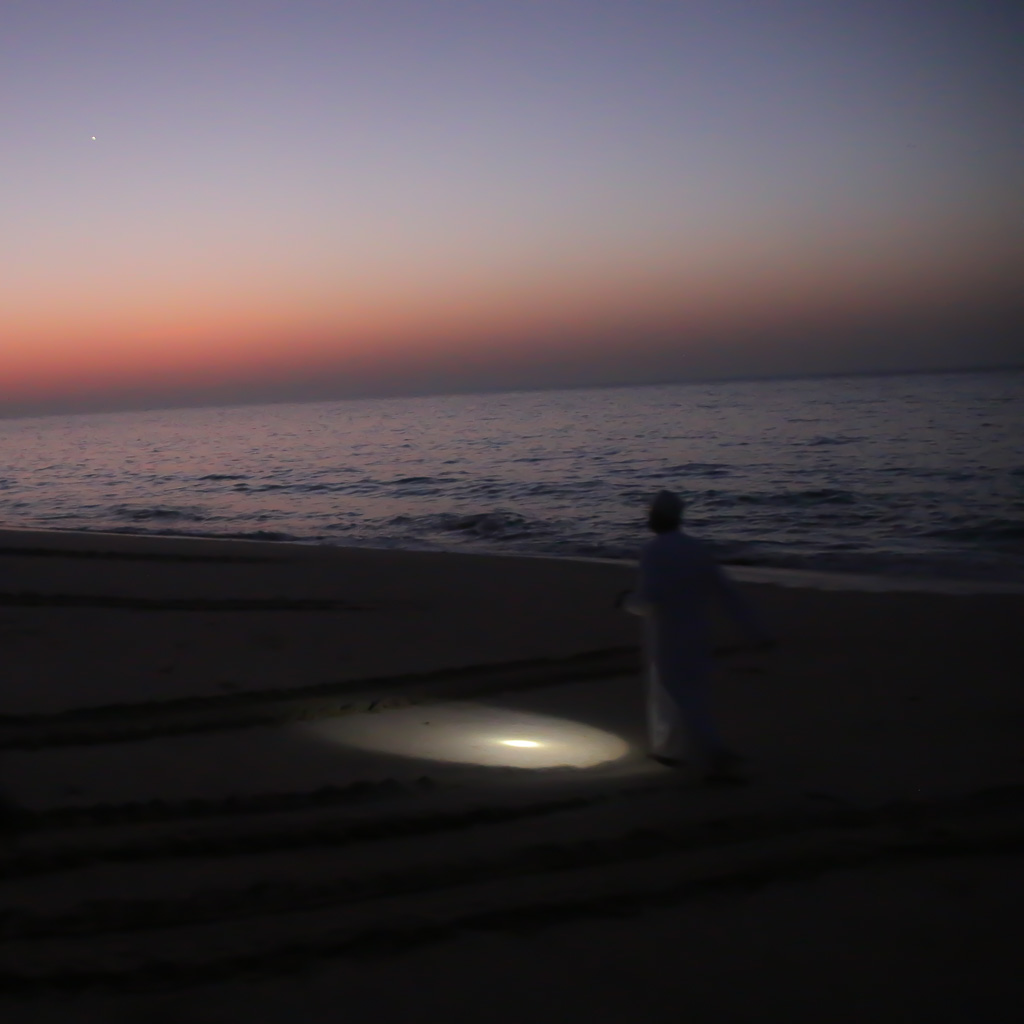 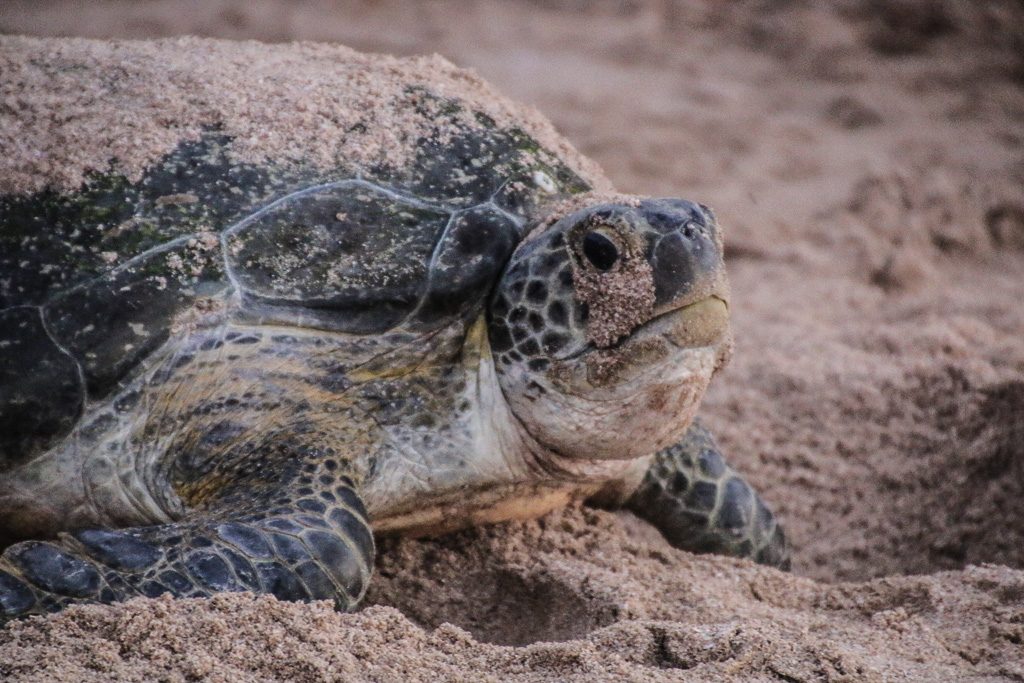 It was just before sunrise, and I was standing in the morning cold on the beach at the Ras al Jinz Turtle Reserve waiting to walk down to the ocean front in search of nesting turtles.

There were a few people in the group, and another group had already set out just ahead of us in the pitch dark while our guide explained the need for silence and the absence of light.

The beach at Ras al Jinz – a few hours south of the capital Muscat- is one of the most popular nesting grounds for turtles in the world. Most nights of the year, even outside of the peak nesting season, it’s usual to find at least one turtle on the beach here.

With the help of our local guide, who had spent his whole life living and working along this coastline, I was confident that we would find a turtle and perhaps even see turtle eggs hatching.

In the dark, after being warned again by the guide not use flash, or shine any lights at all we quietly began moving towards the ocean. 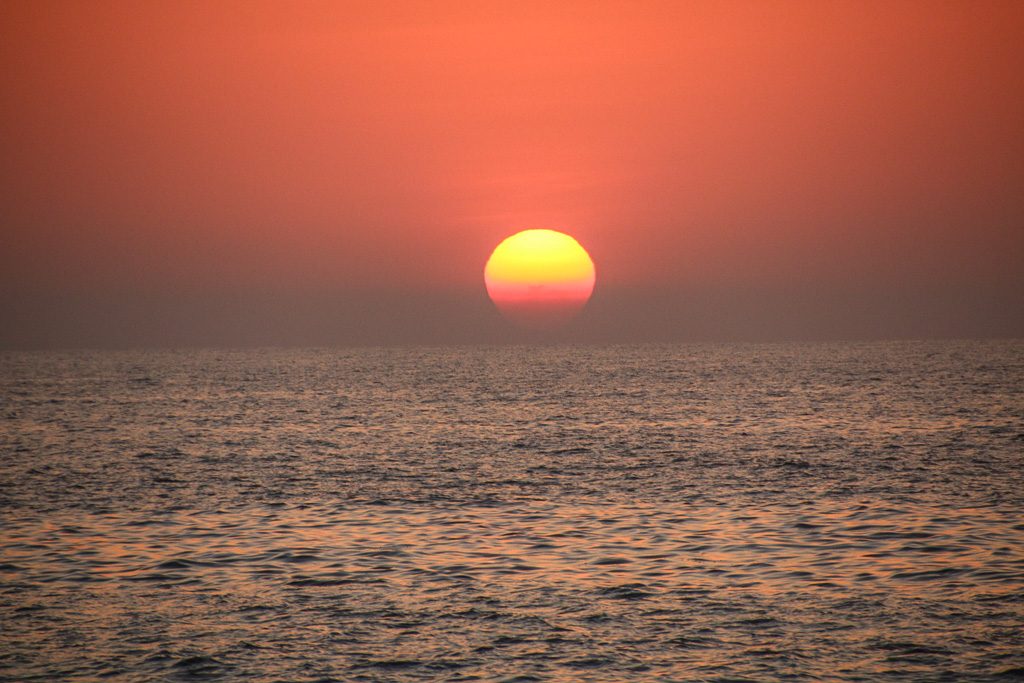 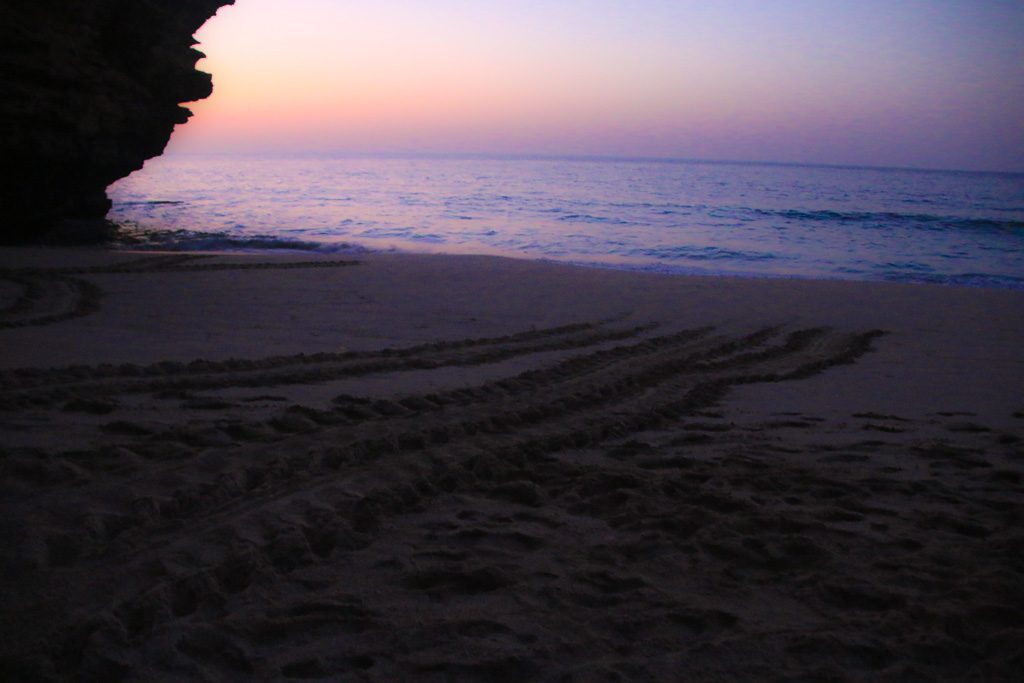 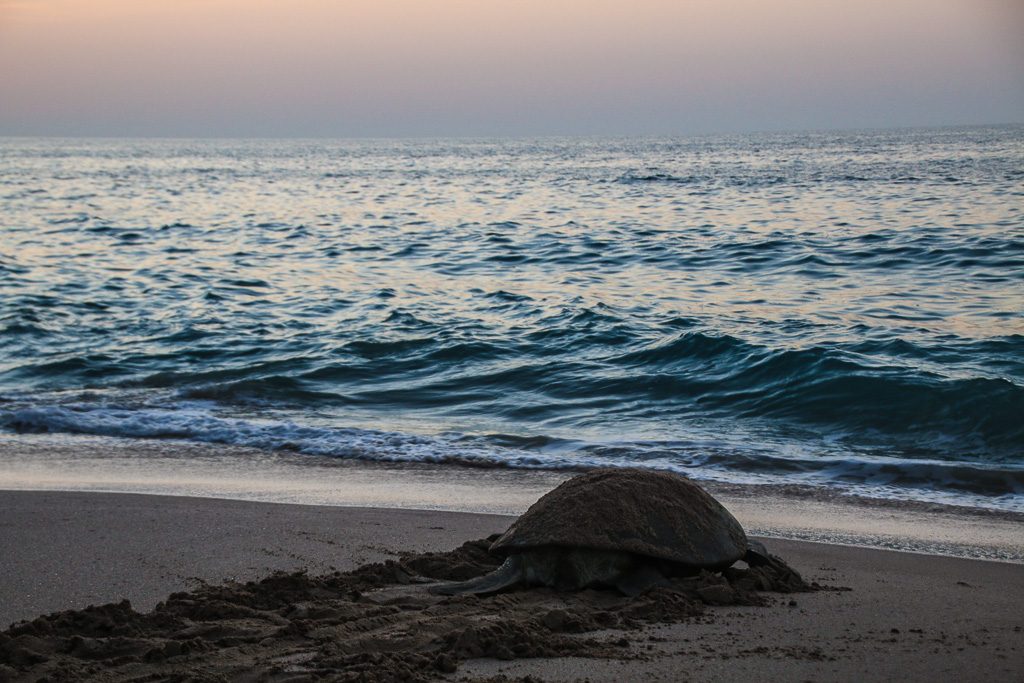 The small fishing village of Ras al Jinz has always been a favourite nesting spot for Green Turtles- an endangered species of turtle- and this environment is pivotal to their survival.

In 1996 the Omani government recognised this and began transforming the area into a reserve, to protect the beach and the turtles and to also provide an incentive for tourists to visit, to learn and to see the turtles up close.

The locals of Ras al Jinz were educated on conservation, and now it is the villagers who lead the tours and help to run the turtle centre and on site accommodation too. 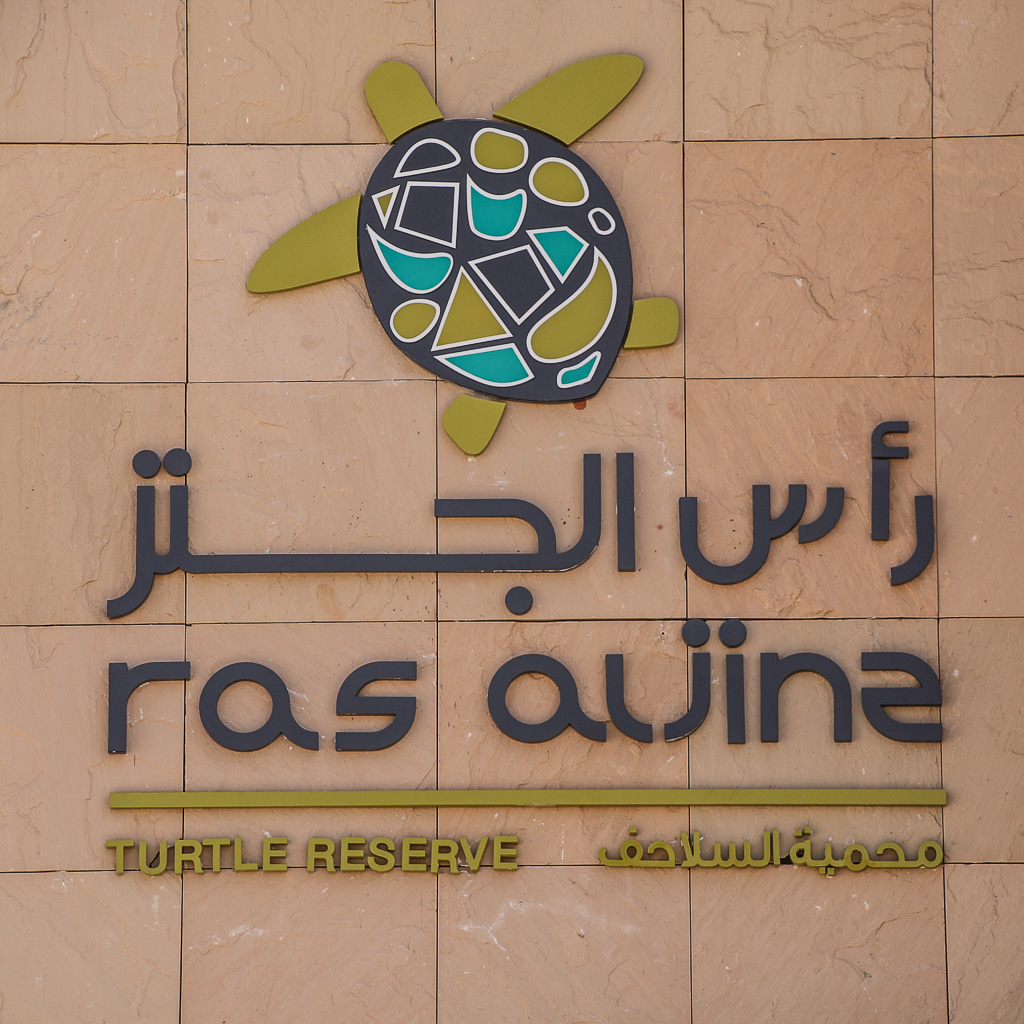 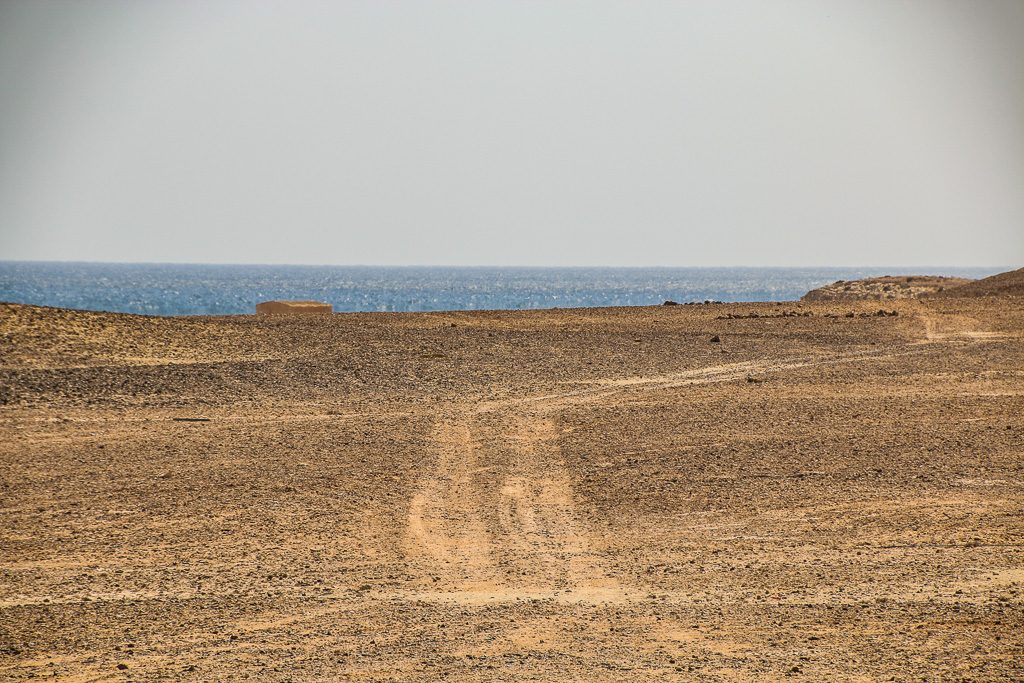 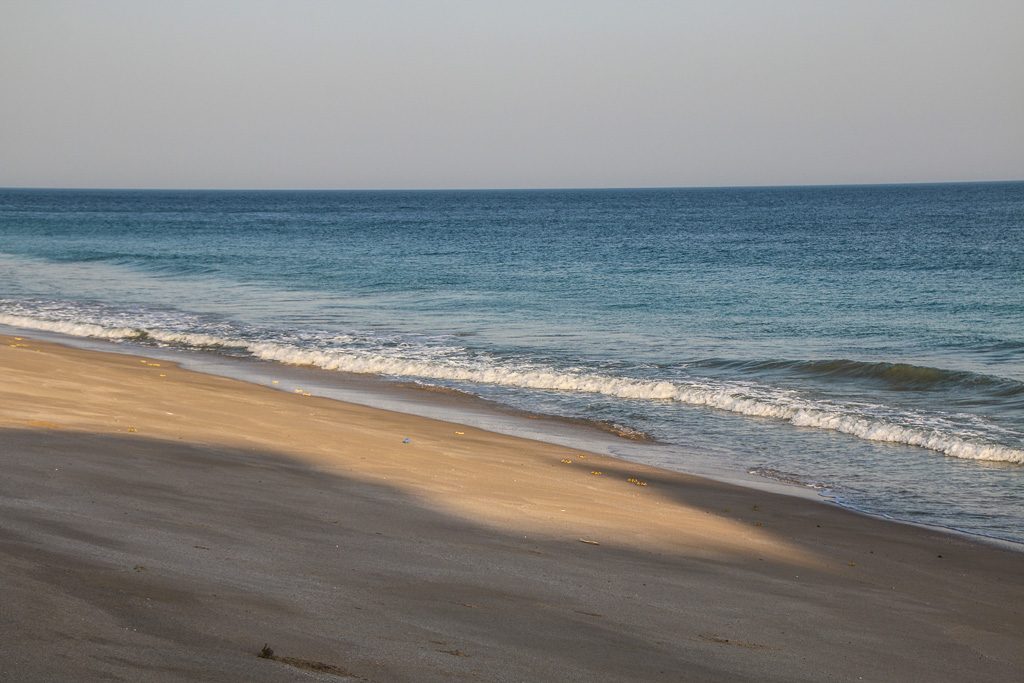 I’d walked down to the beach at Ras al Jinz the day before. The turtles will stay away from land during the day, but I still took in the rugged coastline that stretches along the Indian Ocean in this part of Oman.

I walked the beach, finding turtle tracks from the evening before still in the sands, and the crater like shapes of turtle nests buried along the length of the shore. Here and there were turtle egg shells and even the sad sight of a lost baby turtle.

When the turtles hatch here, they immediately try and make their way towards the ocean. The young turtles will follow the moonlight to navigate, however unnatural lights, from buildings, torches, cars- anything – can disrupt the newly hatched turtles sense of direction, and they wander the wrong way, never to make it into the ocean. For this reason our guide stressed that there could be no light and no flash photography when we headed out in the early morning. 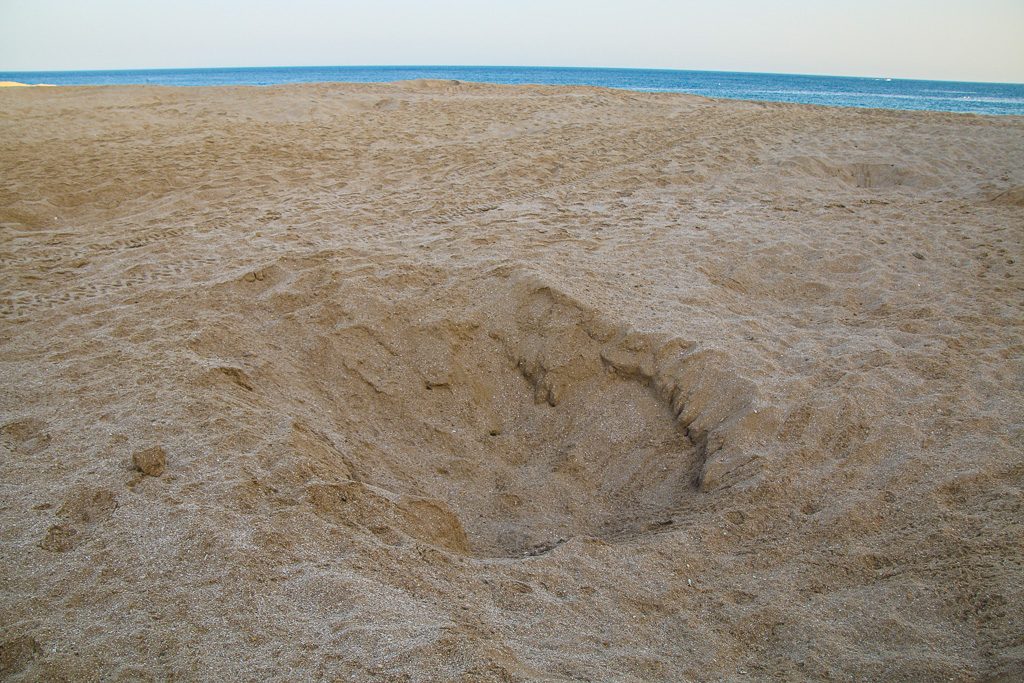 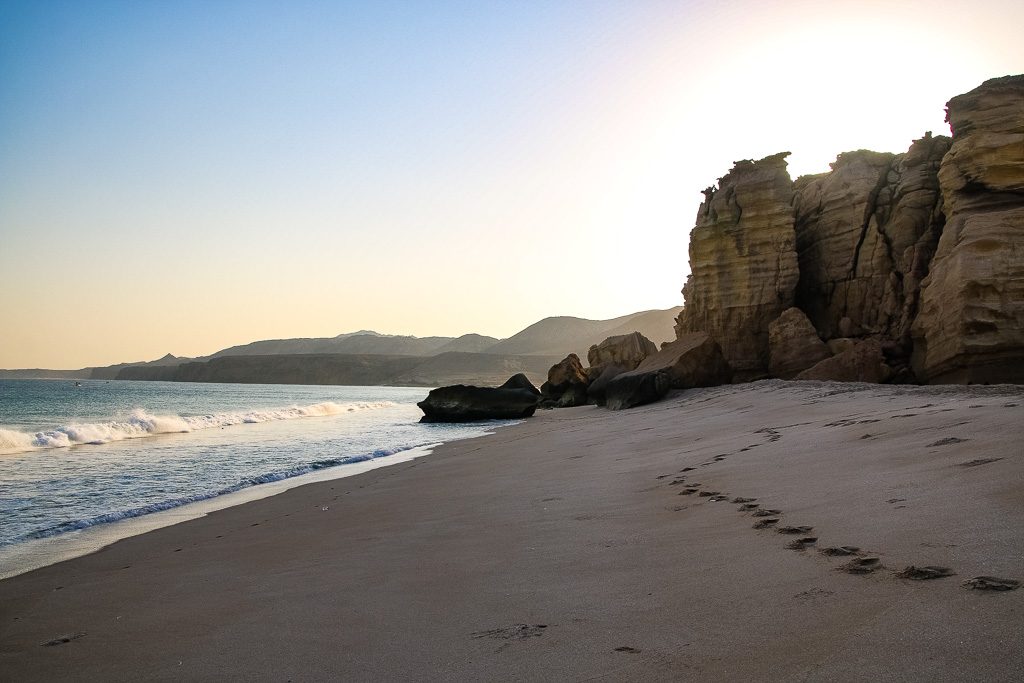 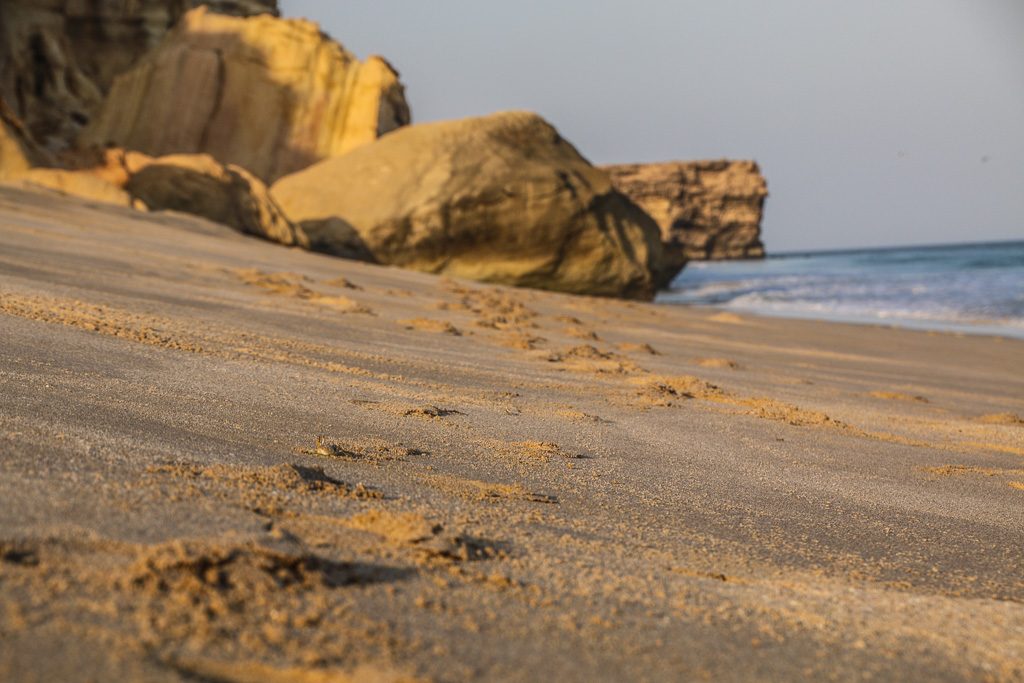 The best time to see the turtles nesting and hatching at Ras al Jinz is either early morning or late at night. Under the cover of darkness, the female turtles will approach the shore and find a nesting spot along the beach, digging away in the sand with their flippers before laying eggs, covering the nest and then making their way back into the ocean again before the sun rises.

In the early morning darkness we trooped through the sand, carefully avoiding the sandy pot holes of old turtle nests and watching out for any new hatchlings that could be making their way into the Indian Ocean.

The waves rolled gently into the sands, and before long our line of turtle spotting tourists were guided around a noisy, nesting turtle. This large female Green Turtle was scooping sand with her flippers out of a deep crevasse that she had spent the night building.

Sand was flying everywhere and the sound of turtle flippers scraping on the beach front carried on the wind. When the nest was deep enough, the turtle paused, before she began laying eggs in the soft sand. 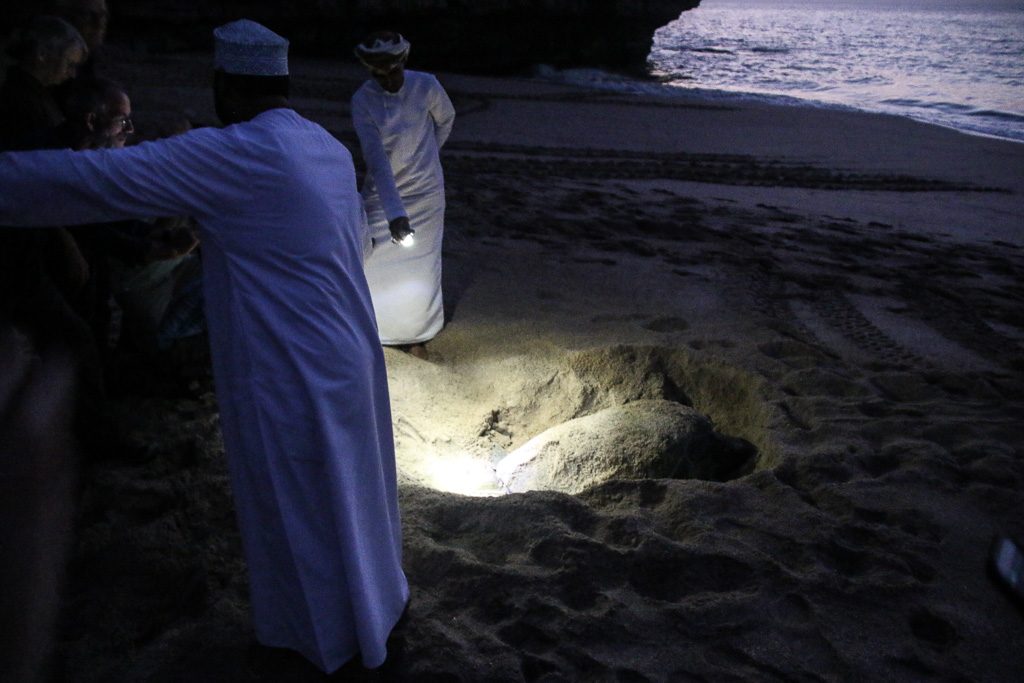 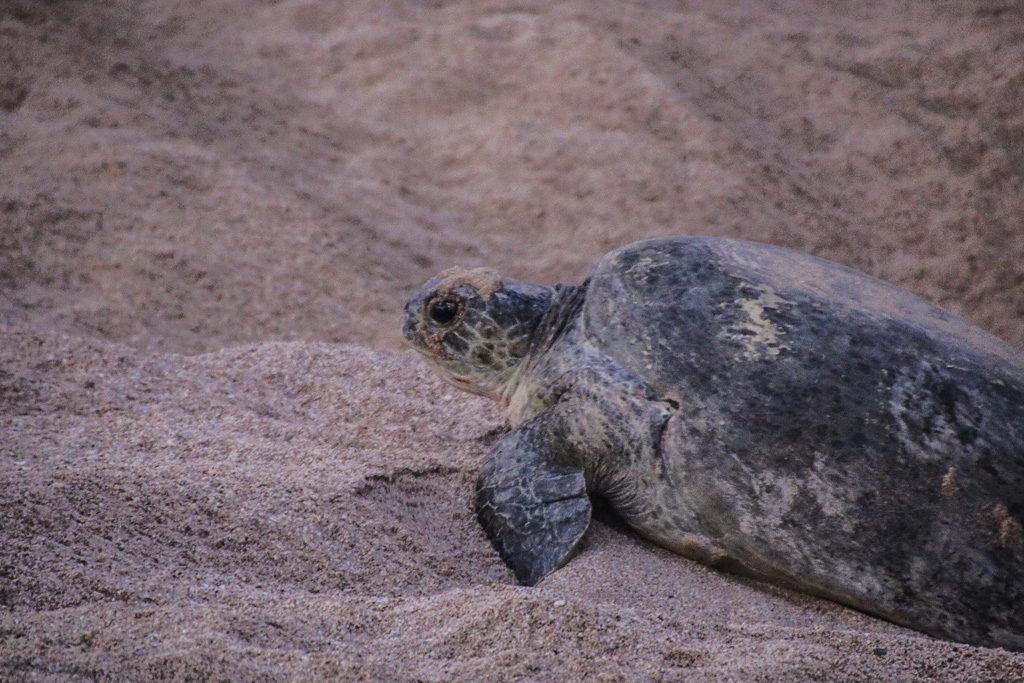 A Retreat To The Ocean

Further along the beach a second female Green Turtle had just finished burying her nest in the sand. With what seemed like monumental efforts she dragged herself across the sand, and slowly began making her way back towards the ocean.

By now the sun was just beginning to rise, and stretching along the sands were turtle trails leading into the ocean. It had been a busy night at Ras al Jinz, and these stragglers were the last of the turtles still nesting in the early morning light.

The female turtle had soon retreated back to her ocean home, and the waves swallowed her giant shape as the sunrise glittered across the surface of the water. 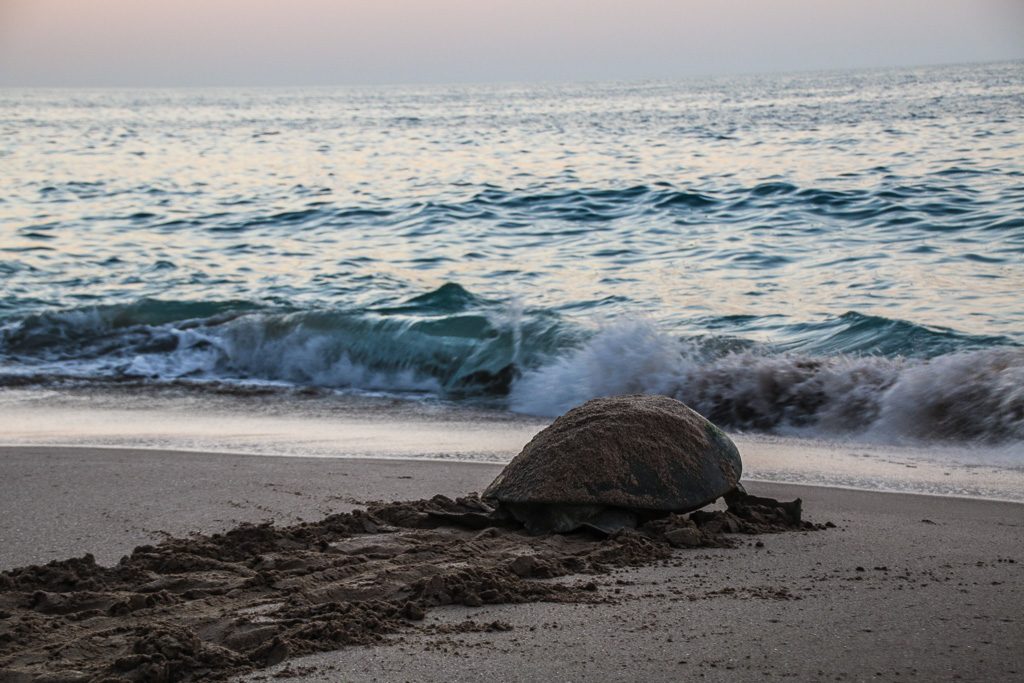 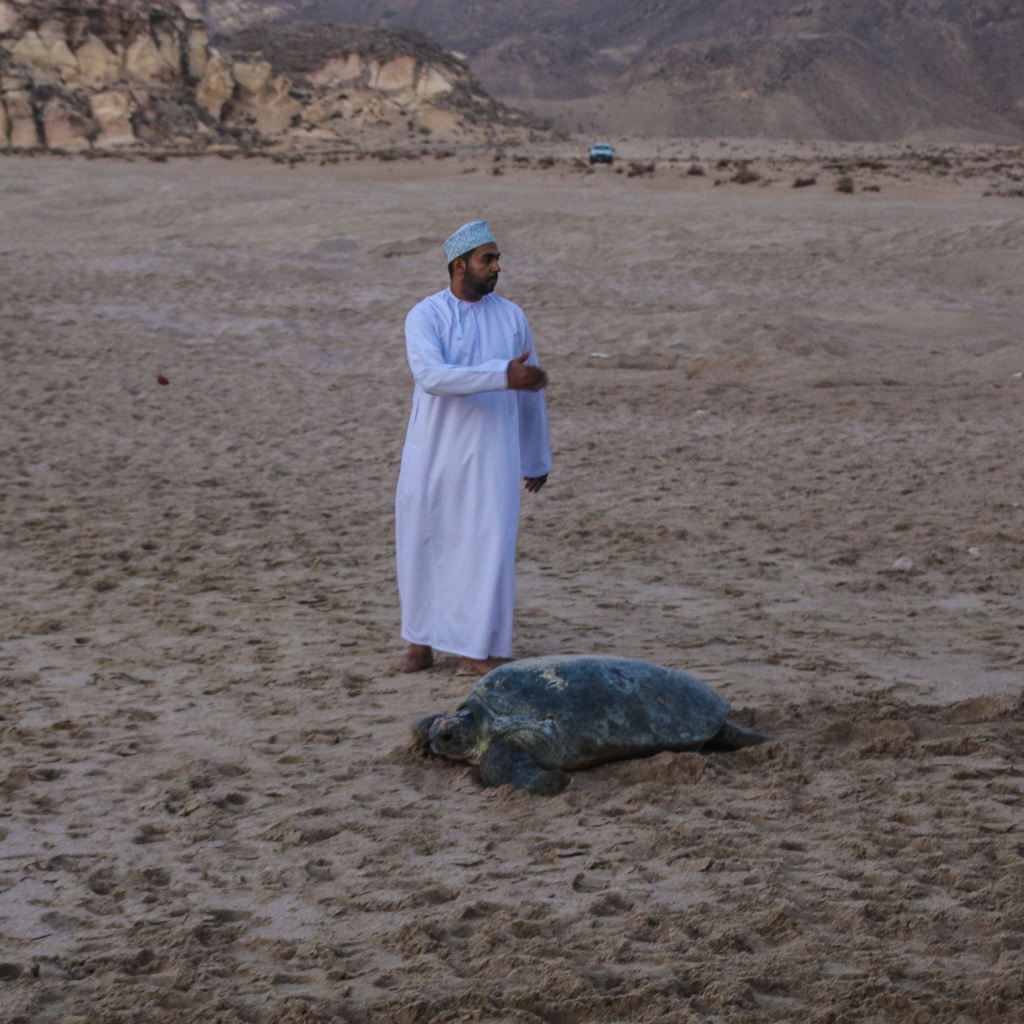 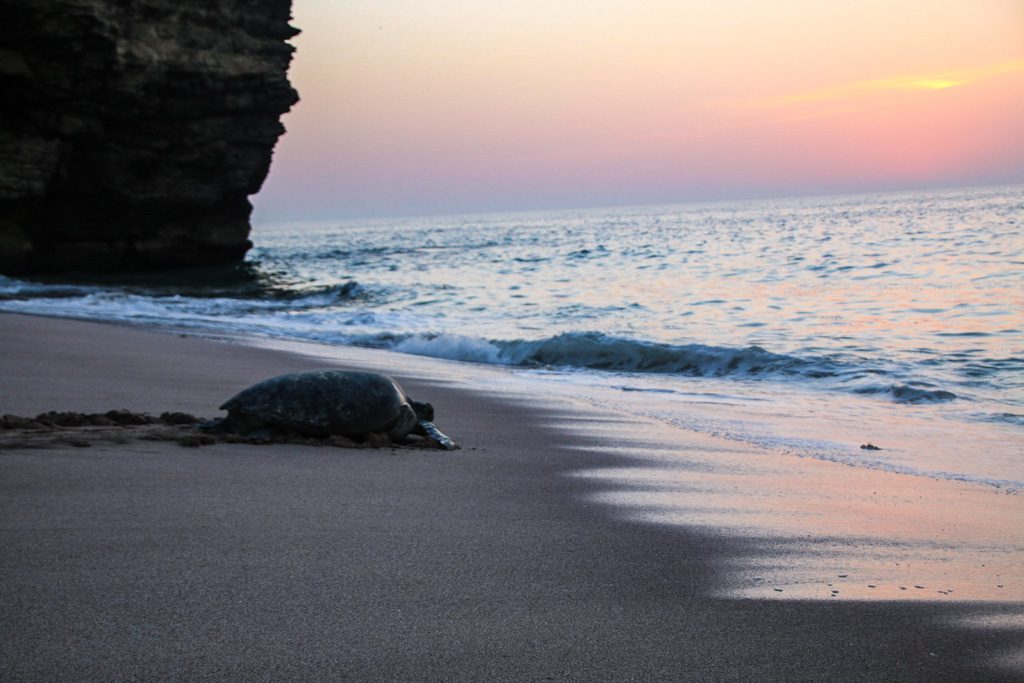 The Dash Across The Sands

While I was watching this turtle make her retreat to the ocean our Omani guide was walking his way through the mounds of nests that covered the beach, and he soon found what he was searching for.

Beckoning the group over he pointed out the small baby turtles in the sand, hatching from their egg shells and desperately moving towards the ocean ahead of them.

A single nest can incubate hundreds of turtle eggs, but despite the vast numbers that hatch very few would ever return to his beach to make their own nests.

Many of these young turtles wouldn’t even make it the ocean. They are picked off by predators or simply start walking the wrong way.

Those that do make it to the ocean, have a huge battle to survive until adult hood. Turtles can live for decades, but only if they survive the perils of childhood as they mature. And even those that do survive, are now critically endangered by modern fishing methods and plastic waste. It is for these reasons that reserves such as this one at Ras al Jinz are so important to turtles, providing a safe haven for females to nest and to give the young at least the opportunity to reach the ocean. 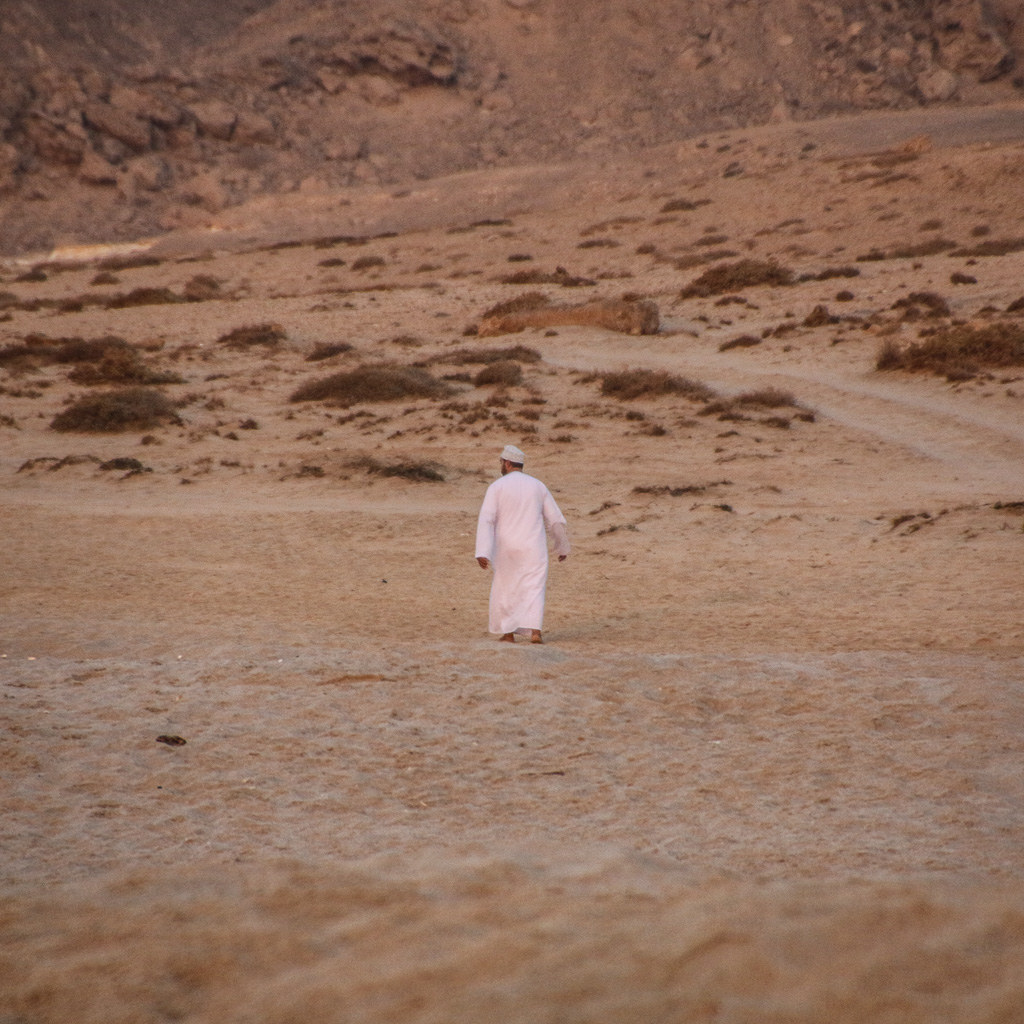 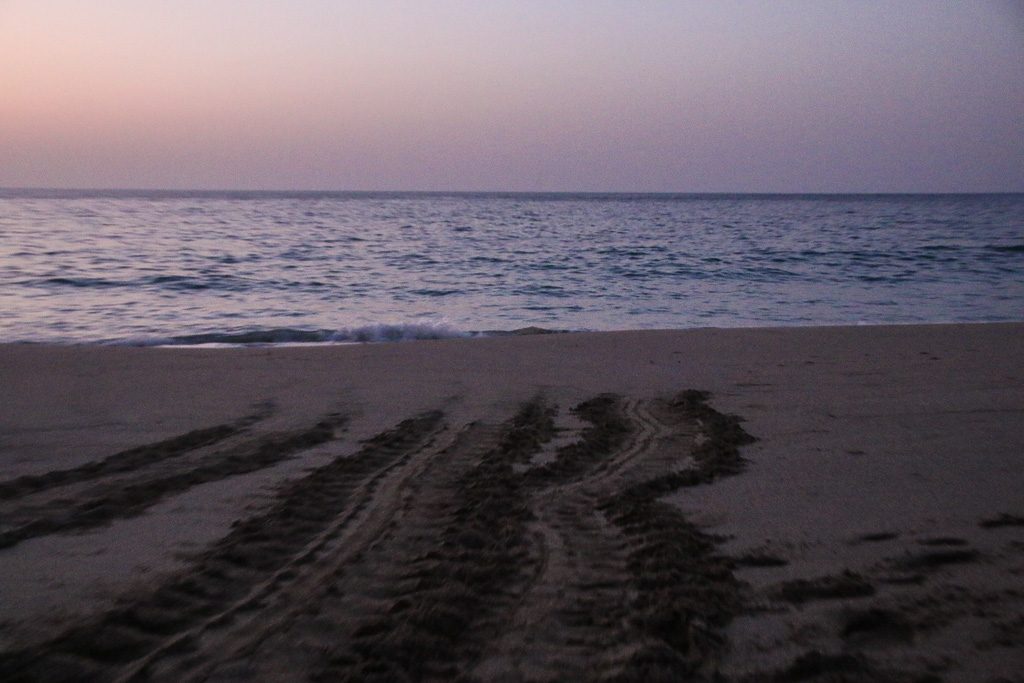 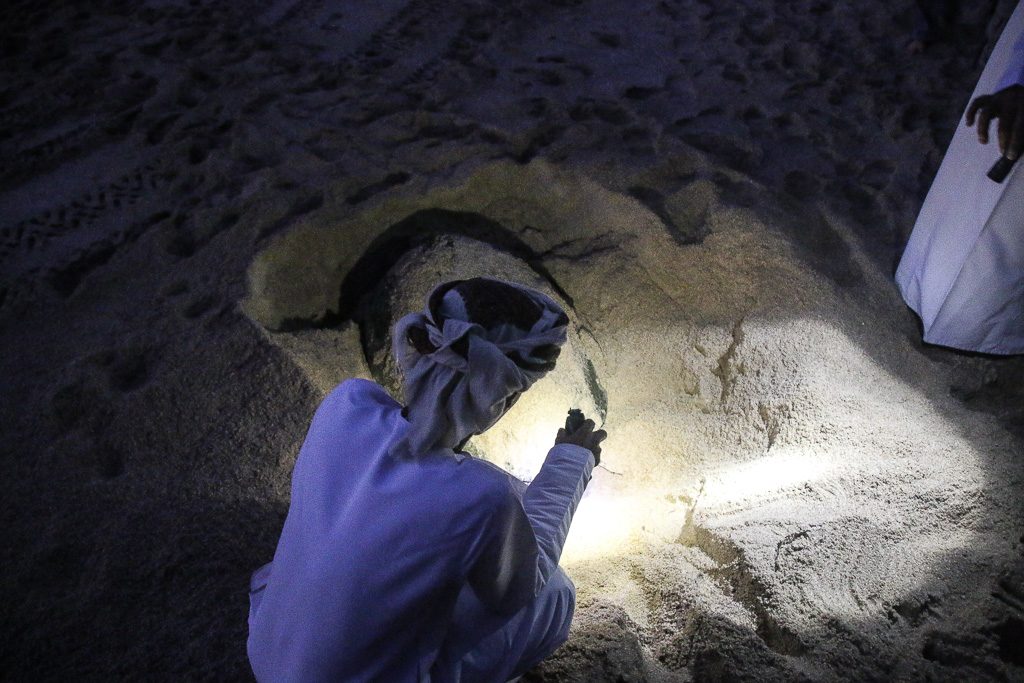 The Sun Rises Over The Ras Al Jinz Turtle Reserve

I stood on the sand watching the sun rise and waiting for the turtles to reach the ocean, their mad dash taking them into the waves, to be washed out by the current.

I wondered how many would make it back in later years to Ras al Jinz to nest on the shores of Oman, like the last female turtle on the beach who had now laid all her eggs, buried them in the sand and was pulling herself back into the waves too before the sun was fully up.

The plight of the turtle is just one of many battles faced by endangered species in our oceans. Reserves such as Ras al Jinz are incredibly important to the cause of our wildlife, and the centre provides much needed education to locals and visitors, as well as providing a valuable opportunity to witness these magnificent reptiles in their natural environment. 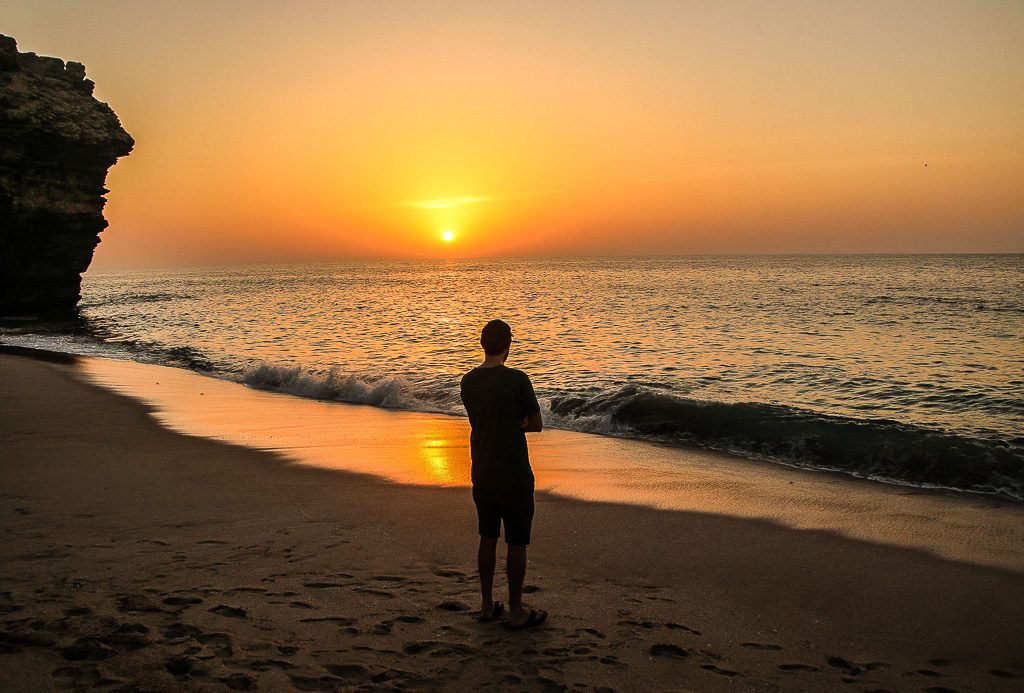 Location Of The Ras al Jinz Turtle Reserve In Oman:

Travelling to Ras Al Jinz Turtle Reserve in Oman? Then why not support this blog by booking your accommodation through our partners at Booking.com! There’s no extra charge to you, the customer, but you’ll help me to keep creating more awesome content like this! Just click HERE!

If you loved this article about the Ras Al Jinz Turtle Reserve, then why not have a read of my experience swimming at the Bimmah Sinkhole in Oman! You can find that article HERE!

Dolphins And Smugglers In Khasab, The Fjords Of Oman