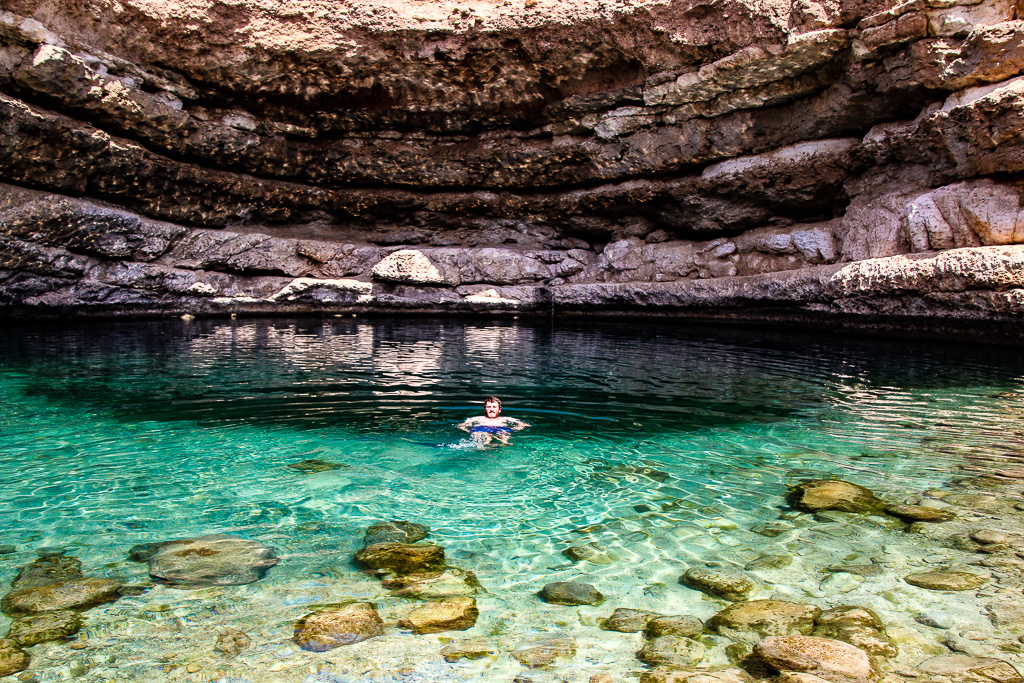 The Bimmah Sinkhole In Oman Is An Amazing Place To Go Swimming!

The Bimmah Sinkhole in Oman could quite possibly be one of the most incredible, natural swimming spots I’ve ever jumped into. The water is almost perfectly clear- turquoise, blue and green in colour- and it’s all perfectly out of place in the dry, dusty landscape of coastal Oman.

Who Wouldn’t want to go swimming in the Bimmah Sinkhole? 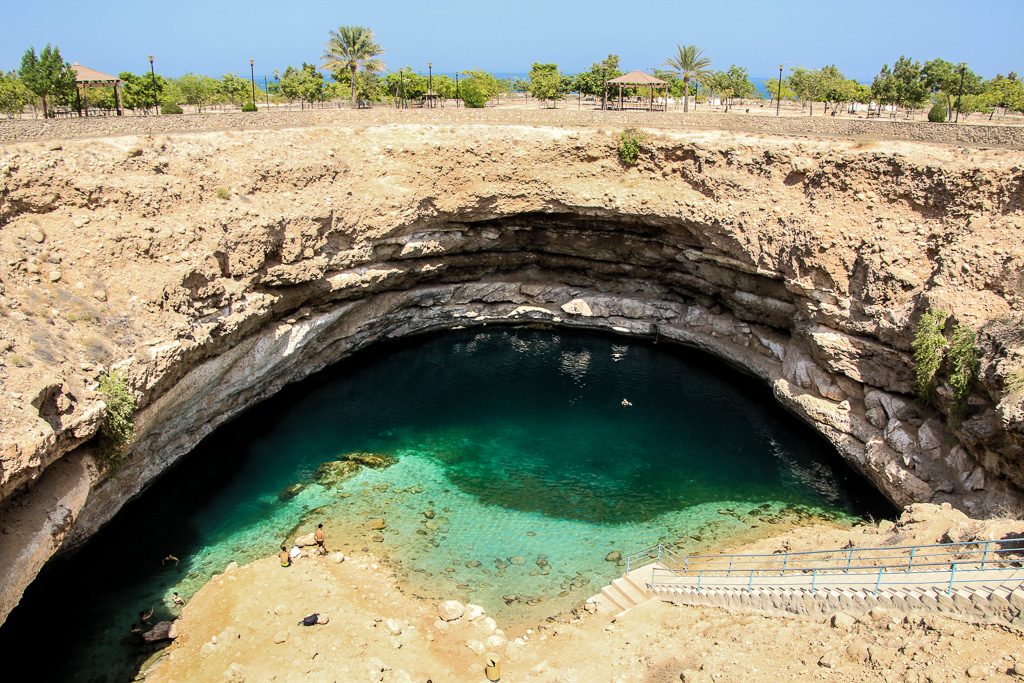 It Was Hot Outside, Really Hot

I was travelling south from Muscat, driving along the new highway which carves through the mountains that ring the Omani capital before throwing you out the other end by the Indian Ocean.

It was hot outside. Especially for a traveller from England. And even with the A/C on full, winding down the window every now and then to take a picture of the surreal and rocky land I was driving through filled the car with raw desert like temperatures that wouldn’t fall again. 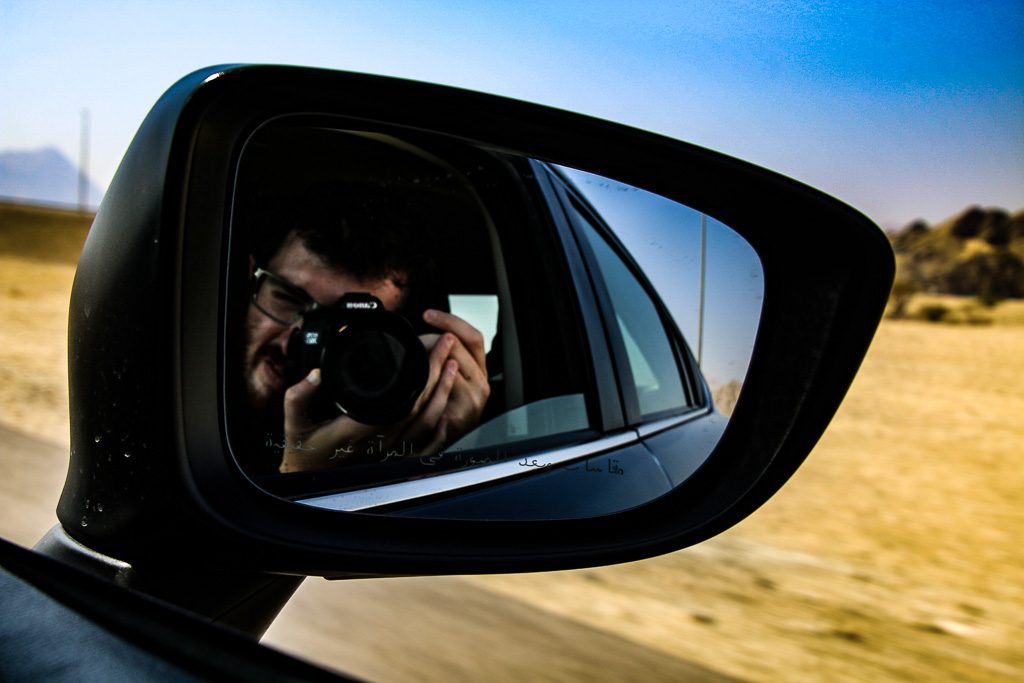 But what did I expect, really? Oman is a hot country. A dry and dusty country for the most part, with large tracts of desert and scorching temperatures for most of the year. It’s a wild place, and a place that seems almost inhospitable.

In reality though, it is far from inhospitable- the Omanis have flourished in this land for centuries- it just looks that way when all you can see is dust, sand, rock and more dust.

It was a surreal landscape to admire passing by as I drove south. The mountains rose high on either side of the road, and for kilometres there would be little but rock- and then out of the dust would appear little villages, shining white houses shimmering in the sun, wrongly placed in the barren looking landscapes they were part of. 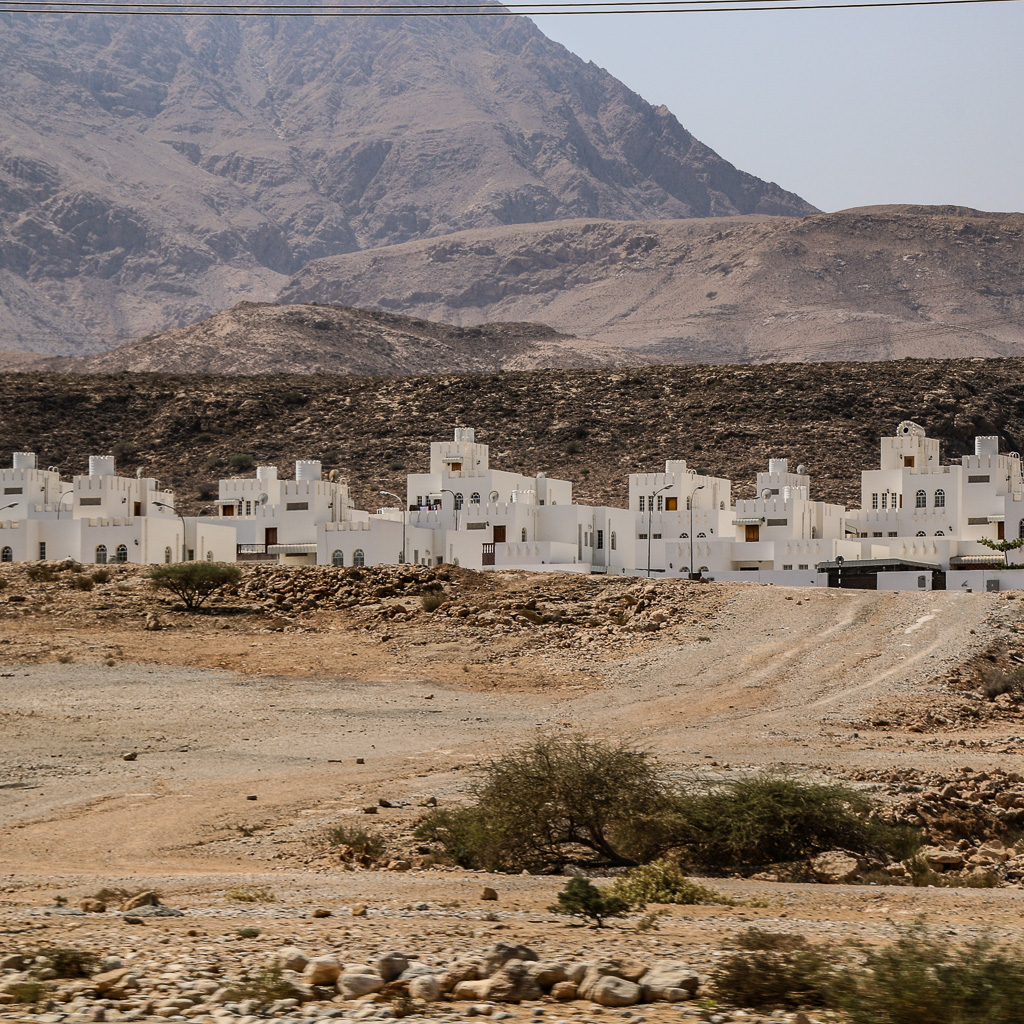 A Hole In The Ground

After an hour of driving the highway met with the old coastal road, a narrow track which leads to the fishing villages which stretch along the rugged but beautiful shores.

In between the coastal fishing villages and Indian Ocean beaches I was looking for a hole in the ground- the Bimmah Sinkhole. 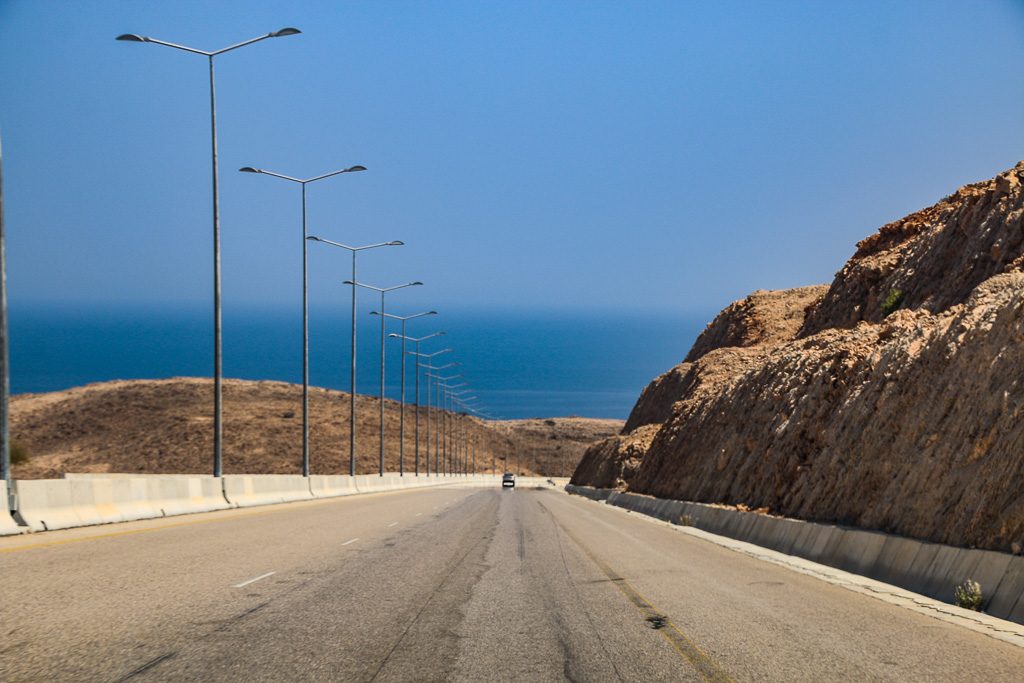 Locals know the Bimmah Sinkhole as Hawaiyat Najm, which translates to English loosely as The Fallen Star. Presumably it’s believed the hole was caused by some sort of meteorite collision, and indeed it would look that way from above. The reality is that the sinkhole was caused by collapsing rocks opening up a cavern in the ground. 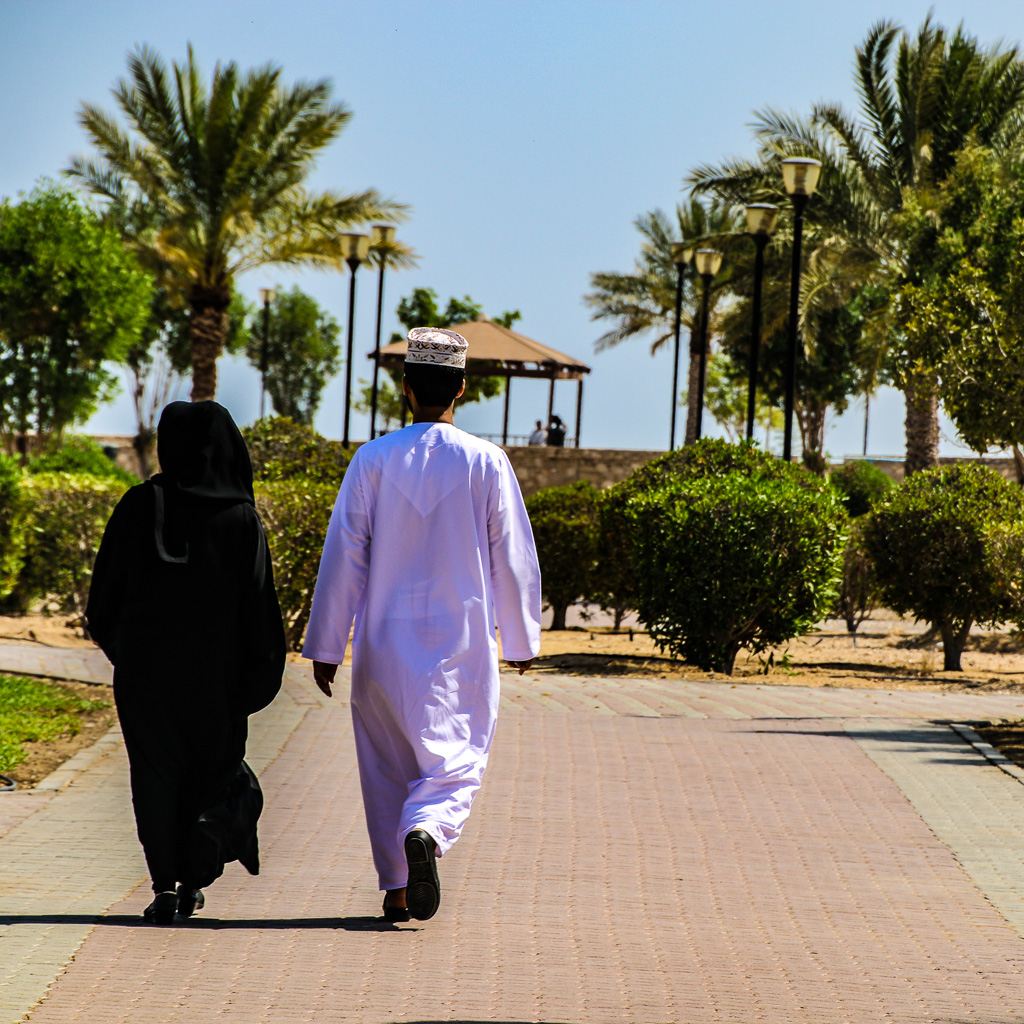 I turned off onto another dusty road from the coastal highway, following the faded tourist signs to The Fallen Star. Local authorities have turned the area around the sinkhole into a park, complete with picnic benches and the ubiquitous Omani goat. But despite knowing the sinkhole is there, on entering the park it is impossible to see the cavern until you are right on top of it. It somehow still manages to just appear out of absolutely nowhere. 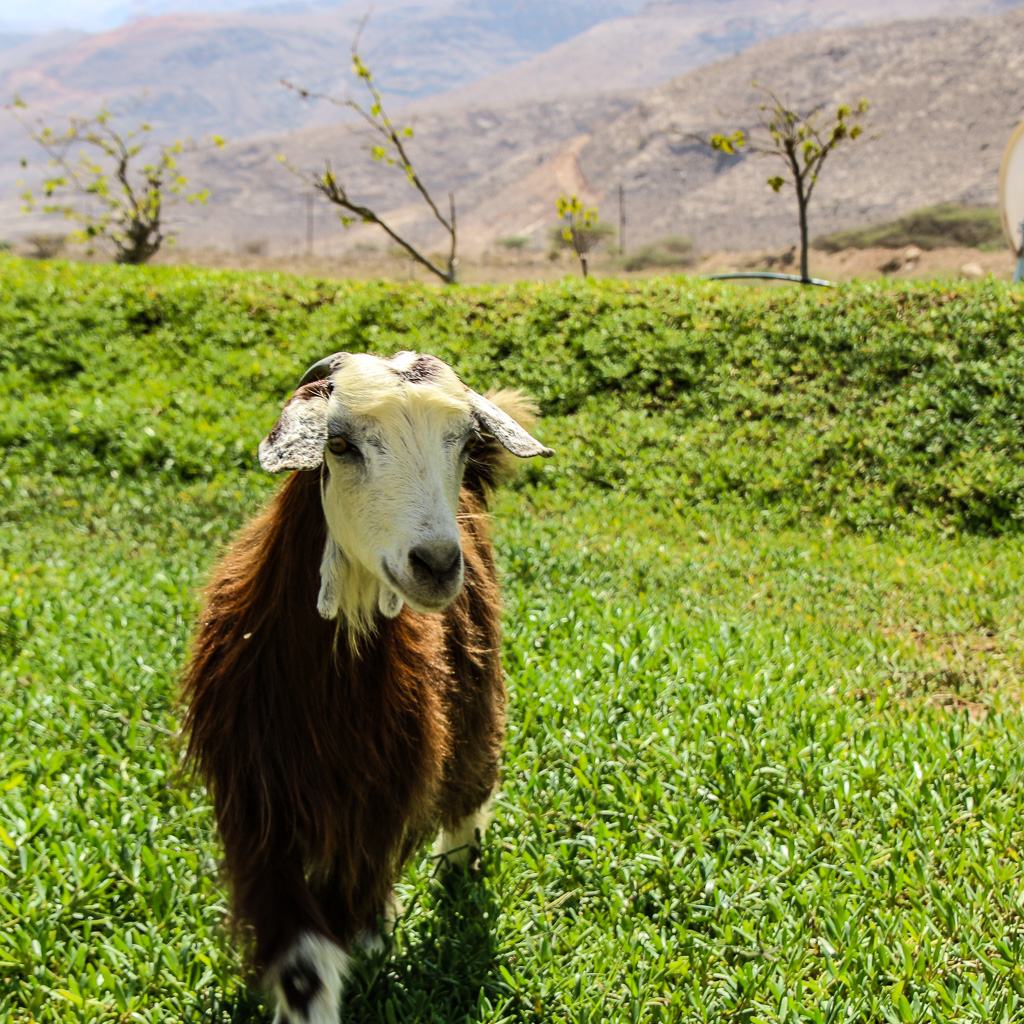 A Dip In The Bimmah  Sinkhole

A small, low wall surrounds the sinkhole. Presumably to deter people from launching themselves from the top and into the inviting waters below. Although it wan’t a particularly tall wall. I walked up to the stone barrier, and leaning over I saw the turquoise, green waters in all their glory.

I wasn’t going to jump from here though. The Bimmah Sinkhole is around 20 metres deep and 50 metres across. This isn’t a daredevil travel blog. No, I want to keep bringing you stories from across the world. So instead I opted for the easy way down, the safety of the concrete steps. 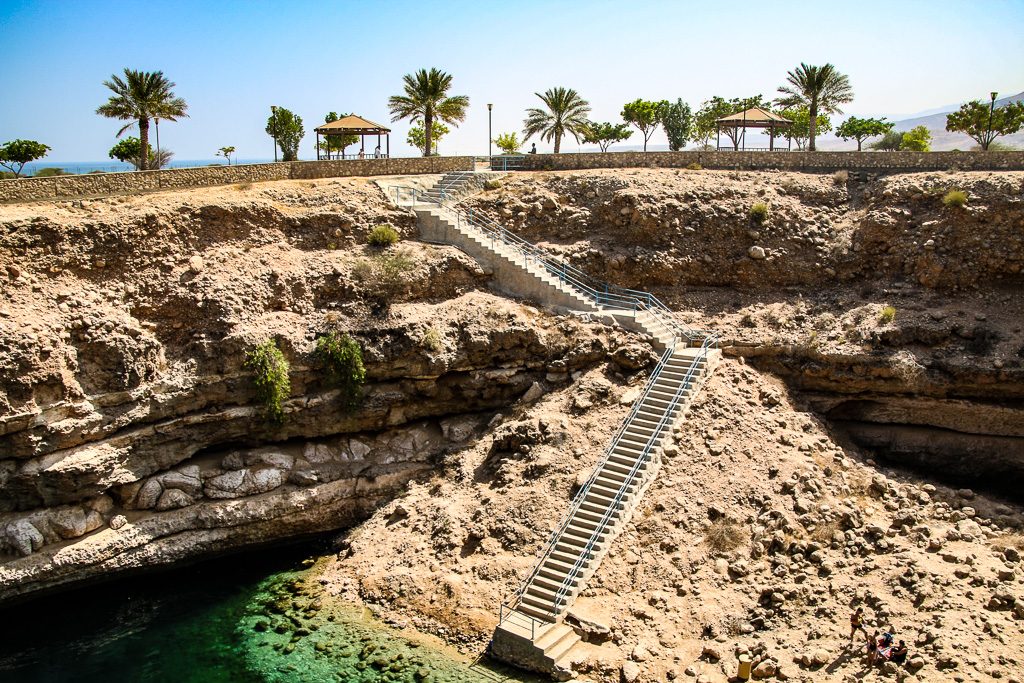 If the Bimmah Sinkhole was surrounded by other turquoise lagoons it wouldn’t be quite so spectacular. What makes it such a surprising place, is not just the fact that it’s hidden metres below the surface, but its contrasting location in this dry wilderness. It’s literally a small oasis in a desert. And unless you knew it was there you would never find it. 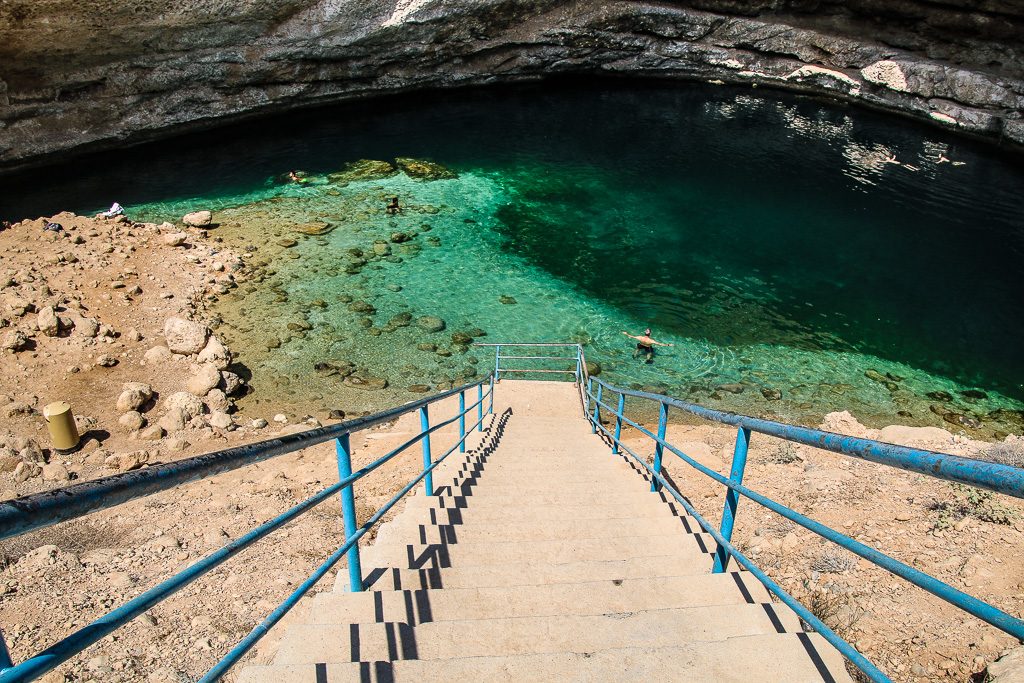 I strolled down the concrete steps towards the waters, the heat was growing more oppressive the longer I was out in the sun and the water was looking more and more inviting the closer I got. 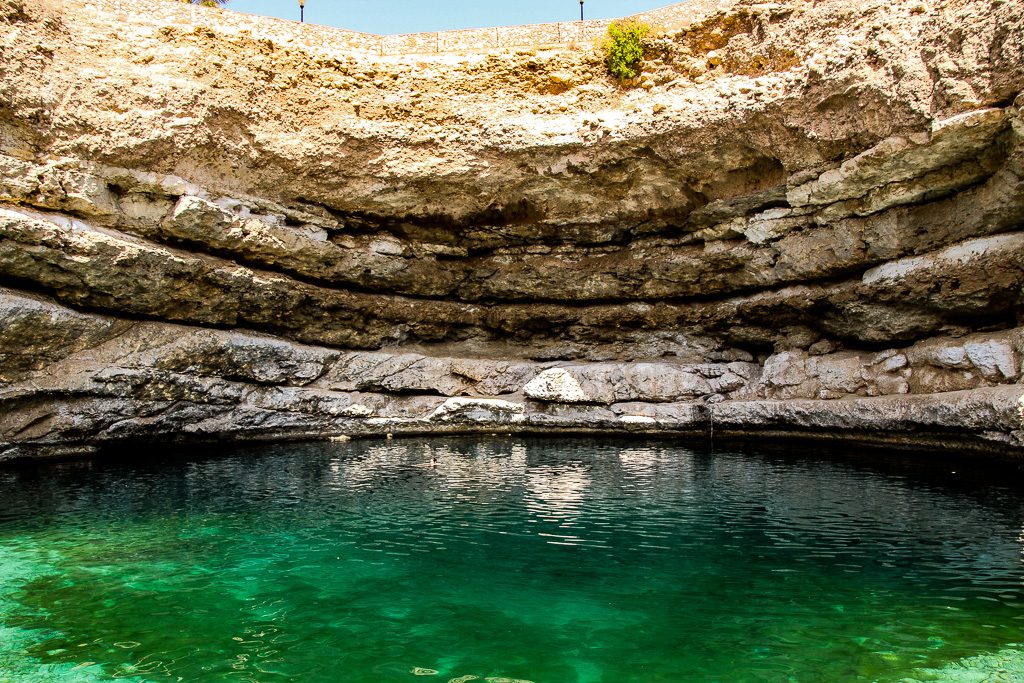 The water was as refreshing as it looked from above. But in the Omani heat anything is refreshing really. I waded in and found the bottom gave way a few metres out, dropping even further below the surface. 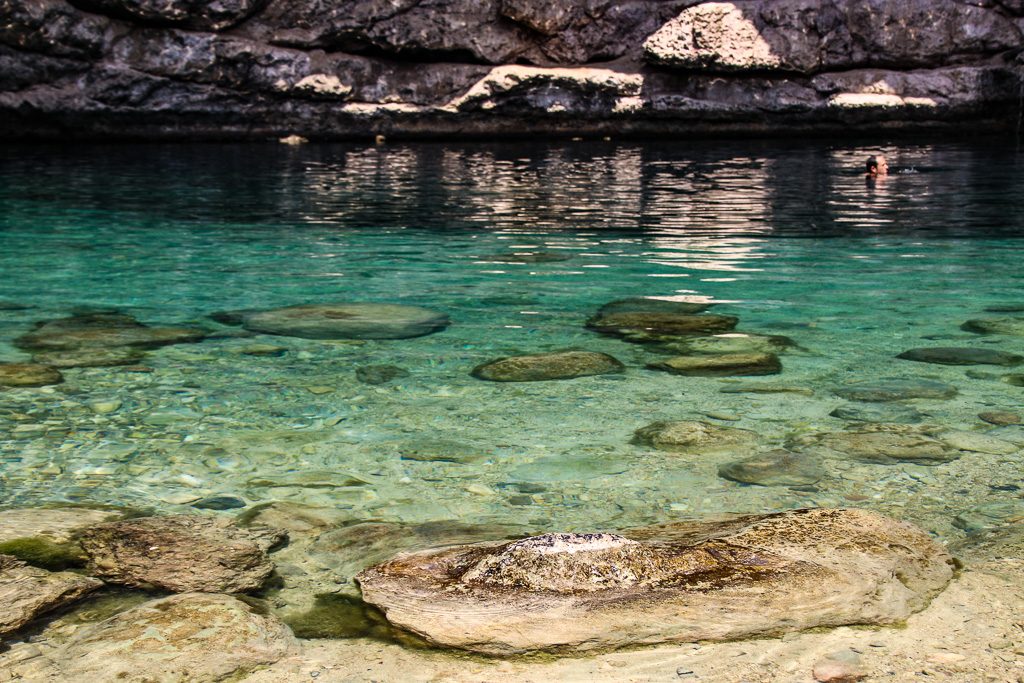 There was nothing left to do but float in the cold waters and admire the natural cavernous beauty surrounding me for the rest of the afternoon. The Bimmah Sinkhole in Oman really is an amazing place to go swimming! 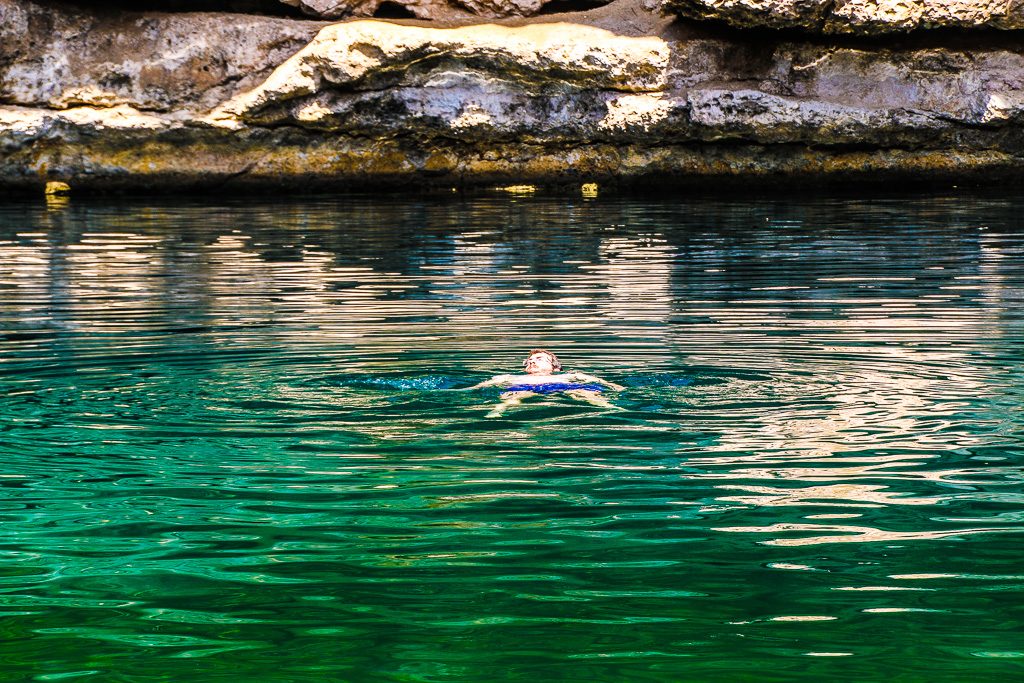 How To Travel To The Bimmah Sinkhole In Oman

For more adventures from Oman, then why not have a read of my journey through the beautiful Muscat Souq. You can find that article HERE!

In Search Of Authentic Oman: The Nakhal Fort And Nakhal Hot Springs

Dolphins And Smugglers In Khasab, The Fjords Of Oman