Photos From The Road: The Eagle Hunters of Kyrgyzstan 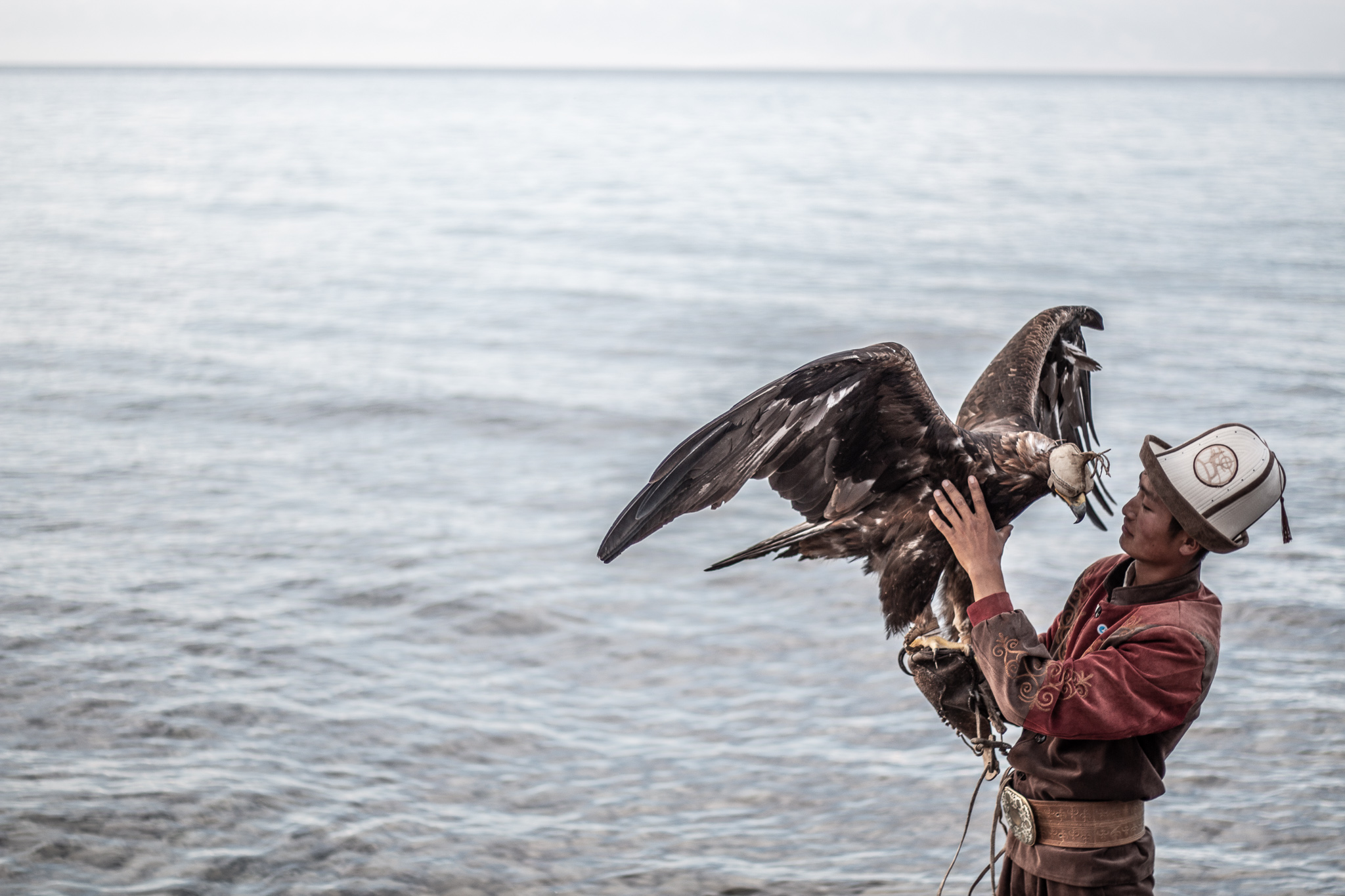 On the rocky southern shore of Issyk Kul Lake, when I was travelling through Kyrgyzstan, I met with members of the Salburuun Federation, a group of locals who are attempting to preserve their unique nomadic culture in the face of modernity.

Otherwise known as the Eagle Hunters of Kyrgyzstan, these nomads are keeping traditions alive on the steppe and in the mountains by training fearsome Golden Eagles, just as their ancestors before them did for centuries, before the arrival of the Soviet Union.

These practices survived the ravages of communism, collectivisation and the settling of the nomads in towns and cities across the country, and today, with events like the World Nomad Games growing in international popularity and providing even more reason to preserve this culture, traditional customs such as hunting with eagles, has seen a resurgence.

With the sun setting over the mountains and the waters of Issyk Kul Lake lapping against the rocks in the background, I met with these famed Eagle Hunters, to see a demonstration of the bond between man and bird.

I recently wrote an article for Remote Lands Travelogues, detailing the encounter, but I realised that I’ve never got around to publishing these photographs on this website. So here they are for you today, the Eagle Hunters of Kyrgyzstan.

The Eagle Hunters of Kyrgyzstan

The two Eagle Hunters and their younger assistant were here to demonstrate their ability to handle their Golden Eagles.

Aidar, in red and Nursultan, in white, were dressed in their traditional Kyrgyz costumes, complete with the requisite Kalpak for their headgear, an item of clothing that you see all across the nation.

With their majestic eagles resting on leather gauntlets, and flapping their wings fiercely in the wind that swept across the lake, they showed the affection and strong bonds that are created between the handler, and the bird of prey.

The Kyrgyz people traditionally trained these mighty Golden Eagles to aid them in their nomadic lifestyles.

The Eagles were trained to hunt, to catch hares, foxes and other prey in the mountains and across the steppes, and to return to their handlers with meat for the whole family.

The eagles are taken from birth, with the young Kyrgyz braving the dangerous talons of the mother to raid nests in the mountains.

An intense period of training follows, as the handler rears the eagle and conditions it to hunt and respond to commands.

After twenty years, the birds are released again into the wild, where they live out the rest of their long years independently.

Today, although the birds are mostly used for competitions and displays in modern Kyrgyzstan, the same training methods are still used, and the same unique, life long bonds still form.

A Display of Tradition and Culture

The Eagle Hunters had been competing at the World Nomad Games just the week before, and they had performed admirably.

Salburuun, the art of hunting with eagles, has evolved these days into more of a demonstration sport, although in the mountains, some nomads still depend on their birds.

At events and competitions, the Eagles will showcase their skills, and here, they flew after a grizzly dead fox that was trailed behind a galloping horse, or on command returned to their owner’s gauntlet.

It was quite the sight to behold, with the monstrous wings of the Eagles flapping in the wind as they swooped through the air powerfully, their talons effortlessly gripping into the fox.

Although the Golden Eagles may well be the centrepiece of the show, the nomads also traditionally reared a breed of dog unique to Central Asia.

Known as Taigons these hounds are floppy eared, with soft coats and a friendly, but firm stride.

They are incredibly fast and dangerously strong, and the Kyrgyz used them to guard their flocks and horses against the threat of wolves in the mountains.

The can easily keep pace with a wolf and is powerful enough to match bite for bite. Here, their handlers demonstrated this space across the open, sandy ground, as they chased down meat behind a galloping horse, kicking up dust as they effortlessly closed on their target.

The Future of Eagle Hunting in Kyrgyzstan

From the demonstration, it was clear that the traditions and culture of Kyrgyz nomads, even if they did suffer under the repressions of communism for almost a century, are well and truly on the rise again, although today’s modern Kyrgyzstan, these traditions will likely hold ceremonial roles, and be part of events like the World Nomad Games.

These Eagle Hunters take their skills seriously, as they do their animals too, and the close bonds between the handler’s and their birds and dogs was evident throughout all of their demonstrations.

With more international visitors to Kyrgyzstan than ever before, it’s a big boost for tourism in the region too, and the Eagles Hunters of Kyrgyzstan are slowly turning into legends on Issyk Kul Lake.