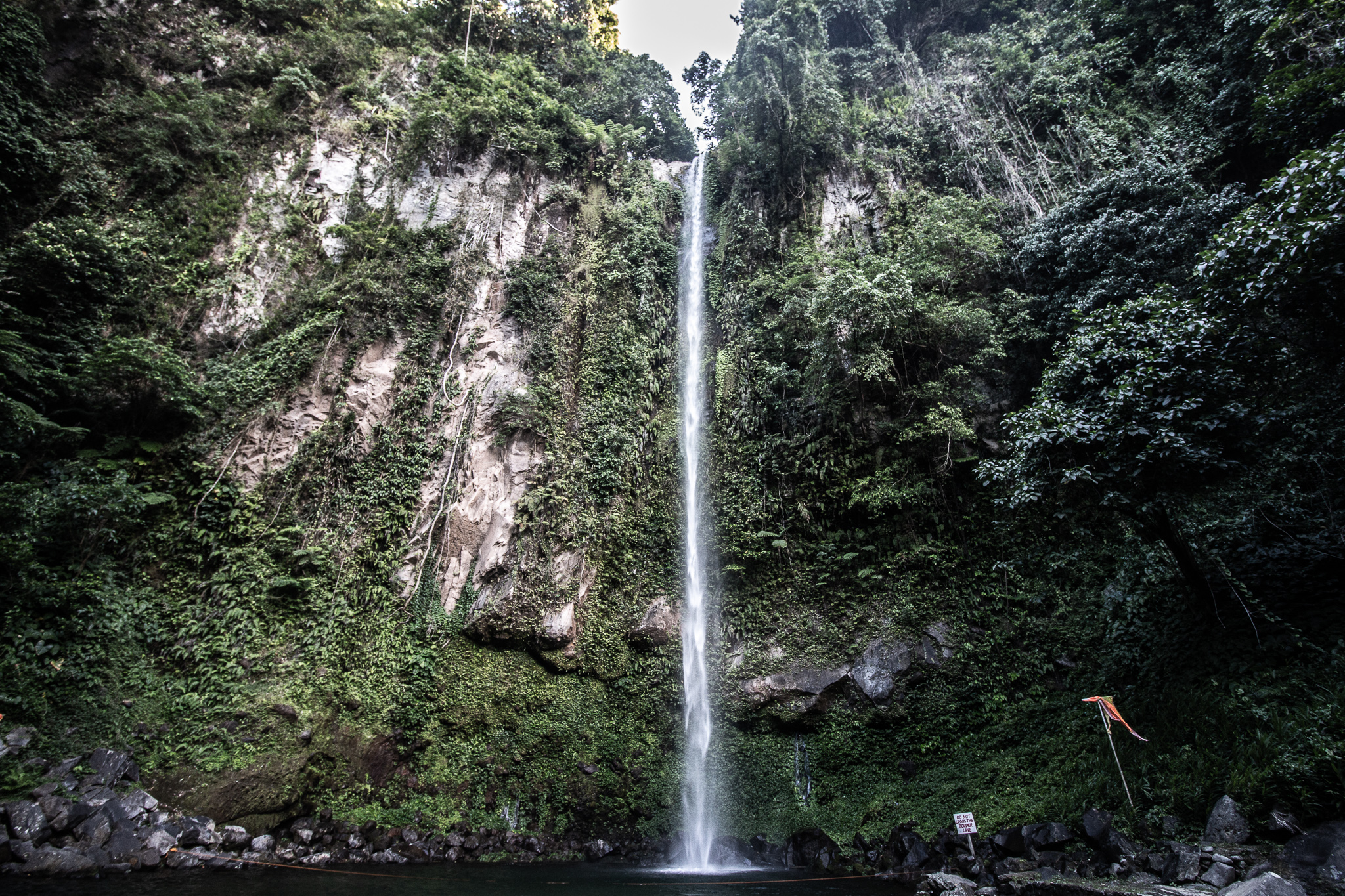 How to Chase Waterfalls on Camiguin Island

Camiguin is a beautiful, volcanic island of towering mountain peaks and lush green vegetation that is dotted with spectacular waterfalls. I was visiting from Northern Mindanao, just across the water to the south, to discover all that this island had to offer, and from sunken cemeteries to giant clam sanctuaries, this tiny piece of rock was proving to be a rather exceptional destination so far.

Now, I was chasing down the best waterfalls across the island, from the staggeringly high Katibawasan Falls to the beautiful Tuasan Falls, and the one in between that was so well hidden in the jungle that I couldn’t actually find it…

Here’s my guide to chasing waterfalls on Camiguin Island! 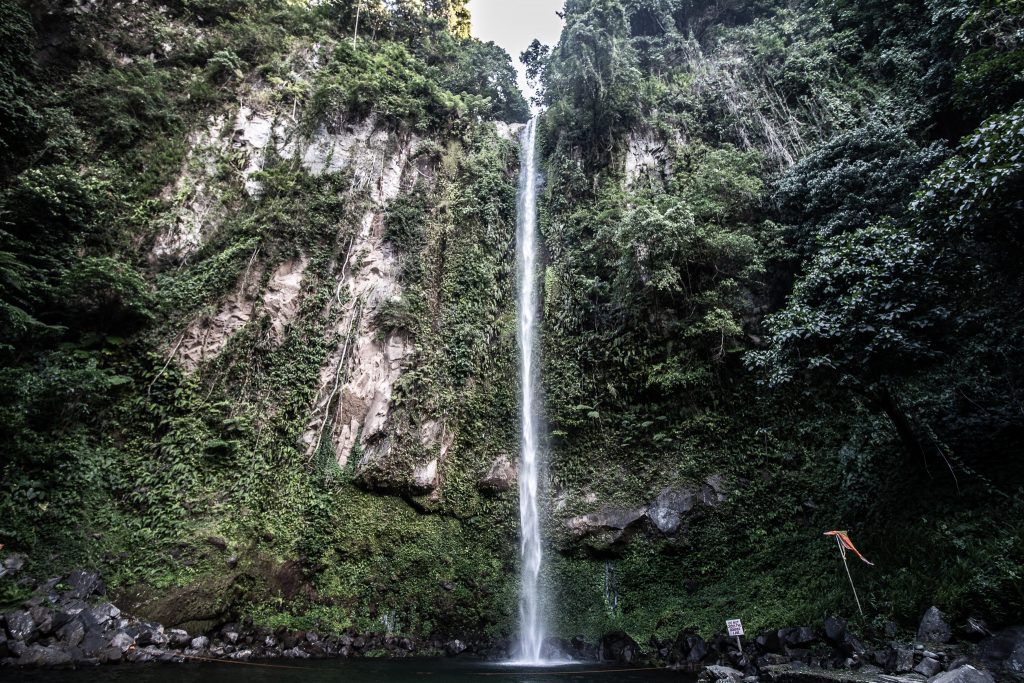 Katibawasan Falls is the most impressive of the three major waterfalls that are found on Camiguin Island. It’s a beautiful, towering, long drop waterfall that is surrounded by dense jungle and green vegetation, right under the shadow of Camiguin’s highest peak, Mount Hibok-Hibok.

After riding around the circumference of the island and then after missing the turnoff to the waterfall, going back on myself and eventually finding the entrance to Katibawasan in the jungle, I was more than ready for a refreshing dip in the plunge pool, especially in the sweltering, humid summer heat I found myself in.

Luckily, Katibawasan Falls is the best place to cool off in Camiguin.

I was greeted by the spectacular sight of the 70-metre waterfall powerfully cascading over the edge of the cliff and into the pool of water far below. I went straight into the water, and it was gloriously refreshing and cold.

Katibawasan Falls is one of the most impressive waterfalls I’ve ever seen in the Philippines and yet here I was with few other people around. It was an incredible experience! 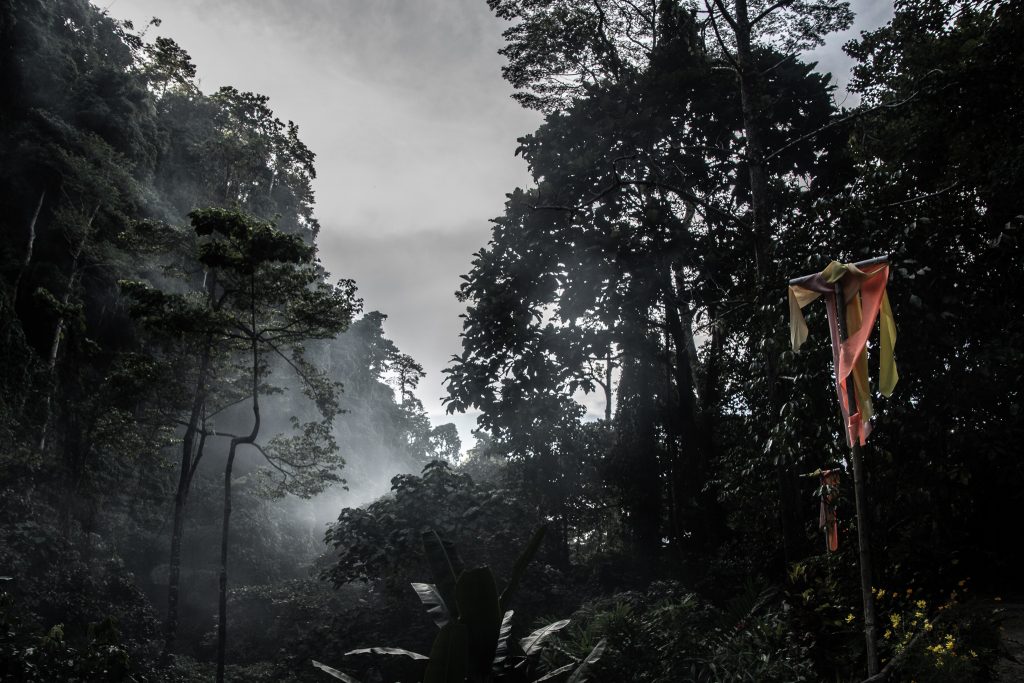 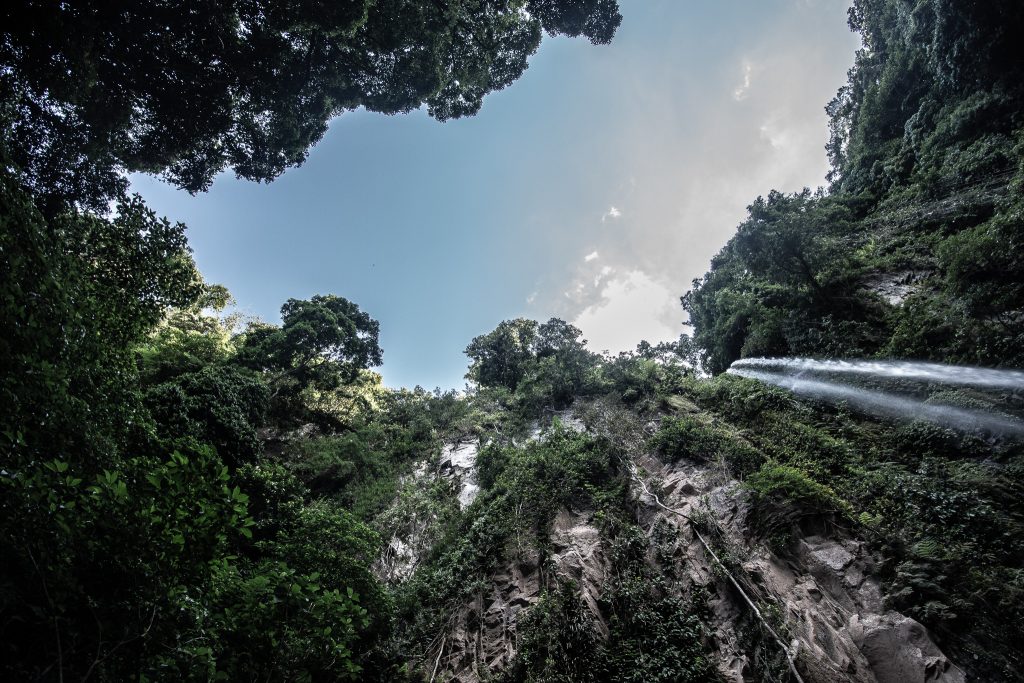 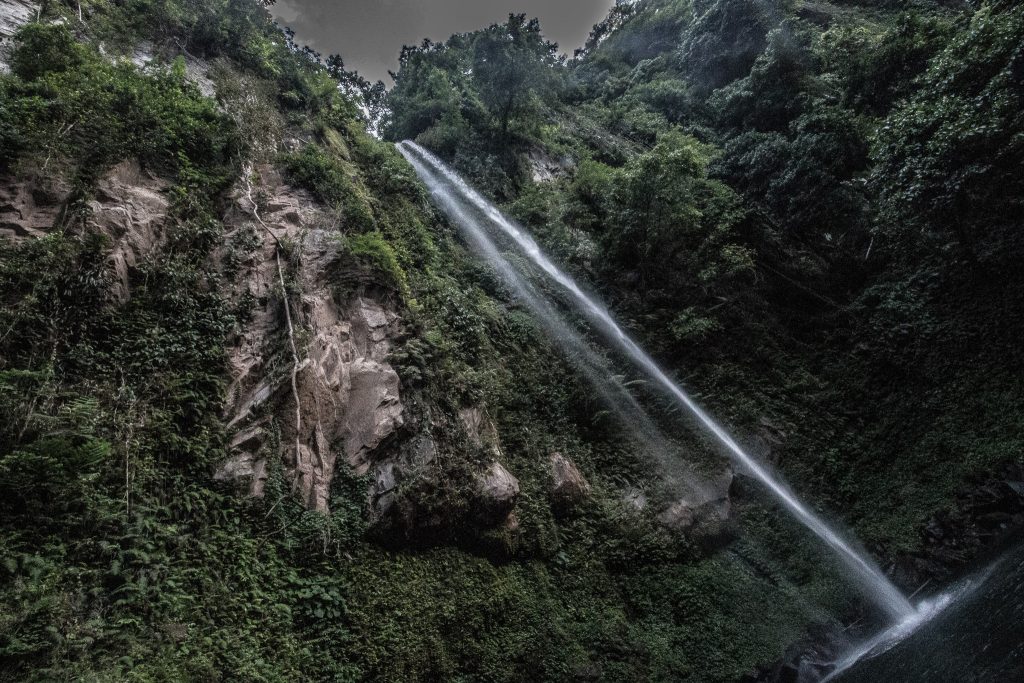 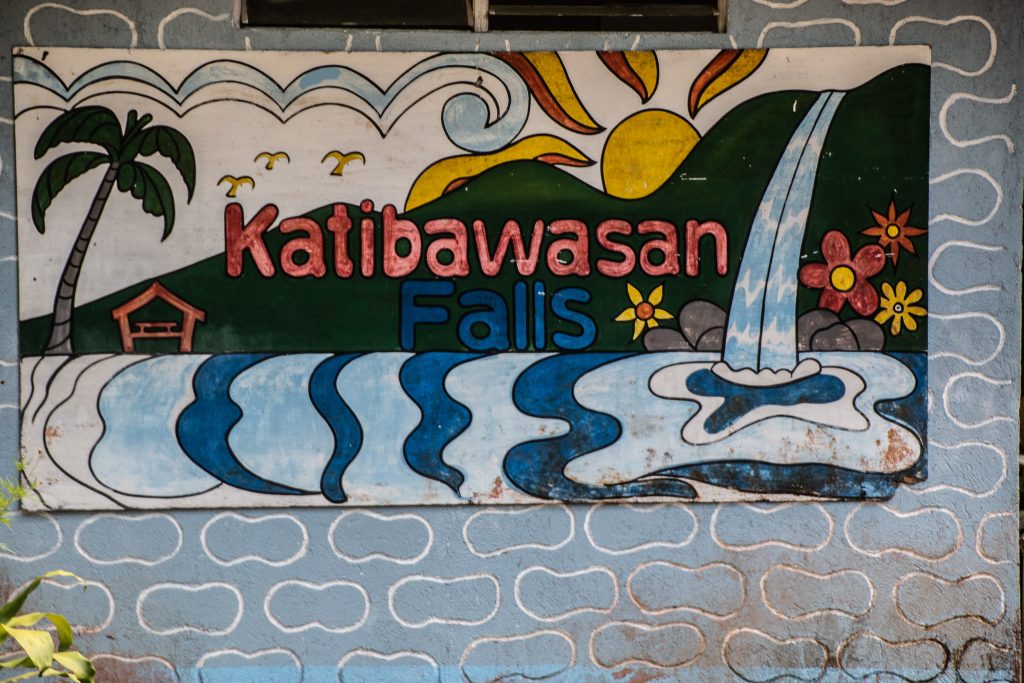 Location of Katibawasan Falls in Camiguin

Katibawasan Falls is found on the slopes of Mount Hibok-Hibok, in the dense interior of Camiguin Island. There’s one main road which traverses the entirety of the island, however, this coastal road doesn’t ever move inland, and finding the correct side street to take to the waterfall can be quite confusing, as there are rather a lot of them, all leading to any number of small villages or random tourist attractions.

The turnoff is located just south of the main town of Mambajao, and from here it would take only twenty minutes to travel by bike or car – if you know where you are going. There seemed to be a rusty old sign on the turnoff when coming from the direction of Mamabajao, but I was travelling from the southern side of the island, and I completely missed it the first time around! Once you are on the correct turn off, however, it’s a straight drive up to the entrance.

Hiring a driver from Mambajao or nearby would cost around 300 PHP return for a few hours just to reach the Katibawasan Falls.

There’s a small 50 PHP per person conservation fee, which is payable to the staff member on the gate and there are a few stalls selling souvenirs and snacks. Try the local delicacy that’s made from Cassava, flattened into a pancake-shaped treat and then covered in a sweet, sticky sauce. The locals call it Kiping and there is, for some reason or other, a lot of it for sale outside of the Katibawasan Falls. I saw a few locals stocking up on this surprisingly tasty snack and taking bags of it down to the waterfalls to fuel their swimming and lounging in the water. A delightful little treat by any Filipino standards! 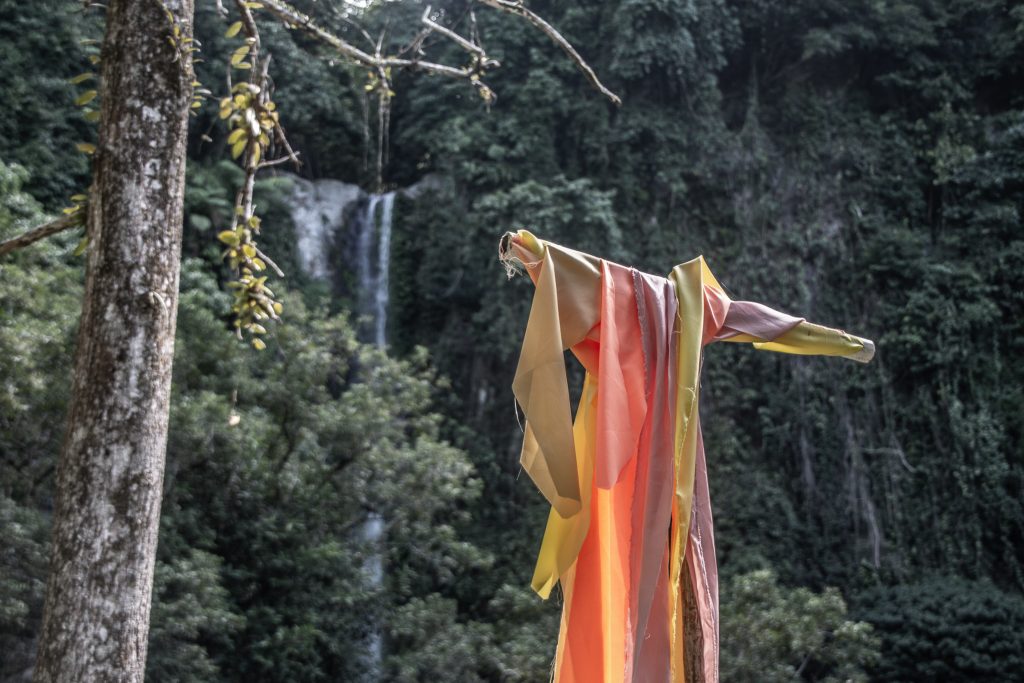 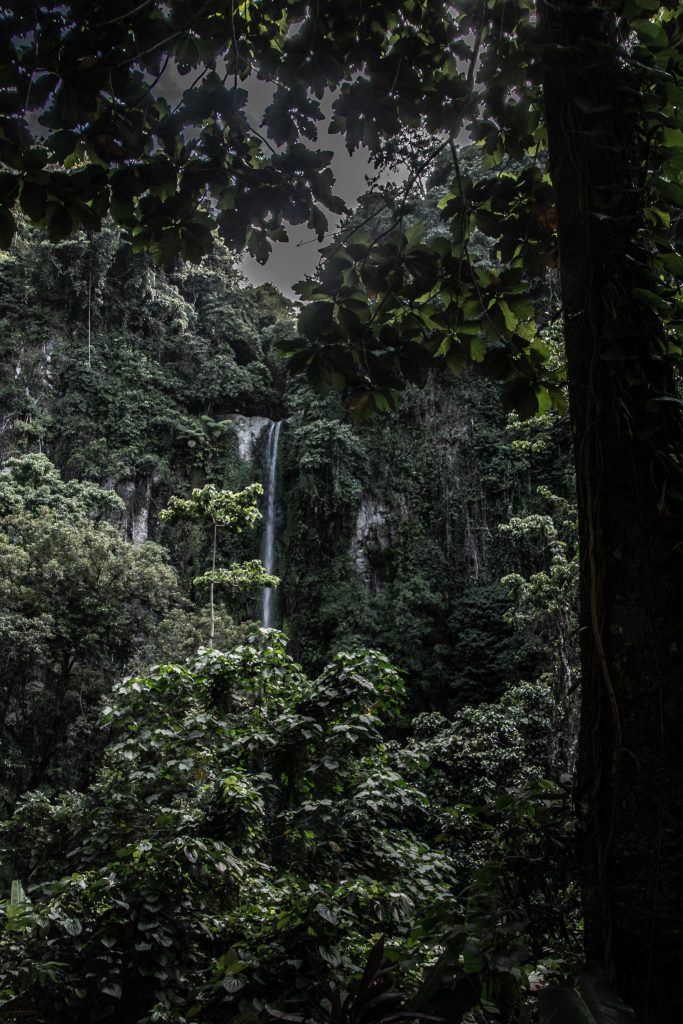 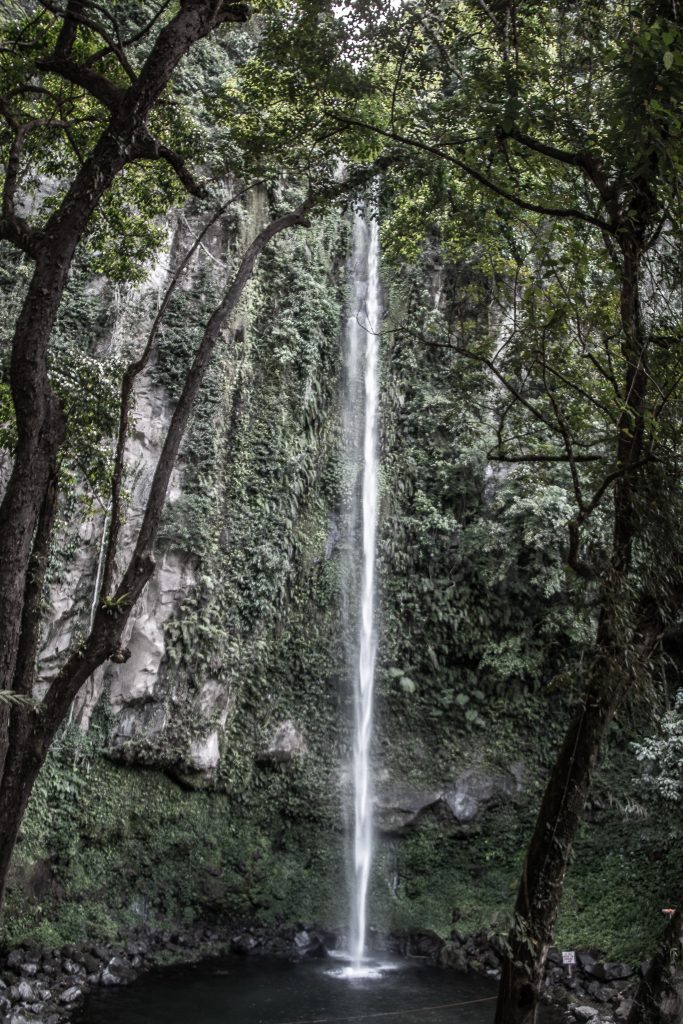 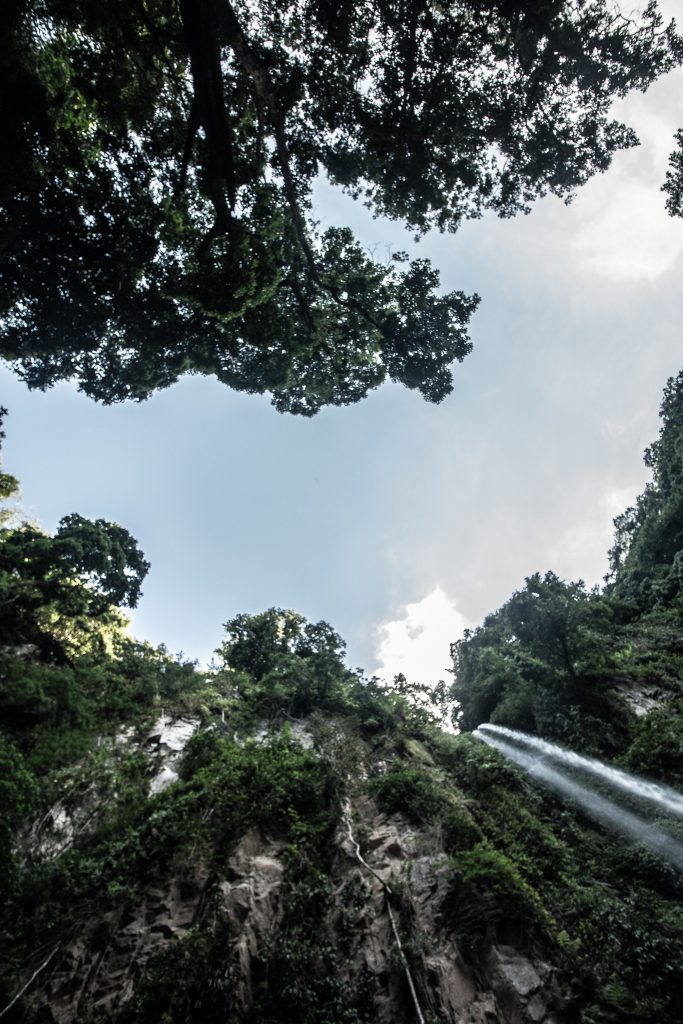 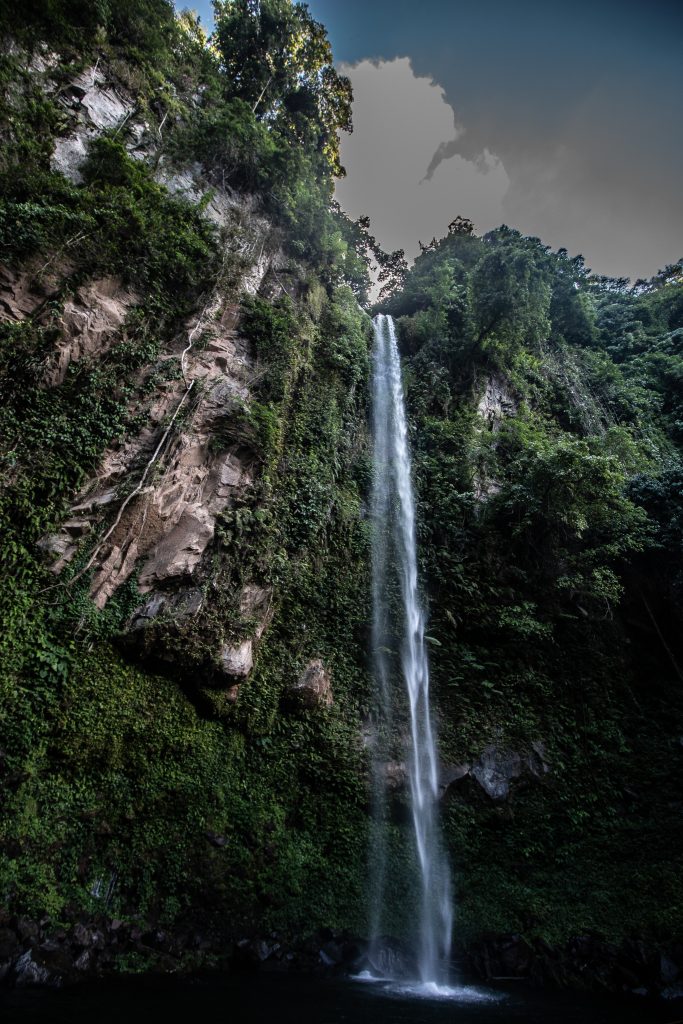 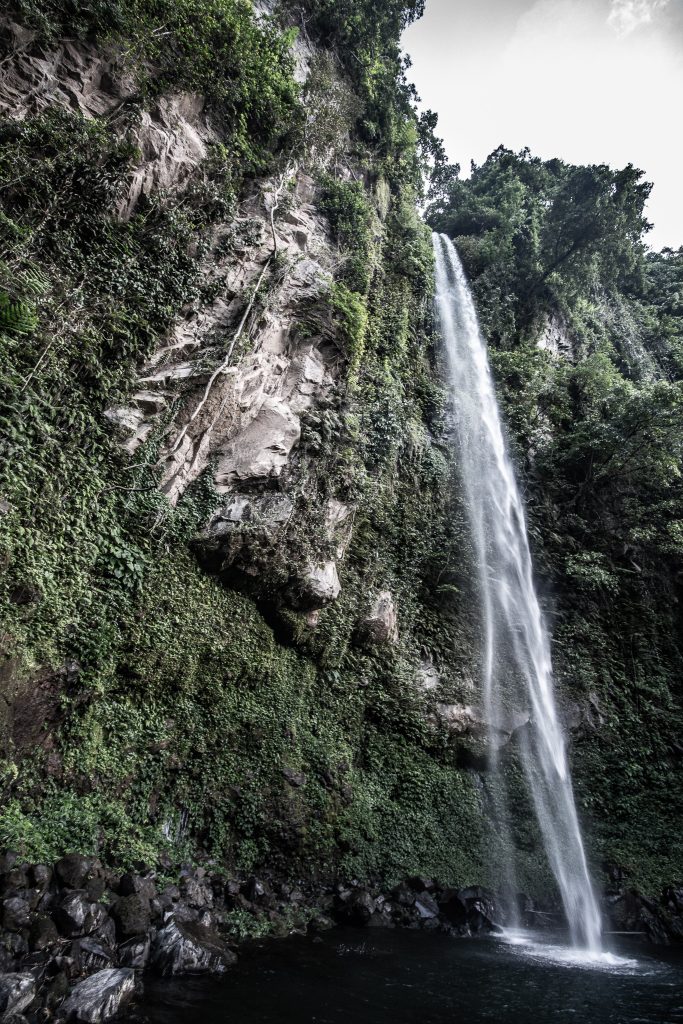 After seeing the glorious Katibawasan Falls, nothing much else was going to beat that particularly magnificent and downright staggering waterfall experience.

Tuasan Falls was the next waterfall I was chasing, and it turned out to be impressive in its own right, but – I’ll be honest guys – not quite as dramatic. It’s not quite as tall, but that means it’s possible to get closer to the splash zone safely and lots of locals and tourists were enjoying the refreshing water, more so than at Katibawasan Falls.

Of all the Camiguin waterfalls, my personal favourite will always be Katibawasan, however many of the Filipinos I met on the island seemed to think Tuasan was the best! What do you think? Let me know in the comments below! 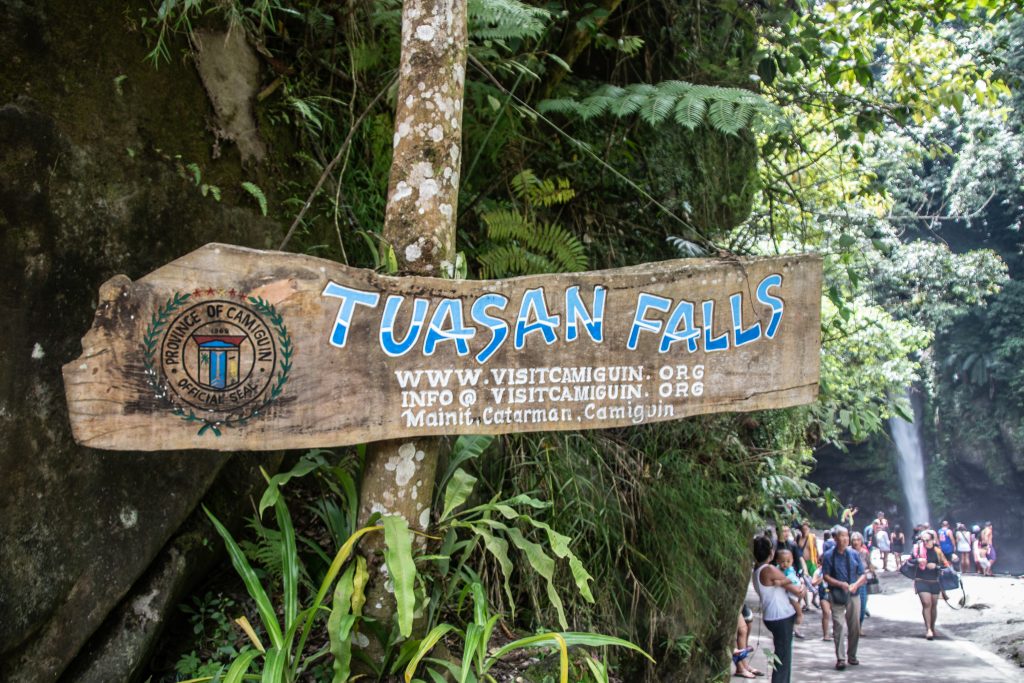 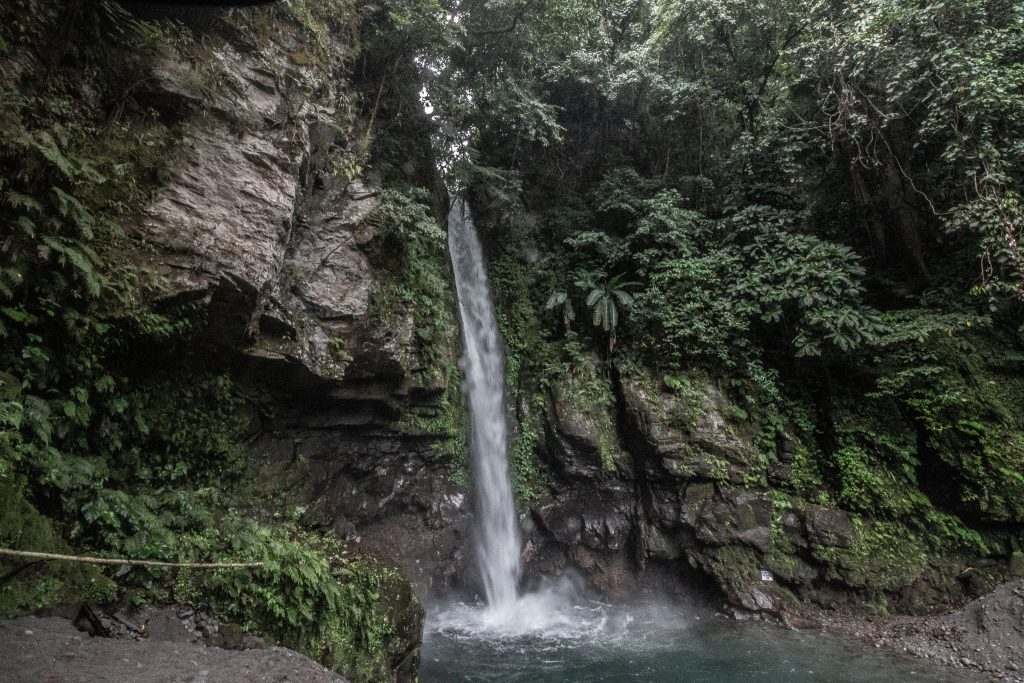 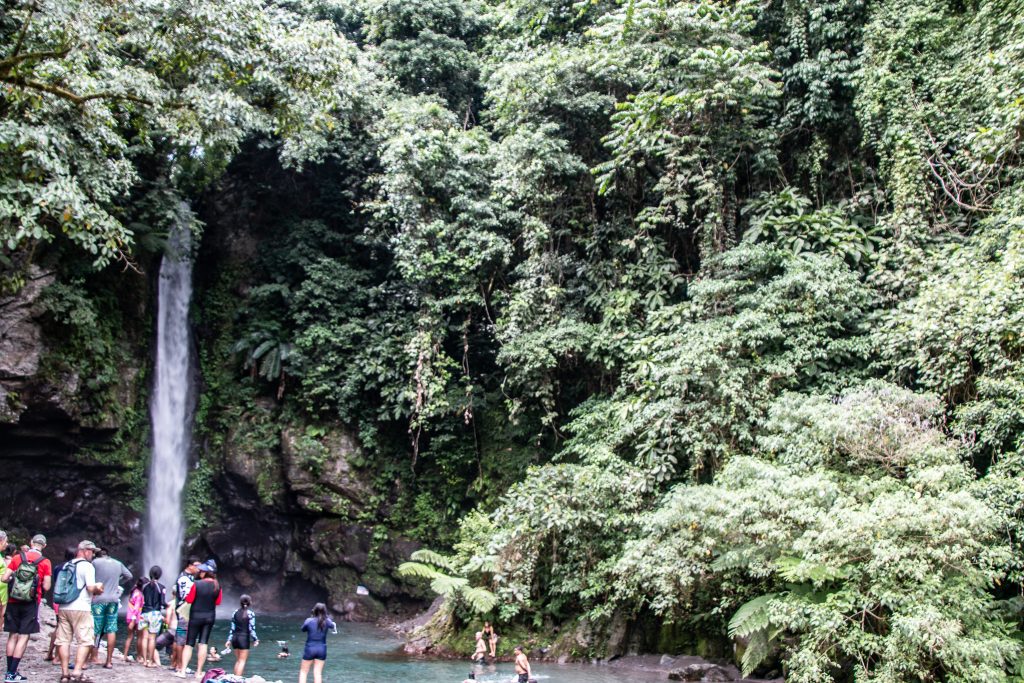 Location of Tuasan Falls in Camiguin

Tuasan Falls was easier to find, despite the fact that it was further away from the main centre of Mambajao and quite far into the mountains. Still, it should only take 45 minutes of driving to reach it from the tourist centres on Camiguin. I road by motorcycle, and followed the ring road until I saw the sign for Tuasan Falls, then followed the road quite far into the jungle. Keep going and don’t stray, even if it feels like you are going too far. Eventually, the road opens up to reveal a large, hidden valley, and at the end of the valley across a rough, dirt track that they are currently paving, is the waterfall.

Hiring a driver to take you here would probably cost around 500 PHP return from Mambajao, but travelling over to this part of the island, it’s best to combine a trip to Tuasan with trips to other sights, such as the Sunken Cemetery.

You will have to pay a small 50 PHP entrance fee, walk along a short path, and you are in. It’s fine to swim in this waterfall as well, and the water is rather refreshing too. 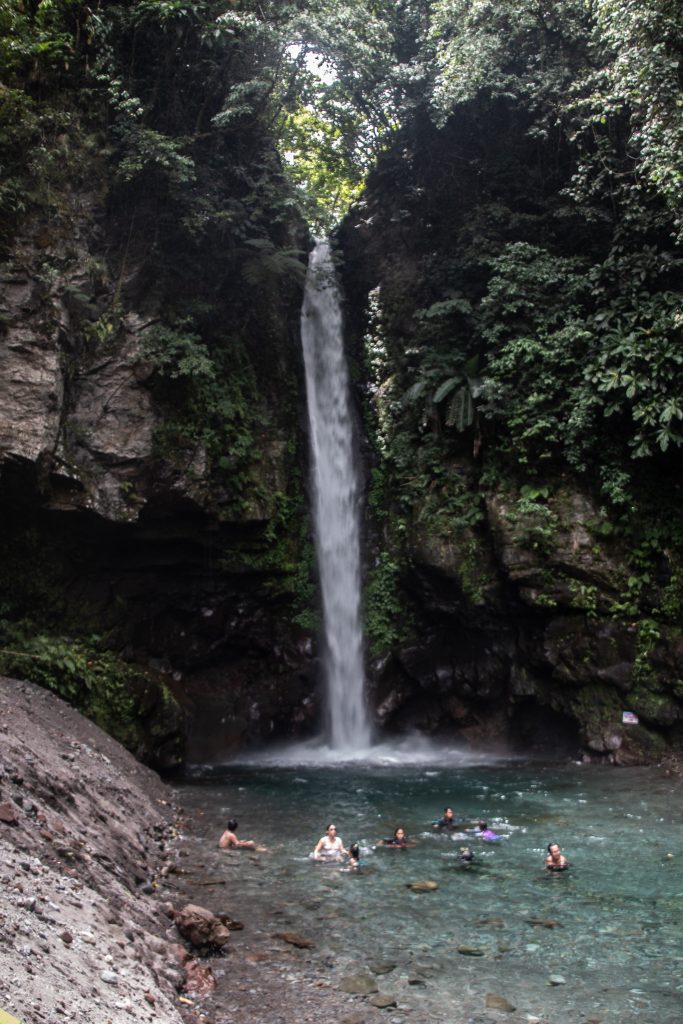 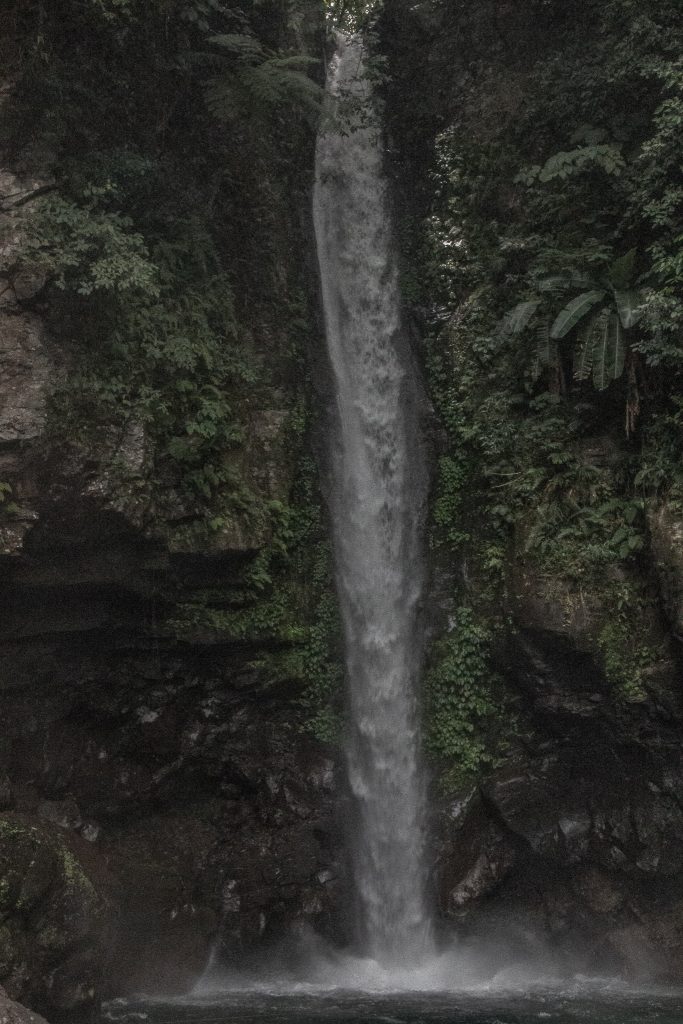 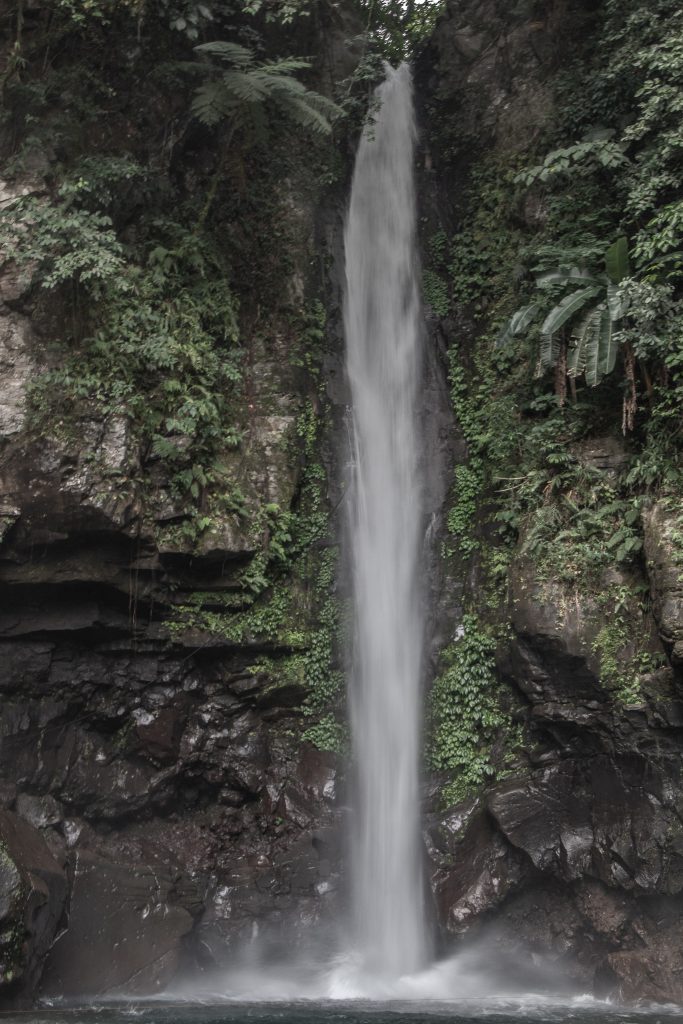 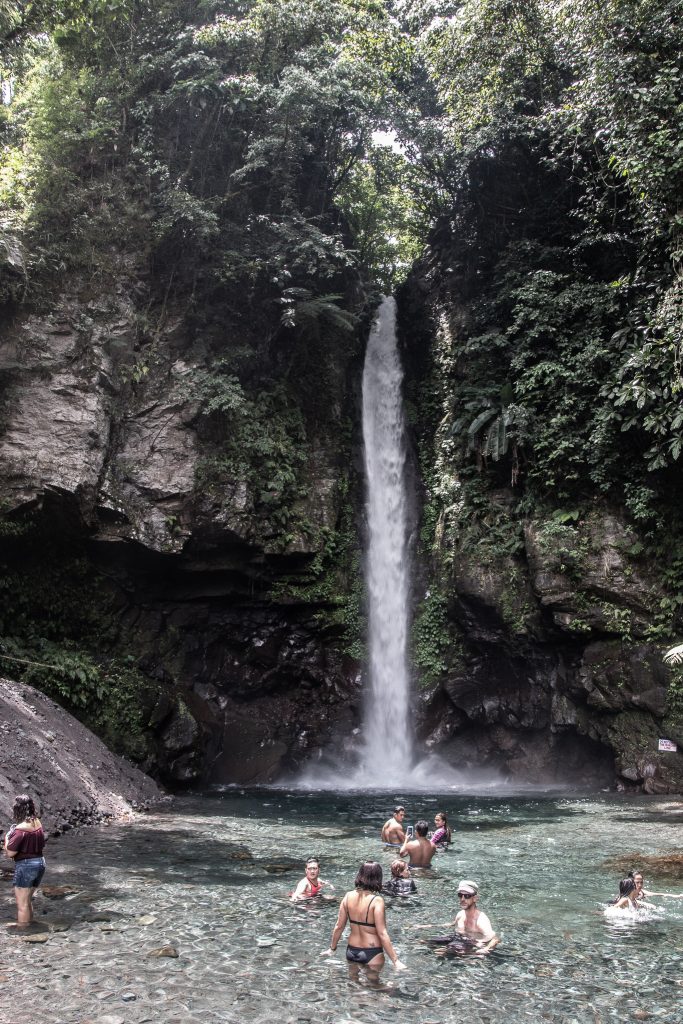 Binawangan Falls was the third waterfall on Camiguin Island that I was attempting to chase and find. Unfortunately, after a lot of chasing, I still hadn’t found it. And eventually, I had to give up before I was successful.

Binawangan is in the southern part of the island, and a long, steep and spectacular road leads up into the mountains from the coastal road. I followed this all the way to the top, as directed by signs and google maps, but eventually, after half an hour of uphill driving, the road simply ended.

That was it. There were no more signs, there were just a few rough footpaths heading out into the bushes in several directions. A few locals were chopping wood along one of the footpaths and they waved me vaguely along another path.

Still, I couldn’t find it. Binawangan was proving elusive. I tried to use the rough directions I had on the map to pinpoint its location, but I was led just to a sheer vertical cliff face that looked far too sketchy to climb. It was the middle of the day. It was hot. I was slowly feeling the heat and I soon decided to turn back. There were just too many options to choose from.

With a heavy heart, I turned around and drifted down the steep hill on the motorcycle, enjoying the beautiful views out over the mountains and the ocean.

When I returned to my guest house later in the day, the owner said that Binawangan Falls was a tough trek that really required a guide to reach it, especially if I had no idea where the hell it was in the first place.

To this day I have no idea what the waterfall really looks like. If you have successfully made it to Binawangan Falls then I would love to see a picture, to prove that it truly does, actually exist and it’s not just an elusive local legend made up to confuse tourists like me… 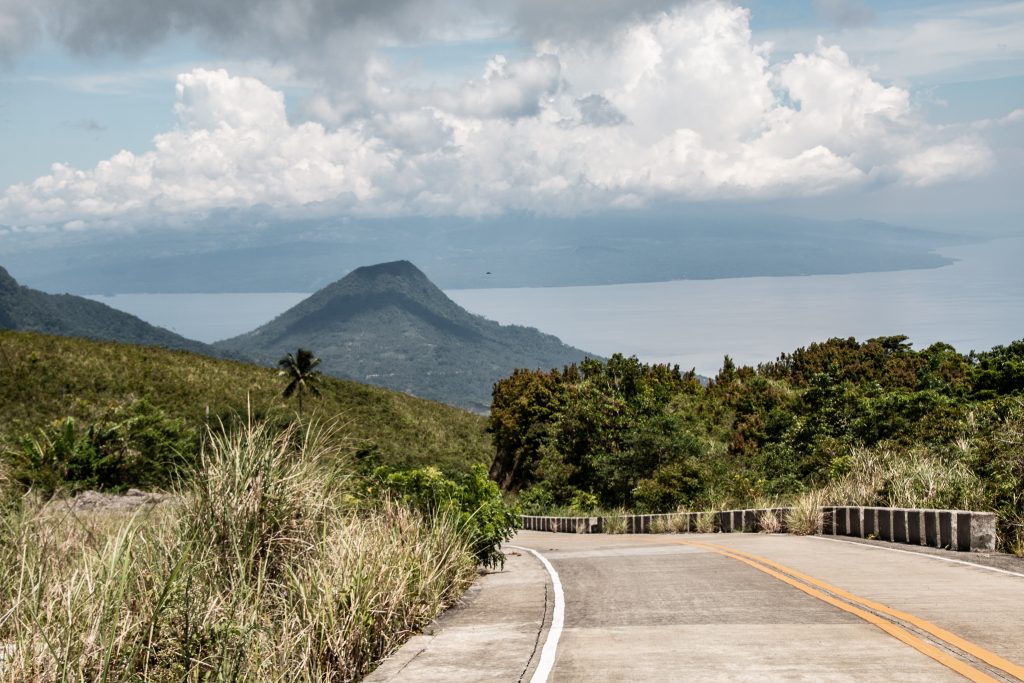 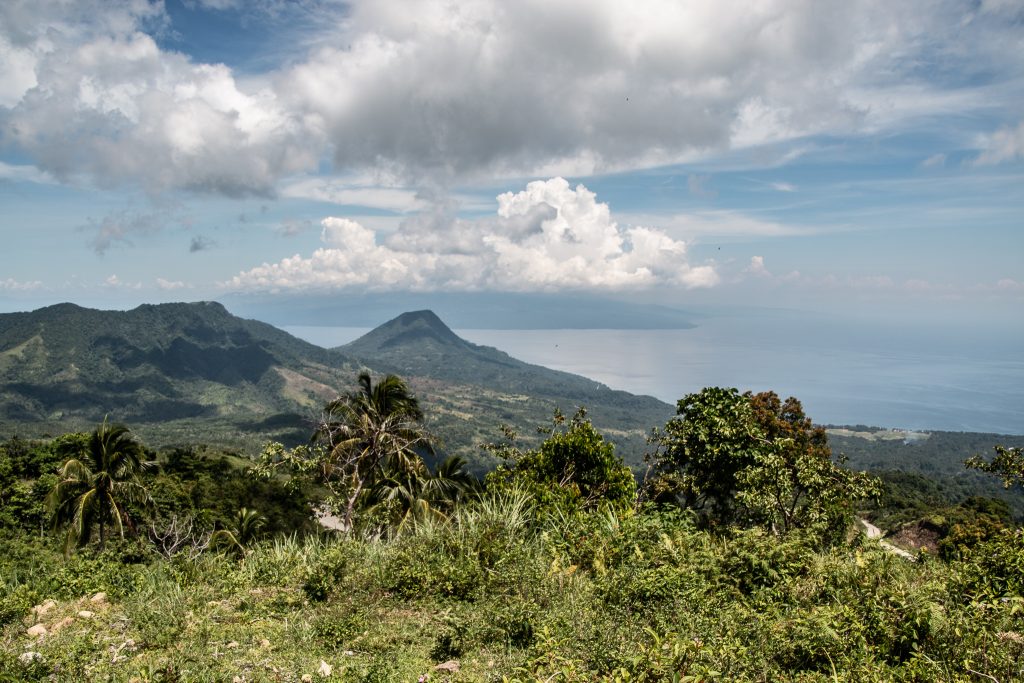 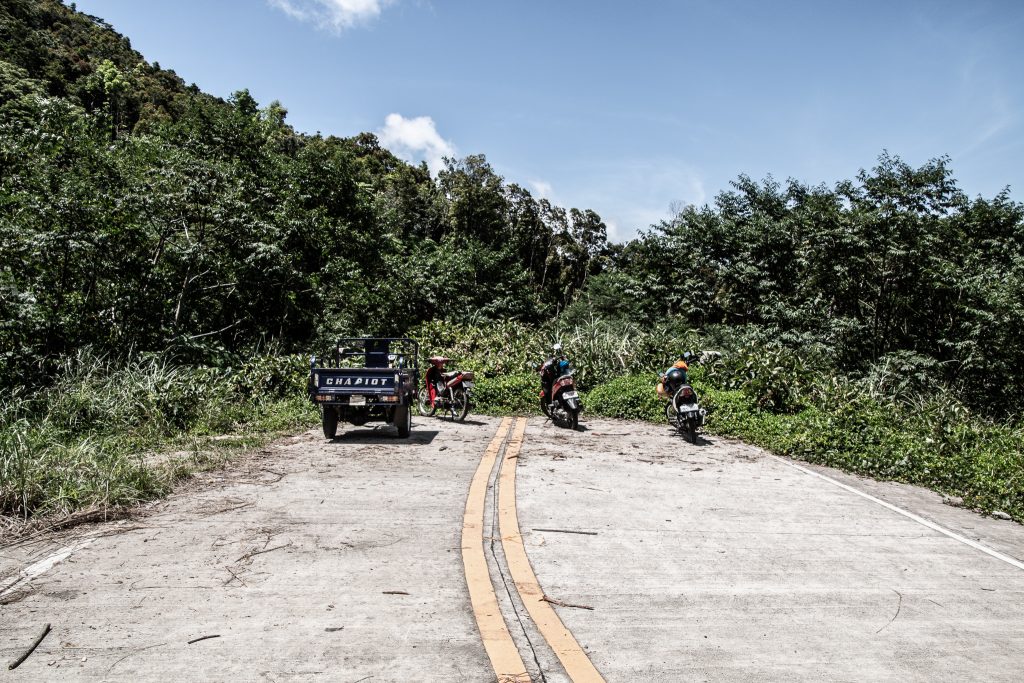 Location of Binawangan Falls in Camiguin

You can supposedly find the Binawangan Falls on the southern end of Camiguin, signposted, at the top of a steep mountain road, however, once you are there at the end of the road, it’s not easy to find. If you hire a driver, you could also ask if they know where it is and can lead you there, although the hike is potentially very strenuous and long. I had heard that occasionally there are a few locals at the top waiting to find work as guides, but there was no one when I arrived.

The closest location you can find is on the map below, but who knows if this waterfall even really exists?!

Disclaimer I was hosted by Medano Island Resort as part of a complimentary 3-night stay on Camiguin Island.